The project "Sound Stories" was created during a two week collaborative Sound Design project between interaction and product design students.

Children are considered to be very carefree, but they also experience worries that can be stressful for them. For example if they had a fight with a friend or a change in their environment, like moving to a new city. Media and technology also often have a bad effect on kids. With this project we wanted to support children in those situations.

Our research showed that there are different ways for parents to help comfort their child such as spend time with them, listen to them and build daily routines. This inspired us to design a concept that strengthens the relationship between parent and child and gives them a daily routine together. We wanted to create a moment of comfort and bonding between parent and child to cope with their daily worries to unwind and relax at the end of the day. We started by asking the question "How can we design a creative experience in which a parent gives full attention to the child and together create stories, using sounds in a relaxing way?"

This resulted in the design of a story telling tool which helps parents and their children to create stories together. The device consists of a dial and character cubes with a built-in speaker. The experience of Sound Stories is turned on by turning the dial, where the user can choose from a variety of ambient sounds which create the environment which the story is set in. This sound is played through the built-in speaker. Other elements, such as characters, objects or activities can be selected by placing cubes into the device while making up the story. When a cube is placed the sound of it starts to play in the background. As soon as the story time is over and it is bed time the parent can set a timer which makes all cube sounds fade out slowly. Only the environment ambient sound, which is inspired by nature, will continue while the child falls asleep. 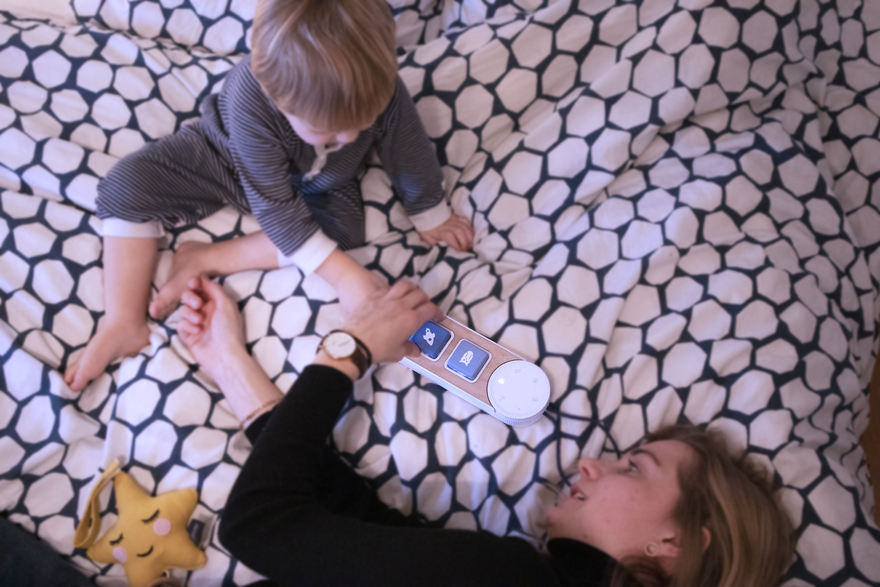 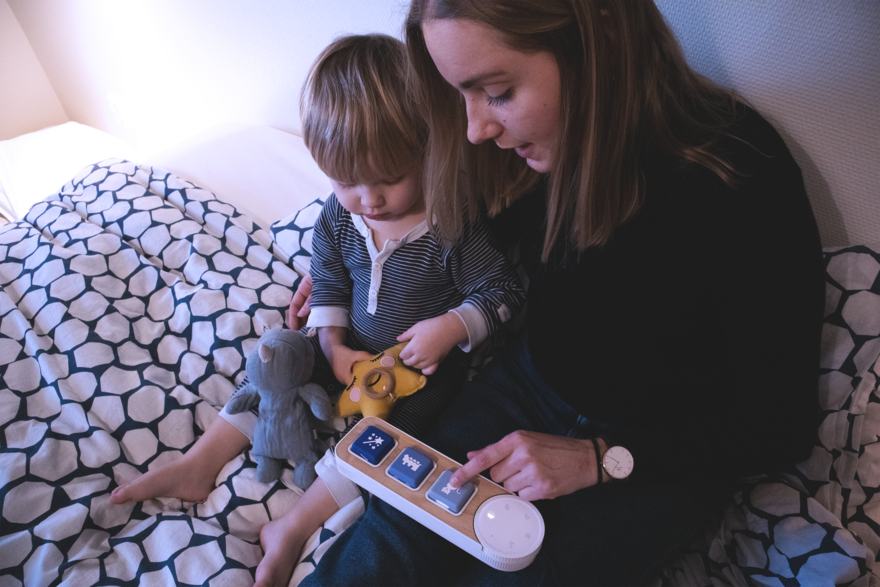 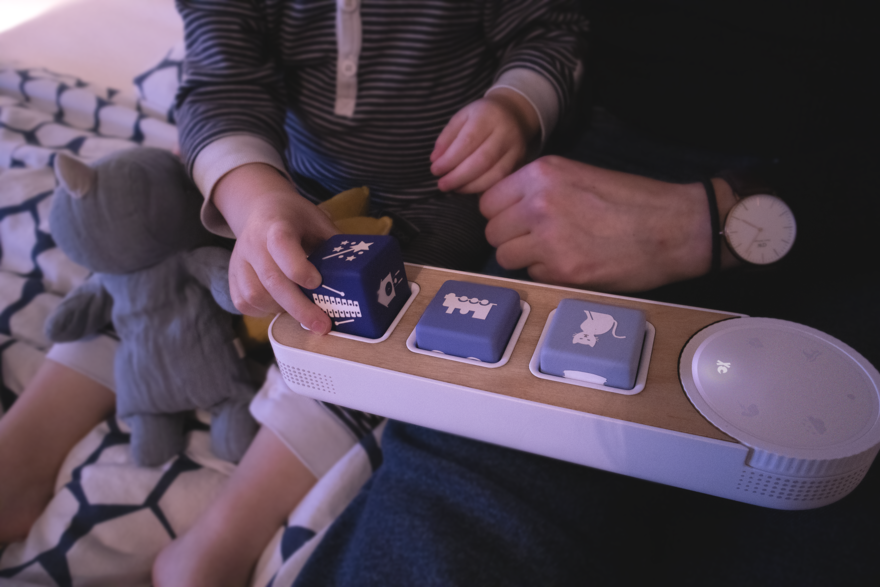 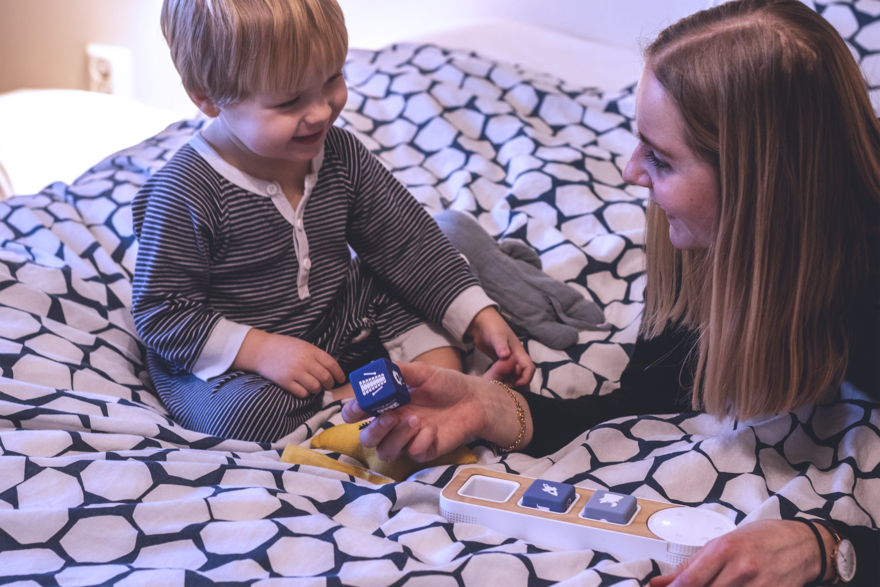 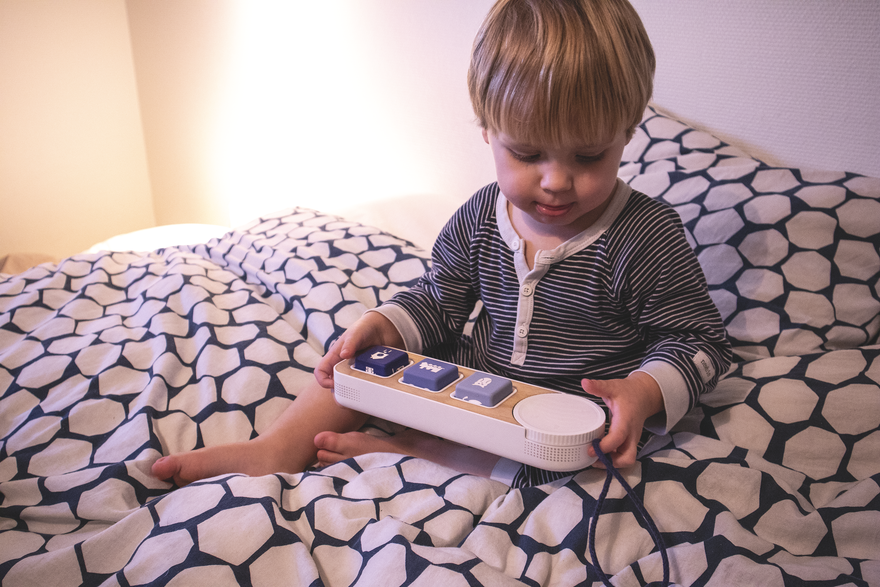 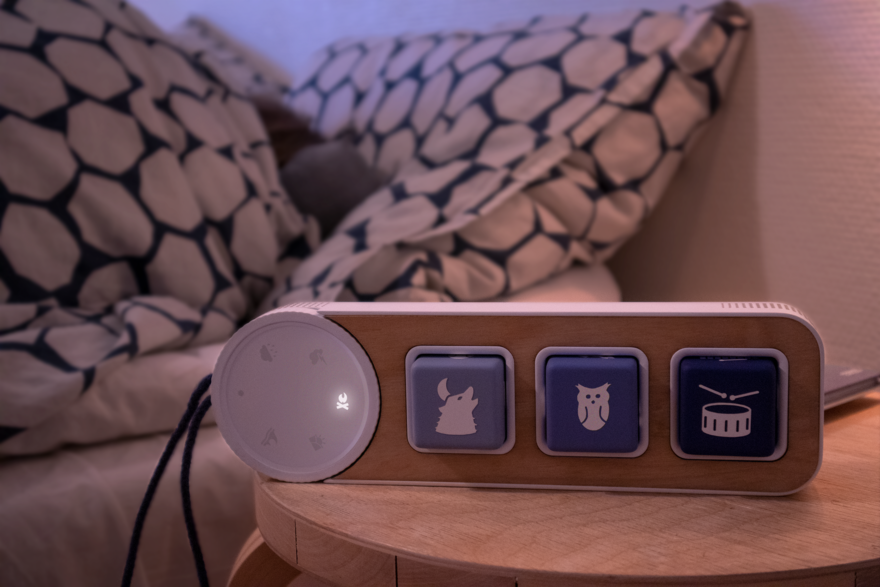 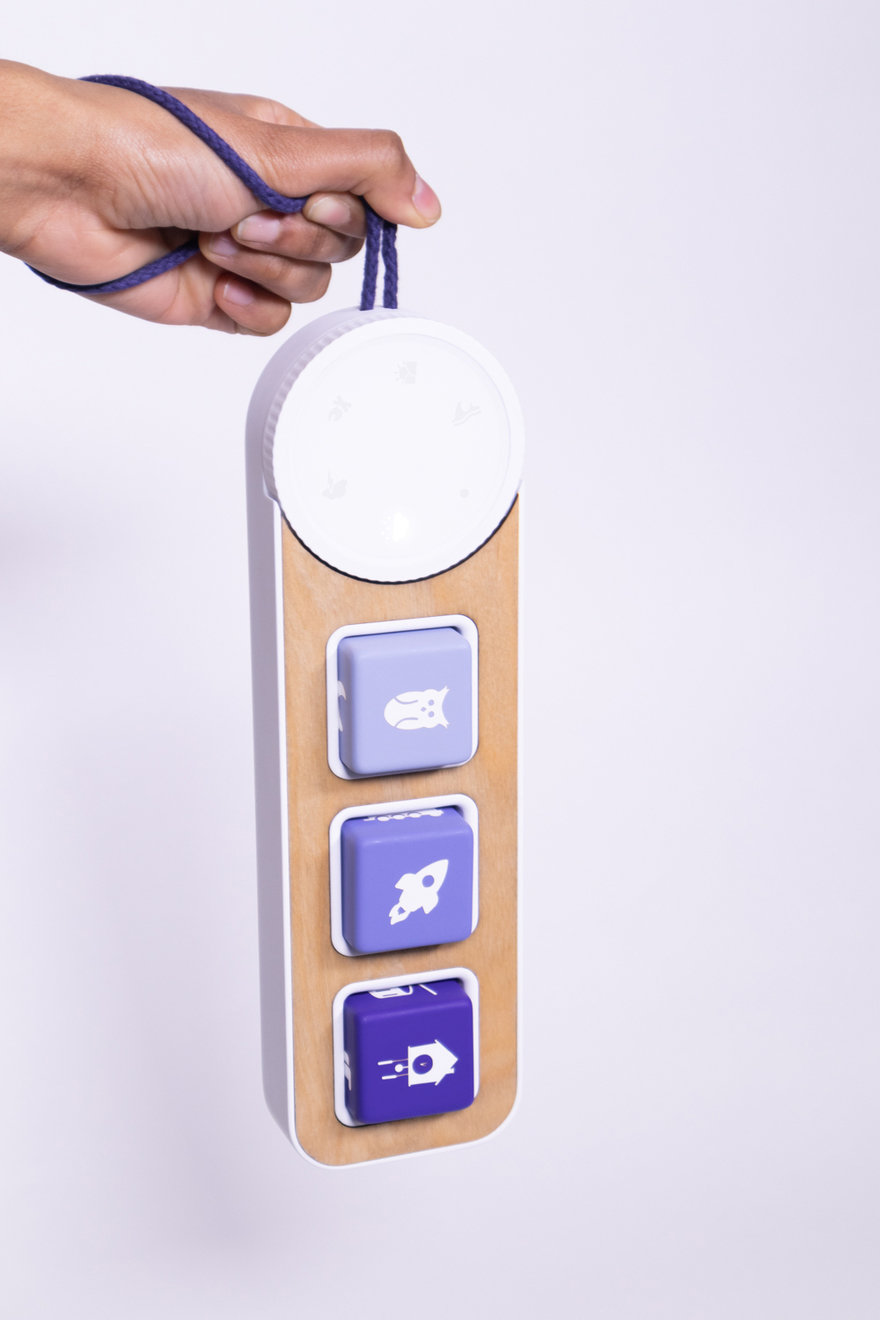 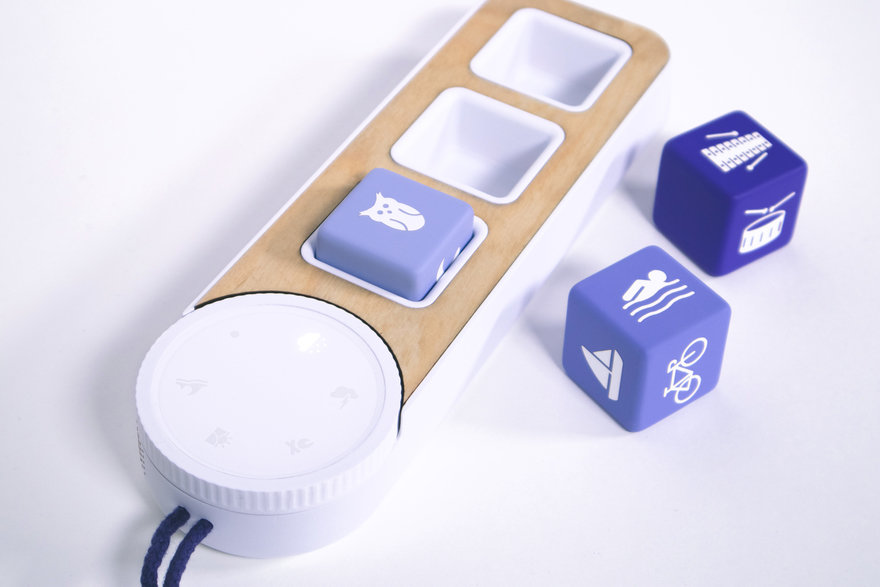 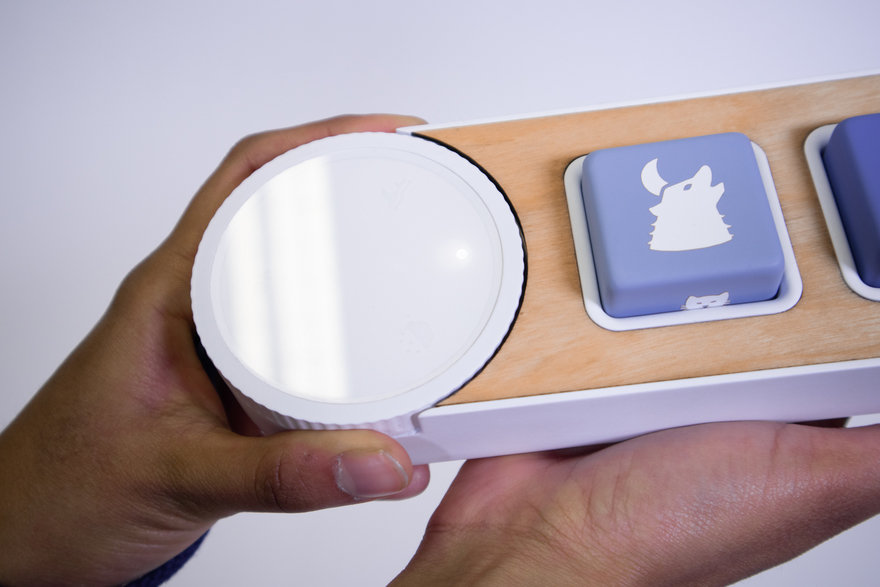 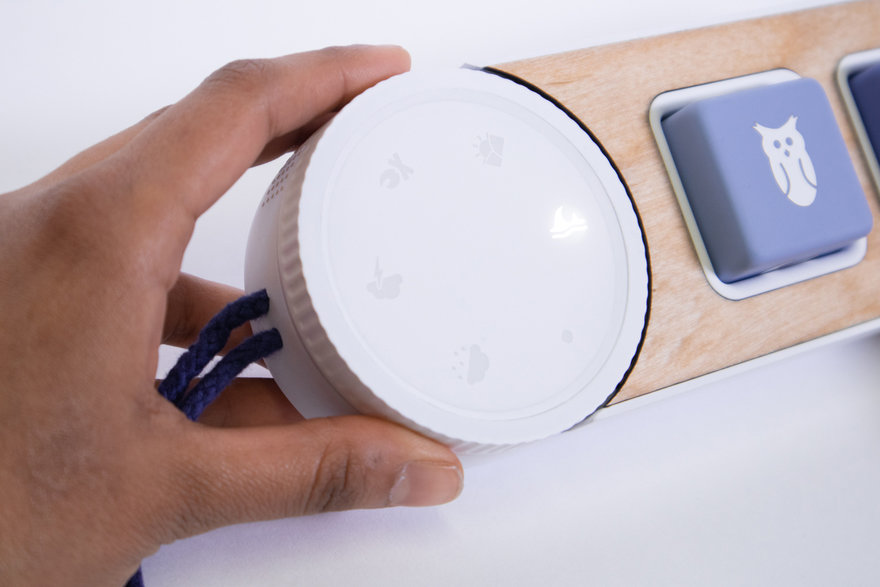 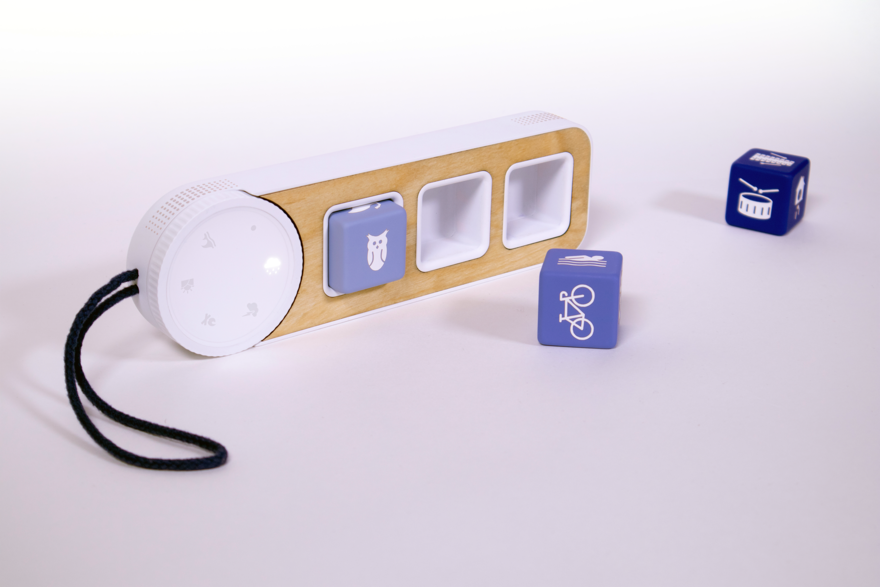 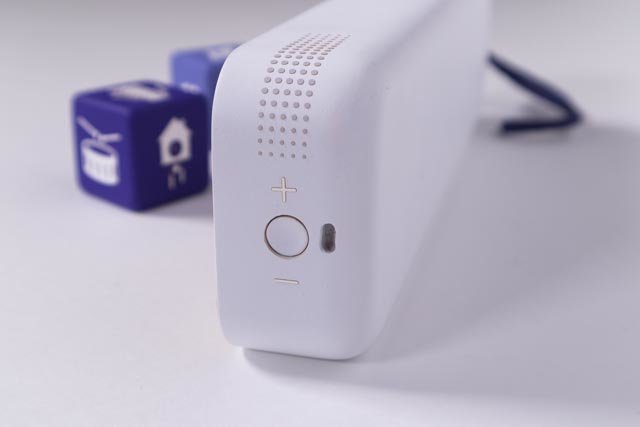 We designed a story telling tool where the parent gives full attention to the child and together they create stories, using sounds in a relaxing way. We call this concept Sound Stories.

The concept of "Sound Stories" is to help enhance the experience of story telling while it helps children refocus and become calm as they prepare to go to bed. Sound Stories can be used as a trigger to create spontaneous and imaginative stories. It simplifies and improves the relaxing bedtime story telling for the child by giving the user inspiration of what the story can be about. Sound Stories provides the opportunity for the user to choose an environment, character, activity and object from the cubes to build a story, a story with sounds.

Spending time with children and listening to them is a proven method to calm down and relax. Moreover these kinds of activities are meaningful to their growth and create a stronger bond between parent and child for the future.

Nature sounds and green environments have been linked with relaxation and well-being for hundreds of years. Often sounds of rain and water are used as sounds that promote sleep. Due to this we felt it was important to include the sound of nature in some ways in the product.

During the research phase parents told us that they often spend time with their children before going to bed by tucking them in, talking to them or telling them stories. They use different tools for this. Sometimes they read, listen to audio books or even do a little role playing with their children. After a long day some parents struggle to come up with their own made up story and resort to reading books to make it easier for them. To encourage a creative moment for the parents we looked into how a story is built. Through that we realised that stories can be split up in basic elements such as an environment, where the story takes place, characters, activities and objects. Creating an open ended platform for story creation would help parents to come up with a story together with their child.

Sound Stories is turned on by pressing a button on the side of the product. When pressing the ON button the user gets feedback by playing a magical sound, that is designed to give the feeling of opening the doors to a new magical world.

Once the product is turned on the first step is to create the ambience for the story to be set in. The user can rotate the dial to choose from various nature sounds like rain, a fire place, meadows etc. Once the environment is set, a character for the story can be chosen on the character cube.

On placing the cube in the slot at the board the sounds of the character will start playing. At this point the parent and child narrate the stories with the sounds in the background. The user can tap a cube to momentarily hear that sound louder again. The same procedure is done for the activity and object cubes.

Nature sounds are known to calm the mind and relax. As soon as the story telling time is over the parents tugs the child in, places the device on the night desk and presses the timer button. The timer button function lets the character, activity and object sound fade out, for the ambient nature sound to be left, which is a great support to help the child fall asleep.

Sound Stories is a an opportunity for children and parents to be creative together and bond more after a long day. It is a calm experience through which kids can relax to ambient nature sounds as they are about to sleep. The sounds remind them for example of the story they just were told and gives them time to refocus, reflect and process the day. The ambience of the story echos in the background while they fall sleep.