We set out to design a product that allows everyone, but especially elderly and less able patients, to urinate comfortably whether standing or seated and gives them the independence and dignity of being able to manage this without the need for help from a carer.

Releaf Freedom is a portable urinal that makes life more comfortable and less stressful for the estimated 423 million people who suffer from urinary incontinence - allowing them to never be more than an arm's length from a toilet. The carefully designed top surface creates a leakproof seal for any adult, even while seated. A large handle makes it easy to use alone, with help from a carer, one handed, and for those with other conditions like arthritis. Unlike its fully disposable competitors, Releaf Freedom uses a unique mechanism that enables the handle to be re-used and the bags detached for hygienic storage or disposal.

The device is indicated for use by adult users, in particular those with limited manual dexterity, physical mobility and/or vision. It is intended as an alternative to, or to complement absorbent products, bedpans and urinal bottles. 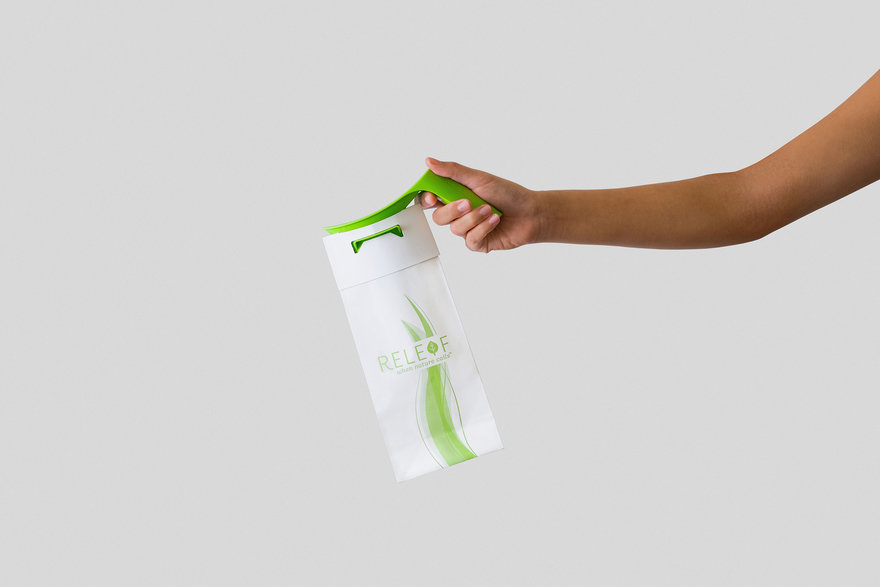 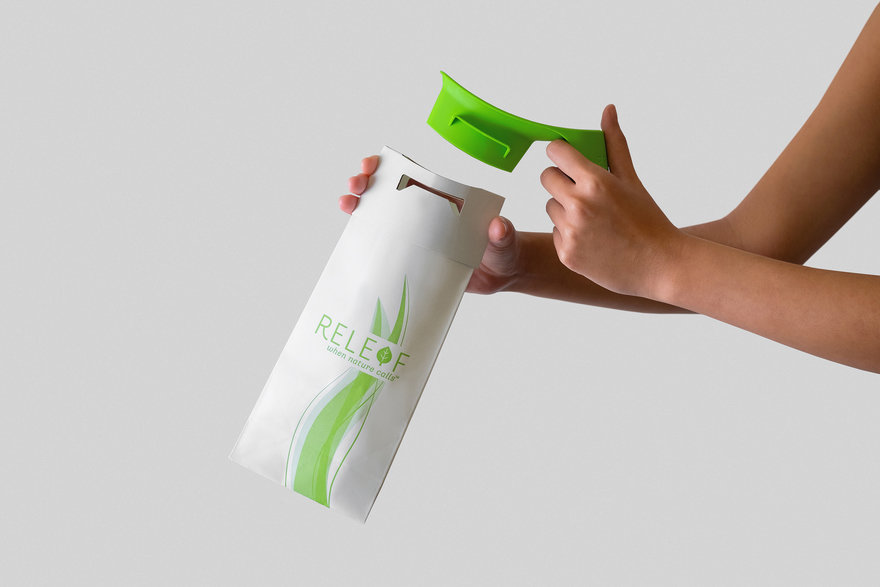 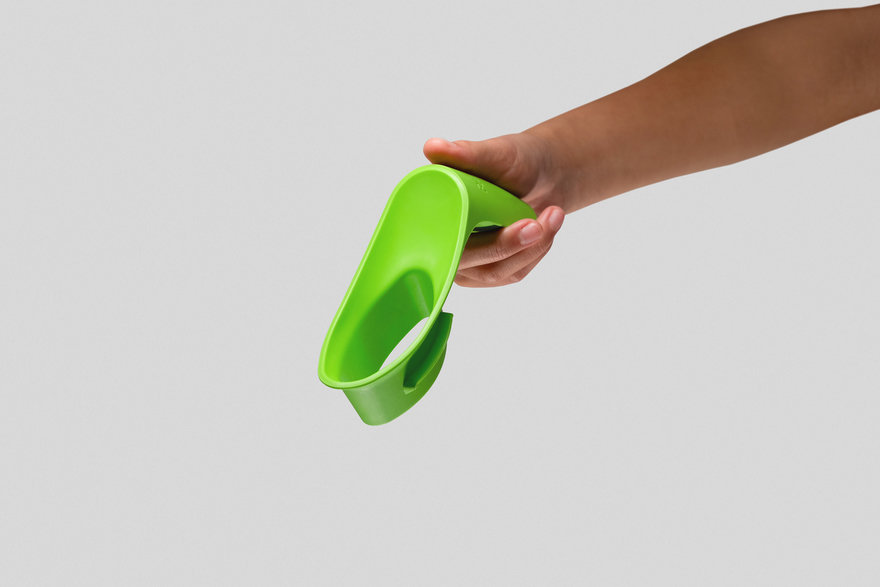 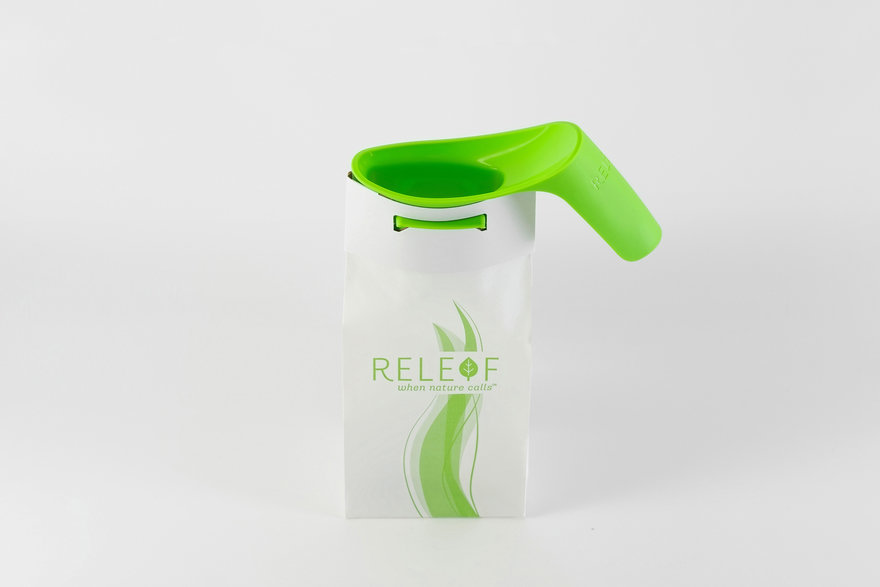 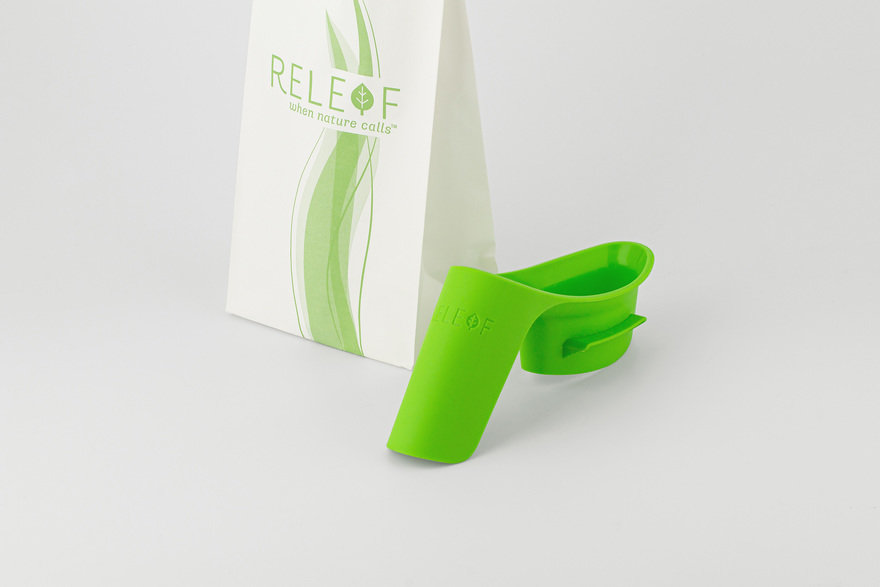 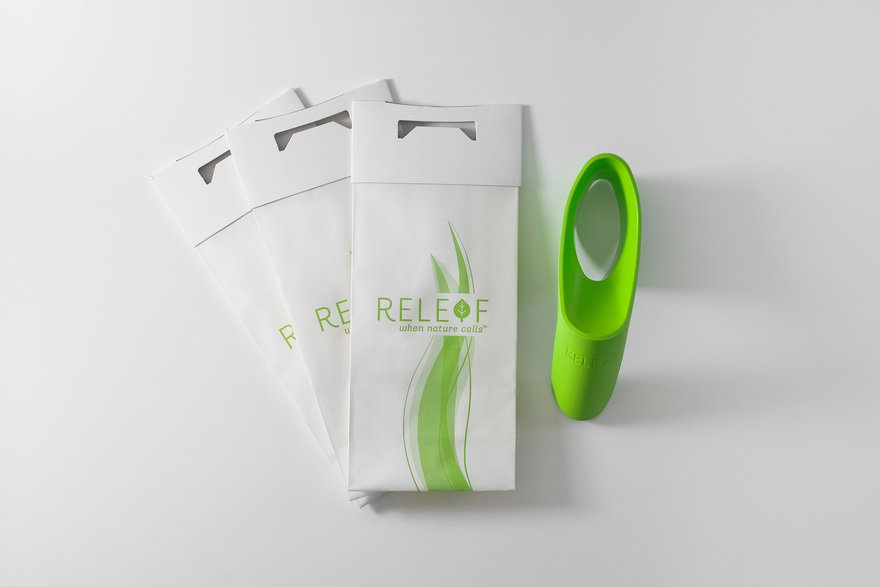 Urinary Incontinence (UI) can affect anyone, yet the products available to help people manage this common condition are generally one-size-fits-all and pay little attention to ergonomics, usability and inclusivity. The challenge with Releaf Freedom was to design a product that helps all people manage their UI - with specific attention being given to those who are less physically able.

Good design must focus on the end user – not just the subjective preferences of the designer. From the form, function and experience to the materials and sustainability, Releaf Freedom offers a significant improvement on the competition in all of these areas, and more.

Urinary Incontinence (UI) is a massive global problem that is largely overlooked by design:

- If UI were a country, it would be the third most populous country in the world

- Patients with UI are 26% more likely to fall and 34% more likely to suffer fractures, which occur mainly due to changes in routine and risky behaviours like arising in the night to urinate

It is therefore essential that new products are launched to serve this market, and that these products are designed with the user, contextual and emotional factors at top of mind.

The project came about due to the personal experience of Binding Science's founder, Keith Binding. He saw first hand how much a condition as common as Urinary Incontinence can degrade people's independence, dignity and quality of life.

He came to realise that existing solutions were poorly considered from a design standpoint and rarely considered usability, inclusivity or contextual issues – despite the vast emotional impact of the condition on the millions of people who suffer with UI every day.

However the route to a solution was by no means straightforward. Usability and functional priorities often worked directly against the relentless need to reduce cost that comes with operating in this sector. Furthermore it was critically important to the entire team that the product have a significantly smaller environmental impact than it's direct competitors – another consideration that is rarely found in similar products.

From the outset, expert panels were critical in helping to fully understand the clinical need and to keep the team focussed on the real-world needs of the patient. The aim was that the product should be suited to use in clinical settings, and it was therefore essential to collaborate with Buckinghamshire Healthcare NHS Trust in the UK, alongside various specialist experts including an experienced Neurological Physiotherapist. Tone Product Design's Industrial Design expertise in both the medical and consumer sectors helped balance clinical function with user need and TPG International's experience in packaging design was invaluable in perfecting the consumable elements.

Countless design iterations were tested internally and with end users in order to find the elusive balance between ergonomics, ease of use, proportions, form and manufacturing simplicity. Rapid prototyping was used extensively, alongside vacuum casting and prototype tooling towards the latter stages of the project.

Binding Sciences also invested into the research and development of Bio-Super Absorbant Polymers (bio-SAPs). SAPs are useful in their application of converting liquid into an odourless 'jelly' that prevents spills – but they are not currently sustainable. Releaf Freedom was designed to accommodate Binding Sciences' Bio-SAP as it becomes commercially viable over the coming years. In order to validate the design, a sustainability report was conducted by researchers at Oxford Academic Health Science Network, which showed the potential for a significantly smaller environmental impact than competitor products.

Once the team had settled on the design direction, a formative user study was conducted, followed by a clinical trial to prove the product's efficacy. The results were extremely encouraging, with the product increasing the confidence of over 80% of all the patients involved. Quotes from those patients are even more powerful than the statistics and show a truly life-changing impact. These can be read in the accompanying pdf.

The final design aims to maximise the function of every part in order to be as efficient and functional as possible, whilst tying it all together into a considered form factor which distances itself from typically ugly, utilitarian looking medical products.

The two part (disposable bag + reusable handle) architecture is critically important to the design, as is the inventive way in which the two attach and separate. Many other products are entirely disposable – meaning that a vast amount of plastic is wasted after just one use. The Releaf Freedom handle consists of just two parts but can be reused hundreds of times, vastly reducing the waste generated. Simply squeezing the collar of the bag to open it will allow the two parts to be securely clipped together. The bag can be clipped on in either orientation, which is a significant benefit for the visually impaired.

The bags have been designed stand upright, which is critically important for those who might need to use the product multiple times per night. Furthermore all the liquid is absorbed within seconds by a super absorbent polymer - eliminated the risk of spillage and odours.

The precise form of the rim has been carefully refined to create a leak-proof seal for female users even while seated - and is also suitable for use by men. The handle form has also been specifically designed to accommodate people with reduced dexterity. A subtle spark texture makes the handle comfortable to hold, with no sharp or live edges that could tear dry skin.

A high gloss interior surface finish makes Releaf extremely easy to wipe clean hygienically, and a clever internal clipping geometry allows the handle insert to 'float' inside the handle - maximising drainage and ventilation for cleaning and eliminating any areas where liquid could be retained.

It was extremely important that the industrial design strike a careful balance between aesthetics, ease-of-use, inclusivity and commercial viability. We believe that the result achieves this and is a significant improvement when compared with other portable urinals or absorbents.

A barriers to adoption study undertaken by Oxford Academic Health Science Network found that adoption of the Releaf Seated device could help reduce the incidence among UI sufferers of falls and fractures, dehydration-induced UTIs, incontinence-associated dermatitis, and urinary tract infections due to absorbent pad use. Oxford AHSN's preliminary hypothetical economic analysis indicates that a 10% reduction in the incidence of these conditions among over-65s could save the UK healthcare system alone £320m per year.

As Releaf Freedom is a medical device, the design process needed to be rigorously managed in accordance with ISO standards, and the materials validated to ensure that it was suitable for the intended use. The design team worked with regulatory consultants throughout to ensure these requirements were met.

The team worked closely with a local, UK based manufacturer throughout the design for manufacture stages and first production runs to ensure not only the highest quality but also to reduce the carbon footprint of international shipping.

The focus that Releaf Freedom places on inclusive design results in patients having:

1. Enhanced independence and thus, reduced reliance on outside support in managing their urinary continence issues

3. The potential to engage in a wider range of social and other activities

5. Enhanced compliance by patients on diuretics

6. Reduced incidence of falls suffered by the infirm going to and from the bathroom

The anecdotal evidence from clinical trial users has been overwhelmingly positive, with many reporting that they have been able to lead more fulfilling lives as a direct result of this product.