Syng has reinvented the high-fidelity speaker and developed an all-encompassing audio product that honors sound for the ever widening spectrum of content we consume. Sound is a fundamental component of daily existence–sound matters, moves cultures, and cements attachment in love and life. Syng exists to make sense of sound at home. There are many formats of audio content that are out of step with the fragmented range of speaker types we have to choose from. For music in the home, the industry has only recently begun to move beyond simple two channel stereo playback, nearly a century after its invention. Now we are adopting new media at a furious pace as the technology industry races to merge real and virtual experiences. The old paradigm has run its course, and there is a need for a new beginning for home audio.

Much is said about spatial audio, the reproduction of sound in space. To Syng, the sound of reality is spatial audio: sounds from many sources around you that form the three dimensional aural experience that you are at the center of right now. Syng has created a real sound experience in which stereo has never felt more live, movie soundtracks never more real and you have never before had the ability to glide this soundstage through your space with the light touch of a fingertip. Cell Alpha is an instrument built to effortlessly provide this experience. The world's first Triphonic speaker shrinks as you begin to listen and dissolves into the sound it articulates in three dimensional space, sound inseparable from the design. 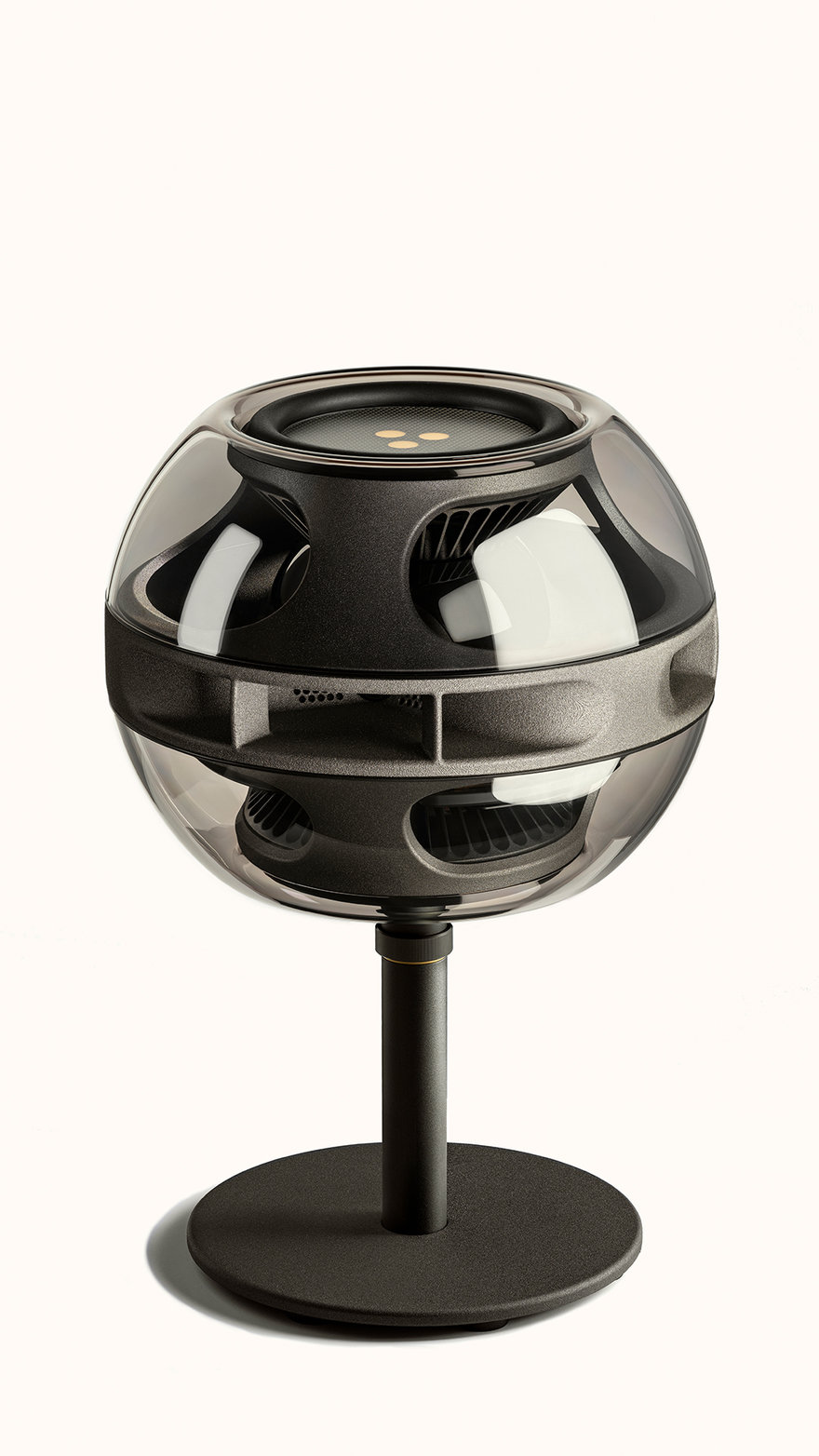 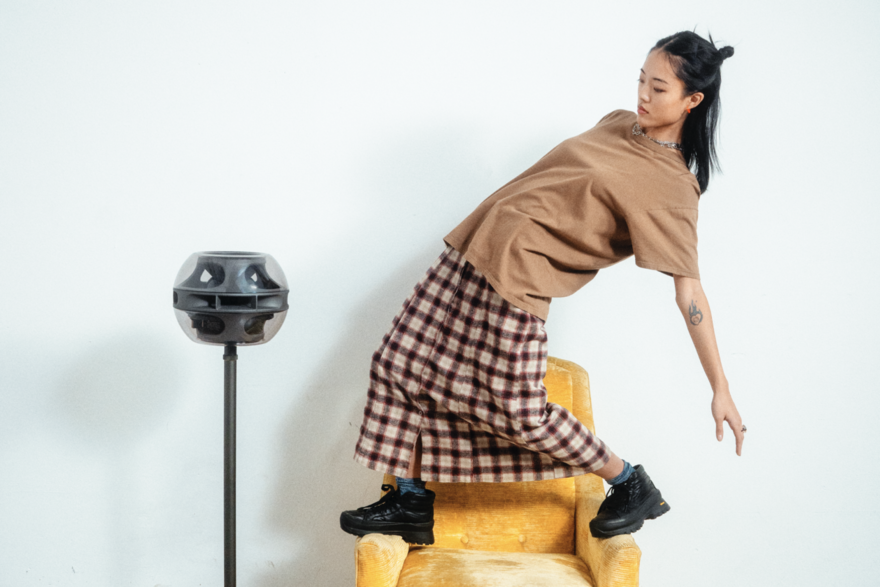 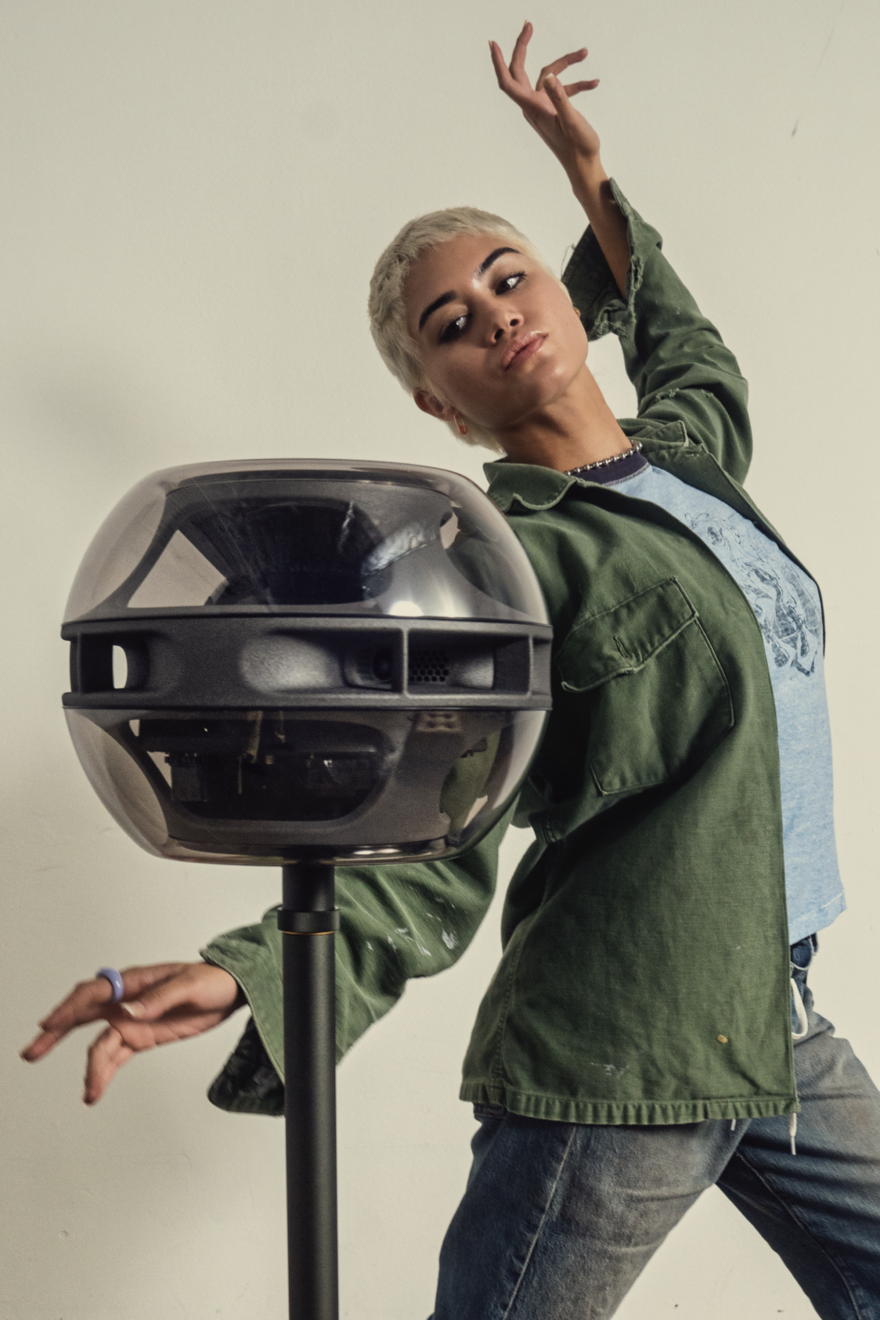 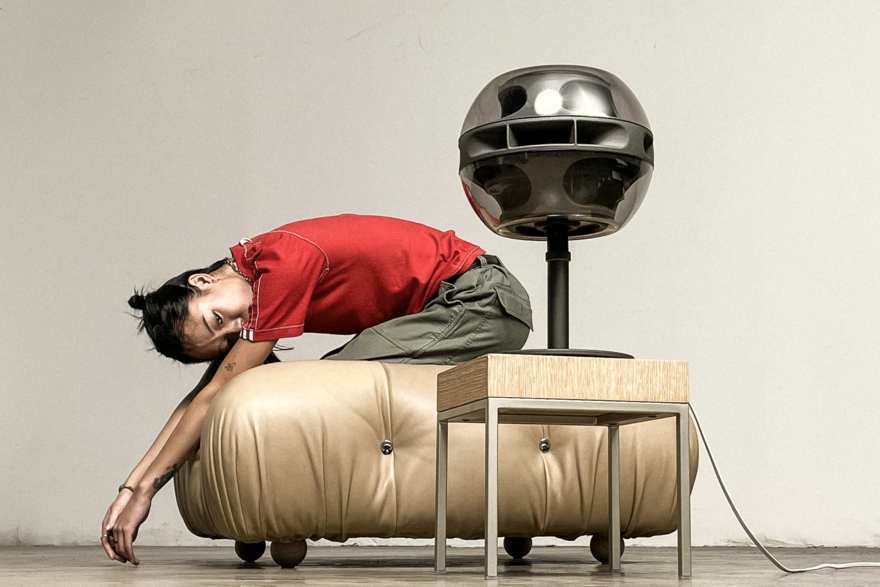 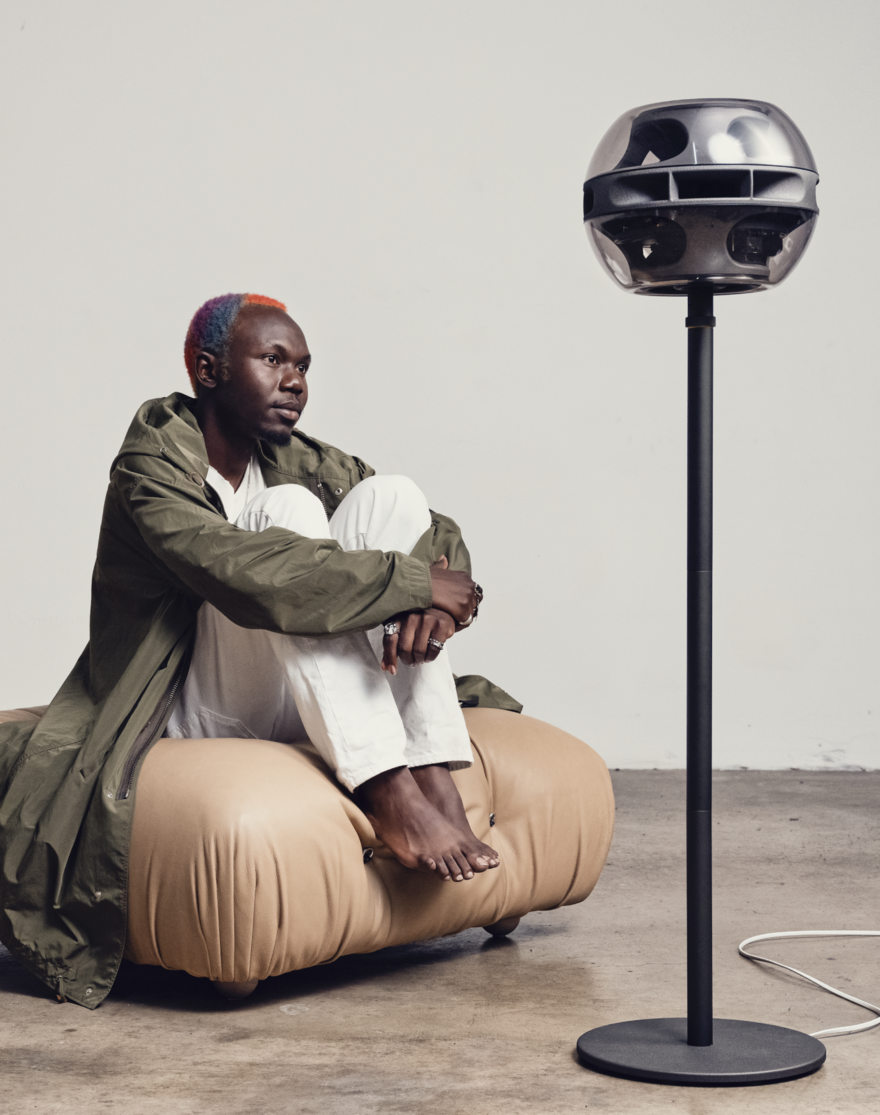 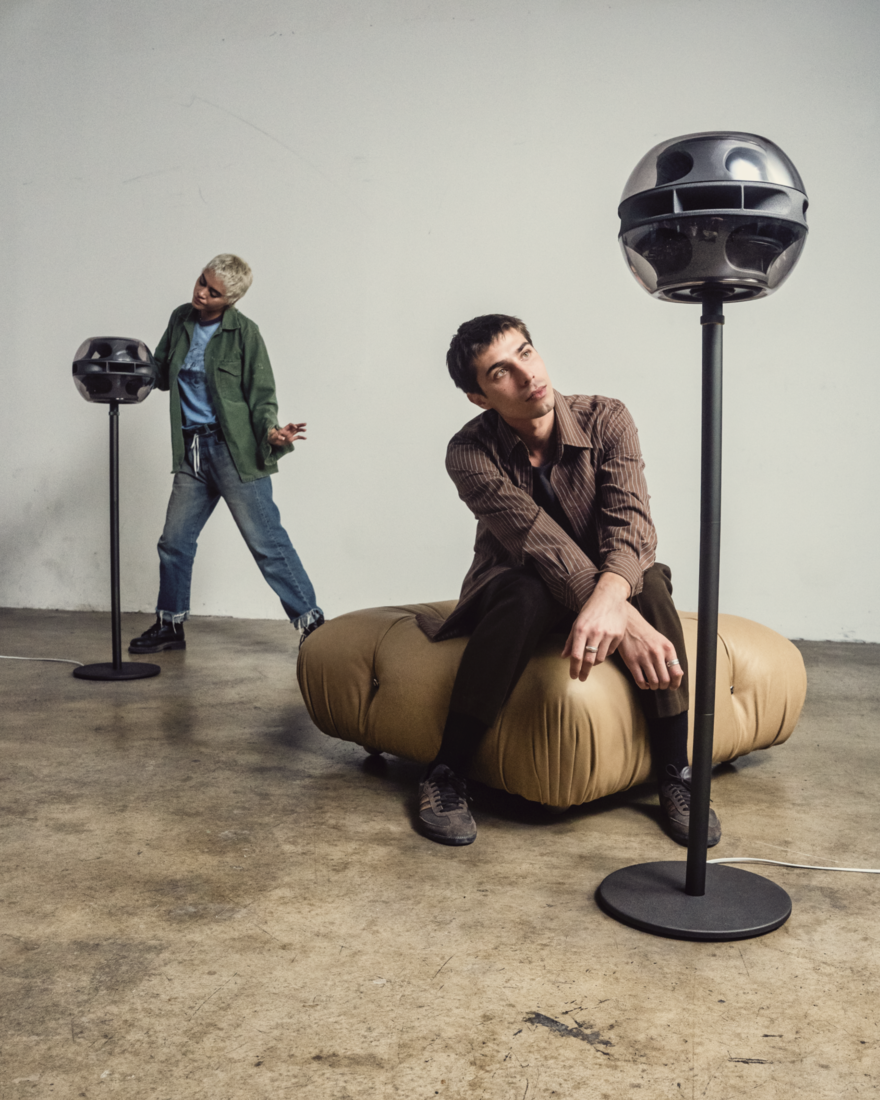 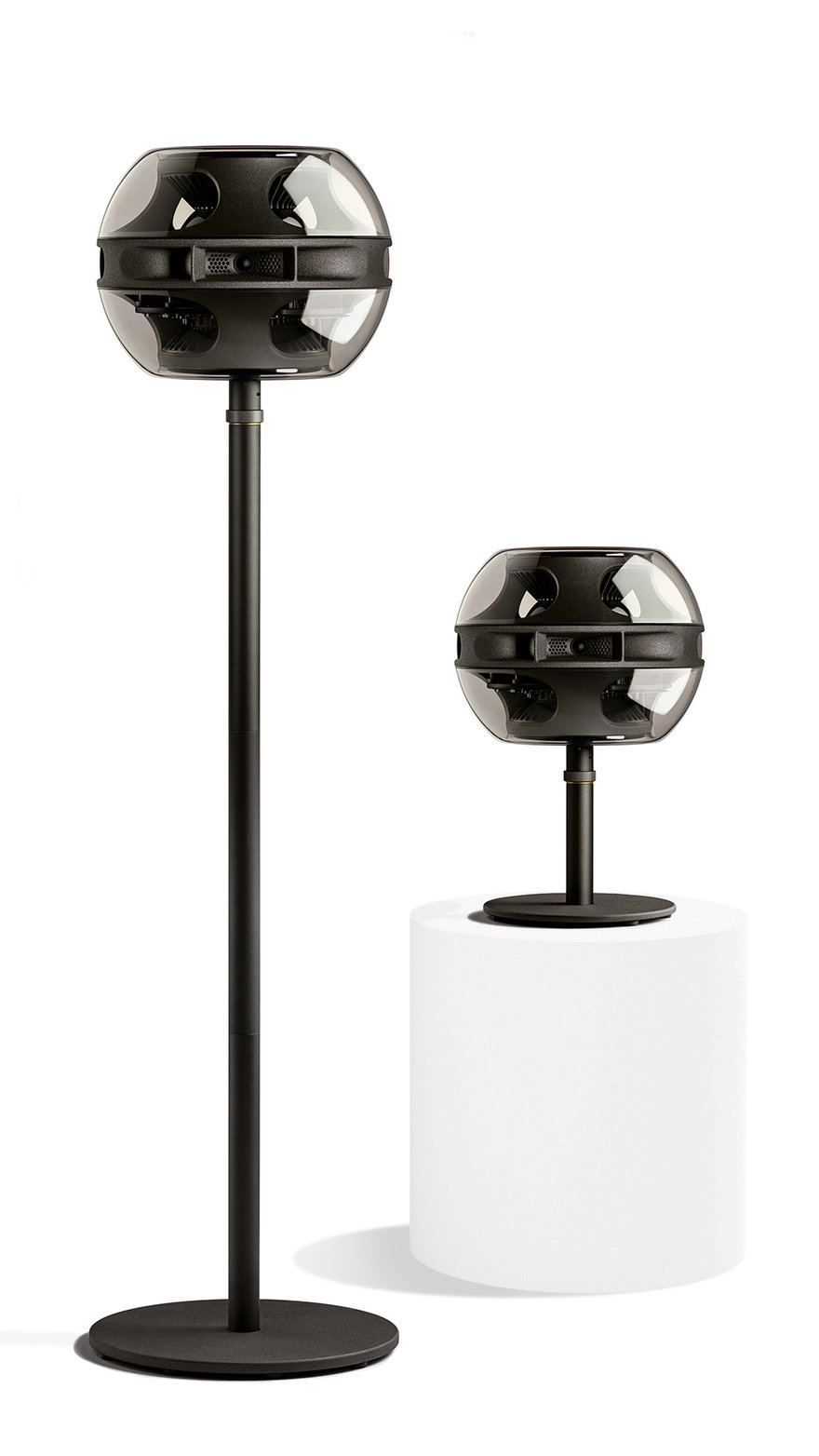 Cell Alpha is the first of a new kind of speaker, the next generation of audio technology that reads the characteristics of any room and intelligently presents the audio to that entire space as an immersive sound-stage. Triphonic technology is a set of hardware and software standards, and Cell Alpha embodies this technology most explicitly in defining the acoustic architecture of the Triphone. The Triphone can be most simply described as a sound projector consisting of a three horn array emanating from the core of Cell Alpha. The Triphone is essential for room calibration and for playback.

Syng's Cell Alpha is artfully observant of its function. It looks as remarkable as it sounds, with every element wholly designed in service of acoustic principle. Eight speakers are co-located at the center of the device to produce the purest full range single point of sound. The Triphone is a self-contained 360 degrees sound protector sandwiched in the equator between force balanced woofers, with these opposed woofers preventing unwanted mechanical vibrations from traveling through the stands to ceilings below.

The unique visual qualities of Multijet Fusion 3D printed Triphone and its monocoque structure allows for an otherworldly appearance of Cell Alpha in the absence of common manufacturing references. No external fasteners are visible, you can trace the acoustic path of every speaker through the smokey transport enclosures. To add to the mystery, the support post pierces the bottom woofer suspending the Cell in space and the iconic silhouette of Cell Alpha floats in the room as if invited. Cell Alpha is like nothing you have seen before.

During self-calibration Cell Alpha acoustically scans the room, pairing the Triphone with an array of three microphones to tune the EQ to the room and to detect the presence of nearby walls. If there are additional Cells in the group they will precisely identify their relative locations in the same automated setup process. Once calibration is complete, Cells are tailored to the room and a map of the Cells in the listening environment is generated in the Syng Space app.

Playback capitalizes on the Triphone's ability to simultaneously project multiple streams of audio. It can virtualize any speaker array with precise placement of left, right, and center content of stereo, and multi-channel movie surround formats such as 5.1. Cell Alpha automatically composes content to reproduce its spatial nature and to best present it accounting for the shape and nature of your listening environment.

Adaptability and childlike simplicity are hallmarks of the Syng experience. Unifying home audio was a clearly stated user-focused goal, to have one solution that you could trust to play any type of content and to hear it with the integrity and craft of the master recording in the production studio. The next enormous challenge was to deliver this experience to a world of unique home environments.

The flexibility of speaker placement is key to our solution enabled by Triphonic technology–there is no need to adhere to any strict number of speakers or specific layouts. Cells should be placed somewhat evenly and should extend to define the desired listening space, this could be for an individual room as easily as it could be an open plan multi-use space. To make this feel natural, Cell Alpha is designed to be accommodated in familiar, nonintrusive ways with floor and table stands, much like lighting. Find a way that you are happy with how Cells fit within your environment and leave it to them to read the room and set the stage.

Syng Space, the companion app to Cell Alpha, is a revolutionary map-based interface that allows listeners additional control to play with sound in creative and powerful new ways. It will always default to optimizing sound for the entire space the Cells occupy, however, with Syng Space it is possible to localize sound to a part of the room, or to rotate and focus the sound-stage to be centered on you. This is the first sound system that is truly designed for the home and the way we live.