Carnegie Hall is synonymous with music. The Hall's legacy of excellence in programming and world-renowned acoustics make it the most admired performance venue in the world, giving great significance to an artist's "Carnegie Hall debut."

Champions worked closely with the in-house Marketing and Creative Services teams to update the brand in order to help bring the transformative power of music to as many people in as many places as possible. The goal was to make everyone feel welcomed in the Hall without compromising on its standard of excellence.

The challenge and opportunity of branding a destination is that there's no faking the intersection of 57th Street and 7th Avenue in New York City. The design must deliver the experience authentically, every time. Carnegie Hall's long history brings with it a culture of storytelling and a museum-worthy visual archive. The new identity celebrates the past and readies for the future by assembling a graphic toolkit now prepared to stand the test of time. 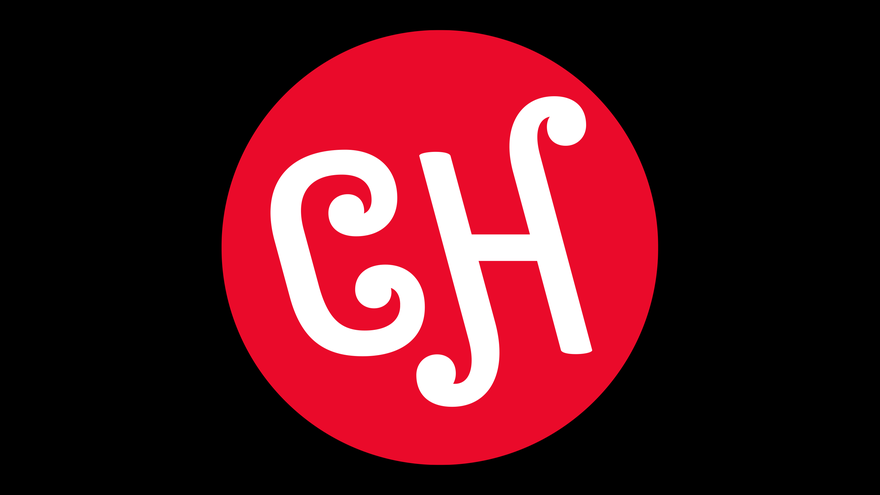 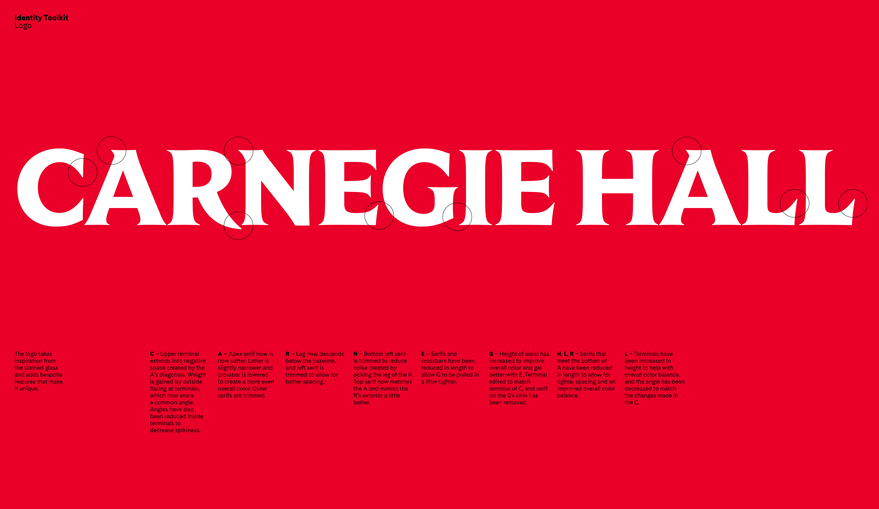 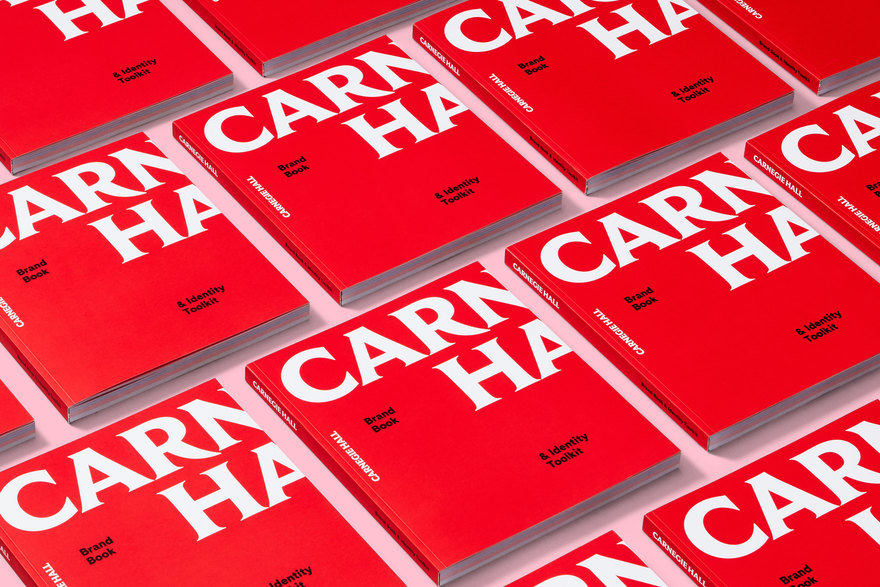 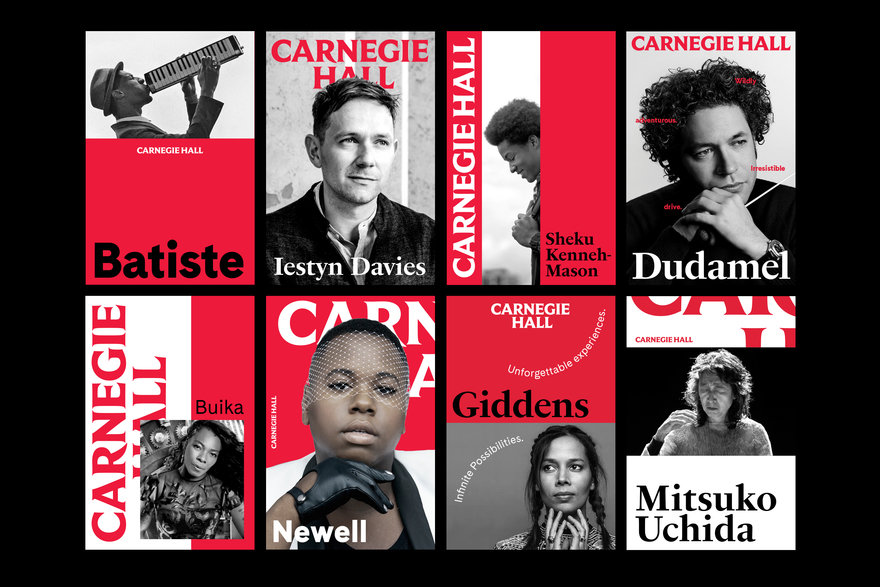 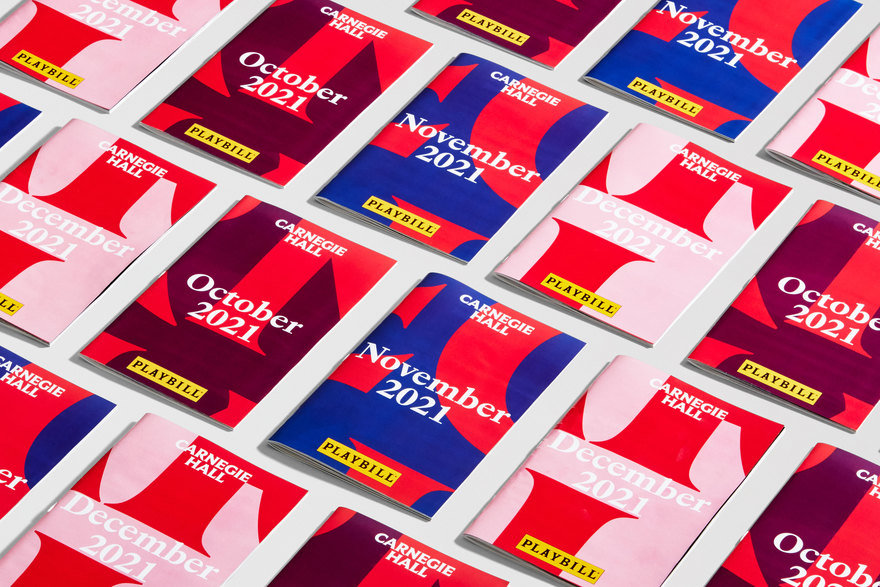 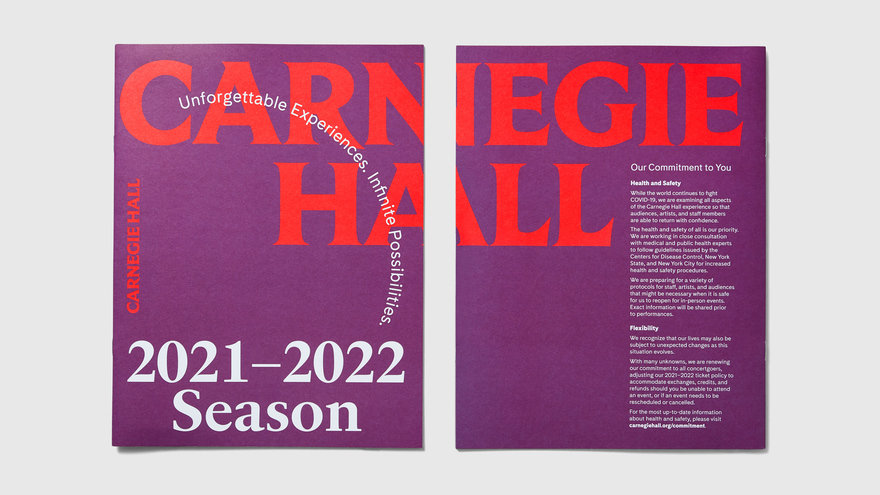 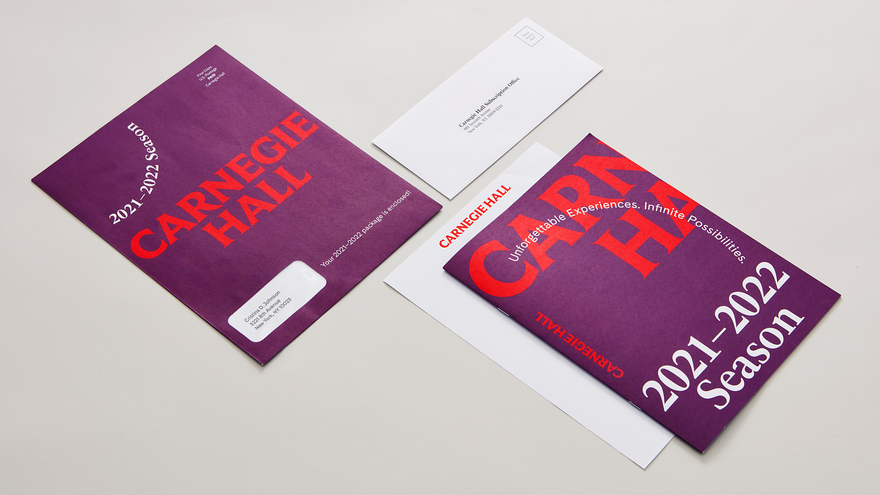 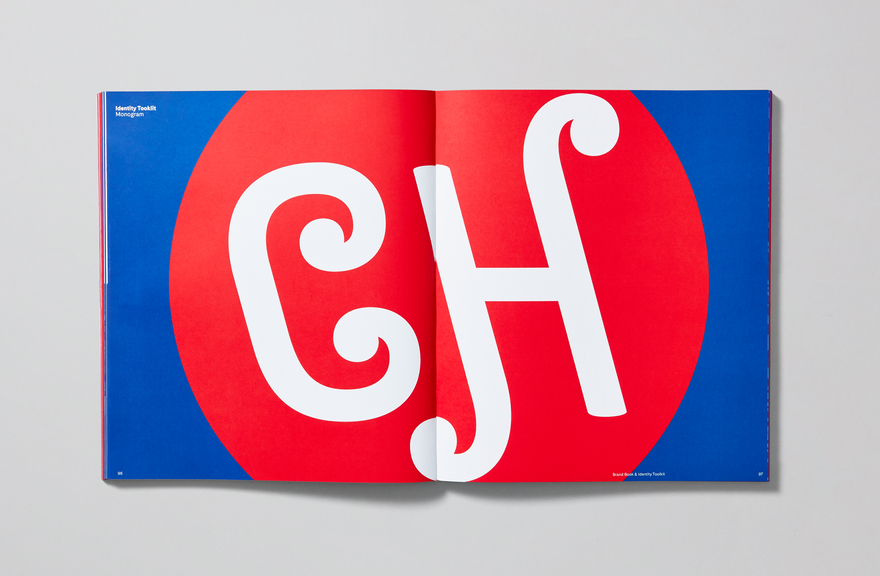 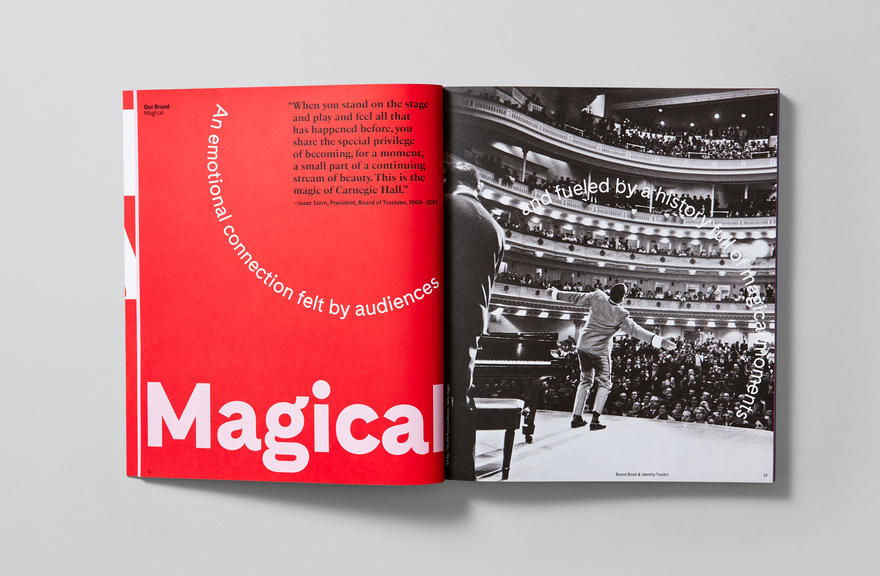 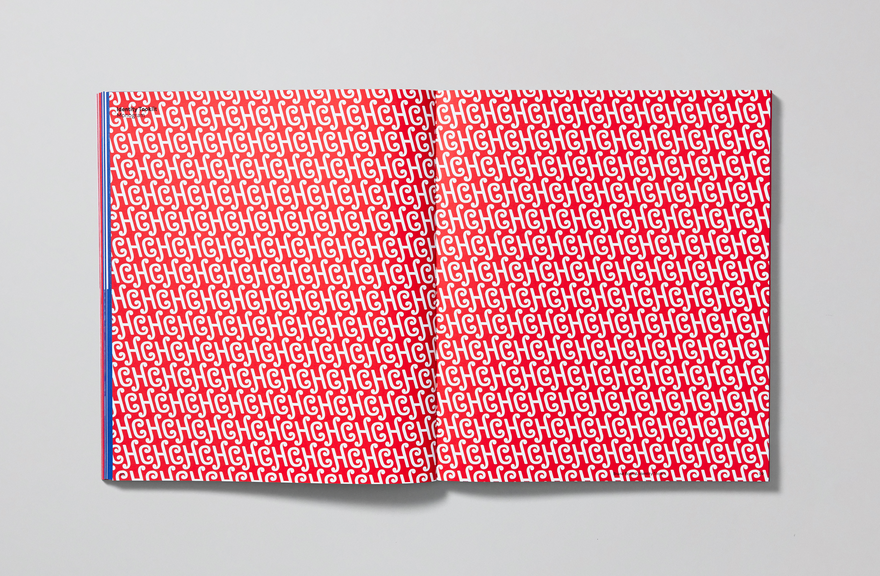 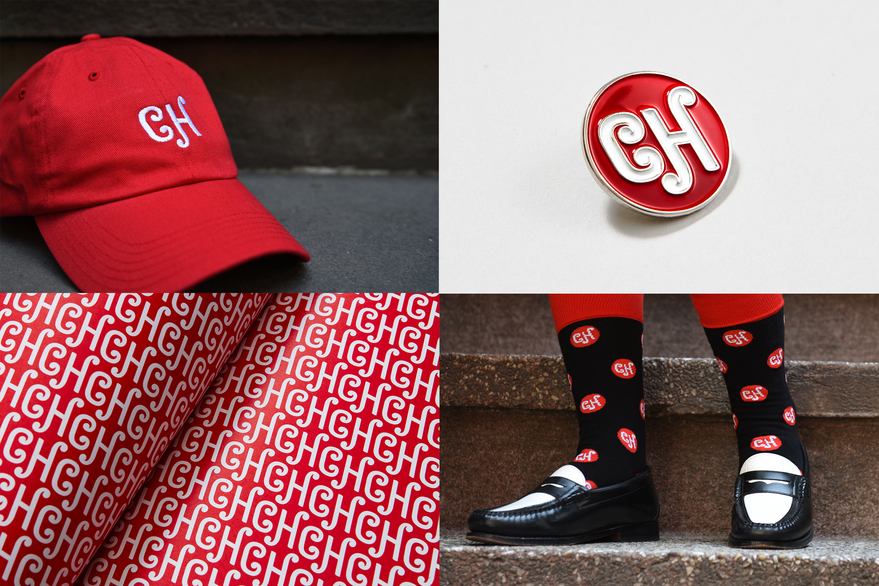 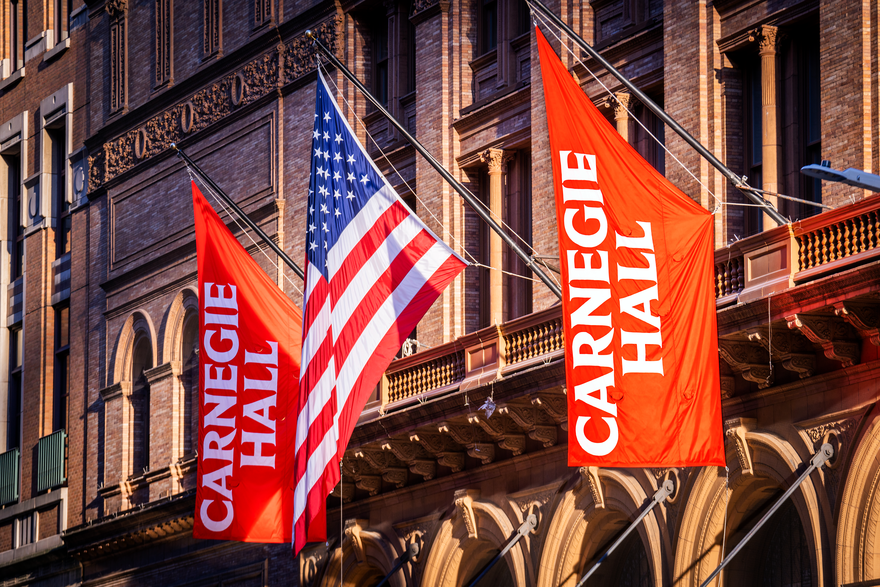 The Marketing and Creative Services team at Carnegie Hall is tasked with designing and producing more than 2000 unique pieces of collateral each year. They needed to make the design process easier and more powerful. They needed a toolkit that was flexible enough to reach several different audiences, from members and patrons to students and educators. And they needed to claim responsibility for all that the Hall does while simultaneously delivering on the magic and endurance of the brand.

Carnegie Hall's most recognizable asset is its name. A wordmark was the only logo solution that made sense. Our starting point was the stained glass lettering on the large poster cases around the building's perimeter, which were added to the facade in 1919. Champions worked with Frere-Jones Type to create a wordmark that incorporates the distinctive features of the poster case lettering and is also optimized for present-day needs.

In 1890, the finest steel from Andrew Carnegie's own mills was used in the Hall's construction. Almost 125 years later, renovations uncovered a steel beam that was embossed with the Carnegie name. Champions worked with Jesse Ragan to lift the calligraphy from that stamp in the steel. The new monogram brings forward Andrew Carnegie's visionary spirit, the enduring magic of the Hall, and the power of music to connect us to one another.

The combination of a classic serif typeface with a simple and modern sans in a variety of weights supports the diversity of programming put forth by the Hall. Together they can talk about classical music, jazz, hip hop, music education, and social impact programs, and all that the Hall presents.

Type and layout also deliver a little musicality. A simple grid, flat color, high-contrast text, and hyper-focus on performer imagery are the ingredients. A flexible wordmark allows for dramatic contrast in scale. Cropping turns up or tunes down energy, excitement, and expression. And that magical type brings the emotion, with animation always moving left to right – a relentless forward momentum appropriate to the Hall's visionary spirit.

Taken together, the elements that make up the identity system will keep the brand fresh for years to come. The Carnegie Hall Brand Book provides the tools and guidelines required to implement the brand efficiently and effectively. It sets a standard for putting the system into practice while telling the story of what makes Carnegie Hall so special.