For the Fall Graduate Studio course, we were asked to rebrand an existing organization. My tasked organization, Girls Who Code, provides online and in-person training in coding and technology for nonbinary and female-identifying individuals ages 8–22. Girls Who Code was pushing the boundaries in every area except for their branding, which was redone in 2020. It was safe and expected, living strictly within the bounds from which they were attempting to break free. They asked their participants to be brave–to challenge themselves, to build new skills–and their branding needed to reflect that.

Girls Who Code is on a mission to change the world, and this new brand system helps them to do so. Each part of the system–from the color to the typography to the imagery–is meant to inspire and excite the organization's participants and partners. Its vibrance shines a bright light on the industry, setting an example for what is possible through code. 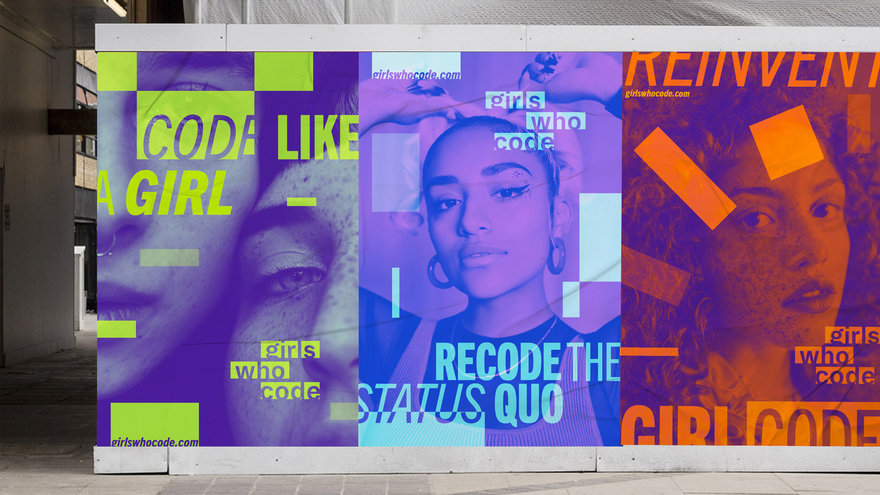 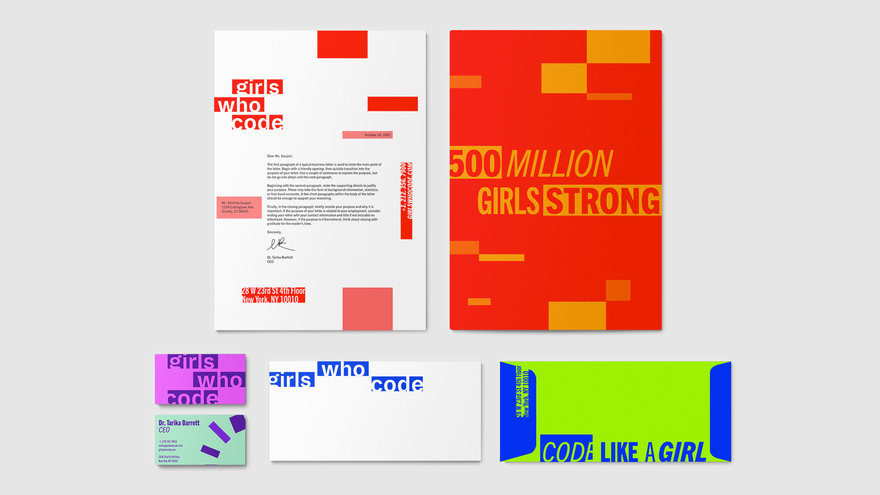 Stationery Letterhead, business cards, and envelopes for Girls Who Code 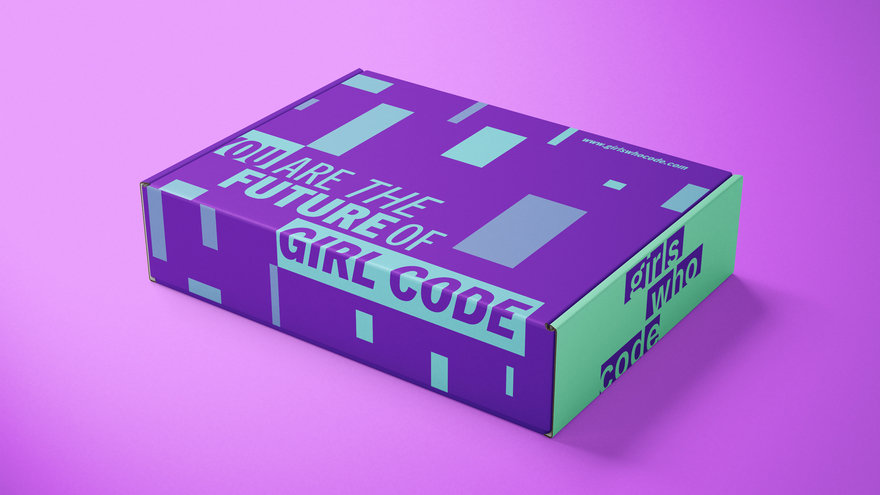 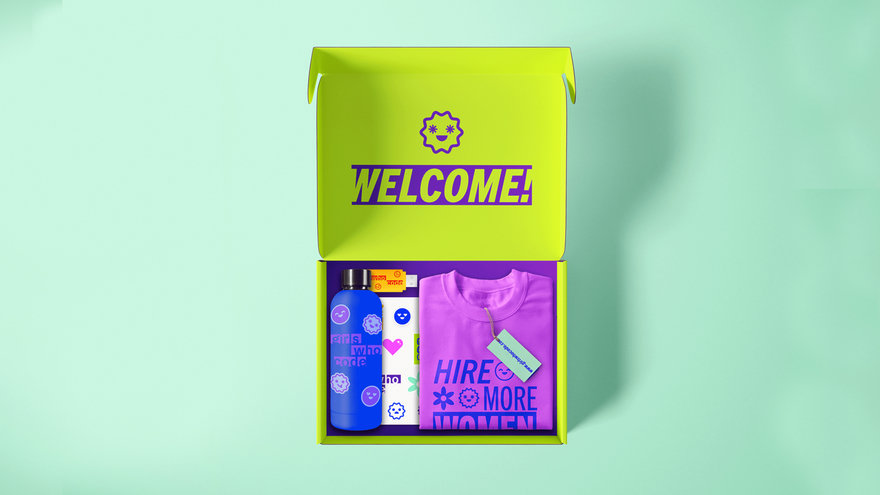 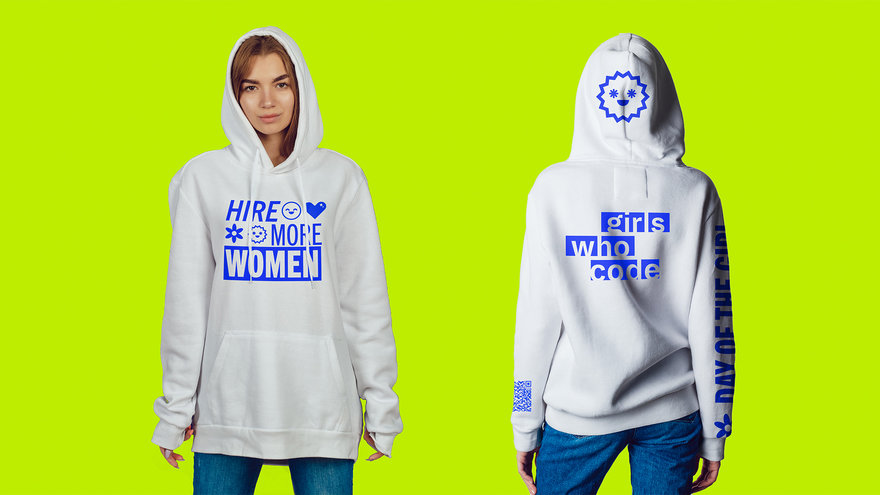 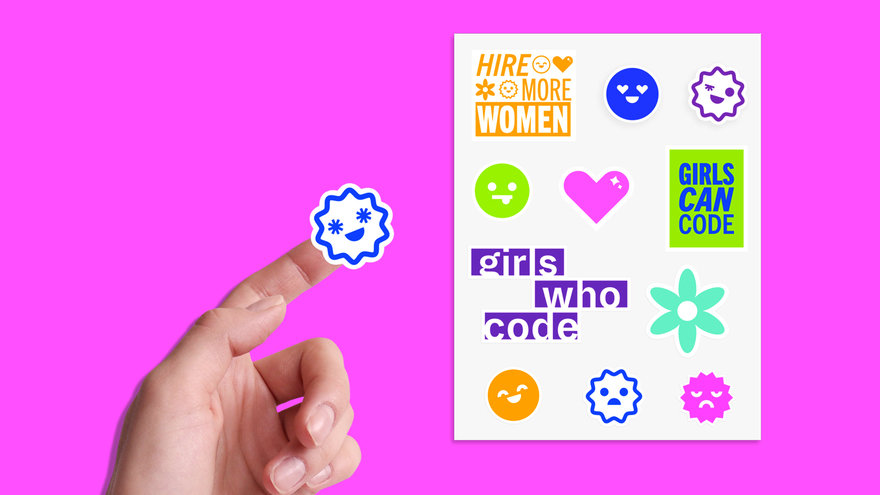 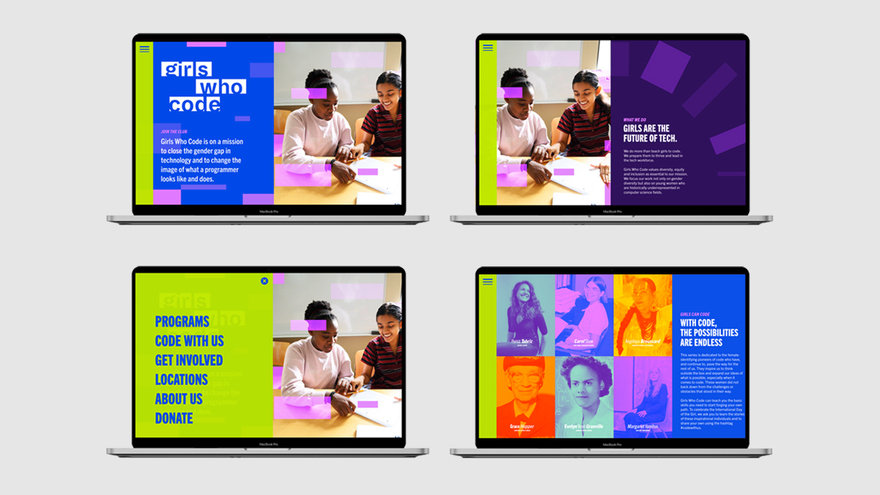 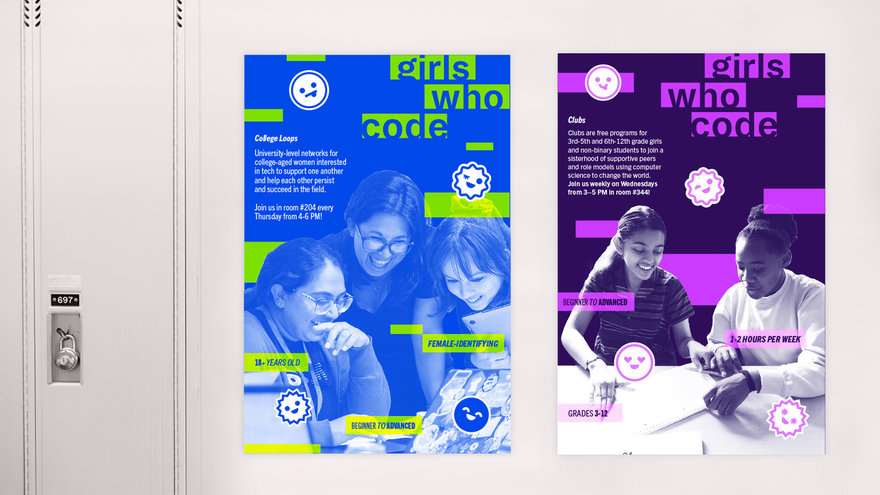 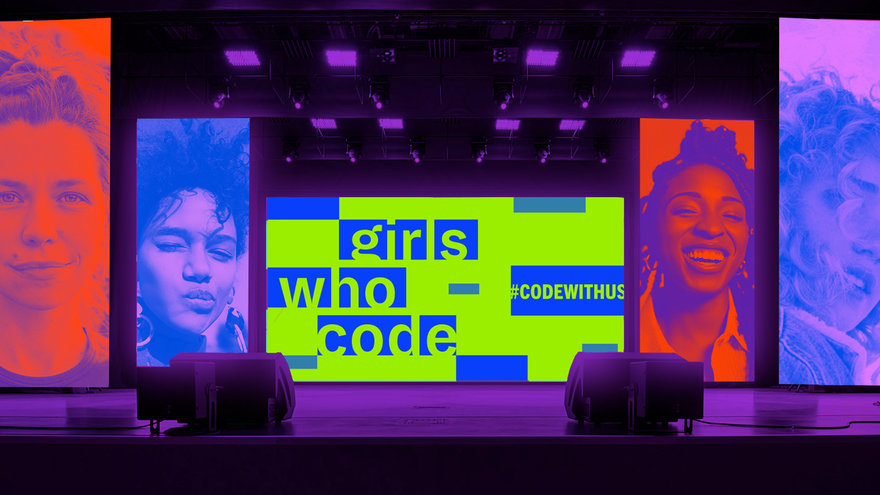 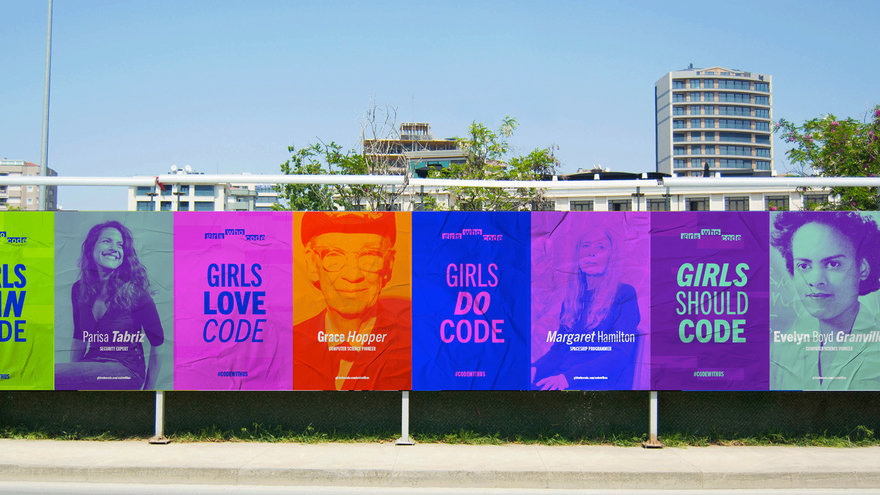 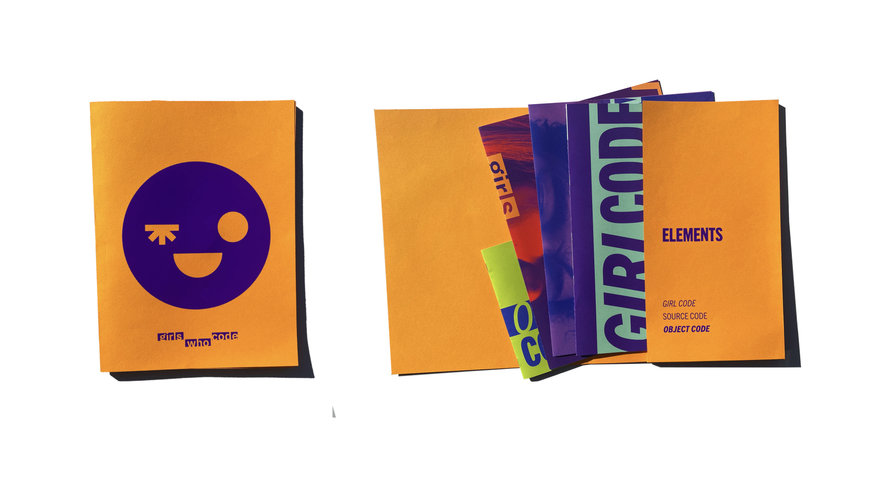 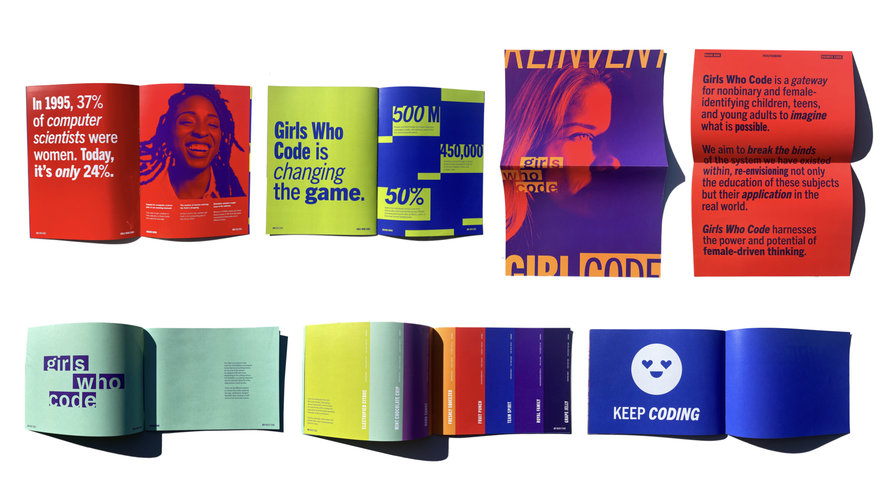 STRATEGY Communicate Possibility: The world of The world of tech is filled with opportunity. Girls Who Code will break free of the existing, lifeless model by showing our girls–and their communities–what is possible with code.

Embrace Bravery: Our differences make us stronger. We will stop trying to fit into a system that was not designed for us. We are brave–not perfect–and our brand should be too.

Take Charge of Change: The industry is ripe for disruption, and Girls Who Code is already leading the charge to a better future. The branding must reflect the revolutionary spirit that lives at the center of the organization.

POSITIONING Girls Who Code exists to show female-identifying children, teens, and young adults what is possible. They aim to break the binds of the system they have existed within, re-envisioning not only the education of these participants but their application in the real world.

Girls Who Code harnesses the power and potential of female-driven thinking. They go beyond traditional programming offerings to challenge, connect, and transform participants, equipping them with the tools needed to navigate a changing world.

LOGO The logo is the organization's base code, made up of simplified, rectangular forms that act as the building blocks for the rest of the system. Its ability to shift and move depending on the setting mirrors the flexibility of a coding sequence and the dynamic diversity of the organization's participants. There are six different options to choose from when applying the logo, allowing for designer flexibility when working around both vertical and horizontal constraints.

COLOR PALETTE Color is the life blood of the Girls Who Code rebrand. Developing a vibrant, bold palette communicates the monumental shift in mindset that the organization promotes while appealing to the younger audience members. It is youthful, saturated, and emotive without falling into stereotypically feminine colors.

TYPOGRAPHY In 1948, Jackson Burke was commissioned by Linotype to design Trade Gothic. Burke continued designing new weights and styles until 1960. True to its name, Trade Gothic is free of serif decorations and instead shows personality through a lack of uniformity. The result is a delightfully eclectic collection that articulates clearly with a sprinkling of spunk.

Girls Who Code's message should be heard near and far. A strong typographic hierarchy acts as the system's scaffolding while enforcing the idea of movement and flexibility through the introduction of varying weights and italics.

IMAGERY Highly-stylized, close-cropped portraiture creates a powerful perspective of the participants. The subject faces the camera straight on with confidence and conviction, stoic and unsmiling. The focus locks in on the subject's eyes, emphasizing the importance of the female gaze.

The stylized blocks are added to photography of participants in the Girls Who Code environments, creating a cohesive experience with the rest of the brand. The blocks are a visual depiction of the ways the participants interact with code, using color and opacity to communicate depth and dimension.

GRAPHIC SYSTEM The graphic system is where the concept of building blocks introduced in the logo comes to life. Each block, based on the original form in the logo, is scaled, expanded, and rotated across the grid to convey the possibility and potential of code. It guides the viewer through the brand experience and is showcased across all platforms. Large-scale typography is used to communicate the brand's voice. It is expanded and cropped, breaking out of the frame to encourage viewers to consider the subtext of the Girls Who Code messaging. The organization cannot be confined to the traditional model, and the graphic system comes together to reiterate this idea.