Kin, Kin! The Future of Revelry

In a parody of old ads from the alcohol industry, the Kin, Kin! campaign gives a conscientious update to antiquated ideas of connectedness. Creative directed by RoAndCo, and directed by Alice Rosati the campaign reclaims the visual language of alcohol advertising from the past through a playfully satirical approach. The narrative, inspired by old British Pathé newsreels, speaks to KIN's benefits of consciously connecting, taking back your morning afters and doubles as a humorous piece to educate on the world of Euphorics—a first of its kind.

To drive home the idea that 'the future of revelry is in our hands' the characters from the film were illustrated by Robert Beatty in sublime, close-eyed bliss, toasting the viewer. An ode to the Italian cheers Cin Cin, which means 'to your health', we have created a toast for the modern age—inviting everyone to the party. Kin, Kin! 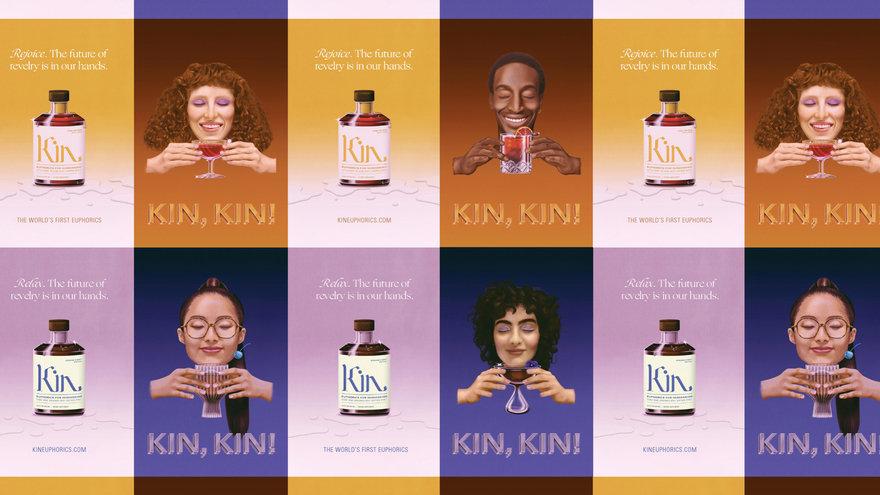 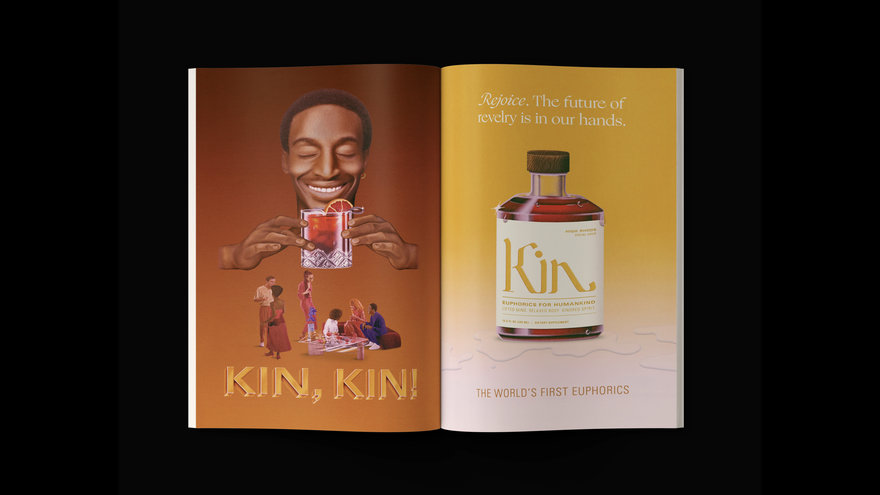 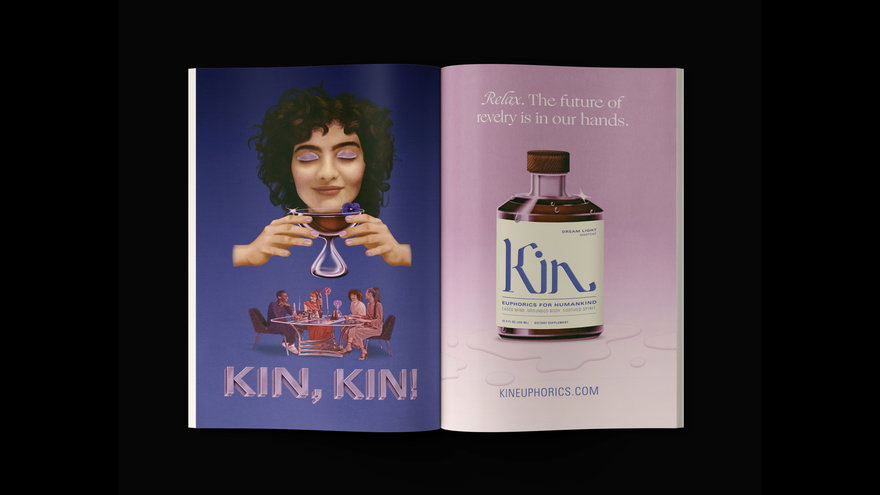 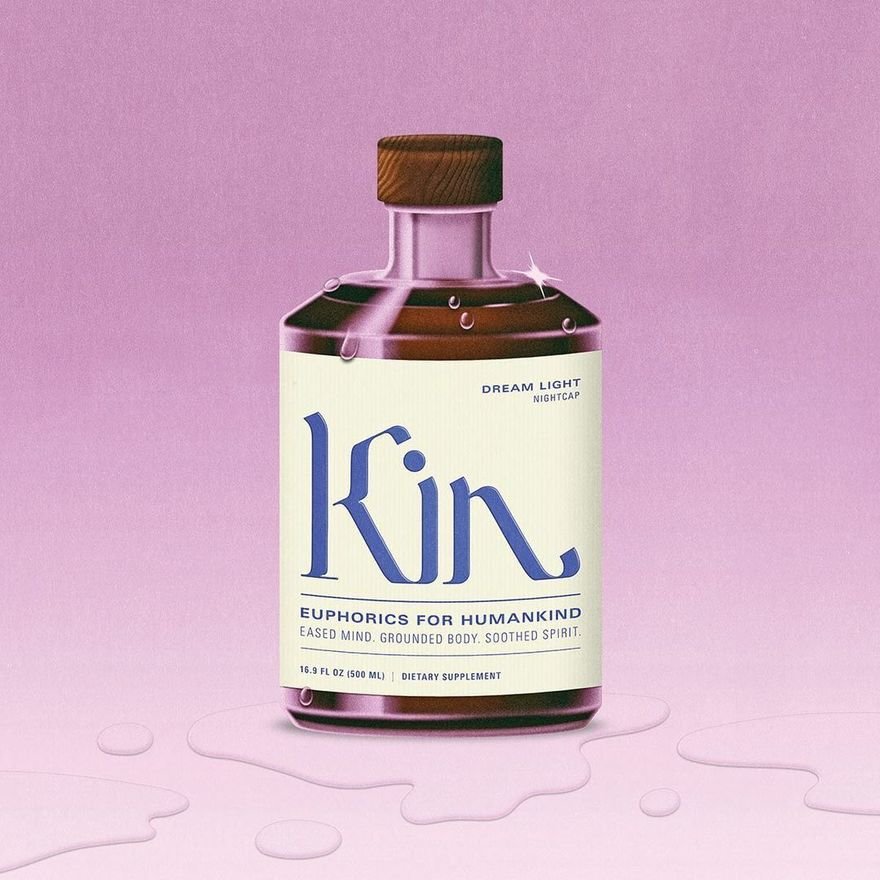 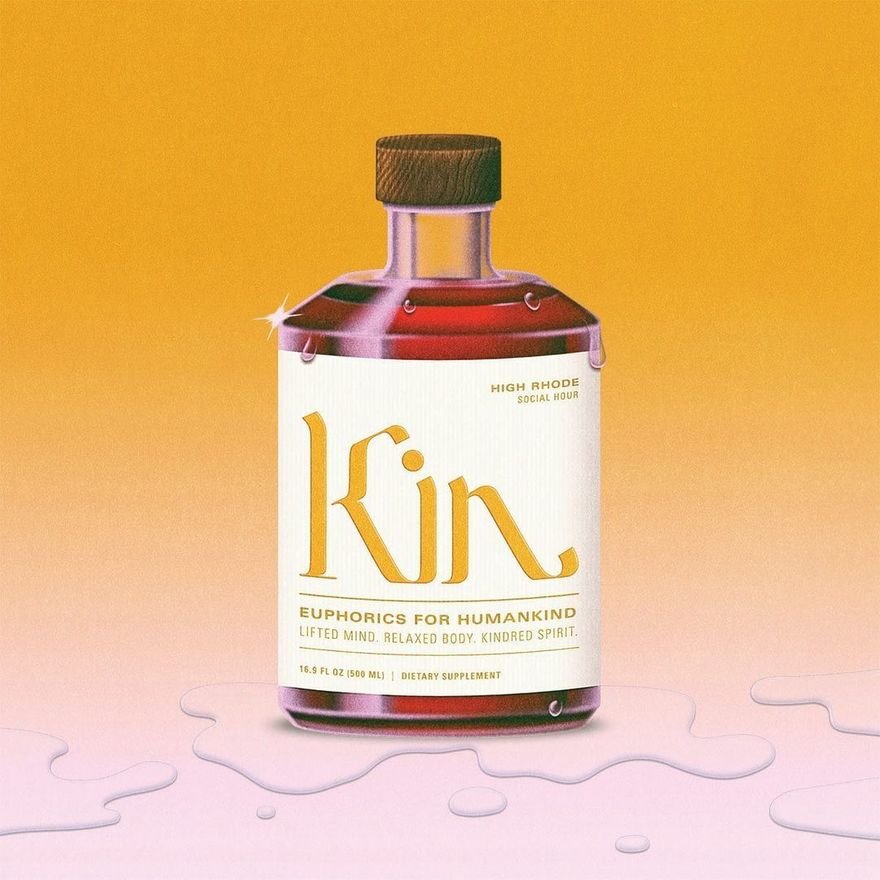 Founded in 2017, Kin Euphorics is a first-of-its-kind beverage made from nourishing nootropics, balancing adaptogens, and replenishing botanicals that opens the mind, calms the body, and connects the spirit. Prior to the launch of their first brand campaign, we worked with Kin to establish their brand strategy and brand identity system. We knew that the wellness industry was evolving socially but the notion of being a 'well-being' in the traditional "after hours" social space (a.k.a drinking) was not yet quite normalized. Springboarding from this insight we knew we needed to create a campaign that focused on both brand awareness and education.

We came up with the idea 'Kin, Kin!' which is a play on Chin, Chin, meaning 'to your health' in Italian. As a new category, there is such a large learning curve with consumers to explain what euphorics are, when to drink them, and describe the sensation of how Kin makes someone feel. We wanted to capitalize on a format that could be beautiful and expressive but overall informative. The Pathé reference in the campaign film really allowed us to poke fun at the industry while educating the consumer. Directed by Alice Rosati, who works with the likes of Miu Miu and Vogue, the film felt more editorial than it did consumer beverage. We wanted the entire campaign to feel as different from other ads as the Kin brand and product does within its competitor set.

To bring the campaign to life in static settings, we took the visual language of alcohol advertising from the past and recreated ads by illustrating them through a modern, satirical lens. We knew that alcohol ads can't directly have people drinking in them—since Kin is non-alcoholic we saw an opportunity to play on this. The Kin branding, which RoAndCo created, has an almost nostalgic feeling to it so it felt natural to take these old ads and give them an update. We partnered with Robert Beatty to create illustrations that cohesively linked the campaign together, To drive home this idea that the 'Future of Revelry is in Our Hands' the characters from the film appear in nostalgic advertising billboards.