The interactive calendar of the year 2020 is made for introducing Taiwanese traditional Holidays to foreigners. The concept of the interactivities is based on the customs or topic of the main holiday each month. We utilize specific characteristics of paper, such as foldable, tearable, and pressable to create various methods of interaction. Besides, the selections of paper are different depending on each holiday theme. Through the fun interactions, people could understand Taiwanese holidays better. 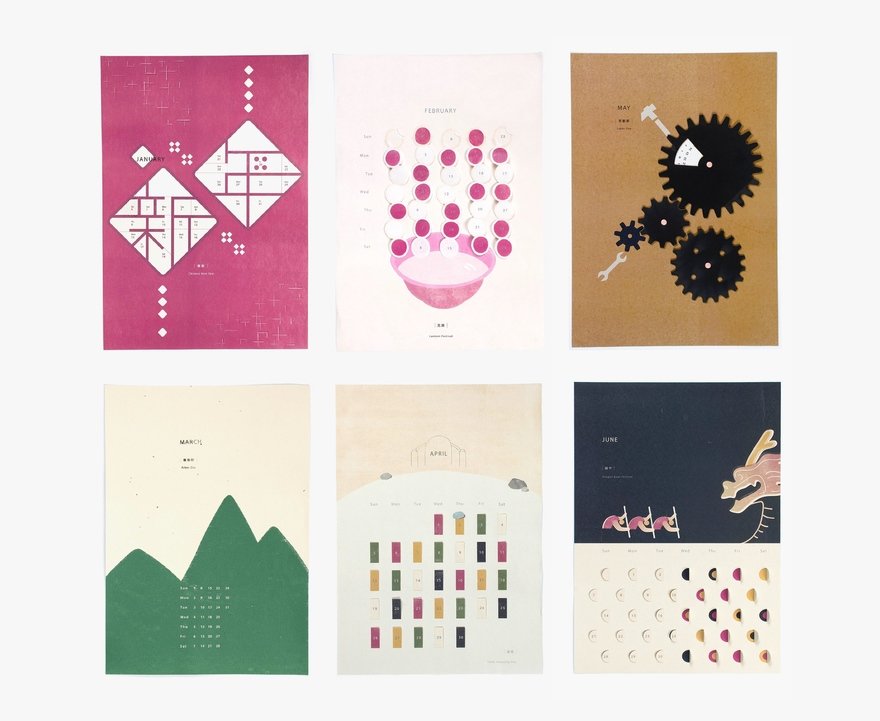 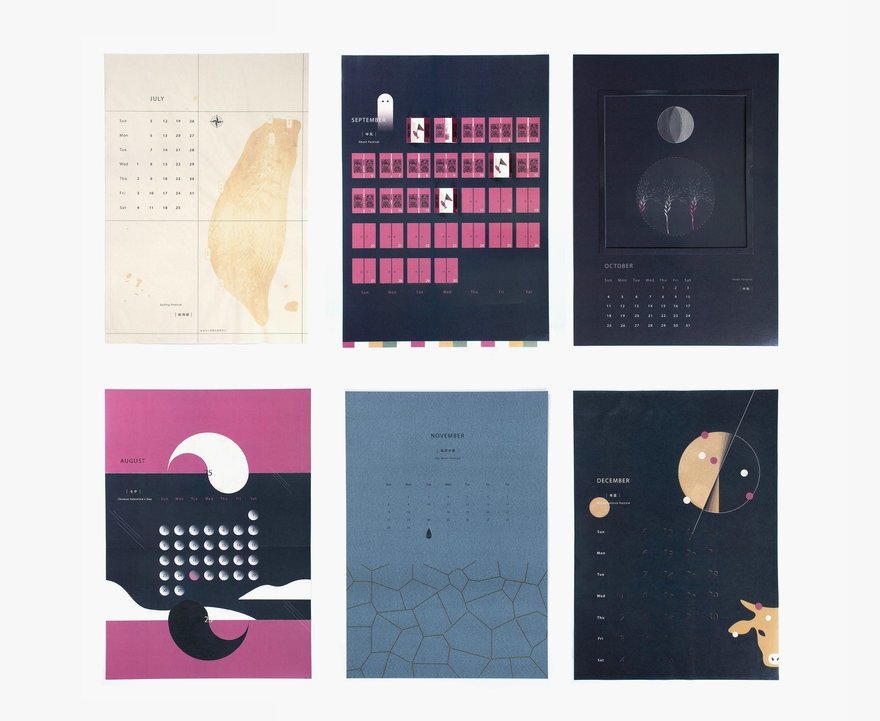 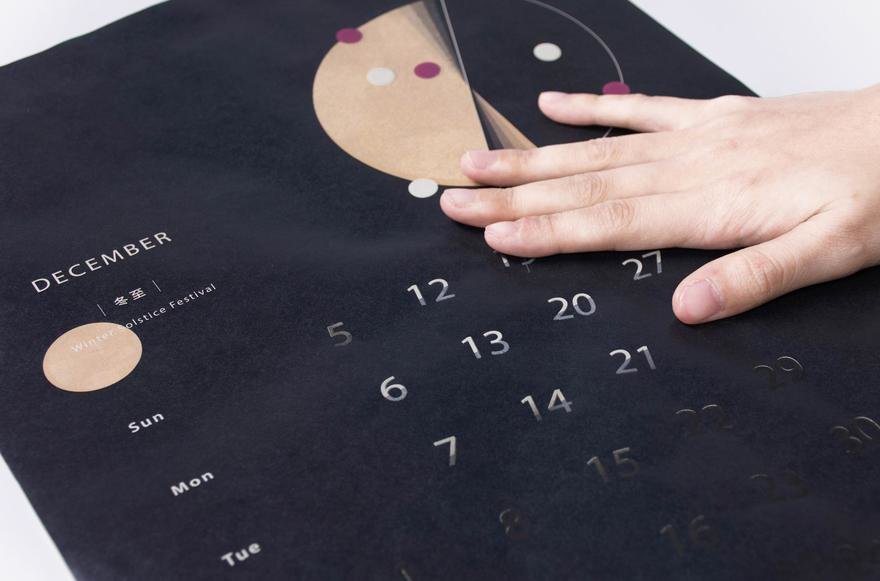 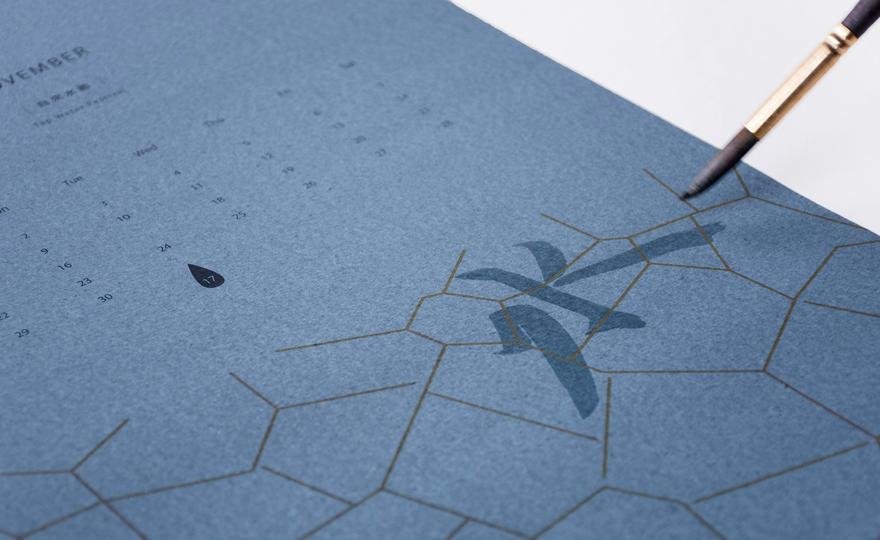 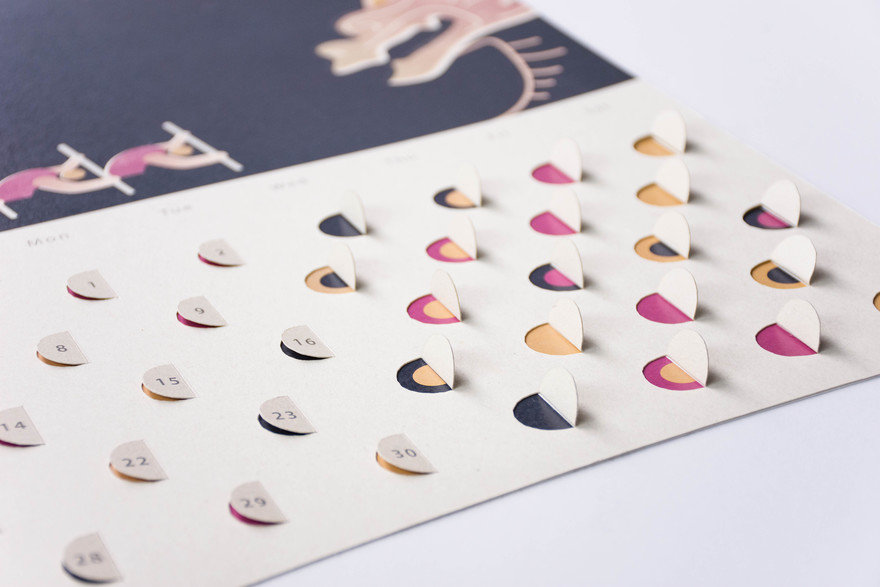 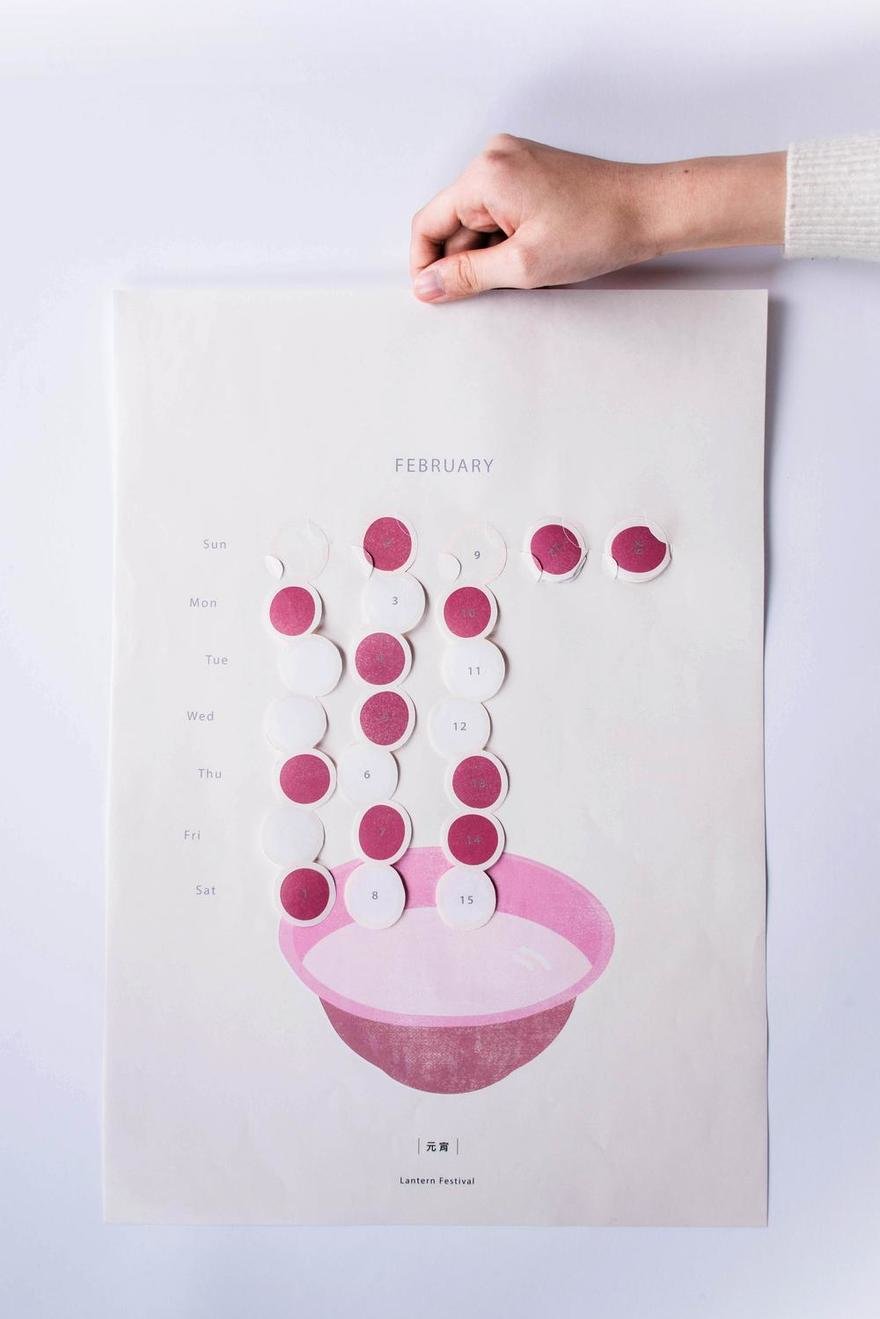 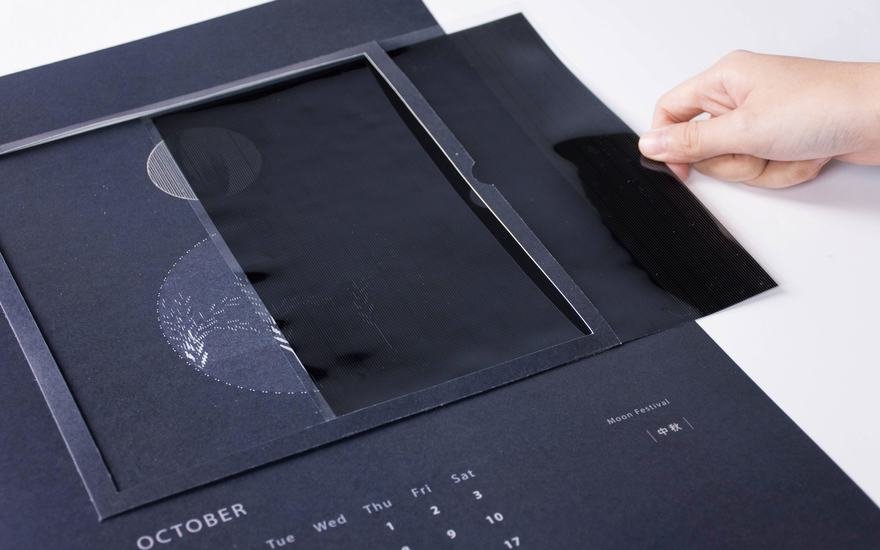 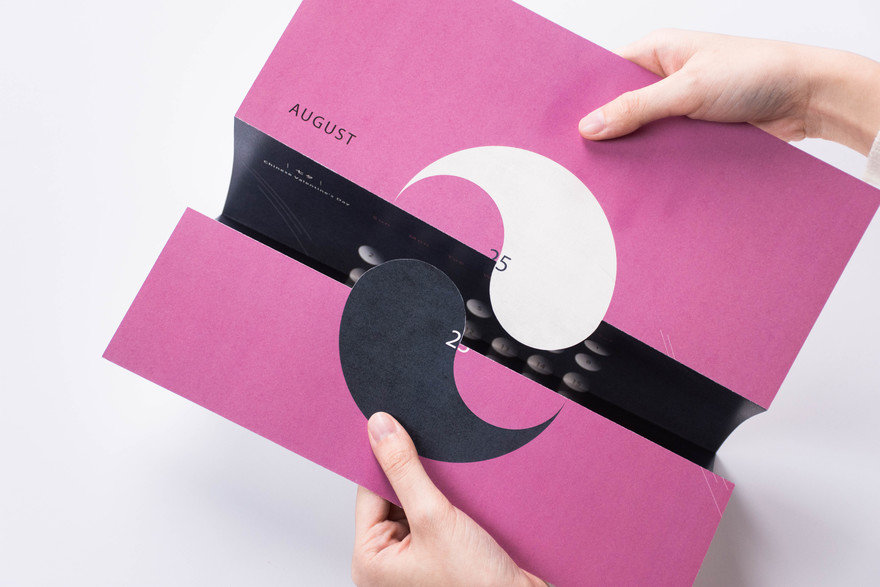 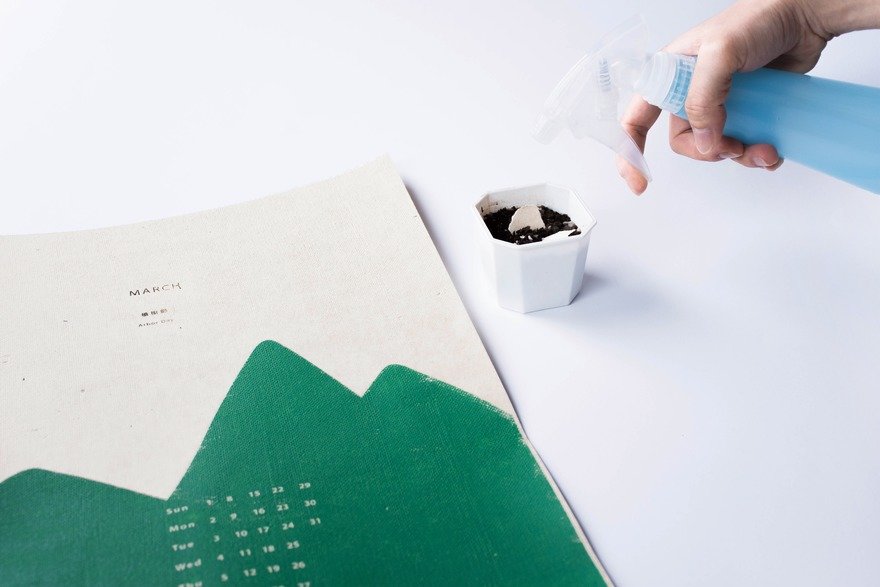 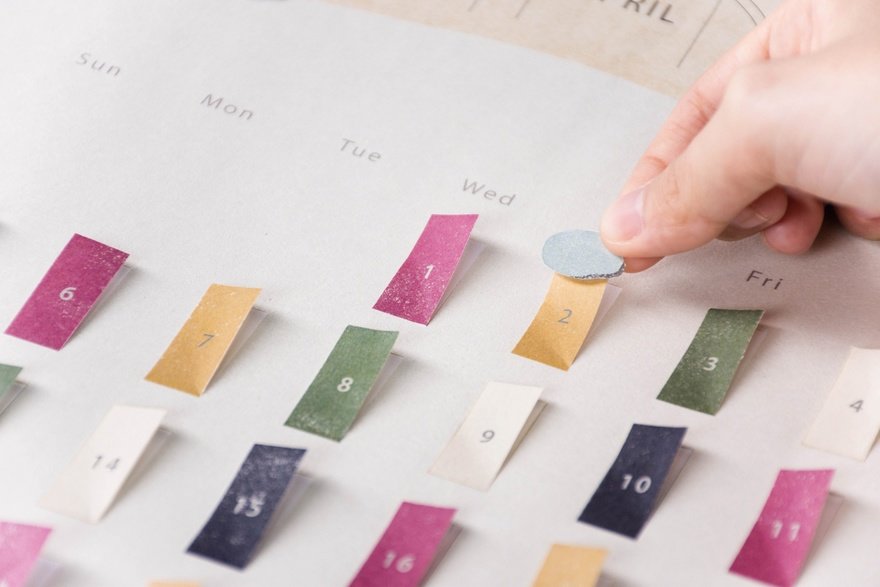 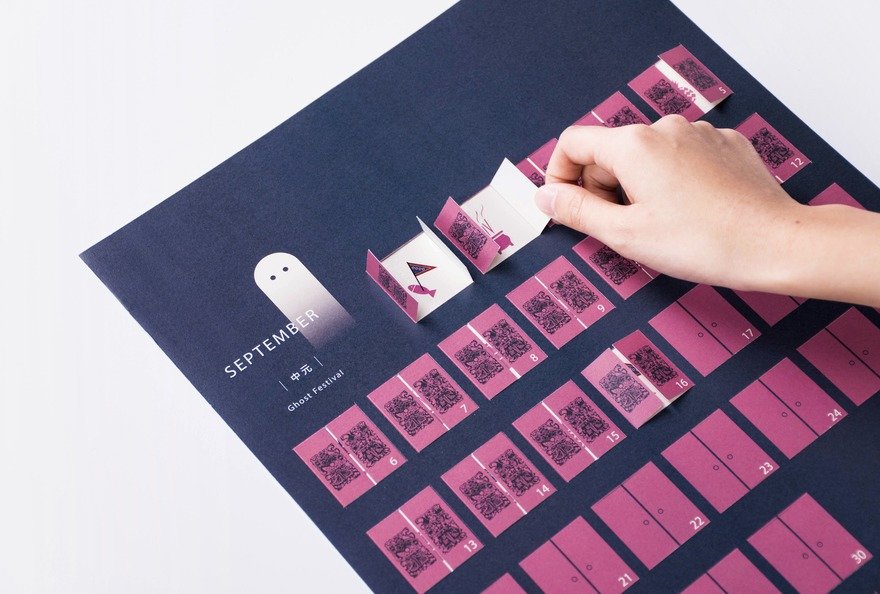 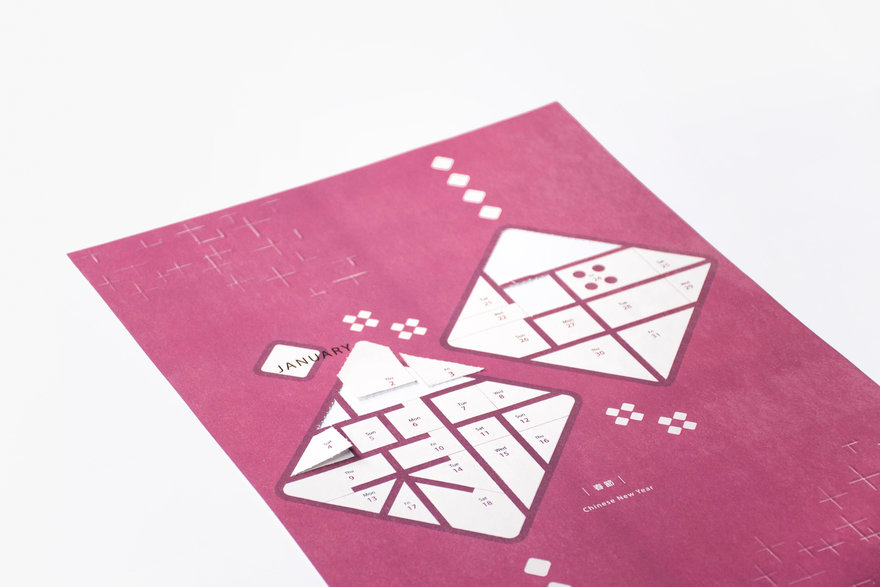 JAN | Spring Festival During Spring Festival(Lunar New Year)in Taiwan, it is the tradition and custom that paper-cut decorations are applied to windows or doors. People glued the paper-cuts to the exterior of windows, so the light from the inside would shine through the hollow space of the cutout, and usually, the paper-cuts symbolize good luck and happiness. Through counting down to 2021 and tearing off the calendar of the past date, the decoration of paper-cuts for Chinese New Year is also completed.

FEB | Lantern Festival In Taiwan, one of the traditions of the Lantern Festival is eating tangyuan (sweet rice ball). The pronunciation of the Mandarin word "tangyuan" is similar to the mandarin word "tuanyuan", which means reunion. When putting down the "tangyuan" paper, the complete dates would be unfolded and shown, which symbolizes that people put "tangyuans" into the bowl.

MAR | Arbor Day In Taiwan, Arbor Day is also the Memorial Day of Dr. Sun Yat-sen's Death (Dr. Sun Yat-sen was a world-renowned revolutionary who devoted his entire life to overthrowing the Qing Dynasty and established the Republic of China.) for memorizing his contributions on advocating the afforestation drive. The paper used for this month was made of cotton pulp and seeds. After this month ends, the paper could be torn into pieces and planted in the soil.

MAY | Labor Day
In Taiwan, Labor Day is the same as International Workers' Day. The date was chosen by a pan-national organization of socialist and communist political parties to commemorate the Haymarket affair, which occurred in Chicago on 4 May 1886. To present the close and inseparable connection between our lives and laborers, the dates would be changed and seen as long as rotating the gear wheel.

JUL | Sailing Day
Taiwan is an island. Sailing plays an important role in history time. The Sailing Day in Taiwan memorizes the first sailing boat carried only by the wind arriving in the United States of America in history. Use the iron to explore every corner on this paper! The brown color shape of Taiwan will reveal on the map when getting heated.

AUG | Eastern Valentine's Day
The seventh daughter of the Emperor of Heaven, the Weaving Maid, and an orphaned cowherd was separated by the Emperor; the girl was forced to move to the star Vega and the cowherd, to the star Altair. They were only allowed to meet on the magpie bridge over the Milky Way once a year on the day of the 7th day of the seventh lunar month - Eastern Valentine's Day. On August 25th, after folding the paper, the yin and yang could join together and become a complete circle, symbolizing that only on this day, the lover from this legend could meet each other.

OCT | Moon Festival Moon Festival is also called the "Autumn Harvest Festival", so while moving the transparent film, people could see the animation of the moon's changing between dim and bright and the moving of rice spike. Since the Moon Festival is on the fifteenth day of the eighth lunar month, the combination of the two circles represents the number "8".

NOV | Tap Water Festival
The Tap Water Festival memorizes the declaration of the law of tap water on November 17th, 1966 in Taiwan. The paper used for this month is the paper that could be written by water repeatedly when practicing Chinese calligraphy. Through the writing process, we hope that the importance and value of water could be presented and recognized.

DEC | Winter Solstice Festival
Taiwan locates in the Northern Hemisphere. The solstice in December marks the longest night and the shortest day of the year, while the Southern Hemisphere has its longest day and shortest night. When touching the dates on the calendar, the changing of the ink shows different lengths of day and night each day. Since Taiwan is founded on farming, the traditional custom of the Winter Solstice Festival contains sticking the red and white rice balls on the foreheads of farm cattle to thank their hard work this year, and as time goes by, this day is also considered the birthday of the farm cattle.