Cortec - service robot to maximize the efficiency of solar parks

Cortec is a service robot concept to increase the efficiency of solar parks. It solves the problem of lack of service personnel and high maintenance costs in the exponentially growing solar industry. Thereby solar parks can produce up to 40% more energy.

The main part of the autonomous robot is the modular vehicle base on which tools for various tasks can be docked. The cleaning tool was the focus of the project, as soiling leads to most losses and the ongoing process offers enormous potential for cost and resource savings. This tool is placed on the modules by a robot arm and cleans the surfaces with the help of water and brushes. A circular system with a filter ensures tremendous water savings.

On a large scale, multiple robots can work in a swarm. Therefore, the infrastructure of future solar parks was considered as a complete system. 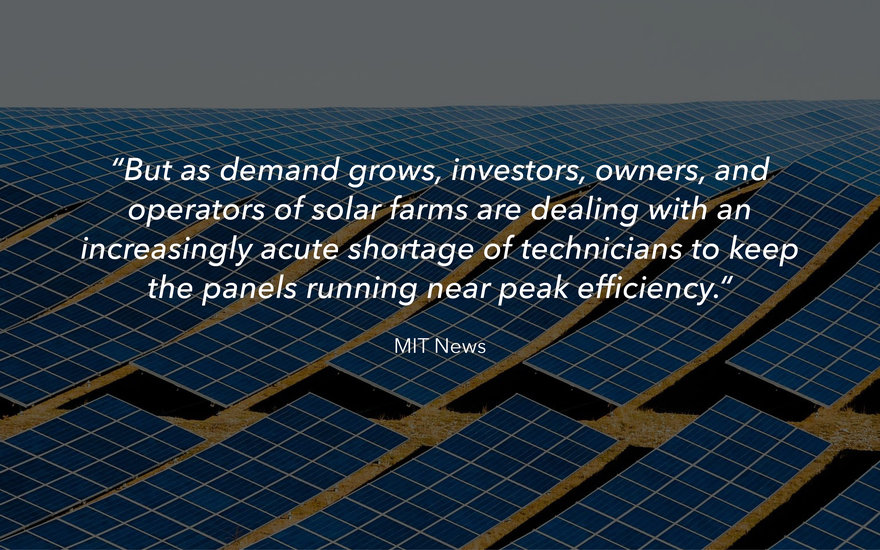 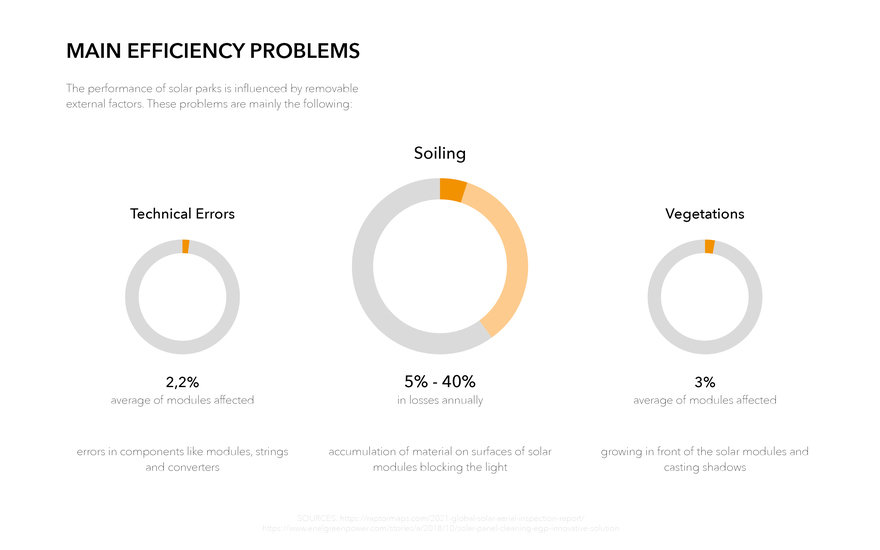 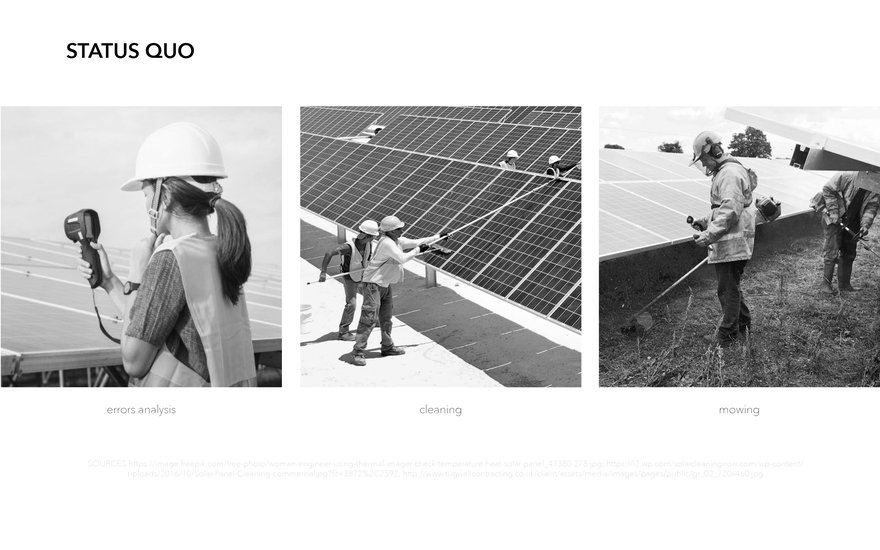 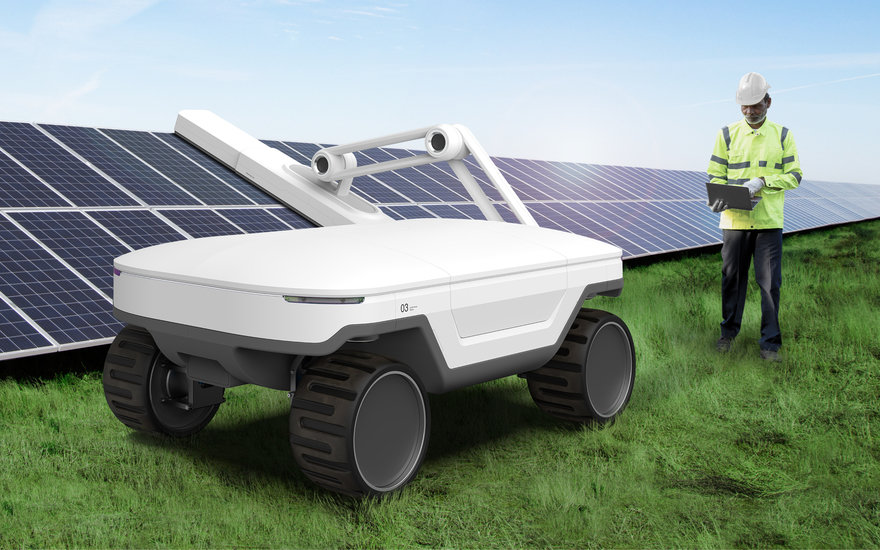 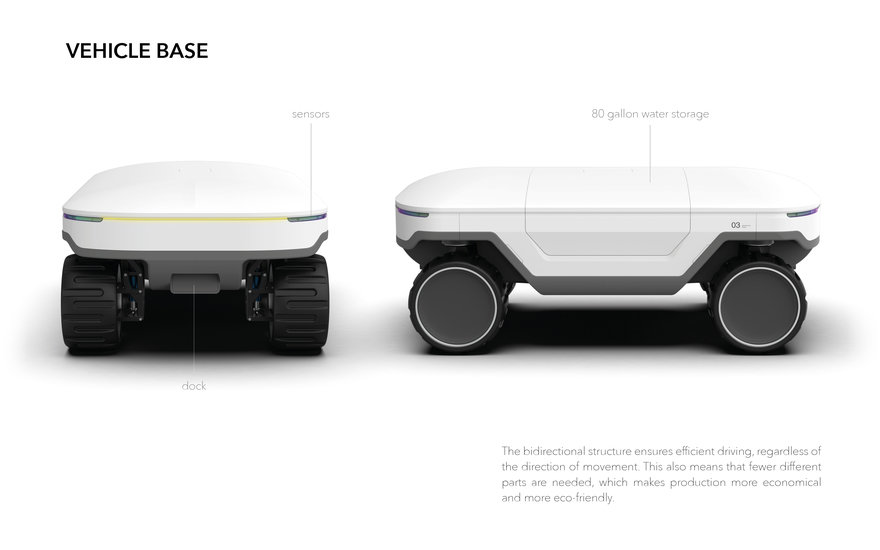 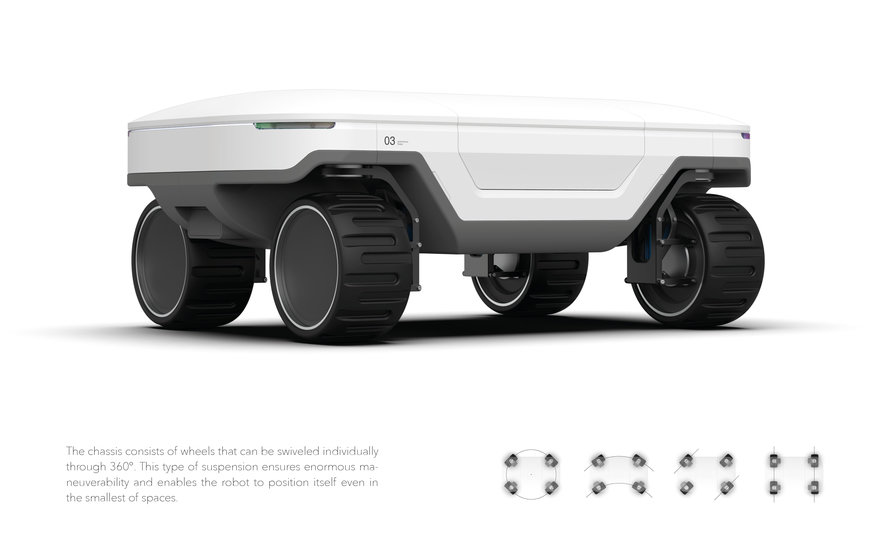 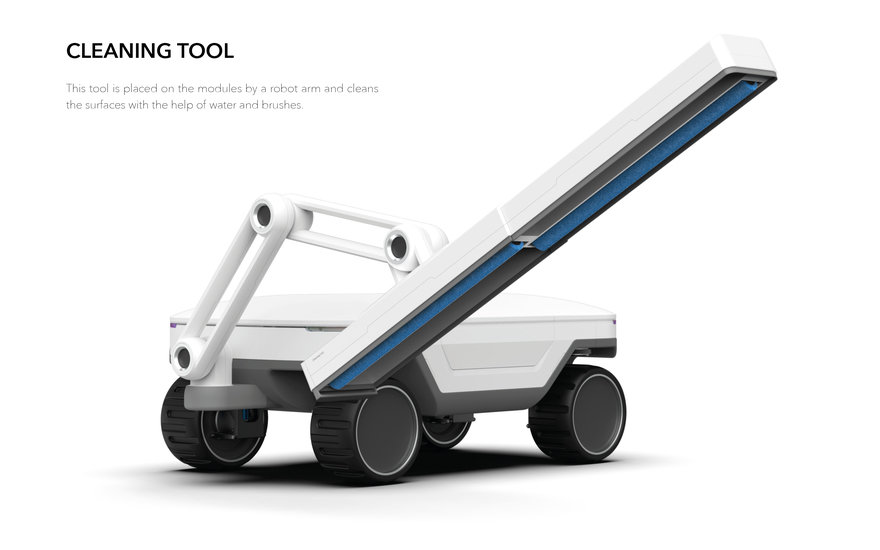 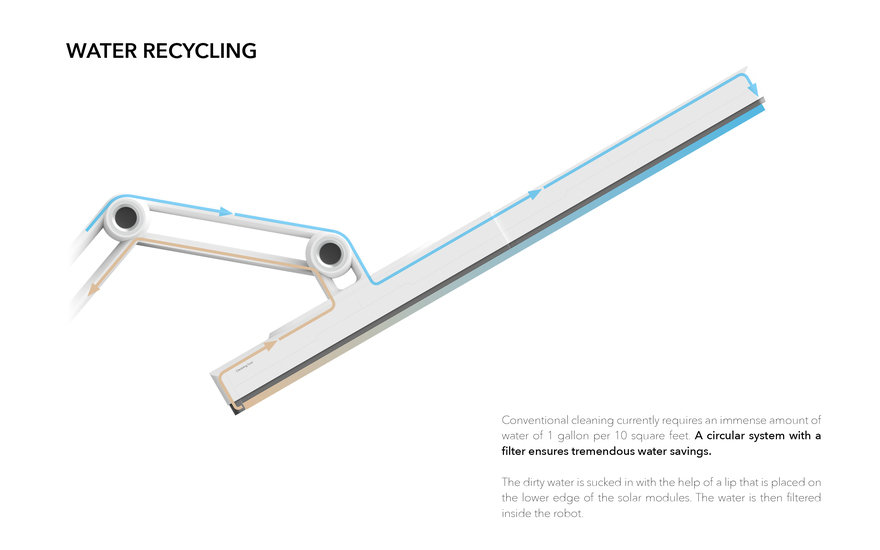 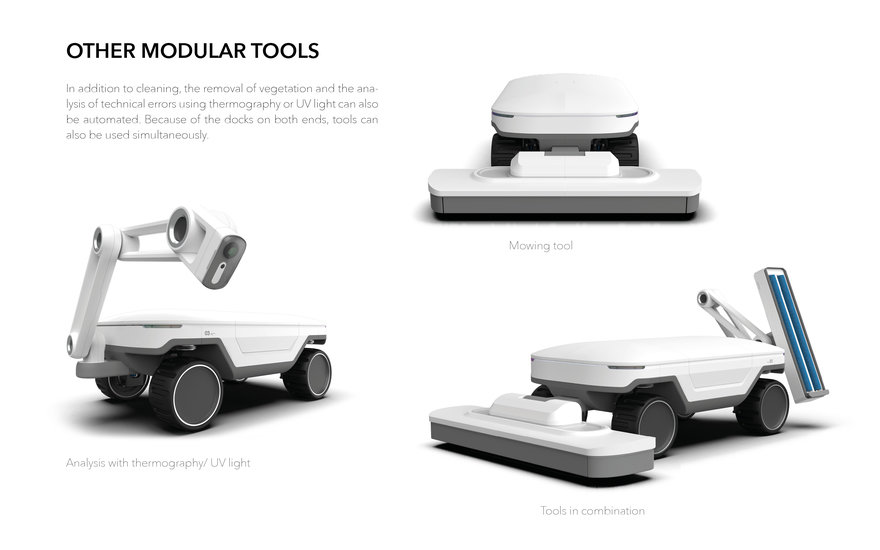 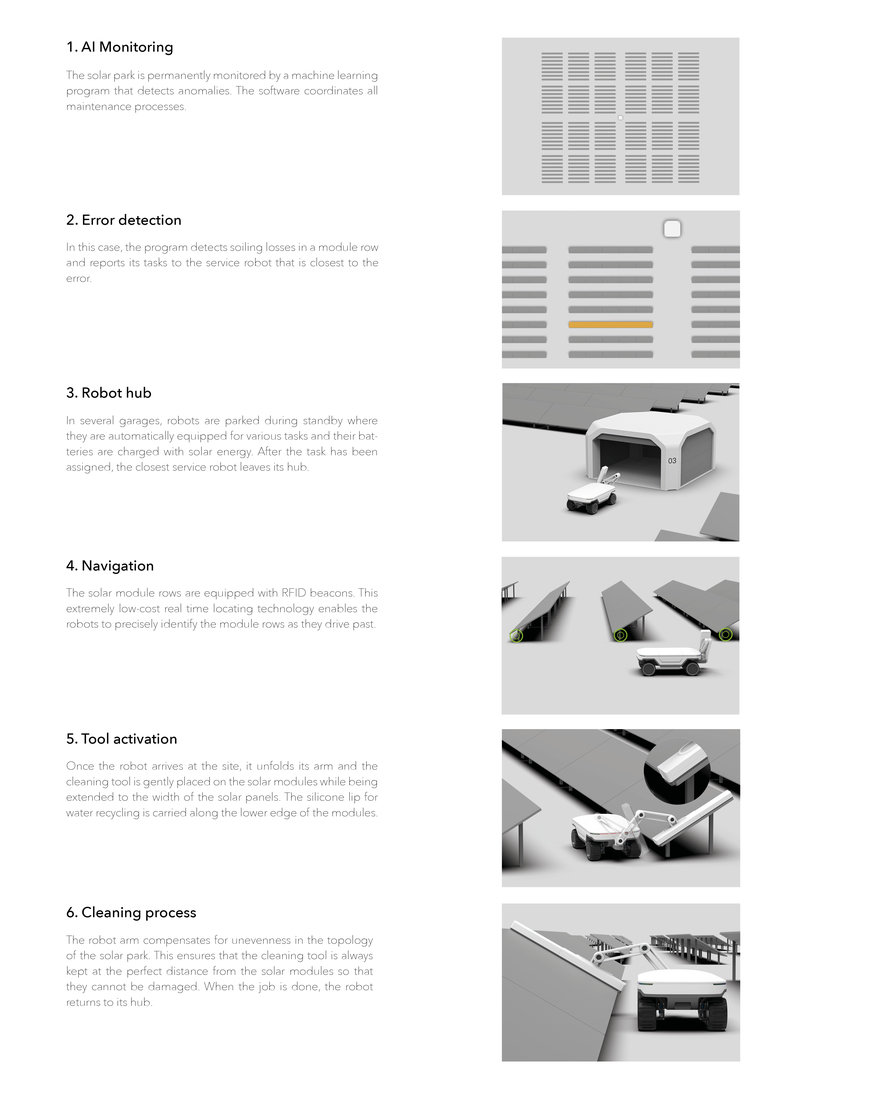 SYSTEM DESIGN AND USE SCENARIO

The International Energy Agency predicts that solar will be the largest source of energy by 2050. To achieve this goal, solar parks will also get much bigger.

„So far, there has been a lack of visions that outline how these gigantic future solar plants can be operated efficiently, since the current methods are not very scalable and ineffective." Sunlumo CEO Robert Buchinger explained.

MIT News stated: "But as demand grows, investors, owners, and operators of solar farms are dealing with an increasingly acute shortage of technicians to keep the panels running near peak efficiency."

The performance of solar parks is influenced by removable external factors. These problems are mainly the following: soiling, technical errors and vegetations. With 5% to 40% in annual losses, soiling is the most serious. The influence depends strongly on the location, but generally countries with the best exposure to sunlight are most affected.

The service robot concept Cortec shows a novel holistic approach, how modular robots can solve all these problems. The robots can be used to analyze technical errors, remove vegetation and clean solar modules. This compensates for the lack of service personnel and drastically reduces maintenance costs, which means that more green electricity is generated at a better price.

BENEFITS TO THE USERS

Even if the robots act completely autonomously, they still work together with the service staff on site. Cortec mainly takes on repetitive tasks that previously had to be done with high physical exertion. In addition, the robots can do more precise work, which prevents damage caused by carelessness and inappropriate tools. Especially cleaning services often work by hand or with improvised tools, such as excavators equipped with brushes, which can quickly damage the modules due to a lack of precision.

The reduced workload allows technicians to focus entirely on the most difficult task to automate: repairs. Here, too, Cortec plays a key role. Machine learning programs can already remotely localize errors based on the energy output. During cleaning or mowing work, the robots can analyze these errors on site with the help of thermography and UV light. With this information, technicians know in advance where the fault is and what type of error exists. This way, suitable spare parts can be delivered immediately and the technician only has to bring equipment that is actually needed.

BENEFIT TO THE CLIENT

The business impact arises from two aspects. On the one hand, the cost of maintenance is drastically reduced. This is particularly evident in western countries. According to interviews with German cleaning services, one professional cleaning can cost up to 3% of the annual revenue of the solar park. Therefore continuous cleaning has so far been economically unthinkable.

With Cortec, maintenance can be carried out permanently and extremely effectively, which in turn increases the efficiency of the solar parks. The additional energy yield ensures more profit, since even a few percent correspond to millions of dollars in large facilities. Therefore, the service robots can be amortized within a few years.

The semantics of the design had to be well-balanced between robust and powerful versus friendly, high-tech and precise.

The matt white color ensures good visibility and, in combination with the curved surfaces, gives the robot a friendly appearance. Angular structures in the shape and the dark gray bumper communicate stability and durability. Concentric circular structures on the wheels or joints of the robot arm convey precision and ensure a uniform design language. Prominent aluminum rings on the joints of the robot arms convey stability, while the openings in the arms communicate lightness and indicate the circular water recycling. Large wheels in the wide-cut wheel arches ensure off-road mobility.

For active communication with the staff on site, the vehicle is equipped with LED lights at both ends, which give signals to indicate actions or to display warnings.

The ecological implications of Cortec can be well illustrated with a calculation. In this example, a solar park with a capacity of 100GWp is considered, which generates 1200kWh of electricity per kWp. For comparison: the largest solar park in the world has twenty times the capacity/size.

With an efficiency increase of 5%, this solar park could supply 1970 additional households with electricity and offset an extra 6,770 metric tons of CO2 emissions per year. Notably, increases of up to 40% are possible.

In addition Cortec also saves resources. This primarily includes water, as around 1 gallon of water per 10 square feet of module surface has been required for effective cleaning. The cleaning tool has been designed with a water recycling system that can drastically reduce water consumption. The robot itself charges its electrical energy directly from the solar park.