In early 2021, ChiByDesign was engaged by the Community Food Navigator to utilize a community-centered and participatory design approach with Black, Brown, and Indigenous urban growers, food producers, and organizers. The aim was to understand their unmet needs and opportunities to support improved information, wisdom, and resource sharing among people growing and producing food in the Chicago region. The project sought to co-create ways to collect, curate, and steward the use of shared community knowledge and resources based on how people in communities with the greatest food inequities define, generate, and retain value among their communities. To achieve the purpose, we facilitated co-design workshops which included a range of participants, including growers, food producers, policymakers, advocates, organizers, youth growers, small food business owners, and distributors. The result was the framing of this work as community-led food systems and a grounding of this project's vision and values rooted in the contributions of those with first-hand experience navigating the inequities of the Chicago region food system.

Inspired by and built upon the research that the Chicago Food Policy Action Council (CFPAC) started in 2019, the project seeks to connect people who contribute to the Chicago region's food system. A system that works for all, especially those in communities fighting inequities to grow, process, produce, distribute, donate, or buy fresh, local food.

In 2017, one out of six Chicago residents was at risk of being food insecure, but in predominantly Black and Brown neighborhoods on the South and West sides of the city, food insecurity affected 56-85% of the population. The COVID-19 pandemic intensified food insecurity worldwide and in Chicago, food pantries saw a 150% rise in people searching for their next meal. The pandemic further illuminated racial disparities. Black families experience food insecurity at double the rates of white families in our city. Structural racism, a collection of institutional, historical, cultural, and interpersonal practices, has led to intergenerational inequity and, specifically, disconnection from the food system for Black and Brown Chicagoans.

The workshops brought forward the stories of stakeholders within the food ecosystem and their experiences in growing, producing, processing, distributing, and consuming food. Participants also explored connections to policies to inform product and system-level decision-making about interventions and future policies. These workshops provided the Community Food Navigator an opportunity to hear directly from those leading and working in the system and uncover foundational principles to co-design a future in service to communities facing the most significant food inequities. 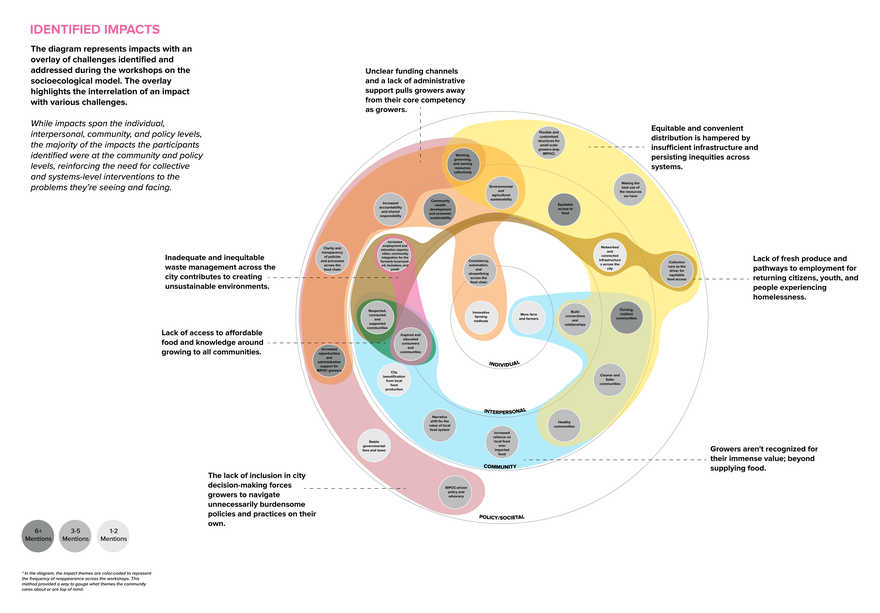 These images capture a number of the activities workshop participants engaged in. Left: Value mapping activity from a session.Top Right: Activity highlights needs/challenges faced at different stages of the food journey by growers, distributors, and other actors within the food system. Bottom Right: People, Objects, Environments, Messages, and Services (POEMS) framework to think through the specifics of the HOW for the challenge.

This visual shows the connection between challenges identified by co-design workshop participants, the new futures they imagined, and the interventions they prototyped to realize those futures. 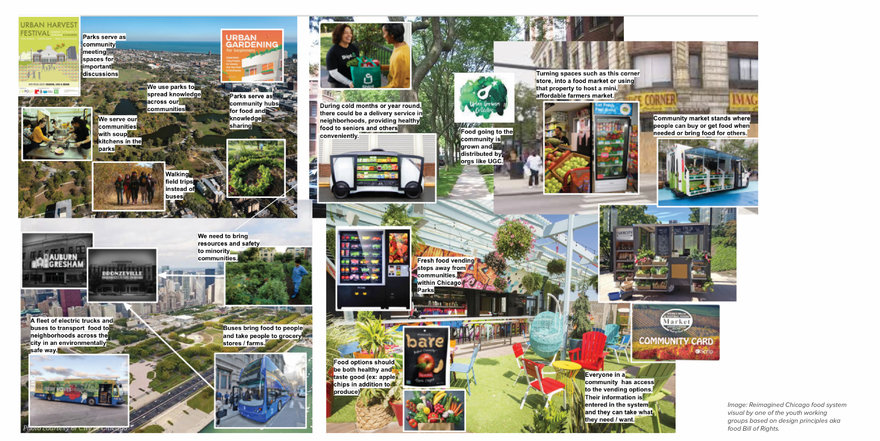 In partnership with a Farm Training Program, the team engaged youth to contribute their valuable perspective to shape the project. This work includes Black and Brown growers who will engage with and lead a more equitable food system in the near future. We adapted a 'Youth Food Bill of Rights' created by students in an existing farm training program as design principles to ground the conversations as we envisioned a 'new Chicago.'

"Tell the story of the scale (of the inequities), bring visibility to decision-makers so we can't be ignored anymore."

The Community Food Navigator project is critical because capitalistic modes of production, racism, and disinvestment in BIPOC communities have created immense challenges for BIPOC residents, especially growers within Chicago's food ecosystem. "For nearly a century, racial discrimination in agriculture, exclusion from federal relief programs, and laws that preyed upon the economically disadvantaged have slashed the number of Black farmers in America from the nearly one million who farmed in 1920 to fewer than 50,000 today." The rise of the industrial food system coupled with the systematic exclusion of BIPOC farmers and communities from food production has created a series of health, wellness, and economic challenges.

In Chicago, Black residents suffer from obesity (40%), hypertension (37%), and account for diabetes-related deaths (80 per 100,000) at double the rate of non-Black Chicago residents. Though there are many contributing factors to these chronic diseases, a through-line is access to healthy food. "African Americans make up approximately one-third of Chicago's population, but almost 80 percent of the population of persistently low or volatile food access areas". The systematic exclusion of BIPOC Chicagoans from the food ecosystem has contributed to disastrous outcomes for this population. It also punctuates the necessity of having these communities be the designers and leaders of a future food ecosystem rooted in equity. Our practice at ChiByDesign exclusively focuses on situating individuals and communities most affected by challenges as the protagonists in the process of designing interventions.

We aimed to highlight growers' experiences, the challenges they face, and possibilities for an equitable future. Based on historical and current inequities, trauma, and harm, it was necessary to create a space to build trust between various stakeholders, share power and situate them as leaders for creating the future food system based on equity, healing, and collectivity. We conducted nine virtual co-design workshop sessions with 39 stakeholders— growers, community food advocates, and community partners (urban growers and food producers, social enterprise and small business leaders, people working in policy, human services, food security, public health, academia, mutual aid, and community gardens). As the project advanced, we realized that we were missing a critical voice, young people, as they are stewards of the future, and their perspective is crucial in the success of the new equitable food system. We then added two co-design workshops to the series with ten youth in partnership with a farm training program.

The 11 workshops and 15 individual conversations with community participants confirmed that:

Capitalistic modes of production, racism, and disinvestment in BIPOC communities create immense challenges for BIPOC growers within Chicago's food ecosystem. Racist and capitalist norms have led to practices and mindsets that reinforce individualism and protectionism across the food system. These biases, prejudices, and racist mental models impact growers' relationships with consumers, preventing some from patronizing or supporting food producers of color.

There is a need for cross-sector collaboration to address the overarching challenges related to capitalist modes of production and racism manifest in tangible ways. To create and maintain sustainable conditions and just systems, BIPOC growers require a cross-sector coalition of supporters (government, private enterprise, NGO, philanthropy, community and individuals) who aid them in advocating for favorable policies and implementing methods suitable for urban growing.

There is a disconnect between what is valued and invested in by those who control needed resources (environmental, capital, human) and those who seek those resources for more than financial or economic gains. There is a need to rethink what is 'valuable' and shift mindsets to prioritize collective wellbeing, economic and environmental sustainability, and reparative wealth redistribution.

Visions of an equitable food ecosystem

The thoughts and experiences shared throughout the engagement were amalgamated into growers' and other stakeholders' visions for the future of the food system rooted in racial equity and the principles needed to actualize them. These visions have become the five values in which the Community Food Navigator is rooted.

A sovereign food system is one in which the people who produce, distribute, and consume food also control food production and distribution mechanisms and policies. This stands in contrast to the present corporate food establishment, in which corporations and market institutions dominate the global food system.

Community developed models of care replace "trickle down economics" to redefine interactions in the social, civic and business sectors.

Creating a thriving ecological economy with opportunities for communities to become autonomous by building circular, sustainable infrastructures and integrated solutions.

Educating consumers about their food system can be empowering and increase food literacy, while showing the value created from growing.

The following were identified as principles by which the Community Food Navigator should create interventions that serve the needs of Black and Brown growers:

BIPOC growers should have the agency to drive decision-making about policies, processes, and structures that directly impact them and their businesses.

Increase clarity and transparency of processes and policies

The system needs to provide enhanced clarity and transparency for policies, processes, and procedures across the food chain for easy navigation for growers and all stakeholders within the food system.

Stronger interpersonal, community, organizational and societal relationships across the food chain need to be created to build a connected, transparent, supportive and robust food system.

Equitable economic opportunities must be created for BIPOC growers to gain more financial stability for themselves and their businesses.

BIPOC growers need reparational, infrastructural, and institutional support along with power to direct policies that will provide optimal value to local communities and their residents.

New infrastructure must be built and/or existing spaces reimagined to support equitable distribution of food to communities.

Priority alignment and relationship building between private and public institutions and small-scale growers is key to creating a supportive partnership.

We must build systems and infrastructures that remove the strain on growers and create self-sustaining support and economics.

Growers require educational programs and infrastructures to grow their practice and expand opportunities in the field. Similar structures are also needed to shift mindsets to more local and sustainable modes of consumption.

We facilitated prototyping workshops to provide growers and other stakeholders opportunities to critically analyze and prototype equitable futures driven by challenges identified as the most detrimental to communities facing food inequities. The workshop participants envisioned ideal futures and sought to detail the infrastructure of the imagined future through design.

The outcomes of the prototyping and discussions helped the Community Food Navigator team to visualize impacts to be created, actions needed, and specific resources needed to enable the achievement of the envisioned future to advance food sovereignty, mutual care, and economic opportunity.

The Community Food Navigator is community-powered and addresses challenges within the food system, such as accessing land, water, infrastructure, and funding. It advances food sovereignty, mutual care, and economic opportunity through supporting community-led food production by Black, Brown, and Indigenous growers and food producers. Operating through a community-stewarded model, the Community Food Navigator prioritizes sharing, protecting, and utilizing data to amplify community-led efforts and directs resources to grow and sustain them.

Rooted in the values of stewarding equitable opportunities, collective care, circularity and sustainability, food sovereignty, and education, the Community Food Navigator connects people who contribute to an equitable Chicago region food system, especially those actively fighting inequities. It seeks to build a collective voice, design collaboration tools, and foster new ways of connecting and exchanging while amplifying the work of the Chicago region's growers, community organizers, and residents.