"émoi" is a service and "data gustation" interface that takes advantage of today's digital systems (ie. e-commerce, ubiquitous computing, sentiment analysis algorithms) in order to reinvent the longstanding tradition of sharing and gifting chocolates as an expression of interpersonal attitudes and feelings.

émoi allows its user to create an edible representation of their emotions via a representation language that is based on existing crossmodal research (experimental psychology) involving the human gustatory and oral somatosensory experience.

As a result émoi lets the user communicate their sentiment using appropriately designed qualities of taste, texture, shape and colour as presented through the chocolate medium. 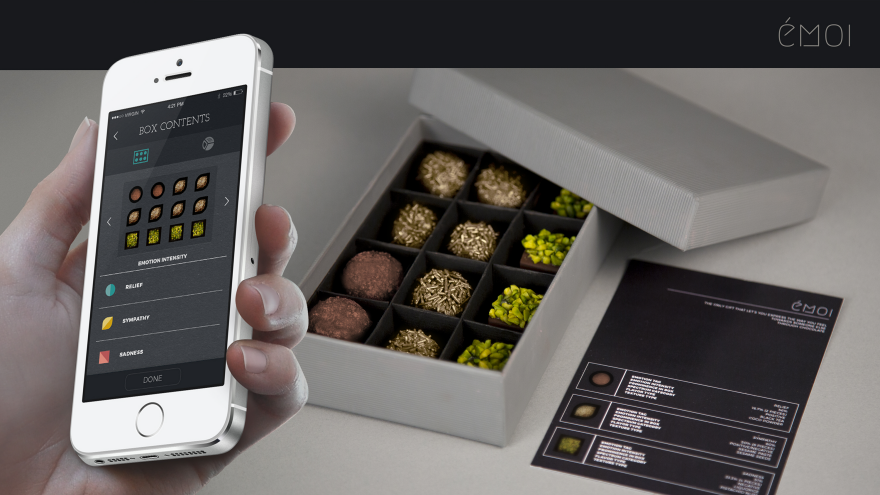 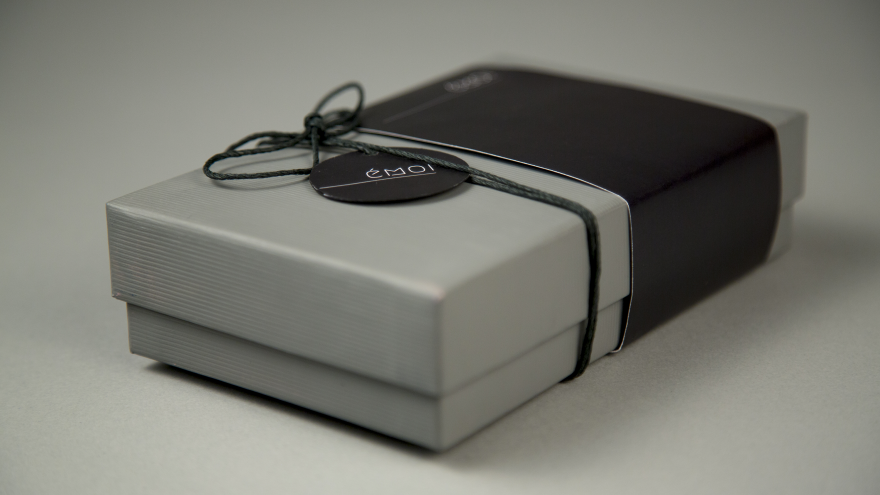 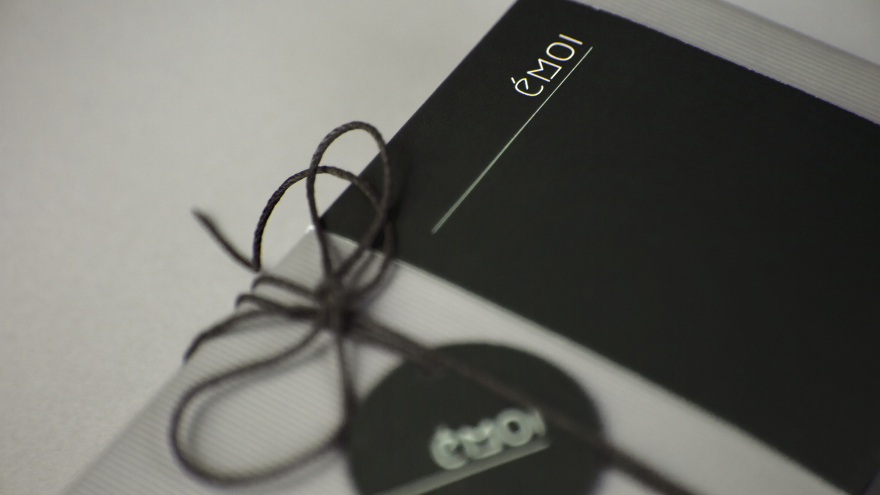 In a world where harnessing data to gain ultimate efficiency has become an obsession, émoi empowers the end user to manipulate their own data to create simple, honest and sentimental forms of expression. To do this, émoi takes today's widely-implemented sentiment-analysis algorithms, used by many companies to analyse customer and audience sentiment towards their services, and repurposes them for use in a more personal and playful context. Using émoi the user can extract the emotional content of their expressive messages towards a recipient, and use that as a basis not only for a "data visualisation", but for a "data gustation" of their emotions in the form of chocolate.

émoi is inspired by local Swiss artisanal chocolate producers, because unlike the generic chocolates we get from most commercial retailers, artisans use a vast selection of flavours in producing their creations. From rums and champagnes, to fruits and herbs, to peppers, spices and teas, the available options are practically endless. And this diversity of flavours lends itself perfectly to the creation of émoi's "data gustation" language.

émoi uses research into psychology, the human gustatory and oral somatosensory experience to create the emotion classification system it uses as well as for designing the symbols representing each of these emotions. This design was further developed through the study of scenarios and terms that people use when expressing attitudes towards one another. in particular, émoi references social conventions in its design in order to foster intuitive understanding by the user, for example using strawberry to express love and chilli to express anger.

As a species, we have naturally evolved (for survival, social and ritualistic reasons) to be quite good at defining and distinguishing between the states and flavours in the food we eat. Our sensory system has been fundamentally shaped by our need for food, that our eating habits have evolved to be intrinsically tied not just to our biological state but even to our emotional experiences. So, in expressing emotion, isn't it just as plausible to use food as the medium for creating symbols and meaning just as we do with visuals and graphics?

well, émoi does just that.

émoi was designed to provide an interface that is both simple and customisable for the user. There product definition process is meant to be carried out in three simple steps. In the first step the user can provide a message or manually select the emotions they wish to communicate. In the second step the user can define the intensity of each emotion, and the dominance of their selected emotions over one another. In this step the user can also visualise how the selected emotions are translated into chocolate flavour, texture and shape. In the last step, the user can customise the 'secrecy level' of their communication, allowing them to choose to be open and candid or anonymous and secretive.

First, the user selects one of three methods to define the emotions they wish to communicate to their recipient. The user can choose to create a message (either written or audio) directed to their recipient, which is in turn used by a émoi's integrated sentiment analysis algorithm to extract the related emotions. Alternately, the user can manually input their desired emotion by selecting them from a list or searching for them. There are 22 distinct emotions available, each of which with a variety of related tags for similar sentiments and attitudes. All the emotions are broadly categorised into 3 sections: positive, mixed, and negative.

Upon defining the selected emotions, the user can then adjust the representation of the related in the emotion in the box of chocolates. For example, the user can control the intensity of their selected emotion and dynamically visualise how this affects the corresponding chocolate's texture (more intense = more texture). If the user is conveying more than one emotion in the box, the user can define the 'predominance' of each of the emotions by adjusting the amount of times it occurs in the box. This predominance value can also be visualised as a percentage in a pie chart. If the user selected positive emotions, the corresponding chocolate shape would be round. If the user selected a negative emotion, its corresponding chocolate shape would be angular. While if the user selected a mixed emotion the resulting chocolate would be a angular-round combination shape. The definition of these shapes is based on existing research into psychology (ie. Bouba/Kiki effect). In this section of the interface, the user can also see access a visualisation of the final chocolate outcome, as well as access both the flavour and texture ingredients of their chocolate. Each of the 22 emotions is designed to match a specific flavour / texture combination that is defined based on existing research of multimodal perception in experimental psychology, as well as user research and surveys.

émoi is suitable for classic scenarios where a sender would like to offer a present in the form of chocolate. These include love (ie. valentines, anniversary, general affection), celebration (ie. graduation, birthday, weddings), empathy/sympathy (ie. get well soon, condolences). However, émoi also has a unique capacity to allow the user to gift chocolate in more personal and even unusual contexts. For example, émoi chocolates could be presented anonymously from a person wishing to express negative feelings to someone else.

émoi aims to allow the user to exercise their own creativity and freedom in creating their own forms of emotional expressions, and in the degree of openness or covertness that they please.

Finally, émoi also allows the recipient to experience a new form of information representation that transcends the visual sensory modality. émoi aims to allow the user to experience data (emotion) representation in the form of a gustatory and oral somatosensory language, utilising flavour, texture, shape and colour as its symbols, icons and information conveying qualities.

The development of this project placed a significant focus on studies into the psychological ongoing of human sensory perception, with a particular focus on the oral and gustatory sensory capacities.

The research concept however first emerged from a desire to address sensory capacities beyond visual perception. This is because as many (ie. Hiroshi Ishii, Mark Weiser) in the field of HCI and technology have often noted, we place an unbalanced preference towards visual and graphic representation in the design of our interfaces today. As a result, I sought to explore other sensory mediums and how they could be used to communicate data and information to the user.

I eventually was drawn towards food based mediums because of their inherent ability to encompass a multimodal sensory experience (ie. taste, tactile texture, visual perception and smell). In addition, the human ability to discern and distinguish between values in the realm of gustatory and oral somatosensory perception is significantly advanced as a result of our ingrained human dependence on food-based nourishment.

I found that the gustatory and oral somatosensory modalities were also particularly interesting and effective mediums because of research that showed how we as humans have an generally inherent ability to attach consistent meanings to tastes and textures in food experiences. Such research as conducted by Dr. Charles Spense from Oxford's Crossmodal Research Laboratory have shown that bitter flavours, rough textures, dark colours and angular shapes are generally associated with negativity and large physical properties and terms, while sweet flavours, smooth textures, warm colours, and round shapes are associated with positivity and small physical properties in terms. Such research is firmly rooted in the "Bouba/Kiki effect" concept as first proposed German-American psychologist Wolfgang Köhler in 1929.

In addressing the data that is to be communicated by this gustatory representation system, I chose human emotion. This is because the relation between what we eat and what we feel has long been perceived as being intertwined. This strong relationship with emotion is also why I chose chocolate as the particular food based medium. Furthermore, unlike many other foods, chocolate has a unique capacity to be exceptionally malleable in terms of the way it is can be combined with such a diverse variety of ingredients, flavours and textures. This further allows for a diverse palette of qualities to choose from in the information representation design.

In addressing the emotion definition and categorisation system utilised by the service, I referenced some of the most widely used systems by both psychologists and already existing digital sentiment analysis systems (ie. Geneva Emotion Wheel, Robert Plutchik emotion wheel).

This was an interesting experimentation, and the jury was intrigued by the possibility of connecting emotions and taste/eating sensations.