High-Speed Horizons is a design fiction critically exploring innovation, big thinking, and technological progress through visions of flight and the alternative energy sources of sonic booms and nuclear power.

Man has always looked to the sky to push the boundaries of possibility through innovation and new technologies. The concept of controlled flight has always been viewed as a test bed for radical new ideas and visions to reshape culture, politics and economics here on Earth and far beyond it. By using the rich history of manned flight as a platform, High-Speed Horizons critically investigates our historical and ongoing pursuits to find more sustainable energy sources to petroleum and what would need to change to achieve this ultimate goal.

Taking two world changing developments, the breaking of the sound barrier in 1947 and the Cold War arms race to develop a nuclear-powered aircraft, High-Speed Horizons constructs counterfactual trajectories exploring the potential of new energies and offers a reassessment of culture, economics and politics through the creation of scale model aircraft, analog renderings depicting the various aircraft in speculative scenarios and a dedicated project website (highspeedhorizons.org).

To explore the potential of sonic booms as an energy source, sonic boom-powered counterfactual research aircraft are incorporated into the already highly experimental and speculative early days of the American X-Plane program. Set up by the U.S. government following WW2 and still in existence today, the highly influential X-Plane program was not only behind breaking the sound barrier but also initiated NASA and will one day aid in putting a man on Mars. The counterfactual history culminates with Boomjet, a contemporary sonic boom-powered commuter jet which finally unlocks sustainable and accessible supersonic travel for all.

To probe the invariably controversial advantages and disadvantages of nuclear energy the once top secret nuclear powered aircraft is resurrected from its demise during the Cold War to align its potential with the grand visions coming out of today's Silicon Valley. With today's technology companies increasingly becoming the target of government inquires over how they can operate and innovate the tech sector could take to the sky to further innovation free from the restrictions of regulation utilizing a never landing nuclear-powered aircraft. This concept is explored through Air Laissez-faire, a speculative self-piloting always airborne nuclear-powered free enterprise aircraft that operates out of the jurisdiction of governance and sovereign airspace. As today's tech sector offers up increasingly radical visions to shape the future, Air Laissez-faire may not be as far fetched as one would hope.

The history of aviation is full of dreams of alternative futures. Some came to fruition, while others did not. Research and development in this field continues to cost more that almost anything else on Earth and its innovation is as equally awe-inspiring as it is destructive. While the funding and intentions for flight are often controversial one thing can not be argued, the sky will always give us room to dream. 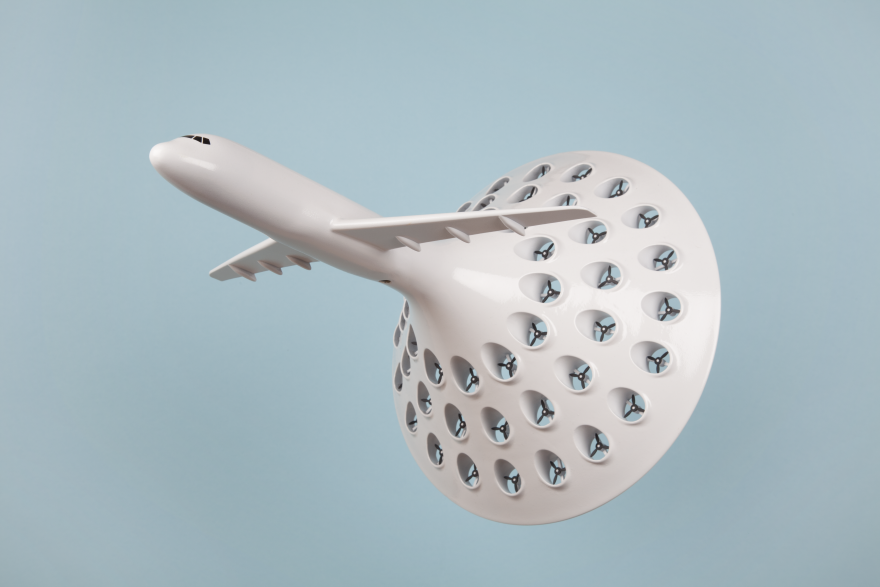 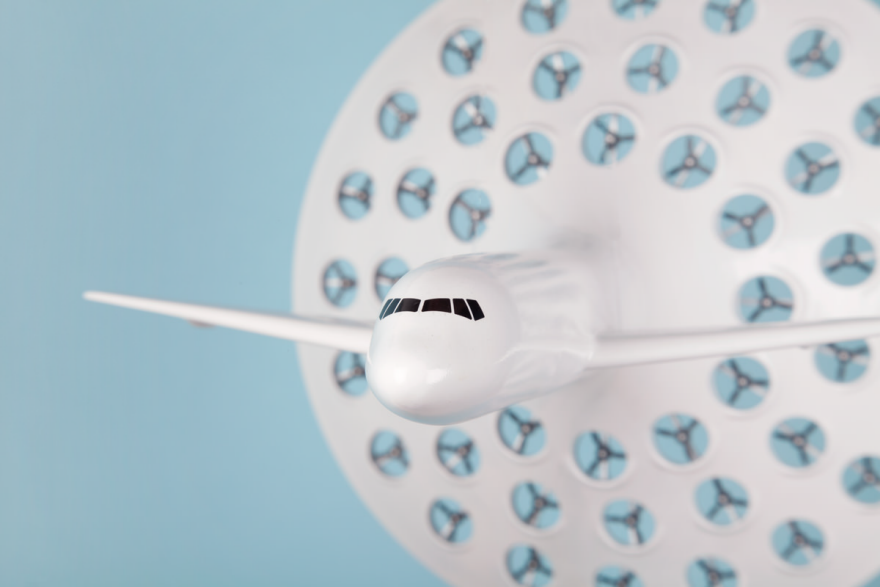 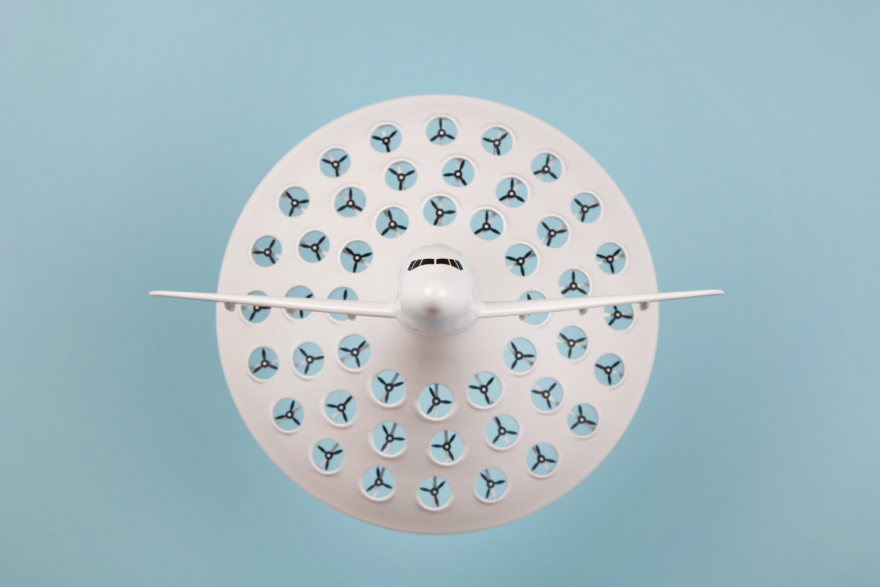 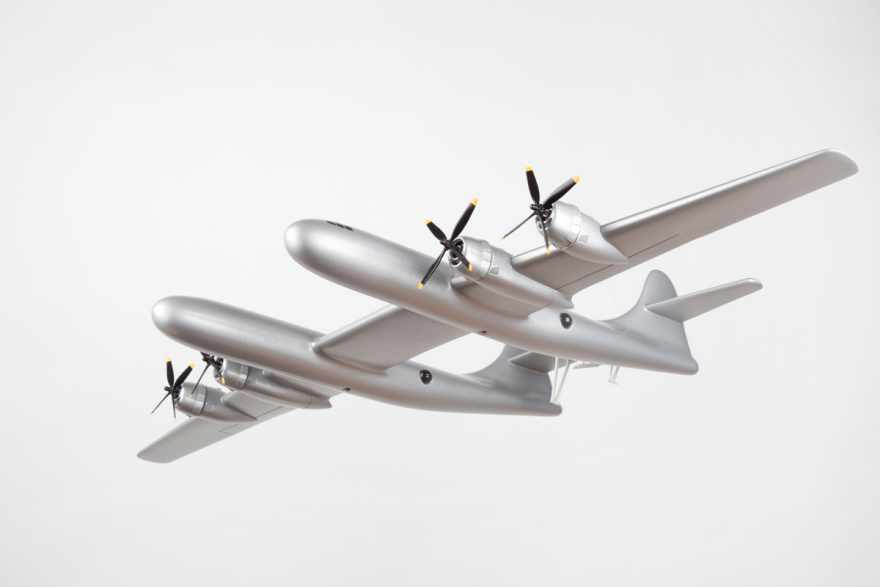 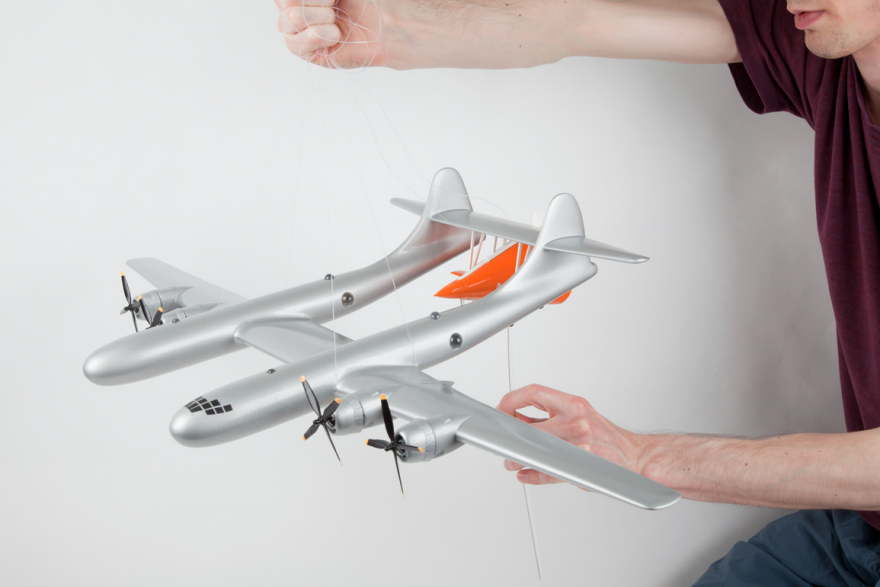 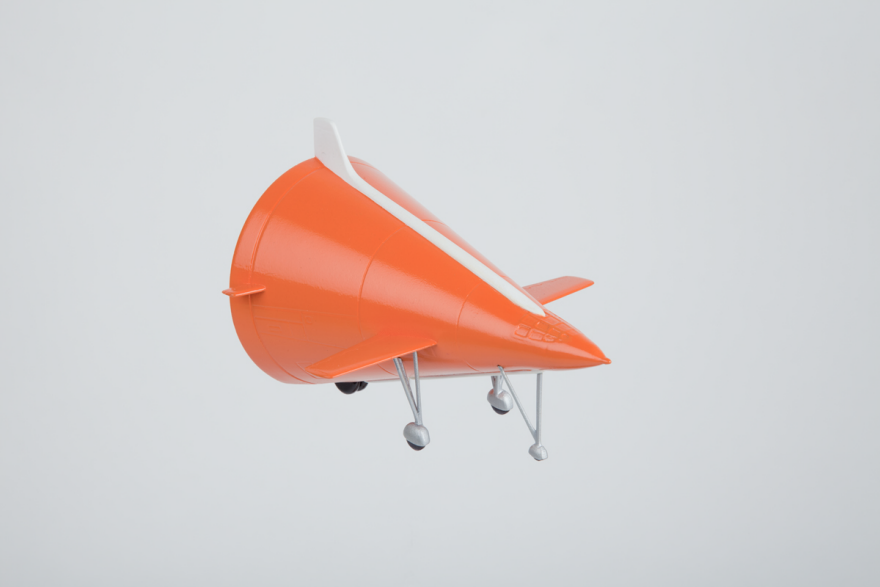 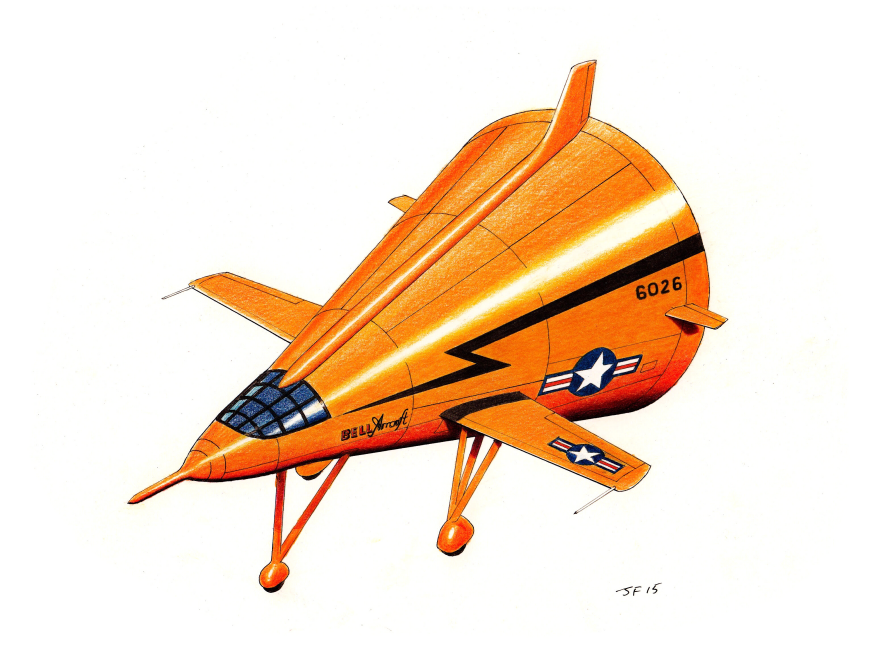 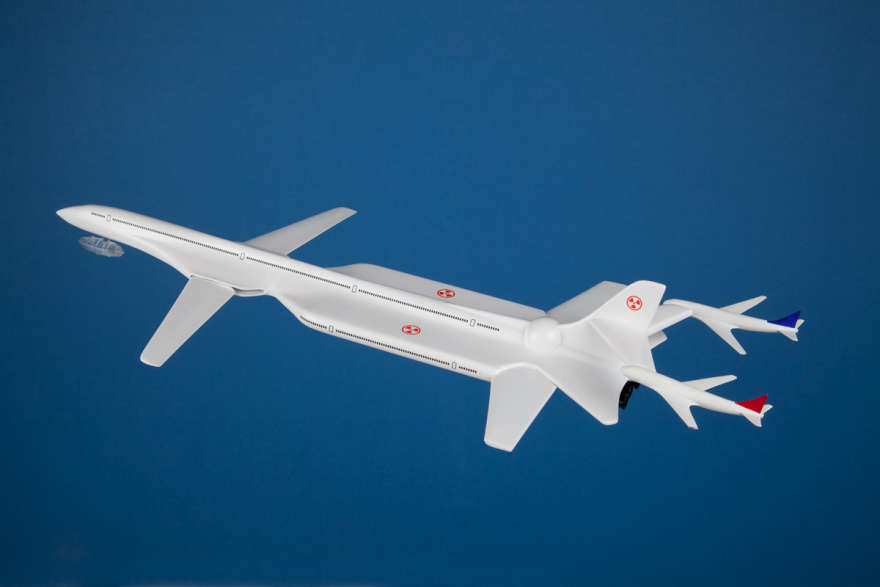 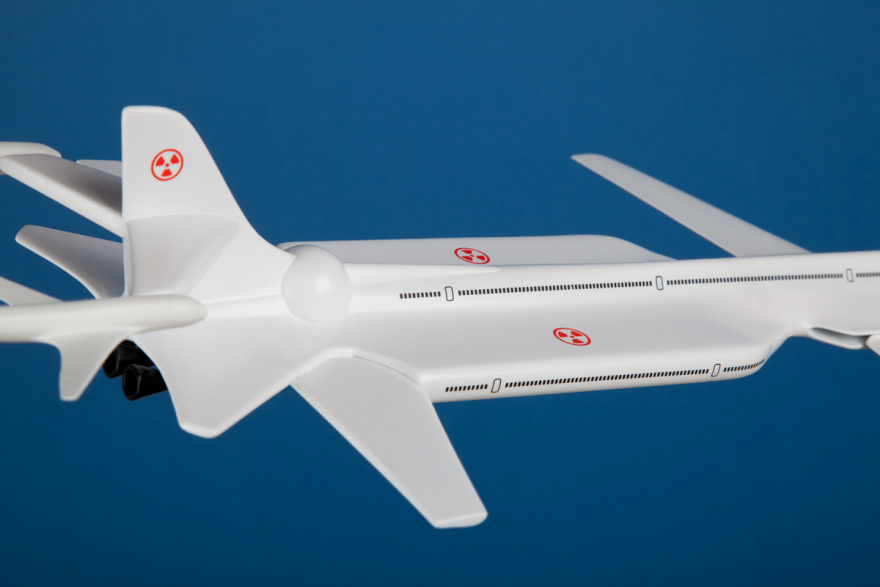 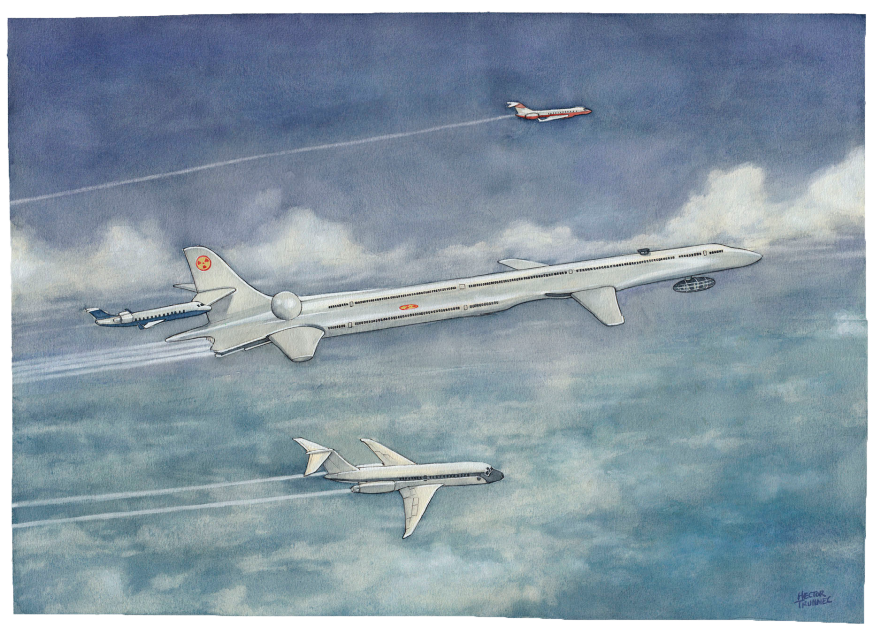 I am a Designer of Technologies. I investigate new trajectories for technological progress through narrative-led proposals and scenario building. My work utilizes design fiction to instill inquiry in how the forces behind major technological advancement may take shape to facilitate discussions over the pros and cons of living with proposed futures and alternative realities. I do this by creating scale model prototypes that bring the my proposals into the real world.

My work on High-Speed Horizons started with a brief to reimagine an alternative history of energy (1900 onward) if DC power was never widely adopted. In my research I came across a list that included sonic booms as an energy source and thought what a fantastic platform to reimagine how things could have evolved differently. To have this energy source generally seen as an undesirable effect (the sonic boom) and utilize it in a way that addresses its potential as possibly a greener alternative to petroleum was the premise for my initial iteration. I wanted to see the sonic boom as an enabling technology instead as it being seen as a limitation on innovation which is how it has historically been seen. I also set out to address how innovation and technology is selectively funded and developed depending on how it fits into political, economic and social agendas.

After the initial month long brief I revisited the project and expanded it to look more closely at how aviation has historically been a platform for grand scale what if scenarios and visions of speculative futures. I found a rich history of experimentation with radical ideas for aircraft designs and alternative energy propulsion including hydrogen, coal, algae and of course nuclear power. The history of the aviation is so interconnected to the development of the modern world that it is impossible to imagine our world remotely resembling what it is today without the aircraft. This makes speculative aircraft design an ideal platform to offer up alternatives to today's complicated relationship with innovation and energy.

I became very interested in the complexities, politics, economics and top secret developments surrounding the nuclear power aircraft. It was said in the 1950s that nuclear power could provide limitless energy in an aircraft and I began to think about who today would be the ones that could truly use that feature and for what purpose. An idea such as an always airborne aircraft reminded me of the grand visions coming from the tech sector and how these large technology companies are increasingly being scrutinized by governments to keep their influence and innovation in check. So I designed an aircraft to address this problem­ and named it Air Laissez-faire.

Breaking the sound barrier in 1947 by Chuck Yeager and the X-1 aircraft ushered in a new age of supersonic flight that we still to this day dream of fully embracing. The SST generation of the Concorde failed due to the high operating cost directly linked to the politics and conflicts determining the cost of oil. If we are to make a more permanent return to a 'supersonic age' we need a more sustainable energy source to oil and at this point there is none capable of doing so. But what if the answer was there all along when we broke the sound barrier. This release of pressure energy as an aircraft travels faster than the speed of sound causes a powerful shock wave of energy to propagate out over the landscape as auditory and vibrational disturbance known as a sonic boom. As a sonic boom is indeed a source of energy why do we not see this as an opportunity instead of an obstruction. An aircraft traveling above Mach 1 makes a sonic boom and a sonic boom is a source of energy so in theory it would make the most efficient and sustainable energy source imaginable satisfying our dream of truly green aviation. Working off this I designed several aircraft to imagine what it would have been like if we tried to fund research into using sonic booms as a propulsion source from the breaking of the sound barrier to today. Those aircraft came to be the X1-SB, B-29 Duo and Boomjet.

Research for the project brought me to many places including the physical archives of the British Library and Imperial War Museum along with countless hours of online research. I met family members of people who worked on the top secret Tennessee U.S. military nuclear aircraft base and countless aviation enthusiasts during the project. I conferred with an Aerospace Engineer from Lockheed Martin throughout the project over the possibility of producing energy from a sonic boom and how it could be integrated into an aircraft's design. Theoretically such an idea is indeed possible. This led to very fantastical and insightful brainstorms about the potential of utilizing sonic booms as a propulsion source as well as how to land a plane onto a moving plane.

There are 4 scale model aircraft with accompanying renderings and a dedicated project website at www.highspeedhorizons.org.

The scale model aircraft were made using several methods including 3D printing, laser cutting and traditional mold making methods. The plane designs were heavily influenced from historical radical aircraft designs. The mockups for them were first done on paper, then sketched in 2D on the computer before being remade with 3D modeling software prior to 3D printing. After printing the models were sanded and finished with automotive grade materials including 2 pack auto paints and high quality dry and wet transfers. B-29 Duo was made more traditionally by making a mold from an out of circulation 1:72 scale B-29 Airfix model and adding elements to make the twin fuselage design.

Aviation and visions of flight have a very well established aesthetic and delivery. I wanted to acknowledge and embrace this history through the project. Even if an aircraft couldn't fly it could still exist as a model. Historically many concepts didn't get past the model but it did give an accurate representation of what could be. Artists often painted aircraft in dramatic scenes to help sell the concept from taking off into the sunset to inflight firefights. I wanted to do the same for my project so I collaborated with fine artists to bring my aircraft to life through oil painting, watercolors and pencil drawings that capture my aircraft in speculative scenarios that would support how they would be used.

Air Laissez-faire is a self-piloting always airborne nuclear-powered free enterprise aircraft. It makes the furthering of innovation outside the jurisdiction of governance and sovereign airspace possible by enabling forward-thinking entrepreneurs and others with innovative ideas to pursue their visions without the hindrance caused by legislation, taxation and other external oversight. Air Laissez-faire is 158 meters long and provides workspace, accommodation, an air-based airport terminal, as well as other amenities such as a promenade spanning the length of the aircraft and a 360 degree glass enclosed multipurpose space hanging down from the aircraft's nose.

The aircraft is self-piloting to ensure safe operation and to eliminate pilot misuse or error during flight. It constantly circles the globe avoiding sovereign airspaces powered by its on-board nuclear power plant which provides virtually limitless amounts of power to keep it flying and those on board innovating. Air Laissez-fare exists is a 1:400 scale model.

The X-1SB is designed to be a variant of the X-1, the plane that originally broke the sound barrier and sit alongside other early aircraft in the American X-Plane program. There were many X-1 variants testing different aspects of supersonic flight so my aircraft that tries to optimize the aircraft's shape to create and potentially capture its own sonic boom by having its body shaped like a shockwave cone.

Due to the X-1SB's unorthodox shape it would need to be airdropped by a carrier aircraft so the B-29 Duo was created. The B-29 "Double Mama" mothership, based off the B-29, has two fuselages similar to today's Virgin Galactic carrier aircraft. It holds the X-1SB between the fuselages prior to it being dropped to conduct its research. The models for these aircraft are at 1:72 scale.

Boomjet is a sonic boom-powered passenger aircraft. It sustains its flight by driving 47 propellers from the pressure energy released by the aircraft as it travels faster than the speed of sound. The sonic boom transport vehicle (SBT) uses traditional petroleum for its vertical takeoff and landing (VTOL) before switching to sonic boom power as it surpasses Mach 1. Boomjet's vertical launch mimics the methods commonly used by helicopters, quadcopters and space shuttles during takeoff. Its design is inspired by modern day commercial aircraft and the vapor cone created when an aircraft passes the sound barrier. Boomjet exists as a 1:144 scale model.

This project demonstrated good use of the counterfactual, and had nice visual communication.