In 2015, the Magna Carta celebrated its 800th anniversary. This iconic document brought together two dueling sides and transformed into the foundation of liberty that we know today. To mark this momentous anniversary, Seasons Playing Cards designed a limited edition collector's card set to both educate and inspire.

Over the past few years growing reverence to "mint condition" packaging in the collector's market and the resulting aversion to opening them has inversed the market dynamic between packaging and product with a strongly redefined function of 'PLAY' to 'DISPLAY'. This transition in customer behavior has blended the line of packaging into product, slowly inversing attention inside out. Using this knowledge, the goal for this launch was to stay relevant with the changing market by creating packaging that was as enjoyable and interactive as the product itself.

The solution was an interactive package design system that allowed multiple display options for collectors, and through marketing insight, gave the brand an opportunity to create an innovative market-first design that stood out in the competitive niche. 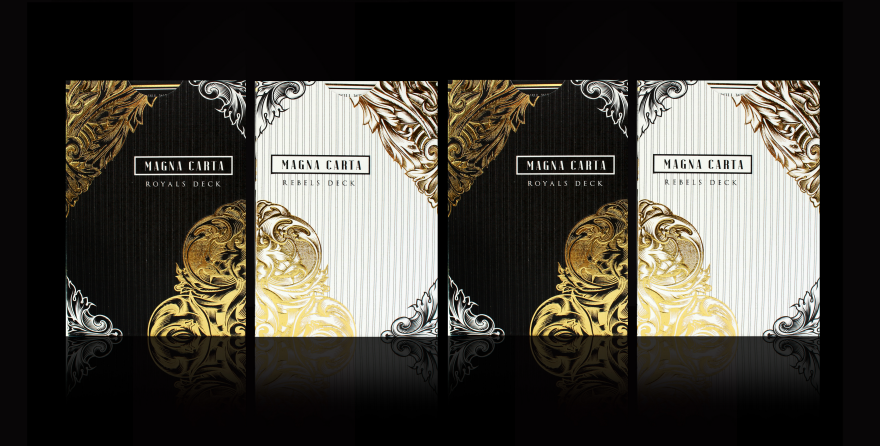 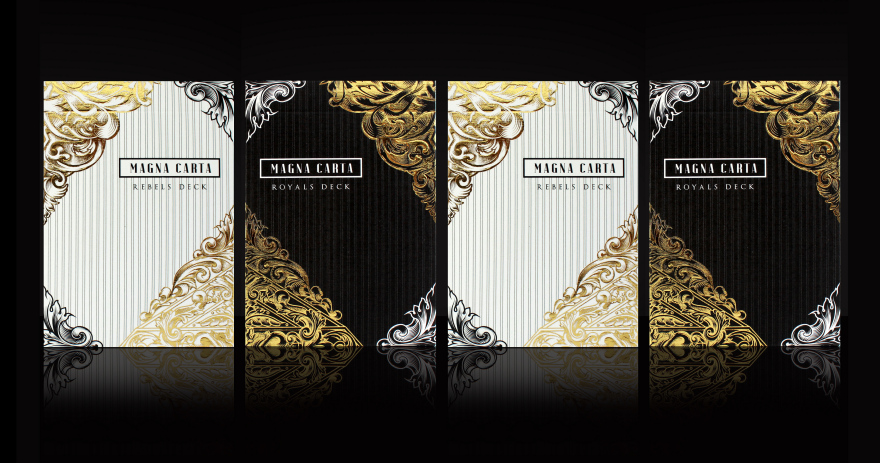 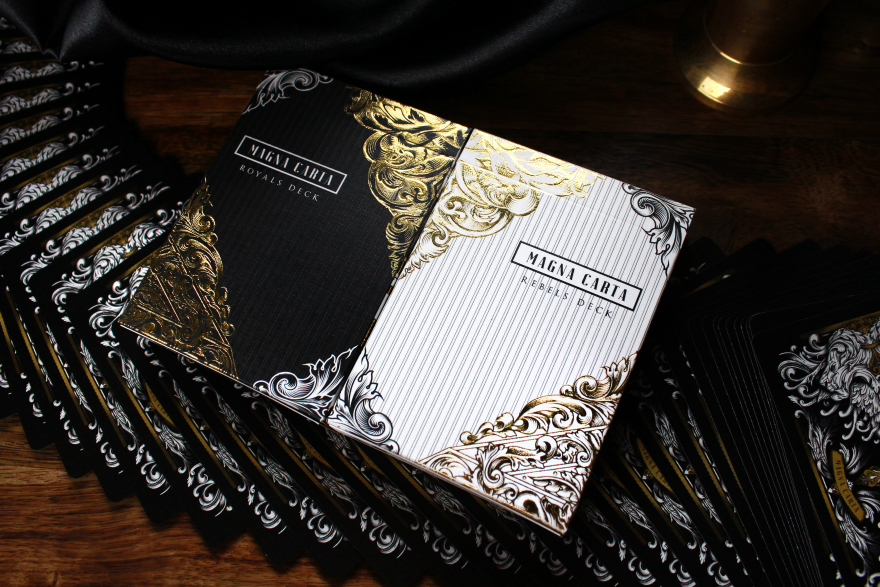 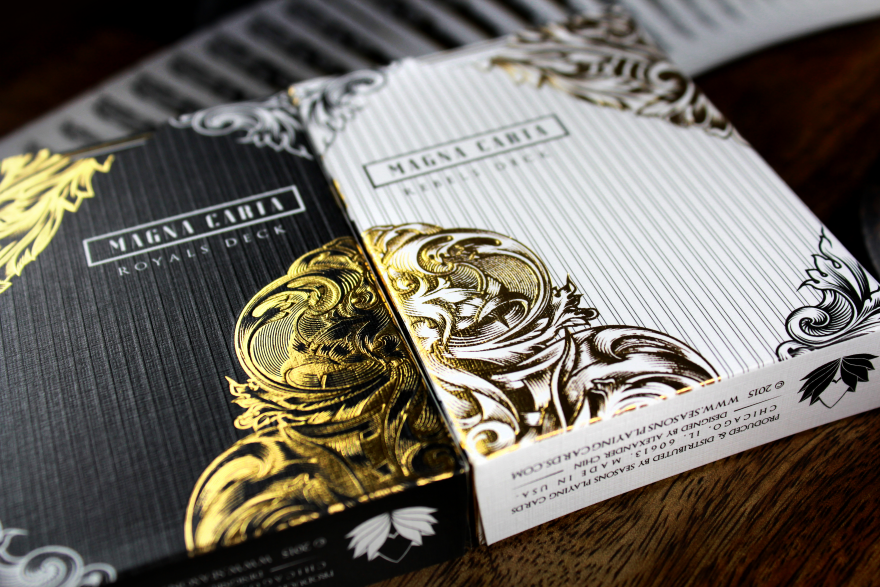 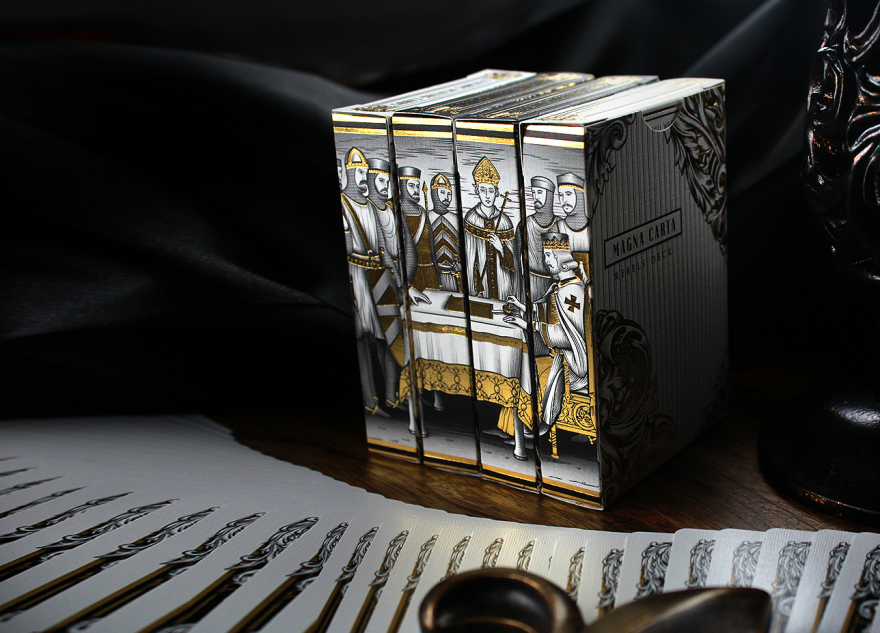 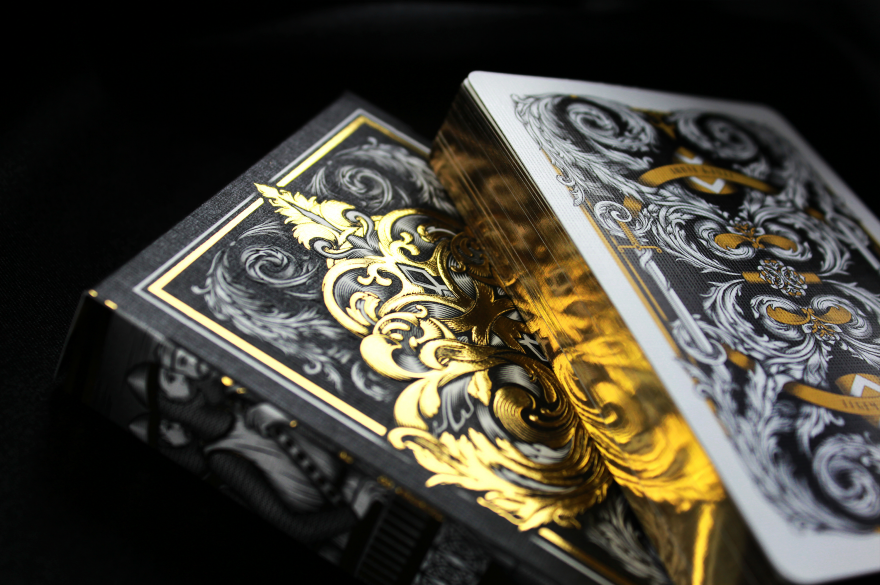 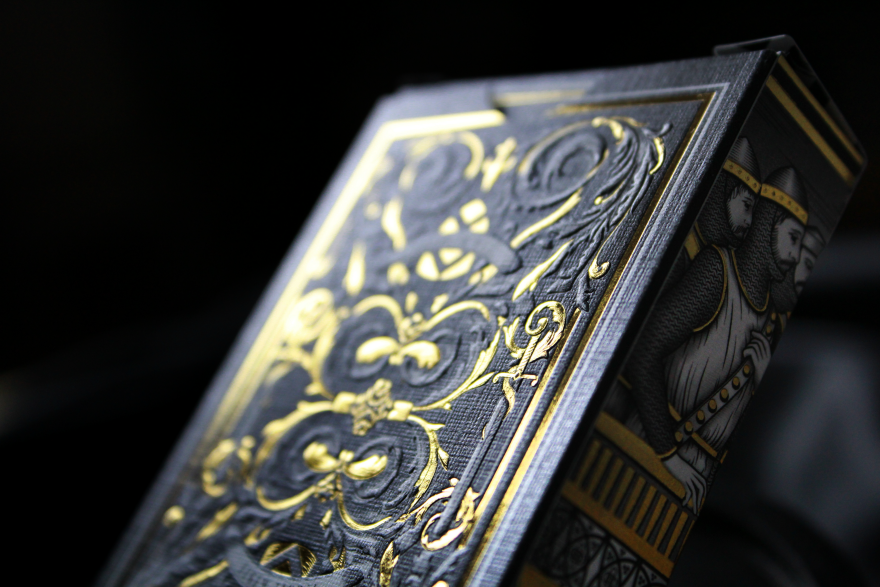 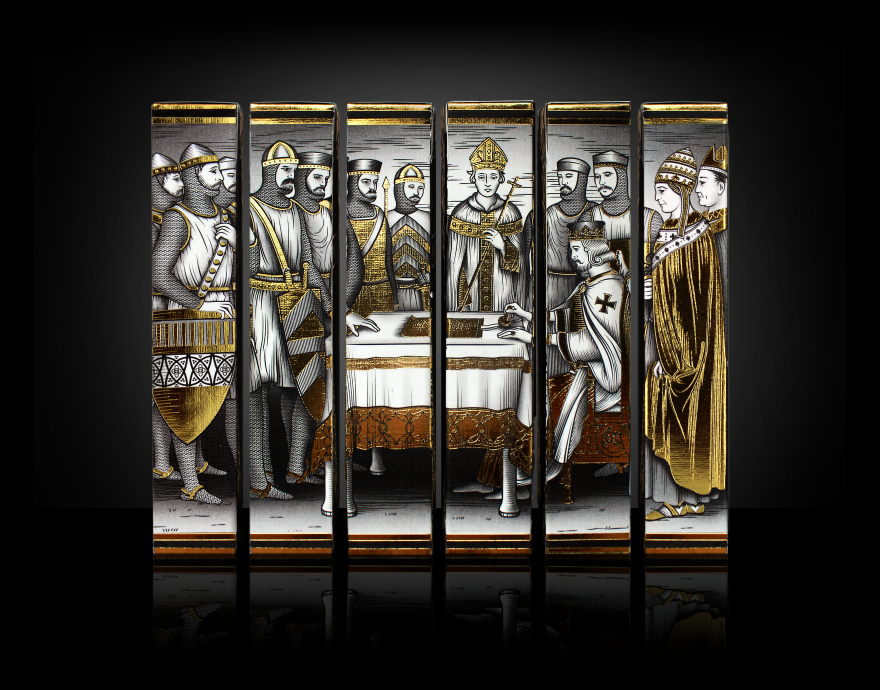 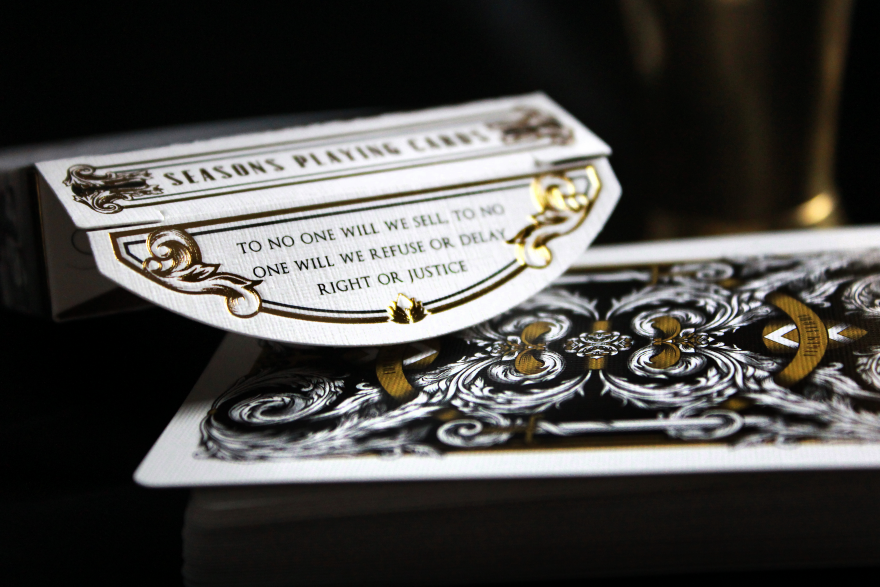 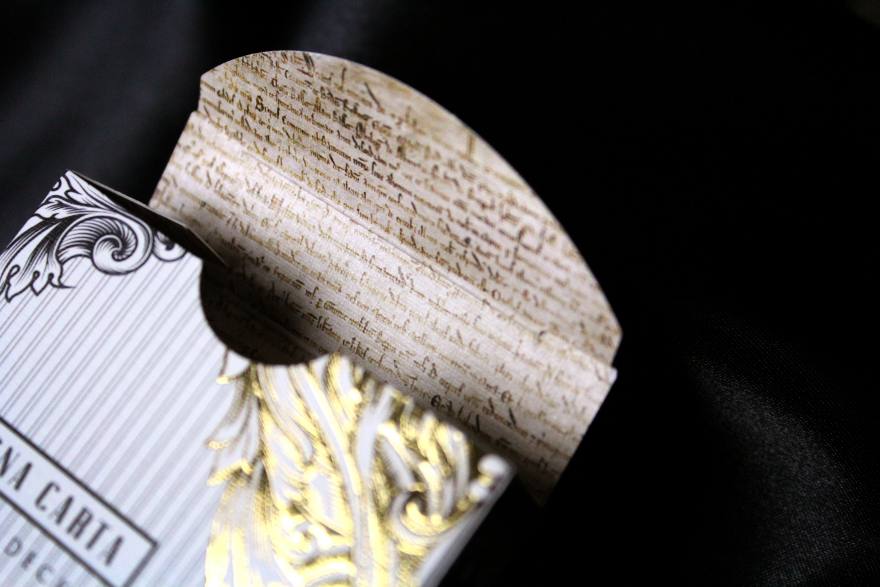 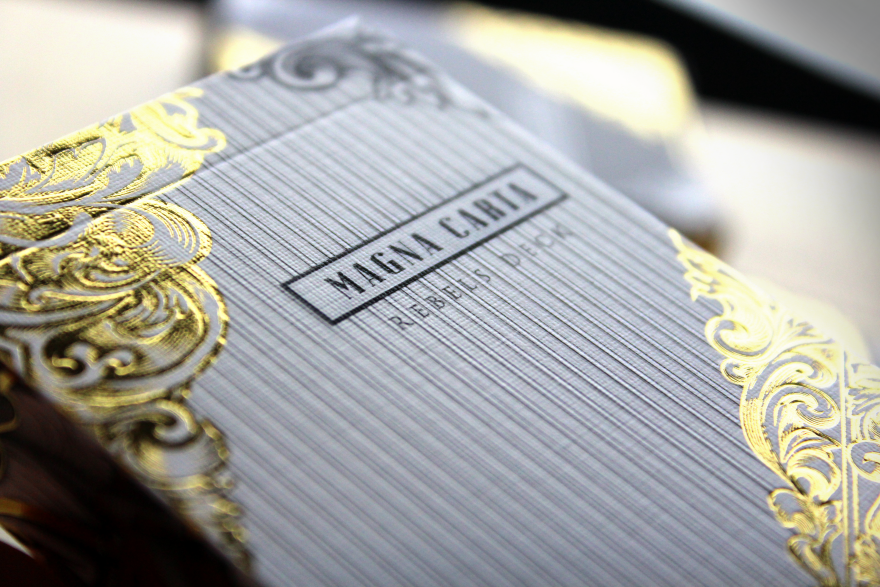 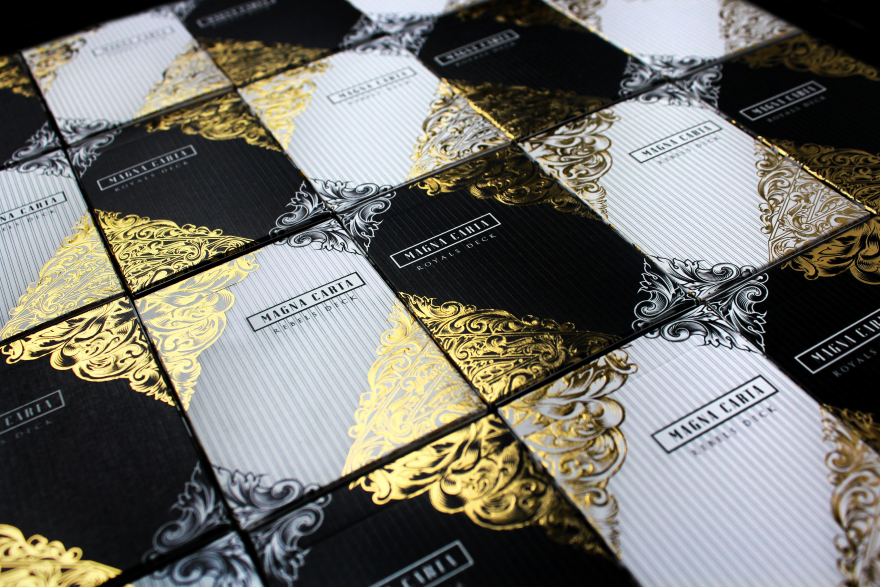 The foundational question that directed the project was "How do you create a product that can be enjoyed without opening?" Because the product would never be opened, the resulting constraint transformed the packaging into a product itself. Through this new perspective, the approach towards package design weighed heavily on the idea of interaction and building a design system around this directive.

Anchored around the story of the Magna Carta, the design system was positioned around creating juxtaposing elements using a black "Royals side" and a white "Rebels side". The packaging focused on crafting intricate moments around this unique tension between separation and interaction of the pieces in the series.

In collector markets, battle for shelf space is not found at the store, but post-purchase in their homes. The most common function of collectible playing cards is to be displayed like trophies on a collector's shelf, lined in rows like a proud hunter. These are the shelves that get photographed and shared. Recognizing this, the first level of interaction encourages the collector to pair their deck with a partner product to create a foiled illustration for display. The design allows them to pick between 4 different display suits for their personalization which allows the user to maintain personality with the products.

The tuck cases maintain the elegance of the Seasons brand with the raw illustration styles of the Medieval era. Subtle embossing enhances the impact of the foiled interactions while mimicking the pleated linen textures of the uniforms knights would wear under their armor.

Second level interaction focused on repurposing the underutilized area of the side. Research on user habits revealed that when their display shelves reached capacity, decks would be rearranged for space from front-facing to side-facing like a bookshelf. This insight provided an opportunity to stand out on the collector's shelf by becoming the first company in the market to create a secondary level of focus of a deck through these underutilized sides.

Previously reserved for factory text, these sides now display a gorgeous reinterpretation of the iconic Magna Carta mural when fully assembled. By maintaining the most impressive spot on the collector's shelf through display-worthy packaging, the brand wins the honor of permanent real-estate in the collectors home, building brand reputation and customer retention over time.

For brand ambassadors of Seasons Playing Cards, an exclusive King John expansion deck was created unavailable to the public. Representing a cheeky nod to the origin of the Magna Carta, the deck represents the motivations of the Magna Carta, featuring the Rebel's gold and silver within King John's holding box; a symbolic metaphor for the taxation crisis. These special hand gilded decks were limited to 800 representing the 800th anniversary.

The packaging of the King John deck was specifically designed to have an impressive standalone face and back, featuring a fully assembled Ace of Spades (in comparison to the quarter suits of the other decks). This design choice to break from the visual system was based on observations in a type of collector who only sought "white whales" (a term for rare decks). This meant that it would be isolated from the context that it was introduced when displayed. This realization helped create a single design that would have value out of context.

Each deck reveals a slice of the iconic moment on the side with Royals and Rebels portraits on opposing ends of the package, continuing with the idea of "choosing a side" when displaying. Will a user support the Royals, or will he stay resilient with the Rebels?

The mural's visual system was created so that multiple display options are possible based on the various purchase options available. Two Royal decks create the Magna Carta document, while one of each will display a full side of the table that they can flip to reveal the other side. Two Royals and two Rebels decks make the center of the mural and feel complete for those who only have public access. The King John decks however are able to expand the mural to create the world's first hexapytch deck series, giving the strongest supporters of the brand something special to differentiate themselves.

For those brave enough to open the package, the story of the Magna Carta continues. First greeted by the reigning mantra of the document, the user then opens up to reveal the 1215 Magna Carta document preserved on the interior of the box for them to hold.

Both back designs symbolize their respective factions. The white Rebels design represents the many different regions the Barons came from to fight against the King. The black Royals design was created with the King's crest in mind featuring the 3 lions of the Angevin Empire. This was interpreted by illustrating a subtly hidden 3 headed lion. A ribbon ties the two back designs together to create a circle, representing the shape of the King's seal. It reads "Magna Carta: Legem Terrae" translated to "The Law of the Land".

Suit designs were also illustrated with symbolism towards their respective families they represented. The club hides the lions face for the Angevin Empire. The heart features a sword skewering the fleur-de-lis. The diamond proudly displays the crest symbol of the leader of the baronial opposition. The spade hides a cross in its center represented on the King's cape seen in the mural.

By creating a package design system centralized around interaction, the Seasons brand was able to cater to changing user needs and create an innovation that helped stand out in the competitive niche. It has redefined the way the market has looked at collector's relationship with packaging and is already a packaging trend seen in market for upcoming 2016 deck releases of others.

The details on the murals illustrations is really fascinating, any antique collectors would display this collector’s item together with his/ her collections.