Lux Blox LLC launched its construction toy, Lux the principled block, in October, 2015. It is now selling in nearly 200 specialty toy stores in the US and Canada. Lux is a construction block that is designed to give users of nearly all ages access to design principles found in nature. This was accomplished by creating a singular square shaped block with a hermaphroditic pinless hinge connector that allows for a 240 degree bending motion along each edge. The hinged edges of the Lux blocks enable them to be connected into sheets that behave like a fabric which can bend and fold. This enables the user to generate structure through corrugation. The experience of building with Lux is therefore more akin to the fabrication of an architect or an engineer than that of a brick layer.

Lux blocks also work as elements in a minimum inventory /maximum diversity system, which means they can generate complex and highly ordered systems through free play. For instance, three Lux blocks when snapped together make a chain that when snapped in on itself makes a triangular prism. This prism in turn becomes a new module that when connected to other prisms makes familiar items like the Platonic and Archimedean polyhedra. This opens the door to atomic and molecular structure and the structure of microbial organisms.

The creators of Lux were inspired to create this toy after learning of the testimony of people like Richard Buckminster Fuller and Frank Lloyd Wright who claimed that playing with the specially designed manipulatives in their Froebel Kindergarten classes were some of their most formative educational experiences. Frederick Froebel, the inventor of Kindergarten, had created these manipulatives, which he called "the gifts" ,in the early nineteenth century. He designed these gifts to demonstrate and expose children to his scientific understandings of the crystal structures of minerals and the other motions and forms found in nature.

Lux were designed to be the block for the 21st century, and its designers put into the blocks the 20th century principles of fractal geometry, non-Euclidian geometries used by Albert Einstein to express his theories, and the structural principles of designers like R. Buckminster Fuller and Peter Jon Pearce. The point of Lux is to give people access to nature's design principles in a fun play experience that will encourage creativity and exposure to the patterns and forms found in nature. 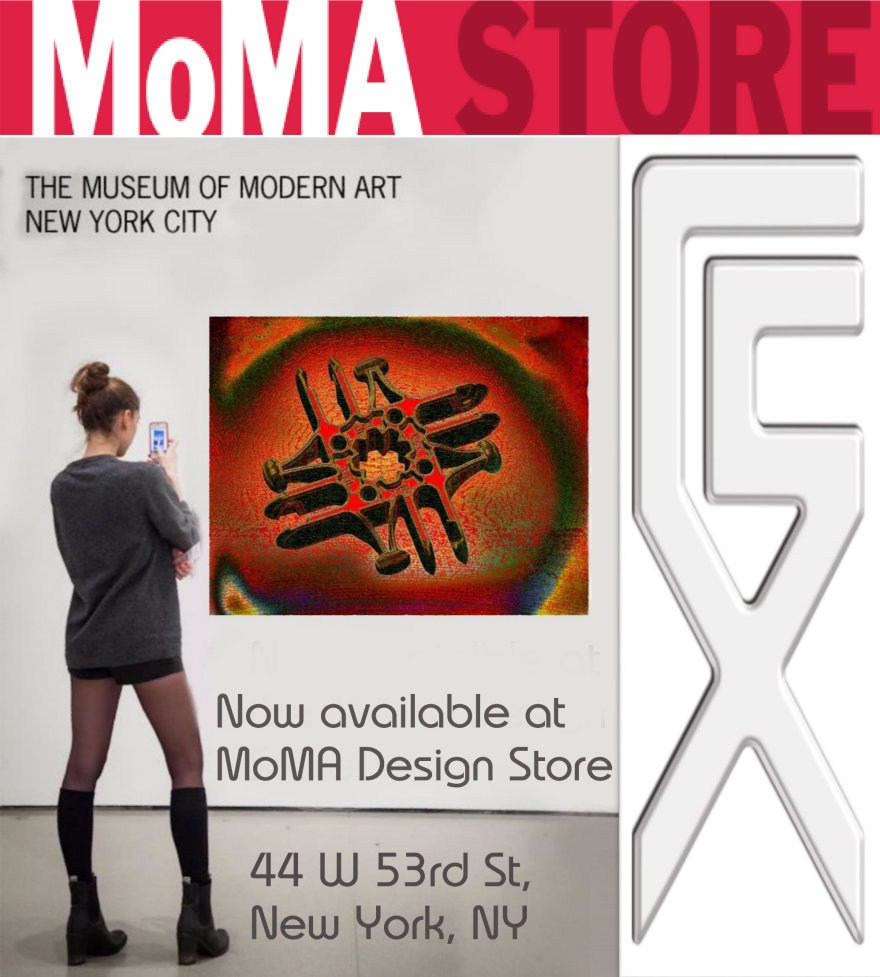 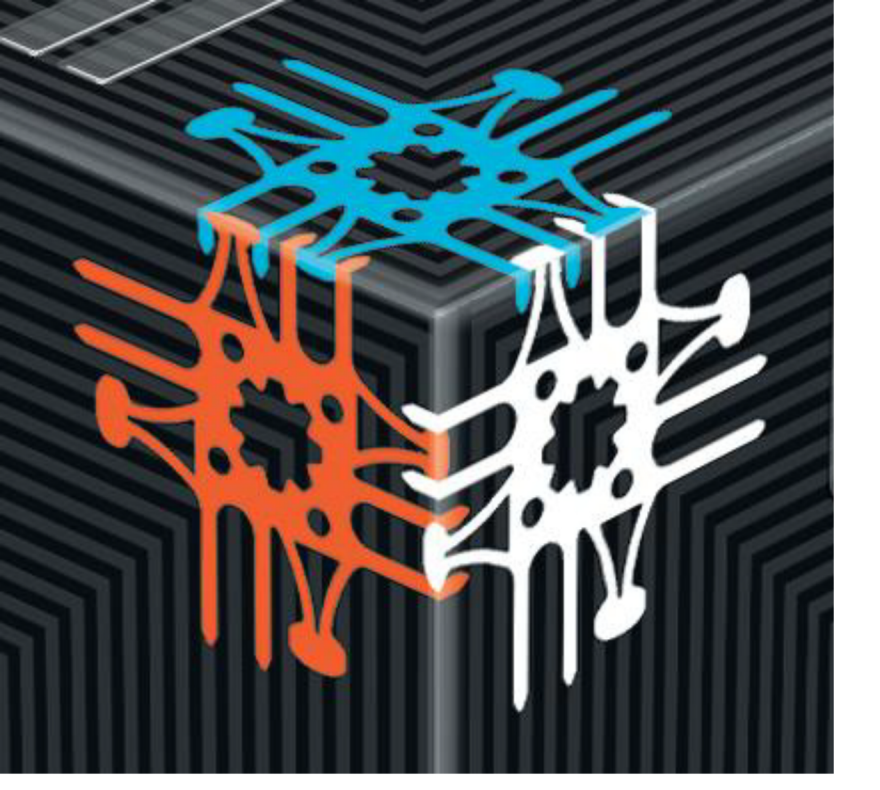 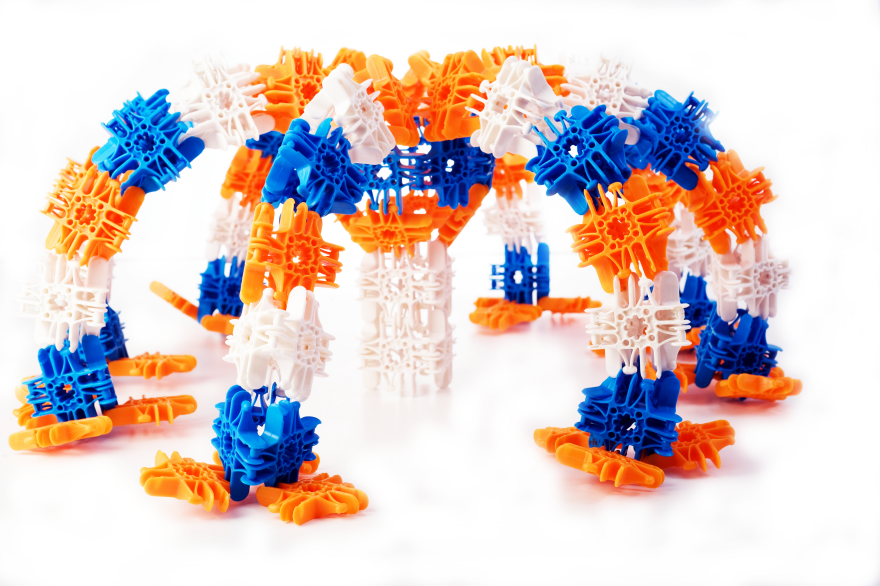 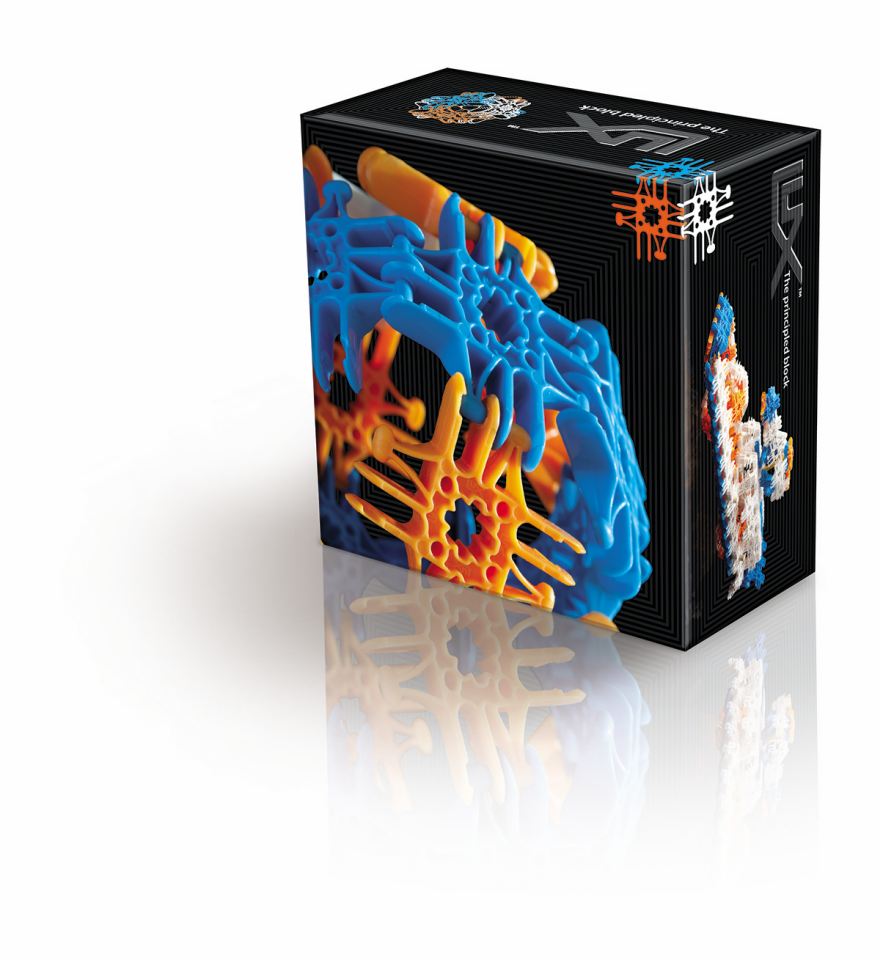 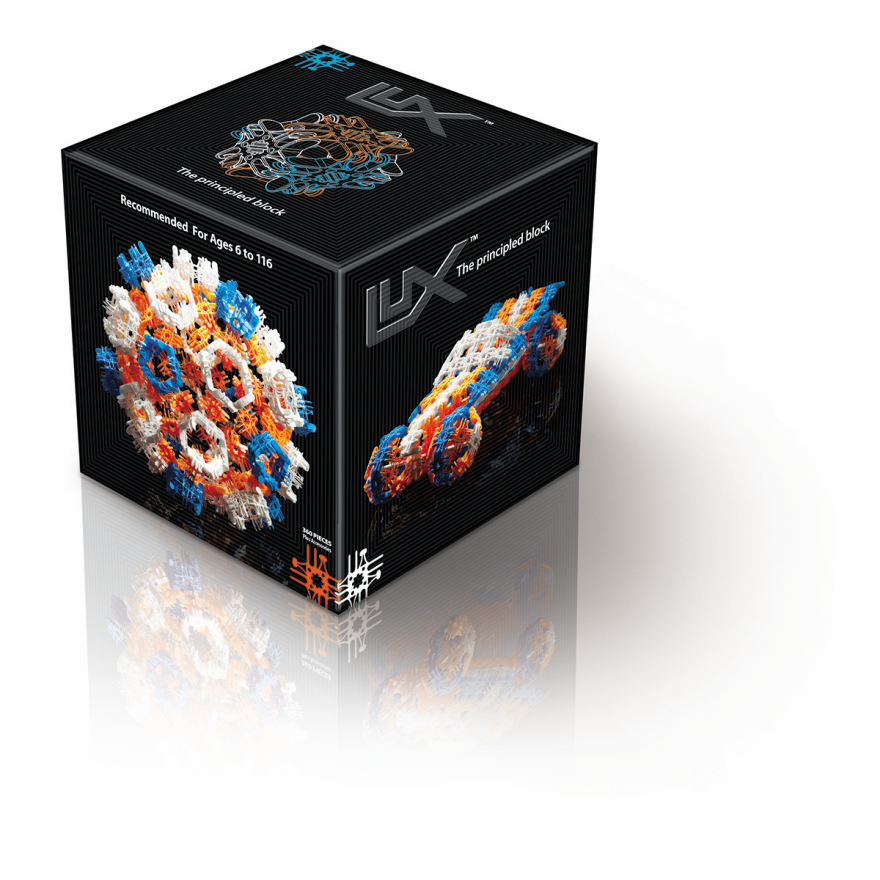 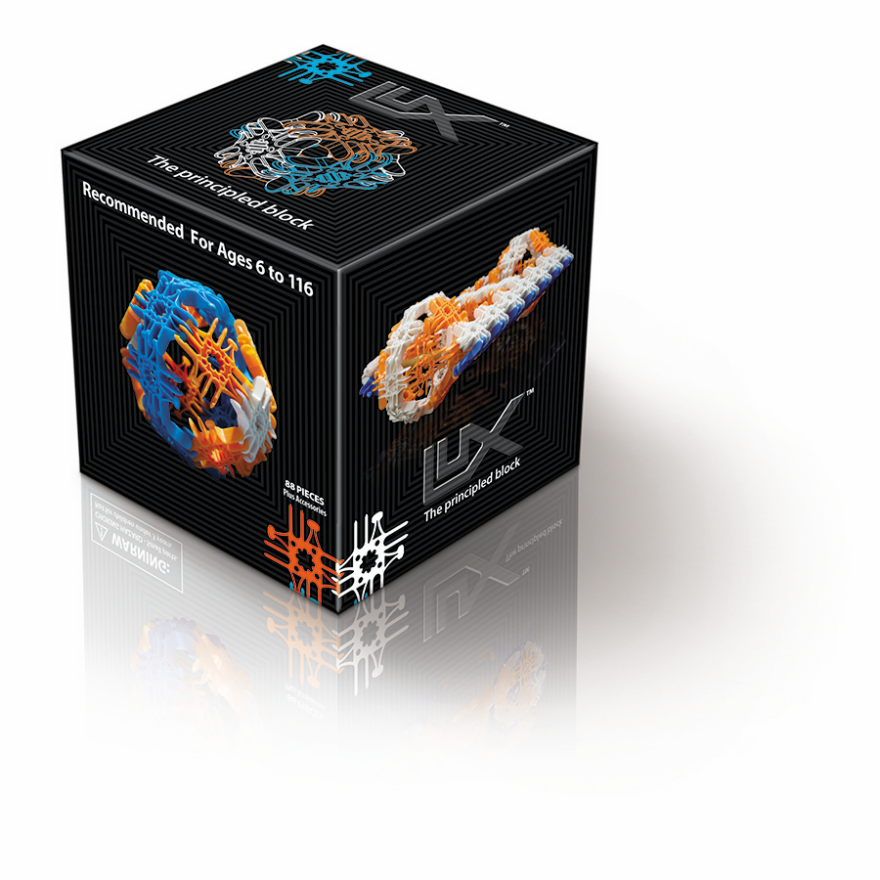 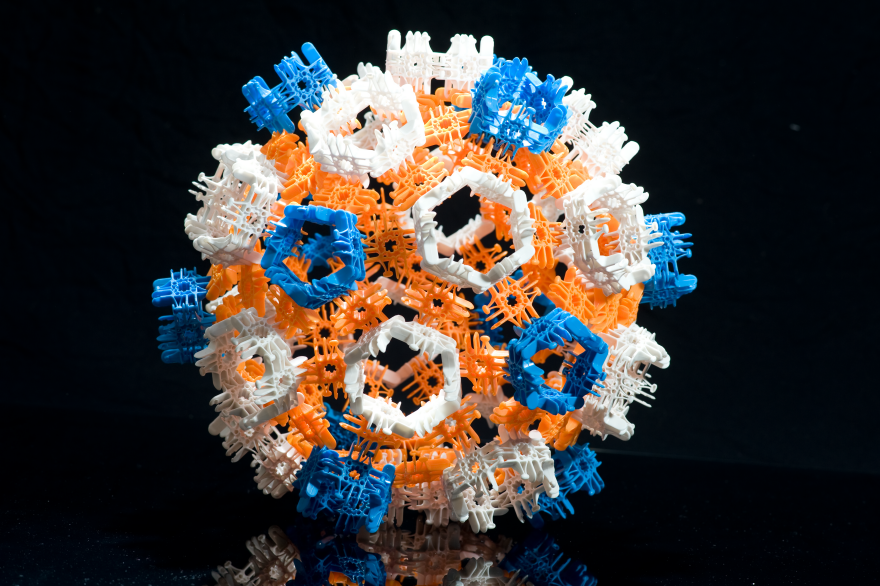 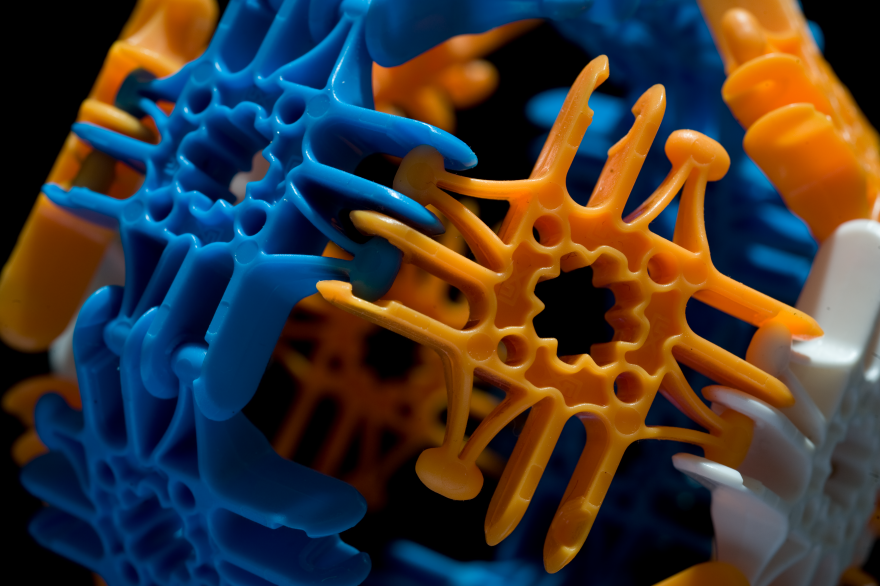 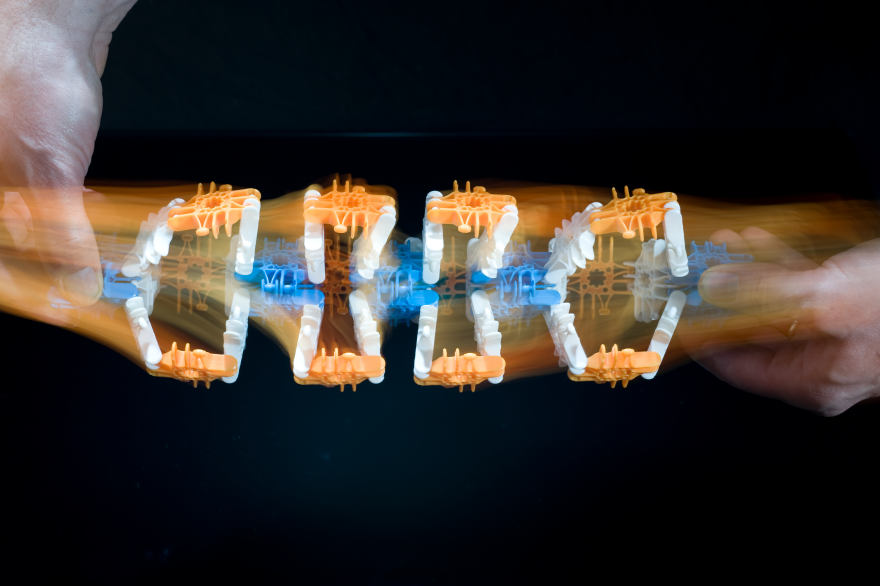 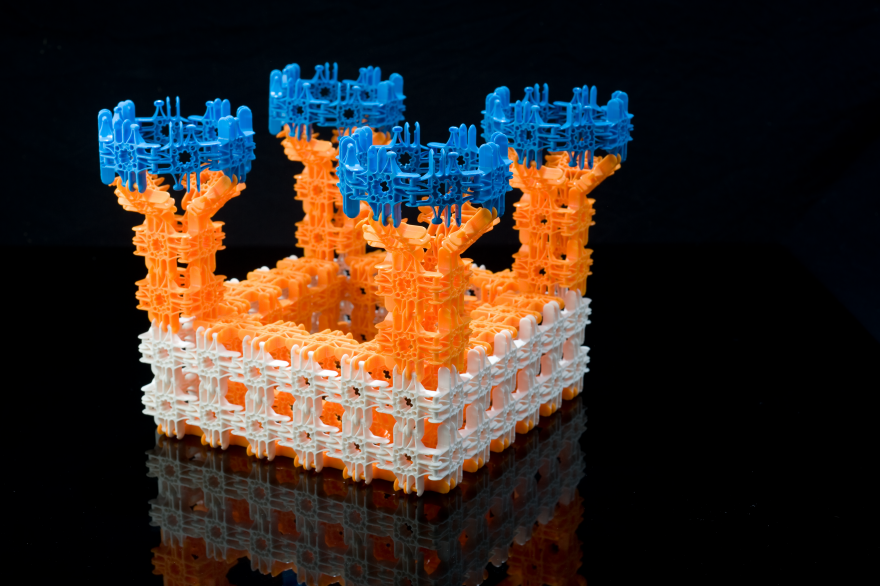 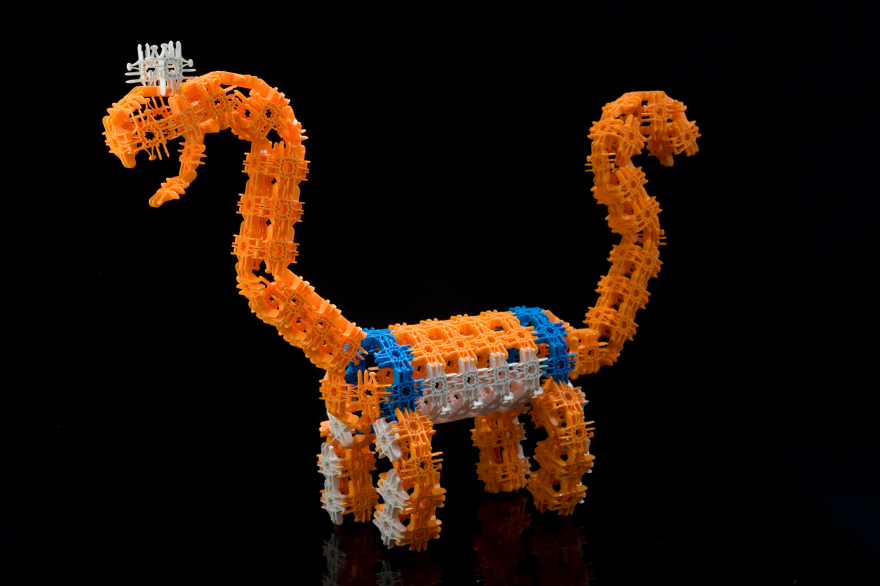 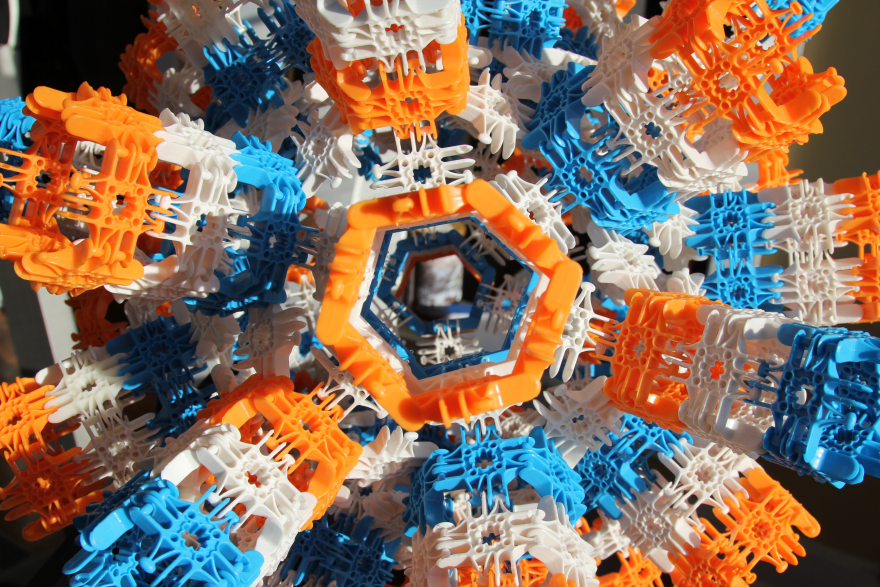 Husband and wife team Mike and Heather Acerra put their passion for architecture, science, learning theory, and creative play into what they call a “new block for a new century”. Lux the principled block ™ hit stores last October and is now in nearly two hundred brick and mortar specialty toy retailers and museum stores in the US and Canada.

Unlike much of the competition which depends upon licensed movie, TV show, or comic book-themed model building projects, the people at Lux have gone “old school”, amking a construction system designed for generating the excitement that comes with free-play exploration and improvisational construction. Further bucking convention, this “open-ended toy”, comes with no printed instructions. When you open the glossy black box there is a statement on the inside of the lid that simply reads, “Are you looking for instructions? Go to www.luxblox.com”. On the website there are dozens of videos featuring young people demonstrating how to build a wide range of projects, including conventional items like helicopters and submarines, as well as more complex structures which utilize the block’s dynamic properties.

Heather and Mike Acerra went to unusual lengths taking nearly a quarter of a century of thought and four years of prototype development before committing to this particular design. Both are great fans of architect Frank Lloyd Wright, the inventor R. Buckminster Fuller, and the famed pedagogue Frederick Froebel (the inventor of kindergarten). Wright and Fuller credited playing with Froebel’s “Gifts”, which were specially designed learning manipulatives based on patterns and structures found in nature, as contributing greatly to their understanding of structure and design. Heather and Mike wanted to create a 21st century version of the 19th century Froebel Gift so kids can have access to the universe we learned about in the time since Froebel. So their first task was to ask some very big questions, like “how does nature put itself together?”

They examined fractal geometry, the systems theory of Bucky Fuller, microscopic sea life, and theories of natural structure and construction strategies like those explored by Peter Jon Pearce. They looked to naturalists like D'Arcy Wentworth Thompson, who posited that Life= Structure as a function of time, and the famed 19th illustrator Ernst Haeckel, who first catalogued the microscopic sea creatures called radiolarians.

When developing the block they gave themselves strict guidelines for what it would have to do. First, it had to have a very limited uncomplicated inventory of parts. Second, it should be easy enough for a young child to use. Third, it should allow the user to build as nature builds itself. This would mean breaking through the constraints of the planar geometry defined 2500 years ago by the Greek geometer Euclid, (In which brick laying does very well) and instead give the user access to the spherical and hyperbolic geometry of life that was used to aide Einstein in his theories of understanding our universe.

With the help of Daniel Wollin, then a fifteen year old, who was adept at AutoCAD (computer aided drafting), the process of innovating the block took over three and a half years and over 4000 working hours on a Makerbot 2X 3D printer. The 3D printed prototypes were played with and heavily scrutinized in focus groups of boys and girls of all ages. Input from these sessions was used to improve and refine the block design. The ultimate design utilizes a patent-pending snapping pinless hinge to create a dynamism not found in most building blocks.

Lux is called “The Principled Block” because , according to its creators, it harnesses the power of nature’s design principles. One such principle, first coined by the architect Peter Jon Pearce, is that of “minimum inventory/maximum diversity”. This means that unlike most construction systems that have a variety pf parts but mostly construct a limited “boxy”, or rectilinear geometry, Lux has a minimum inventory of shape parts (only one) but possesses a maximum diversity of potential design and structural outcomes. This is because Lux blocks can create spherical and hyperbolic surfaces in addition to the more conventional Euclidian surfaces. Normally when we think of squares we are reminded that, according to our Euclid, the rule should be that four squares can be grouped around one central point. With Lux you can group from three to ten squares around each other- which opens the doors to “Non-Euclidean geometries”. And this is important if you want to build all of the exotic items found in this universe.

Another principle that Lux utilizes is that of “tensegrity”. Tensegrity or “tensile integrity” is a term first coined by Richard Buckminster Fuller, the inventor of the geodesic dome. Tensegrity is the principle behind the strength of folding materials. Corrugated metal and cardboard or the paper in origami all demonstrate the power of materials exploiting the tensile strength of their materials- which is much stronger than the compressive strength of the same materials. Lux achieves strength and structure from the bending and curving of its blocks and the unique tension hinges on its connectors. In this way Lux also shares something in common with nature because atoms and molecules, living creatures, and the gravity “pull” between the heavily bodies, rely mostly on tension.

The most fascinating principle that is demonstrated by Lux is that of bio-mimicry through algorithmic self –organization. Lux is a three dimensional fractal rule-generator. When Lux are put together they naturally lead the builder into patterns and designs that tend to repeat and expand outward into more complex and beautiful structures that literally imitate the forms found in nature, from atoms and molecules to the structures found in living things. Lux demonstrates through ordinary use a tendency to lead the user because it generates rules based on desired outcomes. Lux demonstrates an organizing principle that leads users into discovering the design strategies of nature. This, according to its creators, makes Lux a profoundly philosophical and stimulating artifact that they are very excited to put into the hands of children.

Lux’s other big distinction from a crowded market place of construction toys is its uncanny ability to move in exotic ways. Lux can easily create complex sarrus linkages, gimbals, governors, and mechanisms that mimic living things. This motion and its other qualities has led to a growing number of toy store owners and parents who view Lux as a viable alternative to Lego.

Lux has been proving itself to be a welcome addition in the classroom as well. Teachers find they can keep kids interested in diverse subject matter because of its multi-disciplinary applications. Art, science, and math teachers enjoy Lux in their classroom because they can easily broach the subject of complex forms, mechanical principles, and make arithmetic fun. Lux has proven to be an excellent tool for increasing children’s spatial intelligence as well. And with the departure of shop classes from the nation’s school, Lux fills the void by allowing kids the opportunity build complex items with their hands.

Because of its versatility and ease of transitioning between structure and machine Lux has especially been embraced in the STEM and Maker movements in schools and after-school programs. (“STEM” is an acronym for Science, Technology, Engineering and Math education. Focus on these areas together is not only vital because the skills and knowledge in each discipline are essential for student success, but also because these fields are deeply intertwined in the real world and in how students learn most effectively).

Mike and Heather Acerra are sympathetic to the Maker movement so much so that they designed their block to readily accept in its central star-shaped orifice standard inexpensive items like wooden pencils and Popsicle sticks. There are also four smaller holes in the block to accept standard wire used in robotics.

Lux has also been extremely well received in the autism community and was featured in the November, 2015 issue of The Autism File magazine. Children who have never played with toys have astonished parents with their embrace of the principled block.

Lux are manufactured in Galesburg, Illinois with the help of Bridgeway, a non-profit that trains the handicapped. The Acerra’s are committed to making their product in the US and to selling primarily to brick and mortar specialty stores.

We loved the potential of outcomes referencing systems in nature and how this might inform a very different and exciting new way of looking at the world.

The panel also wanted to recognize how hard it is to create such a complex system that works. No small feat.