Current generations of kids are born into an increasingly digitized world. With electric power always at their disposal, they do not learn where the energy they are using, originates from and how it is created.

Acknowledging this increasing use of technology and lack of understanding, parents feel the need to teach their kids about energy and it's consumption in a more tangible, explorative way.

Joul was created out of the belief that we have to bring the focus back on the energy's origins and give kids the possibility to self-explore this field.

Joul is a set of modules for young kids to playfully explore the concept of energy in a tangible and interactive way. It divides the energy cycle into three stages: generation, storage and usage, while each stage is embodied by a different type of module. The generator blocks help to understand where energy comes from and how much effort it takes to create different types of power – be it through sun, wind, kinetic energy, water and much more. The storage blocks make it possible to save and transport energy, while the output blocks establish the connection to the power we use in our everyday lives through interactions such as light, sound and vibration.

Each generator block provides motion and sound as a feedback when generating and charging the battery blocks. Kids turn the handle for kinetic energy, blow the wind blade for wind energy and open up the solar panel for solar energy. While charging, different sounds resemble different types of energy, with differences in rhythm and amplitude representing how actively the kid is charging the blocks. The amount of charged energy is visually represented with three small LED lights on the battery blocks, allowing kids to visually understand the amount of energy they generated.

A mobile application provides additional information about the amount of energy produced and educates about the energy source. This way Joul can grow with the child and parents can review the outcomes together with their child.

While Joul is focused on the kid's exploration and playfulness, it serves as a conversation starter for parents to help them introduce sustainable thinking in a more tangible and explorative way. 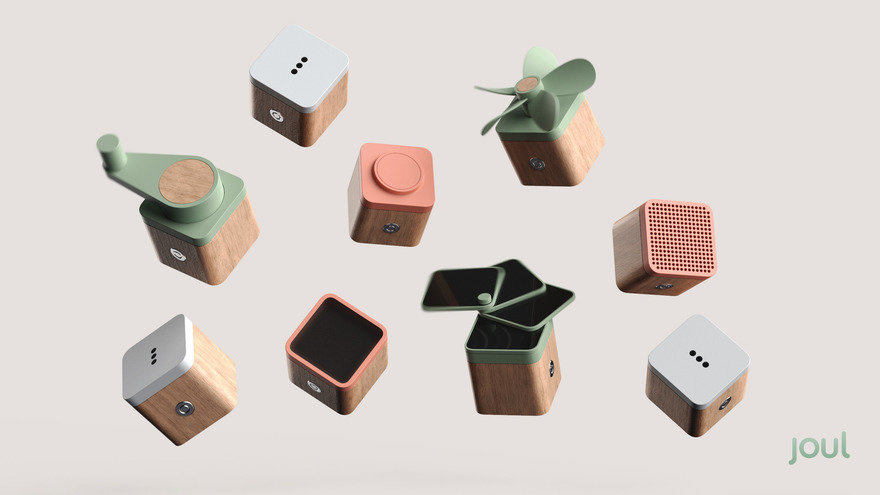 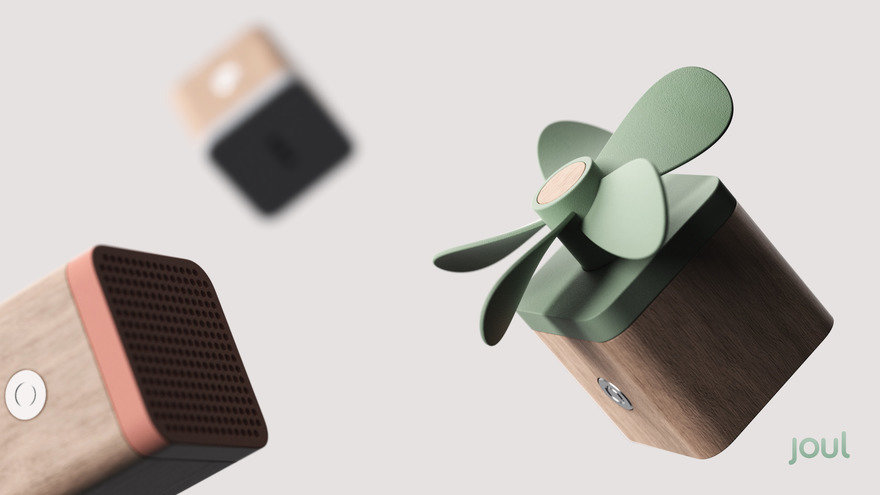 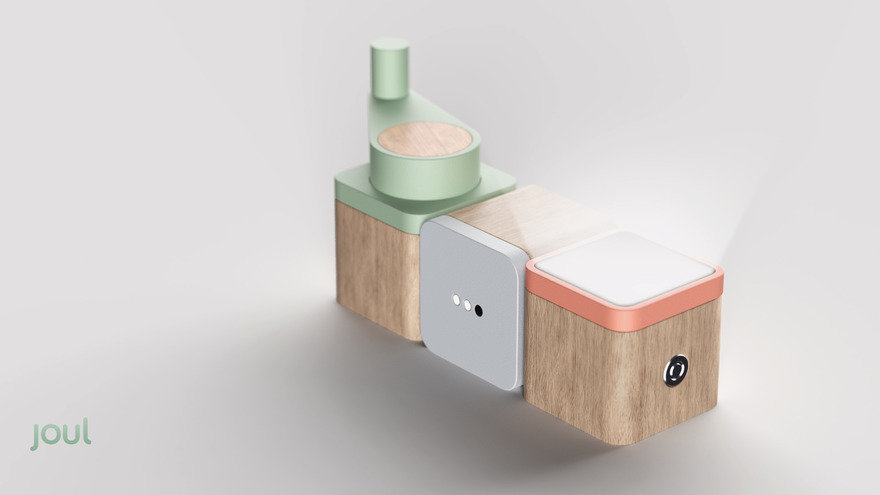 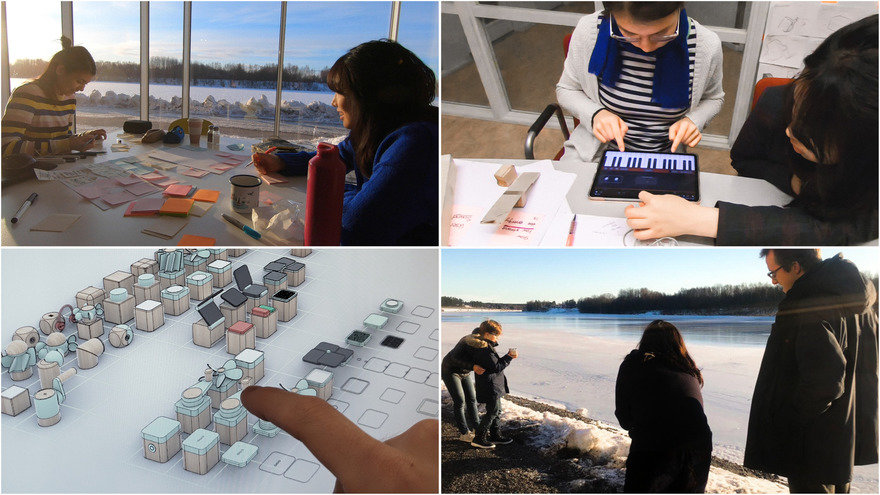 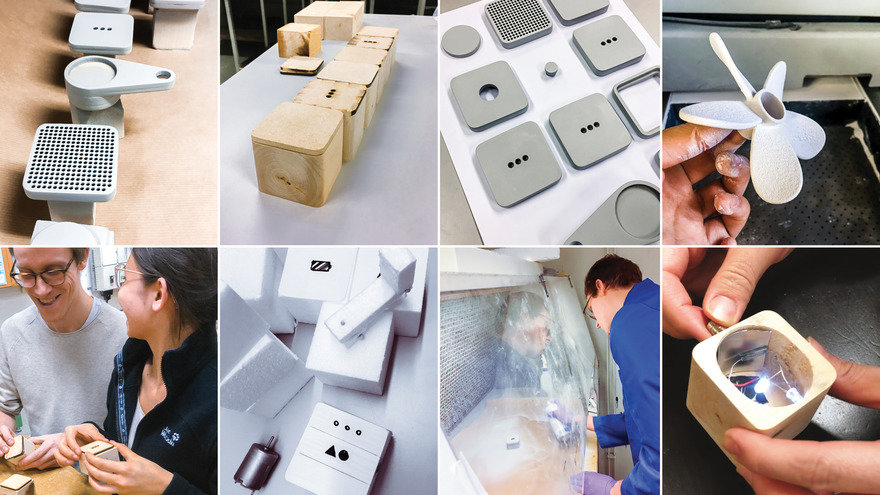 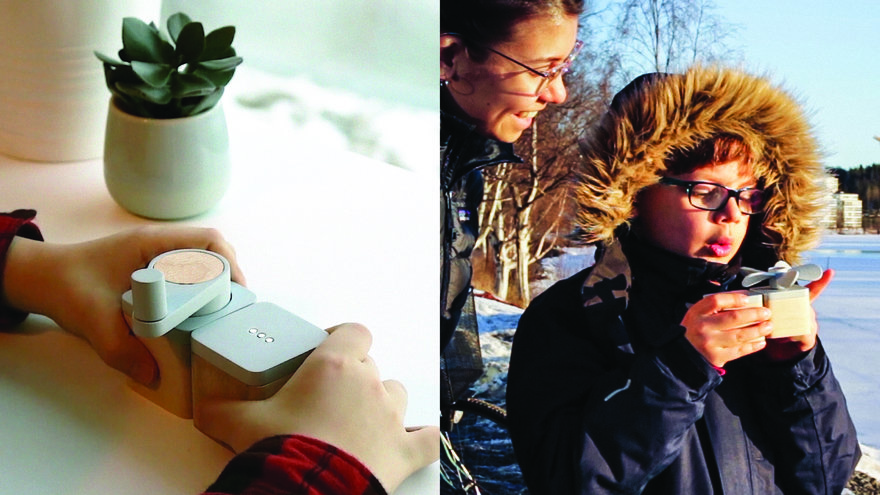 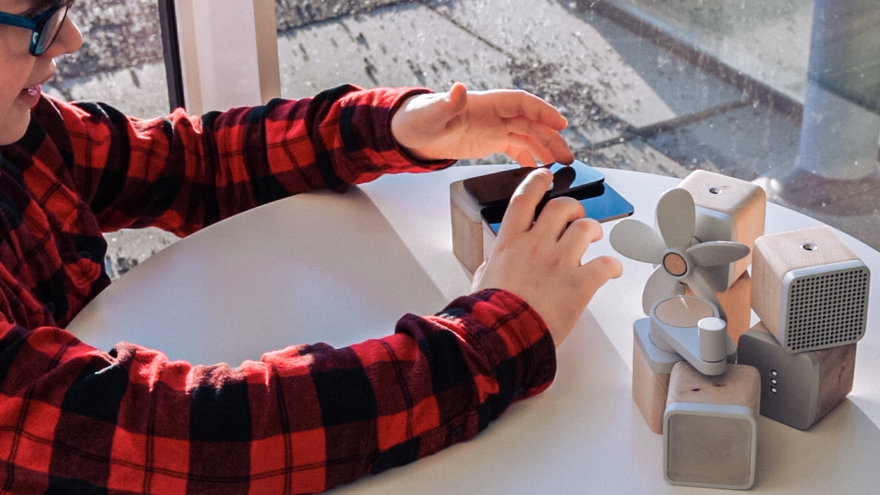 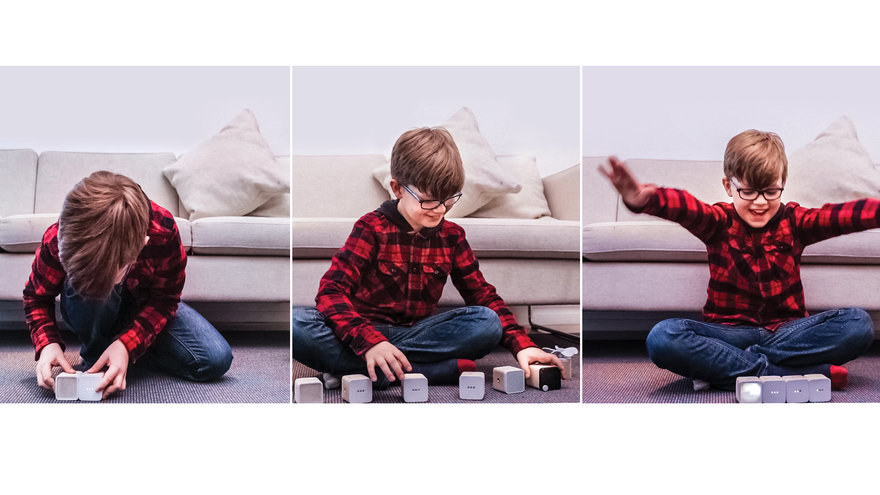 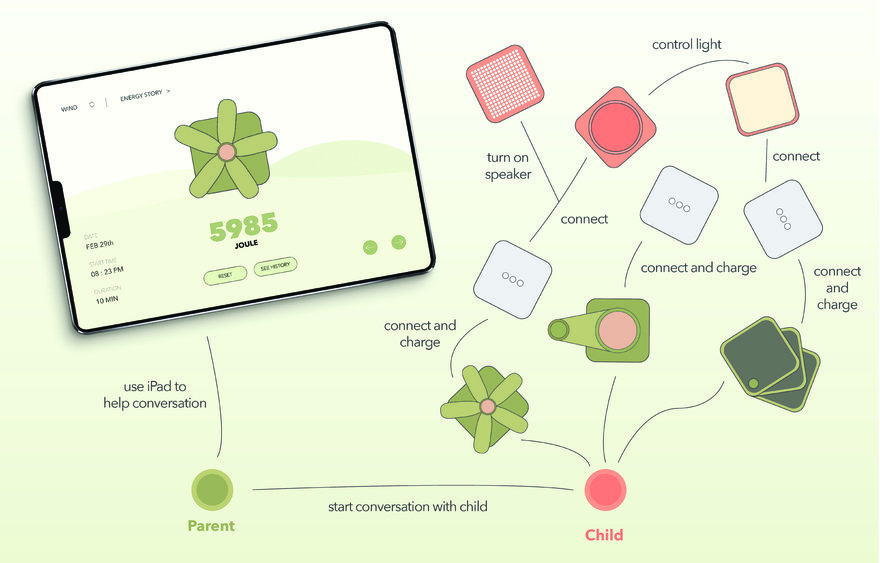 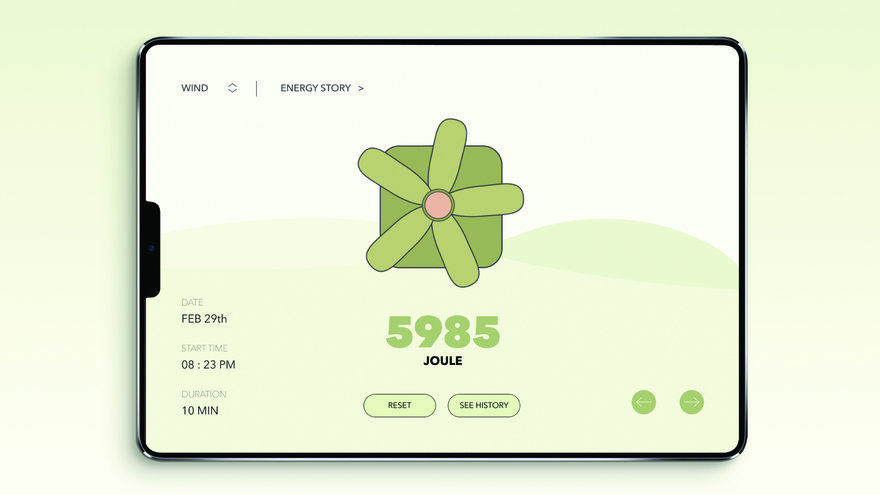 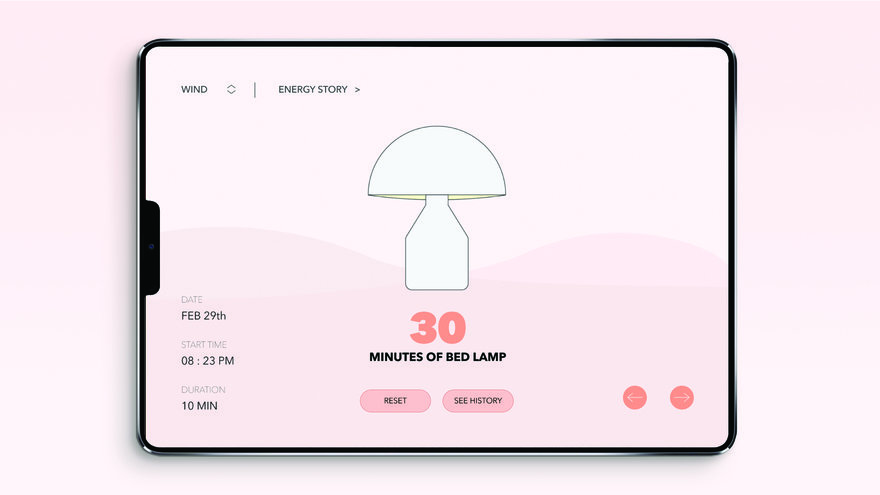 Joul is the result of a two week course at Umeå Institute of Design, done in a multidisciplinary team of three combining the skills of product design and interaction design.

RESEARCH Our team started out with the broad topic of teaching kids about sustainability.

We first started out with a brain-writing session, reflecting on our personal associations with sustainability and the problems, solutions and habits that are connected to it. We realized how sustainability is a broad and abstract concept that involves various stakeholders.

After listing our personal ideas, we wanted to hear the actual stories about early childhood learning and how parents approach this broad topic in their teaching. We conducted interviews with a young mother, a father and the curator of education and program at Bildmuseet in Umeå. We had three main findings from our interviews: urgency of teaching sustainability, difficulties in explaining abstract concepts and the importance of tangible shapes in children's learning.

We noticed a differing sense of urgency between different generations of parents regarding sustainability. Younger parents felt a stronger urgency to teach sustainable thinking to their children, but were unsure where to start.

The interviewed mother had difficulties describing abstract concepts such as, "what is electricity?" or "why is it important to plant trees?" at a level that her children would understand it. She is aware of her responsibility as a parent, as the first source of information to her children, and felt the need to explain it in the right way.

Through these interviews, we realized that there is an increasing need to teach sustainability and that it is not primarily about conveying micro-level habits like recycling or saving power, yet helping parents giving their children a bigger picture of our planet's resources, with energy as an important aspect.

With this in mind, we wanted to know how children between the age of four to six learn and explore. A visit to the local art museum left us inspired by the museums approach on children's workshops. A very important aspect they pointed out was to focus on asking children open-ended questions, giving them the opportunity to think freely and explore their thoughts, instead of being taught top-down, with questions that have a yes and no answer. The curator of education also emphasized how geometric shapes and abstraction generates the kids thoughts and allows them to structure their own ideas and be creative.

This research phase was narrowed down to two concepts: learning and teaching. We concluded that sustainability should not be something that is taught in a top-down approach, but rather as a concept that children can learn by themselves, giving them freedom for creativity and exploration. After this exploration process, our solution should act as a conversation starter for parents that they can use to explain important concepts through play.

METHOD Starting with our planet's resources, we decided to focus on energy, especially because of the fact that it is a resource that is hard to grasp and easily taken for granted. Early on in the process, rudimentary foam mockups and magnets helped to visualize the different types of modules and test different interactions. A user journey map of how children will play with the toy helped us understand the ideal use case from the kid's point of view.

SOLUTION Through this process, we came up with Joul. The concept consists of three types of modules for generation, storage and output. The blocks are different in shape and color, which the children can mix and match to their liking, while at the same time, experiencing the process of energy generation in a tangible and interactive way. Different energy types, such as kinetic, solar or wind energy are represented in the different generation block that can be connected to a battery block to charge it. This charging process is done through the child's physical interaction, which is supported by sounds that are changing in amplitude and rhythm to give feedback according to how strongly the blocks are charged. Blowing the wind turbines on the wind generator block or turning the handle on the kinetic generator block encourages children's physical activity and turns energy into something visible and tangible. The three little lights on the battery blocks can help the kid to visually quantify their charging status. Battery blocks containing this charged energy can be connected to the output blocks to create different feedback such as light, sound or vibration. This process allows children to directly see and experience the effect of the power they generated.

The blocks are assisted by a mobile interface, which shows the status of how much energy was created. It makes a visual analogy of what other activities and devices can be powered with the amount of energy charged. This helps children understand the connection between the amount of energy they charged and what this would be equivalent with, when e.g. making a lamp light up or using electronic devices. While younger kids can simply use Joul for play, it can thereby grow with the child as it gets older and help parents to get deeper into the topic, by reviewing the outcomes together with the child.

MODEL BUILDING & USER TESTING The physical models of Joul allowed for a real life user test of the concept with a six year old child. We used Joul as a conversation starter with the child to explain how the energy cycle works. We encountered a lot of questions from the child, asking what the black panels were in the solar generation block and asking if the three small lights in the battery block light up due to the energy generation.

SOUND DESIGN Joul incorporates sound as an interaction factor to make the process more playful and easily comprehensible. Early on in the process foam mockups were used to film a simple video sketch to test sound-effects for different actions. Specially designed sounds help the children link different sounds to the energy sources. The sound concept focuses on playful, wooden sounds, which go hand in hand with the natural material of the wooden blocks. Tones from the marimba characterize the connection between different blocks. The act of adding more energy by stacking the storage blocks onto each other is described by different tones adding up and creating harmonies. The sounds of the different generators are created through a combination of sounds that are inspired by the operational sound of the individual generator type and fitting instruments. Wind energy is aurally described through a flute sound that is created through air, while solar energy has a ray sound-effect utilizing guitar strings.

Joul allows children to explore the energy cycle in a broader context and helps them understand the general concept of sustainability from an early age on. By using what they produced themselves, children build the foundations for sustainable thinking indirectly through play.