ISA10 is an intuitive Epinephrine auto-injector for patients with severe allergy that guides users with sound and light, ensuring correct usage of the device.

84% of the patients need our help
Anaphylaxis is a severe and rapid allergic reaction that may potentially be fatal and requires injection of Epinephrine within minutes from the onset of the attack. According to research currently 84% of patients misuse auto-injectors. This project offers a fresh perspective on preventing errors and helping patients stay safe by providing visual and auditory feedback.

Empowering patients, not stigmatizing them
ISA10 was designed to be a helpful companion. It's form language is not intimidating and allows to handle it in a discreet manner even in public spaces. Additionally shape of the device helps to use it correctly.

It's not only a device, it's a support system
Mobile application accompanying ISA10 can contact hospital, help locate auto-injector, provide reminders about the expiration date and ask doctor's office for a prescription renewal.

While ISA10 takes care of the patients, they can take care of the environment
Unlike other devices of this type ISA10 consist of disposable capsules and reusable core element that helps to minimize medical waste. It can also potentially lower the cost of a single injection. 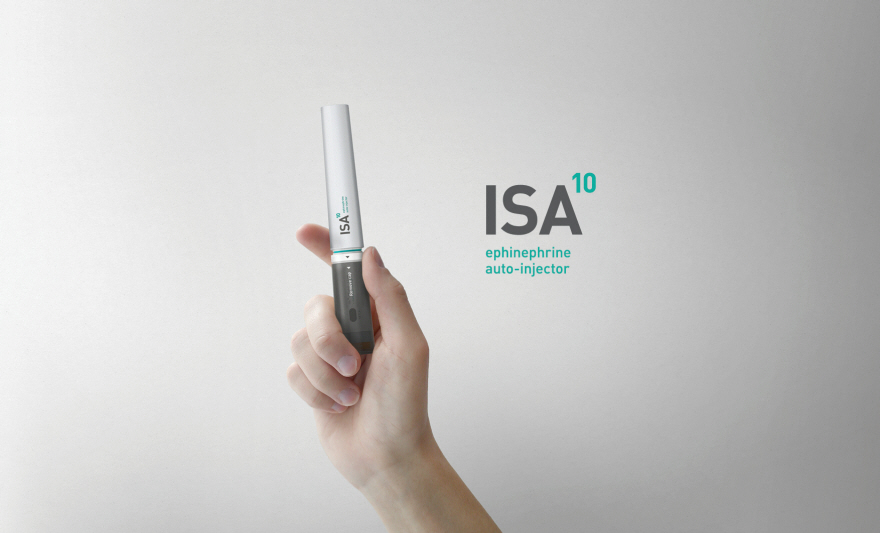 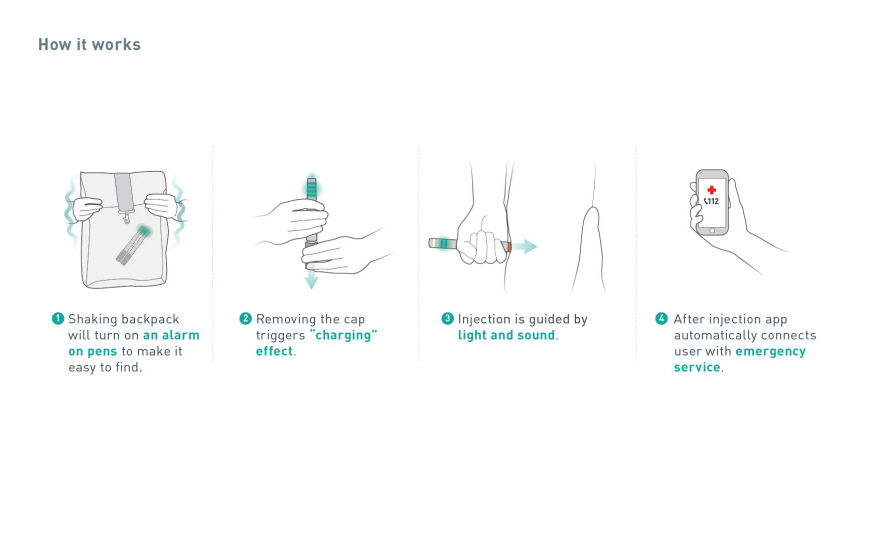 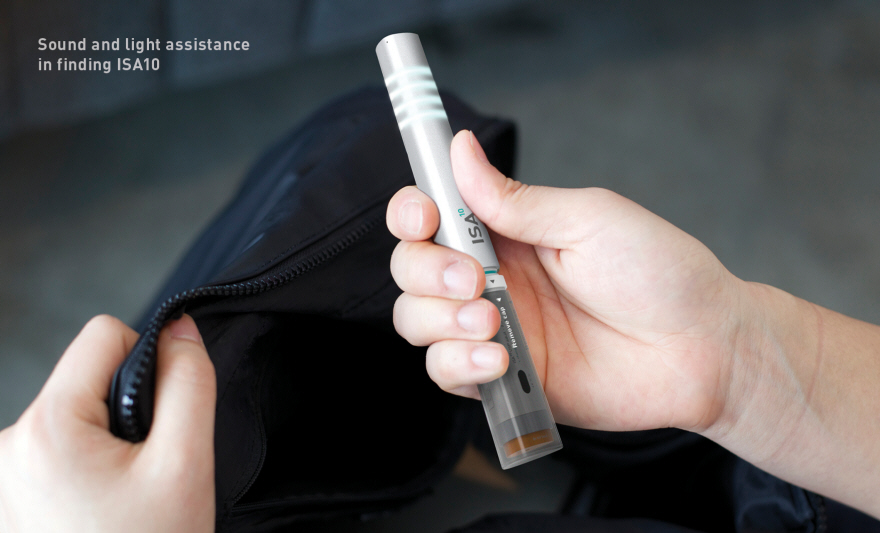 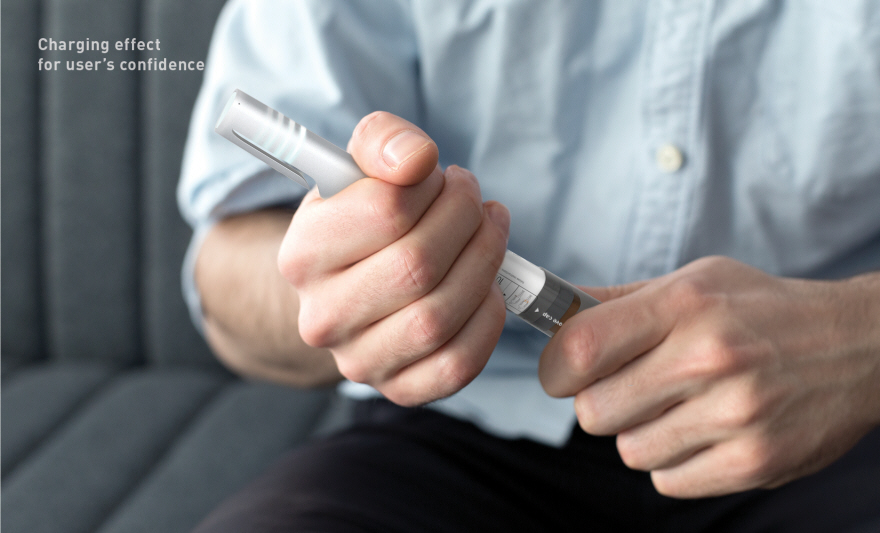 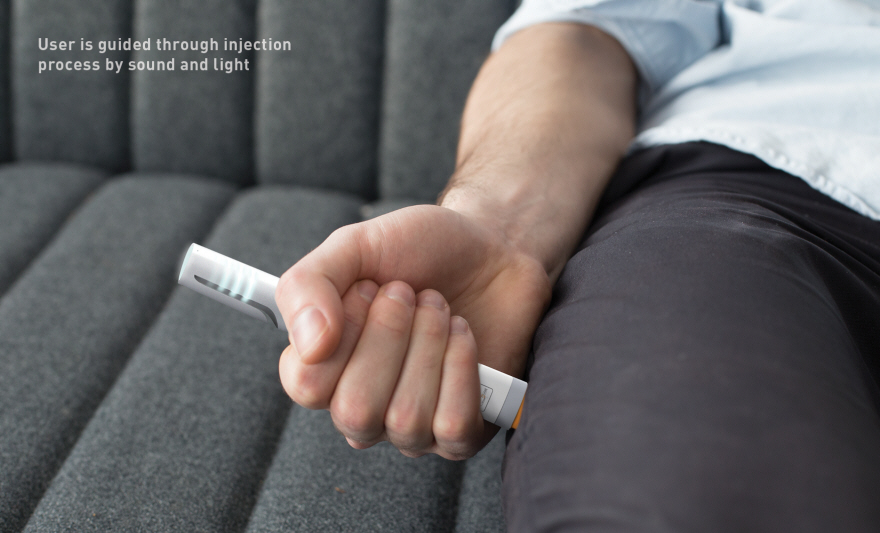 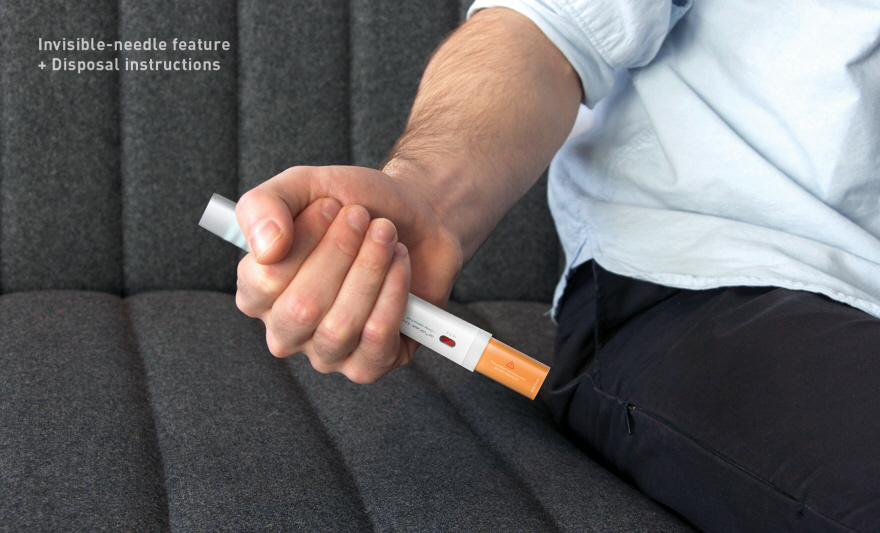 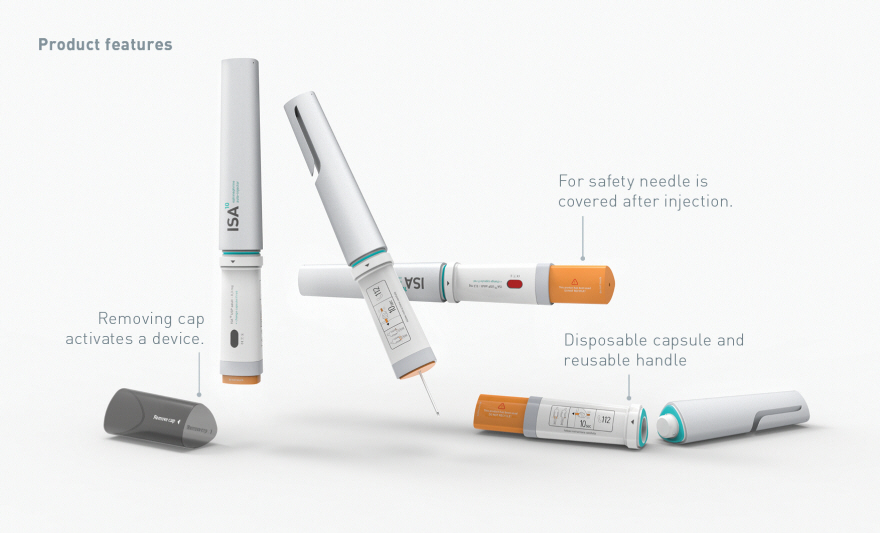 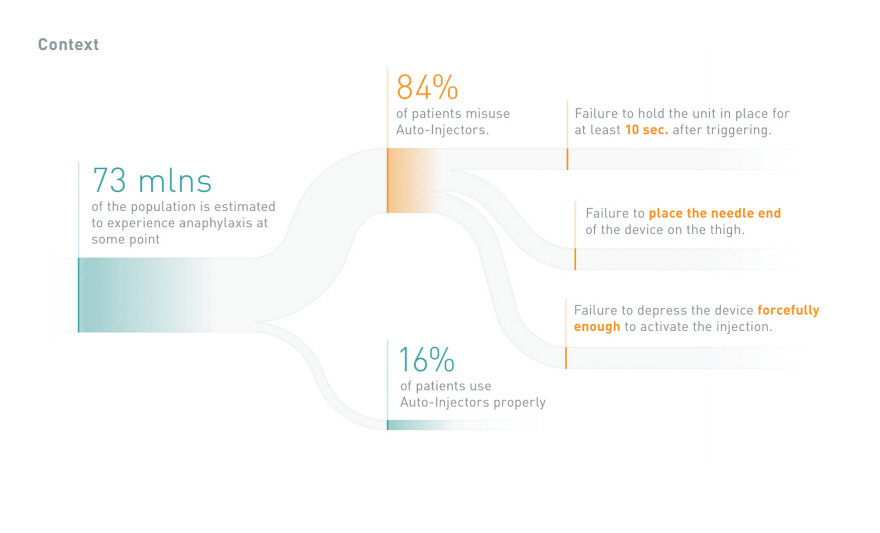 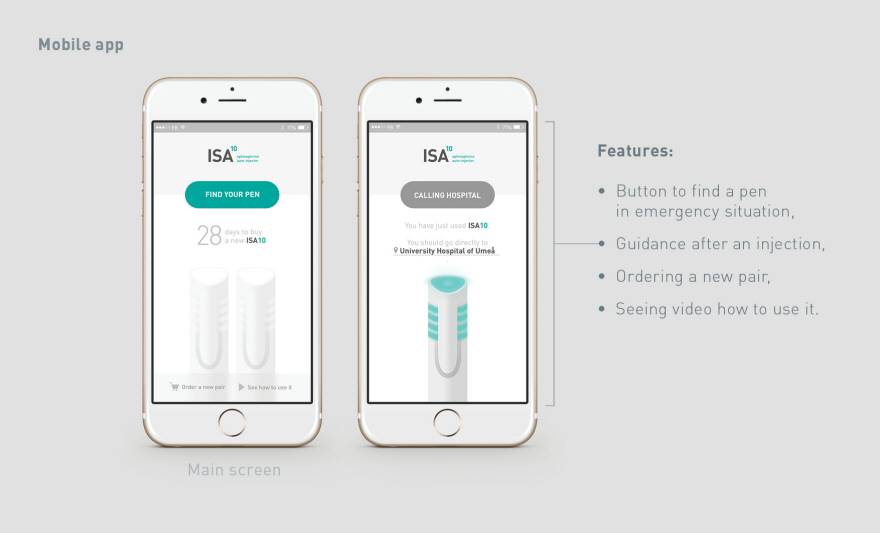 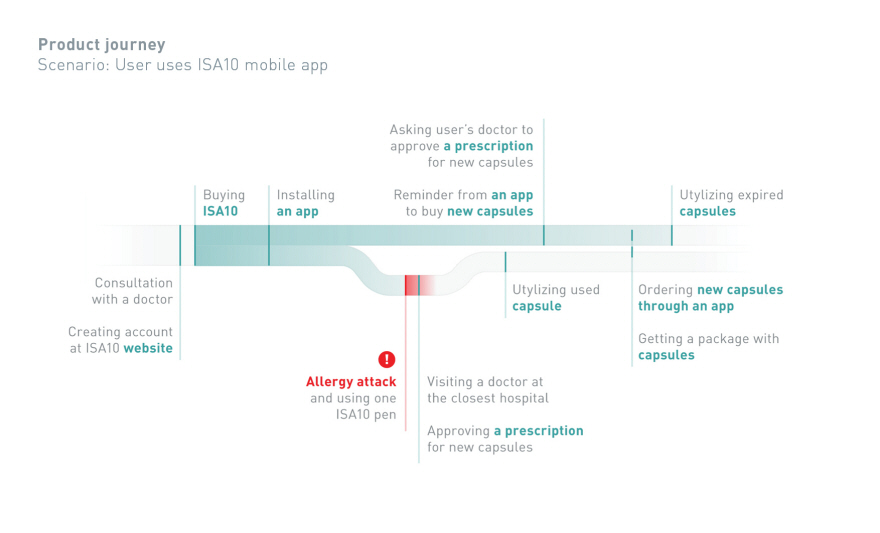 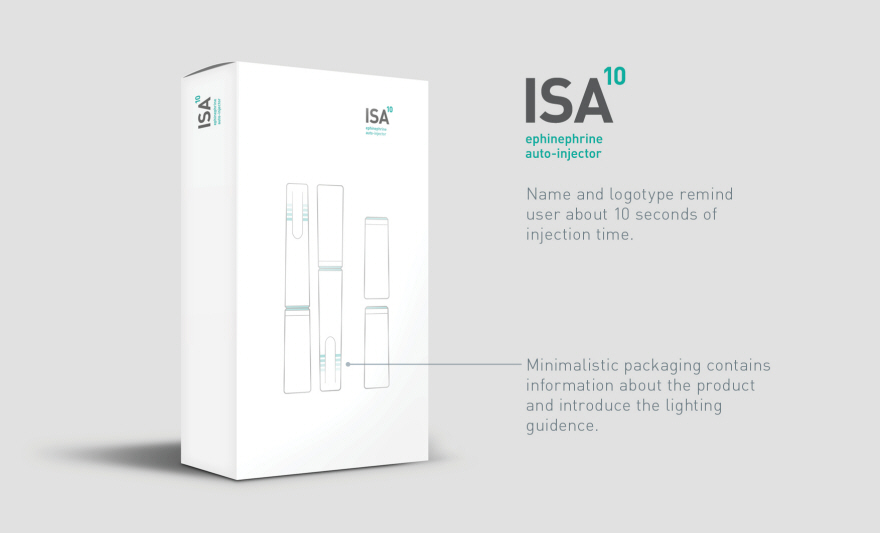 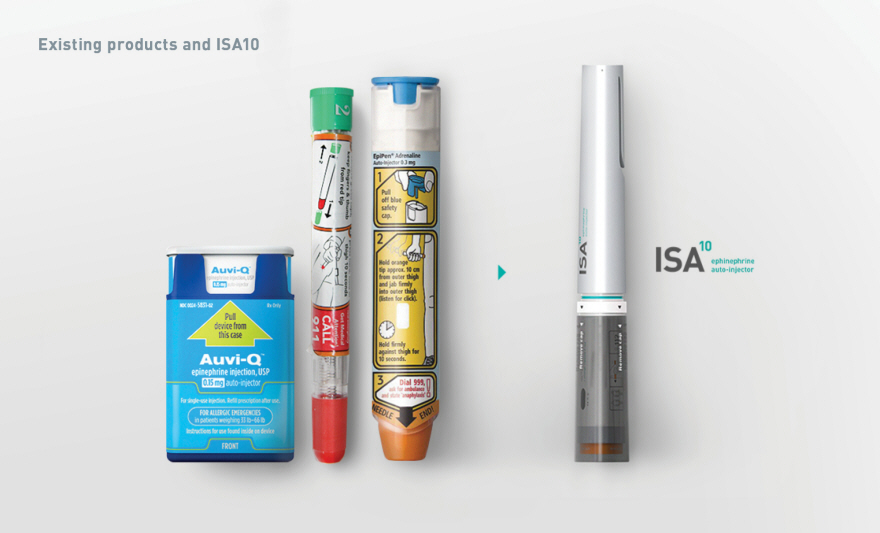 Current problem
Anaphylaxis is a severe and rapid allergic reaction that may potentially be fatal. It is estimated that 0.05–2% of the population experience anaphylaxis reaction at some point in their lives, which amounts to 73 000 000 people who need to receive Epinephrine injection within minutes from the beginning of the attack.

Meanwhile according to research 84% of patients misuse auto-injectors. This massive amount of failures to use it correctly is mostly due to three types of errors: failure to hold the device in place for at least 10 seconds after triggering, placing the wrong end of the device on the thigh and not pressing the device forcefully enough to activate the injection.

This project aimed to tackle the following design question: How can we create intuitive auto-injector? Objective being to guide user through the process so no prior training in using the device is needed.

Users
However this product is addressed to a wide audience of severe allergy sufferers, this design process was focused on young adults. Early adulthood is the transition time when patients become responsible for their own medication. Meanwhile it is not uncommon that they enter new environment of school or work where stigmatising injectors might feel like a burden.

Interviews with patients
We conducted two interviews with people with mild allergies and one person with severe allergy. In context of this project the latter proven to be more informative and gave a good understanding of current problems:

Intimidating look
First issue that arose during the interview was the intimidating look of currently available auto-injectors. They are overly complicated and attract a lot of attention if seen by others. Patients with a severe allergy should carry two auto-injectors with them at all times, but their bulky design makes it hard to keep in a small purse or pocket.

Visual overload
Existing solutions don't provide clear instruction, additionally it's usually only visual information. As the interviewee remarked: "Instructions on the pen are overwhelming" and as a consequence he never managed to read all of the information on the package.

Lack of feedback
While the duration of the injection is a vital factor in assessing if injection was successful, it is not communicated to the users in any other way than in a written instruction.

Finding auto-injector
There is no system in place to make it easier to find auto-injector when the allergic attack starts.

Maintenance
Users need to remember to renew auto-injectors every two years, even if they have not been used.

Initial solution
In a series of iterations, taking into account issues discovered in desk research and interviews, we made the decision to employ light and sound to guide user. Ambition of the team was to replace the need to read information with providing simple visual instruction, sensory guidance through sound/light, color coding and semantics of the object.

Research
First round of user-testing - Meaning of sound and light
First set of feedback sounds and light interactions was created to test with users. They were based on the metaphor of liquid escaping device during the injection. Initially each change during the interaction was marked with sound. Meanwhile dimming lights were indicating the passing of time as the injection was made.

In the first research we asked users to perform three tasks: initial walkthrough of the injection process with the sounds being played from the computer, presentation of simple light-sound animation and marking emotional reaction for each sound. This testing proved that the idea of sounds guiding user is understood, but it was overwhelming for participants to have each change marked with a new sound. Only main functions needed this type of feedback. Also dimming the light is too subtle for the users - gradual changes were too hard to notice. Lastly the slow rhythm of sound indicating injection had noticeable breaks between notes and some users seen them as an indication of completed process and in a consequence device could be removed prematurely.

Prototype building and sound adjustments before Wizard of Oz study
Accordingly with the outcome of the first study we adjusted sound and light interactions and built physical prototype to test it with users in the second study. It consisted of the main body and two push buttons. One of them was separate from the main body and triggered the reaction after taking off the cap of the pen. The other one was placed on the bottom of the pen and triggered feedback for the injection. Adafruit Audio FX Sound Board was connected directly to the buttons and small speaker to the soundboard. We placed five white LEDs SMD removed from a stripe inside a plastic tube to mimic the light interaction. For the main logic prototype was using Arduino Nano.

Second round of user-testing - Types of feedback
Wizard of Oz study was put in place in order to test if the sequence of interactions with the prototype was understandable without prior detailed instruction. All four users who have not used auto-injector before performed task correctly. One of them commented afterwards: "This sound somehow made me keep injector on my leg, even though initially I didn't know how long I'm suppose to do it."

Form exploration
As a result of form exploration we proposed a triangular shape for the main body of the device. It provides not only a firm grip, but also prevents the device from rolling away when placed on a flat surface. Conical shape indicates the direction of injection and helps to keep it at the right angle when positioned against the thigh.

We also decided that device would consist of two parts: disposable capsule (containing the needle and dose of Epinephrine) and a reusable handle with the electronic elements. Removing the capsule is very simple since splitline is indicated with the color. Triangular shape helps to place new capsule in the right position. Cap of the auto-injector is semi-transparent to show that there is an important function underneath.

Benefits of the final solution

ISA10 is an intuitive Epinephrine auto-injector for patients with severe allergy.

Self-explanatory
Device guides users with sound and light ensuring correct usage of the device. The sequence of sound and light indicating the duration of the injection is preventing one of the most common mistakes - not keeping self-injector long enough on the thigh. Color coding and shape of the device help to place it in a correct position while ergonomic shape gives a good grip. Additional combination of light and sound feedback ensures that device can be used in an environment when one of the stimulus is limited (like noisy street), but also provide solution for people with visual or hearing impairment.

Portable
Since user needs to carry two auto-injectors ISA10 is fitted with magnetic attachment which makes it possible to connect them. It's also thinner than other injectors, allowing to be carried in small purses and pockets.

Reusable
While other solutions on the market are fully disposable ISA10 consist of disposable capsule and reusable handle. This solution can potentially decreases the costs of a single injection, is more sustainable and helps to establish more personal relationship with the device. Also it creates less medical waste (medical sharps) that needs to be handled by the users according to the local regulations.

Providing smart assistance
ISA10 can be used as a stand-alone device or synchronized with a simple mobile application. Mobile application provides reminders about the expiration date of the capsules and informs doctor's office that prescription needs to be renewed in the system.

Auto-injector alarm helping to find the device can be triggered by one click in the application or strong shake of the bag or backpack. After the injection is completed application is connecting patient with the nearest hospital. It is a necessary step since after each application of Epinephrine medical consultation is required. Application also informs doctor's office that prescription needs to be renewed in the system after capsule was used.

The designers of ISA-10 clearly took time to research and understand their users and the specific challenges of the situations in which epi-pens are used.

The ISA-10 creates a supportive, clear, and simple user experience that can have a dramatic impact in a life-or-death situation.