Jam Blocks are a musical toy, designed to bring music therapy into the home. Jam Blocks allow parents to develop their children's social communication skills, through a range of musical games. Like a deck of cards, there is no right or wrong way to use the Jam Blocks, you can make up your own games, or play some of the suggested games.

Developed with psychologists, speech therapists, music therapists and autism specialists, the games enable parents to train the foundations of social communication - eye contact, turn taking and joint attention. Games such as 'Copy Me', 'Musical Statues' and 'Build-It-Up', allow parents to have musical conversations with their child, and can also help develop memory and concentration skills.

In addition, the Jam Blocks may also be used by two children. In this context, the same social communication skills of eye-contact, turn-taking and joint attention can be developed through the musical games. It is in this context, that some of the most novel and inventive games have been devised, by the children themselves. 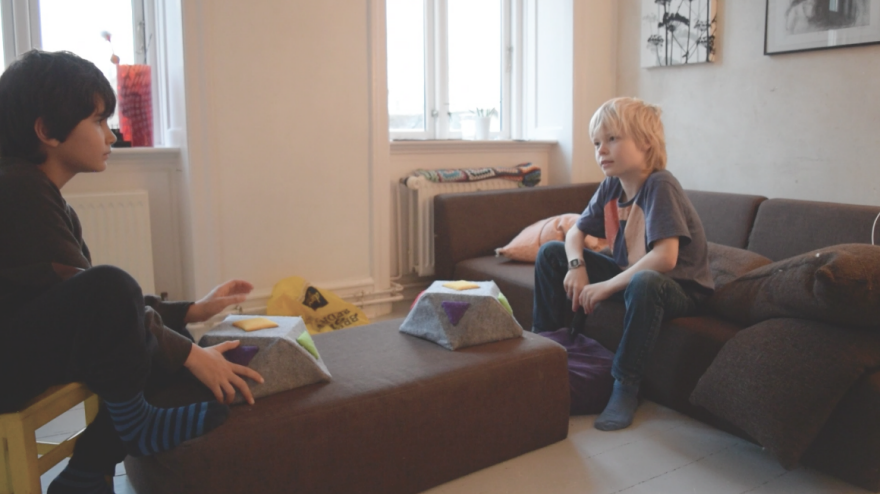 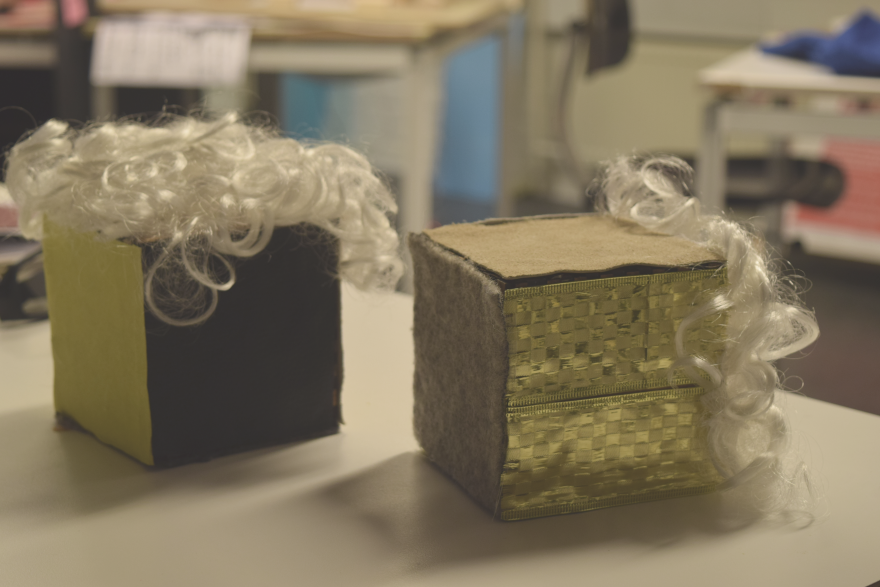 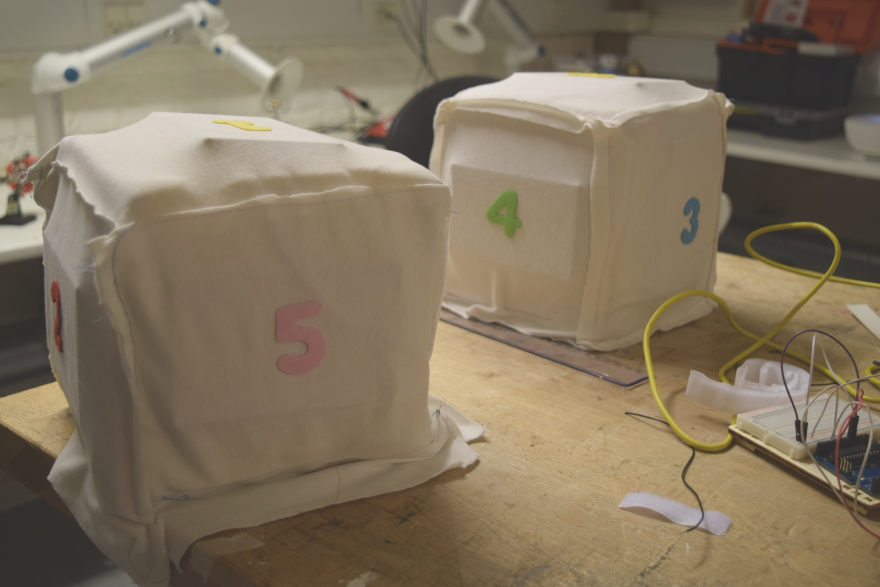 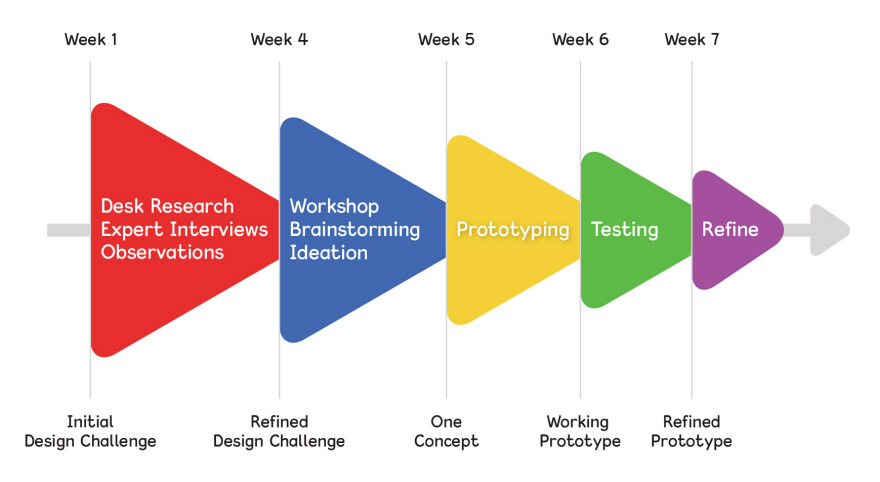 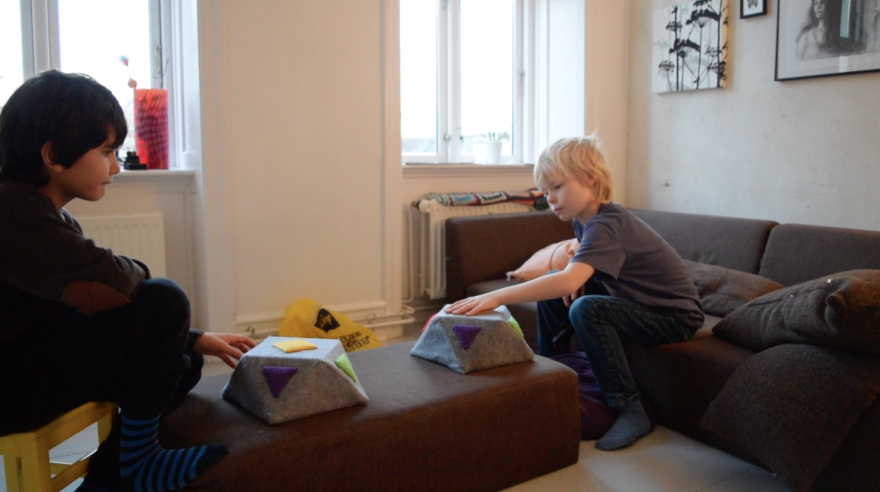 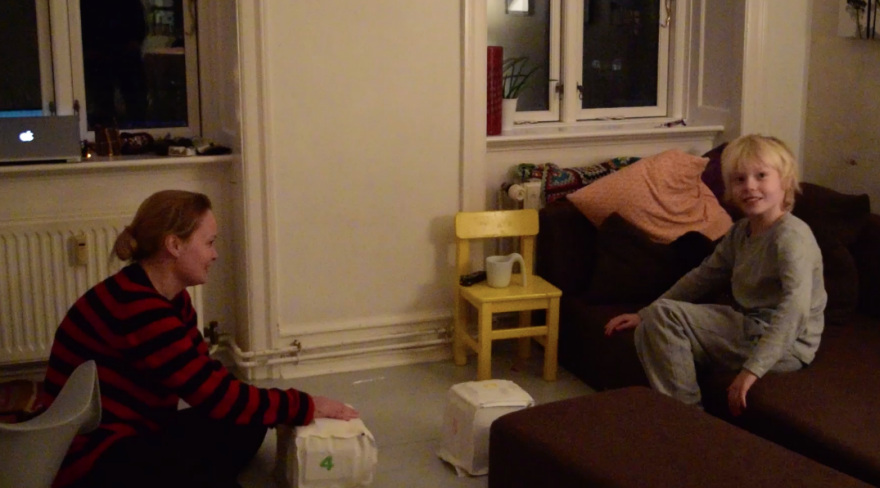 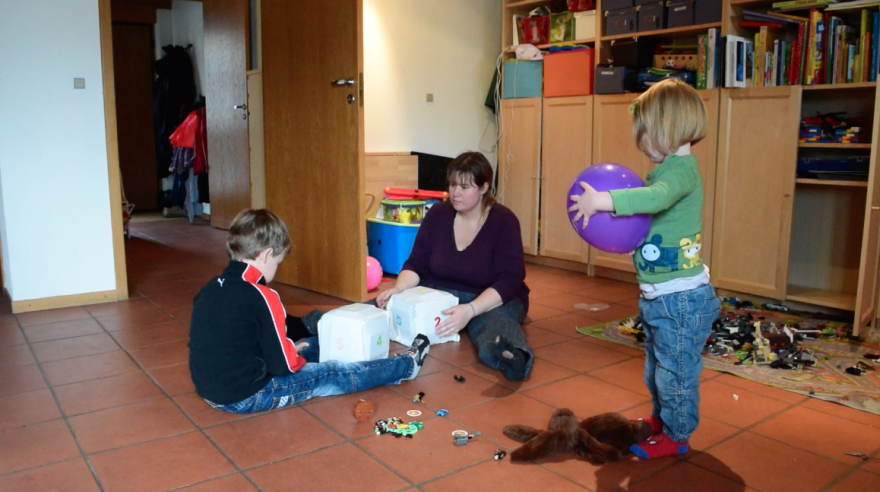 User testing Testing the block prototype with a parent and child 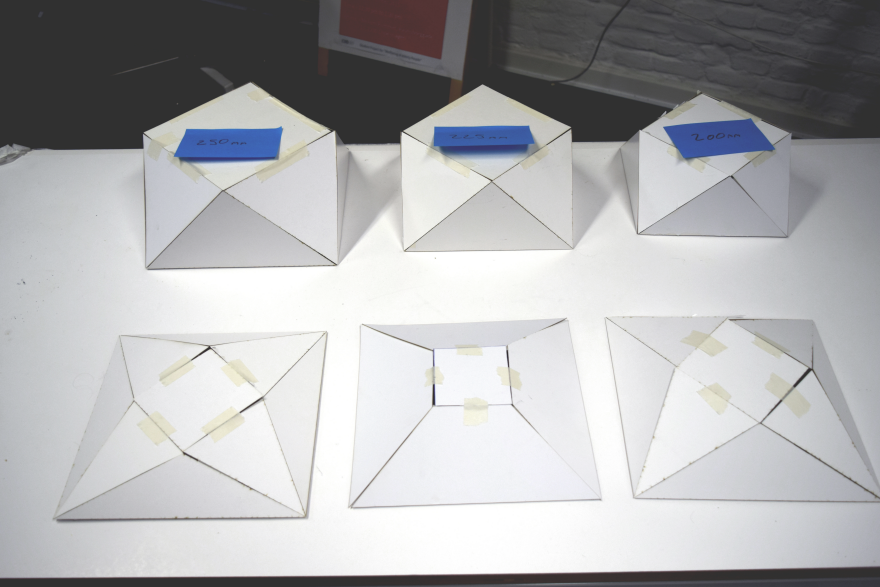 Form exploration Moving from the block prototype, I wanted to refine the form. I used paper to explore different options for the form. 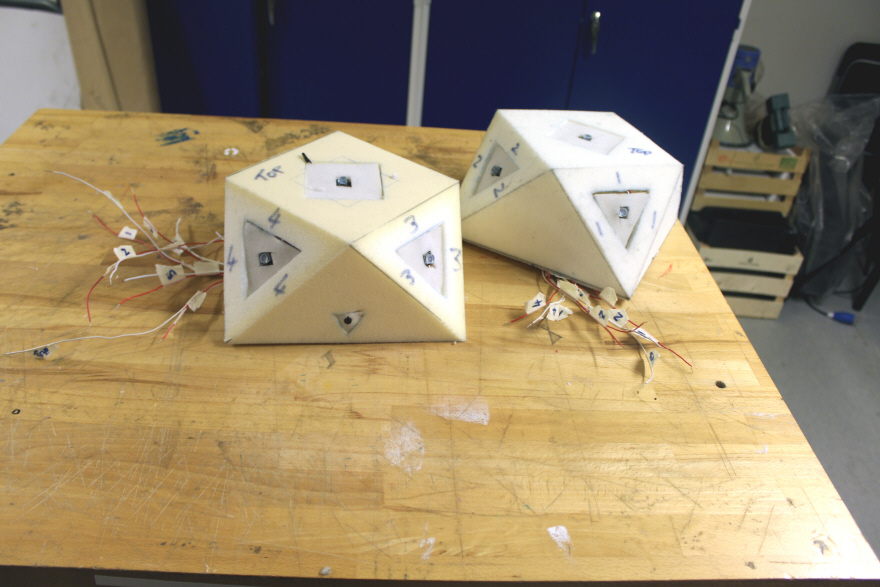 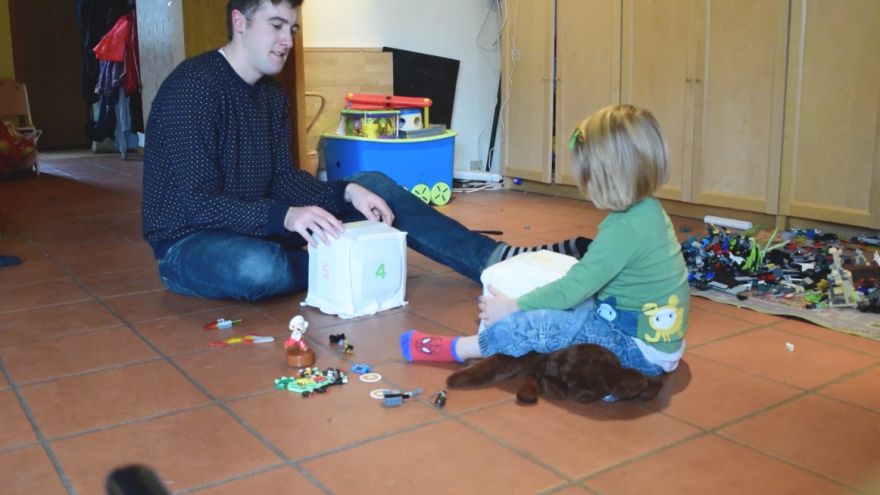 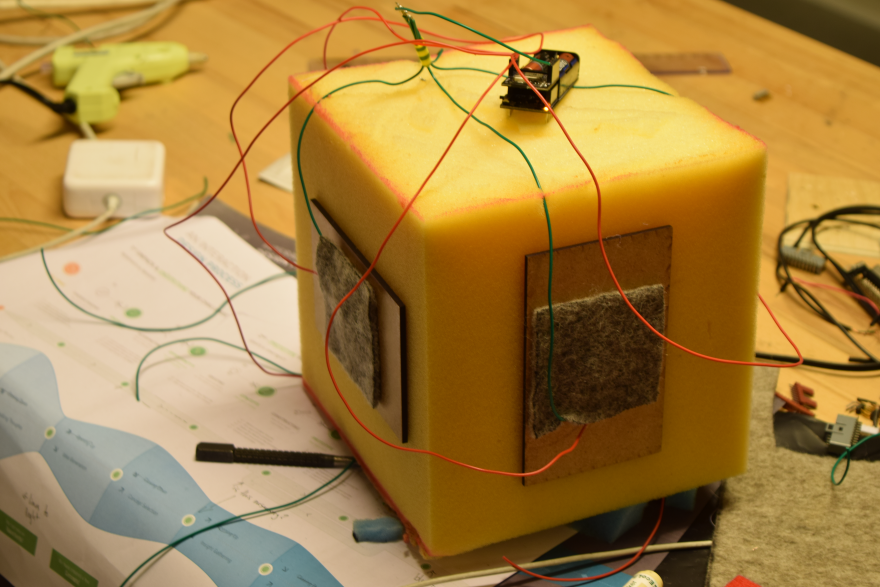 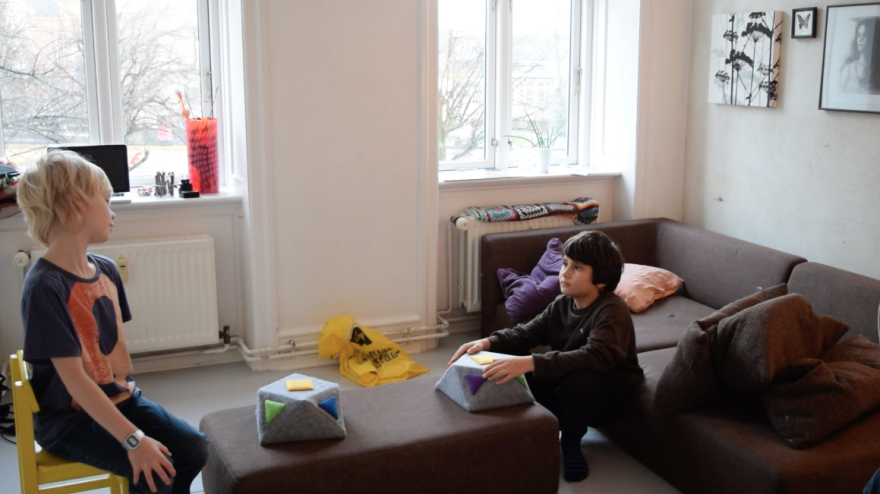 This was an eight-week, individual, thesis project. I started by trying to articulate the impact I hoped to create with the project. "I want to help children with autism learn to communicate using music". This became my initial design challenge. I used the next three week of the project to inform and refine that design challenge, through a series of expert interviews, observations and workshops.

I spoke to a range of different experts, across different domains, in order to form this refined design challenge. I spoke to speech therapists, clinical psychologists and autism specialists as well as music therapists. I wanted to understand how therapists in different domains help children with autism to communicate.

I also spoke to parents and families with children with autism, to try to understand the challenges they face in their daily lives. One of the most inspirational things I discovered, was how music therapists have a unique bond with their clients, as a result of the musical games they play. I was keen to explore how parents could have a similar bond with their child, also using music.

Two key insights that shaped the project were the following:

#1 Facilitating early attachment and interactions between autistic children and their parents, can help children learn the building blocks of social communication.

#2 Eye-contact, turn-taking, joint attention and emotional recognition are the foundations of social communication.

This led me towards defining the opportunity area as follows:

There is an opportunity to empower parents to develop their children's social communication, in the context of their own home, using music.

My refined design challenge, going into the ideation phase, was to 'improve the social communication skills of children with autism, aged 4-12, by creating a tangible music device to facilitate social interactions between children and their parents'. I also defined social interactions as eye-contact, turn-taking and joint attention. These are the foundations of all communication and are the core skills music therapists try to develop with children with autism using music.

Moving into the ideation phase, I began by hosting a workshop with 10 musicians. I was eager to see what new interactions for a tangible musical device they could come up with, as experts of their craft. We lo-fi prototyped their ideas before a music therapist gave a short talk on how she works with children with autism. After this talk, we spoke about how the participants would modify their instruments for use in this context.

I also visited a school for children with autism, in the early stages of my ideation phase. I had the privilege of observing many different activities, from speech therapy to maths class and special social integration classes. One very inspiring teacher was using board games as a tool to teach two children the concept of turn-taking and winning and losing. This was a very powerful moment for me along my design process and got me thinking of how board games in general can facilitate for social communication.

Inspired by what I had seen at the school, I conducted some brainstorming sessions in which I asked participants to imagine how they could infuse music into existing board games. This gave me a lot of ideas on things like musical chess and musical dominoes. I envisaged the music capturing the children's attention and the game facilitating things like eye-contact, turn taking and joint attention.

I began prototyping with the idea of musical dominoes. I made a paper prototype of the game and tested it wizard-of-oz style. I learned quickly that there were too many rules. Some of the design norms I had set myself before prototyping, was that the solution should a) always sound good and b) never be 'wrong'.

I simplified the dominoes game by putting the dominoes together into a cube form. This immediately made it easier to jam together and for users to have 'musical conversations' together. I then spent time prototyping the exact musical interactions of the devices. I wanted to ensure that the sample lengths allowed for a range of different games. At the same time, I wanted to ensure that users could invent their own games.

I began by allowing users to control a range of different instruments and asking them to jam together. In the end, as the instrumentation became simpler, users understood more of what they could control, and they began to have more social interactions with each other. Suddenly, they were trading solos, making eye-contact and inventing their own was to jam together. This was a breakthrough moment for me as up until this point, I was struggling to see how the musical samples alone, could facilitate for social interactions.

After an extensive period of time prototyping, both the musical interactions and the form, I tested a working block prototype with some families in Copenhagen. This allowed me to validate certain aspects of the design and refine others.

Taking a prototype out to users taught me a lot about my design; some aspects were confirmed and others need refinement. The musical interactions worked well; users enjoyed playing the variety of sounds and were able to invent games easily that lasted for hours on end. The form was something I always intended to return to. The block shape had a lot of usability issues with it and so I needed to explore it some more.

I spent a long time paper prototyping the form, and once I had a more interesting shape, that allowed for downward pressure to trigger all of the samples, I was eager to test it again. I then set about increasing the fidelity of the music samples by custom composing the sounds from scratch.

Previously, I was using midi samples but for the final prototype, I wrote composed special sounds, based on the instrumentation, register and styles that I had explored using midi. I assembled some musicians and recorded the sounds. I was keen to ensure that there were both high energy and more calming sounds available so that parents could match the energy levels of their child and then explore elevating or deflating them as required.

Using an RFduino and Ableton it was relatively simple to make a functioning prototype of the design and test it again with parents and children.

Playing with the Jam Blocks for 20 minutes before bed, with calming sounds, proved to be a very useful routine for parents and children. Parents could spend 20 minutes engaging their child in something and practising taking turns, before tucking them in for the evening.

The final prototype maintains the soft foam core of previous prototypes. This makes it very durable and child-friendly. It is coated in a fine felt material, very soft to the touch, as children with autism are often sensitive to touch. The colour coded samples allow children build up sequences of colours and each Jam Block has 5 instrument banks.

Parents can use the games to develop their children's social communication skills. Music has a unique ability to arrest children's attention, helping them maintain focus and attention. Similarly, the games require at least two players and all of them require a degree of imitation or turn-taking. This helps children learn to take turns and to watch for visual cues on when to enter. Creating that excuse for eye-contact gave parents those magic moments in which they were 'jamming' and bonding, with their child.

Jam Blocks impressed us with its ability to solve a very straightforward problem: help children on the spectrum engage with rhythm and other people through the use of musical stimuli.

We were impressed with how children seemed to respond to the device and think that there is a lot of promise in something like Jam Blocks to evolve into a product that solves a real problem and helps more people.