A picture is worth 1000 words. Great visuals can enhance, dramatize and even bend the narrative. From historical photos to modern-day digital images made of millions of pixels, images have always been instrumental in shaping our visual understanding of the world around us. As much as they have been instrumental in shaping reality, easy access to image manipulation has also resulted in widespread misinformation. When we can fake anything, honest representation of reality in images has become a complex problem to crack.

After multiple design explorations, I realized a need for a fundamental change in our interaction with images. This project explored how any image could be used to expose the viewer to multiple perspectives. It resulted in the SHIFT concept, which re-imagines the future of still imagery in an 'interrogative' way.

SHIFT is an 'image probing tool' that enables a new methodology of exploring multiple perspectives of a context. When multiple images are taken of the same context, they build a rich collection of diverse perspectives. Shift connects these images and uses any image as a visual search tool to uncover alternate perspectives from the same scene. It thus helps people to discover alternate ways of seeing the same context. It is not an attempt to challenge image manipulation technology but to use images as a means to develop a more informed understanding of the reality they represent. 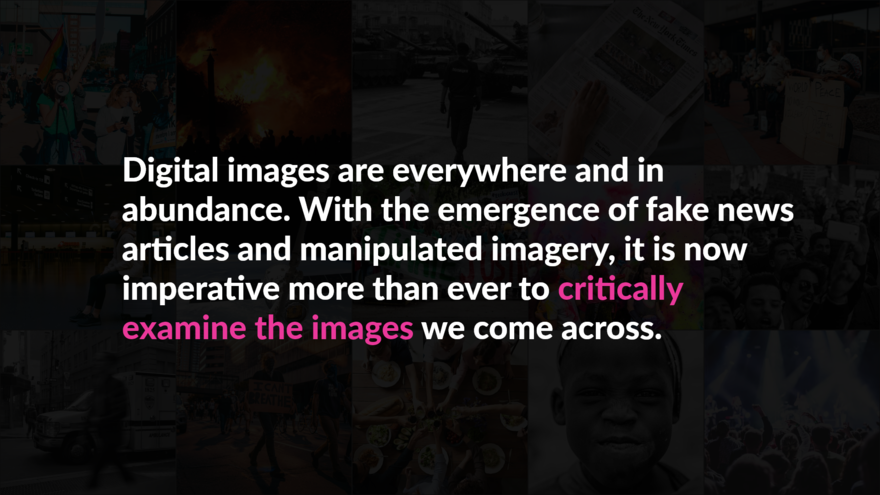 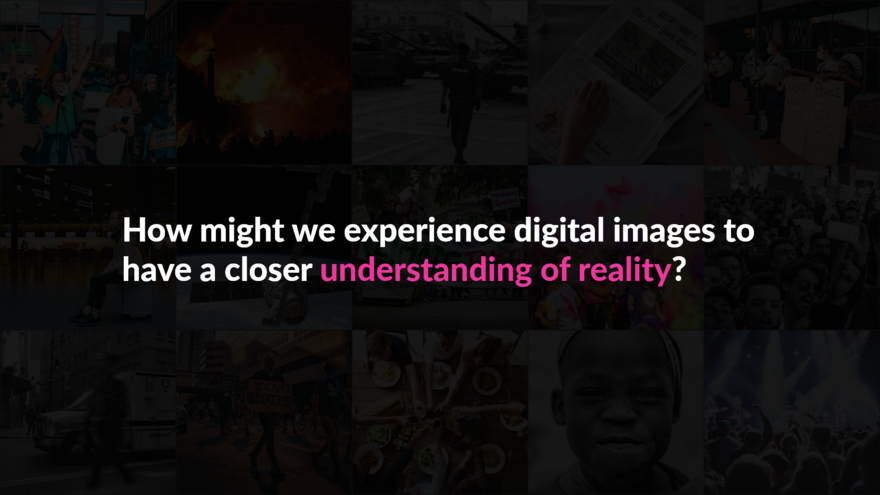 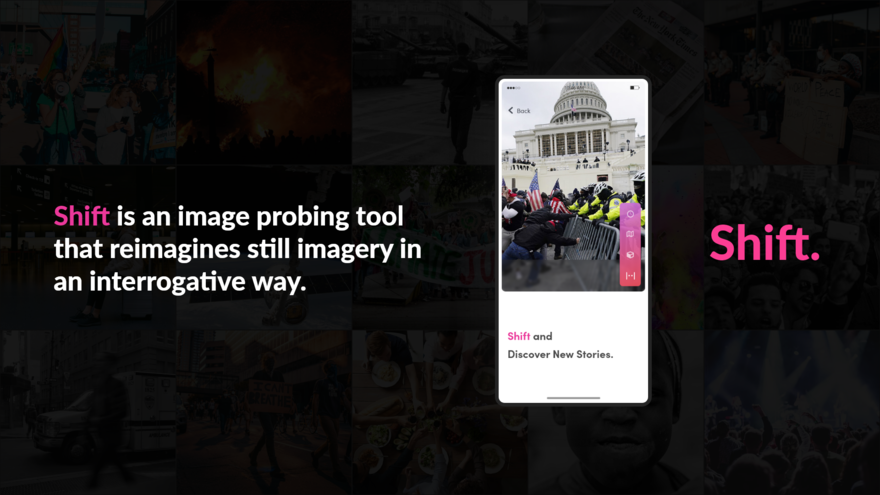 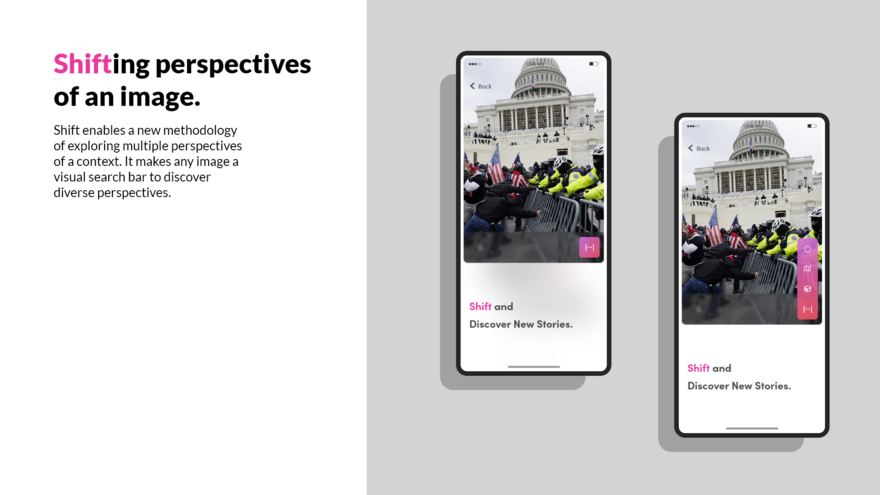 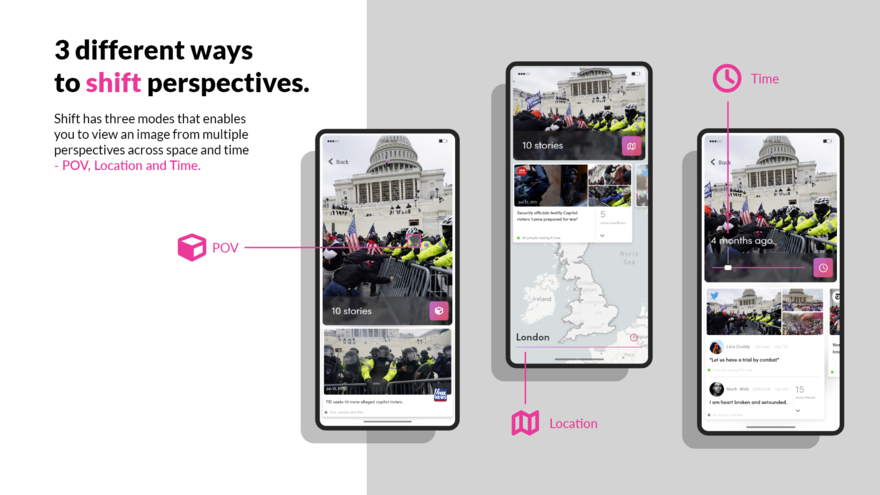 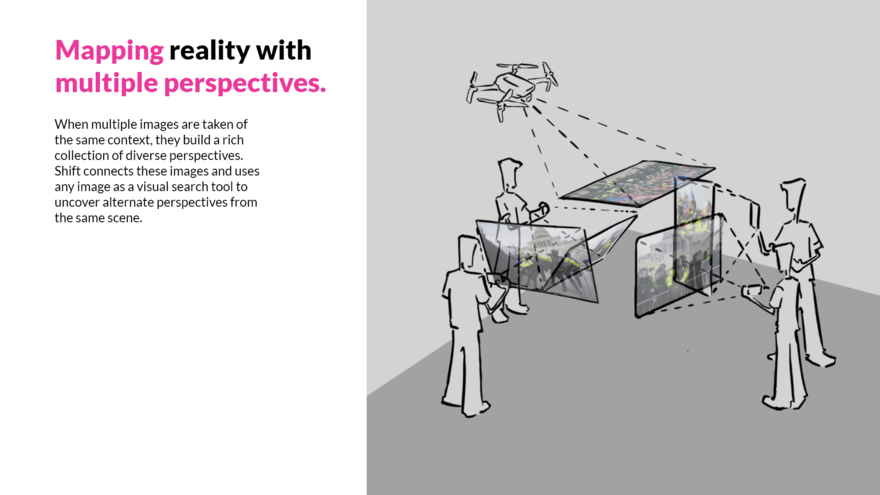 Shift A cartography of perspectives 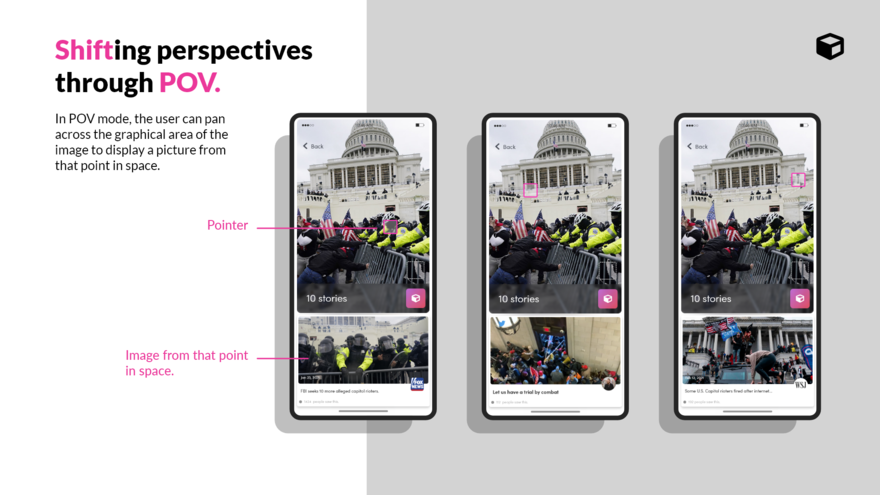 Shifting POV Seeing the picture from a different point of view. 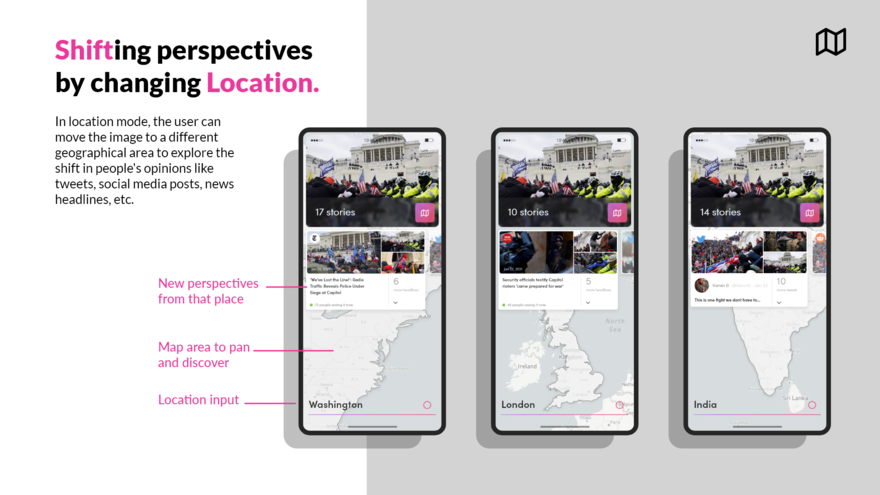 Shifting Location Taking the picture to a different location to see shift in people's opinion. 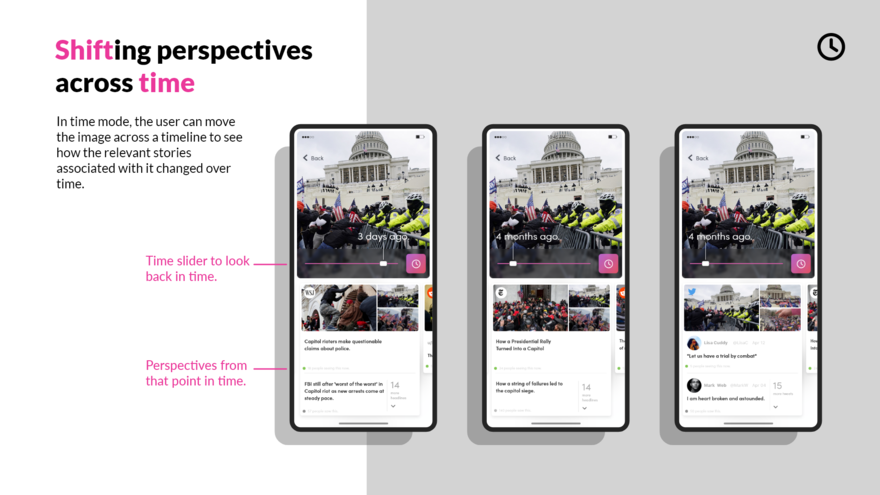 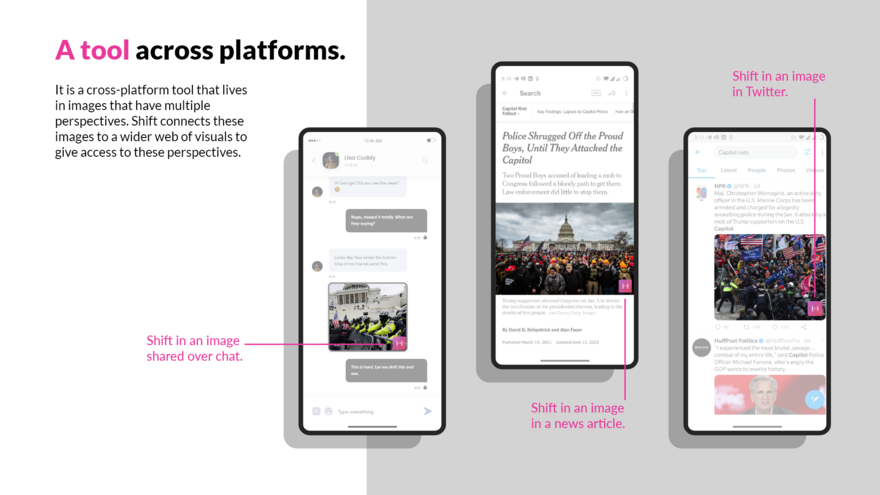 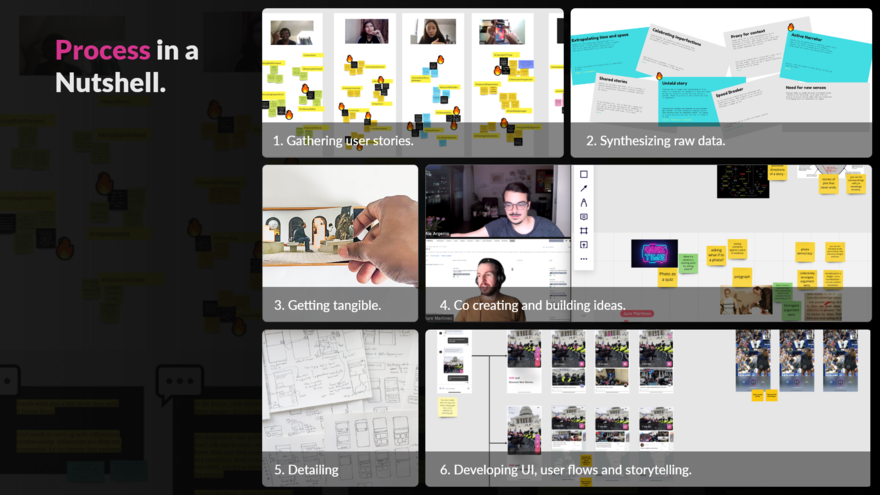 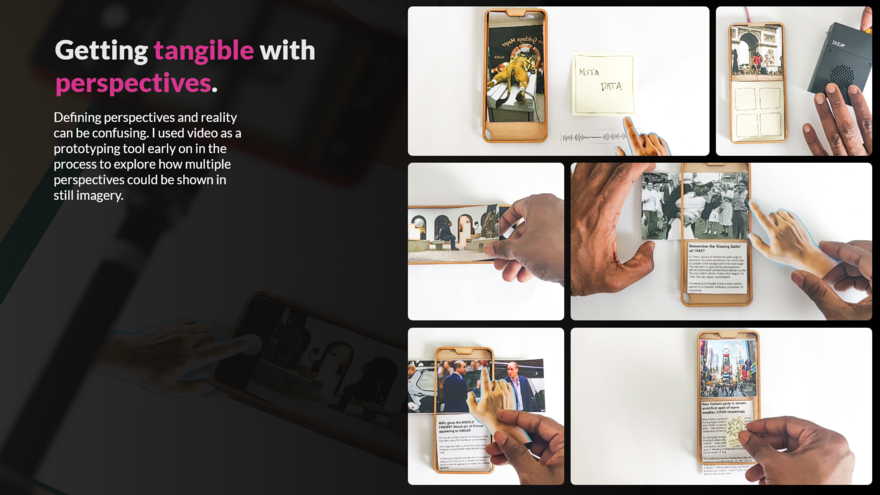 Getting Tangible Tangible exploration of a digital experience

'Photos never lie' - when we look back, that was our childhood, much before the digital society and app culture where everyone around walks with a smartphone camera. It was a time when photos were honest in representing reality. They used to be our trustable source to know about the people we never met, places we have never been to, and events we never could experience. As I grew up, I encountered multiple instances where the same images I used to trust once started to challenge me. Never before has it been easier to create imagery, and never before has it been more accessible to fake anything. Growing up with technology has made life easier for me, as I learned how not to trust what I see completely. But for people who grew up trusting their visual senses, it has become a hard thing to comprehend.

Figuratively speaking, SHIFT is a cartography of perspectives that maps all the viewpoints of the same scene into an image. It aims to reimagine the future of still imagery in an interrogative way. It gives access to a deeper and more nuanced reality than what we perceive.

In order to understand how people interact with images in their daily life, I first needed to understand what kind of relationship they form with visual media. For a diverse perspective and to capture a varied set of motivations, I carefully chose my users between two extreme use cases - people who never use social media platforms to someone who professionally works on social media platforms, like an influencer. Since the theme of exploration overlaps with image manipulation, I also approached researchers in ethical AI, experts in photojournalism, analog photographers, and meme maker to get a nuanced understanding of how they work with image-making. These gave me some critical insights:

Insight 1: Images are part of the content that passively supports a narrative. Even when it adds a visual dimension to a narrative, people rarely see it as an entity that adds value. This made me question the intentionality behind the presence of an image. Can we add more relevance to the picture so that it can become an active narrator of the context?

Insight 2: Still images are often seen as static entities. But as a picture travels from one device to another, they are often manipulated and change their form during their journey. This gives photos a dynamic character, which confuses people who have grown up with a single source of information like newspaper media and often need someone's help to see through the manipulation. We need tools that empower us to see the photos critically and discover new stories.

Insight 3: Still photos are two-dimensional representations of a multi-dimensional reality. People often interpret these images from their own perspectives. But when manipulated pictures challenge these perspectives, we need to look beyond the frames by capturing multiple views and opinions. How might we bring multiple perspectives into our understanding of an image?

In order to broaden my perspective and explore possible futures for the image viewing experience, I conducted 4 brainstorming sessions and 2 co-creation workshops with students from the Umea Institute of Design and the people whom I interviewed.

The workshop and brainstorming exercises resulted in 100 + ideas. I selected a few that triggered a lot of excitement during ideation and created video sketches. The sketches were one-shot videos in which I narrated the experience while enacting them through pictures and write-ups. I later gathered the responses by sharing the videos with the people I interviewed and my mentors and students at the Interaction Design program.

Most people were excited about the idea of changing the perspective of the picture and stories. This gave a glimpse of a future where the picture becomes dynamic in terms of dimension. It also made me realize that we could experience a picture beyond seeing it. I took this as a cue to explore further in this direction. The ubiquity of images irrespective of platforms also pointed to the importance of building a cross-platform tool. To focus on final concept development, I redefined my brief as:

Design a cross-platform image probing tool that helps viewers to be more informed of different realities by connecting them to multiple perspectives of an image.

I decided to explore the different ways in which a change in perspective could create a shift in narrative. Upon investigating real-life news events for inspiration, two perspective shifts inspired me:

- Secondly, the geographical change and change in time also give a different perspective to the same event. I noticed how the same pictures were giving alternate perspectives as the news travels across geography. Various researches pointing to how doctored photos of past public events can alter people's memory was an indication that the temporal aspect of perspective was also important.

To visualize the full potential of the concept, it was essential to choose a context with multiple opinions associated with it. I used the 2021 storming of the United States Capitol to make use of the abundance of photographic resources and associated narratives available on the internet. As a first step toward a tool that helps discover multiple perspectives, I came up with a design that connects multiple images and narratives into a single picture. The final design introduced a cross-platform tool that gives 3 alternate ways to discover multiple perspectives - POV, location, and time.

POV mode: In POV mode, the user can pan across the graphical area of the image to display a picture from that point in space.

Location mode: In location mode, the user can move the image to a different geographical area to explore the shift in people's opinions like tweets, social media posts, news headlines, etc.

Time mode: In time mode, the user can move the image across a timeline to see how narratives changed over time.

As a design intervention toward a media literate future, we need tools that empower the viewers to develop an informed understanding of the images they come across. The Shift aims to reimagine the future for still imagery in an interrogative way. It is a world of connected photos that forms a montage of multiple perspectives. The Shift gives access to a deeper and more nuanced reality than what we perceive.