Cimbalom Circle is a series of musical tiles that create impromptu orchestras out of pedestrian choreographies. Located near Budapest's House of Music, signed by architect Sou Fujimoto, the work pays tribute to Hungary's musical legacy. At the center of the artwork is the Cimbalom, a stringed instrument invented in Budapest in 1874. People walk a tune, play their own games, or dance, creating ever-evolving contemporary compositions with traditional sounds.

Cimbalom Circle was inaugurated in January 2022. As a key attraction of Liget Park, the artwork joined the permanent collection of currently Europe's largest urban cultural development.

Created by art and design studio Daily tous les jours, Cimbalom Circle is part of the Musical Pavement series that brings a new musical dimension to cities. These artworks live permanently in urban architecture to stimulate the emergence of new gathering habits and opportunities for a wide audience to play music together. As people play along, inhibitions are lost and spontaneous performances take place. 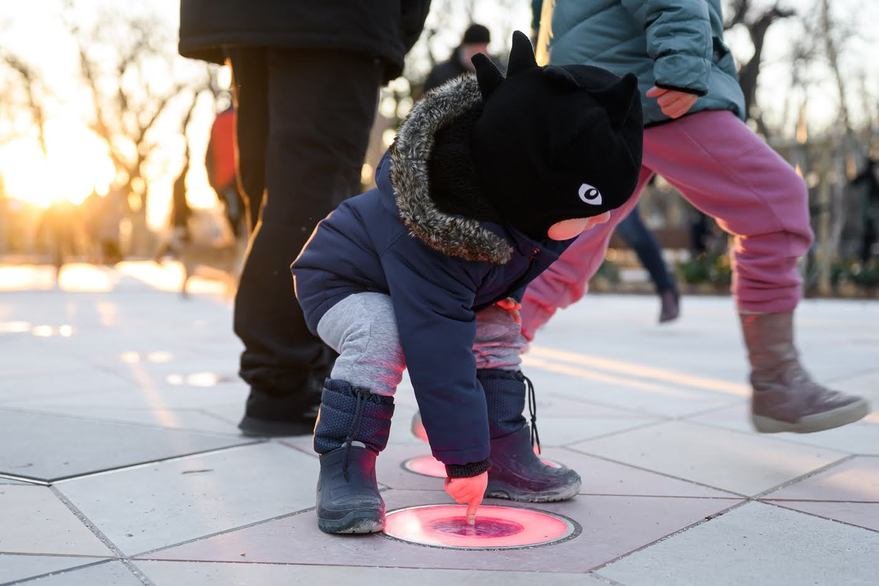 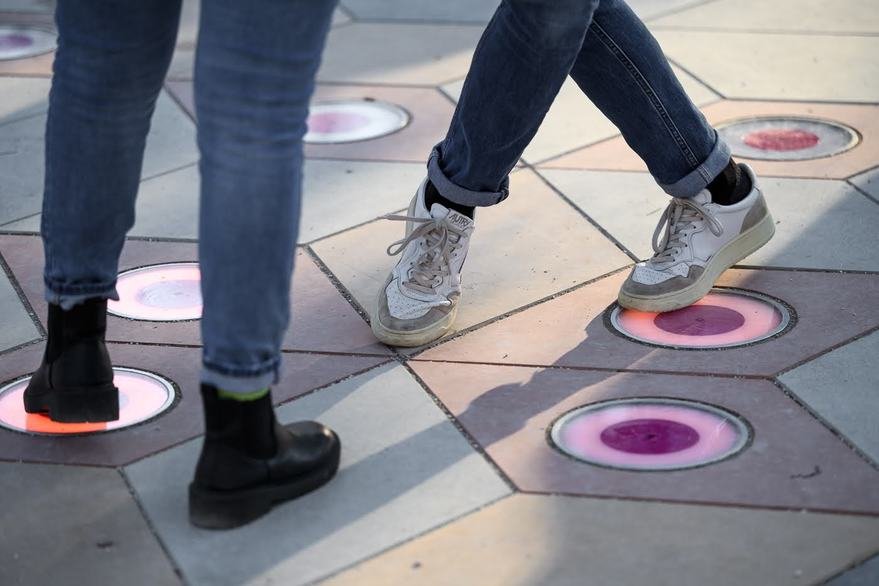 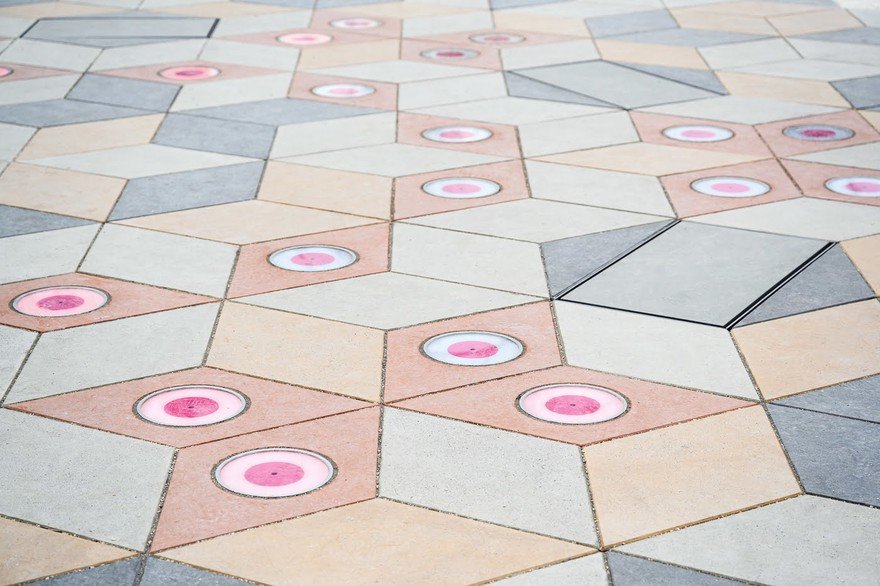 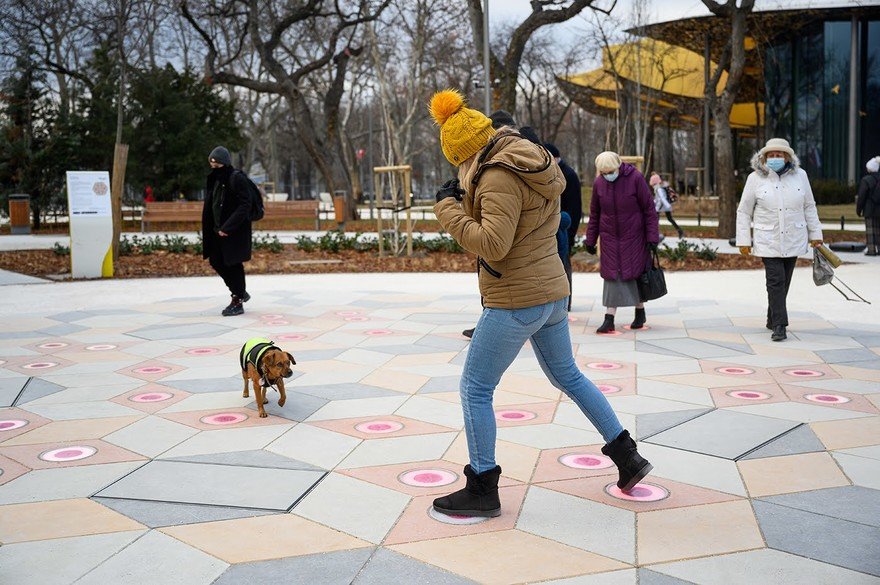 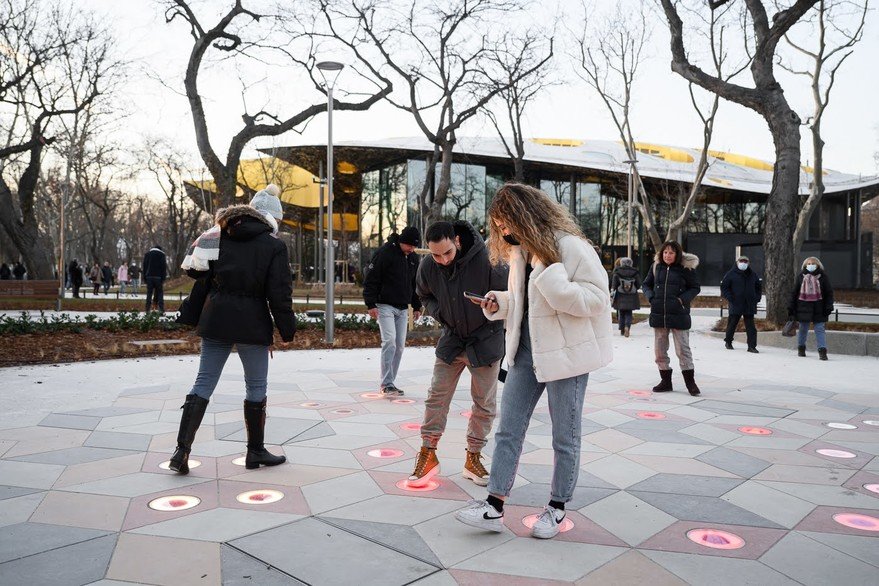 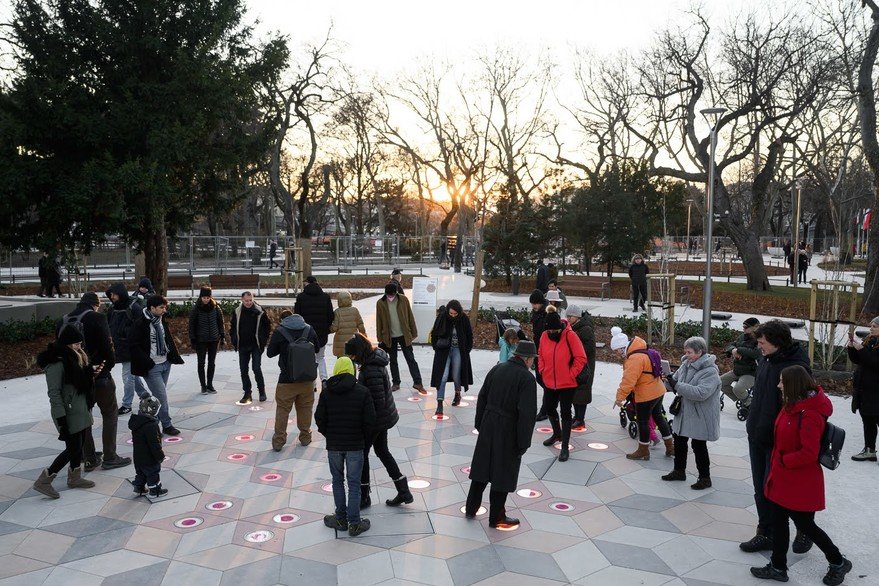 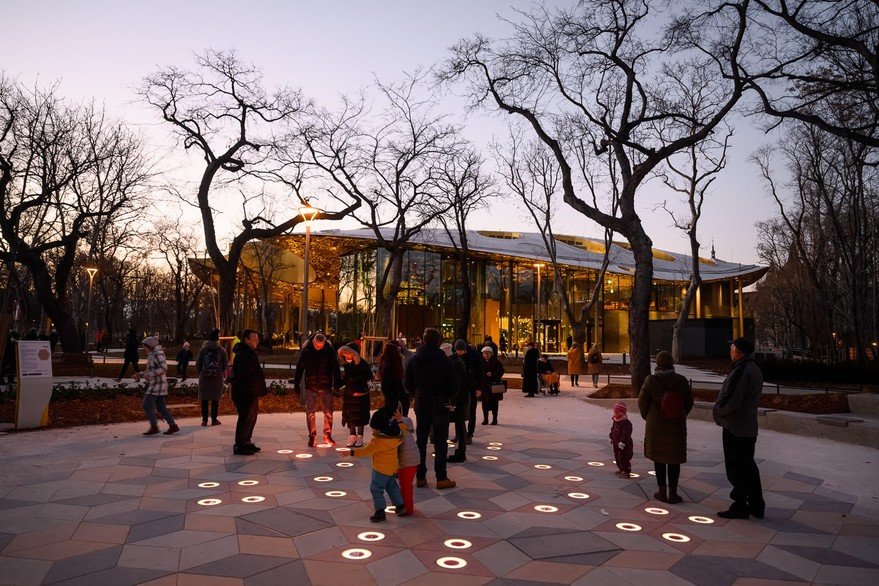 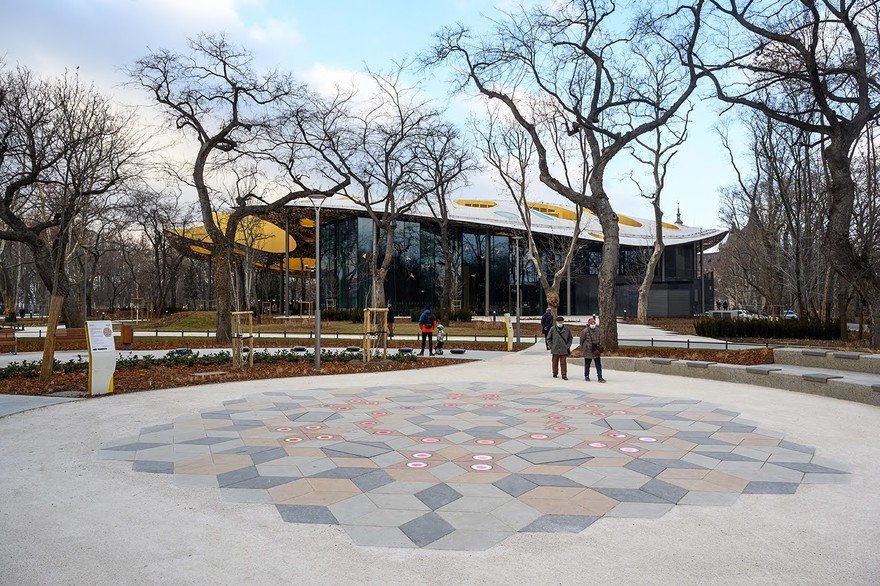 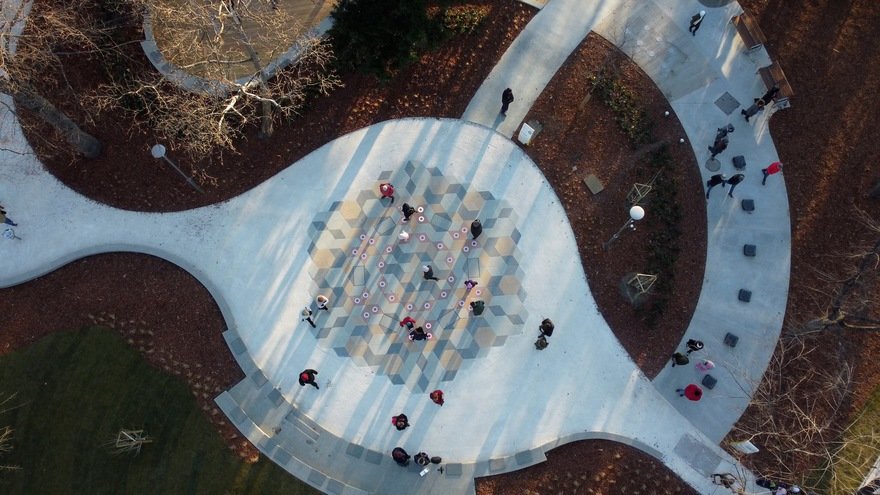 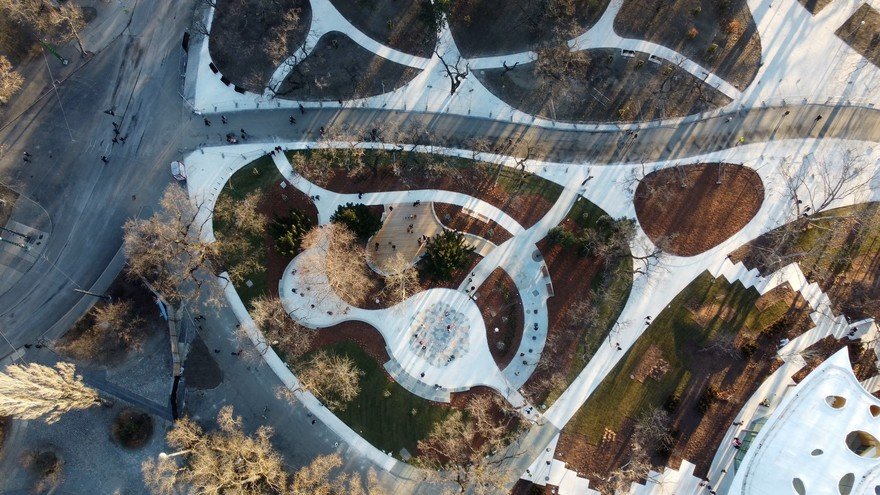 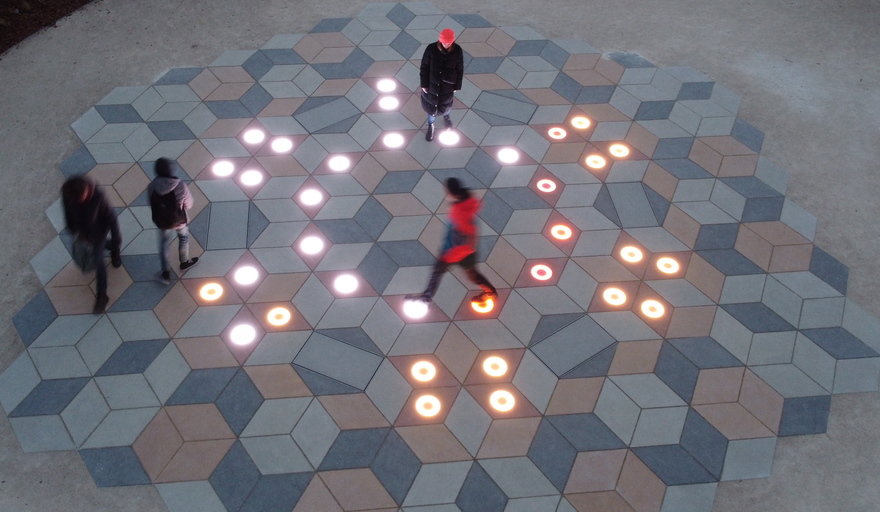 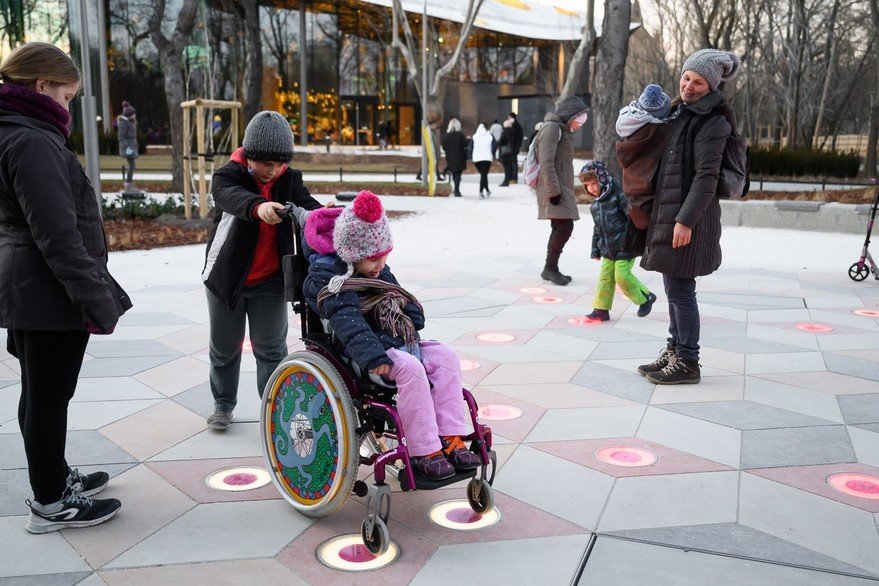 Cimbalom Circle was commissioned for Budapest's House of Music as a giant musical instrument accessible to all, encouraging ownership of space, day and night.

The artwork has 36 interactive units embedded in concrete tiles, each including a sensor and a responsive light ring. Place your foot, wheel, hand on a sensor to play a note. Tap multiple sensors to play arpeggios. Explore alone or with others to compose many melodies – the rhythms depend on the distance between the sensors played. Step on one sensor, then another, then another and create a loop, drawing patterns of music, and light, with your feet.

The sensors are arranged in clusters with dedicated speakers, allowing for a variety of interactions between participants: Play with one sensor group, while other people play other sensor groups, like a band on different instruments, or play up-close with others on the same sensor group, like a duet.

Music emanates from the ground as if by magic. The sound system comprises in-house tailored speaker tiles developed to have no visible hardware, resist outdoor conditions and blend into the pavement pattern.

This project was designed with accessibility at heart. Passers-by can walk, roll, and don't need any knowledge in music to create harmony together. Cimbalom Circle is a universal invitation to move body and mind, across barriers of cultures, languages, ages or origins.

The music intuitively created stimulates play and experimentation, inviting people to loosen inhibitions and become more aware of each other. Conversations between strangers are sparked.

Seamless integration of audio and sensor systems to urban infrastructure;

Daily tous les jours leads an emergent field of practice combining design, interactive art, storytelling, performance and placemaking to reinvent living together in the 21st century. Founded in 2010 , the Montreal-based art and design studio has presented original artworks in more than 40 cities around the world.