Traumatic experiences happen every day, causing intense frightening emotions. There is a huge need to recover and cope with the memory of these experiences, but obstructions like cost, time, guilt, and a lack of awareness hinder this progress. When untreated, triggers that evolve from the trauma begin to gradually cause an escalating negative influence, having the potential to grow into chronic mental health issues.

Cope is an application that fosters a safe space for trauma recovery by increasing self-awareness and suggesting initiative action. Utilizing a wearable AI device deemed “Copilot” or compatible smartwatch, Cope will help you track and identify when, where, and why triggers induced by trauma occur. Through Environmental Sound Recognition (ESR) and vitals documentation, when a user presses Copilot, Cope will analyze the scene in which the user was triggered. Cope will sort trigger entries by date and type of stimulus: auditory, visual, physical. The user can then input additional information or fill in missing information to help the AI system learn about the situations and reactions of the user personally. From these entries, Cope will generate suggestive coping methods based on frequent trends in the recorded data. These suggestions will increase in specificity as the user uses Copilot, and Cope will accompany the user on journeys, steps of coping methods, in an effort to overcome triggers. Additionally, Cope has the ability to sync with texts and calendars to warn users about upcoming activities and avoid negative stimulations that might offer similar triggers in the user’s history. 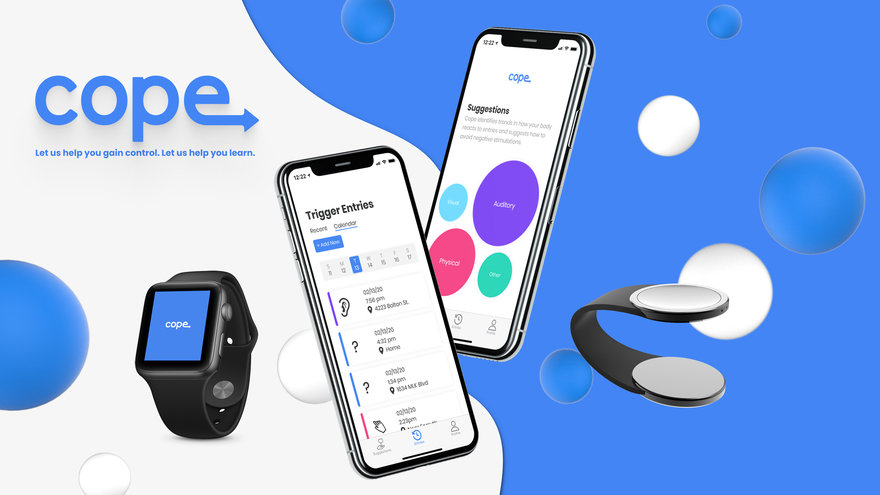 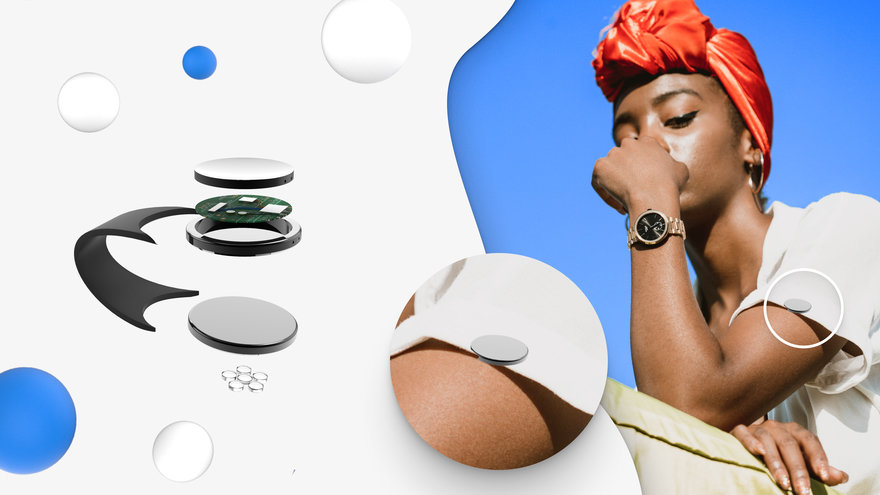 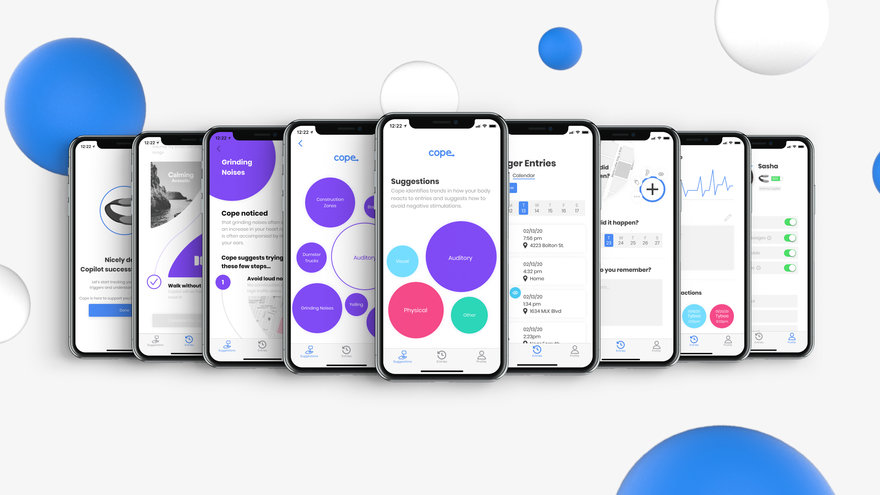 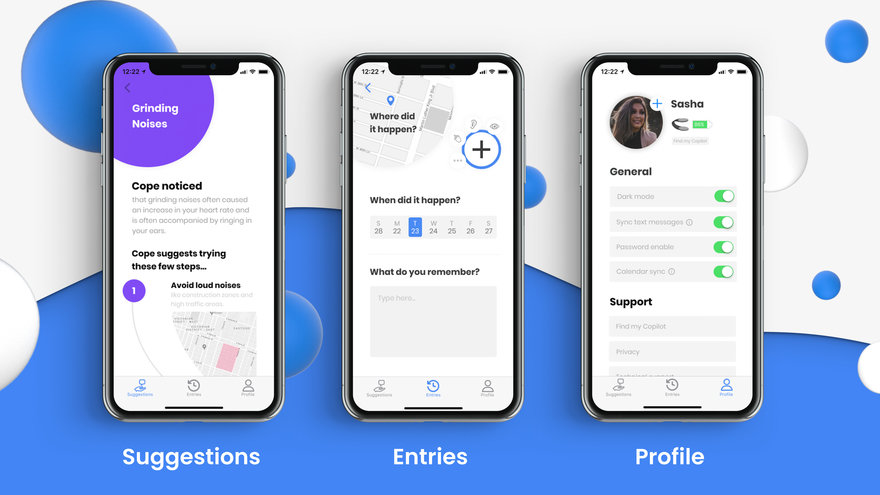 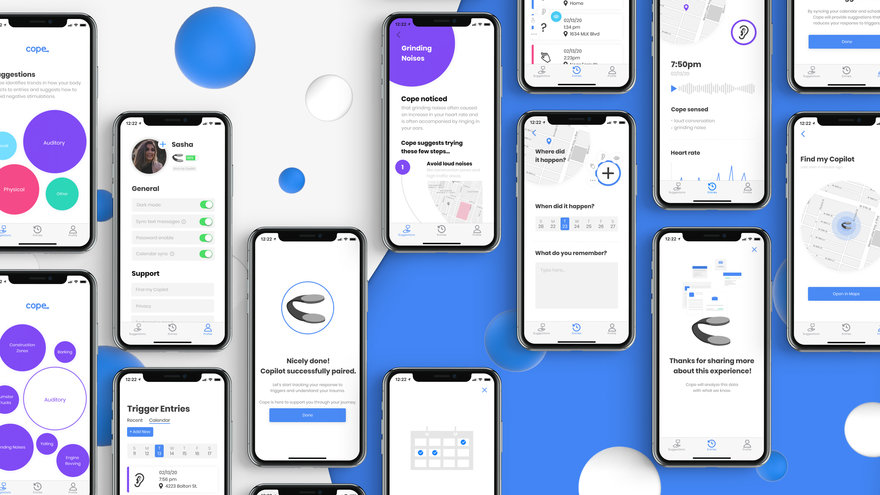 Traumatic experiences happen every day, causing intense, frightening emotions. With about 70% of adults who have experienced trauma, there is a huge need to recover and cope with the memory of these experiences, but obstructions like cost, time, guilt, and a lack of awareness hinder this progress. When untreated, triggers that evolve from the trauma begin to gradually cause an escalating negative influence, potentially growing into chronic mental health issues. Cope steps in as a safe space for those willing to ask for help recovering yet cannot move forward with medical and therapy solutions. Working with a wearable AI device deemed "Copilot" or compatible smartwatch, Cope will help you track and identify when, where, and why triggers induced by trauma occur. Through Environmental Sound Recognition (ESR) and vitals documentation, when a user presses Copilot, Cope will analyze the scene in which the user was triggered. Cope revolutionizes AI's use in a personal self-help way to bring awareness to users' triggering environments and situations. Cope allows the everyday user to start taking initial steps towards growth and healing through suggestive coping methods based on frequent trends in the recorded data gathered from the Copilot wearable. Using Cope, users can start their road to peace without allocating large sums of finances and time, turning what users deem as 'selfishness' into prioritizing emotional health. Cope is here to help.

Cope grants the users a sense of power over their triggers. Research shows that when a person endures a triggering event, some of her senses, like vision or hearing, are lost. Cope captures this data through a combination of Copilot's Environmental Sound Recognition (ESR), Global Positioning System (GPS), and heart rate monitoring to offer full awareness. Awareness unlocks education, so Cope will aggregate the user's most common trigger responses, like auditory, visual, or physical reactions, to find similarities and data trends. These trends shift into suggestive coping methods that get more specific as the user interacts with Copilot to guide the user in an effort to overcome these triggers. For instance, if a user started to panic and becomes triggered at a coffee house, upon pressing Copilot, data would be gathered. As similar events are logged, Cope would analyze the data to find that the coffee grinder noise is a recurring auditory stimulus. Cope would then suggest times that the coffee house was less busy or advise the user to bring headphones to dull the invasive sound. Cope is here to support the user during their most vulnerable times so that users can take back their control in their everyday life.

Cope is designed to be an affordable and accessible product for all who may need it. Despite the majority of the population experiencing harmful and traumatic events, very few are finding help due to varying reasons like time, money, and guilt—the design of Cope tackles all three of these inhibiting factors. Cope only needs users to press one haptic-touch button when they are experiencing a trigger. This one-step motion is a time-conscious way to gather information instead of hours spent talking or testing in offices. Additionally, Copilot costs about six dollars to produce with a market price of thirty dollars or downloaded to users' pre-existing smartwatches. Cheaper than a tank of gas, Cope alleviates the financial burden of most assistive recovery programs.

Cope steps into the lives of those affected by trauma to take premeditative action against more serious and chronic mental health issues like major depression, schizophrenia, and bipolar affective disorder. Untreated, the effects of trauma can escalate to these illnesses, becoming exponentially harder to recover from. Often, these chronic mental issues interrupt daily living activities (ADL) and interpersonal relationships with some limitations having chronically disabling symptoms. On higher scales, they may cause fateful effects and painful experiences towards society as a whole. By tackling these issues' roots in exposing users' triggers while the trauma is young, Cope is preparing the future to have less internalized turmoil and more open recovery. Preparing for the future isn't just a physical effort; Cope strives to see emotional and mental changes. Trauma will occur; it is an inevitable part of the human experience. However, Cope is here to help.

Based on user testing, the final form of the design (Copilot) is small and discrete. The device contains no lights or audible feedback, and as a result, relies on haptic feedback during the interaction. The concave form of the device's top button allows the users' finger to find it quickly and easily. The durable rubber hinge houses the wiring from the heart monitor while allowing the device to bend and adapt to whatever surface the user wishes to clasp it to. Additionally, the charging mechanism is designed to appear as a USB flash drive to continue the overall discrete nature of the design's form. Overall, the device is just a smart part of an entire ecosystem. The app's design language relies on circles and round motifs, which are mimicked in the two circular disks apparent on the device's physical design.