In an increasingly digital world, access - for everyone - to digital services is a critical need.

But as designers, we often forget about the millions of permanently, temporarily or situationally impaired people who can struggle to access our products and services.

Cards for Humanity is an online game to help designers empathise with a diverse range of people and to raise awareness of inclusive design.

Inspired by the popular – but unhelpfully exclusive – game 'Cards Against Humanity', Cards for Humanity began as a deck of cards, a collaborative workshop tool to instil behaviour change with our clients. We tested prototypes with our global studios to reach a diverse audience and used them in live projects with organisations including Google and British Gas.

With so many teams becoming remote in 2020, we built Cards for Humanity online.

To play Cards for Humanity you deal two cards, a person and a trait. Together they make a random user scenario: for example, "Aston Wall, 20, is very caring… and is blind," or "Lashanda Washam, 72, is excitable… and is not very confident when using a computer". Flipping the cards reveals further information to consider when designing for that person or trait. Swap individual cards in and out to consider the many kinds of vulnerability.

Teams can use it to test new propositions, generate ideas or audit products and services, helping organisations consider everyone's needs at every stage of the creative process and embed an inclusive mindset.

We've run Cards for Humanity workshops with practitioners from major corporates, startups and government departments, teaching them how to use it in their design process and spread the inclusive design mindset.

Cards for Humanity is more than a design tool. It's a commitment to designing better products and services which everyone can use and enjoy. 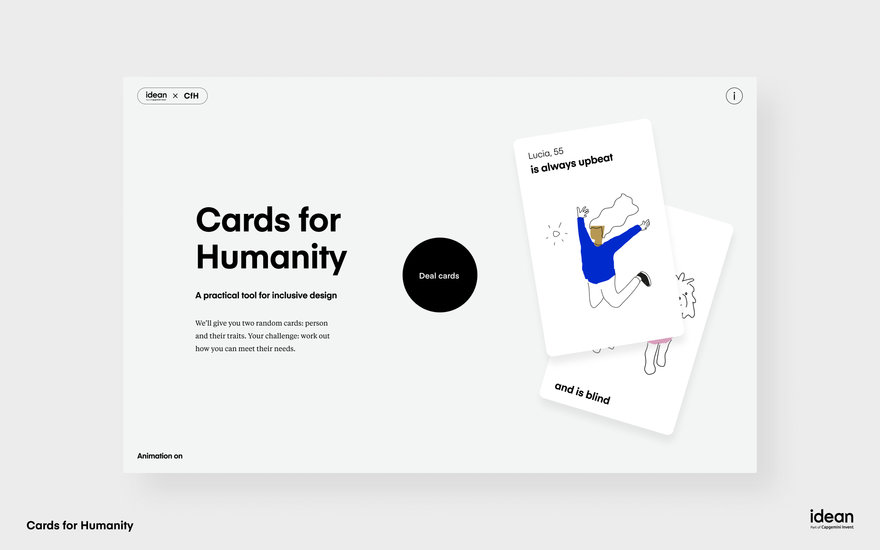 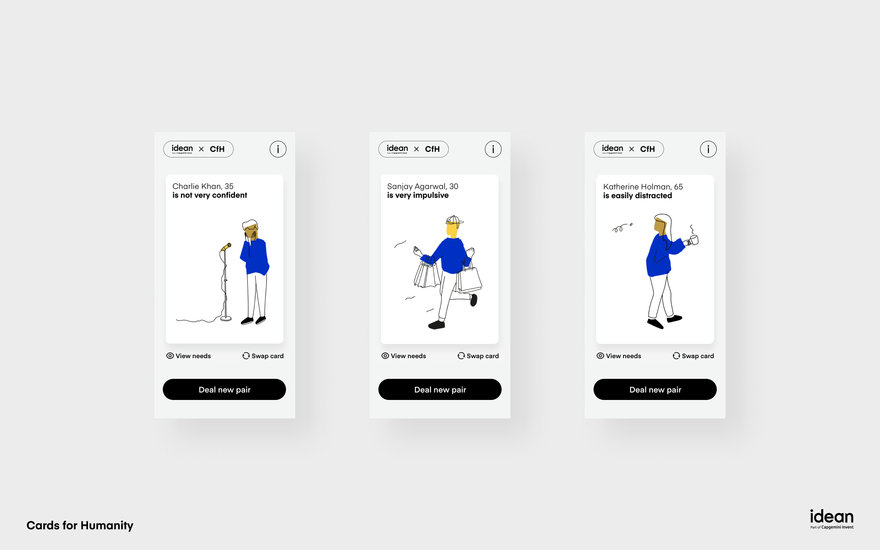 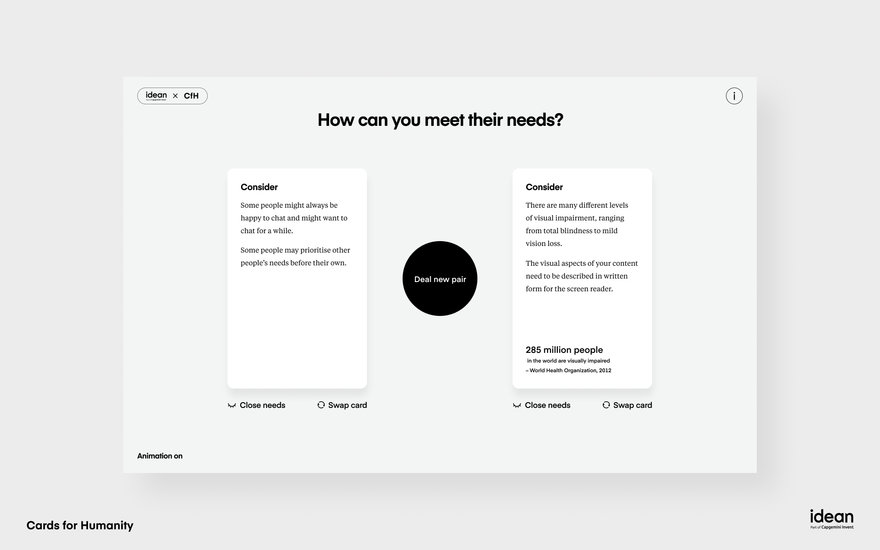 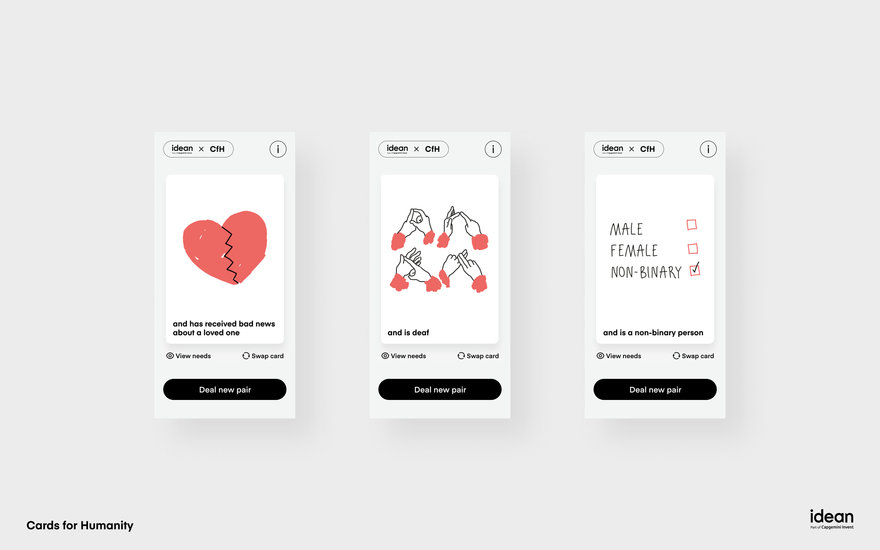 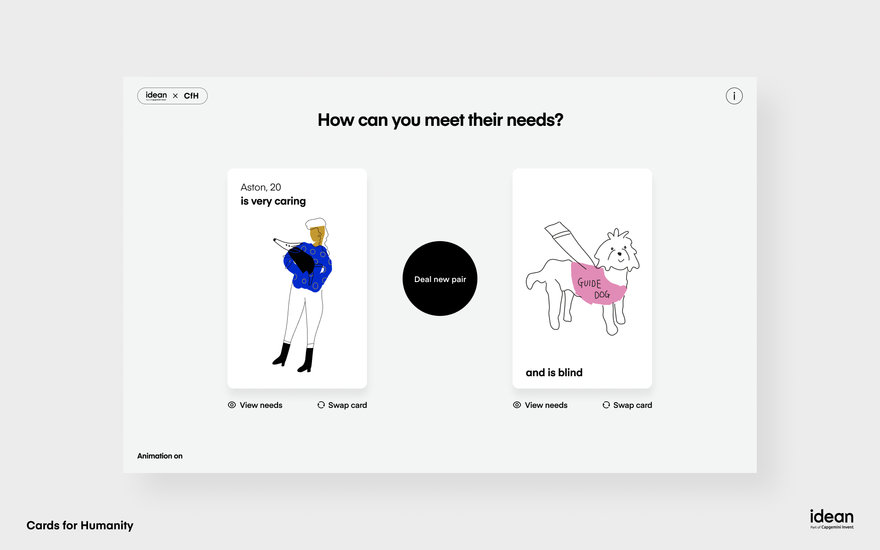 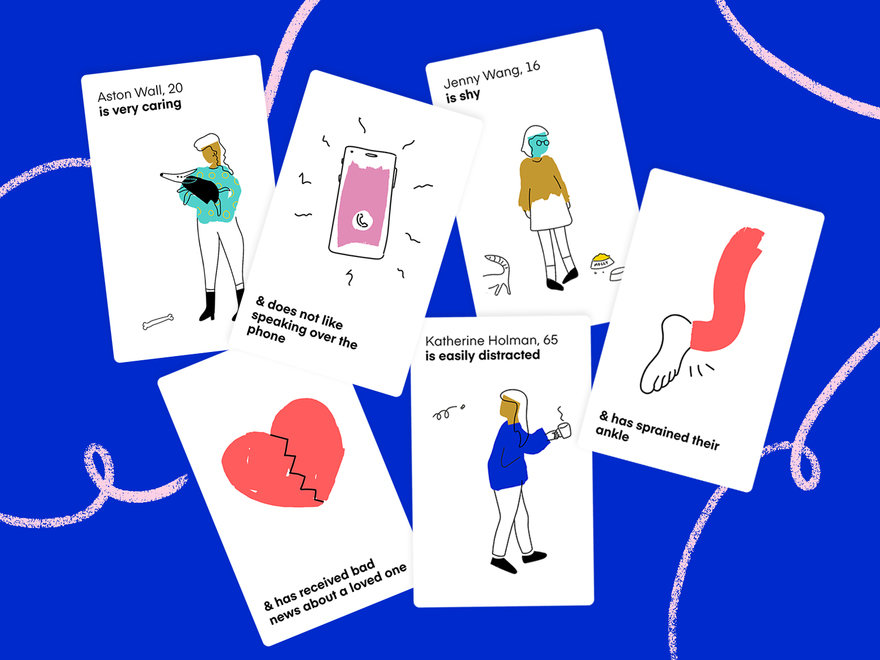 As designers and developers building and creating products, services and businesses, we see first hand that we tend to design for people with needs similar to ourselves. We use idioms and culturally-specific language. We settle for wonky voiceovers and visuals that your users can't relate to.

But we also that our population is diverse and our products and experiences need to serve people with very different needs. In the UK there are 2 million people with sight loss, 6.4 million people with dyslexia. And almost everyone will be coping with temporary impairments, such as speaking in a crowded room or having a broken leg.

At Idean, we're passionate about inclusive design. We wanted to inspire designers to consider a wider range of needs during their design process to make services and products easier for everyone to use.

Inclusive design is often seen as a 'nice-to-have' or simply a check-box exercise to meet accessibility guidelines. Speaking to organisations about designing for vulnerability, we often hear that "they're not the user group we're trying to reach" or "we don't have the budget for that".

So our brief to ourselves was: how can we inspire designers to make more inclusive design decisions, in a fun but practical way? How can we create something that easily integrates into the existing design process?

Cards for Humanity began as a deck of cards, a collaborative workshop tool to instil behaviour change. We looked at other ideation and method cards on the market for inspiration, built out the framework for the tool and conducted desk research.

The idea was to create a set of 'person' cards, along with a set of traits, to create endless random user scenarios that help designers consider a wider range of possible customers. At the end of the game, you'd collect the scenarios that would encounter difficulties with your design.

To create the 'person' cards we drew on our research to make sure we included a range of impairments and disabilities. Understanding that inclusivity extends further than physical impairments, we added more character by including personality features, for example, 'is not very independent'. We then wrote the traits, for example, is partially sighted, or has dyslexia.

We added considerations (on the back of the cards) about how to consider or design for different needs, including statistics from our desk research, to help educate our users about how important inclusive design is.

Then to make the tool genuinely inclusive and accessible to more people, we built Cards for Humanity online.

The design had to be simple. We tested prototypes with our global studios to reach a diverse audience and used them in live projects with organisations including Google and British Gas.

It went through rounds of feedback and iterations, which led us to eliminate journey steps, simplifying copy, adding a randomised pair of cards to the homepage so people can jump right in.

We also learnt from feedback that some of the colour combinations we used weren't accessible, that there was a lack of neurodiversity in the person cards, and some of the names used were seen as culturally stereotypical, giving us a chance to address it all before launching the online version.

Now Cards for Humanity is a best-in-class example of accessibility, ranking 100% on Google Lighthouse. We prioritised accessible features such as randomising cards to overcome bias and the option to turn off animation. It's accessible to screenreaders and tabbable for those with motor impairments.

Accessibility also informed the visual language. We paid special attention to colour contrasts, and we used our own brand illustrations to evoke empathy for the personalities on the cards, taking on feedback to make sure we avoided stereotyping.

We're constantly listening to feedback from our users and iterating the design - we're currently building translated versions of the site in Spanish and Swedish.

The design also had to be fun and shareable. Our creative application was founded on the real-world interactions of the original card game. We chose a motion library that mimics spring physics: cards enter the screen in a natural movement. Being mobile-first and responsive makes it perfect for use as a remote workshop tool.

It's been shared organically on social and in online communities such as BigBlueButton, Github, Workplace, Tumblr and Mural. We've presented it on the virtual stage at conferences including JAM 2020, HMRC Rescon 2020, HyperIsland and Women In Innovation 2021. It's been shared in the design press, including It's Nice That and The Drum. It's a talking point for the wider design community and organisations to think practically about inclusive design.

Cards for Humanity is more than an online game. It's a suite of tools to help create more inclusive products and experiences; a physical sets of cards, a workshop, an interactive website, and a Figma plugin.

We've run Cards for Humanity workshops with practitioners from major corporates, startups and government departments, teaching them how to use it in their design process and spread the inclusive design mindset. Cards for Humanity has initiated conversations about inclusive design with major corporations, who might have been excluding people from their products and services.

Cards for Humanity is driving change by creating long-lasting relationships with the people who can make change happen. People who are now designing better products and services which everyone can use and enjoy.