The Hyde Park Barracks, a UNESCO World Heritage Site, was the administrative hub for Britain's transportation program, moving convicts to Australia as forced labor for building the colony. Our firm was engaged to transform the Museum, weaving together various narratives including the Aboriginal experience of colonisation.

Our brief was to provide comprehensive design and documentation services for the renewal of Hyde Park Barracks Museum, in alignment with the HPBM's Interpretation Masterplan. Sydney Living Museums hoped this renewal would enable the development of a new, innovative, high quality and cost-effective interpretive experience.

Project goals included the desire to extend the museum's original interpretive foundation that established the HPBM as a creative heritage site; the telling of personal stories in ways that would allow connection to past inhabitants of the Barracks; the introduction of global context and contemporary significance to build the site's international profile; an increase in the number of accessible and engaging experiences for multiple audiences; growing visitation and interaction with the museum and site as a whole; and coordinating the design approach across all galleries to ensure a cohesive visitor experience.

In order to ensure that these goals were met, we asked ourselves two fundamental questions:, "How could we best tell the story of the Barracks through the voices of those whose lives it touched? And how could we depict the impact of the Barracks on indigenous populations?"

Our solution featured cutting-edge visitor tracking technology and an immersive audio experience to visitors as they move through the historic building. The system uses real-time positioning technology to determine a visitor's location within the space. Knowing where a visitor is, as well as their proximity to artefacts and specific exhibition elements within each gallery, enabled the production and curation of an interactive and layered audioscape. The bespoke software intelligently tracks where the visitor has been, as well as where they should go, then plays different audio based upon their specific journey. This ensured a cohesive visitor experience that maintained narrative integrity and provided wayfinding throughout two separate buildings and three floors that make up the Hyde Park Barracks Museum. 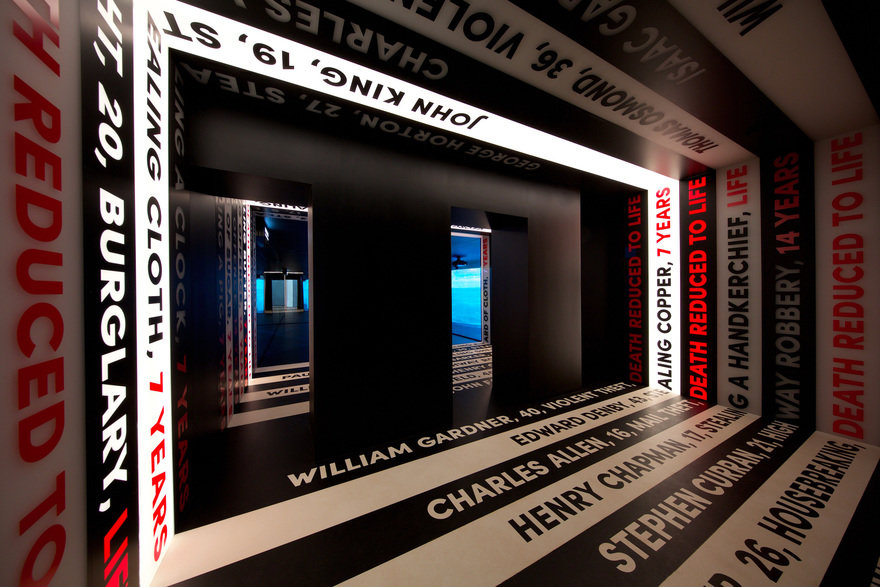 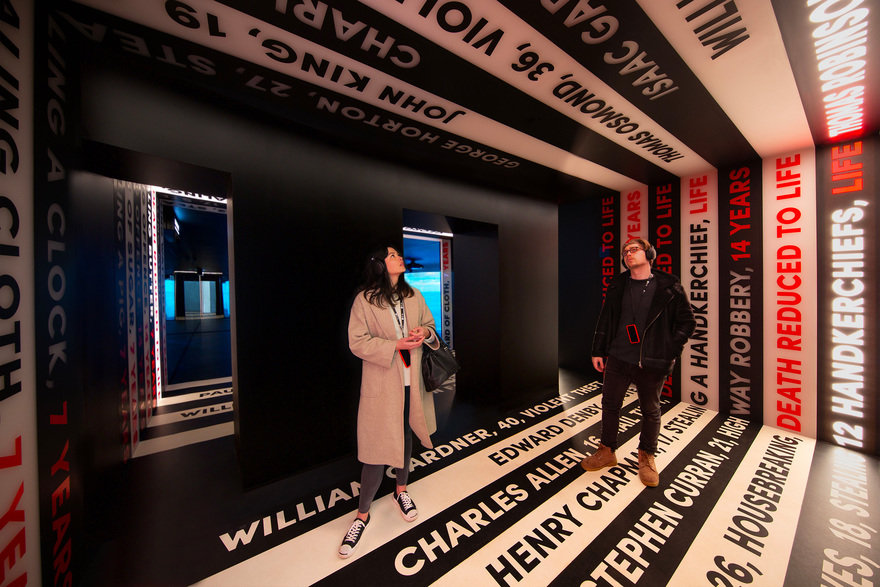 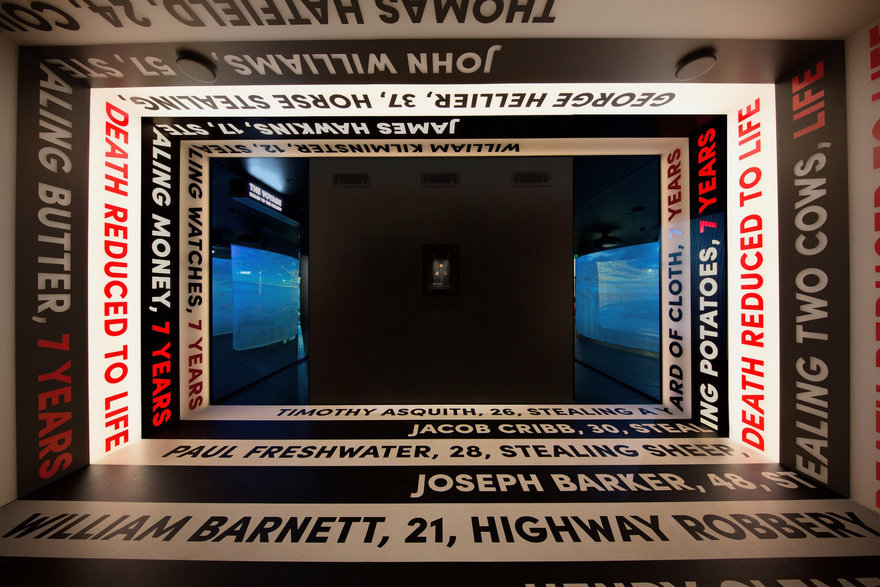 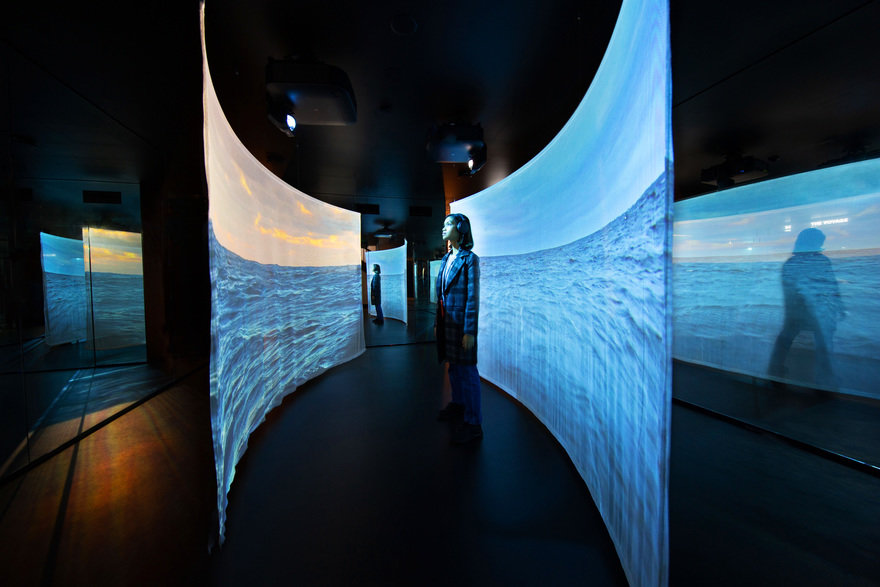 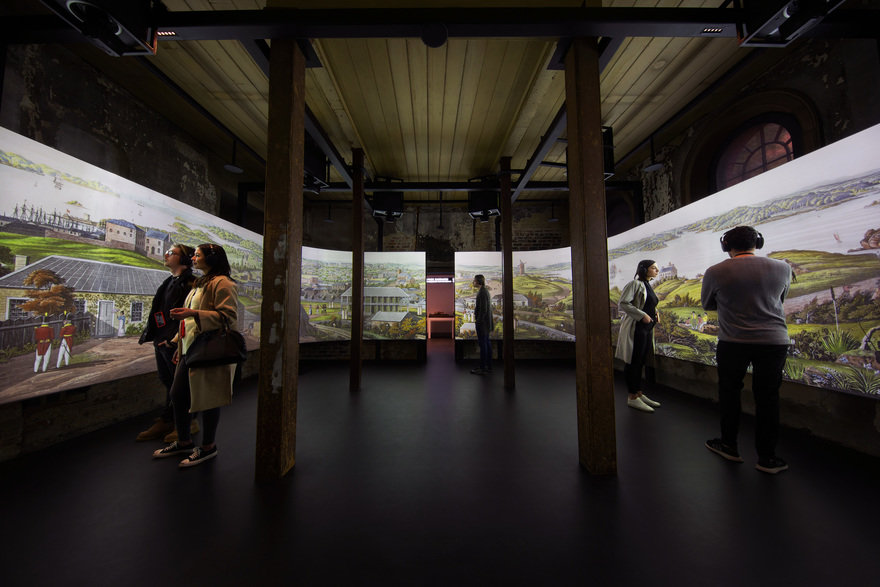 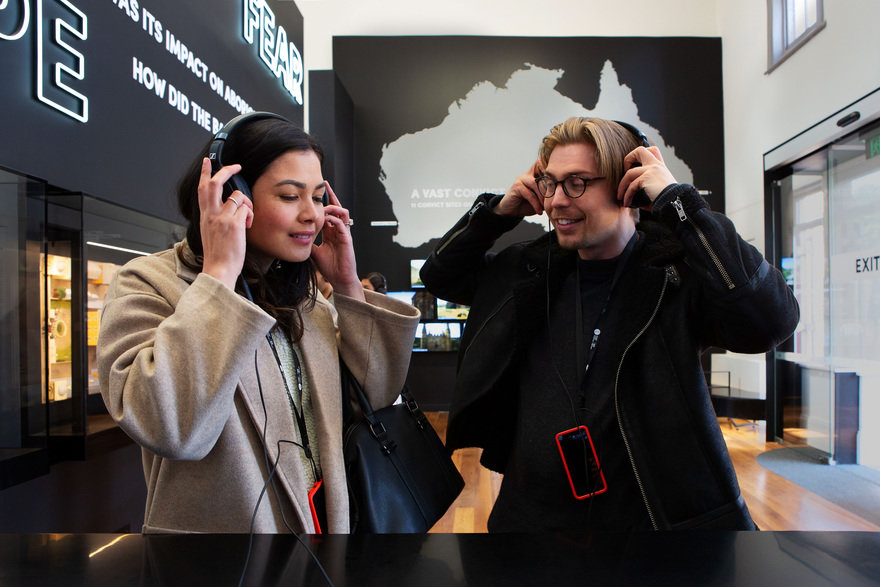 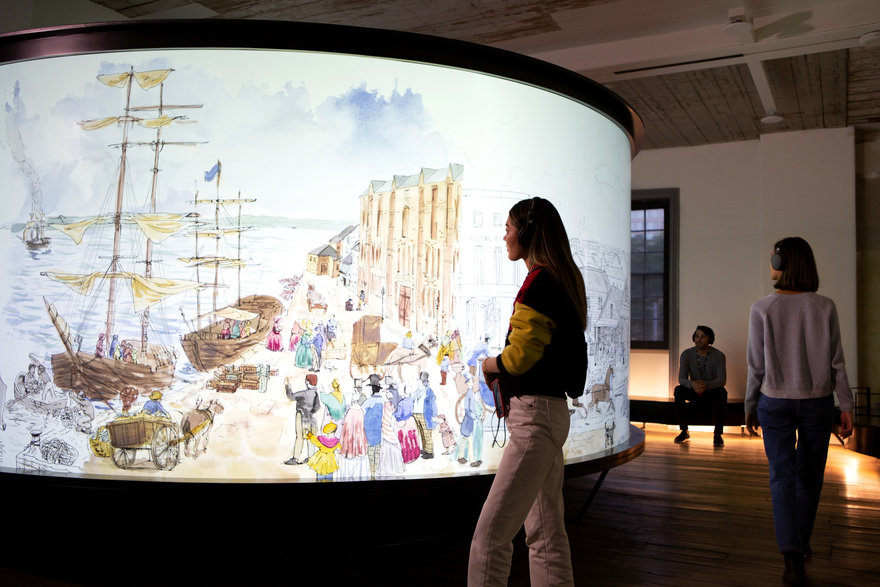 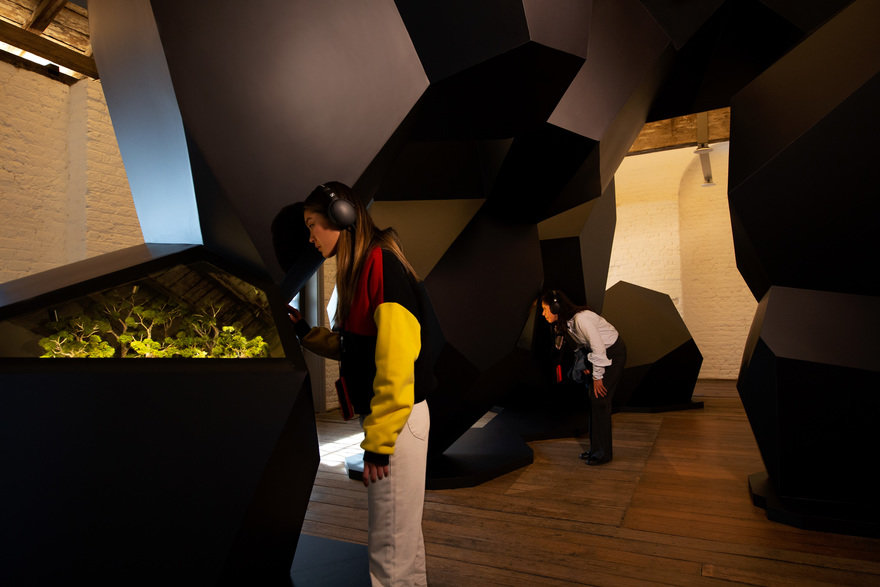 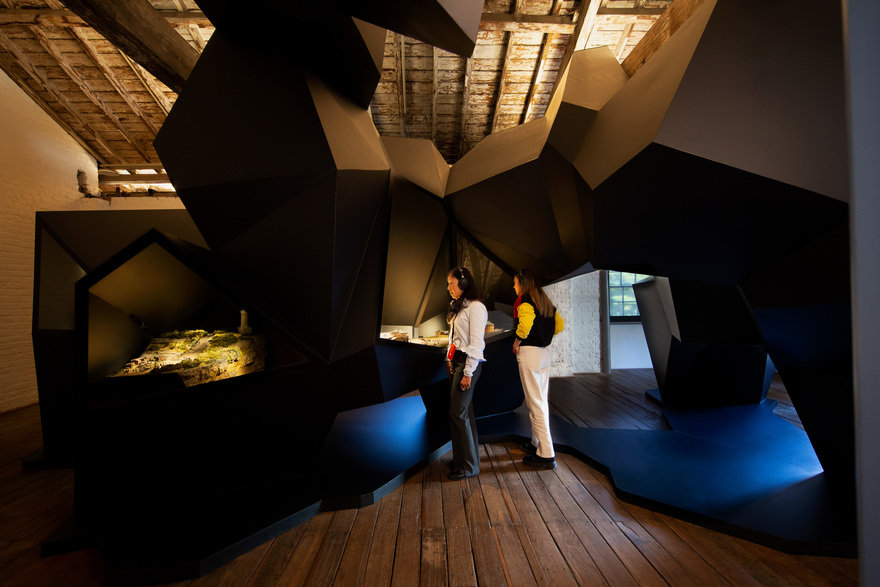 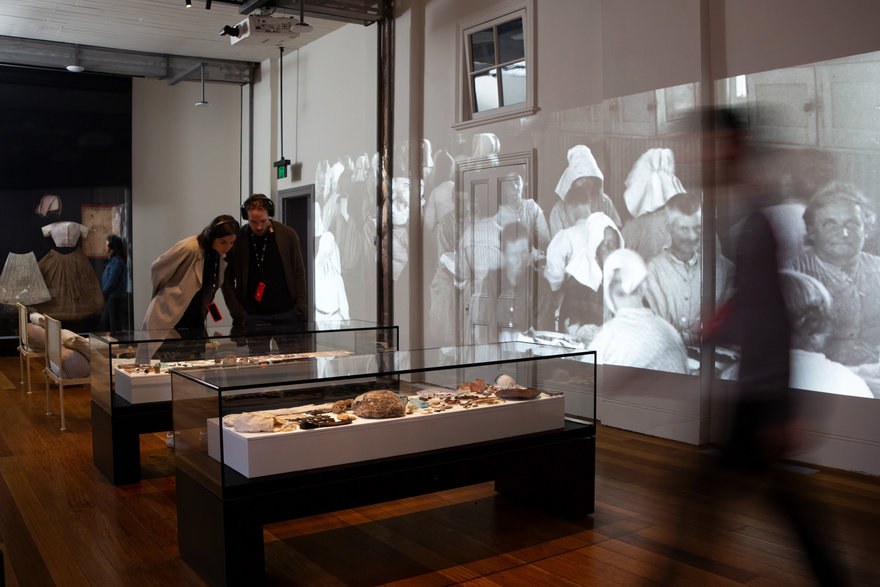 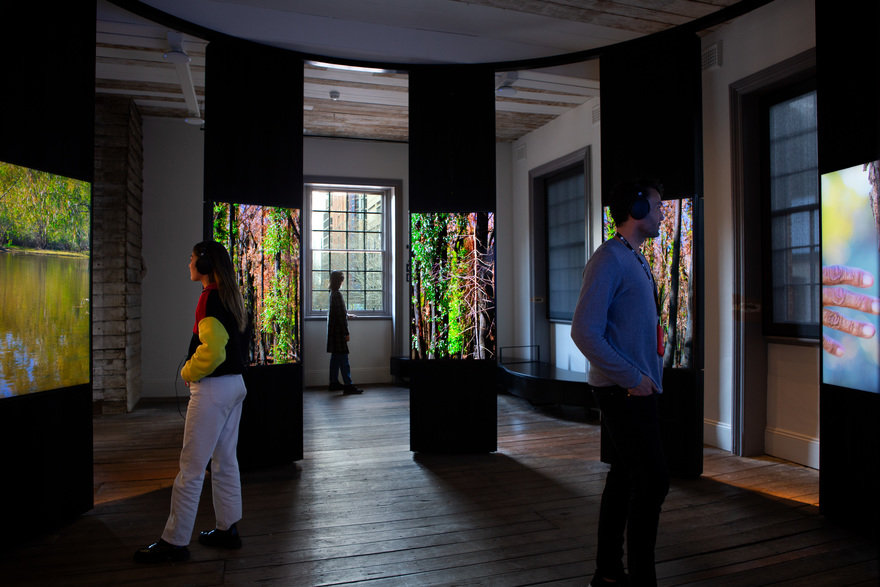 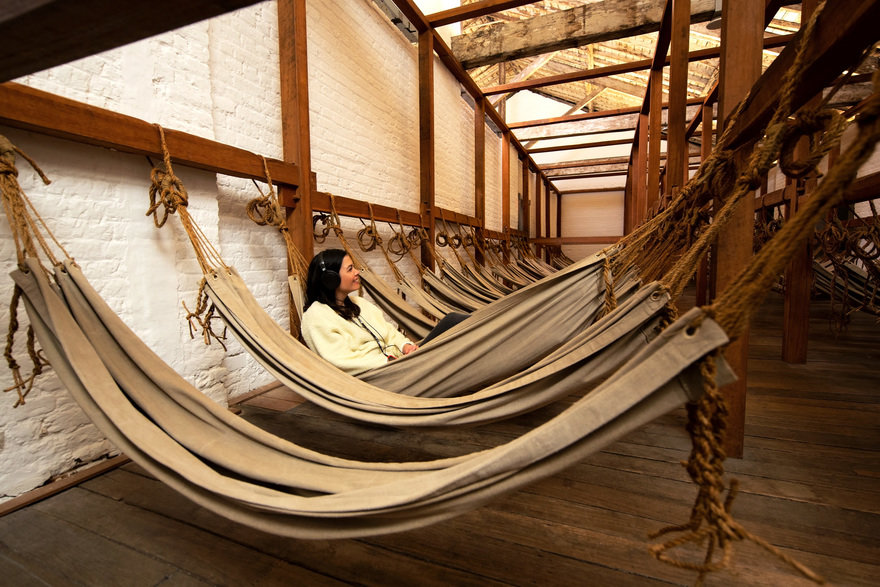 A site of exceptional significance, the Hyde Park Barracks tells the story of Australia's convict foundations and its impact on Aboriginal Australia, as well as early contributions to immigration and institutional care. It is also a UNESCO heritage site, meaning that all architectural and interior design renovations had to be conducted with the utmost care and highest of preservation standards. This included ensuring that no walls or flooring within the building were permanently altered, a design challenge our team capitalized upon in two galleries, where dramatic, free-standing forms reached across multiple rooms.

Our scope consisted of the concepting, development, and execution of 12 themed galleries across 17 rooms in two historic buildings spaces, as well as a gift shop. Phases of the original scope were as follows:

Visitors are introduced to a young convict narrator, speaking over a soundscape of his trial proceedings and conviction in an English court. In the gallery, an immersive, floor-to-ceiling graphic treatment features the names, ages, and sentences of fellow convicts. Many were, like the narrator, transported to Australia for their crimes.

A set of large projection scrims hanging in tight arrangement suggest a boat, creating an immersive space in which visitors encounter the voyage of convicts from Britain to Australia. First-person audio accounts of lost relationships and separation from home amplify the experience.

A projected panorama recreates the Sydney of 1815, where convicts made landfall after their journey. Here, a visitor's location is tracked and activates animated vignettes within the historical image, including depictions of convicts at work or at leisure, Aboriginal presence and trade, and other scenes across town.

A sculptural form spans the two southern galleries, connecting a series of dioramas that illustrate scenes of convict labour and experience while building Sydney and expanding the colony, as well as the impact of this activity on Aboriginal communities.

An exhibit that reckons with colonial Australia's past. An arrangement of nine pillars creates an open circle in the center of the gallery while a 360-degree media program acknowledges and commemorates violence perpetrated by settlers against Aboriginal people.

A semi-circular, interactive screen is triggered by visitors' presence, activating the transformation of a black and white line-drawing representing Sydney at the end of the convict era, into a lush, painterly and colorful depiction of the modernising city intent on covering up its convict past.

An array of life-size vertical screens features a rotating selection of contemporary figures recounting their thoughts about the Barracks. Pictured to scale—as if inhabiting the room themselves—and facing visitors, they reflect on the building's history: their personal or cultural connection to it; its impact on Aboriginal communities; and its ongoing legacy.

The Hyde Park Barracks Museum successfully tapped the broader community to integrate multiple perspectives into the museum's narrative, including incorporation of Aboriginal/ stories. Previously, the museum explored the experience of the convict population in-depth but did not fully acknowledge the site's role as an agent of colonial change. Together with our client, the team set out to tell a more complete story of the UNESCO World Heritage site, its role in the transportation and administration of convicts in Australia,, and the impact of this colonial program on Aboriginal Australia.

This narrative was delivered through a unique approach that centered on the idea that 'unless emotion is present, there is no learning.' In order for visitors to truly understand the complex history and heritage of the site, traditional exhibit approaches alone would not suffice. Using state-of-the-art bluetooth audio technology and visitor tracking software, we placed individual voices and stories at the heart of the exhibits. As visitors move through physical installations and artifacts, they trigger audio of first-hand accounts retold by voice actors and descendants of those who lived in and were affected by the Barracks. In this way, visitors are offered multiple perspectives and contemporary connections as opposed to a singular narrative.

We also brought to life one of Australia's most important archaeological collections. Displaying over 4000 original artefacts, many found underneath the Barracks' floorboards or between joists, the exhibition provides a direct link to items worn, touched and treasured by past residents – including an intact convict shirt and leather shoe, some of the world's few remaining examples of convict life. It is a rare opportunity to get up close and personal with Australia's past.