This is an interactive immersive installation design based on emotion visualization. It aims to develop immersive interactive space that can communicate our real-time emotional state. This will not only help us in becoming more self-aware but also reflect on our affective state.

"Have you seen yourself a minute ago?" This is a slow self-examination experience. Each viewer can see the particle landscape constructed by himself and his emotions at the same time. Every tiny emotional change will be recorded by the moving particles , just like a frame of a movie. This depiction and reproduction of emotions keeps us away from our own subjective experience and encourages us to think rationally when narrating what happened to us. The designer create a kind of "imaginary rationality" for our own feelings, aesthetic experience and moral practice in order to understand them.

The audience will experience not only the emotion at the moment, but more importantly, through the interaction of facial expressions, to achieve psychological repair. This work was implemented in the community of Wuhan, hoping to repair people who were psychologically affected by the epidemic.

Emo proposes the system of facial recognition and emotion classification based on the tri-dimensional theory of feelings of psychologist Wilhelm Wundt, which also includes the hardware system and the virtual visualization environment. It is argued that the proposed system not only explores an application of facial expression recognition in immersive spaces, but also carries out psychological intervention in the post-epidemic period, thereby constructing a public work of art with social awareness and responsibility.

This work was selected for 10th Anniversary Shanghai City of Design Exhibition and New Horizons Young Designers Exhibition in Zhuhai. Xiying was also invited as a feature lecturer to share this project at 'Human to Human' forum of Suzhou Design Week. 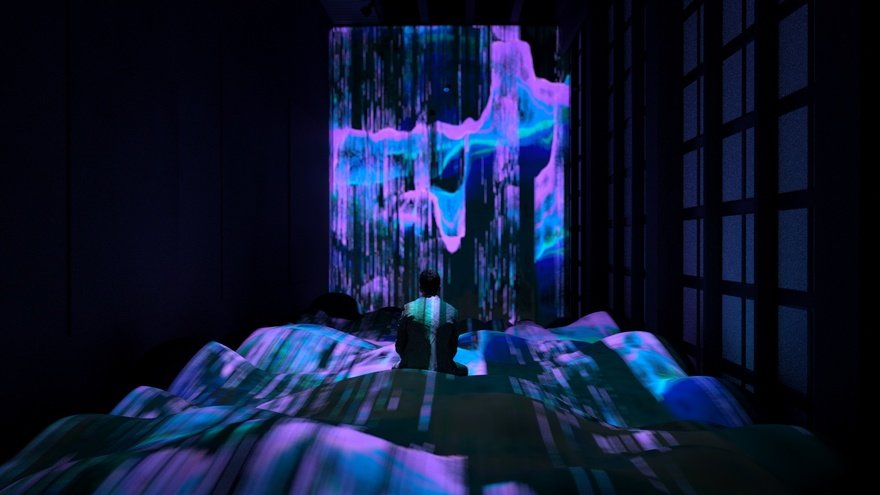 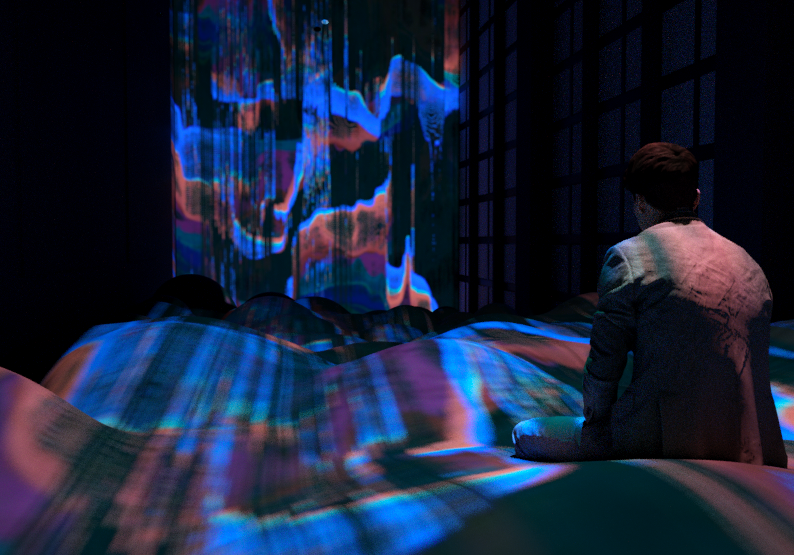 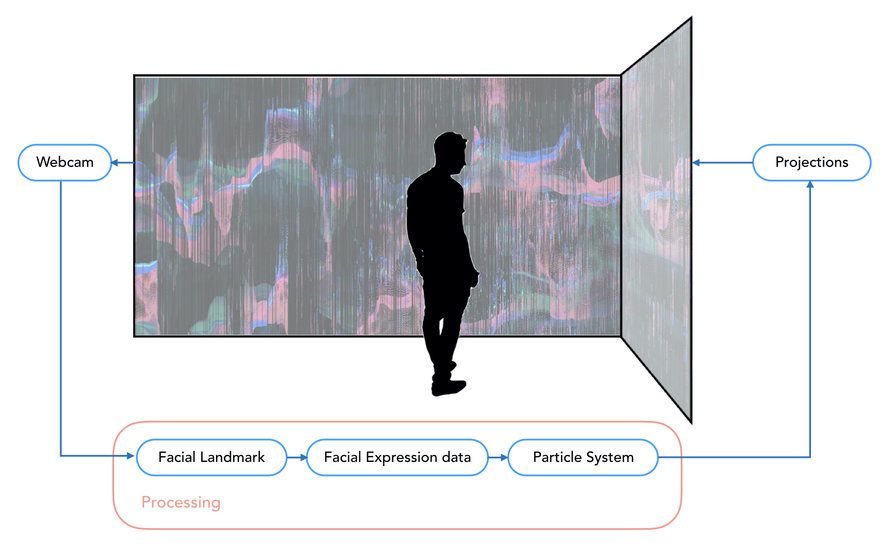 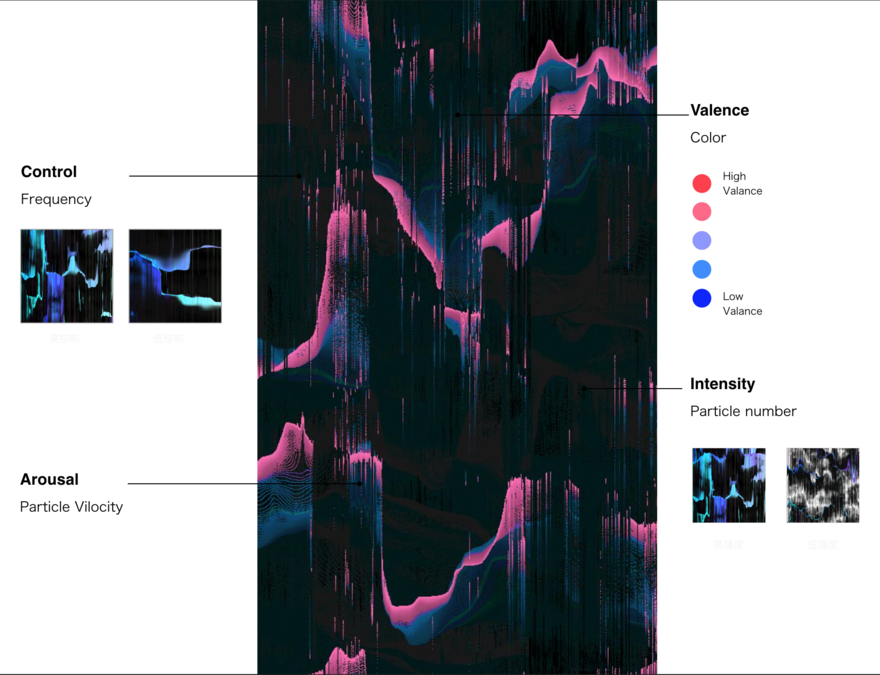 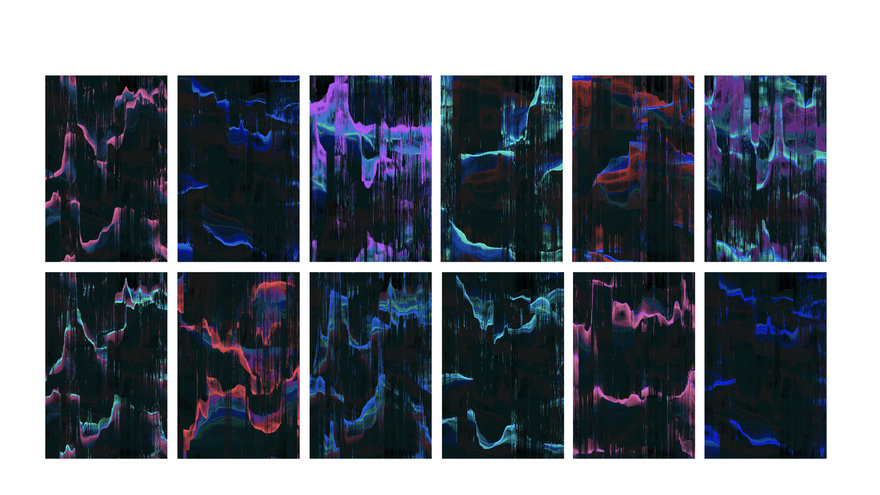 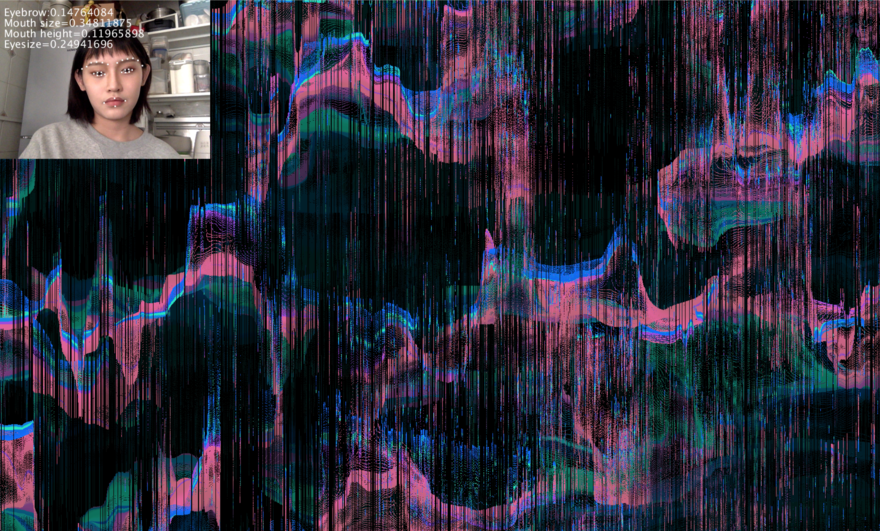 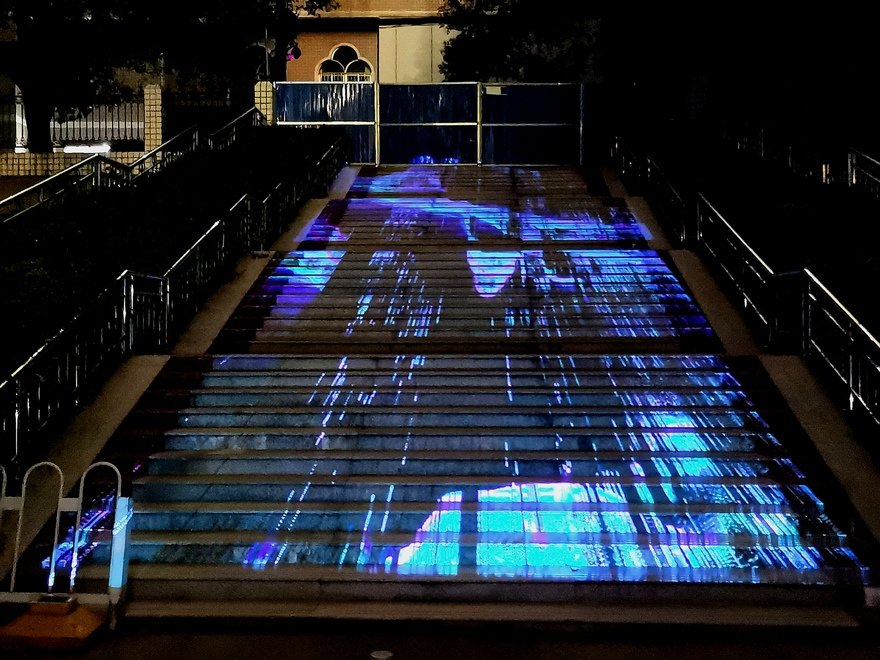 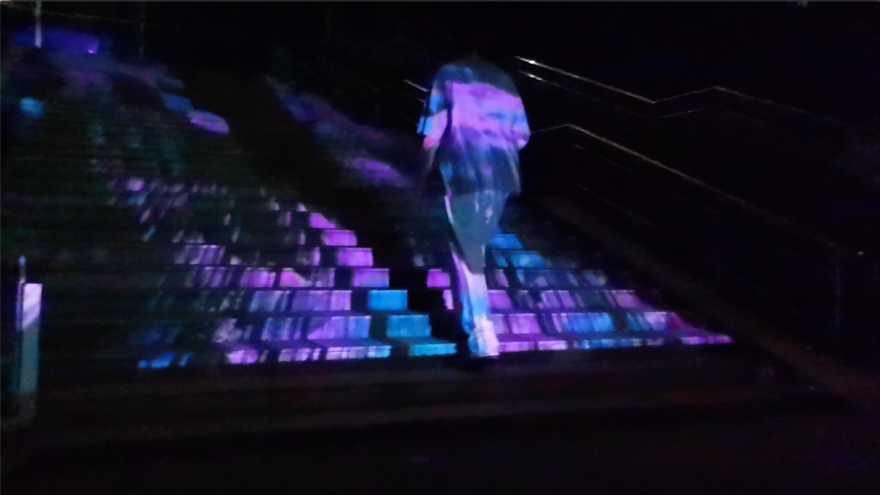 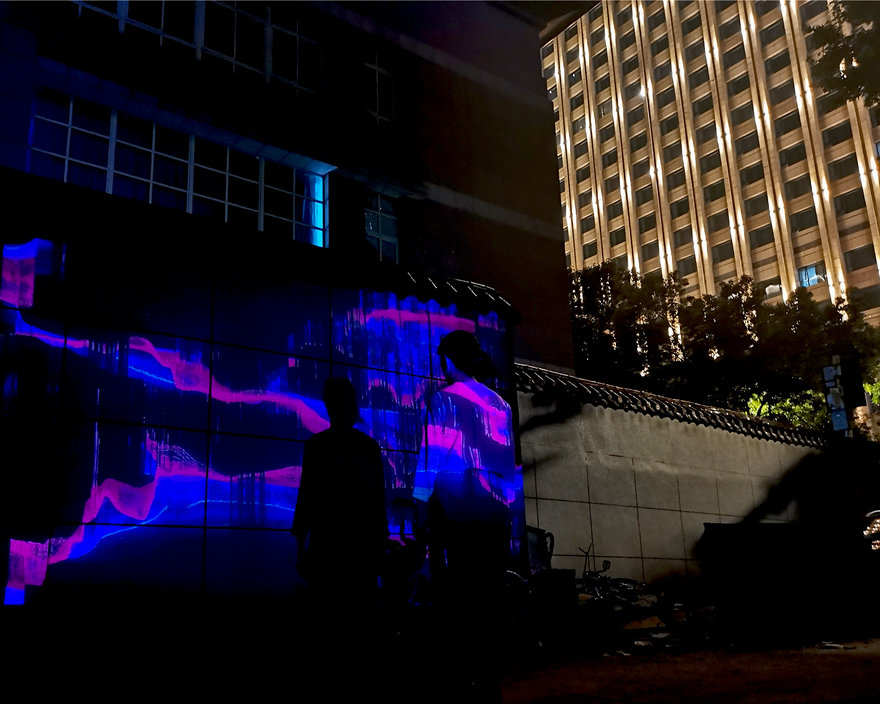 Implementation at the alley of a community in Wuhan Xiying Bao

Emotions are biological states related to a system brought on by neurophysiological changes that are variously related to thoughts, feelings, behavioral responses, and a degree of delight or displeasure (Cabanac, 2002). The characteristic quality of emotional phenomena is that, unmistakably, we distinguish ourselves and the external world and refer the emotions to our selves, that is, to our state of being.

The modern concept of emotion was proposed in the 19th century by Wilhelm Wundt, who made pioneering contributions to the emerging science of psychology. In Wundt's tri-dimensional theory of feeling (Wassmann, 2009), feelings can vary along three dimensions: pleasure–displeasure (valence), excitement–calm (control), and tension–relaxation (intensity). These feelings and sensations can be clustered together in components from an apperceptive mass.

Living in a modern city, surrounded by a cold and hard surface, we can survive without always paying attention to our emotions and bodies. Because of this, we tend to ignore the existence of our bodies and emotions. Originally, the straight line did not exist in natural forests. The aim of this installation is to recall our awareness and perception of emotion through the experience and in the newly realized social potentials of the participant. As Gaudi observed, "The straight line belongs to Man. The curved line belongs to God." We are accustomed to being in man-made objects filled with planes and straight lines and surviving. Because of this, we have forgotten the nature of emotions that are as "fluid" as natural objects. Emo restores the rugged road in mountains and rivers. Such spatial feedback brings emotional influence to the participants, and this change in turn triggers another level of turbulence in the particle landscape. The relationship between humans, emotions, and space can be interpreted in this subtle cycle.

As participants enter the installation, their facial expressions are tracked by a webcam, which transforms their emotion into waterfall-like particles on the projection screens. The landscape-shaped soft installation on the ground is made of foam particles and cloth, which symbolizes the uneven ground in a natural forest. It allows the participants' bodies to sink into the soft fabric. The particles triggered by the expression of the viewer flow down, and as the mood of the participant changes, the number, color, and velocity of the particle landscape transform accordingly. Here, the transformation inside the space at any moment will be determined by the movement of the participants inside and the interaction between human and space, attaching the space to the dynamic body. Emo invites participants to engage in expressive mood and subtle interactions with one another that are made socially acceptable in the context of the installation. It not only shows the common dedication to connection but also a process of global communication.

Emo capitalizes on this flow of emotion to align participants' inner states by aligning their physical states and giving rise to an intersubjective experience. As installation artist Nathaniel Stern claims, interactive artwork reframes the body's movement, thoughts, and sensations: "Interaction is a limitation, but it is also an amplification. At its limits, interactive art disrupts our relational embodiment and thus attunes us to its potentials" (Stern, 2013). In Emo, certain social elements are hidden or subdued, amplifying others. The inner world is altered and the gaze of others is hidden, removing visual indicators typically used to discriminate and replace them with a unifying aesthetic intended to transcend physical boundaries. Through this imagery, Emo reconstructs an objective emotion from the participant's inside, allowing their gaze and examination, freeing them from their subjective cognition boundaries.

Emotional bonds in the context of the epidemic

Emotional well-being and coping during COVID-19 has been the paramount social challenge. Fear and anxiety of the new disease and the feeling of uncertainty are often overwhelming and cause negative reactions in adults and youngsters. Public health actions, such as social distancing, can make people feel isolated and lonely and may increase stress and anxiety. The author has resided in Wuhan since the outbreak of COVID-19 and had a profound experience of mixed feelings. Two physical installations were implemented in different forms and spaces in Wuhan.

In the first use case, the installation was implemented in an alley leading to a community in Wuhan. At this time, the gate of the Wuhan community was still locked, but the city was slowly waking up, just like the city lights in the distance . The equipment used in the installation includes a projector, a tripod, and a webcam. MadMapper was used to realize the mapping work of the projection onto the wall. Emo was experienced by 12 passing residents, who engaged in the interaction process. We observed attendees approach Emo with active curiosity, exploring the facial expression interaction offered by the installation. (Because of social distancing rules during the COVID-19 lockdown, Emo was experienced by only one participant at a time.)

In the second use case, the implementation site was located on a locked-down staircase. The passageway, which usually is constantly crowded, had now become extremely quiet. Participants' emotional landscape, combined with the special scenarios brought about by the epidemic context, enhanced this project with richer semantics. The particle landscape projected onto the stairs poured down the stairs like a water stream, echoing the visual theme of the emotional landscape in form. This constructed a context-aware rendering schema that revealed new interactive and visual possibilities. In the corner of this city, Emo recorded and portrayed the emotions of Wuhan, establishing the emotion as a site of social exchange. The aim of using this staircase was to connect and build communities, and connect each other through emotions, which are common attributes of Homo sapiens. As an interactive immersive installation located in public space, this work was designed to allow for connections to evolve across communities and cities, connecting humans within these realms together, especially in the COVID-19 context.

Emo is a prototypical social structure that forms a template for what immersive art in public space in a pandemic context could look like. To understand the social effects of Emo and the ways it brings psychological intervention and human connection, observations of participants' interactions with the system are described below.

Media as an extension of sensation

The raised awareness of emotion demonstrated that the context of the installation transcended the boundaries of human bodies, extending the emotion to a tangible larger scale. Immersed in the digital landscape constructed by self, many participants claimed that they were moved by this aesthetic representation of their inner world, which tends to be underrated in everyday life. This experience felt like a holy reunion of the mind and body. At the same time, the installation created a media that bears the extension of sensation on a community scale, or even a city scale. It provided a platform for human emotion to merge, connect, and produce dialogues.

Indications of emotional interactions were observed as participants played with their facial expressions to see how the particle landscape would respond. Many participants expressed that this work provided a new perspective on how we could rationally observe and perceive our emotions. This depiction and reproduction of emotions removes us from our own subjective experience and encourages us to think rationally when narrating what has happened to us. This work creates a kind of "imaginary rationality" for our own feelings, aesthetic experience, and moral practice in order to understand them. The participants had experienced a long-term lockdown, then had the opportunity to peel off, deconstruct, objectify, and eventually have conversations with their own emotions.

The abstract particle landscape was designed to provide participants with an integrated aesthetic to encourage a sense of collective identity. On several occasions, some participants were observed from afar, carefully staying outside the tracked space. They then stepped toward the projection with curiosity. After the experience, they appeared to linger from afar and observe others' emotional landscape again. This roundabout journey brought them a new perspective of understanding of, not only their own selves, but more importantly, the selves of others. This unifying aesthetic broke the boundaries of personal subjective recognition and served as a bridge for participants' understanding. Especially in the pandemic period, participants were spiritually connected through mutual experience and empathy construction in the particle landscape.