Vald is a wearable rescue supply that gives miners 24 hours of oxygen when they get stuck underground. It reconsiders breathing tools and offers a longer lasting oxygen source by using different materials and a working principle.

If there is an explosion in an underground mine, it generates carbon monoxide (CO), which kills people instantly. Due to the unstable nature of the underground mines, they tend to collapse with the force of an explosion that trap miners. In such cases, miners have an hour's worth of oxygen in their supply and are destined to die before rescue team arrives. Vald rescues miners that are in this situation.

Most of the explosions in mines happen due to methane accumulation. There are two solutions to stay alive in such cases. If miners are closer to the exit, they are supposed wear their oxygen pack that supplies an hour of oxygen and run away as fast as they can until they escape the mine. However, if they are hundreds of meters below the ground and not close to the exit, their only chance of staying alive, is going to a refuge chamber, which is a sealed safe haven that supplies 4 days of oxygen, water and electricity. Mines are very unstable. Even without an explosion, ceilings always fall on people. With the force of an explosion, most parts of the mine collapses. This means, you are stuck and not able to go to either the exit or the refuge chamber. Unfortunately, the rescue team cannot go inside a mine right after an explosion. They have to seal the entrance off because if they let more oxygen inside, the fire will keep burning. After the fire dies down, they are able to go inside and rescue the miners, which usually takes up to 12-16 hours. This is the situation that killed 12 miners in 2006 in Utah, 29 miners in 2010 in West Virginia and finally, 301 people in Turkey last summer.

Rather than locating oxygen in a stationary unit and expecting miners to reach it, the solution is to provide enough oxygen immediately for miners. To make that happen, Vald offers a different way to supply oxygen for longer hours within a limited amount of space, and with a portable amount of weight. Additionally, it helps miners to carry this supply in a more comfortable way. The solution was inspired by looking at certain environments, where limited amounts of oxygen needed to be used and recycled, such as the International Space Station (ISS).

Vald is unique because there is no implemented product in the market that can give miners enough oxygen to stay alive, no matter where in the mine they are. 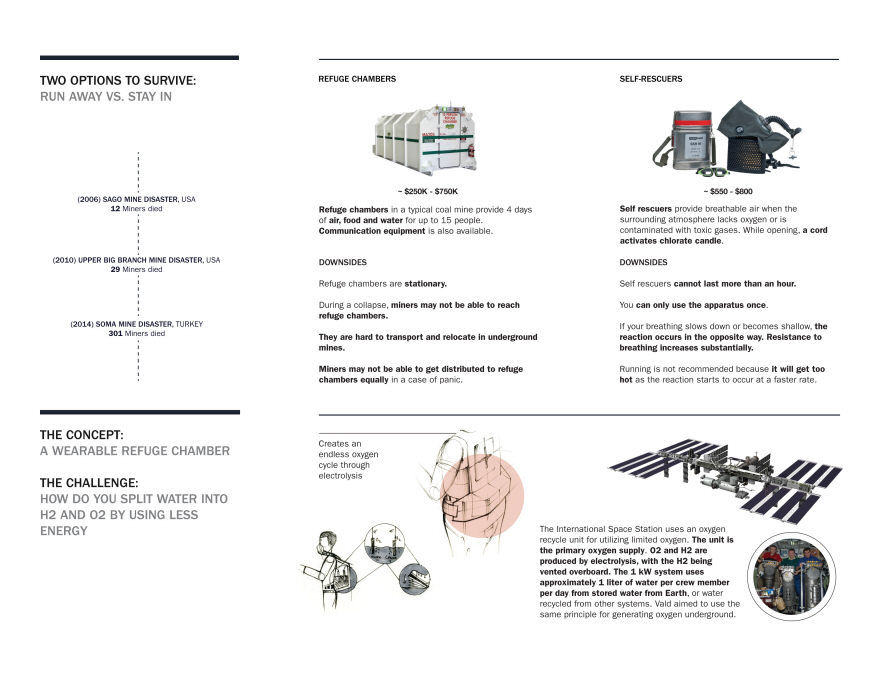 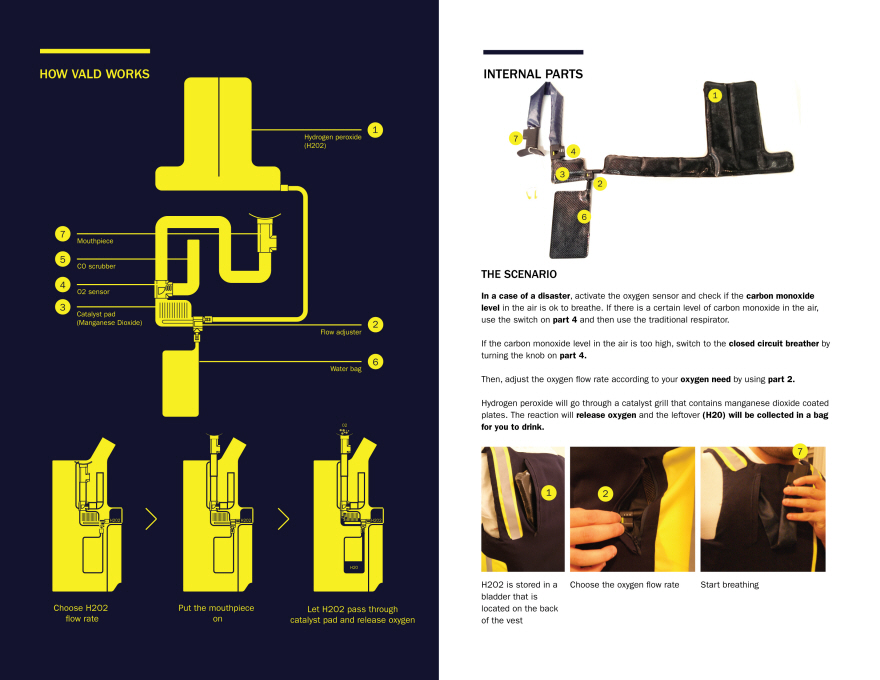 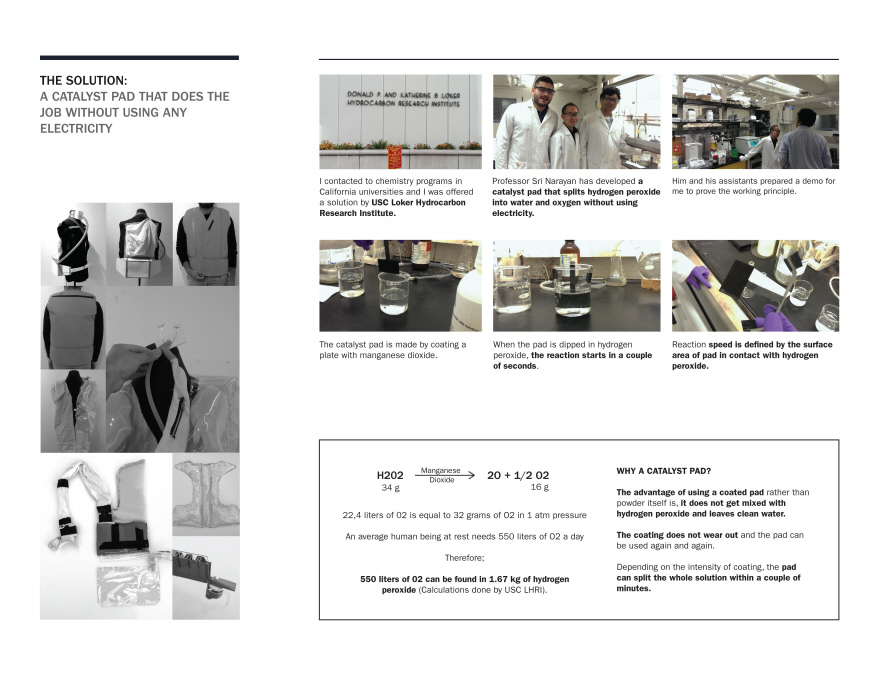 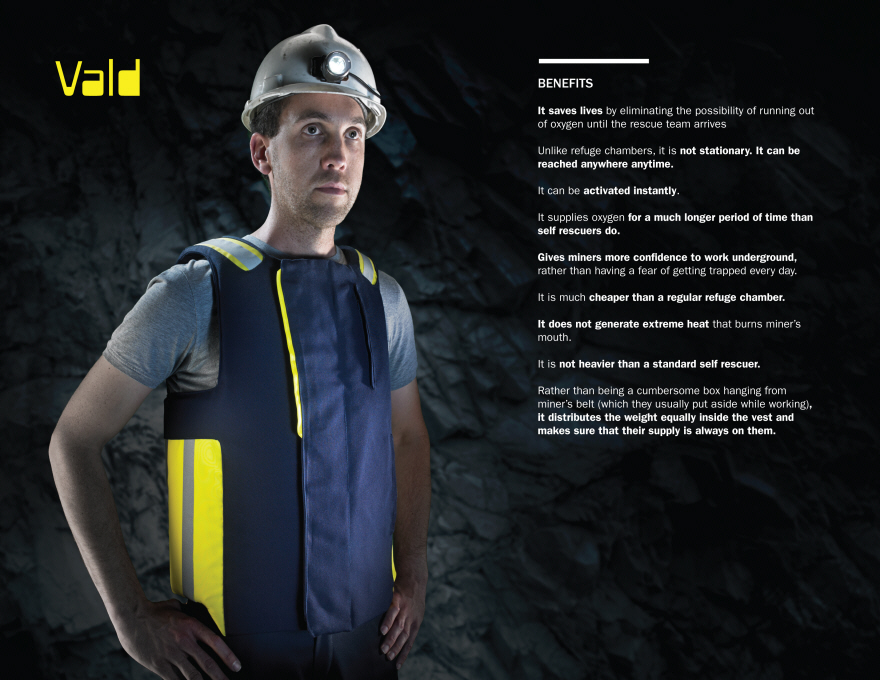 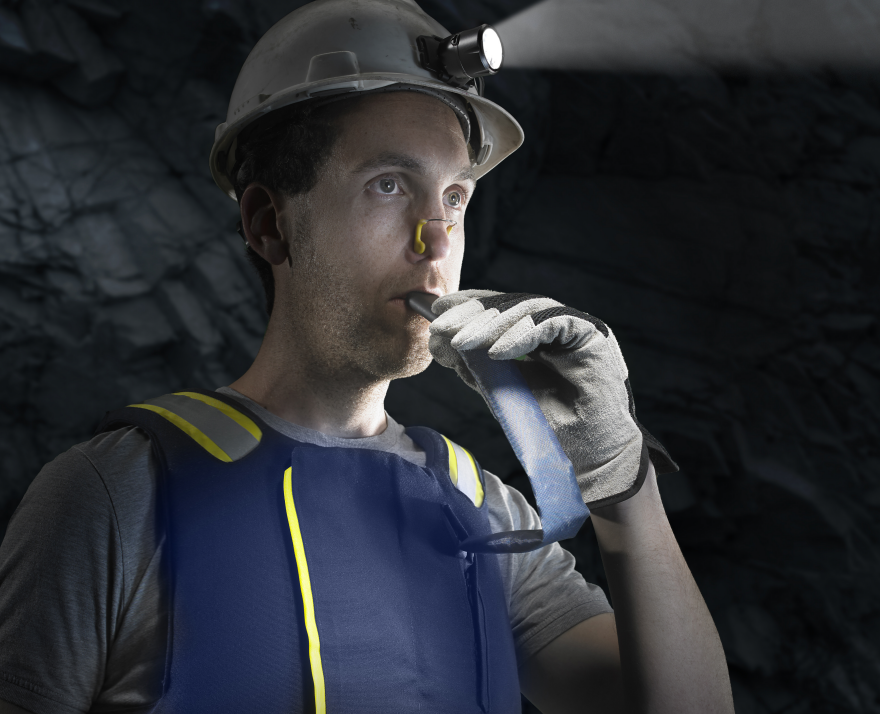 The brief was to design a product for blue-collar workers. A couple of months before this project was given, there was a major mine accident that happened in my home country, which killed 301 people. This made it the deadliest mining disaster of the 21st century. I still chose this topic and wanted come up with a product that ceases fatalities in an underground mine, even if I was not allowed to go inside a mine to do research without a month of training. To be able to understand the problems that cause deaths, I watched many documentaries that investigated accidents and I interviewed 23 mining professionals from US, Canada, South Africa, Australia, Germany and Turkey. Almost every mining professional supported me for my efforts to tackle this issue. However, there are different approaches to safety in different parts of the world. Mining professionals from Australia told that they stay away from developing any product that could possibly encourage miners to stay underground in a case of accident. In other words, their mining safety training focuses on ways of leaving mine as soon as possible.

No matter how strict the training and regulations are, people still die in mine accidents. I strongly believe that there will always be fatalities due to human negligence. Therefore, such possibilities should be eliminated by products and technology.

The biggest challenge was battling against technological limitations. Many methods that I tried, failed painfully. I had to contact electrochemists around the nation, asking for help to make my idea fully plausible.

Currently, due to their explosive nature, cryogenic or compressed oxygen is not allowed to be used underground. The only solution being used underground, is the oxygen candles (potassium superoxide) which are already heavy (2.5kg) to carry around to supply just an hour of clean air. Also, when this reaction happens, it releases a vast amount of heat, which burns the miners' mouths. However, they have to bear this in order to survive.

In the International Space Station, they simply use electrolysis to split water (H2O) into hydrogen (H2) and oxygen (O2). To be able to do that in space, they have an endless source of electricity, the sun. However, this is not possible underground. Since miners need to reserve their oxygen and energy until they get rescued, making them generate their own electricity is out of the question. To split water into hydrogen and oxygen by using less or no electricity, I contacted the electrochemists from all around the U.S. for help. Finally, a professor from the USC Hydrocarbon Institute invited me to his lab and offered me of using hydrogen peroxide (H2O2), instead of water, and a catalyst pad that he recently invented for a different purpose, which splits H2O2 into water (H2O) and oxygen (O2) without using power. This way, less than 2 kg of H202 in 70% concentration (legal limits) is enough to supply 24 hours worth of oxygen to a miner. In other words, not only does it revolutionize how a breather works, but it also makes it lighter to carry or wear. Additionally, what is left from this reaction is water (H2O) that miners can drink in order to not get dehydrated in that 24 hour wait period. Rather than putting the supply in a cumbersome box, which miners usually take off while working, Vald embeds this in a vest so that it is always with them no matter what.

The most crucial component of Vald is the bladder. To be able to make it puncture and pressure resistant, yet flexible and thin, it uses laminated vectran, which can be enclosed by heat sealing. The inside of the laminated surface uses a phenolic coating that prevents hydrogen peroxide from wearing the vectran out. Lastly, the exterior of the vest uses ultra soft flame resistant fabric (Indura) to prevent it from catching fire.

Currently, all self-rescuers are a one time use only. However, the bladder in Vald that contains hydrogen peroxide can be refilled again and again. In other words, the inside mechanism needs very little maintenance and can be used in a different vest, even if the current vest wears out. Overall, this extends the product's life and lowers the costs significantly.

There are around 300,000 people working in underground mines in the U.S. alone. Distribution channels would be through mining corporations, online sales, and independent safety inspectors. Since it is very low cost in comparison to a refuge chamber, it can easily be attained in countries where the use of certain safety equipment is not strictly enforced by law due to extreme costs.

To put simply, Vald is designed for anybody who works in the underground mines.

-First and foremost, it saves lives by eliminating the possibility of running out of oxygen until the rescue team arrives.

-It is not stationary. It can be reached anywhere, anytime.

- It gives miners more confidence to work underground, rather than having a fear of getting trapped every day.

- It weighs less than an average self-rescuer.

- Rather than being a cumbersome box hanging from miner's belt, it distributes the weight equally inside the vest and creates a more comfortable working experience.

- It can be activated instantly and oxygen production can be adjusted due to need.

- It is much cheaper than a regular refuge chamber.

This project felt particularly contemporary, in response to a long-standing problem that is not often in the public eye.

It was well-researched, with a commitment to scientific understanding of the vest’s feasibility, with a very well-executed prototype.