Throughout our research, we defined key areas we needed to solve in order to further aid pregnant women in their journey to find nutritious food and meals. We want to offer pregnant women the security of having easy access to nutritious food for an affordable price. Pregnant women should be able to get food through a short distance or have it delivered right to their doorstep, they should have access to balanced healthy meals, agricultural resources, support to buy locally grown meals, and consume the right quantity as well as the quality of produce.

Though there are growing initiatives such as farm-to-table solutions in Puerto Rico to support farmers, there is a lack of solutions that really cater to pregnant women in need of food. 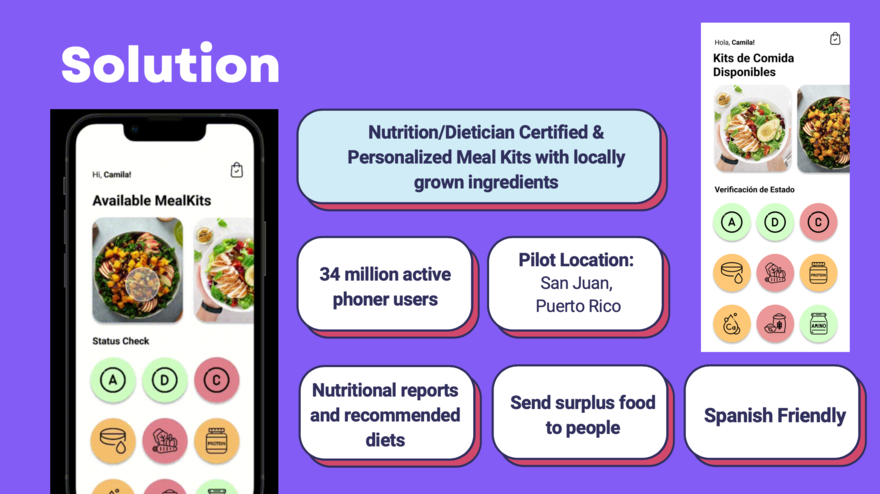 Importance of Good Nutrition During Pregnancy

Nearly a billion people are affected by food insecurity around the world (SOFI FAO, 2021).In 2020, about one-third of the world's population (2.37 billion) lacked appropriate food, a rise of nearly 320 million people in only one year (SOFI FAO, 2021.) Food insecurity, whether moderate or severe, has been steadily increasing for the past six years, affecting communities across all orders with more than 30% of the world's population being impacted (United Nations, 2020.)

A large body of evidence demonstrates that food insecurity has detrimental impacts on health and well-being in the short and long terms for children and adults. These impacts often hit women and mothers especially hard. Food insecurity during pregnancy has been linked with gestational diabetes, iron deficiency, and low birth weight. In this study, we particularly focused on Puerto Rico which faces extreme food insecurity and has been economically crippled by recent natural disasters.

In 2020, the median household income in Puerto Rico was $20,296 compared to a median income of approximately $67,521 in the U.S. mainland. Nearly half (43.5%) of the population in Puerto Rico live below the poverty line and unemployment on the island is 40% – which is the highest in the U.S. Additionally, Puerto Rico has not recovered from an economic recession since 2006 and has since accumulated $70B in debt which is equivalent to their total GDP. This means that there are many families that are struggling to make ends meet and obtain a suitable quality of life.

Puerto Rico is a US Incorporated Territory that has a population of 3.194 million people according to the 2020 stats of the United States Census Bureau. The country is a Caribbean island which means that it receives the impact of a tropical climate including hurricanes, floods, droughts, and even earthquakes. In September 2017, the island received the impact of a category 4 hurricane. Hurricane Maria caused over $94.4 billion in damages and about 80% of the crops were destroyed which represented a $780 million loss in agricultural yields. (Mercy Corps, 2020. Due to the damages done to the agricultural crops, the imported food necessity in Puerto Rico increased to over 85% and only 15% being locally grown even with the island's tropical climate that allows farmers to cultivate local produce year-round. (Ayala, Kennedy, Winter, 2021.) This wasn't always the case because history has shown that in the 1940s agriculture was the cornerstone of Puerto Rico's economy, creating jobs for over 45% of the population on the island and representing over 55% of locally grown food and 45% being imported. By 2019, the agriculture industry sector represented less than 1% of the commonwealth's GDP and the employment rate decreased to less than 2%.

How has this created an immediate impact on the problem of food insecurity around the island?

Since Puerto Rico currently imports over 85% of its organic produce from the United States, this means that it travels a minimum of 1,500 miles for weeks at a time (Fusion Farms, 2019.) Given the number of miles that these products cover and the time that it spends on Puerto Rican customs, it mostly begins to rot by the time it gets to the local stores. Shipping these products from the US into Puerto Rico signifies a number of problems not only for any of the parties involved but also for the environment in general. The following factors highlight the quality and nutritional value of the products that are imported into the island:

Food Miles: Every mile that is traveled in order to get from the farms in the United States to Puerto Rican plates exhausts greenhouse gasses that consequently contribute to the growing issue of climate change.

Freshness: It takes a long period of days or weeks to travel from the United States and other nations where the island receives its imports. When it arrives at the port, the natural process requires products to sit in customs for a lengthy period of time. So, by the time Puerto Ricans gain access to the supposedly "fresh" products, it is often starting its rotting process.

Nutrition: The nutritious content of fruits and vegetables degrades gradually over time. By the time food reaches stores, it has lost a significant quantity of nutrition. For example, within 24 hours of harvest, spinach loses 90% of its vitamin C content and within a week it loses 50% of its foliate and carotenoids.

It is clear that imports are hurting the island and supplying very little nutrient-dense food to the citizens of Puerto Rico.

How does this translate to the problem of food insecurity for women around the island specifically?

In Puerto Rico there are a total of 21 deaths per 100.0000 live births of deaths of women during pregnancy and a 40% access to emergency food services for these women.

According to the Seguridad Alimentaria en Puerto Rico study, Arecibo presented the highest risk of food insecurity in Puerto Rico (40.6%) followed by the Metropolitan Area (31.8%) and Ponce (31.4%). According to March of Dimes, the Metropolitan Area has a combined Preterm Birth Rate of 10.6% and 10.7% which signifies a Preterm Birth-Grade of D+ and Ponce has a Preterm Birth Rate of 11.7% which signifies a Preterm Birth-Grade of F. These numbers highlight that there is a significant problem for women around the island to access resources that they need to maintain a healthy pregnancy.

It is essential to note that some main economic security programs in Puerto Rico receive less money than in other states or territories, making them less available to satisfy citizens' fundamental needs and emphasizing the necessity of NAP in providing basic support.

Puerto Rico's NAP Federal Program: This federal food assistance program is based on capped funding originally set at about 25% less than funding for the SNAP federal program. The SNAP program differs from Puerto Rico's version of the program because it is based on the needs of the states and the NAP program is a block grant for a certain amount of money, regardless of the needs of the island. The amount provided in the NAP program is significantly smaller than the funding for SNAP. This means that the island has to set eligibility levels much lower than the states in order to keep spending within the budget (CDPP, 2020.)

Local Food Assistance Programs Available: There are approximately 1000 "nearby" local food assistance programs available on the island, but their locations are not equitably distributed which means that even though some programs might be applicable to the south side of Puerto Rico, the nearest food program might be an hour away which is the case of Ponce and Cabo Rojo. This poses an accessibility problem for many people around the island because it requires transportation to get to these locations.

TANF: Puerto Rico receives a TANF block grant to help families fulfill their basic requirements. However, in the Commonwealth and other territories, the block grant has some restrictions that states do not, such as a federal spending maximum for the grant's activities. As a result of this, and a restricted budget that affects all governments and territories, Puerto Rico can only help a small percentage of poor families, just 4 out of 100 in 2017.

Pregnant women should be able to get food through a short distance or have it delivered right to their doorstep, they should have access to balanced healthy meals, agricultural resources, support to buy locally grown meals, and consume the right quantity as well as the quality of produce.

Each meal will be offered at a fixed rate through monthly subscription plans. Additionally, users will be able to pay for these meals using cash or benefits from federal programs such as NAP or WIC We will keep our costs low by using produce that is not visually fit to go to market and often goes to waste.

Through this, we can bridge the gaps between food insecure mothers, local farmers, and medical professionals. Not only do these efforts have the potential to impact our key stakeholders but can also pave the way to promote agriculture on the island and create new jobs. It is our intention and increase scalability so that we can not just apply this to one underserved community but to communities across the globe.