Storyboards are a powerful way to communicate user requirements and to validate ideas before they are fully designed or implemented. They are used during the earliest stages of the design process to visualize design solutions, to understand them in a larger context and to create a common understanding about the problem to be solved. But what if there is not enough time to draw them or the necessary skills are missing?

Not everyone is a visual artists capable of illustrating a great-looking storyboard in a couple of minutes to present an idea. When working together with multidisciplinary teams in a workshop, this situation can get even trickier, since many team members simply refuse to draw. Even though the point is not to create a work of art, people without the drawing skills necessary to create visually appealing storyboards often feel uncomfortable when being asked to draw. This discomfort makes them focus on their limited drawing skills, rather than on developing and communicating their ideas.

So how can we help these multidisciplinary teams to focus on the message they are crafting and to stop thinking about how good they are drawing?

We created "Scenes" as a storyboarding method and tool to create visual stories quickly, collaboratively and iteratively. It includes a set of pre-defined illustrations that can be easily combined in scenes, empowering people from any discipline to shape their ideas and scenarios in the form of fun illustrative storyboards without the need of refined drawing skills. 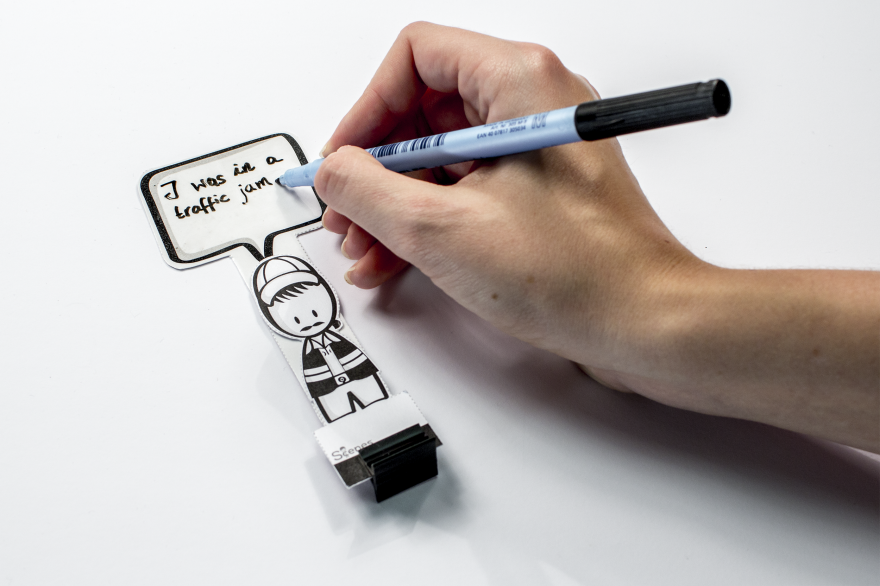 Writing a dialogue Users of "Scenes" can write with non-permanent markers on the elements and erase again. 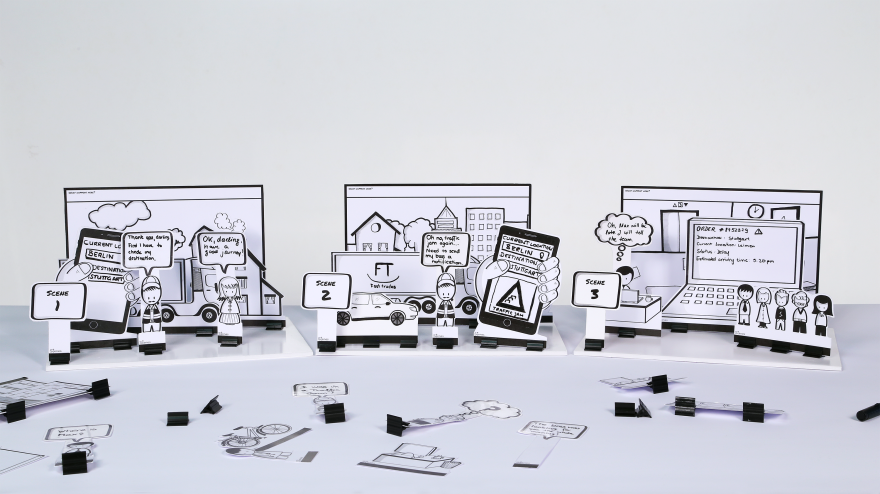 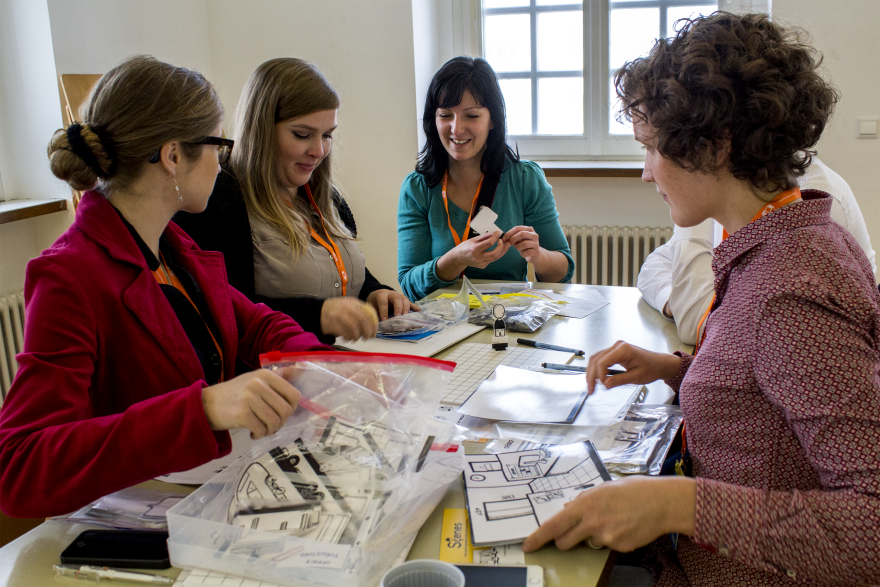 Unpacking Participants of a workshop at a UX conference unpacking the scenes elements to create a story. 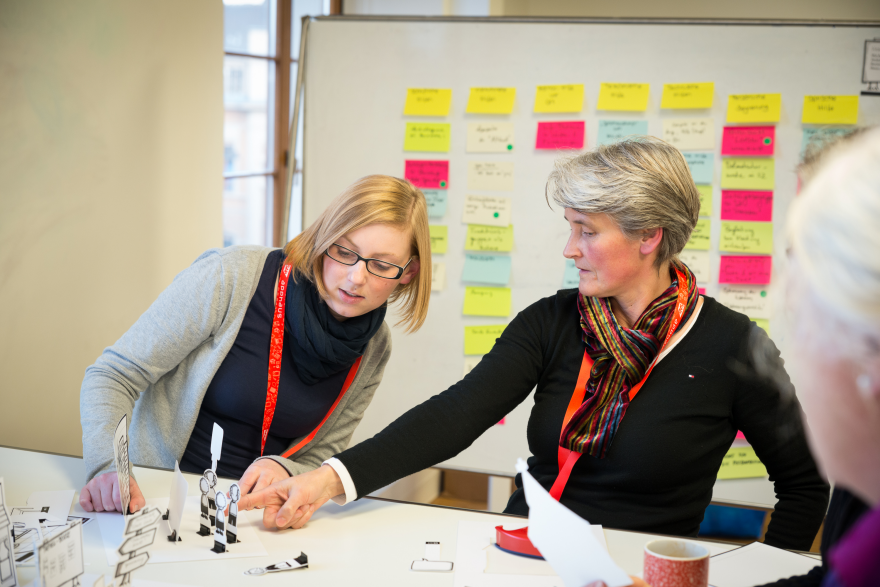 Ideating Employees from the welfare agency of the City of Heidelberg creating new scenarios for a service design concept. 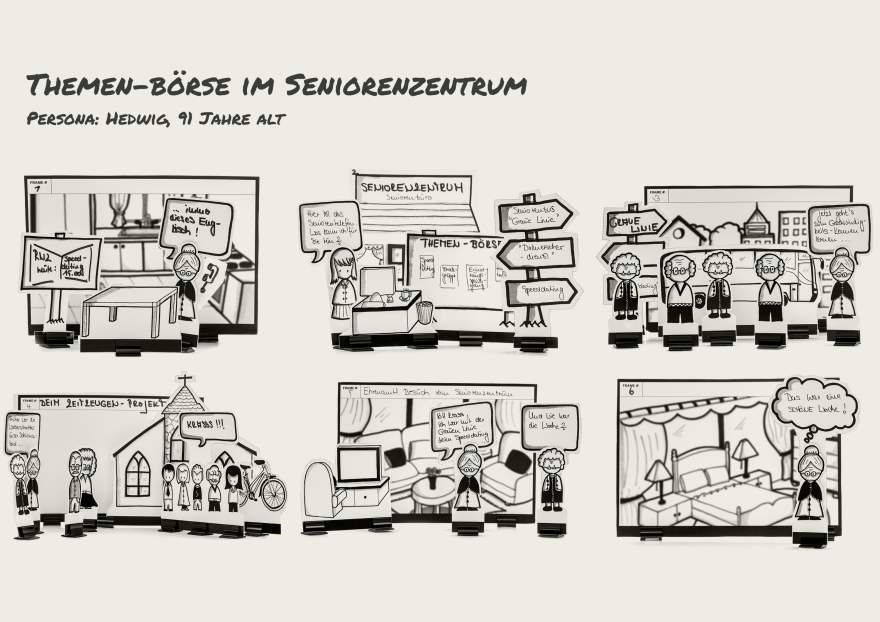 Storyboard for service design concept After the physical scenes are created, they can be photographed one by one and put together in an application of choice. 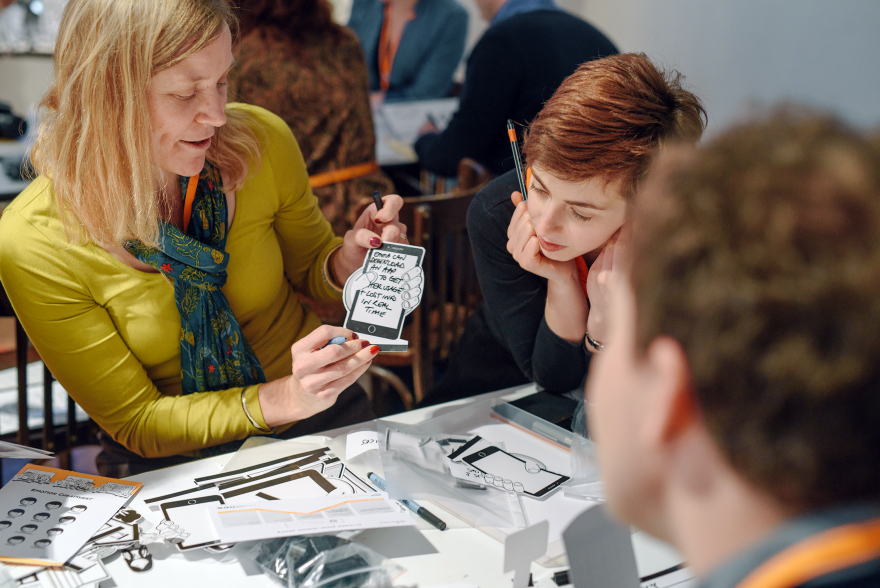 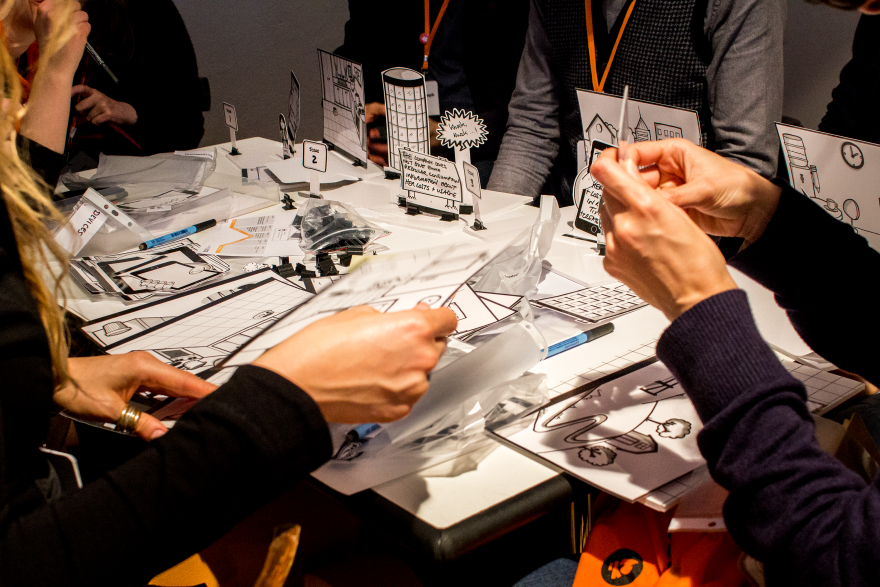 Unpacking and selecting Participants at service design concept selecting the elements for their next scene. 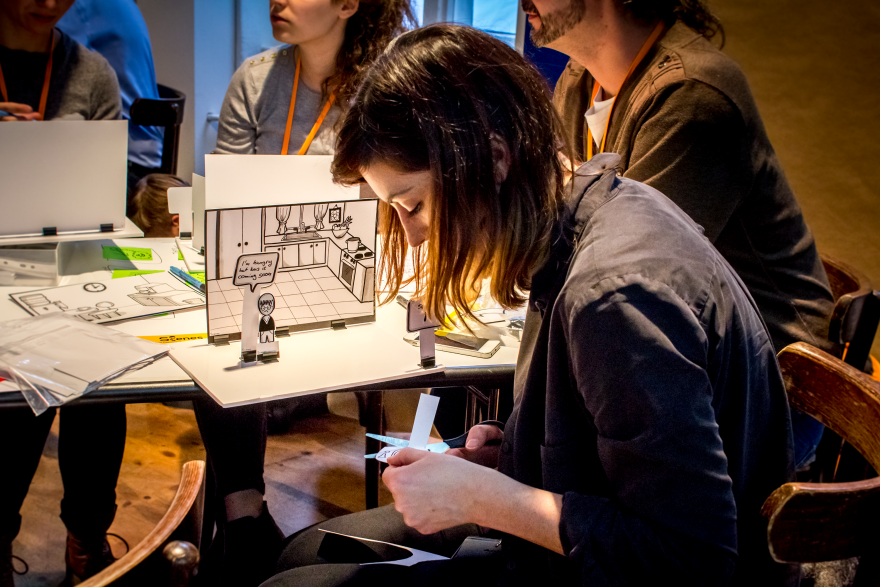 Adding up Participant at service design conference creating an additional element for the scene. 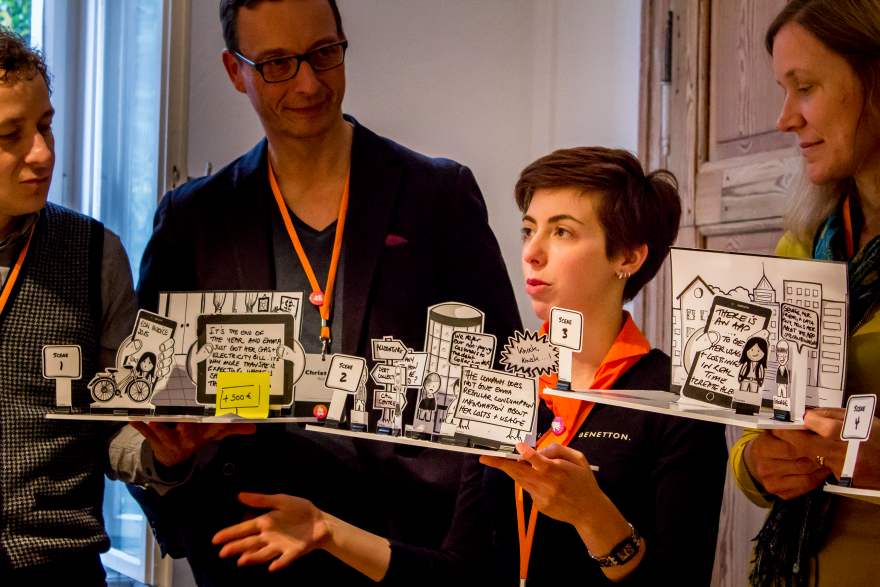 Time to present Team presenting the story. Each team member has a scene to tell. 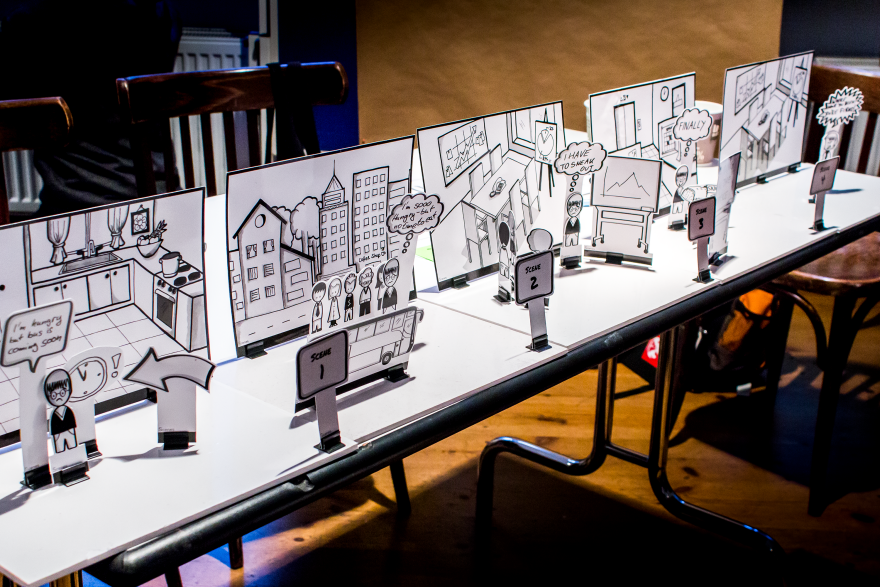 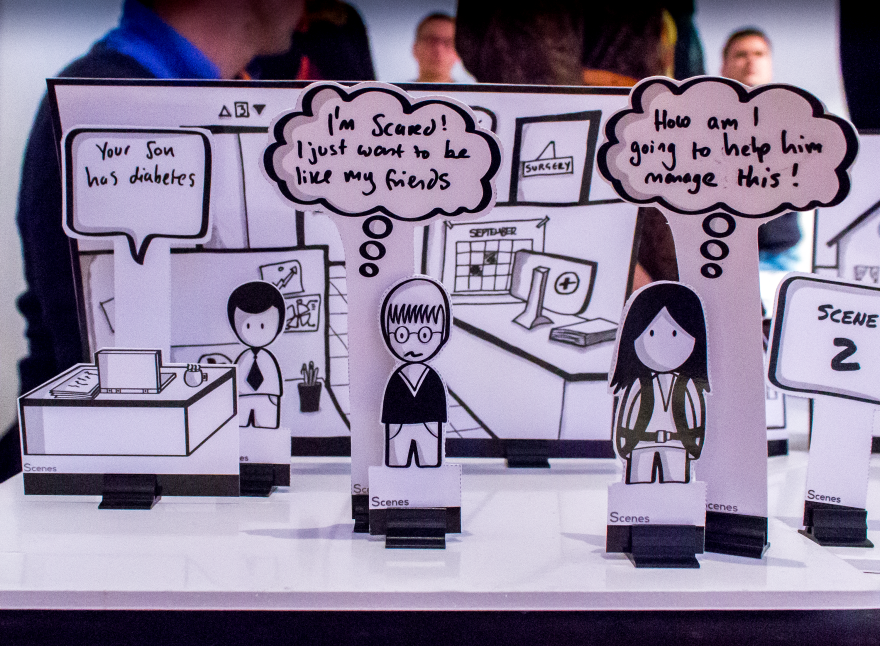 Scene close up One of the scenes created for the beginning of a vision story at a service design conference workshop. 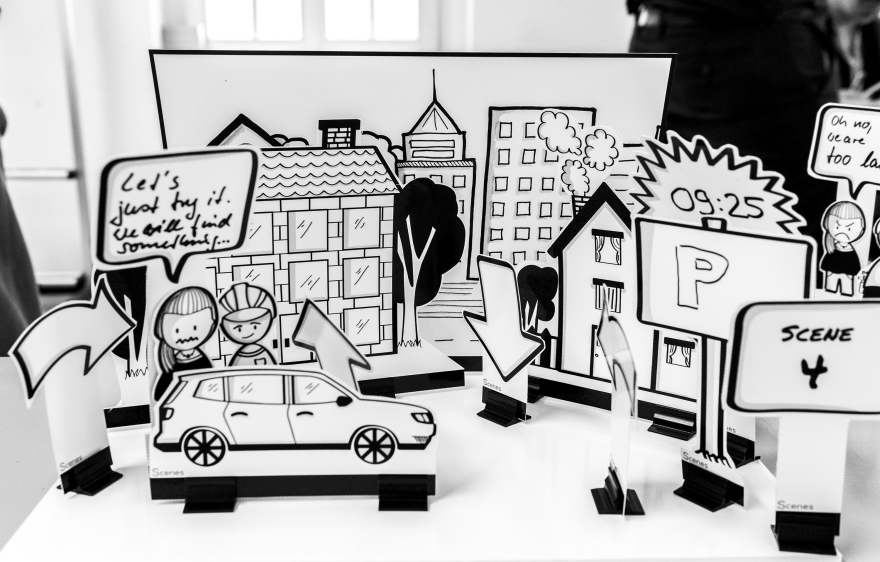 Scene close up One of the scenes created at a workshop in a ux conference. The arrows in different positions are used to show disorientation and confusion in the main characters.

As computational technology spreads in our world and in our lives, the role of design in the creation of products and services is expanding.

On one hand, the practice of designing single objects or UIs is shifting to the design of systems with different actors, different screens and objects connected with each other, with different form factors and input/output mechanisms each. In these systems, every single element needs to be conceived and observed within its context in order to ensure an appropriate and holistic experience.

On the other hand, design is becoming more inclusive. This is not only about working in multidisciplinary teams with different disciplines involved in one same project. This is also about inviting other disciplines to embrace design, because to make these holistic experiences possible, they need to be created not only by designers, but by everyone involved in a collaborative way.

To support these two aspects, we need design methods and tools that, on one hand, leverage context, allowing us to see the broad picture of what we are creating; and that, on the other hand, can be approached and understood independent of discipline.

"Scenes" was created to cover both of these aspects. On one hand, it leverages the power of visual stories to communicate and understand context, and, on the other hand, lowers the barrier that the practice of storyboarding normally presents to people without refined drawing skills. "Scenes" offers people from any discipline the means to create visual stories of their design ideas collaboratively and iteratively.

How does "Scenes" work?

Scenes is both a tool and a method. The tool can be used physically or digitally.

The illustrations have been created with a hand-drawn black-and-white look and feel to leverage the unfinished appearance of early prototypes within the design process. This aspect has also made possible for the users of "Scenes" to use color as a way to customize the elements according to the story they are creating.

Some illustrations have a blank area for customization, which allows the users of "Scenes" to adapt the graphical elements better to their story and add textual information. For example, characters' faces have only eyes, and can be enhanced with emotions by drawing eyebrows and mouth on them; device screens can be completed with the corresponding UIs according to the story; buses or trucks can be branded with a logo; etc.

In the physical instance of "Scenes", the elements are covered with a laminated layer, making it possible to erase the content and re-use the elements. This makes iteration easier when creating the stories.

The elements are available also digitally to support further iterations of the stories created and keep consistency throughout an entire design project.

The method consists on building physical storyboards by placing the illustrations on horizontal surfaces. Each horizontal surface works as the "canvas" to create a scene in the story, just like a panel in a comic. The horizontal surfaces are either sticky or magnetic (new version) to fix the elements on the desired position and allow the transportation of the scene created A storyboard is composed of two or more scenes.

The users of "Scenes" are free to arrange the elements on the horizontal surfaces, however a scene is normally composed of a background layer that depicts the setting and a front layer with smaller elements including the characters. Each element is available more than once in the set, so that it can be present in more than one scene.

Since the graphical elements can be grabbed and physically moved around, the effort to make changes is minimal, encouraging people to try out ideas and actively participate. This method allows every member of the team to simultaneously contribute to the creation of the story, facilitating collaboration.

Since its launch in October 2016, we have used "Scenes" successfully in design workshops with various customers from different industries: automotive, chemicals, insurance, public sector, etc. All of them have shared a strong positive feedback. Some customers have started to use "Scenes" on their own to visualize ideas for future business scenarios.

Every time we use "Scenes", we observe how this method increases participation, fosters creativity, saves time in the visualization of ideas and helps people from different disciplines and age groups to understand each other on a visual level.

After a design workshop with a customer from the chemical industry to create a vision of their current procurement process, the facilitator of the workshop mentioned:

During a project with the welfare agency of the City of Heidelberg, we used "Scenes" to prototype ideas for a service design concept for elderly people. In one of the workshops with the social workers, we observed how "Scenes" empowered the participants to develop their ideas instead of focusing on creating the drawings for the storyboard. All participants were highly engaged and could use the tool with almost no introduction.

The results from the workshop showed us how "Scenes" could highlight and enhance the potential of people from any discipline to visualize and shape their ideas, as well as to iterate quickly on a visual and tactile level.

But the use of Scenes did not end with the workshop. We iterated further on the customers' ideas and used the same characters and elements of "Scenes" to create digital storyboards. This helped to keep consistency through the whole design process and to generate empathy towards the end-users or protagonists of the storyboards created. The characters became alive in the minds of the customer and remained present for further iterations of the concept.

The success of "Scenes" has given us energy to continue improving and expanding this method and tool. Currently, we are offering a free DIY version of the "Scenes" basic set for download.

The next steps for "Scenes" are the expansion of the library in specific industry sets and the creation of a community where elements and stories can be shared.

The whole panel felt this was a super exciting project and had very clear and meaningful intentions.

Setting out to help non visual and non artistic groups to bring narratives and people into their processes is such a crucial tool.