Beaver Centered Design (BCD) was a six-week project that introduced architecture students to a new way of looking at the relationship between the human and non-human world. BCD is both a critique of Human-Centered Design–which sometimes ignores the natural world–and how architecture is taught–which often ignores humans. This was the first project for the advanced architecture studio at Smith College in the Spring of 2022. Students, in teams of two, were asked to design and fabricate a device or installation that responded to the needs of beavers.

The goals of this project were to expand students' woodshop, collaboration, CAD, and representation skills, while introducing them to speculative design. Students came to know beavers through observational exercises, expert interviews, and secondary research. Human-Centered Design activities and worksheets were chosen and adapted to apply to this non-human species. Projects covered the speculative, a Beaver Trap Trapper; the playful, a toy that builds empathy for kids; and also the practical, a robot that plants Aspen, a tree of choice for beavers. Students created posters with diagrams, sketches, and renderings, to supplement the work they did in the woodshop. Student work will be displayed as posters at BeaverCon in Maryland in June 2022.

Wetlands are part of a nature-based approach to climate resilience. While humans can spend hundreds of thousands of dollars and use construction equipment to create wetlands, beavers do it best. Like humans, beavers drastically alter their ecosystems. Unlike humans, beavers create habitats for thousands of species. These habitats serve as carbon sinks, fire breaks for wildfires, and they raise water tables preventing draught. During the fur trade from the 1600's to the 1800's, beaver pelts were highly valued as the raw material for waterproof hats in Europe. Once the Eurasian beaver population was decimated, trappers came to the new world and nearly trapped the North American Beaver to extinction. This trapping powered western expansion across the United States. Wetlands were drained, and humans settled in former floodplains. When Europeans arrived in North America, there were some 400 million beavers. By 1900 that number was reduced to a hundred thousand. Today, beaver populations are rebounding. As the beaver population rebounds, there are increasing conflicts between humans and beavers, flooded farmlands and roads, and the downing of precious trees. I became enchanted with beavers when they moved onto my family's land during quarantine, bringing a nearby wetland to life. Landowners (including my family) have typically responded with trapping; however, there are other options. Beaver allies are looking at ways to coexist with beavers through devices that moderate flooding and tree felling. 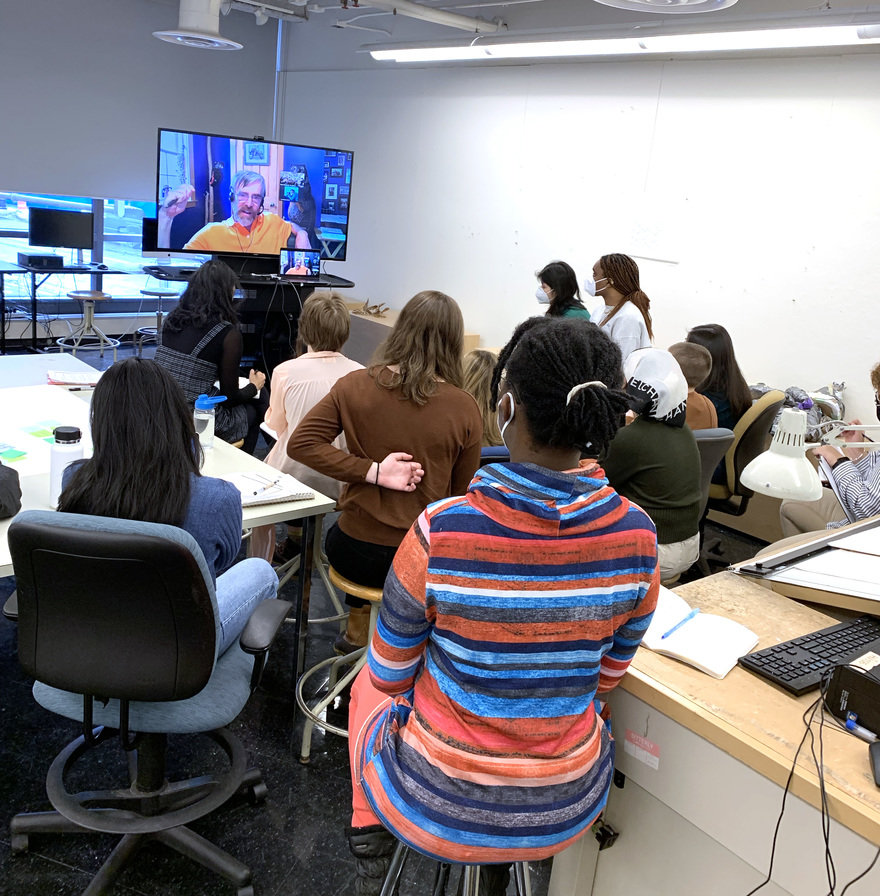 Zoom Feedback Mike Callahan, the Executive Director of The Beaver Institute, gives students feedback on their insights, and design opportunities. 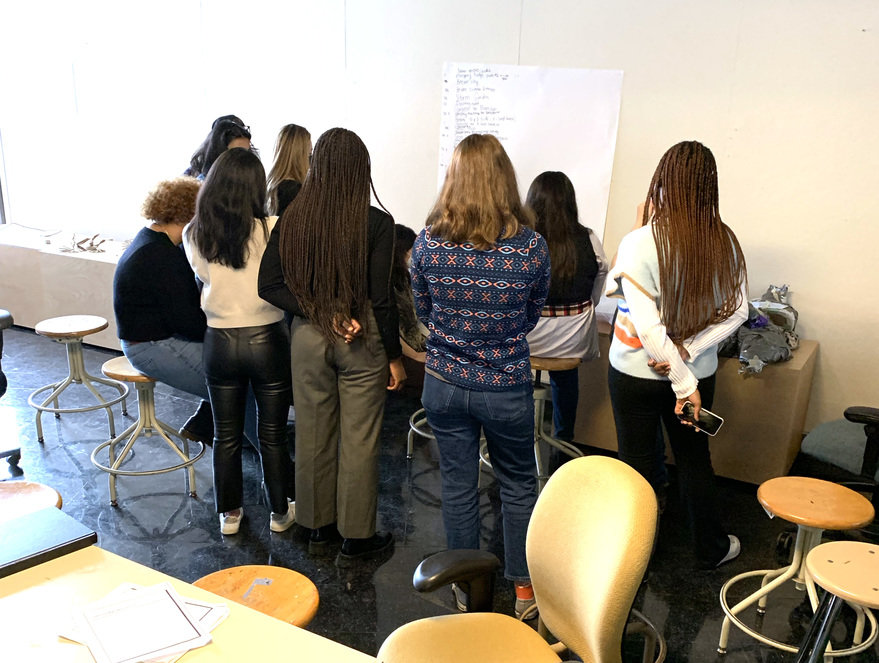 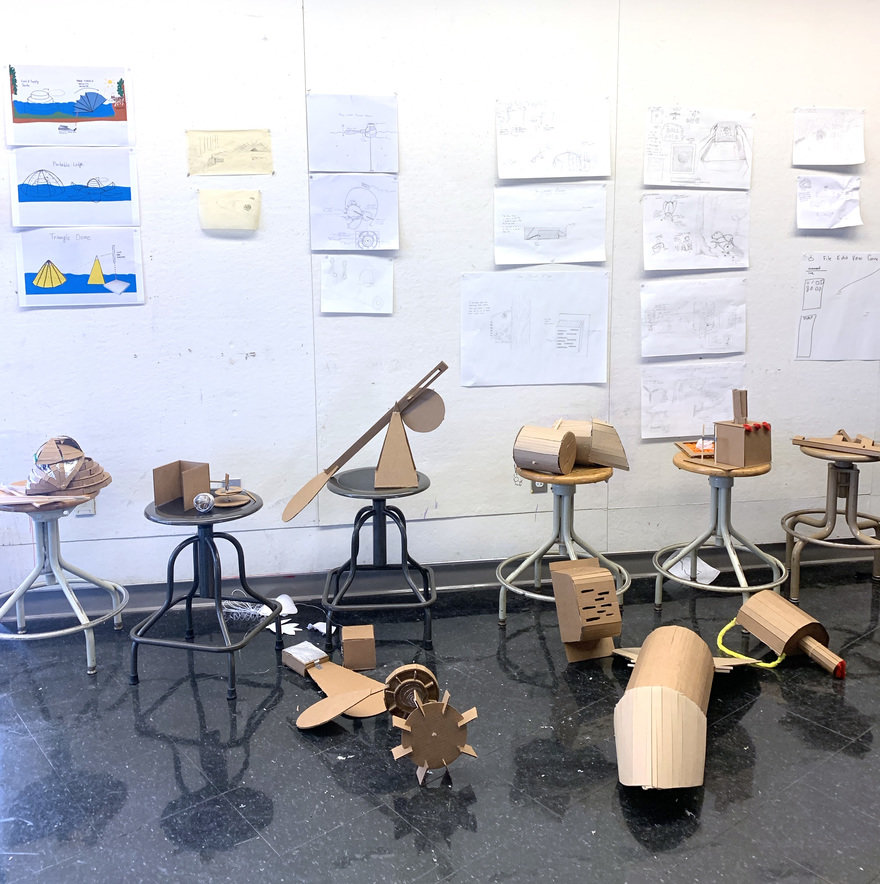 Mid-Term Students presented sketches and low-fidelity prototypes based on their design opportunities. 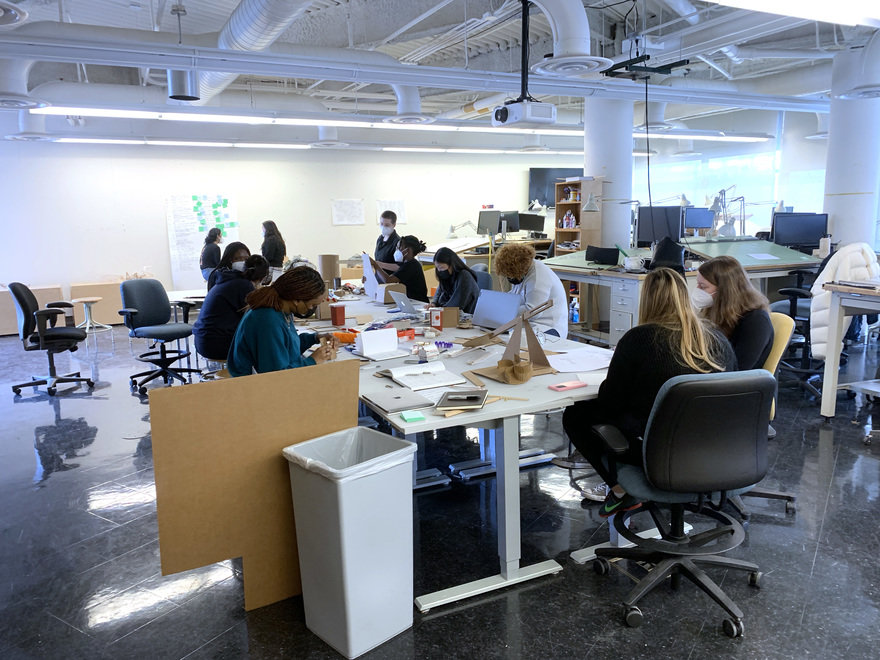 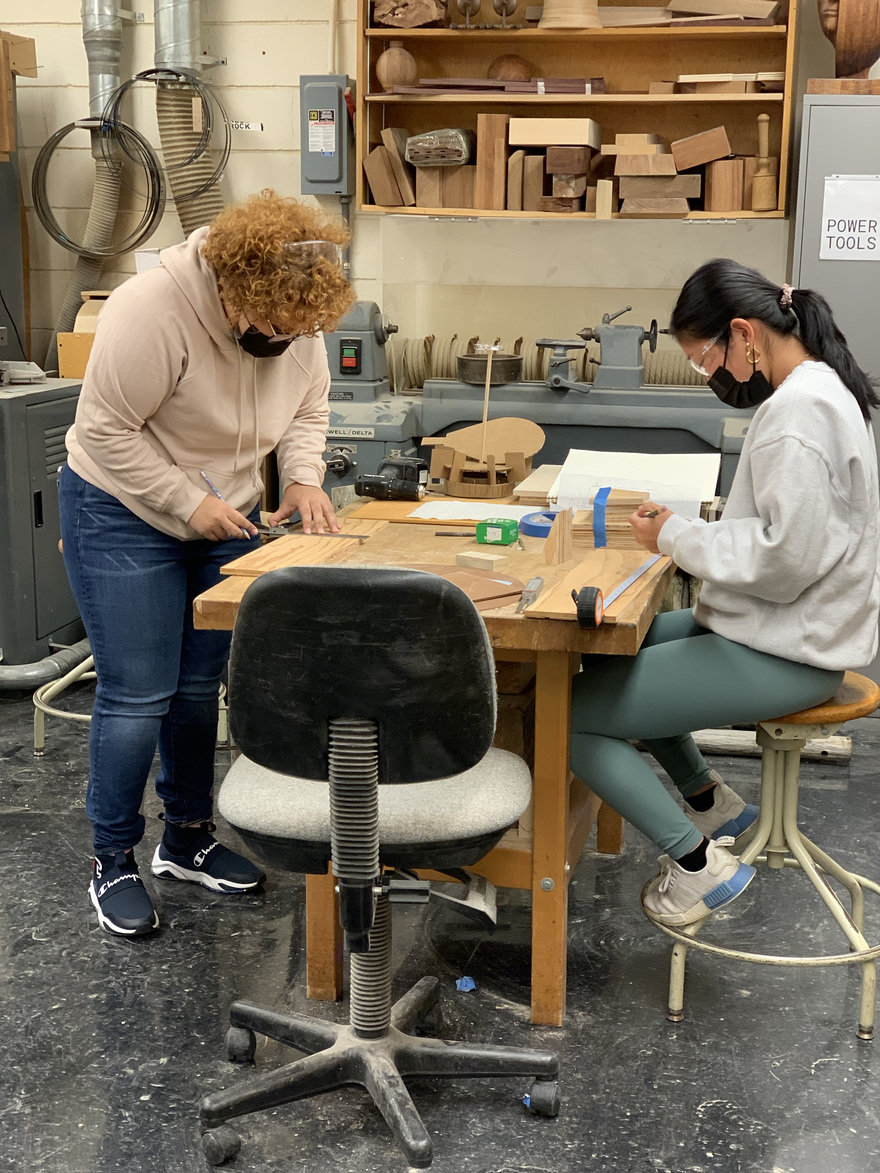 Working in the Woodshop 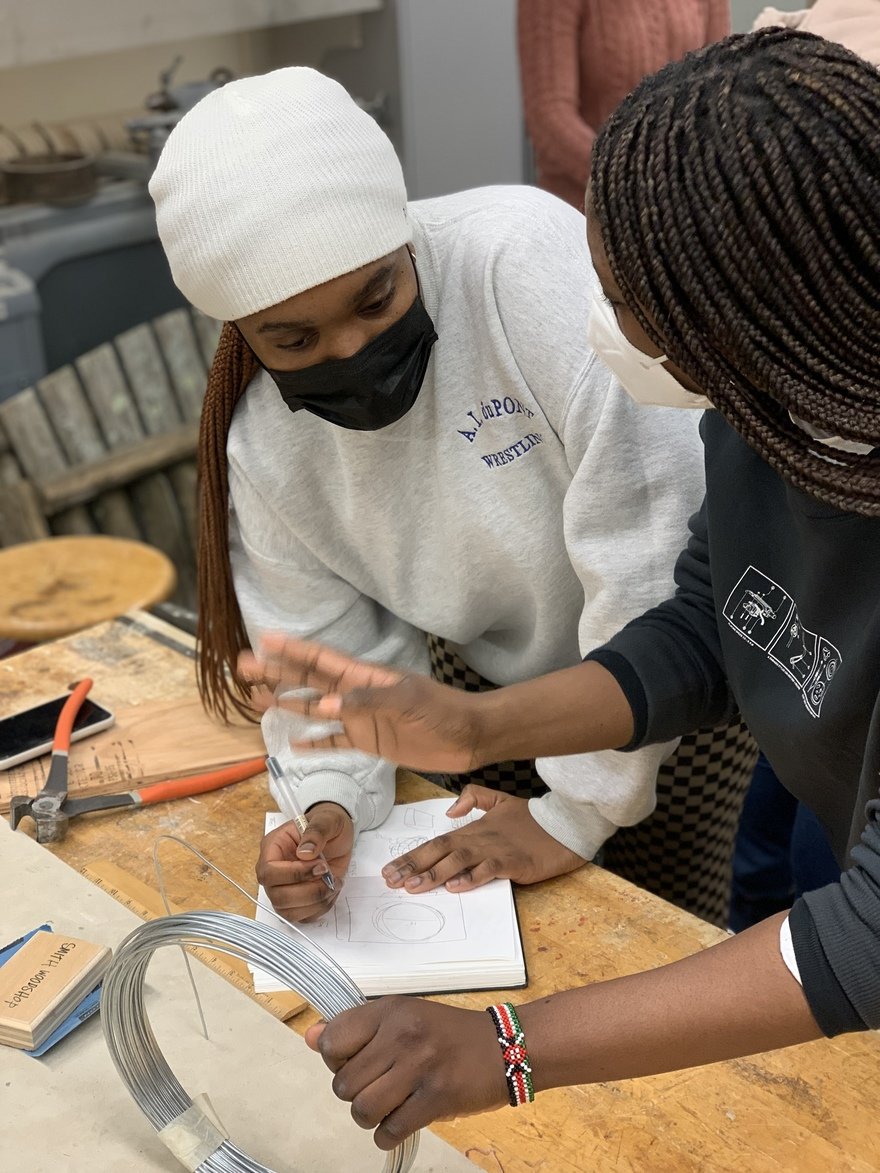 Working in the wood shop 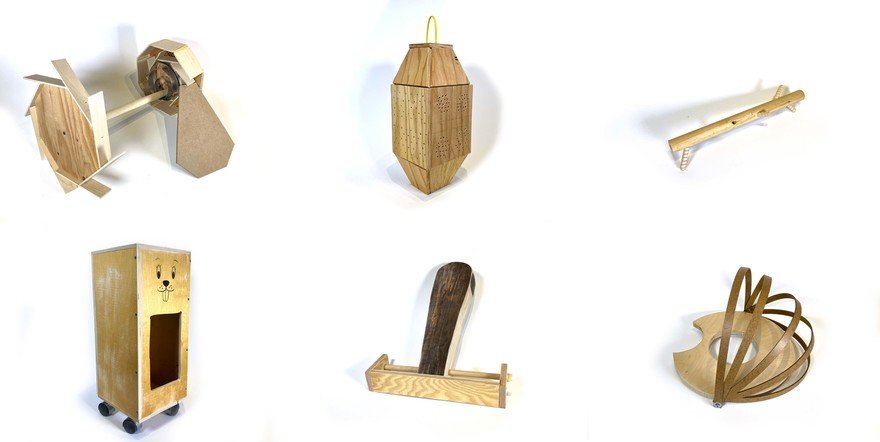 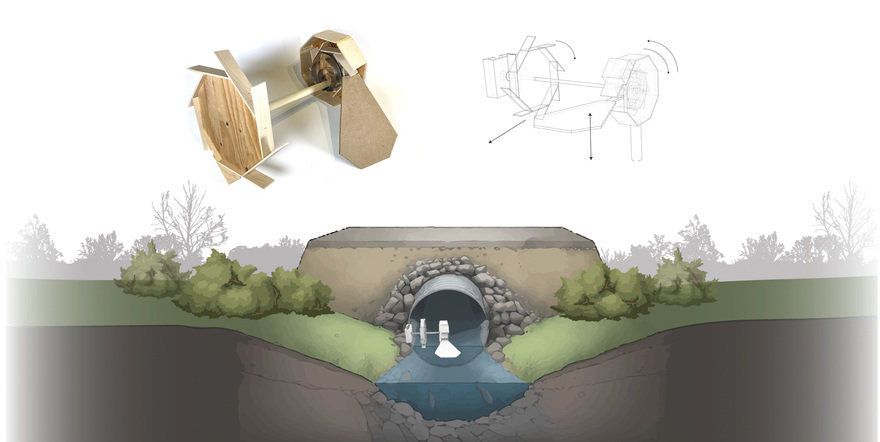 Tail, Flail and Bail Beavers often plug culverts. This team created a device that would use the familiar tail-slapping that beavers use to warn other beavers of danger to scare them away from a culvert. 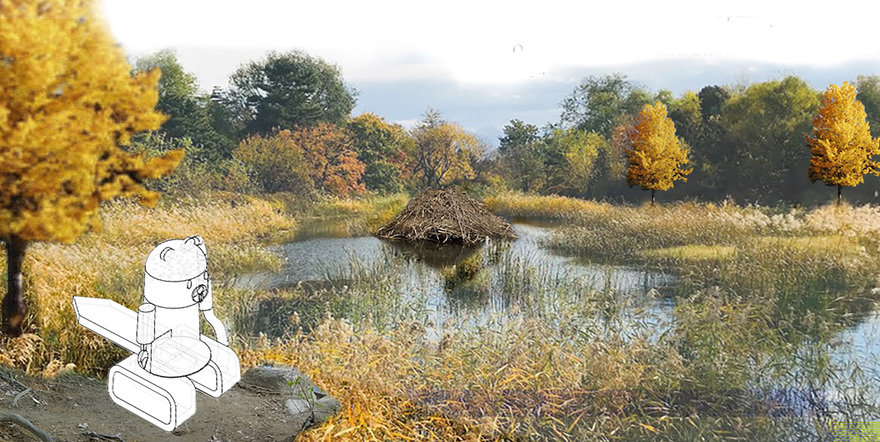 Beavee in the wild Beavee is a robotic incubator. Beavee's purpose is to maintain Aspen populations, beaver's choice tree, up to a consistent number so that beavers can stay put in their chosen wetland. 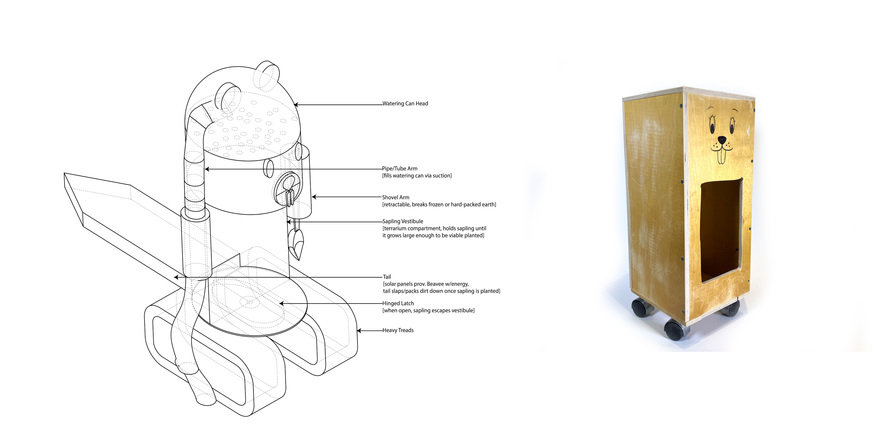 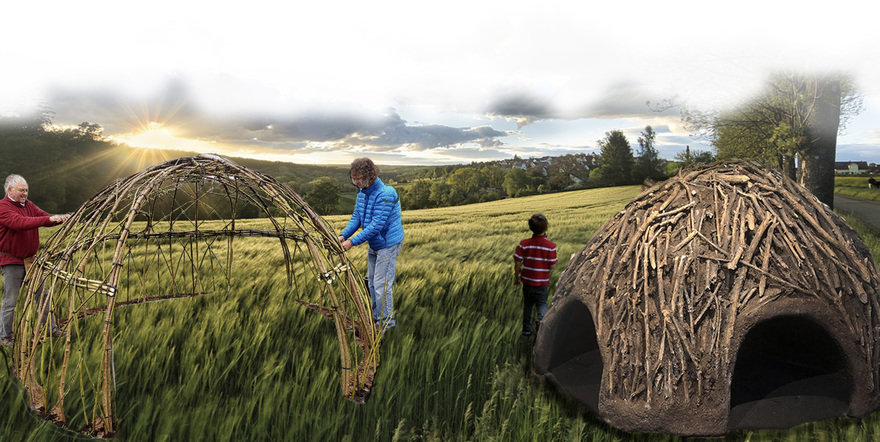 Beaver Dam and Lodge Kit Rendering Beavers have a bad reputation. This project is a toy that seeks to build empathy for the species. Kids would be able to use the toy to build dams and lodges. 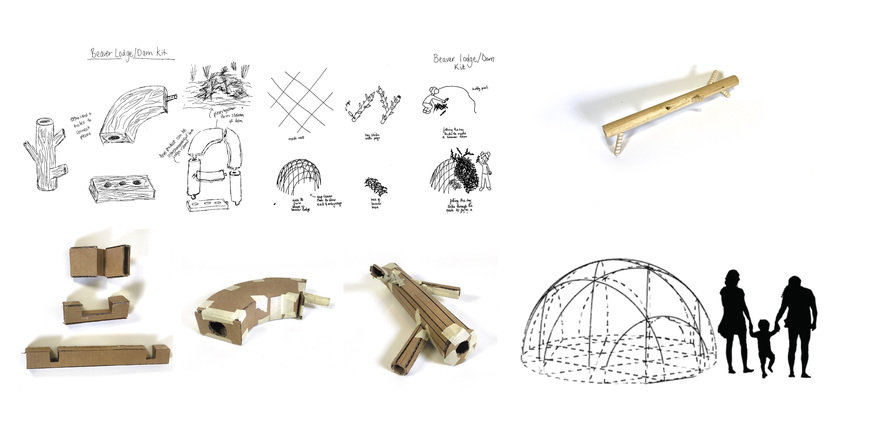 I became fascinated by beavers when I spent a number of months up in the swamps of southern New Hampshire during the first part of the pandemic. We were isolated in the woods, and when beavers moved onto the land in the late spring I was thrilled to see the swamp on the property come alive with cattails, water lilies, and spring peepers. Beavers build dams to create ponds for their lodges, whose features include an underwater entrance. These aquatic animals are uncomfortable on land, so they often build secondary dams to expand their ecosystems to enable their access to a wider range of trees, which they eat and use in the construction of their lodges and dams. The beavers who moved onto our land eventually built a secondary dam which clogged up a culvert (a tube for a stream or river) which ran under the driveway, threatening the road with flooding. In previous years, when the beavers dammed the culvert, they were trapped. But during quarantine I took on the Sisyphean task of breaking down the culvert dam on a daily basis and when that was no longer possible, building thwarting devices which I would then watch, using footage captured by a night vision camera, the beavers integrate into their dams. I eventually reached out to Jakob Shockey, a wildlife biologist and the Executive Director and Co-founder of The Beaver Coalition, through a blog post he'd written. He recommended that I read "Eager" by Ben Goldfarb which introduced me to the wide world of people working on human/beaver coexistence including a number of people working in New England. I went up to Vermont to meet Skip Lisle, the inventor of the Beaver Deceiver, and I volunteered with Massachusetts-based Mike Callahan to learn how to build the devices that I would eventually install on my family's land. Mike is the founder of Beaver Institute and Beaver Solutions. Beaver Solutions installs flow devices and culvert protection, encouraging human/beaver coexistence. The Beaver Institute runs BeaverCon, an international beaver conference, whose focus this year, Building Climate Resilience: A Nature-Based Approach, inspired the overall theme for the design studio that began with the BCD project.

The studio this spring was divided into the BCD project, followed by a longer project (not described in this submission) in which students responded with an architectural solution to the prompt "if wetlands are part of a nature-based approach to climate resilience, what does it look like if beaver wetlands are allowed to expand into the human ecosystem?"

As beavers spend much of their time in their lodges in the winter, students would be observing using pre-recorded videos posted on Youtube. One of my learning goals for students was for them to question their anthropomorphism, a difficult task but one not dissimilar from the exercise of questioning one's assumptions when observing people. I sourced from an ethnography workshop an anthropologist friend, Dr. Amiel Bize, uses in her classes. I wanted to expose students to observational research before they dove into watching the beaver videos. One of the habits of mind I wanted students to experience was the value of solo observation followed by group sharing. The first week of the course was over Zoom as students were quarantined after returning from Winter break. As students were stuck in their rooms and the weather was frigid, I found a website with open CCTV feeds for them to watch. I chose a public CCTV feed of a street in a touristy area of a city in eastern Europe. Students spent time observing on their own and taking quick notes. They were then given time to fill in their notes and then to meet in breakout rooms in small groups to discuss and compare their findings. We then met as a class, and students shared their observations. An exciting moment occurred when students were trying to figure out the role of two people dressed in period costumes. Were they buskers? Or were they hired by an-out-of-view tourist destination? Students discussed their opinions, and we had the opportunity to note that previous experience affected interpretation. After this workshop, I assigned students to small teams for the remainder of the research portion of the project.

After this initial workshop, students were introduced to the natural and human history of beavers over Zoom by Jakob Shockey from his off-the-grid cabin in Oregon (internet care/of satellite). Jakob gave a presentation on the history of beavers in North America and his work, and students had the opportunity to ask questions.

Reading secondary sources was an essential part of the research students conducted. Some of the readings were assigned, and students sourced some. The first assigned readings were "Braiding Sweetgrass'' by Robin Wall Kimmerer, which juxtaposed the stories of Adam and Eve and Skywoman, and prompted students to consider the relationship between humans and nature. Students also read a section from "Eager" by Ben Goldfarb, which outlined the history of beavers in Massachusetts and it set the stage for students to talk to one of the stars of Chapter 3, Mike Callahan.

In their research teams, students came up with three themes and, for each, three insights. From that list of nine insights, students chose three and came up with three design opportunities for each. Students received feedback from Emily Norton, the Director of the Design Thinking Initiative at Smith College. Defining an insight is nebulous; however, it's helpful to think of it as an idea or fact that is surprising, interesting, or counterintuitive, something that isn't part of the popular imagination or that you would notice from a quick inspection of something. It was tempting for students to come up with project ideas at this point but holding off until they received expert feedback was necessary to check their assumptions. In their groups, students presented their worksheets to Mike Callahan for feedback on their themes, insights, and design opportunities.

The final deliverable for Part 2 was a poster that featured diagrams, a photo of their wood shop model, a rendering of their project in place along with text explaining their project. You can see these posters in the pdf portion of this submission.

After feedback from Mike Callahan, students were asked to take their design opportunities and begin brainstorming project ideas. I assigned a chapter from "Speculative Everything" by Anthony Dunne and Fiona Raby to help students think more broadly; I wanted students to ground their work in research while brainstorming outside the realm of the possible and practical. Impractical solutions can raise awareness about an issue rather than directly solving a problem. Students spent a weekend brainstorming and came in with sketches and ideas, which we gathered together on a list. Through this, with some facilitation from me, they formed teams of two.

Students then went through an iterative process of low to high fidelity prototyping, starting with cardboard and then moving into the woodshop. Students received a short woodshop orientation in addition to one-on-one meetings with the woodshop supervisor. Because only so much was possible in the woodshop given time limitations, students received tutorials in 3D modeling in Rhinoceros 3D en route to making diagrams in Adobe Illustrator of the ideal version of their projects. Students also received training in Adobe Photoshop to create renderings and Adobe InDesign to make their posters.

Feedback and critique, from me as well as from outside voices, are central to the pedagogical process I teach. Halfway through Part 2 of this project, I arranged for students to zoom with Ian Ingram, an LA-based artist, and roboticist whose projects explore human/non-human communication.