With our future growing more uncertain, there's never been a more important time to activate and experiment with our speculative abilities. But much of the planet's design thinking is enslaved to the consumer machine—encouraging people to buy unnecessary things instead of doing things important to them—and speculative tools and information on how to apply them are scattered.

Future Scouting is a step-by-step design activity game that introduces speculative design—designing future inventions that make us rethink the direction of today—and designing for core values. Players receive a mission to design an invention by flipping cards to determine the future technology they must design for (customisable skin, 3D printing, designer memories, etc.), what interaction method the invention will be controled by (voice, sound, emotion, etc.), and what Key Value the invention must foster (e.g. kindness, security, health, etc.).

Future Scouting hopes to inspire values-driven design to steer the world toward more a preferred future, by giving designers time to experiment designing for core values instead of just for profit, and by teaching them how to speculate on the impacts of future technology on our values through a gamified introduction to speculative design.

Because why can't saving the world be fun? 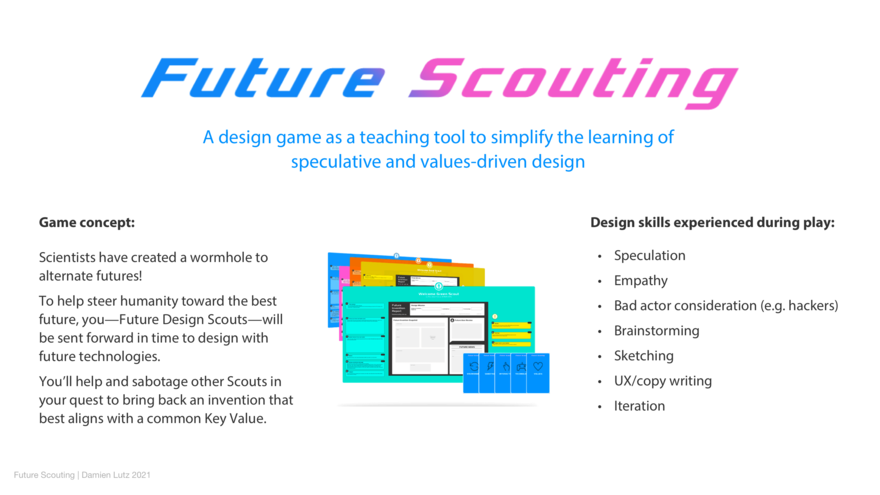 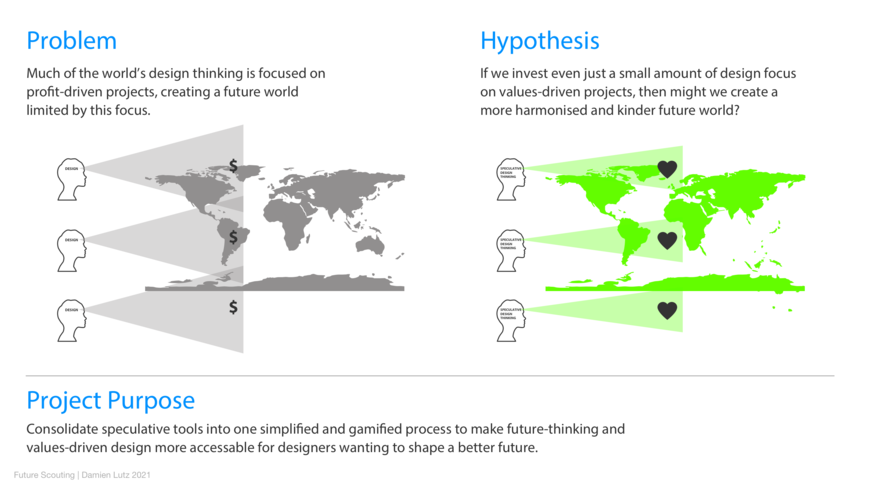 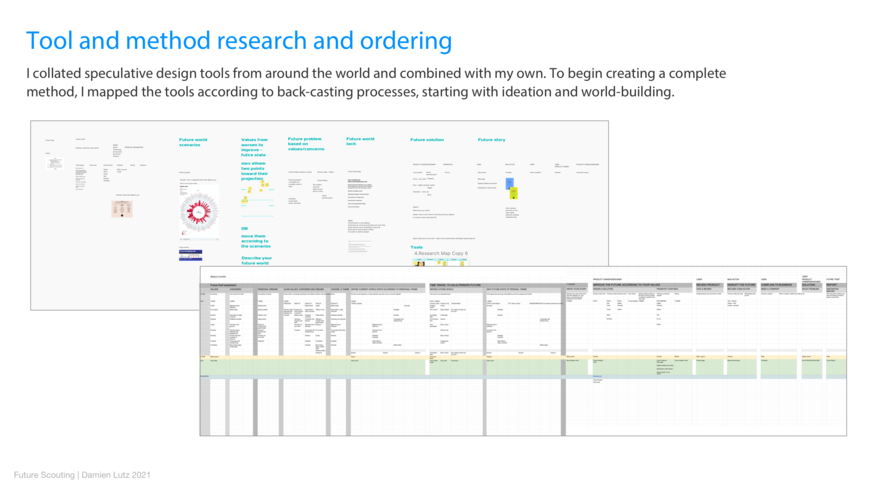 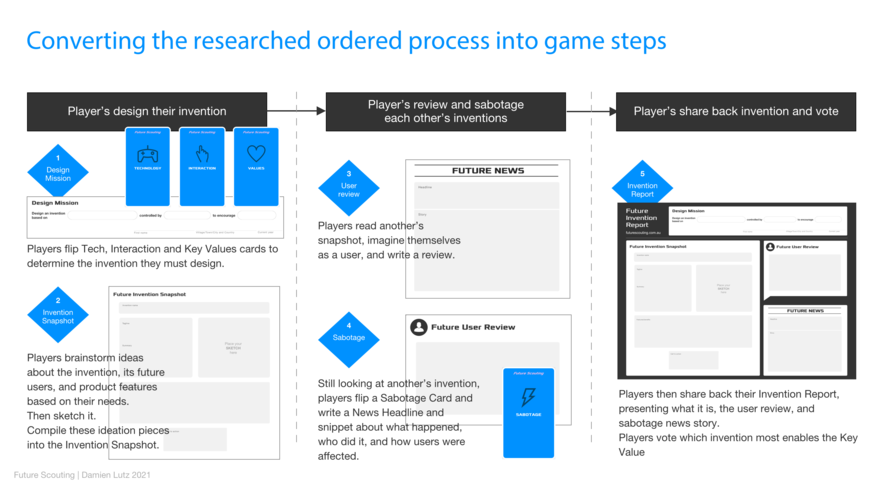 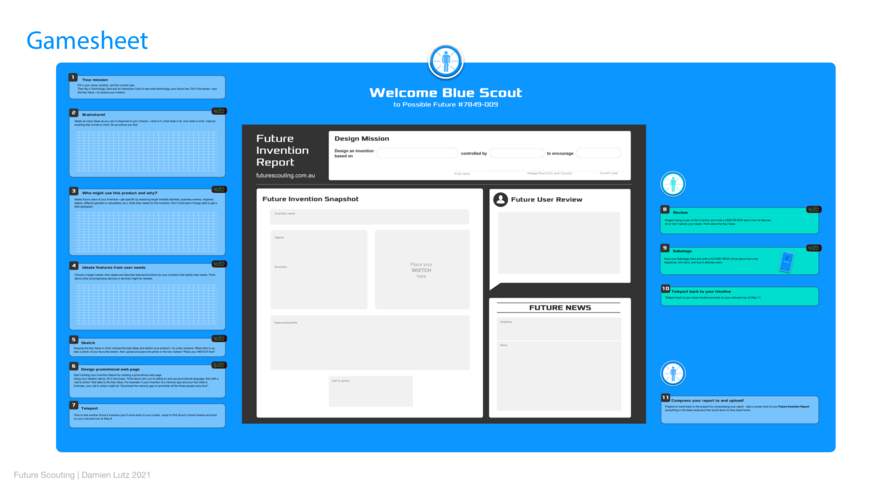 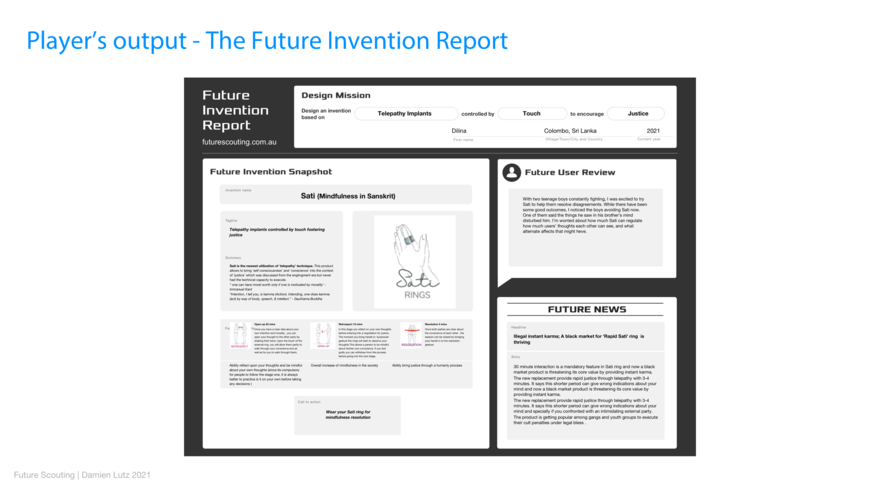 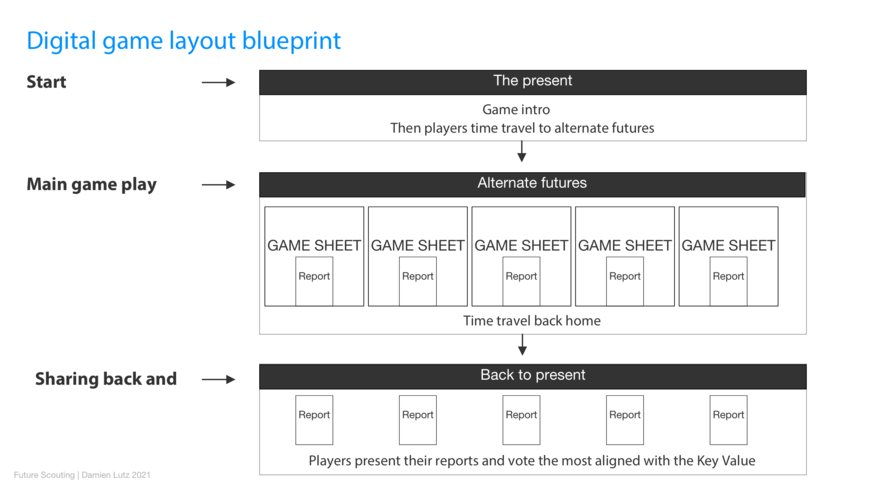 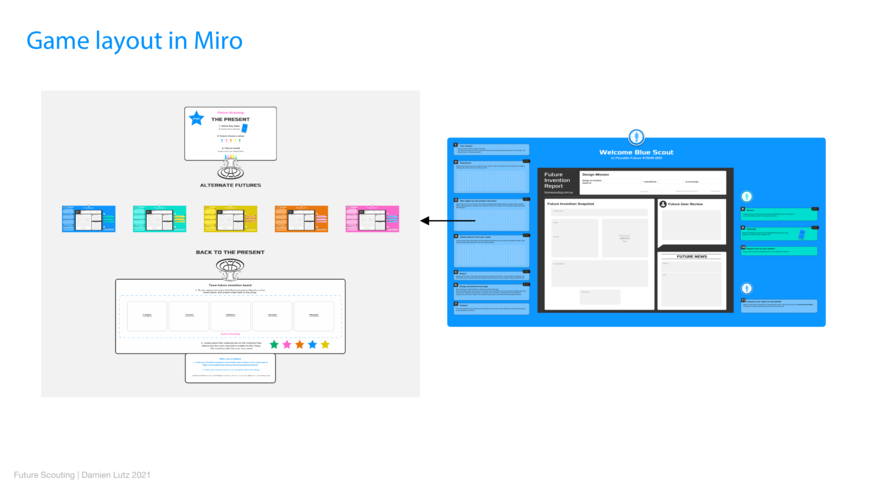 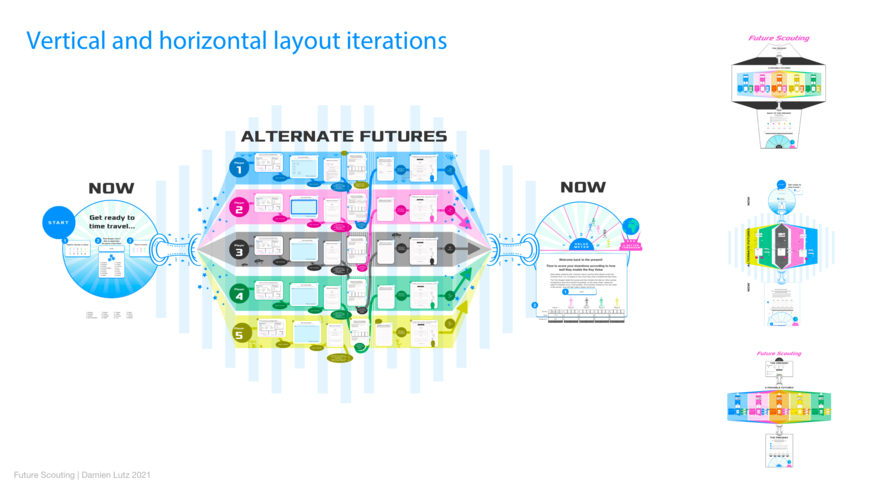 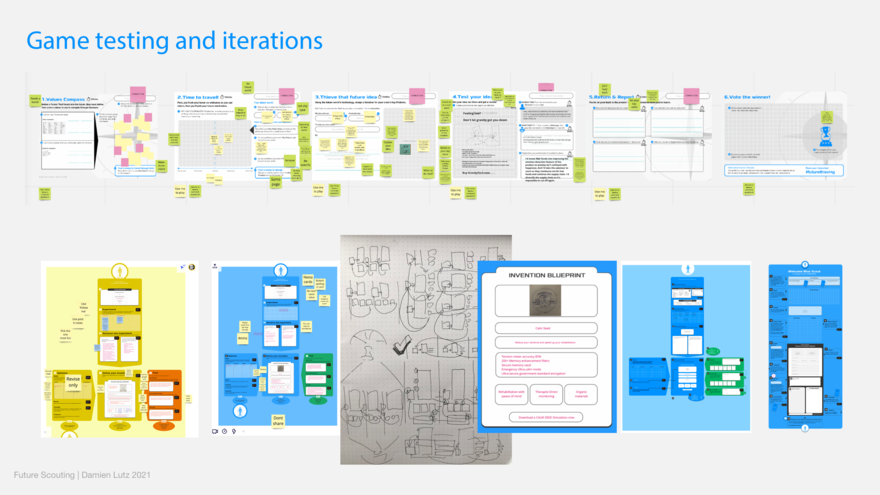 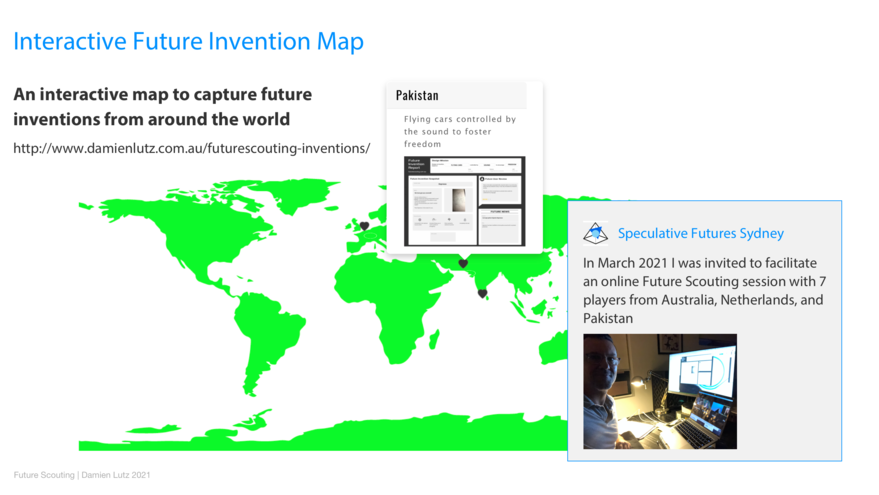 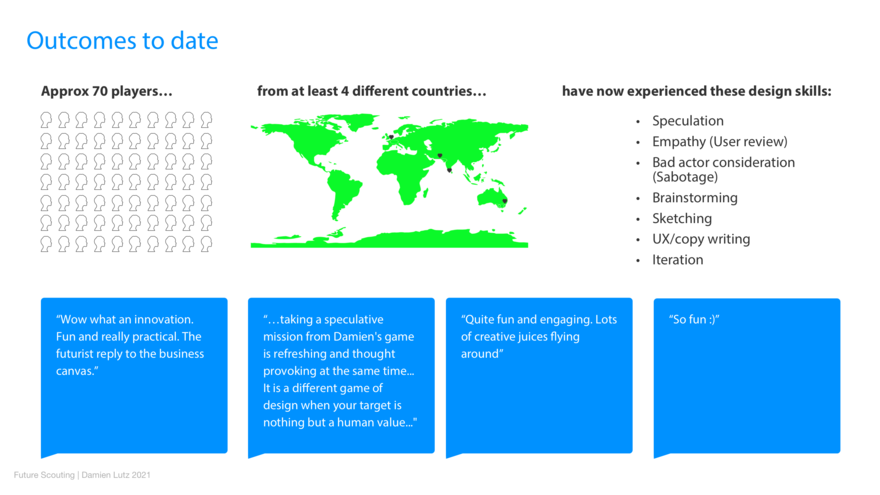 Intro Future Scouting is a design game created as a teaching tool to simplify the learning of speculative and values-driven design to assist designers wanting to shape a better future. Game concept Scientists have created a wormhole to alternate futures! To help steer humanity toward the best future, you—Future Design Scouts—will be sent forward in time to design with future technologies. You’ll help and sabotage other Scouts in your quest to bring back an invention that best aligns with a common Key Value. Gameplay The game consists of players flipping 1) a Technology card to determine the technology they will design for (customisable skin, 3D printing, designer memories, etc.), 2) an Interaction Card to determine how the technology is controlled (voice, sound, emotion, etc.), and 3) a values card for the Key Value their invention must foster (kindness, justice, peace, etc.). An example mission Design an invention that utilises designer memories controlled by emotion to foster justice. Players ideate an invention report as a prototype, and 'test' other player's inventions by writing user reviews and flipping a sabotage card to write a news story about the inventions being misused. Players than present back their invention stories and vote which one most enabled the Key Value. Number of players ?Ideally 2-5, but can be played with more or alone The elements of the game 5 coloured game sheets Online interactive flip cards Pen and paper for sketching Skills experienced during play • Speculation • Empathy • Bad actor consideration (e.g. hackers) • Brainstorming • Sketching • UX/copywriting • Iteration About speculative design Speculative design combines design with the story-telling and future-world-building techniques of speculative fiction to produce prototypes of future products or experiences. These fantastic artefacts may be in the form of a physical or digital product, video, documentary, book, manual, website, sculpture or something else. Their purpose is to generate discussion, debate, and awareness beyond projected or plausible futures, so that designers, companies, and the public not only live more aware of how their actions contribute to manifesting and hindering the future, but so they also begin to imagine and articulate their preferred futures. Founded in the challenge to dominant forces, speculative design remained a curio or unheard of to the wider design folk, but has recently experienced a rise in interest. Core values Speculative design took form in the early 1990s as a response by designers to the 1980's embrace of capitalism. Frustrated by serving a mass-market machine without being allowed a thought beyond form and function, designers questioned their role in consumerism's impact on the planet.

Project Purpose Consolidate speculative tools into one simplified and gamified process to make future-thinking and values-driven design more accessible for designers wanting to shape a better future. Project problems to solve Problem 1 Much of the world’s design thinking is focused on profit-driven projects, creating a future world limited by this focus. If we invest even just a small amount of design focus on values-driven projects, then might we create a more harmonised and kinder future world? Problem 2 The tools for speculative design were scattered far and wide, and few end-to-end methods were easily accessible (expensive courses) and/or user-friendly to designers new to speculative design (heavy in new terminology and academic language). If speculative design is condensed into a simple flow, will this engage more designers? Problem 3 Full design processes are long and have a high cognitive load. Why can’t learning how to save the world be fun? Researching existing speculative tools I collated speculative design tools from around the world and combined them with my own. To begin creating a complete method, I ordered the tools according to back-casting—starting with ideation and world-building—into a process that could be completed in one sitting, and including a step to encourage values thinking. Converting the researched ordered process into game steps I started by designing a version that could be printed out. The game steps have gone through many iterations, but began with: Step 1 - Align a technology with one of your core values (the Key Value) Step 2 - Ideate future world Step 3 - Ideate invention based on step 1 Step 4 - ‘Test’ invention by having another player write a user review Step 5 - Optimise invention from the learnings and summarise in a report Step 6 - Share back inventions Adding engagement I then used gamification to lighten the cognitive aspects: • The process was given a story—participants are part of a crew exploring alternate futures to find inventions that will create their preferred future (this story later revised) • A new step was added where players write a story about when the invention falls into the wrong hands • After all participants have designed their inventions, they vote on which one best aligns with the Key Value 1st Testing Testing the game with a designer friend yielded these directions: • Reduce cognitive load • Clarify explanations • Provide tech and values as pre-listed choices • Remove steps not necessary for the output • Rolling dice to determine the design mission worked well, perhaps start with this • Enhance the sense of competition by creating a visual rating system

Final print version In response to the testing insight, a final iteration with an enhanced visual treatment included: • Game beginning with players rolling dice to determine their design mission, reducing steps and cognitive load • The voting page became a graphical 'Value Meter'. Players rate each other from 1-10 on how their inventions fostered the Key Value—the one closest to the trophy wins • Use of pre-listed prompts determined by dice to ease steps Designing a digital version Next, I looked at creating a version that could be loaded into an online collaboration tool like Miro, which came with its own design challenges: • How to layout large game sheets in an online space for multiple players • How to layout the game so players can swap sheets mid-game (to review and sabotage each other’s inventions) So the game steps needed to change After the first iteration, testing with a different designer showed the game still had too many steps, and too much cognitive load. After removing anything not totally necessary to produce the invention report, and more testing and iterations—including making the prompts into online flip cards—the game took its final form:

Future Scouting the world Dilina Janadith, a design lecturer at the University of Moratuwa, Sri Lanka, discovered the Future Scouting game online and shared his beautiful invention. This generated the idea of capturing future inventions from around the world on an interactive map— http://www.damienlutz.com.au/futurescouting-inventions/ In March 2021, I facilitated an online Future Scouting session for Speculative Futures Sydney with 7 players from Australia, the Netherlands, and Pakistan.

Outcomes to date Approximately 70 players from at least 4 countries have experienced these design skills via the game: • Speculation • Empathy (User review) • Bad actor consideration (Sabotage) • Brainstorming • Sketching • UX/copywriting • Iteration Feedback “Wow what an innovation. Fun and really practical. The futurist reply to the business canvas.” “…taking a speculative mission from Damien's game is refreshing and thought-provoking at the same time... It is a different game of design whenyour target is nothing but a human value..." “Quite fun and engaging. Lots of creative juices flying around” “So fun :)” Next Steps I will continue to optimise the game and capture inventions from around the world, from which an analysis could be done of how location and culture might affect personal ideas of what is possible for the future.

The game has also been a starting point for the development of fun, accessible, values-driven design tools. The design process has already produced a how-to guide book (also titled Future Scouting) which guides designers through a complete speculative design method from catching signals to producing a prototype.