Neuvoir stands for "new vision," which introduces innovation to the historic sport of fencing. It is a head and neck support designed for Olympic fencers that holistically protects the users, while increasing their visibility and performance. Neuvoir is a two-piece system that consists of an entirely new, yet familiar fencing mask and protective neck brace. The innovative two-piece system includes: Fencing mask: The mask has Polycarbonate visor designed to avoid distortion and offer maximum clarity, thus increasing visibility and performance. The rear of the mask is enclosed providing protection from blade hits and concussions. Neck brace: The light-weight carbon fiber neck brace is worn underneath the helmet and works with the mask, protecting the fencer from whiplash and hyperextension of the neck. The support flexes as the fencer moves, mimicking natural body movements during combat.

The target user for Neuvoir is a competitive, high-level professional fencer. However, Neuvoir Head and Neck Support is not restricted to the professionals, but also available to anyone involved in the sport. Whether they are beginners, students, coaches, or professionals. Neuvoir focuses on three areas; increasing visibility, protecting the fencer from concussions/ blade hits to the head, and whiplash. 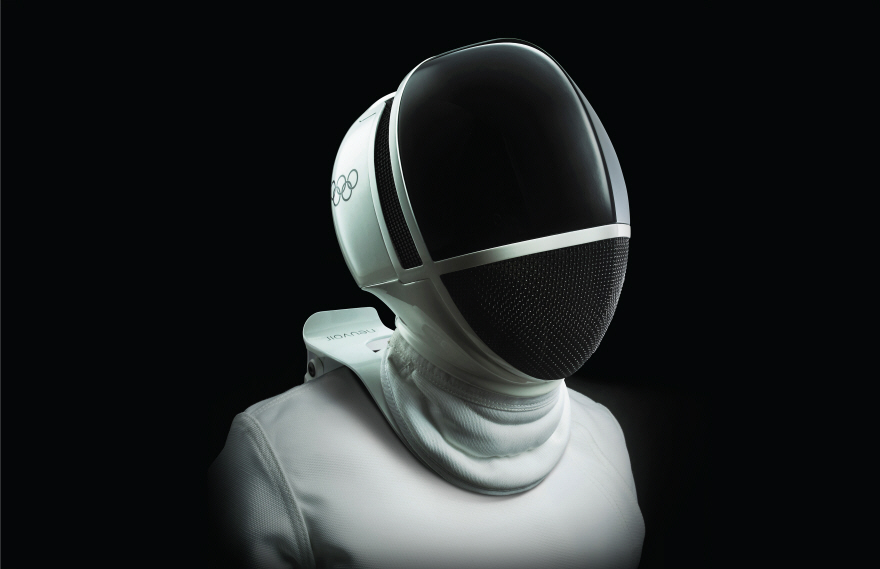 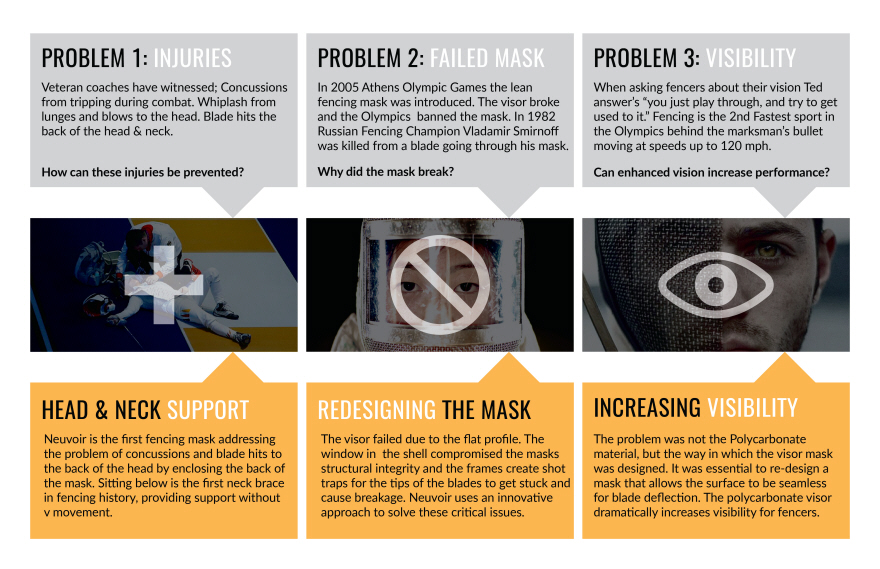 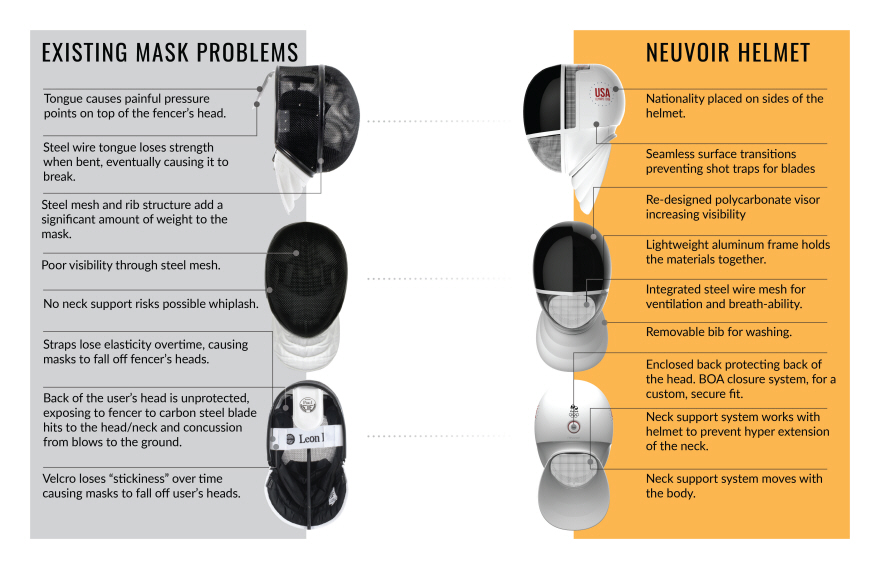 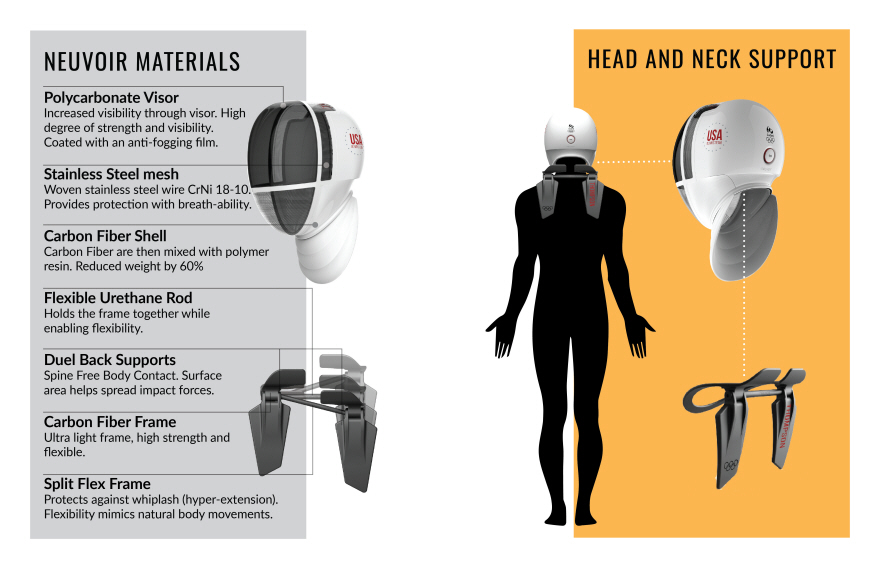 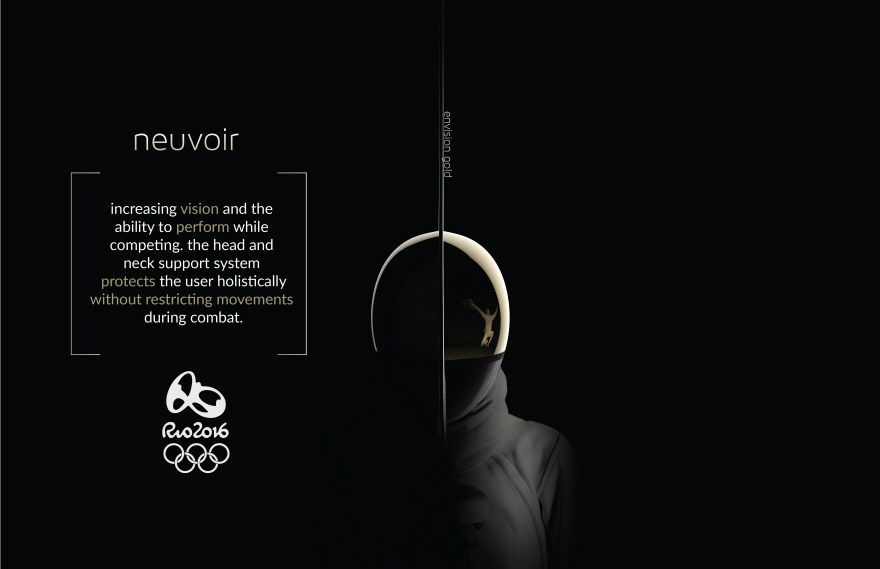 One of the biggest challenges I faced were the limitations of working under the official Olympic rules and regulations. Design parameters were set to meet the International Fencing Federation safety standards.

There were two historic milestones in fencing history that made this a unique design challenge. The first was in 1982 when Russian World Champion Vladimir Smirnov was killed by a blade, puncturing his mask. The second was in 2005 when the Polycarbonate Visor Mask was introduced hoping to add more emotion into the fencing. Although it was not fatal the mask failed during a competition and shattered the fencer's teeth. The International Fencing Federation banned the Visor Mask immediately and have been using the same traditional mask for 34 years. The challenge was to create an innovative solution to a product that's been adapted as a set standard in the fencing world for 34 years— but also re-introduce the visor, follow rules and regulations of the sport, and prove its safety. The project required a proof of concept, the ability to balance innovation with tradition, and an introduction to a completely new piece of equipment to the sport.

Neuvoir focuses on three areas; increasing visibility, protecting the fencer from concussions/ blade hits to the head, and whiplash.

The first problem was addressing the poor visibility through the steel mesh. Fencing is the 2nd fastest sport behind the marksman's bullet, moving at speeds up to 125 mph. When asking one of my interviewees about vision, he stated "It's just one of those things we have to try to get used to and play through." As a designer I saw this as a huge opportunity that needed to be addressed. Visibility is a key element in the fencer's ability to perform during competitions. The previous Polycarbonate visor masks that failed did increase vision, but why did they fail if Polycarbonate was supposed to be bulletproof? The previous visor masks suffer from multiple structural failures that can cause serious injury. I had an opportunity to interview an engineer/ astronaut at NASA and an engineer from Boeing to discuss the structural issues. The problem was not the Polycarbonate material, but the way in which the visor mask was designed. The visor has a flat profile instead of the required v-shaped 130 degree angle, which is designed to deflect the blade. The window in the shell also compromised the masks structural integrity as a whole and the frames created shot traps for the tips of the carbon steel blades to get stuck and cause breakage. When the blade is broken this creates a sharp knife point can penetrate through masks, arms, hands, and legs. It was essential to re-design a mask that allows the entire a surface seamless for blade deflection. Visors are intended to be draped formed out of 3D Optically Correct "A Class" Polycarbonate. This is a polymer with high resistance to impact, that avoids distortion and offers maximum clarity. The inside of the visor is coated with an anti-fog solution, and the exterior with an anti-scratch film.

The third problem is whiplash. This happens when fencers lunge their body forward, using all their muscle and strength to thrust their weapon forward into the opponent's mask. The result is the target's head flying back and hyperextending their neck. Whiplash causes neck pain, stiffness, loss of range of motion in the neck, headaches, and pain in the shoulders, upper back, and arms. This becomes a problem especially while competing tournament style. The neck brace was designed to prevent whiplash, limiting how far the helmet can extend back. The mask complements the neck support, the second part of this two-piece system. The neck support was inspired by motocross safety equipment preventing neck injuries. Because fencing is an asymmetrical sport the brace is designed with dual back supports, resulting in spine free contact. This disperses the energy and flexes as the fencer moves— which mimics the natural body movements during combat. The helmet and neck brace are designed using high-strength, ultra light carbon fiber. For production, moulds are sculpted from blocks of aluminum, then multiple layers of Carbon Fiber are then mixed with polymer resin into the mold cavity. Smaller parts such as EPS foam, comfort linings, bibs, vents, screws are then assembled into the products after.

The market Neuvoir intends to target is competitive, high-level professional fencers, but also is available to amateurs. In the US there are currently about 40-60K members in the United States Fencing Association club, and about 100k collegial and recreational fencers. Worldwide there are roughly 1 million fencers. Neuvoir Head and Neck Support is intended to be sold directly to the top 4-5 fencing vendors, then distributed to fencing clubs around the world.

To ensure top quality, Neuvoir head and neck support is designed to be used for no longer than two years. After the two year mark the mask is returned to the company and replaced. Because Neuvoir has so many different materials such as Polycarbonate, Steel, Aluminum, Carbon Fiber, Kevlar, and Polyurethane, the products are analyzed then components are either reused or disassembled and recycled.

Swordplay has been practiced for thousands of years, modern day fencing began as a form of military training and became a sport around the 15th century and fencing was included for the first time at the 1896 Games in Athens. Neuvoir Head and Neck Support introduces innovation to the historic sport of fencing. The head and neck support is designed for competitive, high-level professional fencers, protects them holistically and increases their ability to perform.

Liked the combination of materials and strong design execution as well as careful identification of the problem and opportunity.