The Mirion AccuRad™ is a handheld Personal Radiation Detector (PRD) designed for law enforcement, fire rescue, and other emergency responders to search and find illicit man-made radiological threats for interdiction and response. Designed to be carried on a first responder's tactical belt or webbing, the AccuRad PRD automatically detects radioactive and nuclear sources, alerting the user when a threat is detected, triggering selectable audible, visual and/or vibration alarms.

The AccuRad PRD is an industry first with "on-the-move" localization technology for directional source pinpointing, using a built-in radar screen to detect the radioactive material's direction so you can and locate trouble faster. Built to be discrete, the AccuRad PRD is also the first PRD to have dual displays with an easy-to-read top-screen enabling users to glance at a reading without removing the PRD from their belt, preventing unwanted curiosity and fear among people in public spaces. 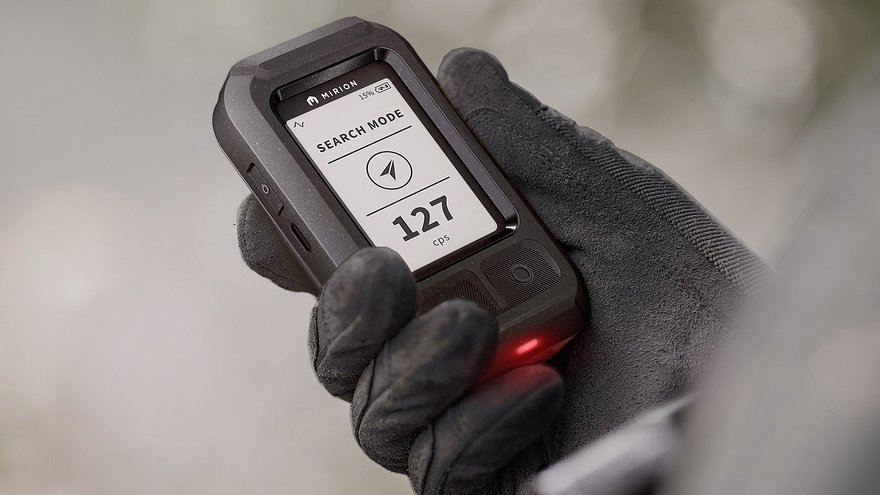 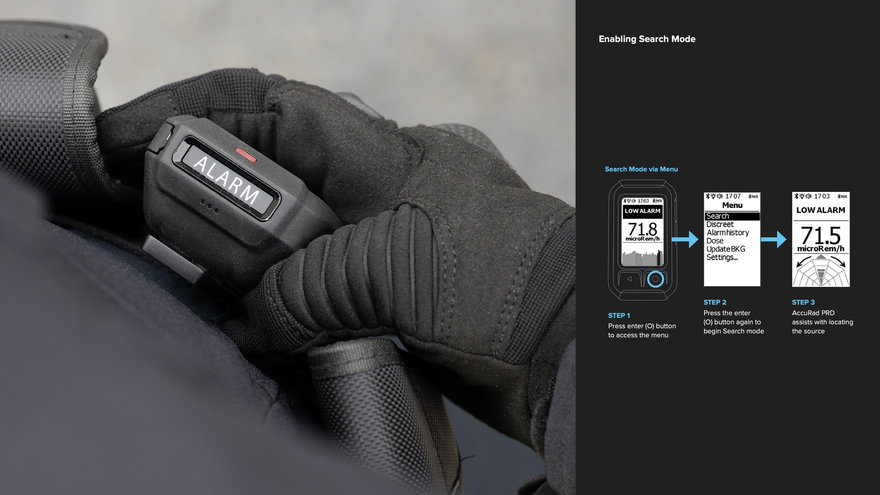 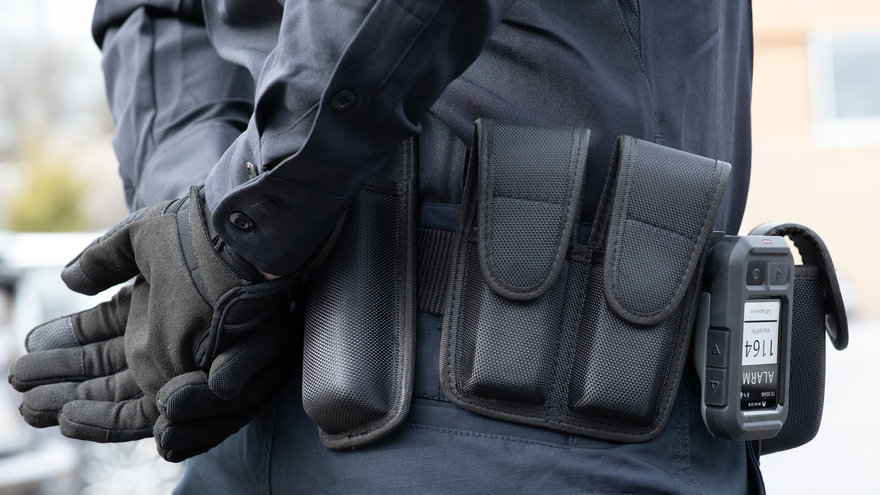 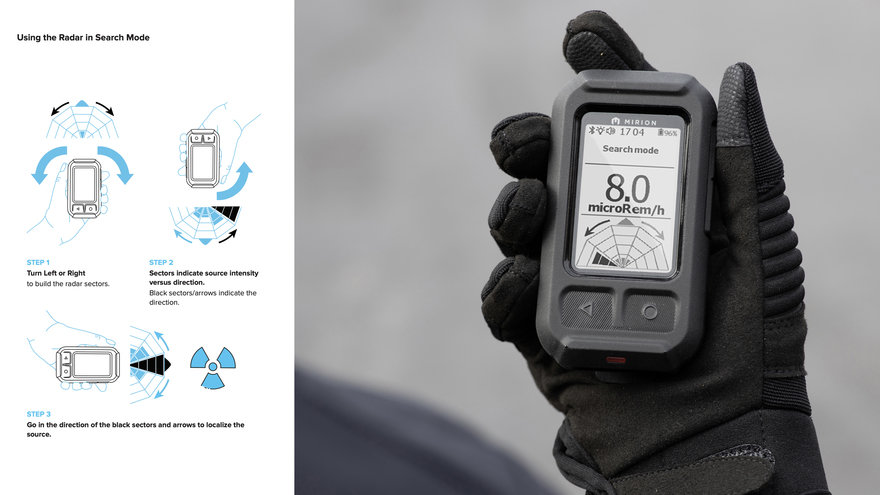 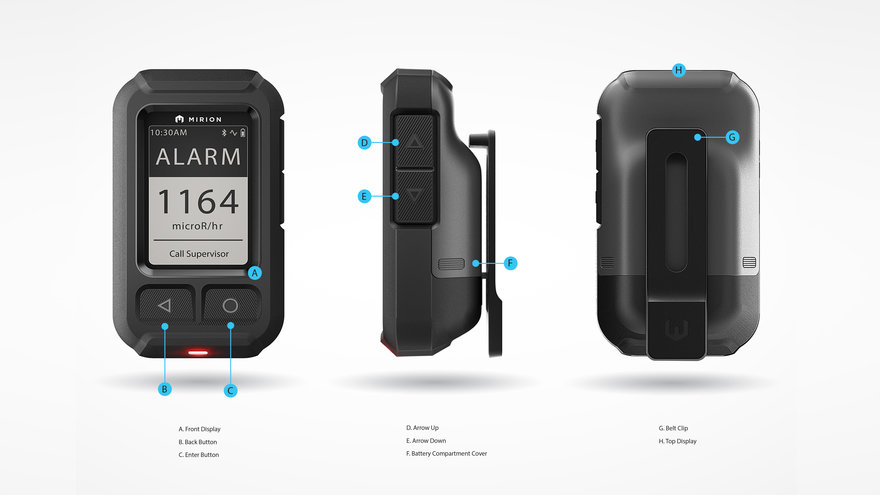 The AccuRad PRD is the first PRD ever to have directional radiation detection built-in to the device. Before the AccuRad, First Responders had to hold a PRD in both hands, pull it into their chest, use their own body to shield the device from the radioactive source, and walk in small circles to determine its location. This required significant training and resulted in high volumes of false positives, with end-users not locating the source. A new proprietary "on-the-move" localization algorithm was developed, enabling intuitive source search. To make this intuitive to use, we created a first-of-its-kind built-in radar screen. Using the "Search" mode while holding the AccuRad device by hand, the user can view the Radar screen for directional assistance in localizing the source in a wide/crowded environment. Training load for First Responders has been significantly reduced, and the overall effectiveness of in-field source location increased.

The AccuRad PRD is designed to be discrete and is the first PRD to have dual displays. An easy-to-read top-screen enables users to glance at a reading without removing the PRD from their belt, preventing unwanted curiosity and fear among people in public spaces. We made the device easy to operate with little training, removing unnecessary functionality, and increasing the displays' size for easy reading at a glance in high-stress situations. The user interface information was kept large and minimal, with units spelled out instead of represented by cryptic symbols only experts understand.

We spent hours in the field with First Responders, observing them and shadowing them to understand their exact needs and frustrations. Three (3) critical Ideal User Experience principles became apparent: Foolproof, Discrete and Durable.

FOOLPROOF. We focused on reducing the complexity of the physical/digital interfaces compared to competitor products, adopting a flat hierarchy so users could intuitively work through a set of tasks quickly and easily in high-stress mis­sion-critical moments without error. We made selection options explicit and clear, enhancing legibility and readability to improve the interface's usability for easy operation with minimal to no training. All of the device's functionality is accessible within two clicks and presented on an oversized display screen for error-free reading.

DISCRETE. Discretion in the field is critical for preventing unwanted curiosity and fear among people in public spaces. We designed the AccuRad PRD to be the first to have dual displays with an easy-to-read top-screen display, so users can glance at a reading without having to remove the AccuRad PRD from their belt or pocket.

DURABLE. Durability is critical for First Responders as PRDs regularly face frequent drops, rough handling, and harsh conditions. We designed the AccuRad PRD with an innovative heavy-duty bi-material overmold for impact-resistance instead of incumbent PRD's that use a secondary rubber sleeve for protection that is prone to stretching and snapping. The AccuRad is rated IP-65 for resistance to dust, sand, and moisture with durable port covers, protected screens, and impact bumpers.

The AccuRad PRD is Mirion's first-ever product launch in the Personal Radiation Detector category targeted explicitly at First Responders through human-centered design. It immediately established Mirion as a design leader in the PRD category against incumbents Polimaster and Thermo Fisher. The impact on Mirion's business has been significant. Since its launch, the AccuRad secured forty-three (43) new accounts in the first twelve months, including the US Capitol Police, The Los Angeles Police Department, and the US Army Research Laboratory. It also won 50% of the $121MM contract for the Securing the Cities (STC) program, a five-year program funded through the Department of Homeland Security Domestic Nuclear Detection Office seeking to reduce the risk of a successful deployment of a radiological/nuclear terrorist weapon in US cities. Mirion has exceeded its goal of achieving a 10% market share and top-line revenues of $4.5MM a year. Design Thinking and Human-Centered Design have been central to this success. It is the first time Mirion directly engaged its end-users as co-creators in the new product development process. Before the AccuRad PRD program, their radiation experts designed products at Mirion, a technology-led approach that resulted in products that were unusable and not based on a validated market need. Launching a differentiated and successful product strategy relies on a solid understanding of the market, consumer, and competitive situation. Design thinking brought the empathetic mindset and understanding Mirion needed to be successful entering this category for the first time.

Radioactive materials are duality exemplified. On the one hand, they are immensely valuable resources that can be used to better the human condition, from keeping the lights on to curing cancer. On the other, emitters of energy – odorless, colorless, and naturally harmful to life. The AccuRad PRD is one of the first lines of defense protecting society and First Responders from the dangers of radiation, specifically from a terroristic threat. Terrorism has a profound impact on society through the increasing prevalence of psychiatric disorders that emerge after an attack, such as acute stress disorder (ASD) and, in an even smaller percentage, severe conditions such as post-traumatic stress disorder (PTSD). Early detection and vigilance through radiological and nuclear interdiction efforts at border crossings, checkpoints, public events, and critical infrastructure surveillance are the key to prevention and contribute to significantly reducing the overall health burden resulting from terrorism.

A critical but unserved need was that the PRD needed to be discrete. Society has an irrational but understandable fear of radiation, rooted in nuclear weapons' terrible power. Being discrete is critical for preventing unwanted curiosity and anxiety among people in public spaces. Reducing the need for First Responders to hold the device at all was optimal. So, we incorporated an easy-to-read top-screen display, so users can glance at a reading without having to remove the AccuRad PRD from their belt. Built-in discreet mode silences alarms were also incorporated, providing an even greater level of stealth operation.

The aesthetics of the AccuRad PRD were informed directly by the in-field co-creation sessions with First Responders. Discretion was the critical driving value for end-users, with a desire for a rugged and texturized yet minimal design. We designed the AccuRad to be "Field Tough" so it could take a beating with an impact-resistant TPE over-molded body made of LEXAN polycarbonate and CYCOLOY capable of withstanding frequent drops. The clamshell construction offered a simple and elegant sealing strategy to meet the IP67 standard for resistance to dust, sand, and moisture and easy access to the AA batteries powering the device. The PRD had to blend in with existing tactical gear, striking a balance between looking and feeling durable but being minimal and discreet. The First Responder world can be chaotic and intense, so we developed a form language rooted in simple geometries, relying on symmetry to telegraph simplicity, purposefulness, and ease of use – helping to reduce tension and provide a sense of order. Gloves are frequently worn in-field, so we designed the AccuRad PRD with a one-handed gloved operation in mind. We Simplified the overall functionality of the PRD with fewer controls. We configured the device with big, easy-to-press buttons with fine tactile grips, chamfered edges, and indented surfaces to maintain a high degree of tactility and sensory feedback despite wearing gloves. Exaggerated bumpers were fused into the overall form for a more minimal, sleeker appearance but still telegraphing professional-grade with a tactical matt black finish.