As designers, we can influence how the world is shaped. Therefore, gender equality is essential to consider when designing products and systems.

"Our widely adopted, unisex design approach, that uses the standard (western) male, to design our spaces, cars, and algorithms is letting women down. It has led Google Translate to believe "doctor" is male. It makes women 47% more likely to get seriously injured in a car crash, and it enables voice recognition software to 70% more accurately recognize male speech than female speech."

Male bias is rooted in our society; however, it is the twenty-first century, and it is time to recognize the potential and independence of women. They are doctors, police officers, and firefighters. Let us change the design process accordingly and design for all! Diversity in design teams is essential to have, to develop better products. Having people of different backgrounds on a design team allows us to uncover hidden biases and break social norms. The more diversity on a team, the fewer knowledge gaps we have.

As a designer, I wanted to explore and investigate male-dominated occupations for my fourth-year capstone project to see how they provide personal protective equipment (PPE) for their female workers. Many female officers on active duty work at the frontlines to protect our communities. Unfortunately, their body armour is designed for 'standard' male bodies. Wearing these vests can be uncomfortable for women as it is ill-fitted and raises significant safety and health issues. It can leave more extensive areas of the body unprotected, hindering movement, and putting strain on organs in the female body. 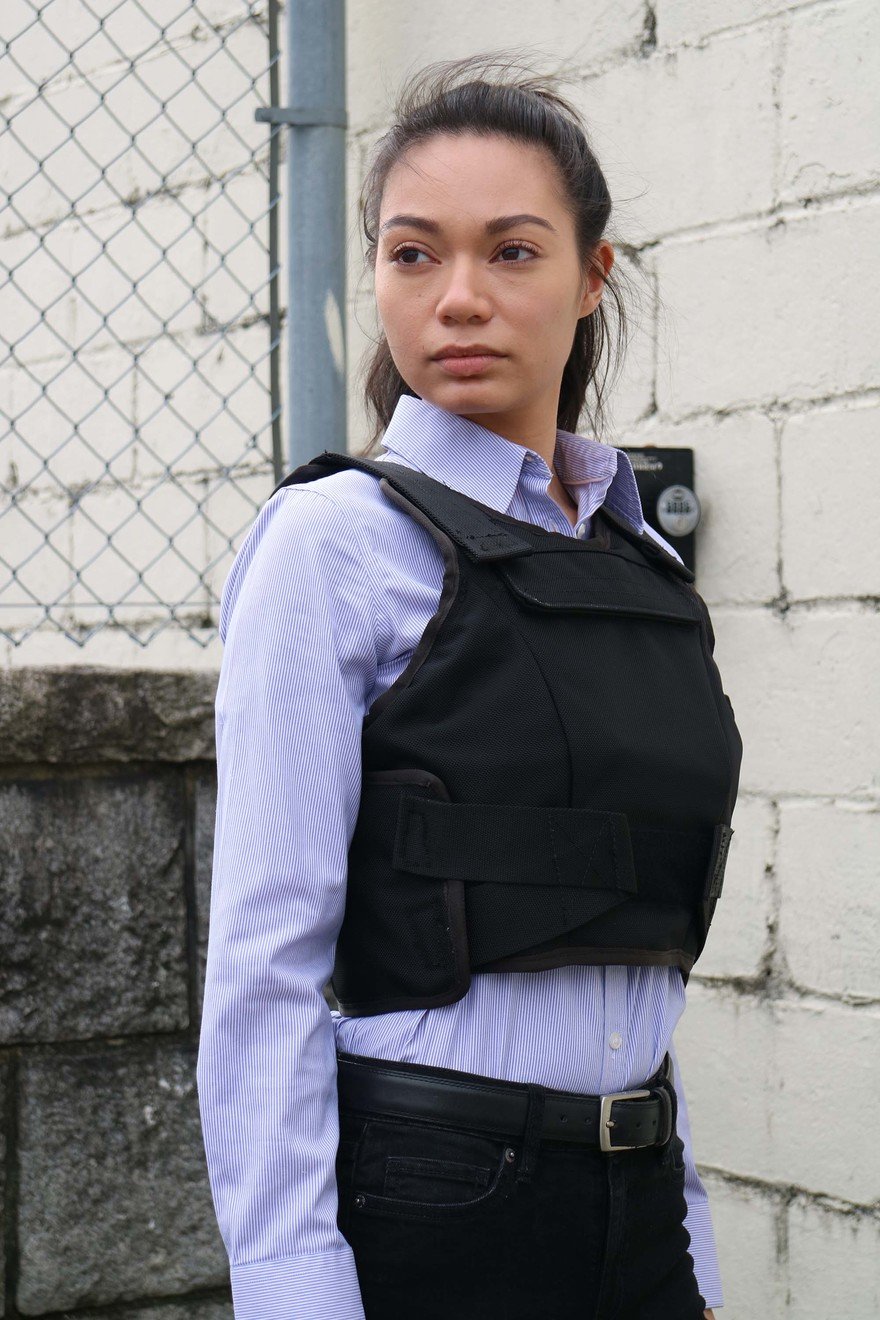 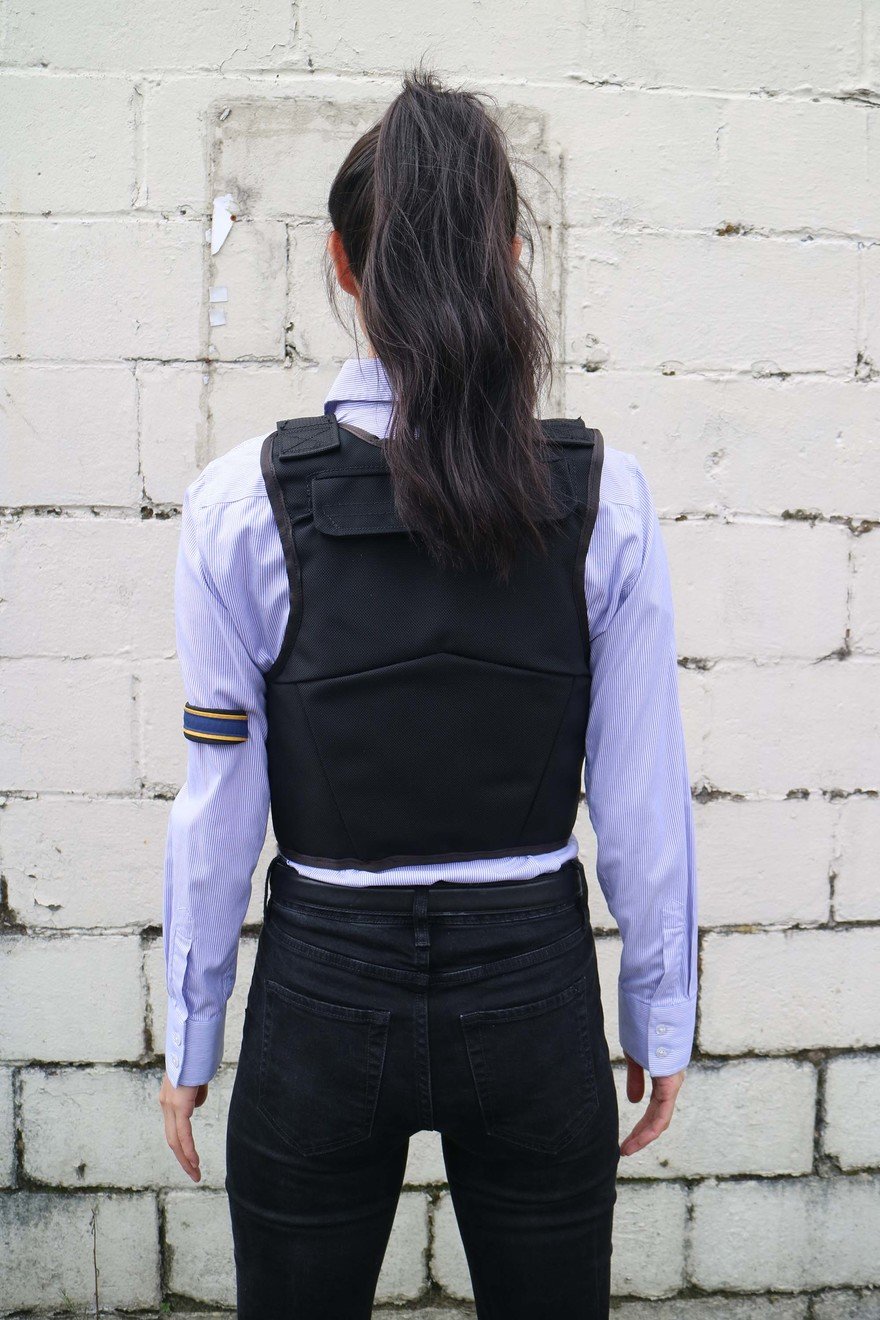 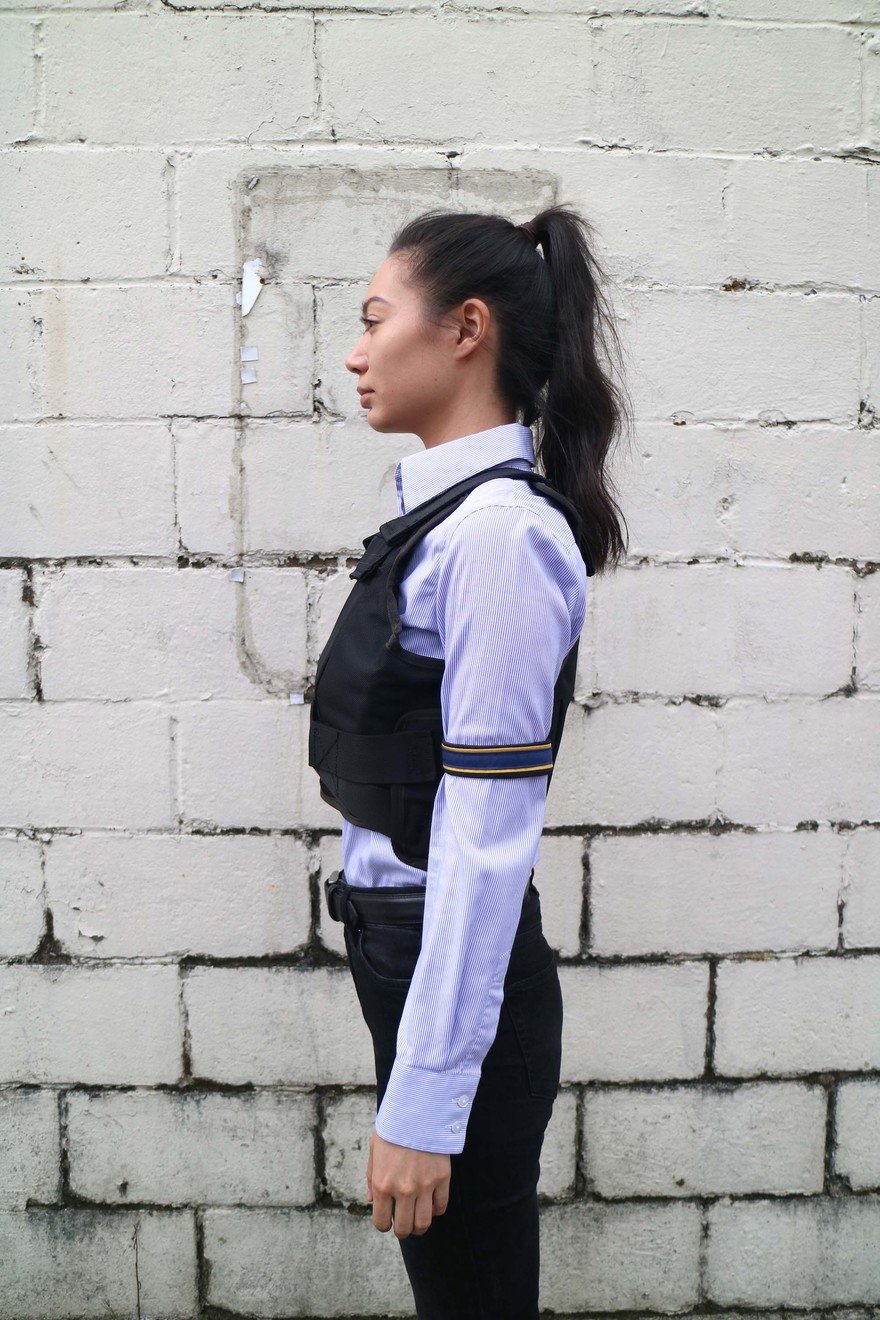 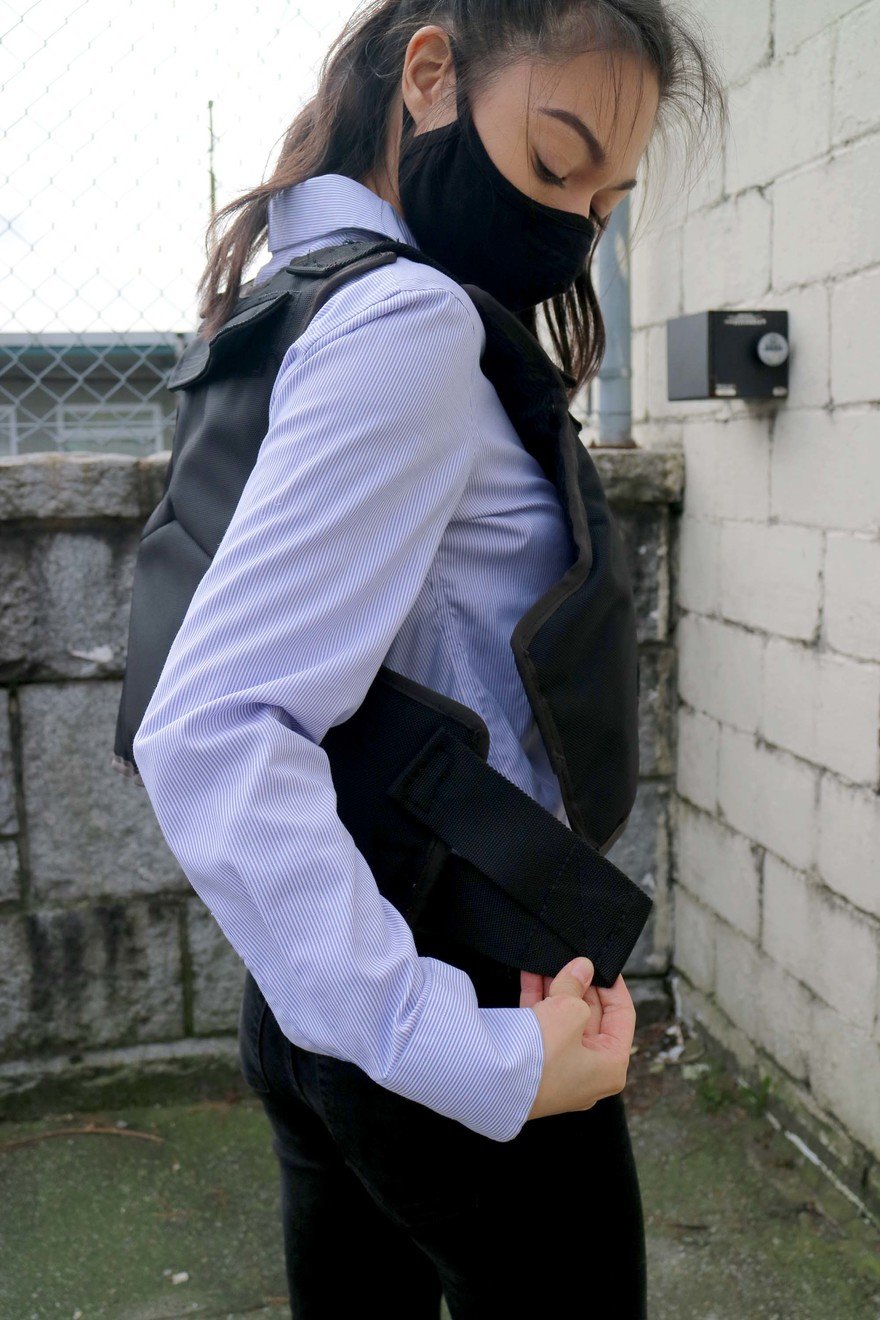 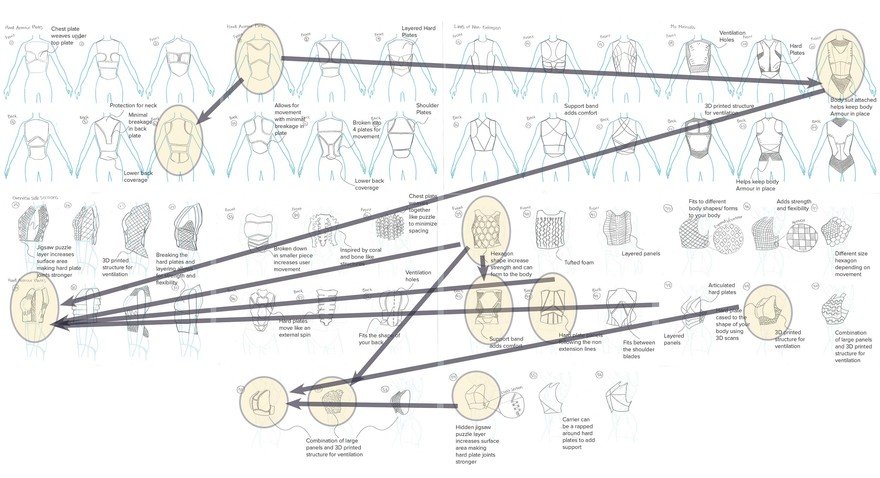 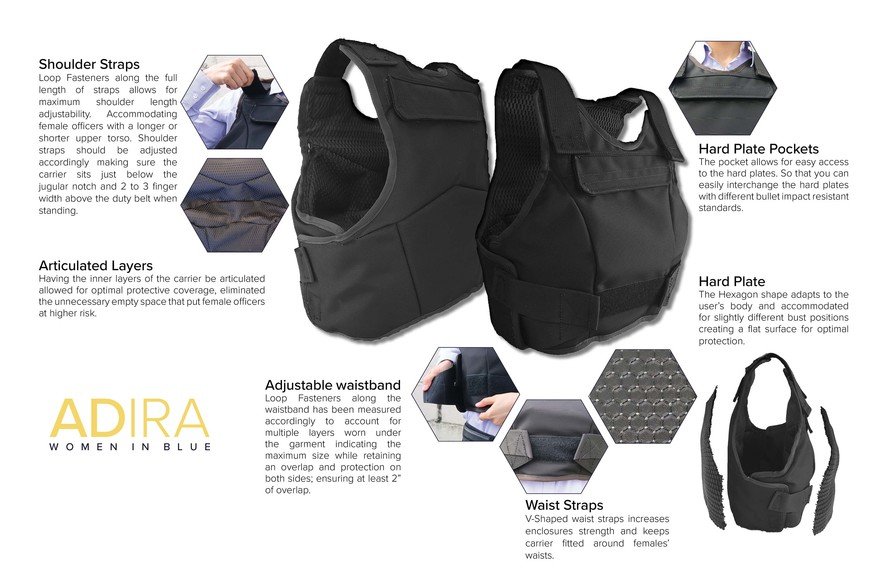 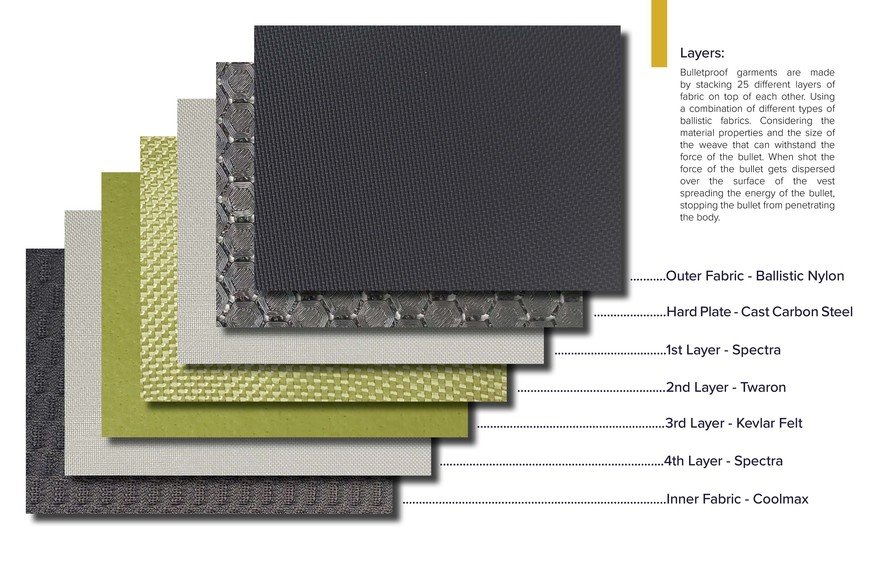 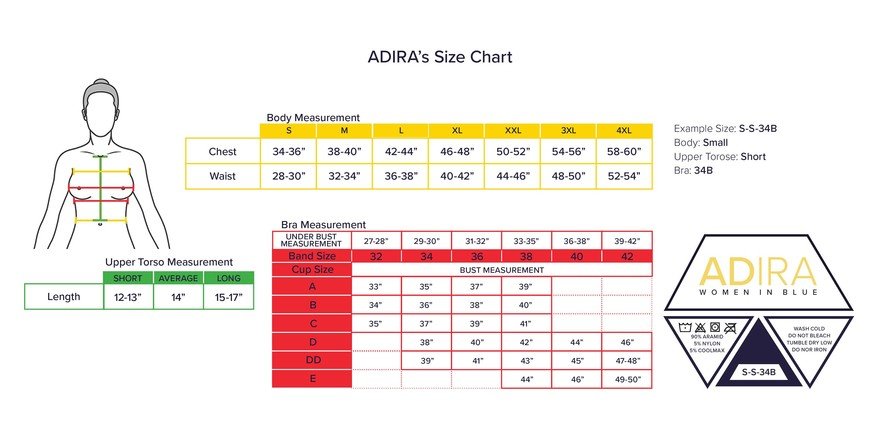 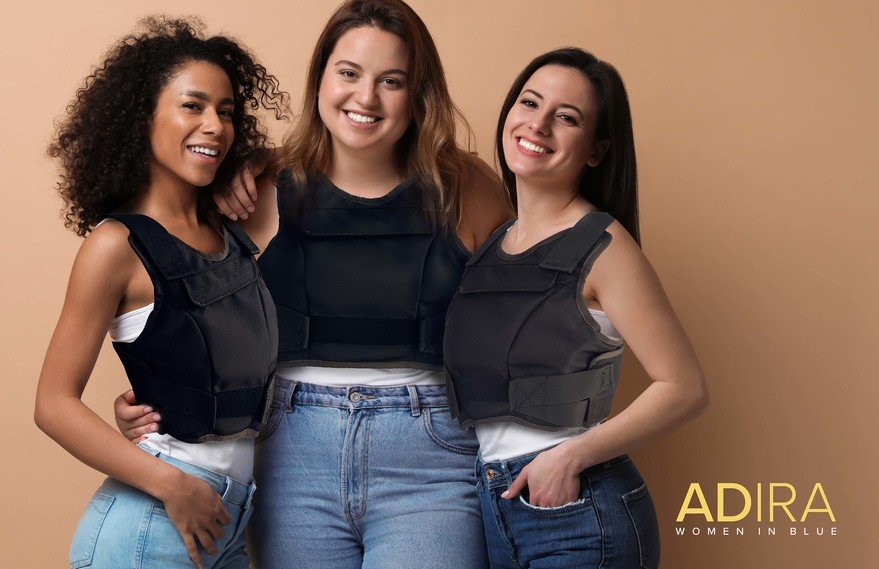 Male bias is firmly ingrained in our society that it has created this perception that females should not be officers even though they passed both the written and physical exams. Due to this, female officers act stoic and more aggressive for the public to perceive them as capable and comply with their orders. Female officers had reported that "citizens would ask when the 'real police' would arrive when [female partners] responded to a call" (National Institute of Justice Special Report, 2019).

When female officers were first recruited for regular police duties, they faced backlash. Not only did their male counterparts not want to work with them, but their wives complained too. Many female officers would have trouble depending on their male partners because they did not know if they could rely on them. Several officers said they nearly left law enforcement because of this. "No one valued [them] on the job. [They] teach police officers that everything is a threat. For women, not only can they not trust the people they [are] policing, but they also can [not] trust the people who are supposed to have their backs." (National Institute of Justice Special Report, 2019).

On top of that, female officers would deal with harassment. They deal with it so regularly that it has become "normalized" to a point where they do not consider it harassment. It is just part of the work environment. "A lot of the things [female officers] experience would be considered harassment in another field" (National Institute of Justice Special Report, 2019). Over the years, there have been progressive changes regarding these issues, "yet, female officers are still fighting the same fights as the previous generation (National Institute of Justice Special Report, 2019)."

When it comes to personal protection equipment (PPE), police branches supply their female officers with a male small or what they classify as unisex. Wearing the wrong size PPE can be life-threatening, especially when working in a high-risk environment.

Police officers are exposed to a high-risk environment that may fail to return home while on active duty. Looking into crime reports of officers killed while wearing protective armour, it was reported that upper torso wounds are the second most at-risk part of the body after head wounds. They broke down the cause of deaths in the upper torso to 51.2% between the vest panels, 26.8% above the vest panel, 17.1% of rifle or handguns that penetrated the vest, and 4.9% from the back or below the vest. "One thing is certain: armour that is guaranteed to fail to protect the wearer is the armour that is not worn at all" (U.S. Department of Justice. 2001). Officers should always wear their body armour while on active duty because you never know when a situation can escalate. That is why we must design body armour to fit correctly, increasing the comfort level encouraging officers to wear their PPE for more extended periods.

Currently, the vests comply in two parts. It includes a flexible, durable garment made with Kevlar and a hard plate inserted within the vest. The hard plates that are currently "available for police officers fit female bodies in such a way that extra space is exposed at the chest as breast tissue pushes the flat plate away" (West, 2019). The design is problematic as the space causes back and spinal pains and "exposes vital organs and increases the possibility of a fatal shot" (West, 2019). With more women joining the police force, it is time that body armour is designed to accommodate the female anthropometric form. Doing so will enhance the fit and performance of female police officers. Body armour needs to be comfortable and inclusive to officers of all shapes and sizes.

This project uses a design thinking approach. The process includes extensive research, exploration, and testing to ensure validation in the final design. I wanted to design body armour that would enhance the fit and performance of female officers to ensure their safety.

The design process behind ADIRA involved extensive experimentation and testing in providing proof of concept. The early stages included broad academic research and multi-stage prototyping. Looking into the anthropometric form and the anatomy of female organs in the upper torso insists on enhancing the performance of female police officers. Once I laid the groundwork, ideation began with sketching and half-scale three-dimensional prototypes. I explored both aspects of body armour, including the hard plates and carrier.

For prototyping purposes, I followed the ASTM standard 5585 body measurements for adult female "misses" figure type using the measurements of the 60th percentile female. Keeping in mind that each female is proportioned differently, I came up with a custom measuring system for this garment throughout this process. Prototypes were evaluated at every stage using a design evaluation matrix and assessed for form, function, and design features. The information from these tests influenced the resulting prototypes and design direction.

Once confident in the construction method at half-scale, full-scale prototypes were created, allowing for user testing. Prototypes needed to fulfill functional requirements, which included: durability, fits the anthropomorphic characteristics of the female body, air circulation, lightweight, and user friendly. Testing of near-final prototypes was conducted in-person through fit, comfort, movement analysis, and computer simulation, which provided key insights that informed the final design.

When designing the hard plates, I took inspiration through biomimicry, looking at the interlocking structure of the diabolical ironclad beetle, fish scales, and chain-like structures. An interlocking structure would increase the surface area, allowing a moving bullet's force to be distributed equally, creating a strong structure that would benefit the construction of body armour. Through computer simulation, I tested these complex structures to see if they could withstand the force of a moving bullet and fulfill the NIJ standards – 0101.03 for armour classifications of type 1 body armour.

Considering the cleavage lines and lines of non-extension in the end, I was able to design and produce body armour that enhances the fit and performance of female police officers. Providing optimal protective coverage maximizes mobility and fits female officers comfortably. Allowing officers to complete their tasks and not worry that they are wearing an ill-fitted PPE. Each size comes with three variable measurements, capturing females' body, upper torso, and bra size creating a diverse custom product.

ADIRA is a Type 1 Classified Body Armour for female police officers. Providing optimal protective coverage, maximizes mobility, and fits female officers comfortably. Allowing officers to complete their tasks and not worry that they are wearing ill-fitted personal protection equipment (PPE). Studying the anthropomorphic characteristics of female bodies, I was able to design and produce body armour that enhances the fit and performance of female police officers.

ADIRA's sizing chart considers three different measurement categories: the body, upper torso, and bra size, following the industry standers for each category. Including this in-depth sizing chart in my design was necessary because one size does not fit all. We must design for all shapes and sizes. It is crucial that when working in a high-risk environment, these primary users can purchase body armour that fits their bodies correctly. These three different measurement categories ensure more variation in sizing, and female officers can receive a garment custom to each user's body.