Four Dioramas installation was designed by NEMESTUDIO as part of "Architecture as Measure," the physical exhibition of the Pavilion of Turkey at the 2021 Venice Architecture Biennale. The installation consists of four dioramas and was on view in Venice between May - November 2021. The installation provokes a renewed planetary imagination in the context of climate emergency by looking at the politics and nuances of the seemingly mundane aspects of architectural construction and juxtaposing these aspects with their planetary dimensions, such as geographies of resource extraction and material supply chains, maintenance, and care.

Each diorama stages both a generic site of architecture with banal details and a specific mise-en-scène of an imaginary story taking place in Turkey. Each diorama consists of a large backdrop drawing by NEMESTUDIO, which provides a visual depth to the depicted scene.

Four Dioramas depicts a story about multispecies survival and solidarity. Through archeology of an imaginary future that takes place in Turkey, the story reflects on some of the environmental controversies of our current moment.

Visitors can walk inside the dioramas as if they are in the interior space of an architectural model. As the dioramas collide the architectural and the planetary, the banal and the spectacular, and the everyday and the mythical, ideas of foreground and background are constantly flipped and negotiated.

As opposed to the usual ways dioramas are used in natural history museums, which present nature as an ideal and "uncontaminated" condition devoid of human exploitation or controversy, the dioramas in this installation display messy stories and controversies of resource extraction, waste, and environmental injustice in the Anthropocene. In this way, the notion of nature as an ideal condition is demystified and denaturalized. By doing that, the installation asks the question: what kind of stories will the dioramas, as new models of the Anthropocene, tell in the future?

Also, by allowing circulation inside the diorama stage, the notion of an idealized nature is debunked further. In this stage, when the visitors are inside the dioramas, they become part of the living image, the staged tableau, or the new drama of a yellow Earth. They now view the exhibition space from the inside out and have to decide how to be situated within this drama.

In the installation, the diorama typology works as a slow media to conflate the planetary and the everyday experiences through aesthetics and storytelling. Instead of conceptualizing the architectural exhibition as a visualization of research content, the installation uses the details and the aesthetics of oversized architectural models and drawings as a storytelling device to instigate curiosity and engagement. 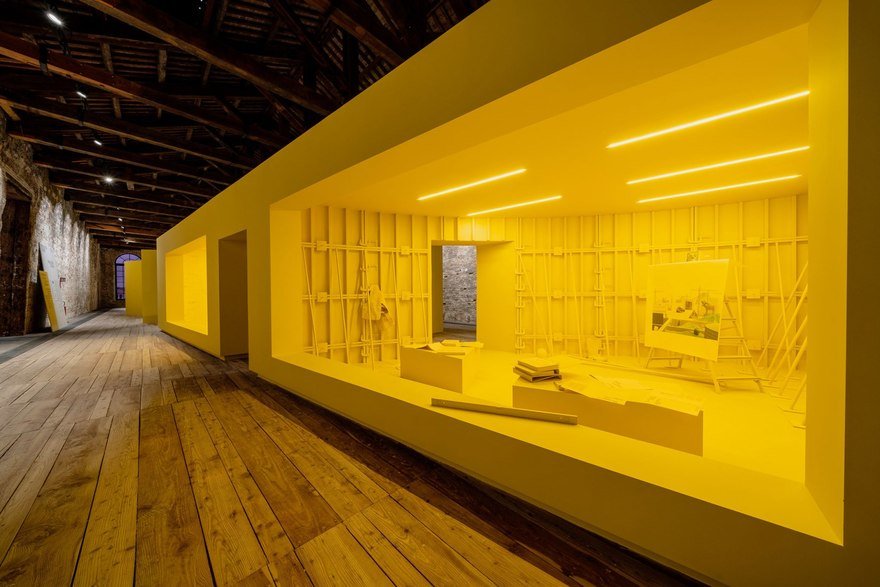 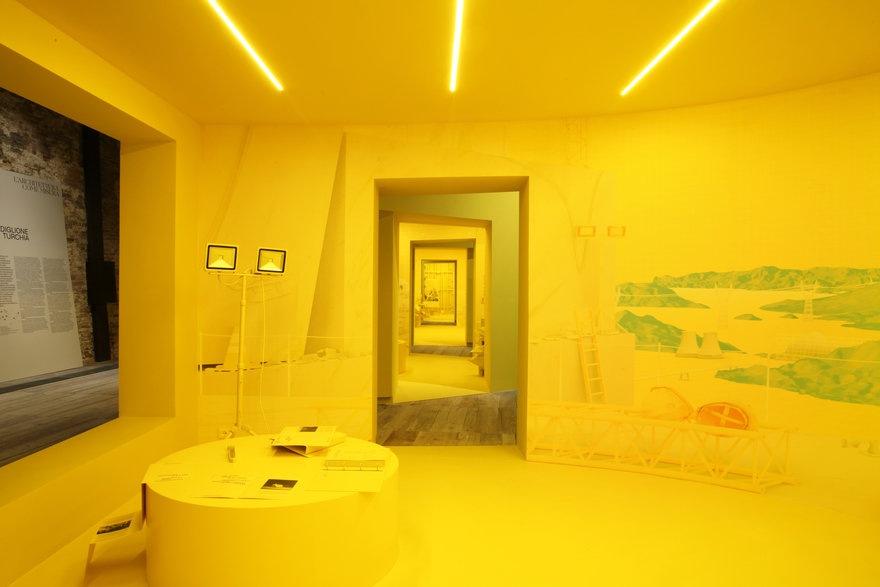 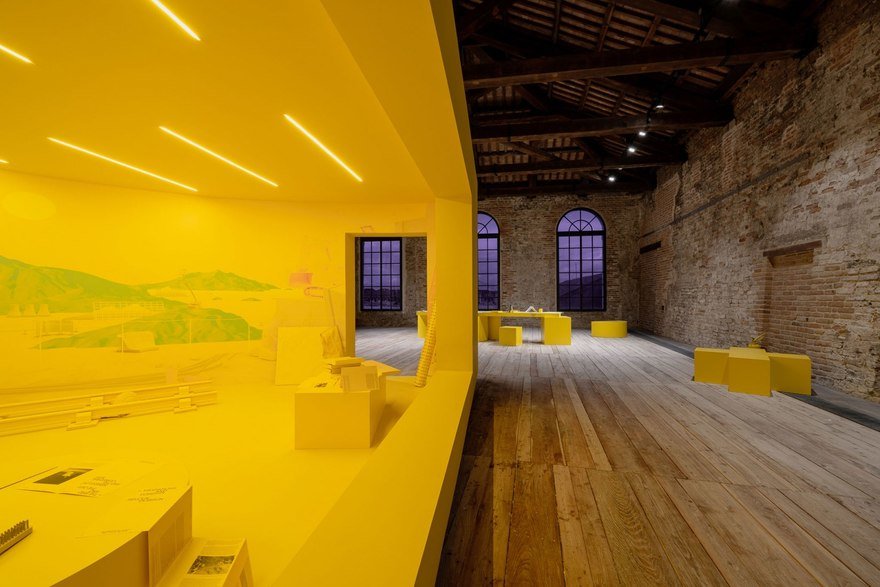 Through the Diorama of Quarry. Looking from the diorama to the exhibition space. NEMESTUDIO, Four Dioramas, 2021. Photo by: Andrea Avezzù 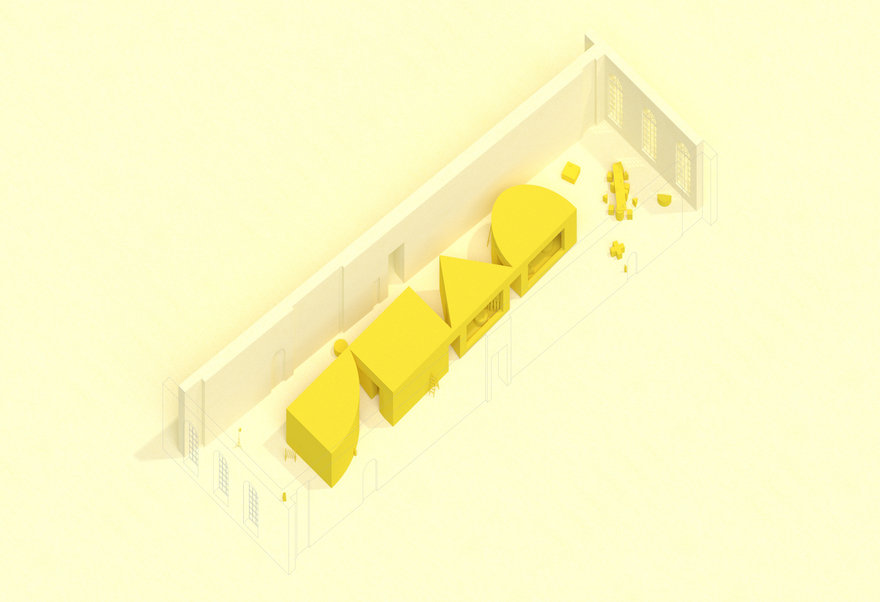 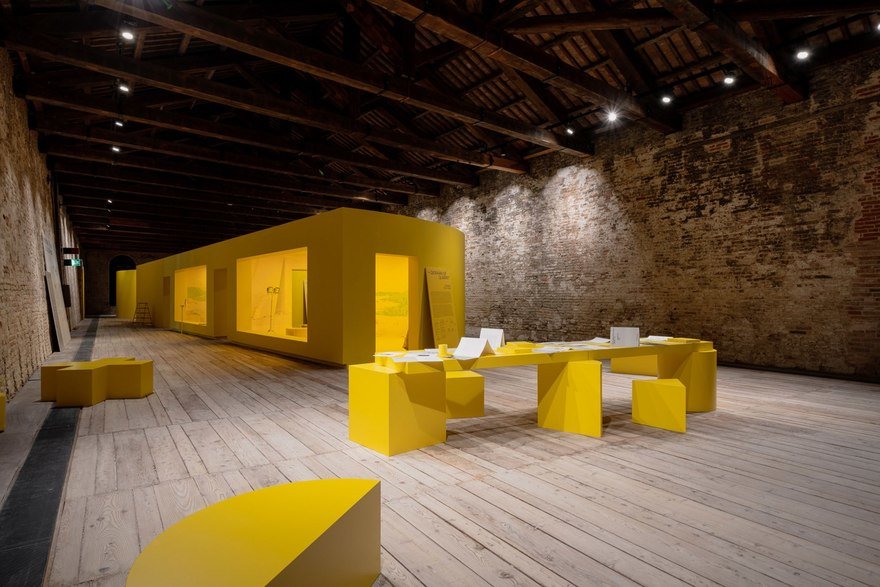 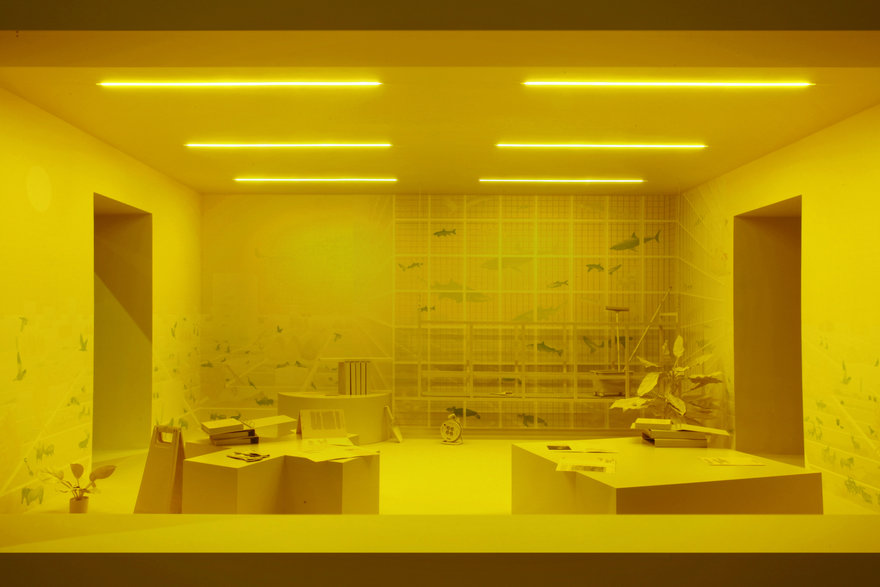 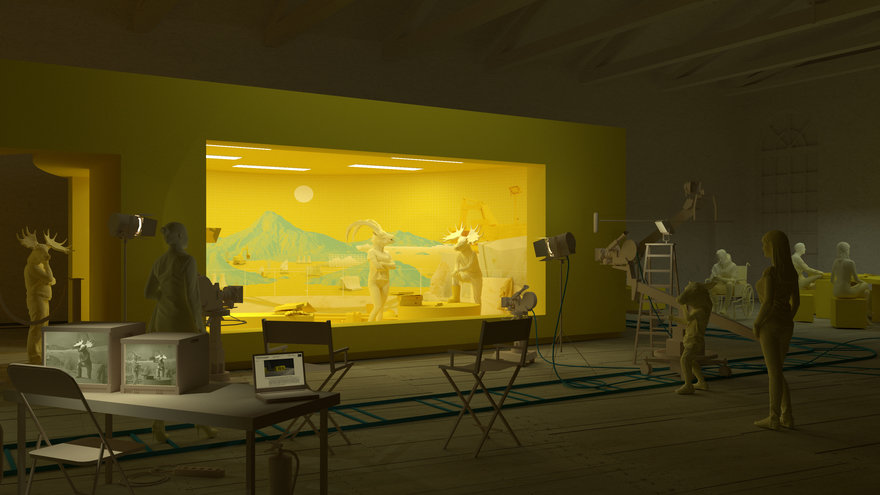 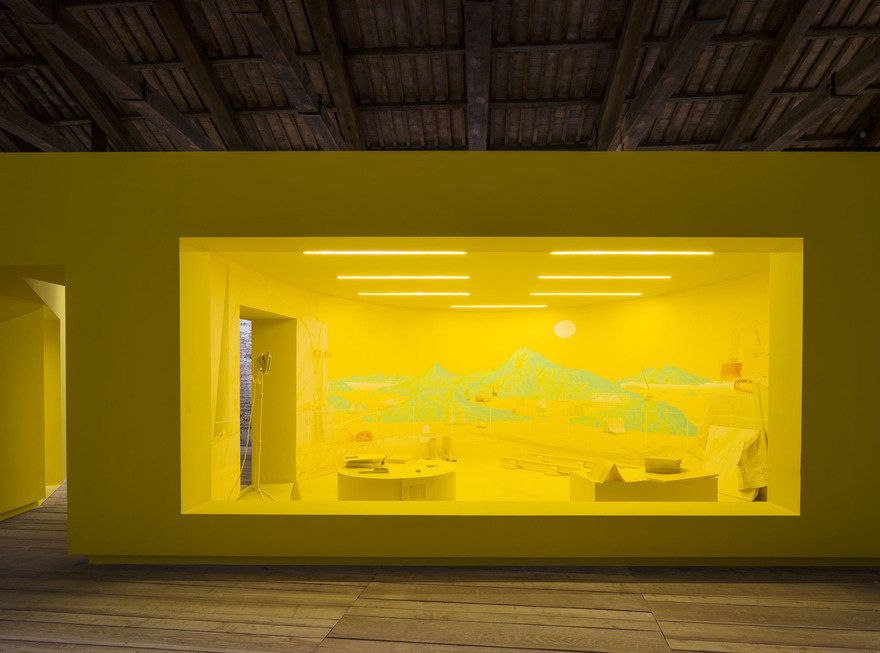 Looking towards the Diorama of Quarry, NEMESTUDIO, Four Dioramas, 2021. Photo by: RMphotostudio. 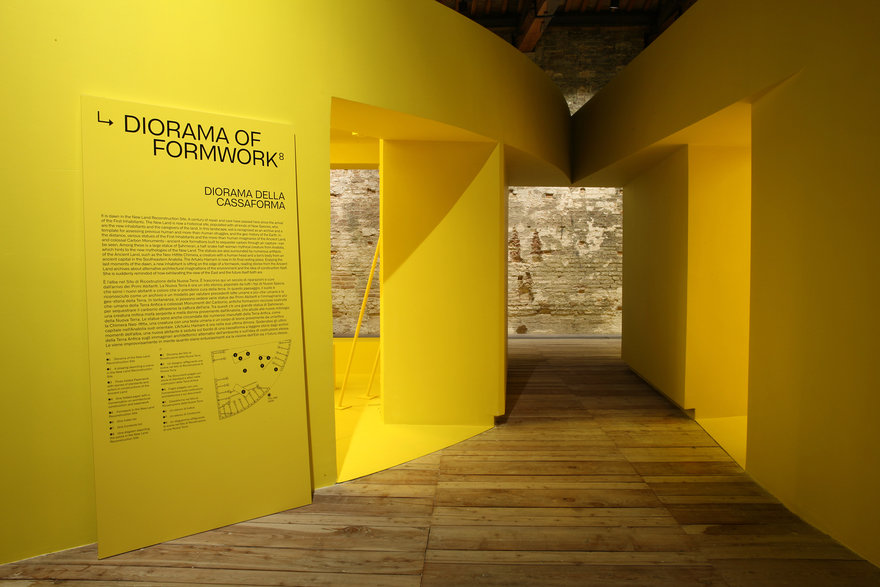 Between the dioramas. NEMESTUDIO, Four Dioramas, 2021. Photo by: Andrea Avezzù 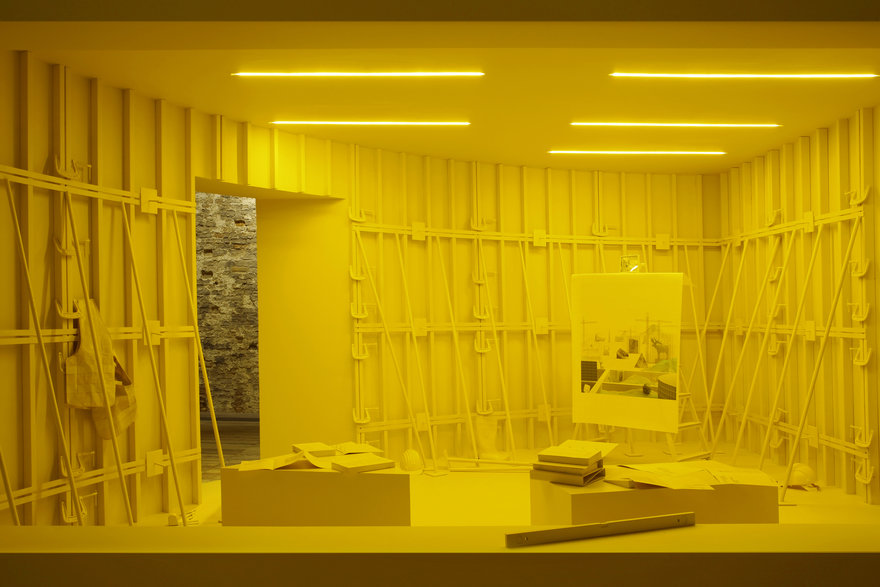 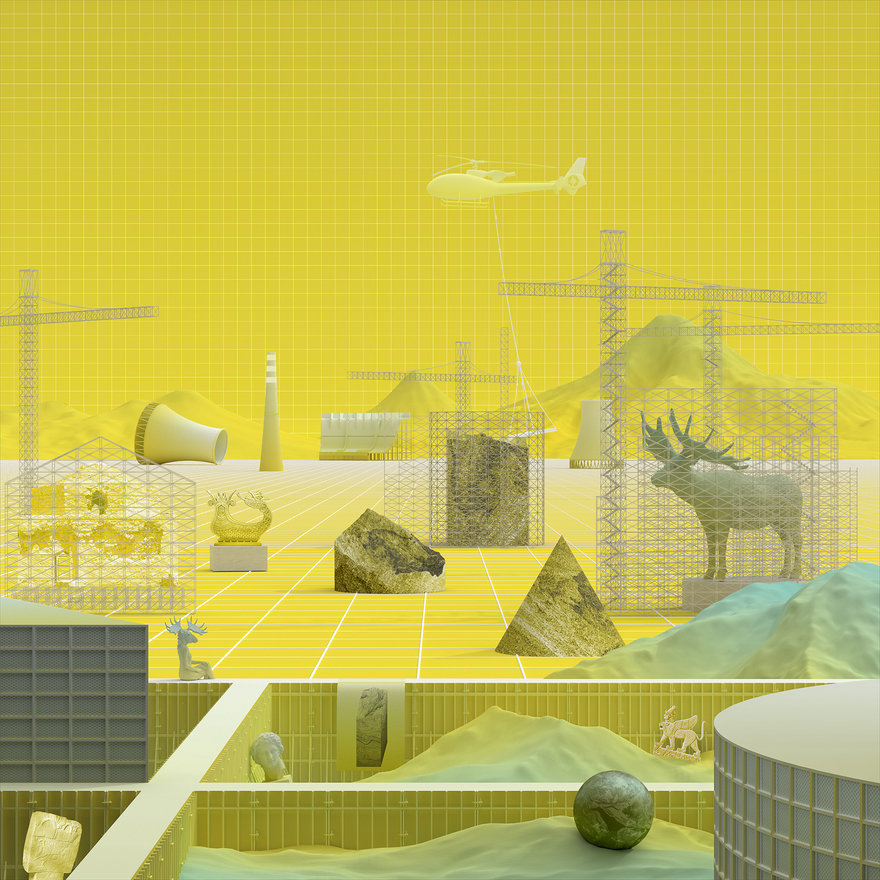 The New Land. Backdrop drawing by NEMESTUDIO exhibited at the Diorama of Formwork. NEMESTUDIO, Four Dioramas, 2021. 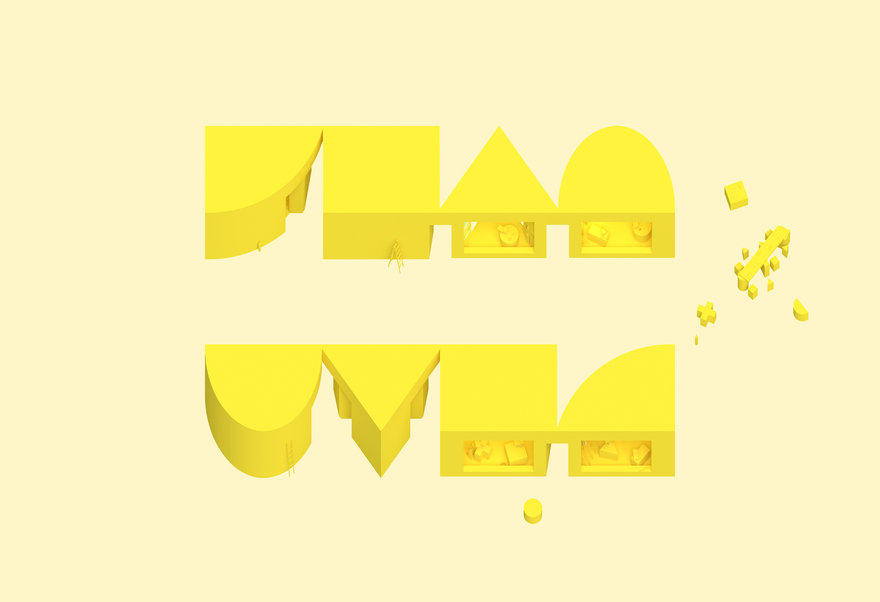 Four Dioramas installation is a provocation for a renewed planetary imagination. In light of the current climate crisis, what can architecture contribute toward a new planetary imagination of our contemporary environment beyond environmentalism and technological determinism? Four Dioramas positions climate change as a cultural and political idea that requires a renewed architectural environmental imagination. It starts with the provocation that instead of seeing planetary imagination purely as an isolated idea of preserving nature, as technological management, or as visualization, it is important, at this moment, for architecture to consider its potential from within its inner workings. It proposes that architecture needs to see larger planetary questions and the everyday aspects of its own making as the same thing. The planetary is about the here and now; it is embedded in everything we do, and it is waiting for a long-overdue radical change.

Taking the exhibition curator (and NEMESTUDIO principal) Neyran Turan's recently published book Architecture as Measure (New York and Barcelona: Actar Publishers, 2020) as a theoretical preamble, the installation speculates on architecture as a measure against which such an imagination might be read.

The project focuses on the politics and nuances of the seemingly mundane aspects and sites of architectural construction, juxtaposing them with their respective planetary counterparts through geographies of material extraction, supply chains, maintenance, and care in Turkey and beyond.

In the context of climate emergency, Four Dioramas positions architecture as a measure to provoke an alternative planetary imagination that can help assess our place on Earth and our role in relation to those with whom we live together: as architects with the actors of other disciplines and domains of work, and as a species alongside more-than-human others.

Taking the exhibition curator Neyran Turan's recently published book Architecture as Measure (New York and Barcelona: Actar Publishers, 2020) as a theoretical preamble, the exhibition speculates on architecture as a measure against which such an imagination might be read.

Why the emphasis on imagination at this moment when urgent action is already overdue? It is precisely because of the exigency of our current moment that we are driven to the significance of imagination. First, imagination matters because, as evidenced with the recent COVID-19 pandemic and the Black Lives Matter protests throughout the world, the intricacies of systemic injustice and climate emergency call for unconventional approaches that can make sense of the collision between the quotidian and the planetary—the vast geo-temporal scales through which climate emergency accelerates. If there is a close link between the pandemic and the proliferation of deforestation, biodiversity loss, unrestricted agriculture, extraction, and urbanization in remote areas, this means that the planetary scale of climate emergency and our everyday lives are not only intricately correlated but are exactly the same thing.

Second, imagination matters because, as has been pointed out by many geographers, climate change is not about a self-righteous battle between "nature" and "humans," but the consequence of centuries of extractivism, colonialism dispossession, and racism. Simply put, the humans who are the most responsible for climate change are the most insulated from its effects, whereas those who are the least accountable feel the greatest effects of this slow violence. Consider, for instance, how the pandemic has been disproportionately affecting the most vulnerable communities (lower-wealth communities, people of color, Indigenous people, and the elderly, etc.), which correlates to their susceptibility to other ongoing environmental problems. In other words, the pandemic is yet another reminder that the idea of the planetary is not a theoretical concept in isolation. On the contrary, the planetary is about the here and now; it is embedded in everything we do, and it is waiting for a long-overdue radical change.

Third, imagination matters because it is the ultimate and most necessary ingredient for meaningful structural change in architecture and related design disciplines. This means re-assessing, decolonizing, and re-structuring—individually and collectively—the worlds we design, the institutions we build, and the systems of knowledge and value through which we see the world. An alternative environmental imagination is an important step towards that.

Instead of, on the one hand, pretending that inequalities of labor, colonialism, and resource extraction are external to the work that we do as architects, and on the other, dismissing questions of aesthetics and technique as trivial matters, what kinds of worlds are possible if we are truly willing to understand the embeddedness, the collision, and the specificities of these aspects within our practices and disciplinary imaginations? How can we bring a sensibility of care to the violence brought about by these inequalities and what is architecture's role in that change? These questions are important not only for dismantling archaic assumptions and abolishing entrenched power structures in our discipline, but also for rebuilding future foundations towards alternative worlds.

Designed by NEMESTUDIO, the installation component of the exhibition in the Arsenale is titled Four Dioramas, which consists of four rooms. Each diorama stages both a generic site of architecture—from resource extraction and material supply chains, to construction, maintenance, and care—with banal details and a specific mise-en-scène of an imaginary story taking place in Turkey. Visitors can walk inside the dioramas as if they are in the interior space of a large architectural model. As the dioramas collide the architectural and the planetary, the banal and the spectacular, and the everyday and the mythical; ideas of foreground and background are constantly flipped and negotiated. Four Dioramas depicts parts of a story, which is about multispecies survival and solidarity. Through archeology of an imaginary future that takes place in Turkey, the story reflects on some of the environmental controversies of our current moment.

Diorama of Quarry depicts a marble quarry abandoned after centuries of resource extraction. We see a view towards the open-air museum and witness the extractive construction activities of archaic times. Diorama of Logistics is a large warehouse enabling a massive transit during a multi-species migration to a new land. Ancient artifacts and numerous more-than-human inhabitants are waiting for their ultimate migration to the New Land. Diorama of Maintenance and Care is a site of repair in the New Land, where both the built structures and the endangered more-than-human beings are continually given maintenance and care. Referred to as the First Inhabitants, these animals and trees are excited for this new beginning, for a new era of Earthly survival, a celebration of sharing and living together. Diorama of Formwork is a site of reconstruction for the future inhabitants of the Earth. A century of repair and care have passed here since the arrival of the First Inhabitants. The New Land is now a historical site, populated with all kinds of New Species, the new caregivers of the land. In the distance, various statues of the more-than-human imaginaries of the Ancient Lands of Anatolia, as well as colossal Carbon Monuments can be seen. All of these hint at the new mythologies of the New Land and thus the future.

In the installation, the diorama typology works as a slow media to conflate the planetary and the everyday experiences through aesthetics and storytelling.

Maybe centuries from now, we are looking at the dioramas located in a natural history museum in Turkey and experiencing parts of a story that talk about multi-species survival and solidarity.

When the visitor is outside of the dioramas, they are experiencing a theatrical scene or a stage of a story visually. When they move to the interior space of the dioramas, they are inevitably part of the images—and thus an actor of the stories—themselves. After a visitor leaves our installation, perhaps they will remember the moment they were on stage inside the dioramas as one of the many actors within an environmental story of a yellow and changing Earth. We, architects, are also on stage in the dioramas and can be part of the necessary changes that are needed for our planet by reassessing our own assumptions about our own discipline and what we can do.

Through its focus on the entangled relationship between the quotidian and the planetary, Four Dioramas suggests another route for architecture's relation to the world, in which it is more of an agent than a mere respondent. It aspires to provoke another form of inner focus and thus engagement for architecture.

If imagination is an act of seeing, it is vital at this moment for architecture to consider—or to see differently—its planetary potential from within its inner workings, histories, and specificities. Four Dioramas is a provocation for new forms of attention for how we see and learn to see. It utilizes the language of aesthetics and storytelling to trigger another way of planetary seeing.