Unlike crew onboard the ISS, future spacecraft of limited capacity cannot provide them with dedicated sleeping compartments. Without privacy, astronauts do not have a place to tend to their personal needs. Microgravity environments cause discomfort and improper ventilation, putting astronauts at risk of suffocation from stagnant carbon dioxide. Heavy materials burden costs and potency of spacecraft. Regardless of the duration of spaceflights, these factors prove to reduce astronauts' efficiency and productivity in outer space.

BFG stands for Bed for Goldilocks, which is intended to grant maximum comfort for the astronauts during their stay in space-- just like the perfect bed for Goldilocks. The design makes use of Acoustic Multipurpose Cargo Transfer Bags (AMCTBs), with materials specifically used on spaceflights. MCTBs are layered with Nomex and Durette, which are premium grade textiles. The sleeping compartments satisfy the allotted volume of 53 cubic ft. with a workspace, a designated storage for personal effects, and has ample room to change their clothes. The air in the sleeping compartments is ventilated to prevent suffocation from stagnant carbon dioxide due to microgravity. Within the volume parameters, this stowable sleeping compartment is also a personal enclosure that provides astronauts in future spacecraft with maximum comfort and ease by effectively using AMCTBs. These individual sleeping compartments are easily assembled, deployed, and stowed away and have personalizing features to provide an enjoyable private space in limited capacity spacecraft. 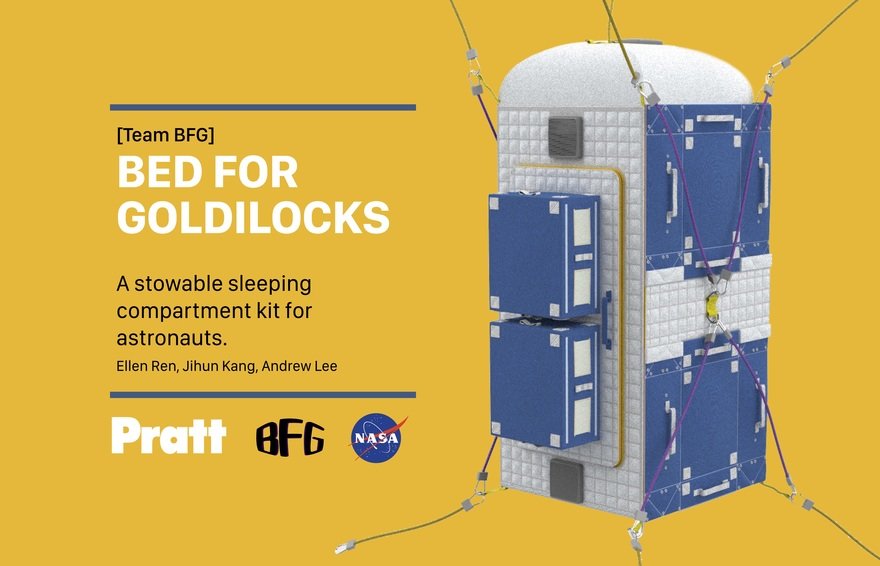 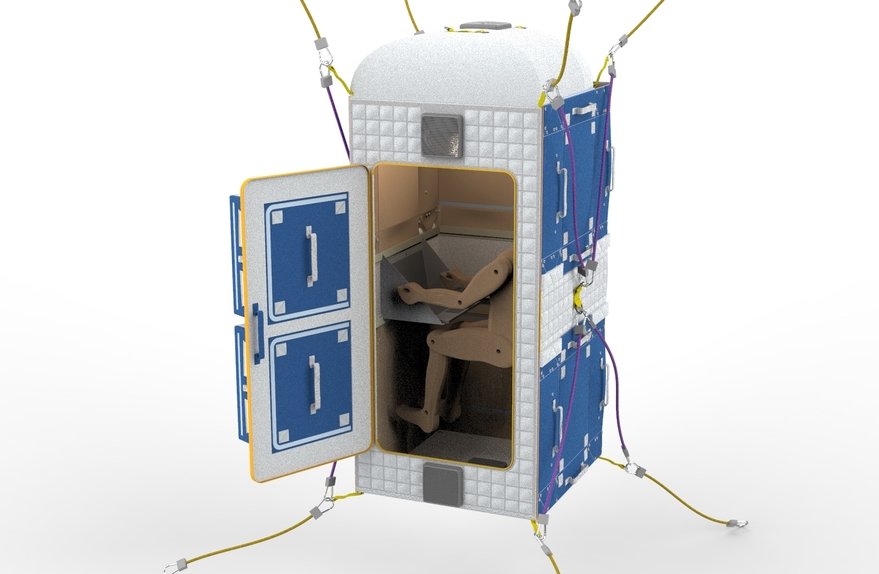 The final prototype of Bed for Goldilocks consists of 3 parts: 4 unfolded Standard AMCTBs, 2 assembled MCTBs and a BFG kit. 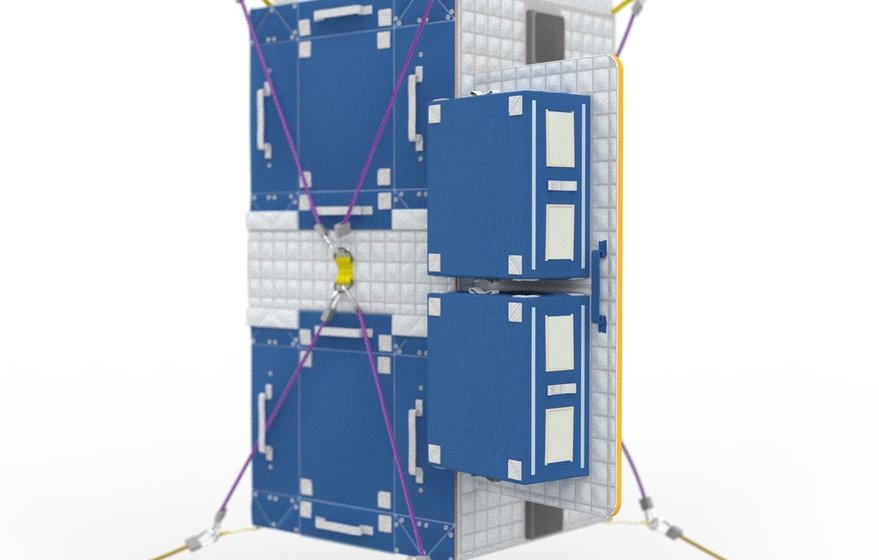 The 2 assembled MCTBs can be attached to the door for extra storage. 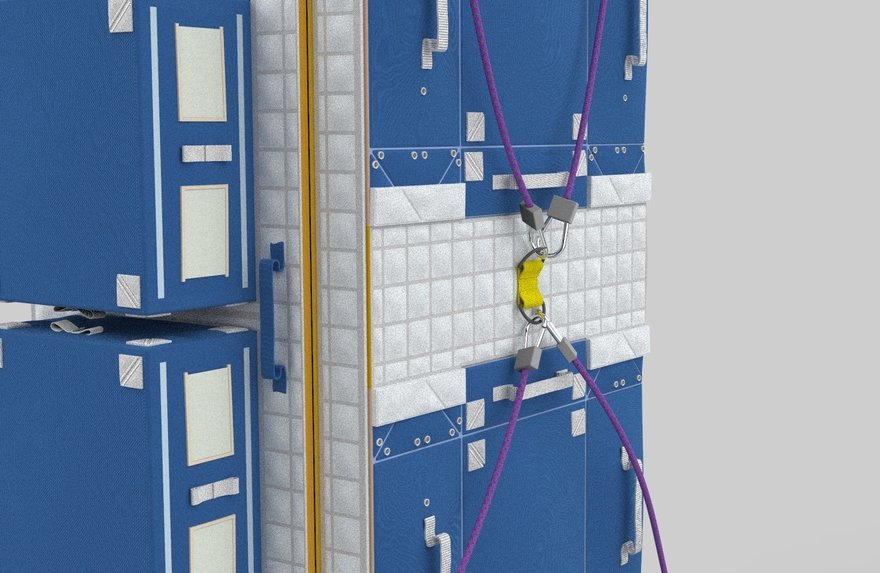 Considering the complexity of assembling, the kit is combined to the rest of the compartment using existing zippers and snaps on the MCTBs. 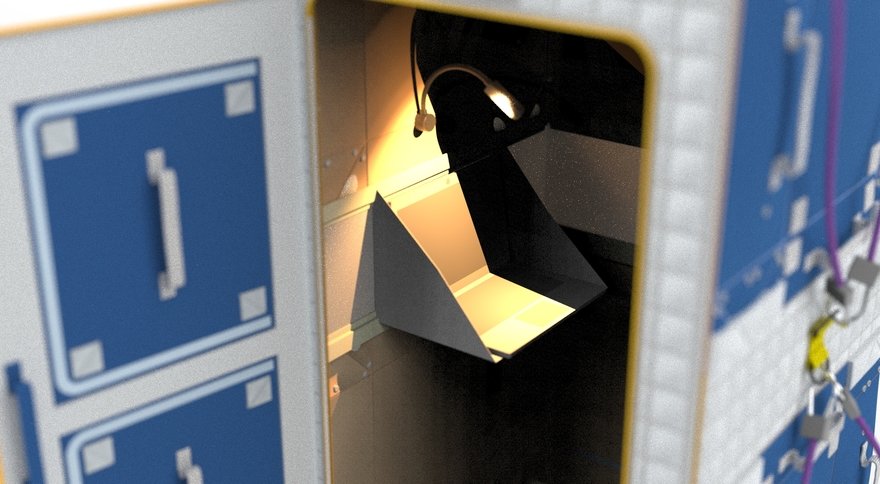 Interior workspace with a collapsable computer mount, a laptop, and a reading light. 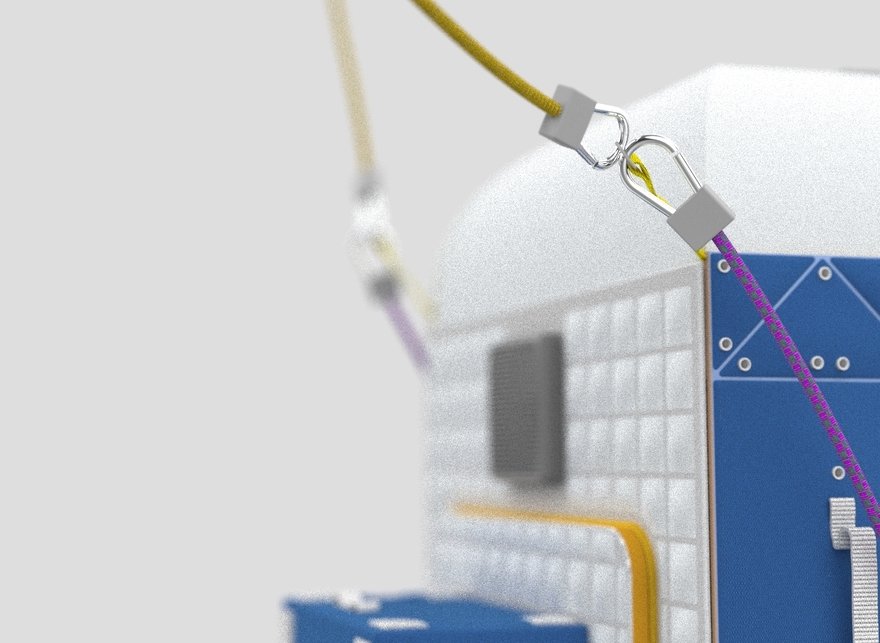 The carabiners are used to hold the compartment taut in a zero gravity environment. 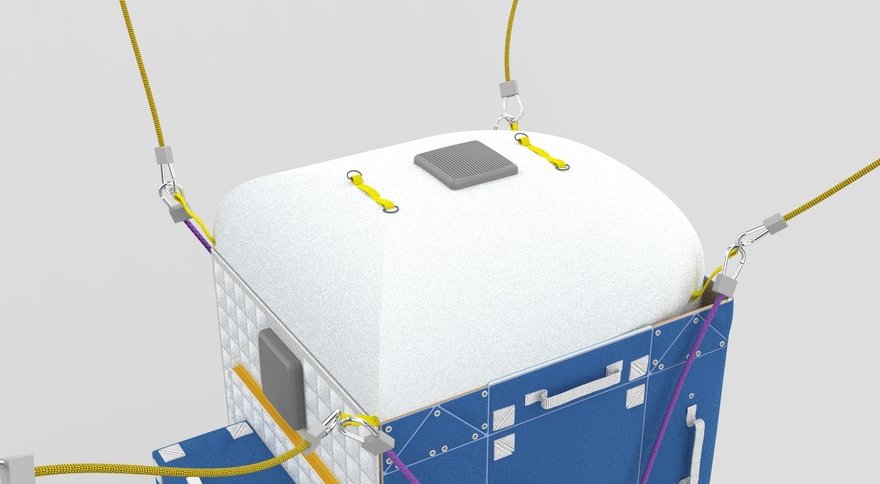 Ventilation system attached to the ceiling of the compartment. 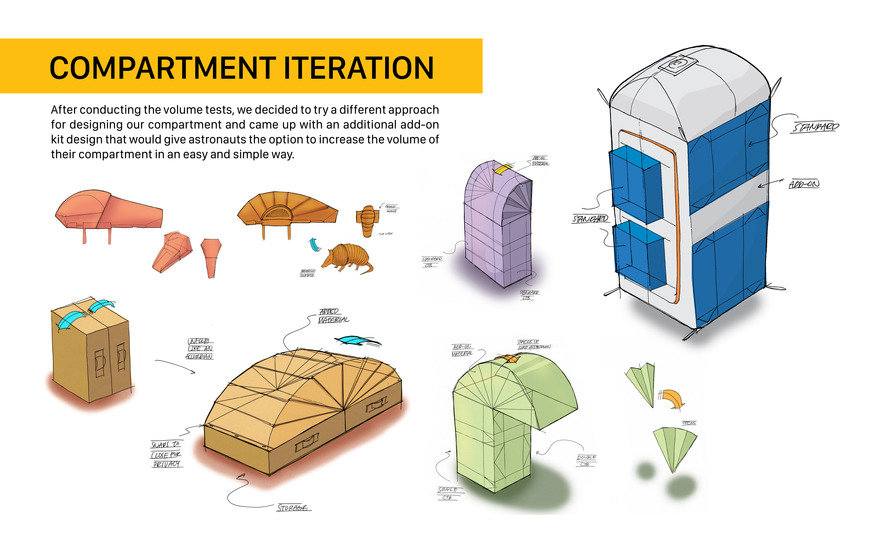 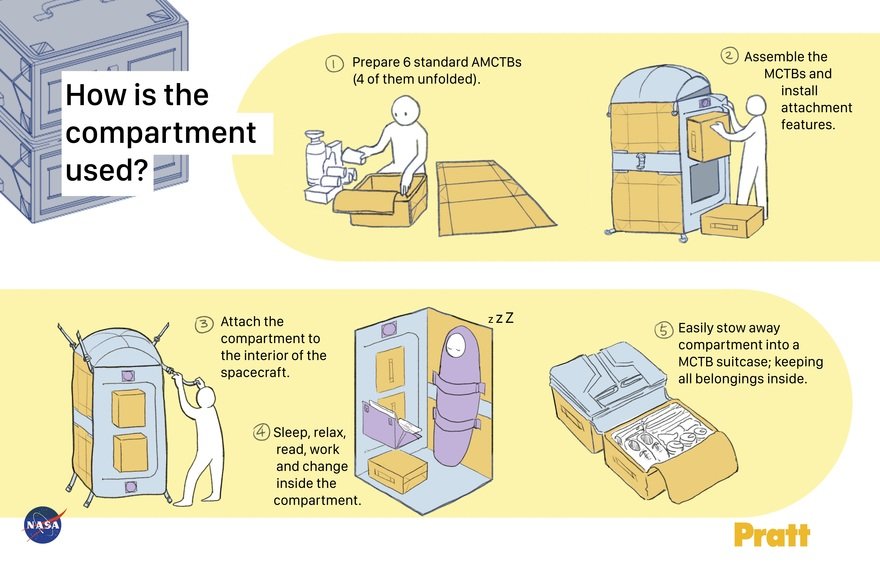 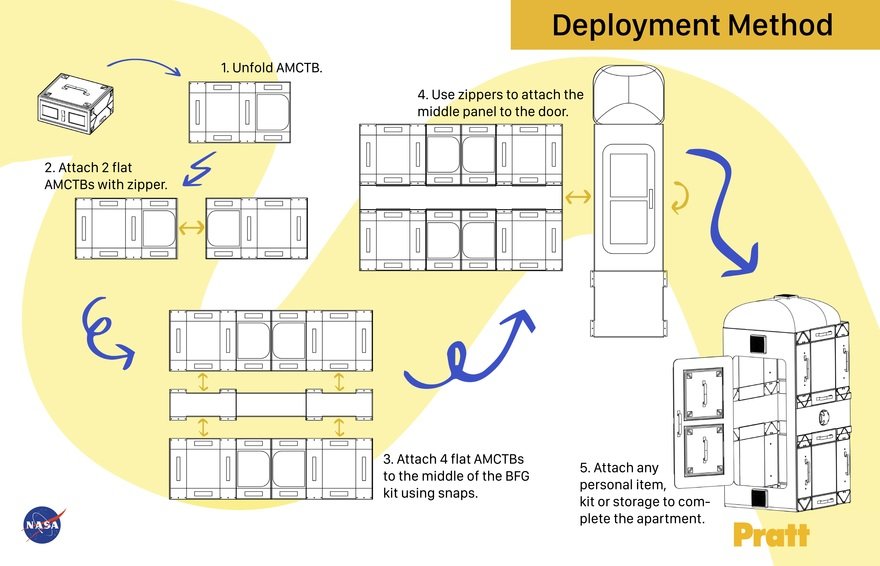 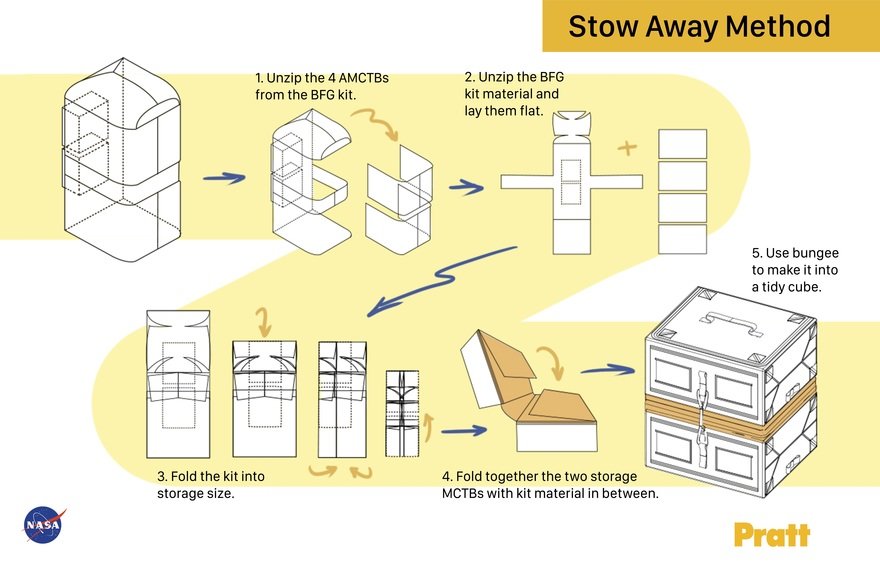 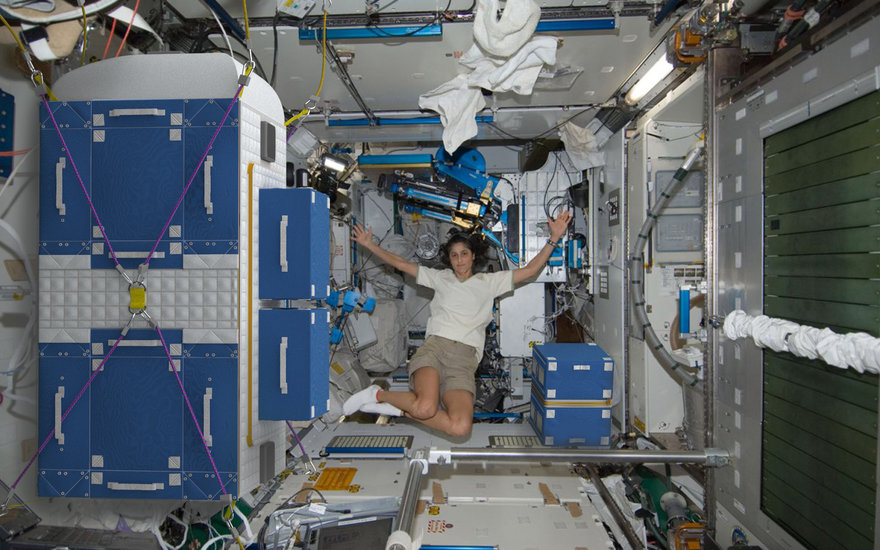 BFG on the ISS The BFG compartment in place with expedition 33 commander Sunita Williams floating in the inside of Tranquility module. BFG, NASA

Innovations in space exploration demand future spacecraft to sacrifice capacity. Unlike the relatively spacious International Space Station (ISS), future spacecraft do not have enough space to accommodate permanent sleeping compartments. This calls for a solution to provide astronauts with the privacy they are currently lacking. Additionally, launching into outer space is quite costly, and added weight is burdensome; therefore, in an effort to reduce weight, NASA is implementing Multi-purpose Cargo Transfer Bags (MCTBs), which allows Cargo Transfer Bags (CTBs) that once just contained cargo, to fold out to serve additional functions.

Microgravity environments cause discomfort and improper ventilation, putting astronauts at risk of suffocation from stagnant carbon dioxide. Since our users, the astronauts, venture beyond the atmosphere, they are no longer gravity-bound which can lead to many physical and mental problems. Regardless of the duration of spaceflights, these factors prove to reduce astronauts' efficiency and productivity in outer space. In order to compensate for these complications, astronauts need an easily stowable sleeping compartment to provide maximum comfort while effectively repurposing MCTBs.

In order to get ourselves acquainted with the 53 cubic feet volume requirement, we made volumes out of foam core to get participants to test the forms following a procedure. The first form's height is 79 in. to accommodate astronauts of varying heights (National Aeronautics and Space Administration (NASA), 2014, p. 62). After user testing, we found that the rectangular forms are more functional with less wasted space, and curves are generally cozier and create additional comfort since it usually gives a sense of orientation which astronauts prefer when sleeping in space.

We conducted human factors tests as well to gauge the average reach of an astronaut in microgravity so that they have ample room to navigate around a space using their arms. We had participants lay on their stomachs on a skateboard and crawl on the floor with only their hands. The arms' reach was the distance between the hands every time they made contact with the floor, and the stride was measuring the next point of contact with the same hand. These dimensions suggest when one would reach and grab to either push or pull. This test helped us arrive at our final design where the unfolded Standard AMCTBs would be creased along an existing stitch, which was once an edge that was 19.75" x 16.75".

The team gauged a comfortable timeframe a user puts away a sleeping bag. Although the sleeping compartment is not a sleeping bag, the behaviors are alike, for campers also stow away their bags after each use. There were many influencing factors in our test, some participants had experience with sleeping bags while others did not. The times vary, but the average was found to be a little over two minutes. This tells us that our final sleeping compartment should meet the same timeframe during stowage.

To find as many combinations of MCTBs as possible in a short amount of time, small scale MCTBs was created in 1:10 and 1:16 scales. A small foam model of an astronaut was also created in comparison to the small scale MCTBs. They helped with understanding the amount of MCTBs needed to achieve the 53ft3 limit and how the MCTBs can be folded with the existing dimensions.

Throughout the investigation, the functions and locations of the fasteners were also examined. There are more than 6 zippers around the edges of an MCTB and as many as 10 sets of snaps. Thus, it is highly feasible to use existing fasteners in the final design, reducing the amount of modification and logistics. Other fastening methods were tested for the possibility of any add-ons, including the following: metal snaps, plastic snap, zippers, and velcro. However, considering the complexity of assembling a sleeping compartment, it is best that we use additional materials to combine the MCTBs, still making use of existing zippers and snaps.

Initially, we started sketching and designing based on simple forms that would accommodate all the required features. Looking at all the designs, we noticed that the designs were too terrestrial so we decided that we had to start designing without being limited to our typical stereotype of a room. After exploring this design strategy, we ended up favoring a design that folded the sleeping compartment between two folded MCTBs. We first sketched designs and then moved onto CAD to figure out the rudimentary form of the compartment. From improving on this concept, we came up with the final form of the compartment.

The final prototype of Bed for Goldilocks consists of 3 parts: 4 unfolded Standard AMCTBs, 2 assembled MCTBs and a BFG kit. To initiate deployment, 4 AMCTBs are unfolded and zipped/snapped together by twos and then attached to the middle of the BFG kit. Take the whole panel of the 4 AMCTBs and zip them onto the middle panel with the door to get the full compartment. There are bungees at the corners of the compartment that will be used to attach it to the walls of the spacecraft in order to hold the compartment in place. When the compartment is no longer in use, the astronaut will detach the 4 AMCTBs from the kit, layout the BFG Kit, fold the kit down into storage size, and tuck it neatly into a cube.

The overall dimensions of the compartment are 36.25 in. x 33.5 in. x 82 in. with a volume of around 53 ft.3. These dimensions allow ample room for astronauts of varying heights and stature to dress, sleep, and perform other personal tasks comfortably in the compartment. Inside the compartment are four push-pull fans for ventilation, a fabric computer stand, an outsourced gooseneck light, velcro walls, a photo storage panel, and a sleeping bag. The two MCTBs attached to the doors can be used to store the astronaut's personal items. They will remain intact after the compartment is stowed away.