According to the Living Planet Report 2020 by the World Wide Fund for Nature (WWF), human society's speed of natural resource consumption has exceeded 20% of the planet's self-renewal capacity. Governing organisations' interventions are necessary to increase natural resources utilisation in case of the nosedive of humankind's overall living standard after 2030. However, it is not unusual to see policymakers take increasing natural resources utilisation as an excuse to gradually reduce the public interest rather than make them the beneficiary.

Taking the resource problem as an introduction, we designed an alternative future community where sciences and technologies become part of the giant ideological, social machine.

The project takes the human body transformation as a solution to divide the social functions and realise the purpose of maximising the utilisation of natural resources. Its outcomes include the community ecosystem model, fictional human biological archives and descriptive fictional products such as Social Genetic Bracelet. 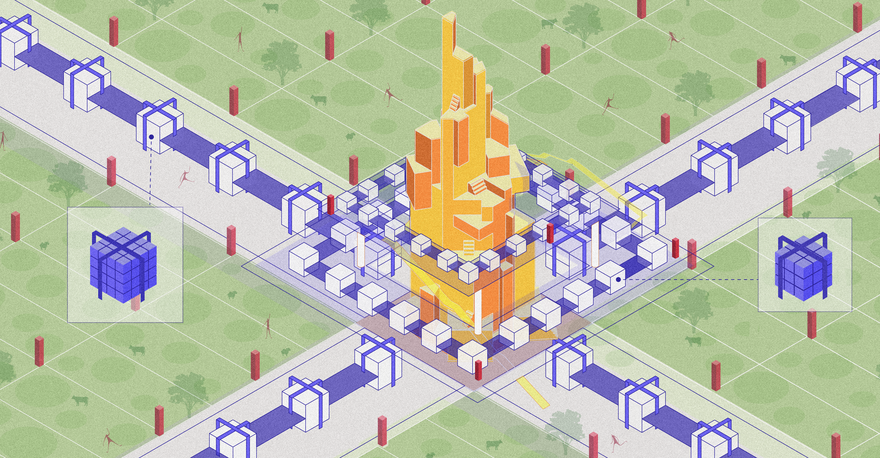 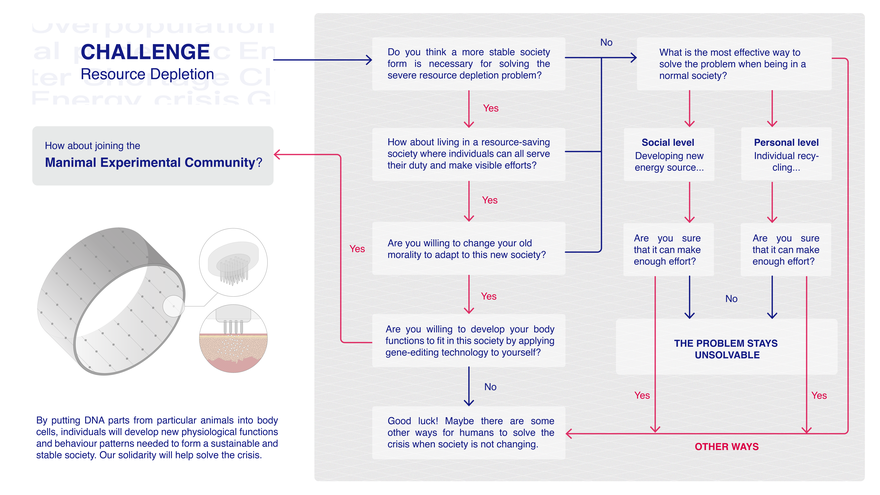 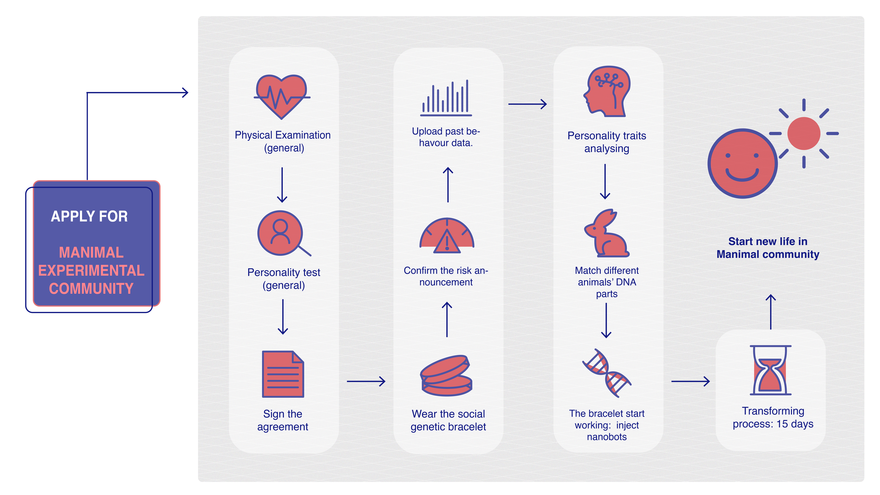 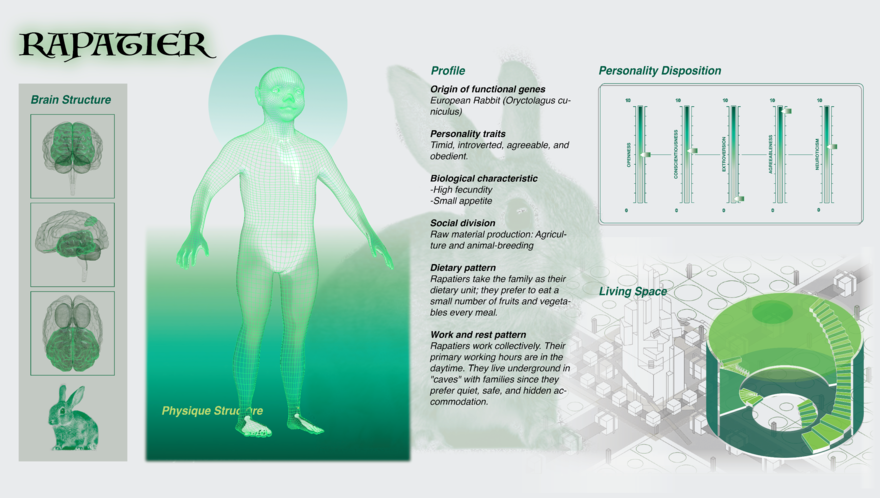 Biological archive: Rapatier Rapatiers' animal genes originated from the European rabbits, resulting in a quiet and sensitive personality. They are notable for their small appetite and high fertility. They live in safe underground spaces and are responsible for farming and animal-feeding on the ground during the daytime. 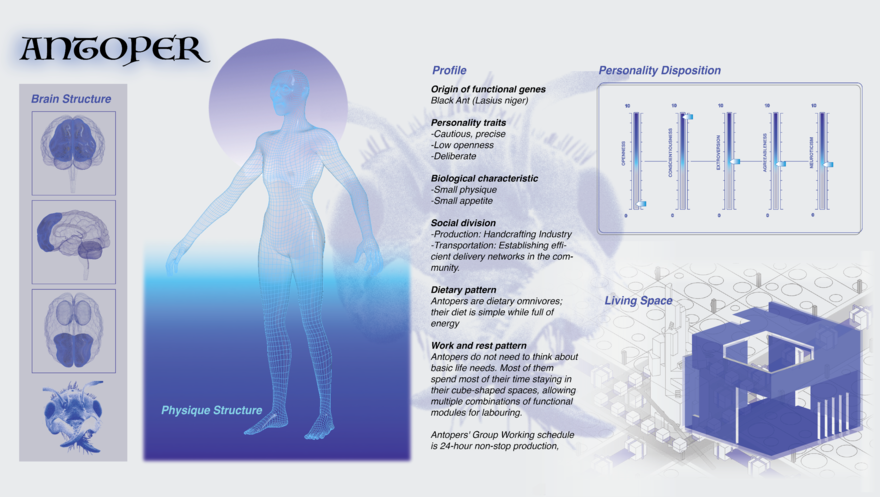 Biological archive: Antoper Antopers' animal genes originated from the black ant. They are highly obedient and cooperative in collective work such as manufacturing and transporting with a stable and focused personality. Thus their living and working spaces are transportable cube-shaped modules. 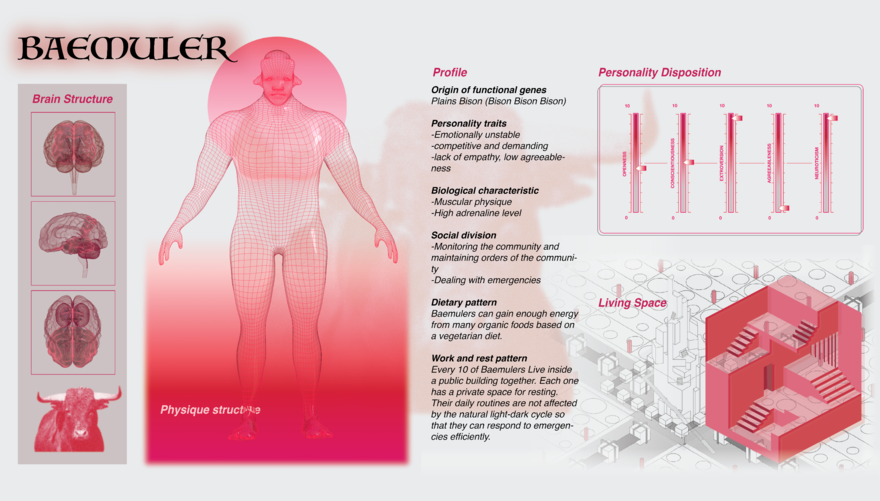 Biological archive: Baemuler The animal genes of Baemulers come from plains bison, which leads to intensive competitiveness and muscular physiques. They live in watchtower buildings collectively that are evenly distributed in the community to manage Rapatier and Antoper groups and respond to various emergencies. 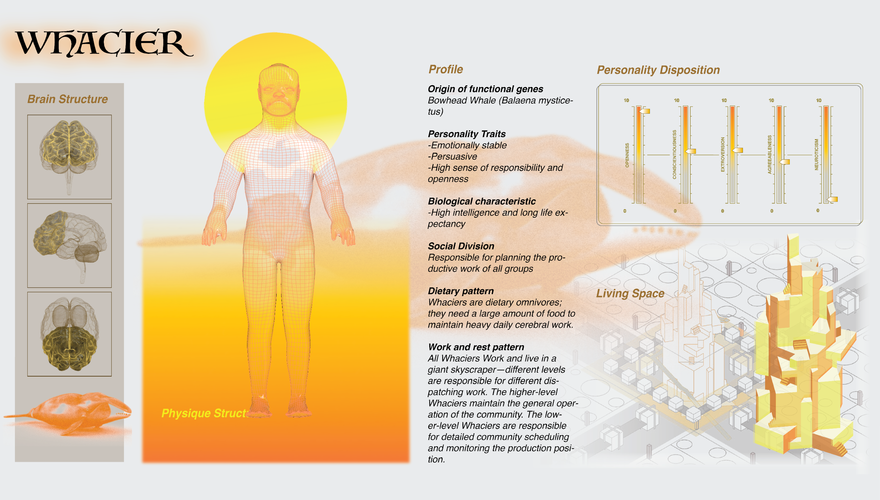 Biological archive: Whacier Whaciers bear high intelligence and life expectancy thanks to the bowhead whale's genes. They have distinct leadership characteristics and are responsible for coordinating and planning the operation of the whole community. They together live in a giant skyscraper, and their hierarchy is stringent. 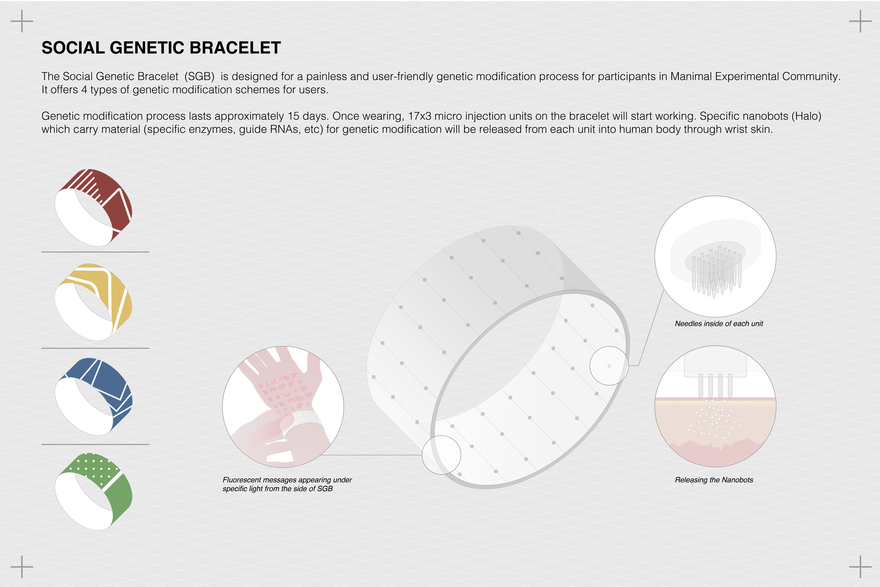 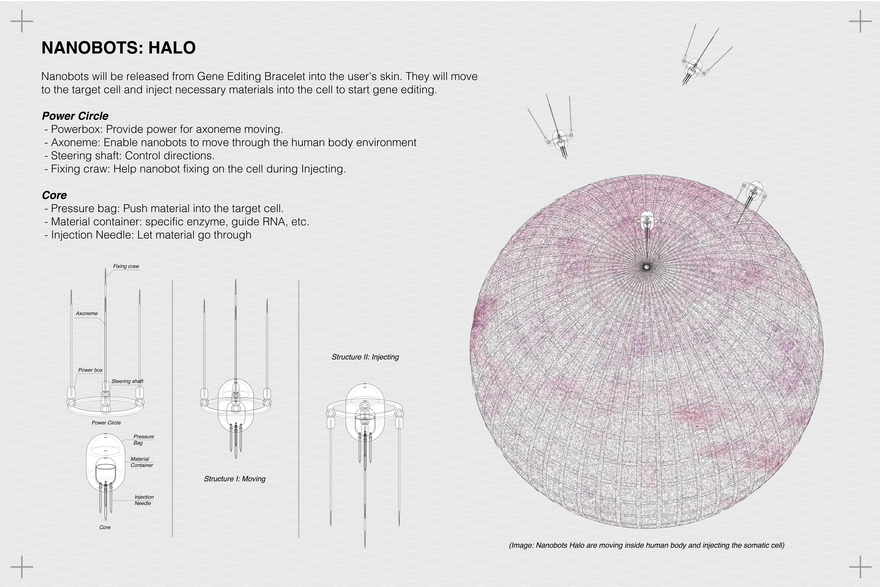 Nanobots (Halo) Once inside the user's body, Nanabots will move to target cells and inject the necessary materials for genetic modification. 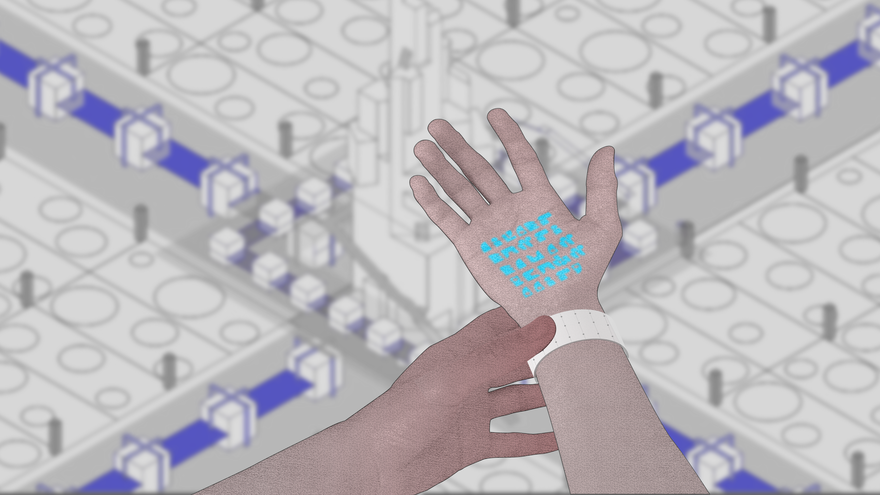 Fluorescent Messages It is the primary mean of communication among residents. The SGB can project particular lights to make residents' fluorescent proteins visible in textual styles on the skin to present messages. A large portion of the daily information is from the Whacier group for labouring guidance.

Background of the Manimal Experimental Community

The natural resources have been nearly exhausted. How to maximise the remaining natural resources utilisation and maintain the stability of the existing social structure has become the primary concern of both policymakers and the public. A project called Manimal Experimental Community (MEC) has been introduced to the public with a fine reputation and financial benefit. Participants will be genetically modified through the unique biological bracelet developed based on CRISPR technology. They will become four new types of functional social groups with typical personalities. Under this experiment, human beings can maximise their characteristics to meet the needs of a clear and stable social division of labour, use and distribute natural resources to the greatest extent.

Speculations of science/technology applications in an undesirable future

Participants who have passed the physical examinations will enter the personality classification process. Then DNA fragments from different zooblasts will be inserted into their somatic cells to trigger the expression of new body features.

The selected four types of functional animal genes are from black ant, bowhead whale, European rabbit and plains bison. After genetic modification, the human body structure will change due to the influence of animal genes, which is more suitable to bear the different work responsibilities in the community.

The insertion of animal genes will correspondingly change the prefrontal cortex, precuneus, superior temporal cortex, fusiform gyrus and other parts of the human brain, thus strengthening the four typical personality traits and enabling residents to meet the high-precision social division of labour needs psychologically. In addition, residents will get four types of extra fluorescent genetic marks (red, yellow, blue and green) as the invisible distinction.

Residents' physical and psychological distinctions lead to different work and rest patterns. Four groups are in alienated relationships in daily life while being strongly tied to each other on the social level.

SGB provides a safe and user-friendly genetic modification process for Manimal Experimental Community residents who have passed the physical examinations.

After wearing, the bracelet's 3 x 17 injection units will release Nanobots (Halo) carrying unique materials (such as specific enzymes, guide objects) into the human body. The initial genetic modification process lasts for approximately 15 days without causing any discomfort to the user. Fifteen days later, the bracelet will continue to function as messaging and data collecting equipment.

The community is in the early stage of the experiment, which emphasises the beginning unbalanced situation between personal interests and social vision under the harsh environmental conditions. It depicts the situation in which people's attention on personal interests is "persuasively" transferred to a grand social vision with partial retention of individual autonomy rights. We hope to reserve enough room for the imagination to allow the public to consider, focus and think about related phenomena. What kind of vision should human beings hold for a reasonable way of life when facing a possible unwanted future?