Gomo is a plush toy that interfaces with an augmented-reality point of care iPad app. Gomo is designed to use as a tool for hospital staff to explain illnesses and injuries to preschool-age children. When the Gomo app scans the stuffed toy, it projects the body systems in 3D onto the surface of the toy. The Gomo app features ten body systems: the skeletal system, integumentary system, immune and lymphatic system, respiratory system, cardiovascular system, nervous system, muscular system, digestive system, endocrine system, and urinary system. When Gomo is not interacting with the app, it is a metal-free toy that can be held for comfort during procedures like CAT scans, MRI, and X-rays. 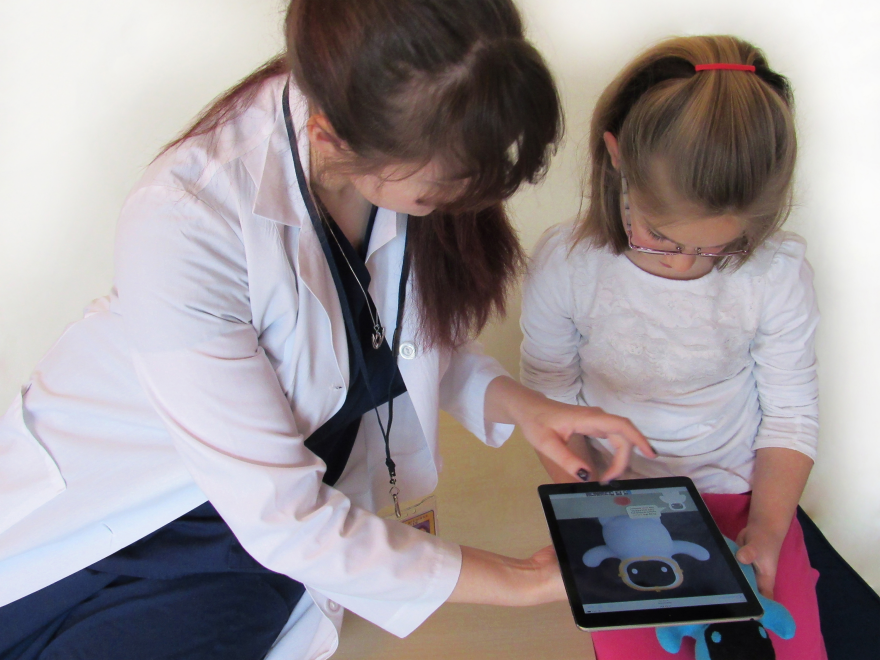 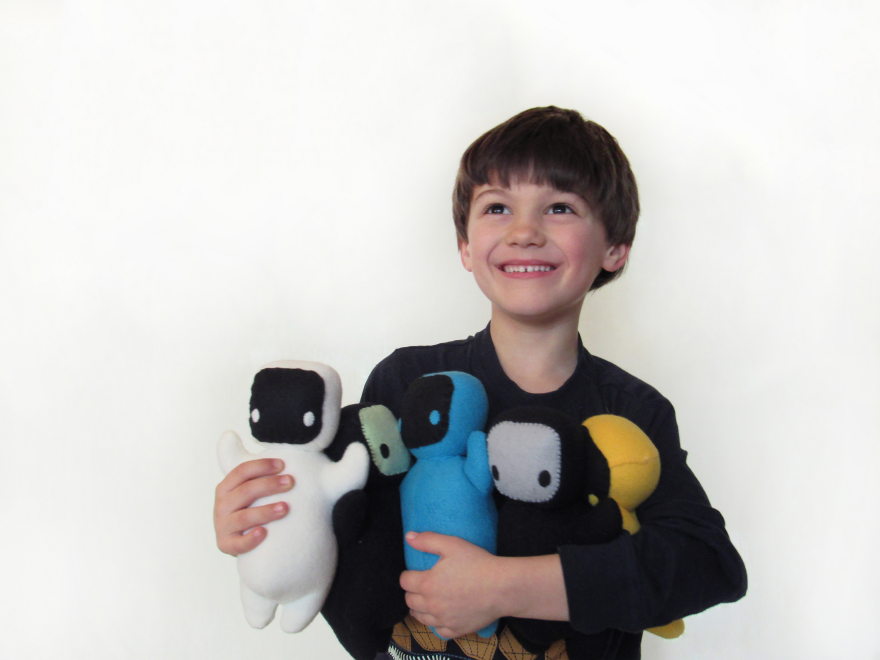 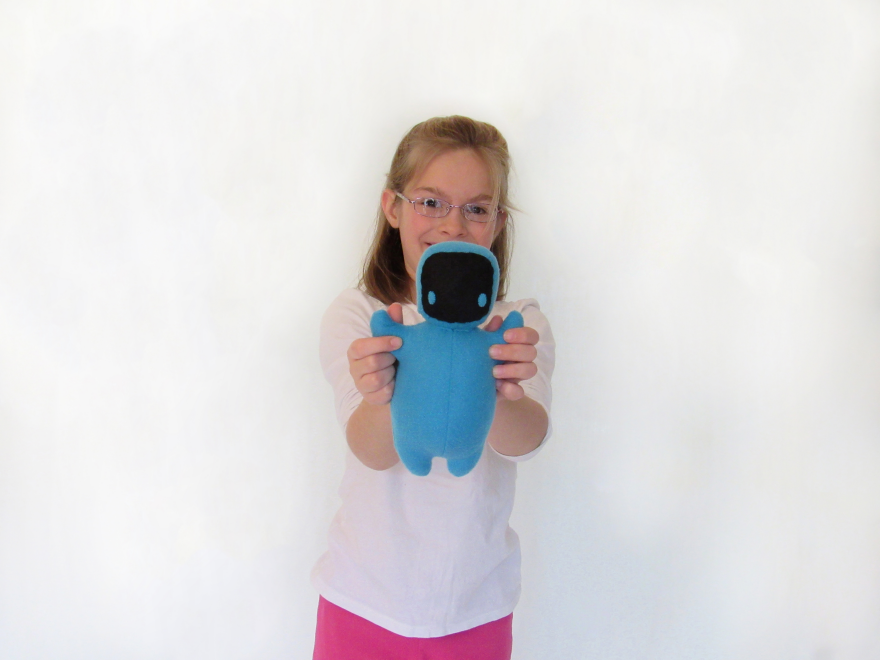 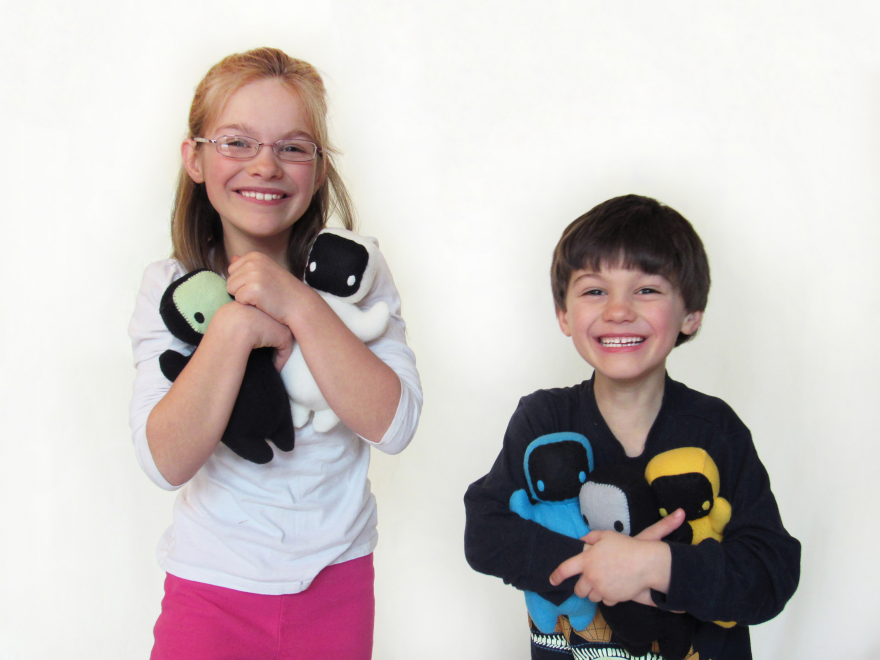 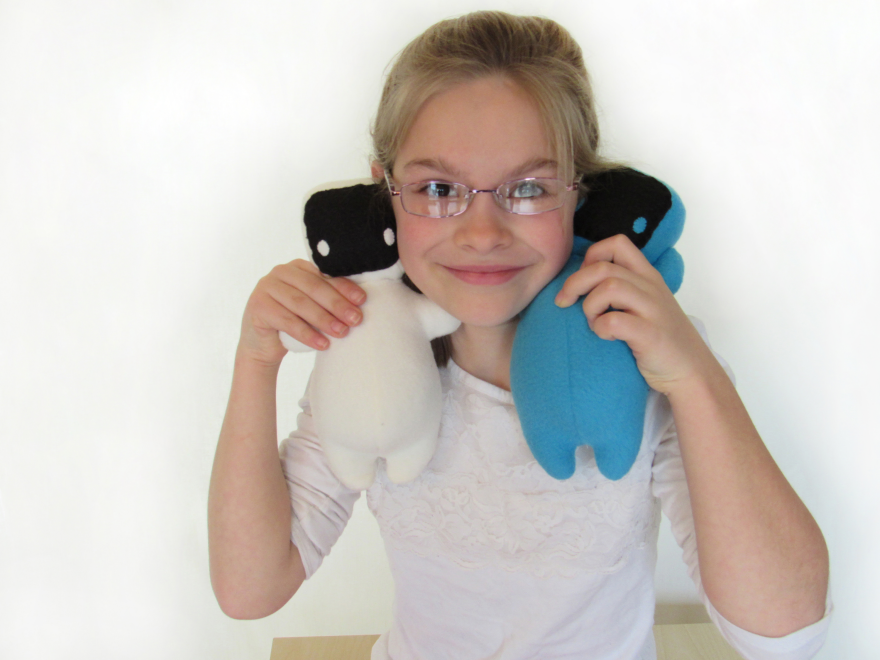 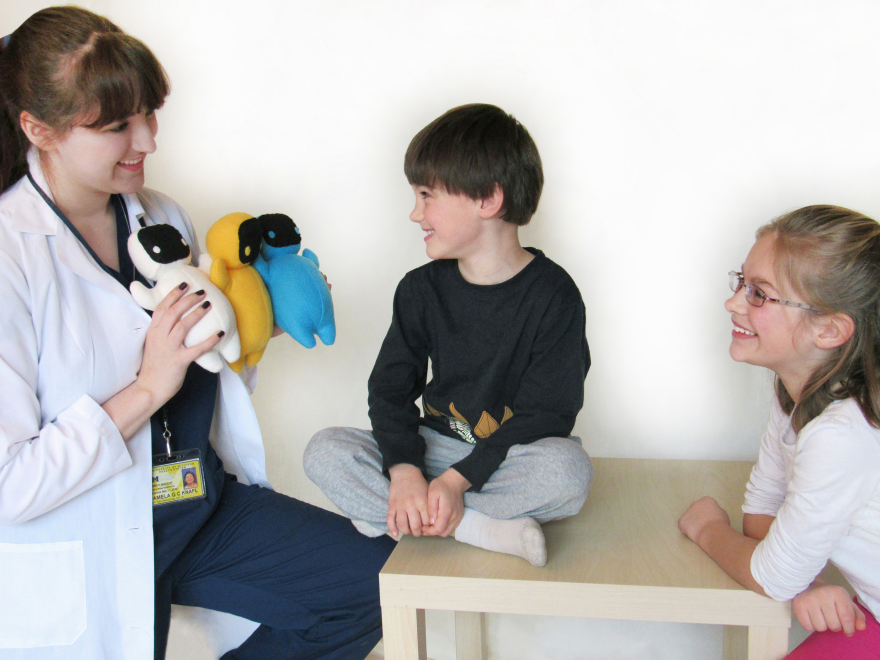 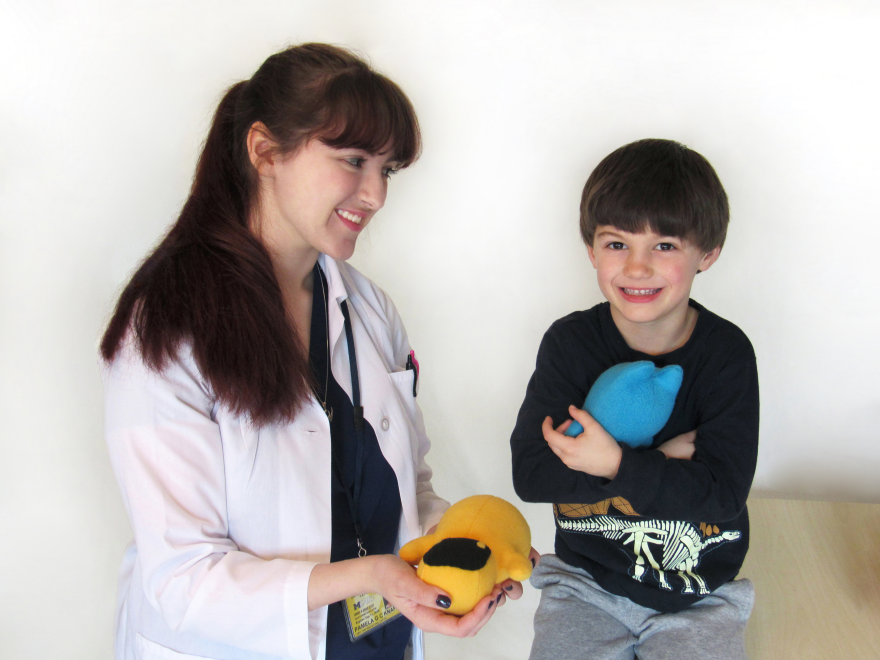 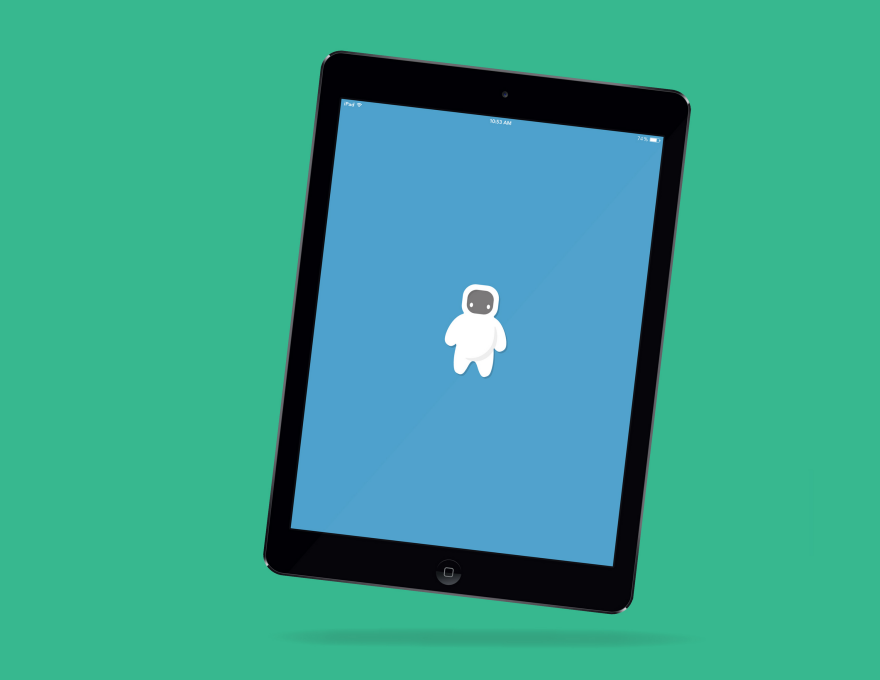 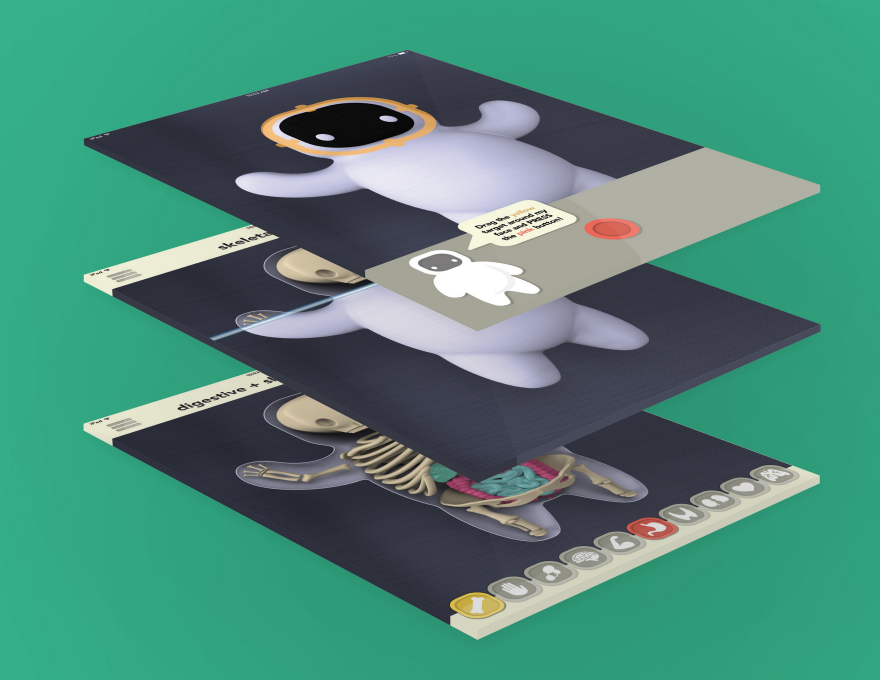 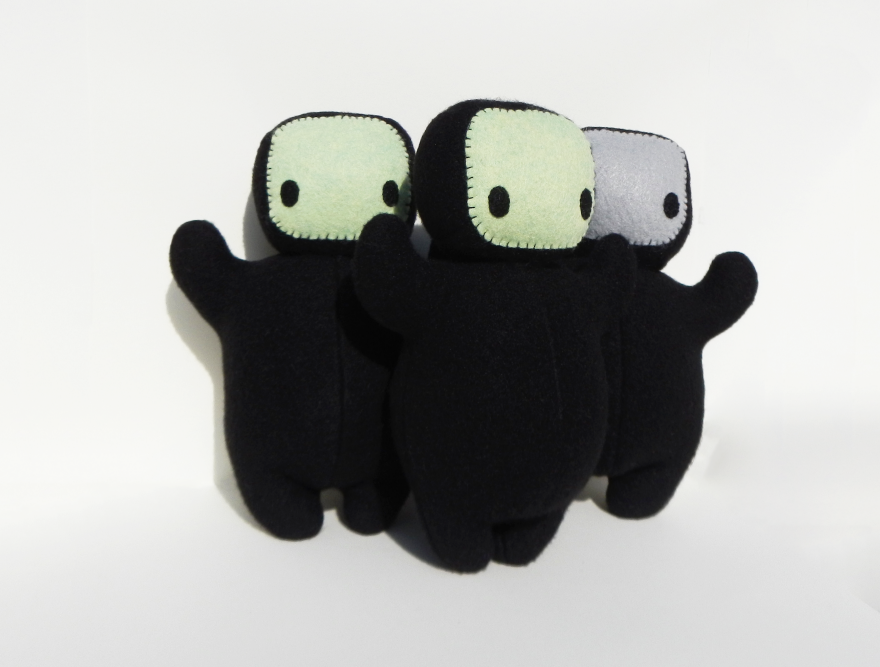 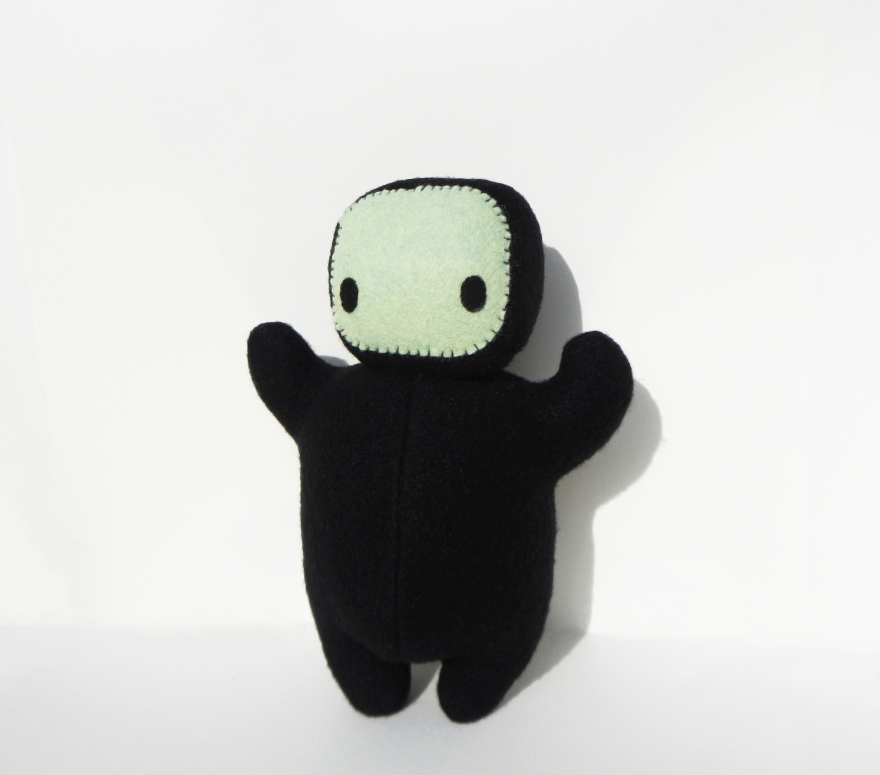 The National Center for Biotechnology Information has found that "Fear or distress prior to surgery has been linked to poorer outcomes: longer hospital stays, more postoperative complications, and high rates of re-hospitalization." Gomo is the result of the question: how can I help alleviate stress in hospitalized children? Three million children are hospitalized in the United States every year. Many of those children experience anxiety about being in the hospital and need to be sedated for tests and procedures. While researching these statistics, I found inspiration in the story of Doug Dietz. Doug had designed a Magnetic Resonance Imaging Machine (MRI). It was a marvel of design. When Doug went to install his machine in a hospital he witnessed a terrified little girl about to receive an MRI scan. The ideal machine he had spent years perfecting was, to her, a monster. Horrified, Doug traveled to California and took a workshop where he learned about human-centered design. When he returned he transformed how children experienced his MRI machine by covering it in decals so that it resembled a pirate ship with the patient as the captain. The result was astonishing. The number of children needing to be sedated fell dramatically and patient satisfaction rose to ninety percent. Due to decreased sedations, more patients were able to receive tests in a day, and the hospital functioned more efficiently.

Inspired by this moment of compassion, I started to gather a wide range of research that eventually formed Gomo. I contacted a Pediatric, Hematology, and Bone Marrow Transplant nurse. She told me some of the tactics her team used to comfort children during their stay, such as distracting children from ongoing procedures, giving the patients some small say in what happened to them, and to use toys as a method to explain what was going to happen next. Online, many articles corroborated this trend toward educating the pediatric patient, either through simple language or the use of visual aids and toys. This information was useful, but I wanted to understand a different side of the experience. Consequently, I asked a sample group about their experiences in the hospital as children. I started by asking this group how many of them had experienced anxiety in the hospital as kids. Almost sixty-two percent said yes. Next, I asked my sample group a series of questions about what had caused this stress and what they thought could have helped. I was temporarily stymied; I had collected a wealth of useful information but all these insights still had not lead me in a direction I could ideate upon.

Then I had an epiphany while talking to one of my classmates. She described how as a child she was frequently hospitalized for lung problems, but she was never scared because she learned how to control her heartbeat and make the alarm go off on the heartbeat monitor which confused the nurses. I had been asking the wrong question all along. I flipped the question around. I started to ask my sample group: what made you NOT afraid in the hospital? Suddenly, I had an abundance of completely new information. One man told me the story of how a nurse talked about his favorite movie, The Emperor's New Groove, with him. Another man talked about how a nurse gave him a toy car carved by a local man. The overwhelming trend among these many stories was that a positive interaction with hospital staff made all the difference. A real human connection comforted these people as children and made them feel valued as an individual. The solution was clear. I needed to design an educational tool that would facilitate this connection between child and staff. I knew from previous research that preschool-aged children were particularly vulnerable to stress in the hospital; therefore, I focused on this age group and designed a plush toy. I began to ideate on the physical form of Gomo, an anthropomorphic plush toy that would correspond with an educational app. Gomo's app would help staff explain illnesses and injuries to preschool-aged children. The app that pairs with Gomo displays ten of Gomo's body systems. These systems would be detailed and educational but caricatured so as not to be frightening. Using this app, staff could point out and describe what was happening to their little patients. Integrating an app into a hospital setting is now possible because many hospital staff currently use iPads for professional use. I needed Gomo to be roughly human shaped for the Gomo app to function. I studied beloved children's characters such as SpongeBob, BMO, Plankton, and EVE from WALL-E. I recognized that there is a formula to designing a lovable kid's toy. Take one or two simple shapes (a square, circle, rectangle, etc.) and add arms, legs, and a cute face. Gomo is also designed to be machine washable to ensure safety from contamination and is created from a simple pattern that is inexpensive to manufacture.

Lastly, the four pieces of the puzzle, the staff member, Gomo, the Gomo app, and the child, needed to come together. To do this I used augmented reality. Augmented reality uses points of reference in the physical world, similar to a QR code being scanned by an iPhone, to orient the augmented picture on the screen. The Gomo app uses Gomo's face as points of reference to orient Gomo's body systems over the physical plush toy. Given that the Gomo plush uses augmented reality to pair with its app, it is completely metal free unlike other toys that activate apps.

Consequently, it can be taken for comfort into machines that don't allow metal, such as MRIs and X-rays. Gomo's system of use was now complete. The medical staff member presents the Gomo toy to his or her patient and uses their iPad to project the applicable body systems onto the toy. During this interaction both child and staff are given the opportunity to interact in a comfortable and educational setting similar to play. After which, the child is allowed to keep Gomo, reinforcing the positive interaction. Gomo uses human-centered design to help alleviate stress in hospitalized children.

Good identification of a project opportunity and great execution of a physical product coupled with a very well detailed digital experience.