(Im)possible Baby is a speculative design project which aims to stimulate discussions about the social, cultural and ethical implications of emerging biotechnologies that could enable same-sex couple to have their own, genetically related children. Delivering a baby from same-sex parents is starting to not look like a sci-fi dream anymore–recent developments in genetics and stem cell research, such as the recent achievements of scientists from Cambridge University in England and Israel’s Weizmann Institute of Science (Surani A Irie N, Weinberger L, et al. SOX17 Is a Critical Specifier of Human Primordial Germ Cell Fate. Cell. 2014.) have made this dream much closer to reality. Is creating a baby from same-sex parents the right thing to do? Who has the right to decide this, and how? This project aims to design to inspire debate about the bioethics of producing babies from same-sex couples. In the first phase, I analyzed the DNA data of a lesbian couple using 23andme to simulate and visualize their potential children. I then created a set of fictional, “what if.." future family photos using this information, and produced a hardcover album which I presented to the couple as a gift. To achieve more public outreach, I worked with the Japanese national television NHK to create a 30 minute documentary film which documented the whole process of analyzing the DNA and designing the photo album. The film also included our interviews of scientists and the lesbian couple about their views on bioethics. Finally, the project will analyze and evaluate the public reaction triggered from this documentary program after it is aired nationally in Japan, and also after it is subtitled and released online, available to more people internationally. 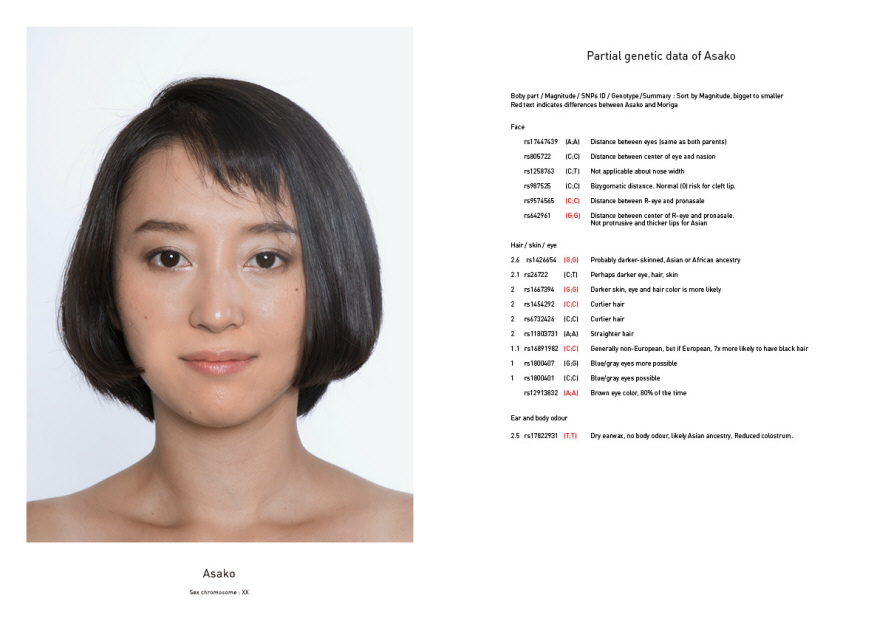 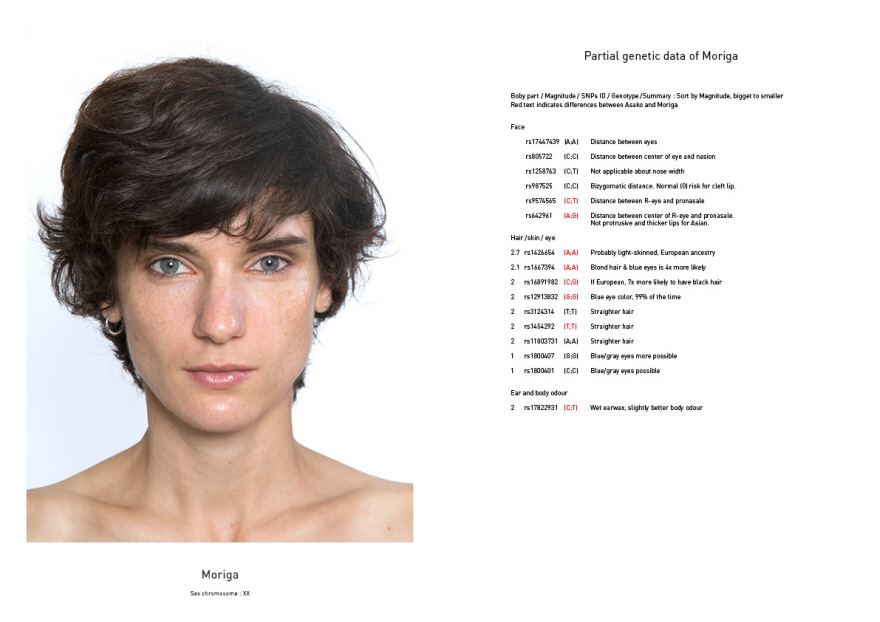 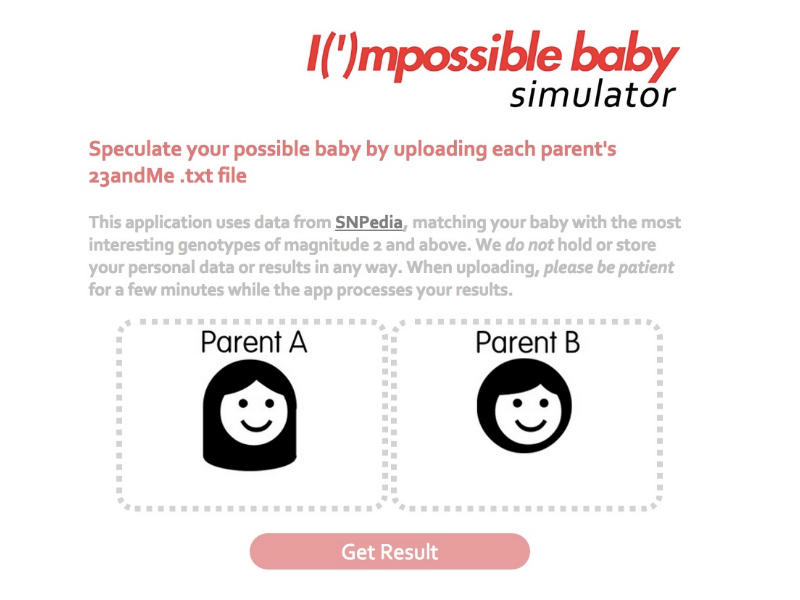 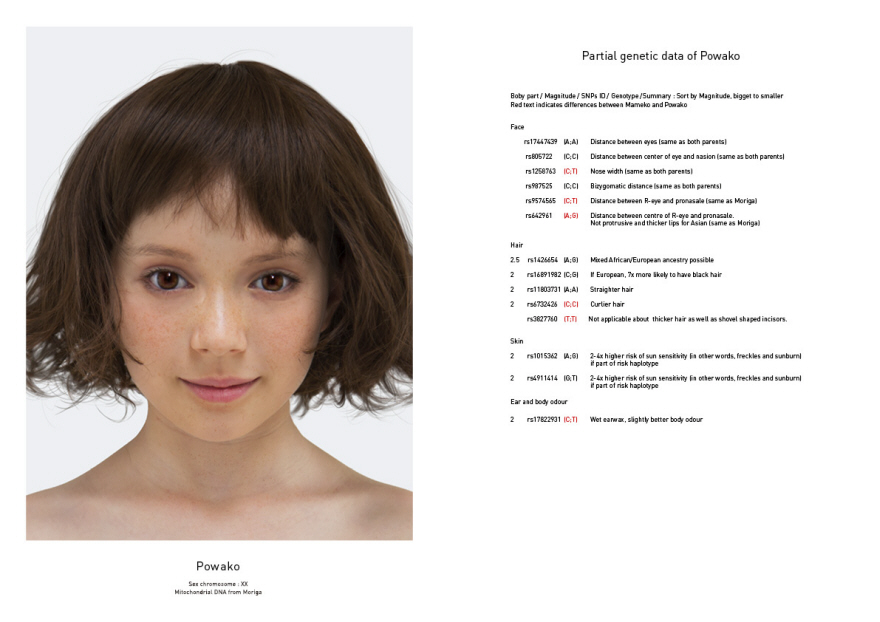 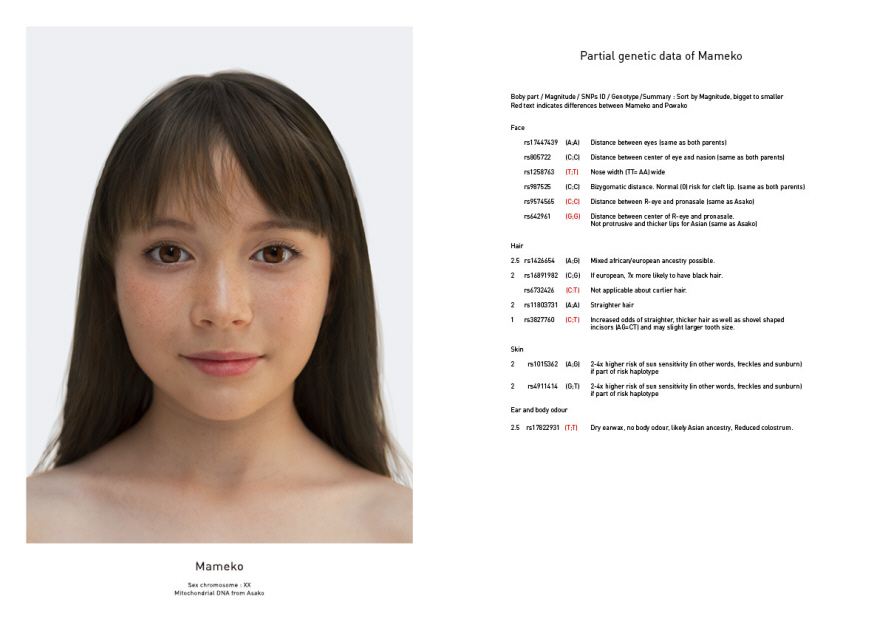 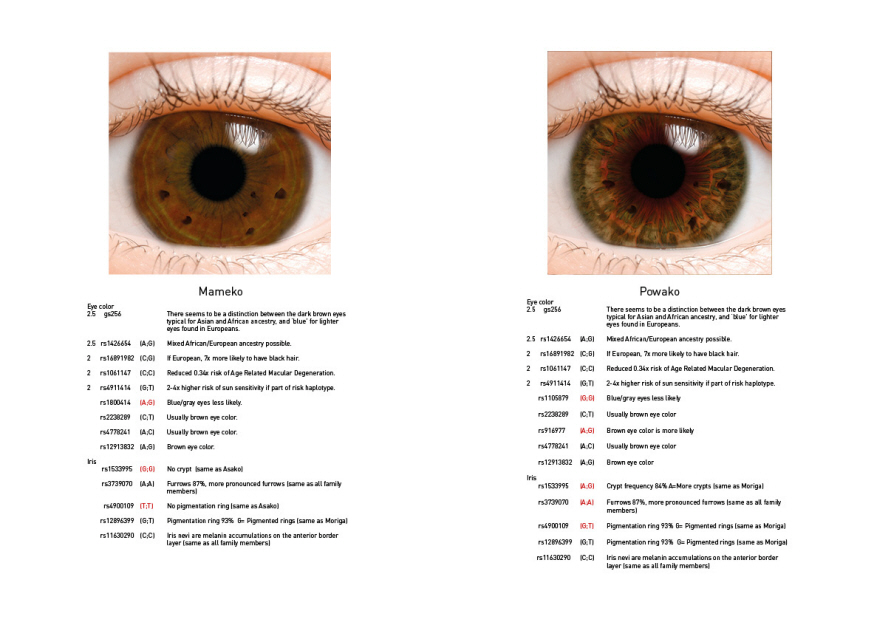 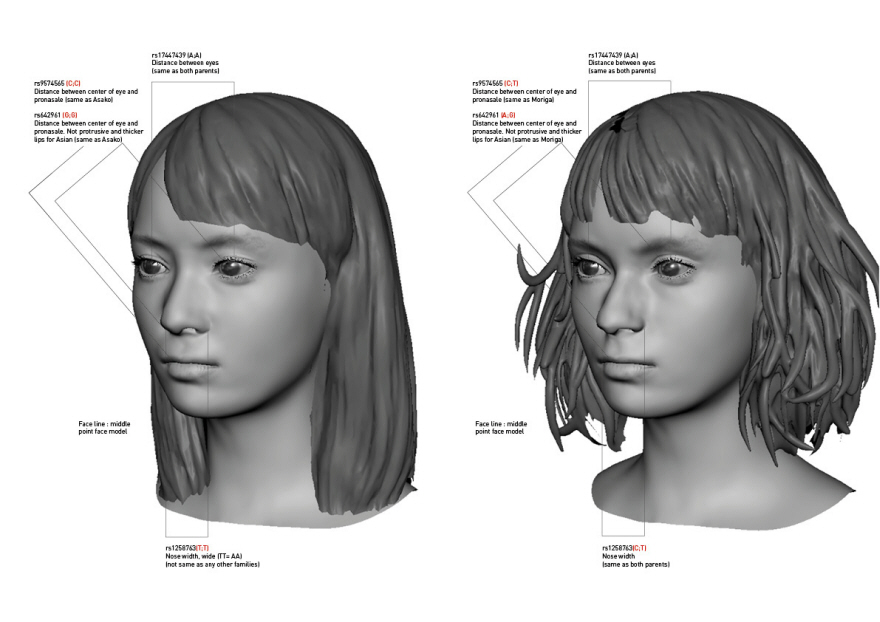 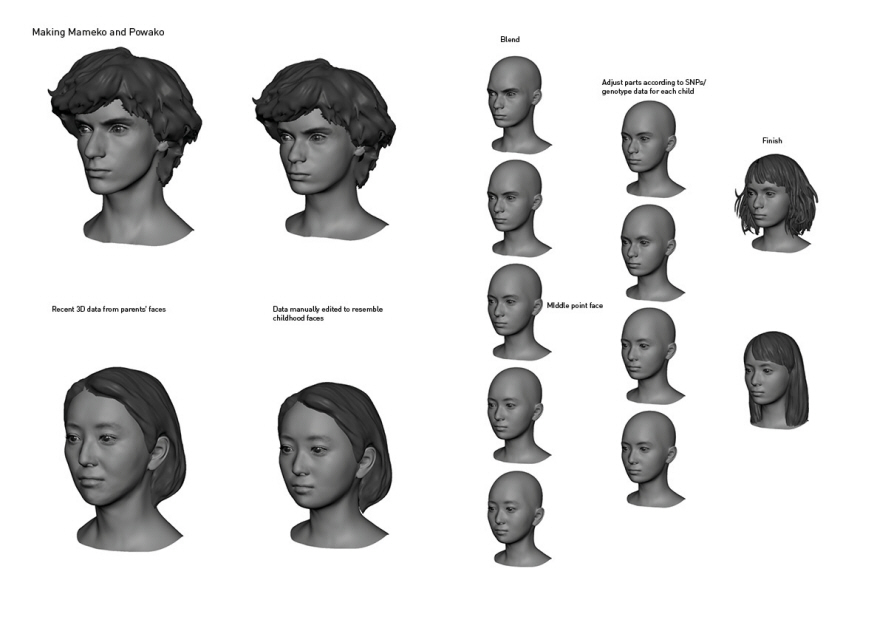 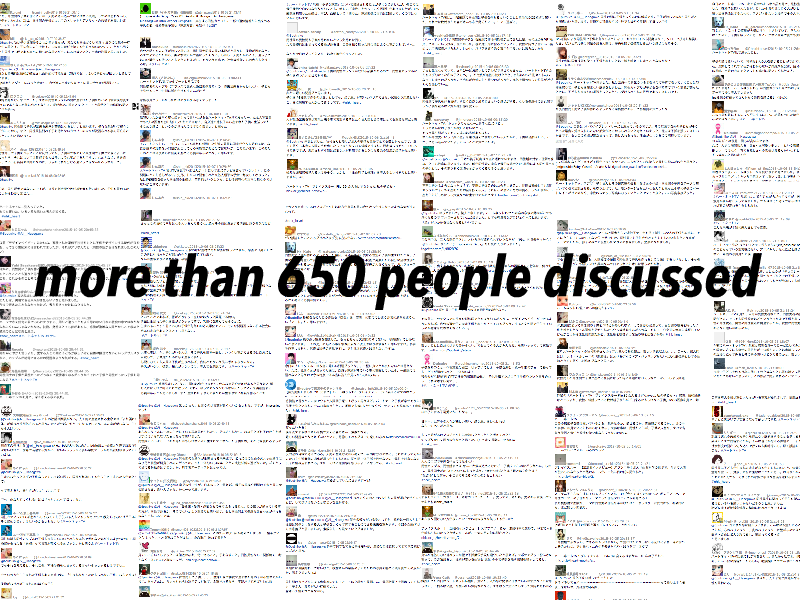 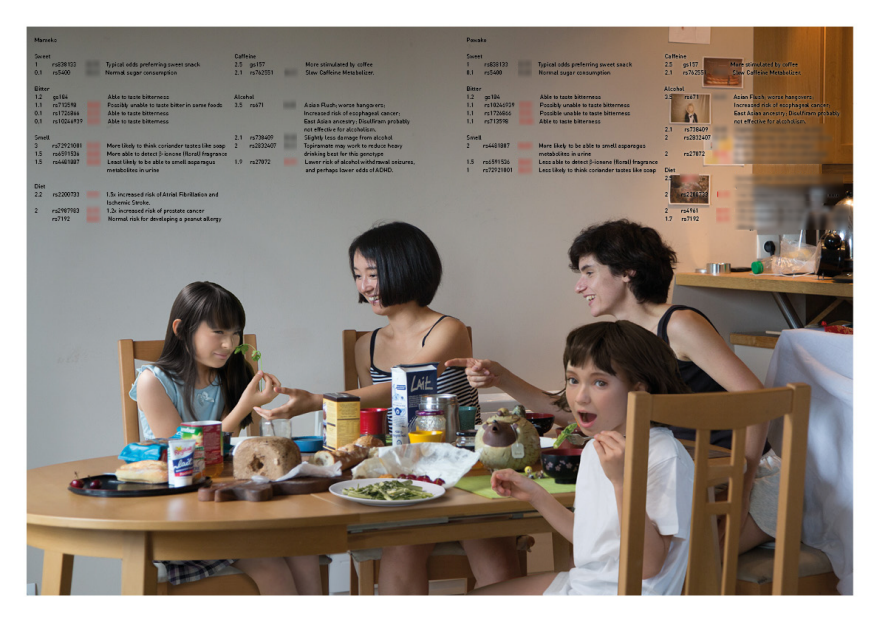 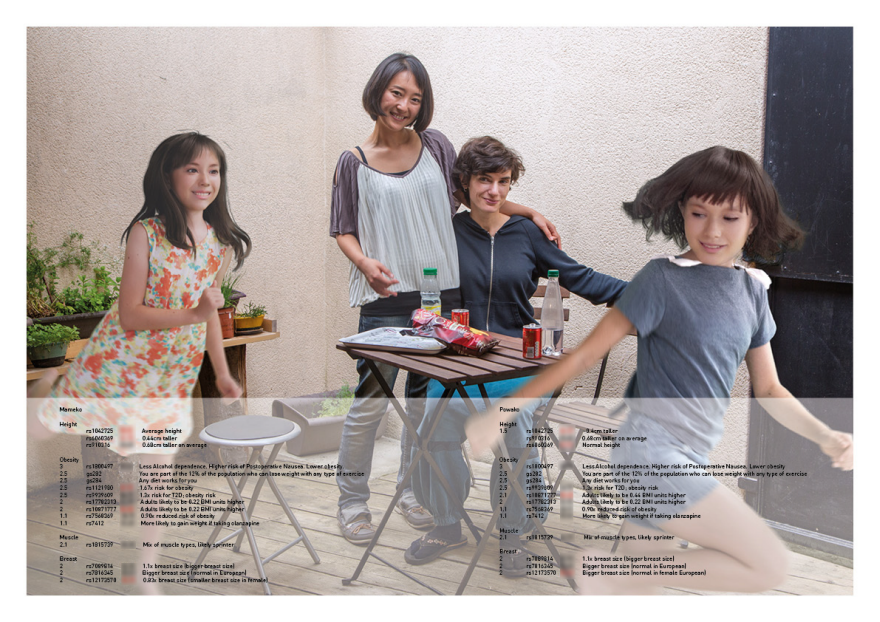 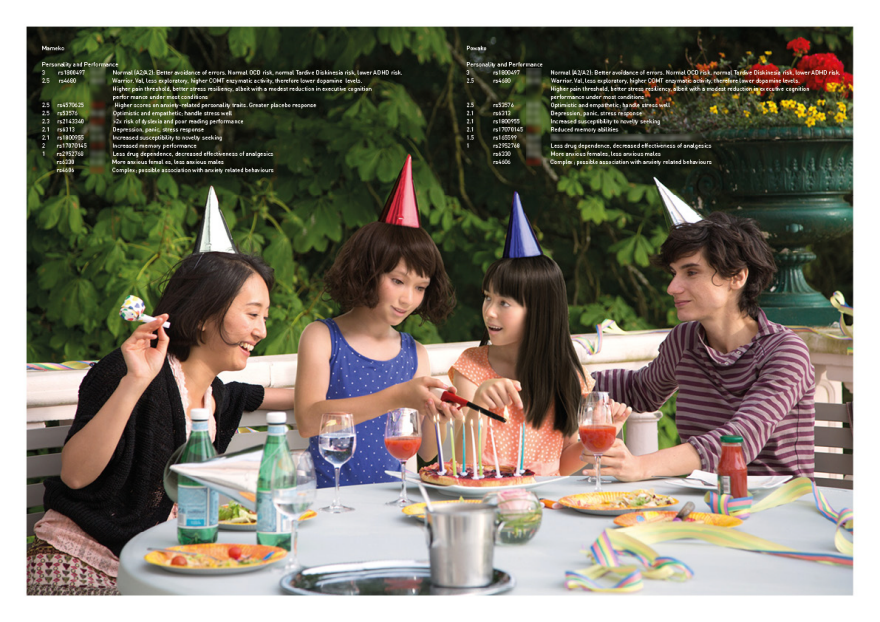 Is creating a baby from same-sex parents the ethical thing to do? Who has the right to decide this, and how?

This project aims to design and inspire debate about the bioethics of producing babies from same-sex couples.

In the first phase of this project, I analyzed the DNA data of a lesbian couple using 23andme to simulate and visualize their potential children.

#1: Find a same sex couple who are willing to retrieve genetic SNP data through 23andme services and share with us.

I developed a program which speculates your possible baby by uploading each parent's 23andMe .txt file

This application uses data from SNPedia, matching your baby with the most interesting genotypes of magnitude 2 and above. The application does not hold or store your personal data or results in any way. When uploading, please be patient for a few minutes while the app processes your results.

23andMe data is only seeing the "single nucleotide polymorphism" that is 1/1000 average in the genome.

The application randomly chooses one spell from one parent's genotype and combine this with the other parent's SNPs data, which is a randomly chosen spell.

The page shows a simple list of Good news, Bad news and Neutral info.User can download the raw data from yellow button. Users are able to use $5 analysis services at https://promethease.com/ if they want to know more detailed analytical data. I also use the service for the visualization aspect.

The SNPedia and a few online articles were the essential tools for constructing the facial portraits of the couple's hypothetical daughters. Difficulties arose due to the fact that current genotype research is still fairly nascent. Since the project's purpose is to inspire debate, not to create facial portraits with 100% accuracy with genetic markers, the results are more similar to "fortune-telling" at this point in 2015.

I then created a set of fictional, hypothetical family photos using the genetic SNP data. The family album was produced as a hardcover album which I presented to the couple as a gift.

In the photo, there are few hints that reveal the related SNPs ID, genotype, magnitude and short descriptions of these daughters.

This breakfast scene shows Mameko sniffing a coriander leaf and making a disgusted expression. Because Mameko has a gene "rs72921001 (C;C)," which means she is more likely to think coriander tastes like soap. Powako is eating an asparagus and looking at the camera with eyes full of mischief. Because she has the gene "rs4481887 (A;G)," which means she is more likely to be able to smell asparagus metabolites in her urine. She is looking forward to smelling it soon at the toilet.

B. Make a documentary film to follow the couple's feeling and guide the discussion.

To achieve more public outreach, I worked with the Japanese national television station NHK to create a 30-minute documentary film which documented the whole process of analyzing the DNA and designing the photo album.

The film also included our interviews of scientists and the married lesbian couple about their views on bioethics.

broadcasted in Japan on NHK, Oct 5,HeartnetTVand NEXT

C. How should we face this rapidly growing technology?

We interviewed two scientists at the Center for iPS Cell Research and Application, Kyoto University (CiRA), a world leader in iPS cell research. Associate Professor Yashiro who specializing in bioethics answered our questions as the following:

Q: "If children had any illnesses specific to using this technology how do we take responsibility? what should be done?

A: "Just like what happened with IVF and artificial reproduction, the safety needs to be tested thoroughly to see if the newborn will be as healthy as others. Until that process is done - no child should be born this way."

Professor Yashiro also added: "I believe that as long as it's a product of a conscientious process to maximize safety and security, it's absolutely fine to make germ cells, be it from iPS cells or ES cells. I don't see anything wrong with same-sex couples having their own children. The biggest priority should be to build a society in which varying philosophies are accepted, and more number of people have the chance for more happiness."

The next place we visited was Professor Kouno, who overturned pre-existing notions on birth ten years ago. He succeeded in creating the first mouse born of two mothers through genetic manipulation.

Q: How did you feel when you made Kaguya? (two-mother mouse)

A: "I was happy but I felt frightened by what I had done at the same time."

Q: Can't you see this as a fertility treatment for same-sex couples?

A: "Well, that's not within the realm of medicine. Fertility treatment, as you just brought up, is about supplementing something that is missing from the person's potential to have a child. For example, the ovary is dysfunctional, or there's a problem with the person's ability to produce sperm—aiding with those is medicine."

Q: Why is it ethical to lengthen life and unethical to create life for you?

A: "Maybe you can have organs made with iPS cells transplanted to yourself, but decisions to have medical treatments can be made by the individual. The client can, with her will, and she can take responsibility for its consequences. But that's not the case with life. The new borns are the next generation...you can't ask for their consent to be born this way. If people start to think that life can be created so easily, I don't know if that leads to a happier society. I don't know myself..."

#5: Collect reactions from Twitter and analyze the comments to make clear the argument points

Finally, the project will analyze and evaluate the public's reaction triggered from this documentary program after it is aired nationally in Japan, and also after it is subtitled and released online, available to more people internationally.

This process would help to design the argument, and I am interestested in exploring how to balance the discussion. We should not "over kill" the people's comments and feelings.

Here are a few interesting points coming from the recent collection of Twitter comments after the documentary program was aired:

If this is not medicine, what is the definition of the medicine? How about the case of Gender Identity Disorder who have had medical operations?

What is the actual meaning and problem of making life from skin cells?

Nowadays, "taboo" lives only in the belief, like a religion.

In the future, we don't need men? No more need for males?

If men are able to make a baby without the eggs, women will be needed only for the surrogacy. Men will think women are like a machine for delivery, more than now.

This might erase the prejudice towards elderly women who cannot deliver a baby.

Actually this problem is all about "how to clear the disgust feeling about homosexuality".

Everyone has the right to make babies. Who has right to say no to this? Same with gay marriage. Everyone should be equal.

To make a baby with technology is a part of the evolution.

Isn't the same to refuse the discussion that saying "this comment is shallow", "old way of thinking" or "non logical" to dissent comment?

Finally, we are diversifying the concept of family. This technology will pull back the traditional idea of a family that is connected by blood.

It started with an interesting question, did a very thorough job of the research, there was public engagement with follow up on the proposition, and had a full trajectory through the project with follow up with different audiences.

It had depth and breadth and didn’t lose its focus throughout. In many ways it is a model for speculative work