Bolle is a new medical breathing appliance for people suffering with Chronic Obstructive Pulmonary Disease (COPD). It offers a less intrusive way of monitoring and keeping track of peak flow levels, and incorporates a breathing exercise programme, connected directly with the user's doctor, to help patients manage their disease over time with a tailored programme specifically built for them.
COPD can leave people feeling breathless even during the simplest of daily activities. With no cure, sufferers are encouraged to monitor their breathing and perform breathing exercises on a daily basis to delay the progression of the disease.
The unique monitor uses microphones to track breathing, removing the need for a mouthpiece and therefore making the device feel much less medical. A breathing exercise programme is tailored between the patient and their doctor, making progression safer and more suitable to the individual, so they can progress in comfort, with confidence. 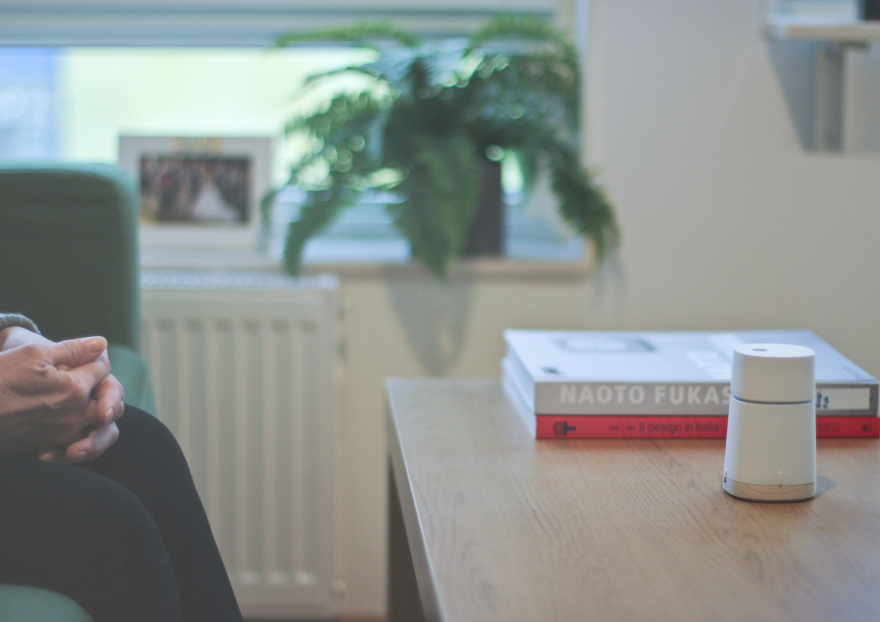 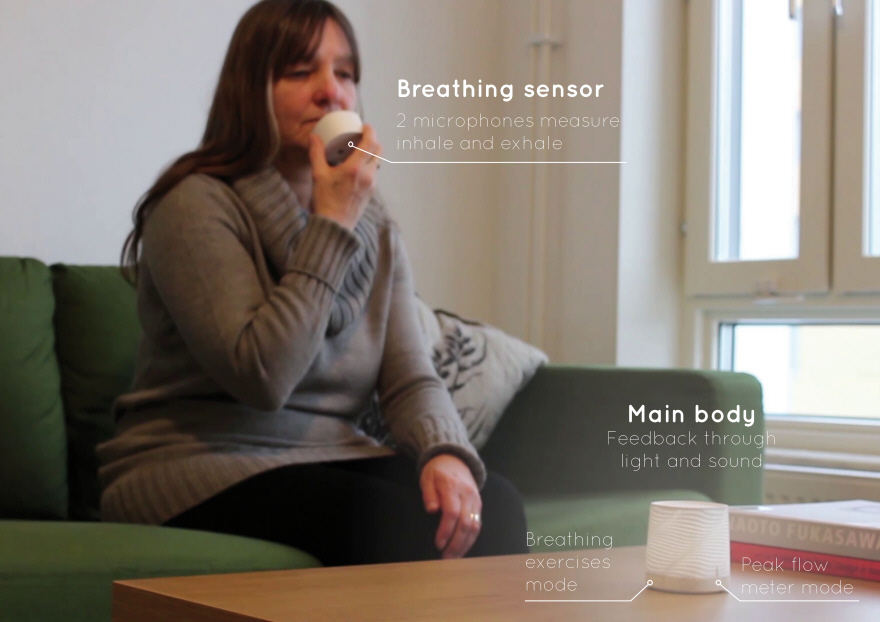 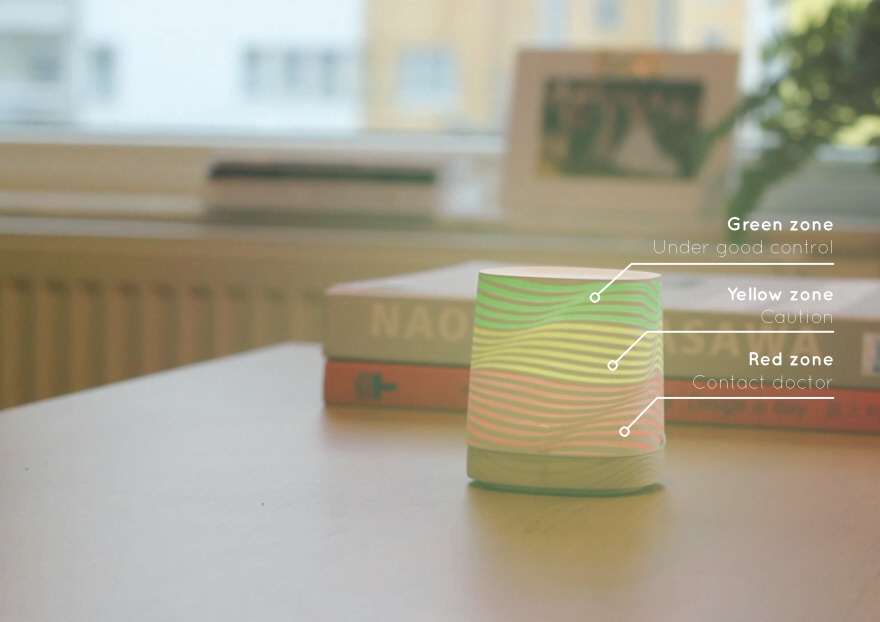 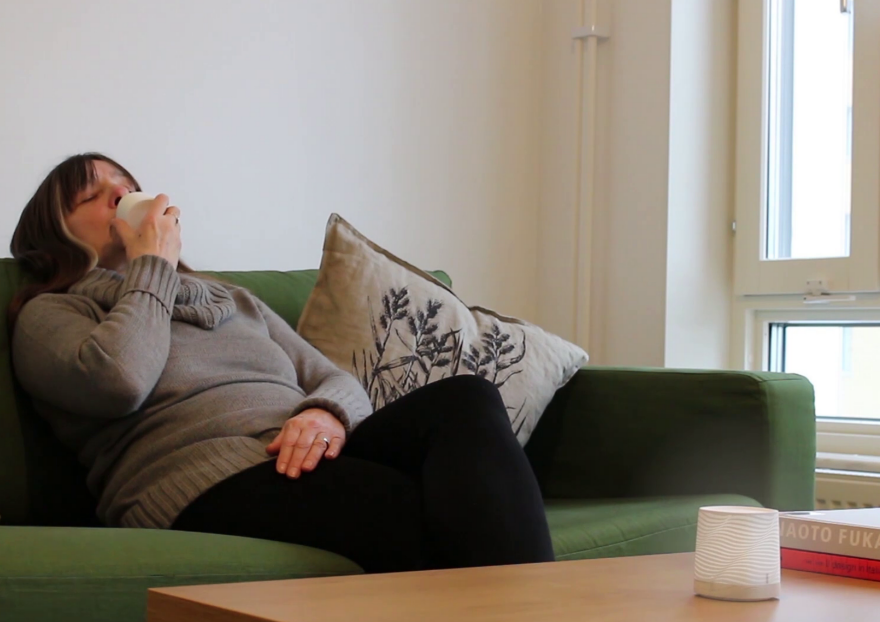 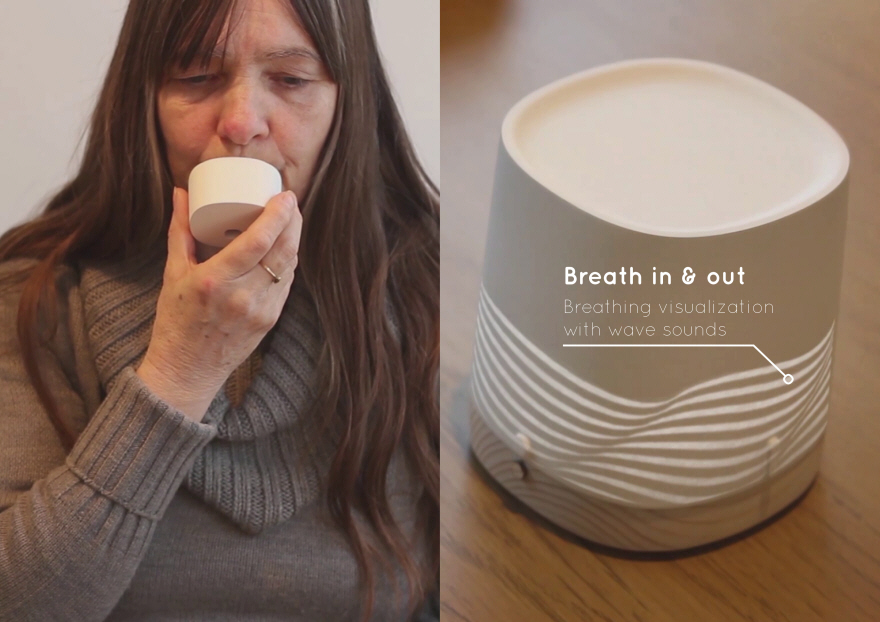 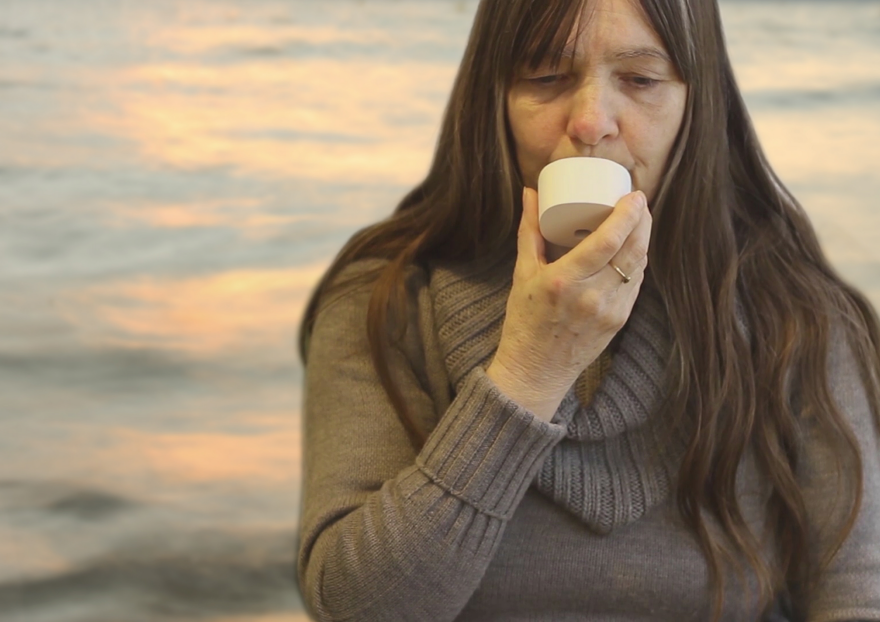 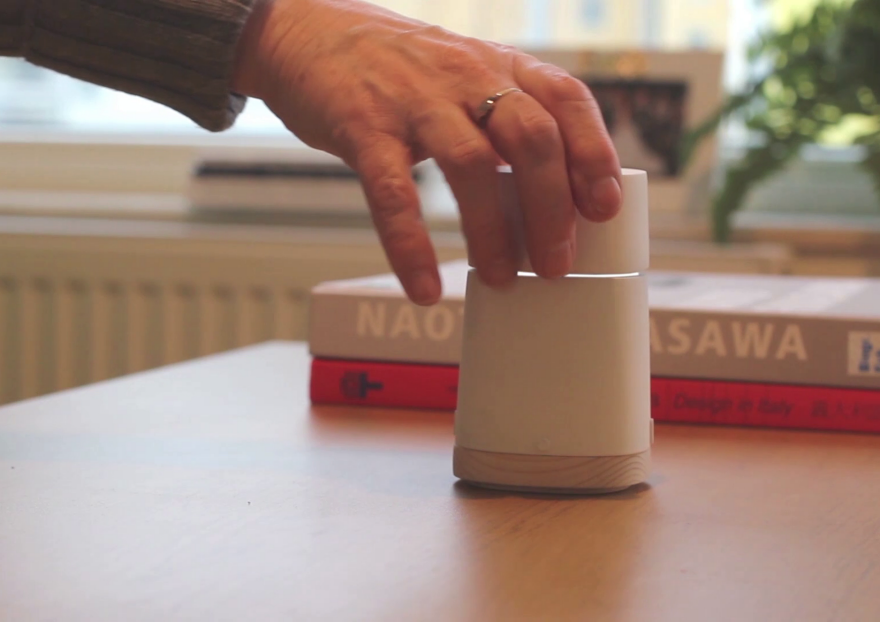 Bolle is a new medical breathing appliance for people suffering with Chronic Obstructive Pulmonary Disease (COPD). It offers a less intrusive way of monitoring and keeping track of peak flow levels, and incorporates a breathing exercise programme, connected directly with the user's doctor, to help patients manage their disease over time with a tailored programme specifically built for them.

COPD can leave people feeling breathless even during the simplest of daily activities. With no cure, sufferers are encouraged to monitor their breathing and perform breathing exercises on a daily basis to delay the progression of the disease.
The unique monitor uses microphones to track breathing, removing the need for a mouthpiece and therefore making the device feel much less medical. A breathing exercise programme is tailored between the patient and their doctor, making progression safer and more suitable to the individual, so they can progress in comfort, with confidence.

The brief
The task was to improve the experience of using a medical device at home. COPD was chosen by the designers because of the wide, damaging effect it can have on so many people; prior to the project it was rated as the third highest direct cause of death in America, behind cancer. The project was collaboration between product and interaction designers and was carried out over 10 days.

The problems with COPD treatment: People suffering from COPD have to start their day by checking their peak flow to see how open their airways are. Existing solutions require the user to purse their lips around a mouthpiece and blow into a plastic tube then write down their results. It's uncomfortable, and no feedback is given as to whether the actions have been performed correctly, which is important for accurate readings. Users are expected to write down the readings they get each day in order to monitor their airways; something many patients can forget or miss.
Breathing exercises are also recommended but no assistance is given with this, patients are told to attempt to practice deep breathing techniques, exhaling for double the length of each inhale, and to slowly increase the duration. It is difficult to do this accurately and, most importantly, keeping track of progress, and leads to people abandoning their attempts.

The intent
Early on in the process we identified that if we could provide stronger feedback using sound and light we could improve patients' abilities to better understand their airways and use the device to also guide patients through tailored breathing exercises, removing the worry many people have over whether they are doing them correctly or not.

We also identified that if we could create a peak flow meter/breathing exercise assistant that felt less medical related it wouldn't be hidden away in the home, and therefore would be more likely to be remembered and be used as part of a comfortable daily routine.

At this point we determined that combining an improved peak flow meter with a breathing exercise assistant could drastically improve the ability for patients to not only understand their airways better, but also help keep track of their progress much more easily, making it simpler to be part of a daily routine.

Being always connected with the patient's doctor enables safer and faster tailoring of their training programme; the doctor can see all meter results and see when part of the programme has been difficult or if progression has been good and then react accordingly.

About the experience: With Bolle there is no need to count you breath in your head anymore, you can close your eyes and travel on a mind journey while exercising your breath. Even though training your lungs with COPD disease is painful, we believe that by shifting the focus from a painful chore to a relaxing moment, breathing exercises would become easier, every day over time.

By adjusting your breath to the wave sounds, Bolle helps you train your lungs in a relaxing moment. You do not focus on your disease anymore; instead, your mind travels to the sea and you imagine yourself lying on the sand near the sea shore, your breath is slowly shaped by the sound of the waves approaching and being taken away.

The process
Initial research: We conducted initial research into COPD to better understand some of the main issues, this helped narrow our focus toward a home device that feels much less medical and incorporates breathing training exercises to help manage the condition over time.

User research: We obtained insights from people with COPD, those who tried breathing training on their own, and those who have been to rehabilitation centres.
We received research papers on less intrusive monitoring systems that would feel more welcome in the home and found the use of microphones to be just as accurate as traditional peak flow meters but need no mouthpiece.

Providing feedback was an important issue, in existing monitors users obtain no feedback as to whether their actions are being performed correctly and it is also difficult to see readings during use. We designed a two-part device to tackle these issues; the top part housing the microphones to record inhale and exhale, and the lower part which gives the necessary feedback can remain on the table, therefore in clear view.

Feedback experiments: Different types of feedback were tested with users and sound was found to be an important factor. This resulted in wave like sounds being used to help guide users through their inhaling and exhaling exercises as it was strongly linked with a calming, rhythmic effect and was found to be easy to keep in time with, even when not paying attention.

Visual feedback was also used; the main body 'fills-up' with light to certain levels which signify the patient's airflow that morning. The colours used match those on existing meters, green for being close to normal level, yellow for some restriction needing attention, and red to seek medical advice immediately.

Form: A soft, simple form was chosen to coincide with the calming feeling we wished to evoke. Clean surfaces were used to show that Bolle is a precision instrument for medical purposes, but on first appearance can't be recognised as a medical device.

The two-part design was chosen to give the patient a much smaller device to hold whilst allowing them to clearly see and hear the feedback being given in the main body which would remain sat on the table.
Below is a link to a short video of the design process:

The Value
COPD affects 329 million people worldwide, or nearly 5% of the entire population. In 2012, it ranked as the third-leading cause of death, killing over 3 million people, and with an aging population in many countries, the number of deaths is projected to increase. With no cure and a progressive nature, rehabilitation and ways to manage the illness are crucial.

Bolle could play a significant role in the healthy management of COPD, allowing both patient and doctor to better predict oncoming problems, give the patient greater control from the comfort of their own home, and give greater confidence in the progress of their rehabilitation, which will also reduce the cost of rehabilitation programmes.

Bolle transforms the tedious and often painful experience of breathing techniques by providing an emotional moment connected to the exercise. This emotional experience, conveyed by light revealed the inner pattern of the main body of the product and by the wave sounds that help to breathe in a calm rhythm transporting the patient to another place, could eventually reduce the focus on the pain experienced while exercising the breath.

As a consequence, the person keeps on exercising because measuring his/her peak flow data and practising his/her breathing techniques is associated with a positive memorable experience, which will lead to a progression over time which can be monitored by both doctor and patient.

Hence, even though Bolle is a home medical appliance specifically tailored for persons with COPD, it could also be used by anyone else that would like to do relaxation breathing techniques: within this context, Bolle is a product designed for all.