Placebos and Culture of Hope

This work, Dummy Pills Work Just as Well, takes the placebo effect as a critical lens to examine the role of hope in the medical context through a series of explorations using different types of media. It advocates creating a culture of hope in medical settings through three chapters:

These chapters refer to three different social and medical contexts in which people form their beliefs about healing: Institutionalized medical system; Beliefs that are deemed superstitious or non-scientific; Everyday life.

The goal of this thesis is to provide a critical reading of the placebo effect through the production of an object that represents and interacts with the body. While this work does not propose the placebo as a cure for all illnesses, it does hope to challenge the mind-body dualism by producing artifacts that interact with both body and mind.

This work poses ethical questions to the medical community. How does the placebo effect inspire us in creating medical encounters that can enhance treatment effects? If patients' beliefs can be managed so that they produce better placebo outcomes, how can the therapeutic effects of treatment be measured and taken into account when designing new systems for evaluating the efficacy of treatments? How should placebo treatments be regulated? How to demarcate the boundaries of the placebo effect without misleading patients and exploiting their hope? 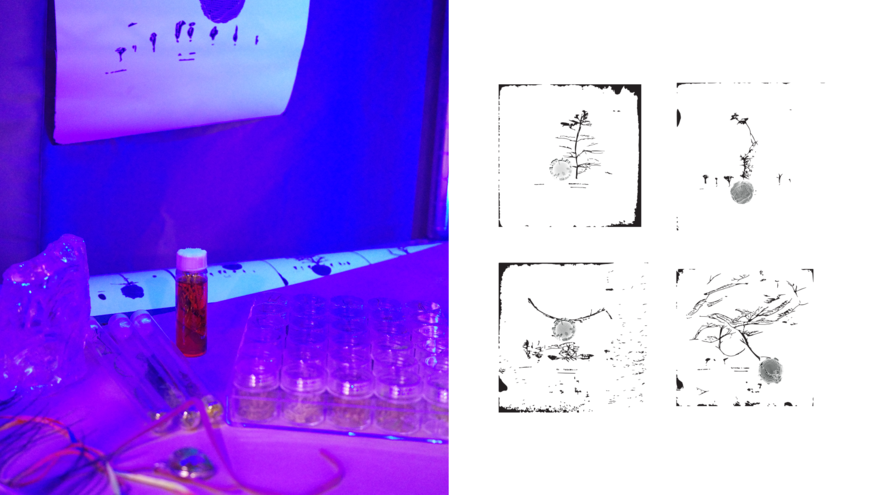 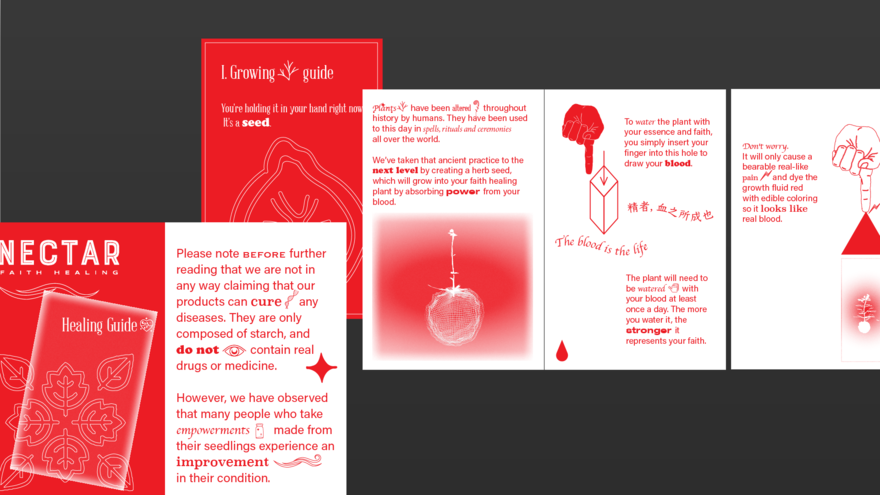 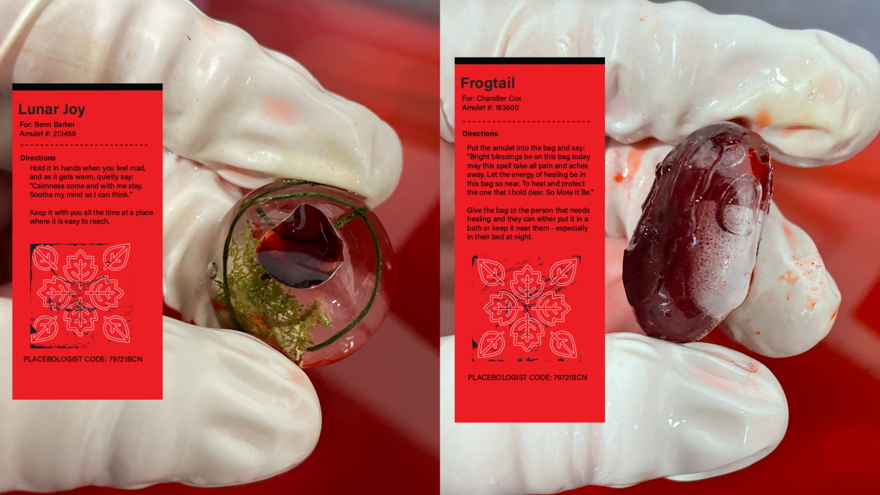 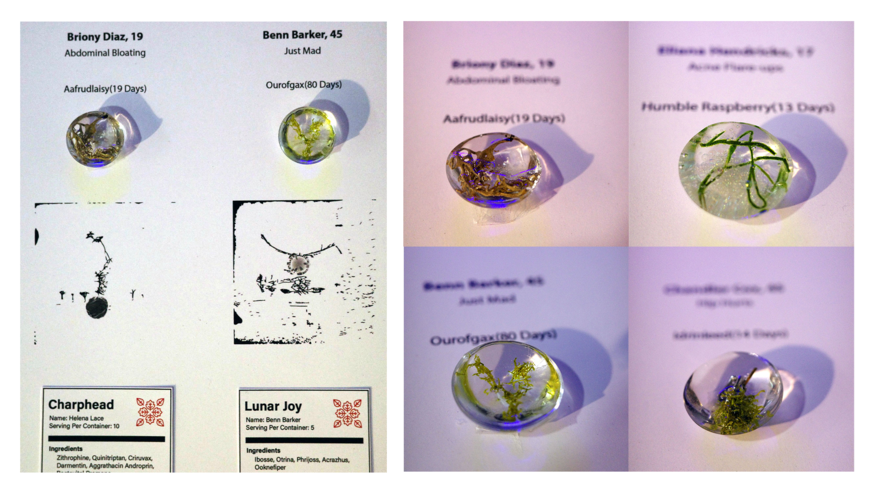 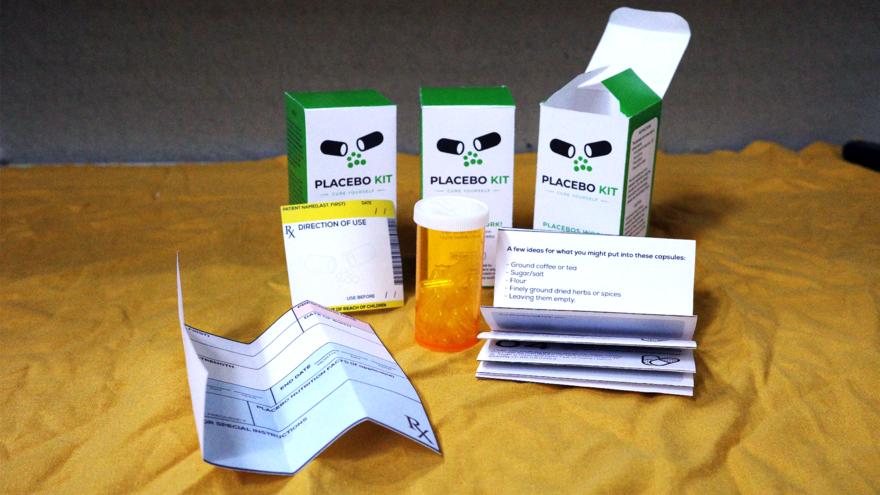 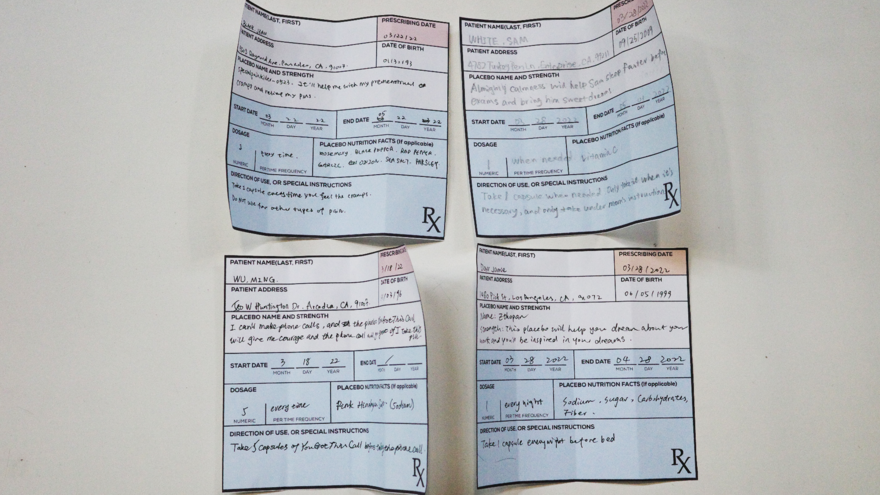 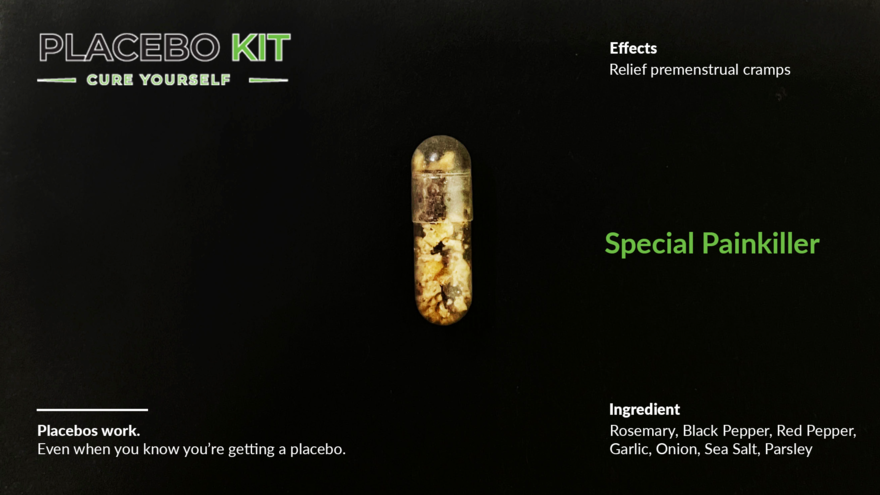 SCENE III: "HOME" The following images are the placebos created by participants. This is a painkiller created to relief premenstrual cramps. It has been difficult for women to get an accurate diagnosis because women's symptoms are likely believed to be "all in your head" or "overreacting." 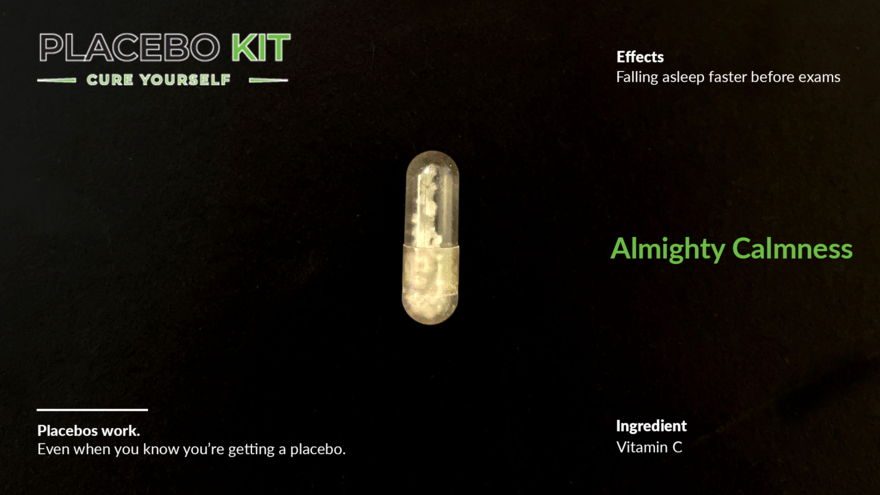 SCENE III: "HOME" A woman created Almighty calmness for her son. Placebo effect can come from the presence of family members. Placebo effect happens when you feel attention and care. 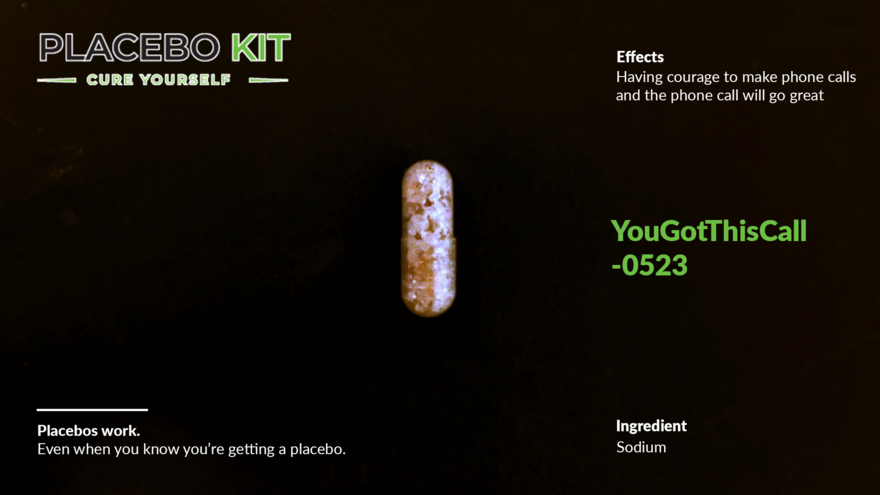 SCENE III: "HOME" A girl who gets headache and short breaths before phone calls made YouGotThisCall-0523. Which part of illness is from the body itself, and which part is from the mind? Is curing the mind seen as part of healing? 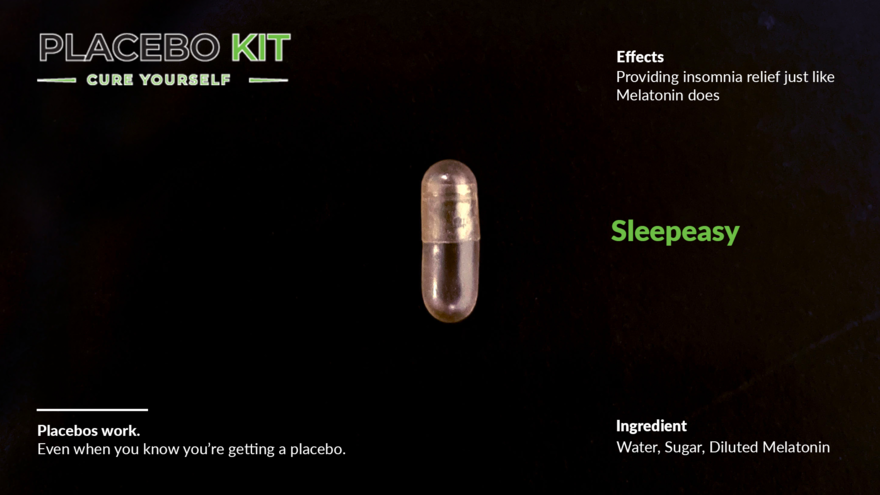 SCENE III: "HOME" Sleepeasy uses diluted melatonin to reproduce Melatonin's effects. If the placebo can condition our mind to believe we are getting sufficient treatment, will this reduce the medical expense for patients?

COVID-19 is a time of uncertainty and change. But there is one constant present: our hope for health.

What role does hope play in our lives? How does it manifest itself in the healthcare system? Where is hope placed? Is it misplaced? How do you keep hope alive when things seem hopeless? Is it true that being hopeful in the face of disease has an effect on one's health?

The placebo effect is an interesting perspective to answer this question.

A placebo is an inactive substance or procedure designed to look like a real treatment. They are also known as dummy treatments, sham treatments, and sugar pills. The placebo may work because the patient has a positive expectation: "I'm getting better because I'm taking this medication." This positive expectation triggers a chain reaction in the brain, resulting in real healing responses with varying effects on pain management, stress management, and psychosomatic diseases.

The term "placebo" has a negative connotation. Placebos are associated with deliberate deception and tricking the patients into thinking they are cured. But they can also be seen as a tool to create an environment of healing by leveraging patients' hope. The placebo effect isn't limited to pills, white coats, or the smell of rubbing alcohol. It's also about doctors' words, smiles, and hugs, other patients' recommendations, and the presence of family members who provide support and care, etc.

Placebos work in exactly the way that hope works.

Dummy Pills Work Just as Well takes the placebo effect as a critical lens to examine the role of hope in the medical context through three chapters.

Medic Lab is a video that demonstrates a fictional diagnosis system which integrates the use of placebos, created based on a research about using language traits to identify placebo responders. It aims to provide patients with individualized placebos, using machine learning models to identify placebo responders, and then tailor the placebo to them based on their personal characteristics. It encourages medical practitioners to perceive illness as a language rather than something mechanical.

This chapter demonstrates how hope is created in the institutional medical system.

Hospitals are the place where people seek the help of doctors and hope takes place in the form of medical knowledge. Both doctors and patients want a practical, scientific cure with the most advanced knowledge available. If a doctor says to you, "I have this pill here. It is a sugar pill, but many people find it helps," you might trust him. After all, the doctor has a white coat and a stethoscope, so he must know what he's talking about.

The symbols of a white coat and stethoscope are placebos that create an aura of authority, and they imply that the doctor is an expert in the medical field and has authority over his patients. The hope lies in a mysterious black box: We can't see inside it, but we know it must be doing something.

As an ineffable science, machine learning is becoming today's astrology: Any concept that is difficult for humans to understand can be analyzed by machine learning algorithms to extract a certain pattern. Is it possible that the source of hope in medicine, which has been associated with magic since ancient times, is our reverence for the unknown structure of knowledge?

The reasons why people visit a hospital are as varied as the patients themselves, but one of the most important functions of a hospital is to provide hope when there is no hope. Therapeutic hope is more than just good wishes; it is provided by professional authority figures. How do we create therapeutic hope by adjusting patients' images, identities, capabilities, and language? By doing so, do we bring more efficacy to the treatment?

In contrast to The Hospital, The Church can be seen as a rebranding attempt of the placebo effect. It is a narrative based installation and a performance, in which I demonstrated the usage of amulets, and invited the viewers to engage in the amulet-making setup. The narrative is:

Nectar is a biotech company that makes custom amulets through genetic design. By using customers' blood to grow a specially bred plant, Nectar is able to test their genetic structure and beliefs through the frequency of blood donations to create the perfect amulet for the customers. The amulet making team is a multidisciplinary team including: Doctor, Botanist, Horticulturist, Diviner, Psychic, Chemist, Gastronomist, Psychologist, Geneticist, Anthropologist, Historian, Magician, etc., which shows is an opportunity to bridge different types of knowledge together.

In this chapter, therapeutic hope is a modern interpretation of the ancient rituals, amulets, and talismans that have been used throughout human history as powerful objects of protection, good luck, and healing. However, with the rapid development in modern medicine over the past recent decades, amulets have been labeled notorious for quackery and pseudoscience, and the fact that they did make sense in their own context is silenced.

While this chapter is inspired by amulets, it is named "The Church", which connotes both spirituality and religion—more specifically, beliefs that are deemed superstitious or non-scientific. Hospital is where we seek cure from, but when we suffer from pain and despair, we seek consolation from "the church." It reminds us of what is missing from the hospital: a promise that we can overcome what is impossible and be free from pain and despair.

In essence, medicine and religion are inseparably linked. It is revealed in this project by the use of metaphors. For example, the use of plants is both magic and medical; the use of blood is both taboo and scientific; and donating blood is a medical practice, but can also be seen as a sacrifice. In addition, a machine-learning algorithm generates the plant diagrams in the amulet, as well as the accompanying medicine names. This is an attempt to expand on medicine's traditional reliance on scientific practices by bringing together superstition and magic with science.

The last chapter "Home" demonstrates the use of a placebo kit. It is a do-it-yourself kit that enables you to manufacture your own placebos and a series of videos that promote the placebos that are created by the users.

This chapter attempts to integrate aspects of psychology, physiology, and spirituality into everyday life. Based on research about open-label placebos, the placebo can have a therapeutic effect even if the patient knows that they are taking placebos. This research is the grounding of this scenario. "Placebo works even when you know you're getting a placebo" is written on the packaging and serves as a promotional tagline.

By involving users in the process of making placebos and collecting the placebos they make, this chapter exemplifies how people are inspired to create their own therapies through design, and how they can share these experiences with others. For example, someone who was often disappointed in seeking medical treatment for IBS designed an IBS placebo for herself, combining her own diet and daily routine. A mother designed a placebo for her child to prevent insomnia before exams. A socially anxious girl designed placebos for herself to prevent the phobia of making phone calls. A loving husband of a mental disorder patient designed a placebo for himself to relieve the guilt of not being able to help his wife. By designing a placebo and giving patients agency through this process—for example, asking them to name their placebo, and share placebo with others—it creates positive effects. The placebos created by participants collectively form a log of hope and become a critique to the current medical system.

Compared to the first two chapter, Home reveals that placebos are about self-agency. Placebos are about taking control of your health and being able to make your own decisions and becoming more aware of how you can affect and be affected by others.

Using scientific discovery as the theoretical foundation for the design, this work uses design to propel technology to the future. It regards medicine as an artistic subject, and through artistic thinking, it tries to explore the future of medicine.

The significance of placebo research is not only in demonstrating the power of the mind to change a body, but also in revealing a fundamental truth about being human: We find meaning in everyday encounters. The placebo effect needs to be understood outside of its medical context, which encompasses not only doctor-patient interactions but also social and cultural contexts as well as larger networks of belief systems. In this sense, the placebo effect is an insight into what it means for something to be considered, "medicine," and by extension, what it means to be thought of as the human experience.

The creation of therapeutic hope is at a space where the scientific, the objective, intersects with the spiritual, the symbolic, and the subjective. The in-between space usually takes forms of the unknown or underground, which is exciting to explore and design for, which is challenging because it involves working with things that are not clearly defined or understood. But it will be inspiring and meaningful because it bridges the gap between different systems of knowledge.