Before man-made objects consume the last wilderness, the construction expanders and environmentalists continue to have conflict and discord; in the cities, various technological products and buildings are constantly being produced, pursuing a faster, better, and more precise future world. At the same time, the natural resources plundered by humans are gradually being exhausted.

But, the emergence of groups of giant saboteurs — called Dynamic Beings — threatened to change the social order that people are accustomed to. Different from superposing or protecting the existing ecology, and by destroying man-made objects from land and underneath, those ubiquitous creatures obstructed the urban expansion, attempting to trigger a new circulation pattern in the near future world. 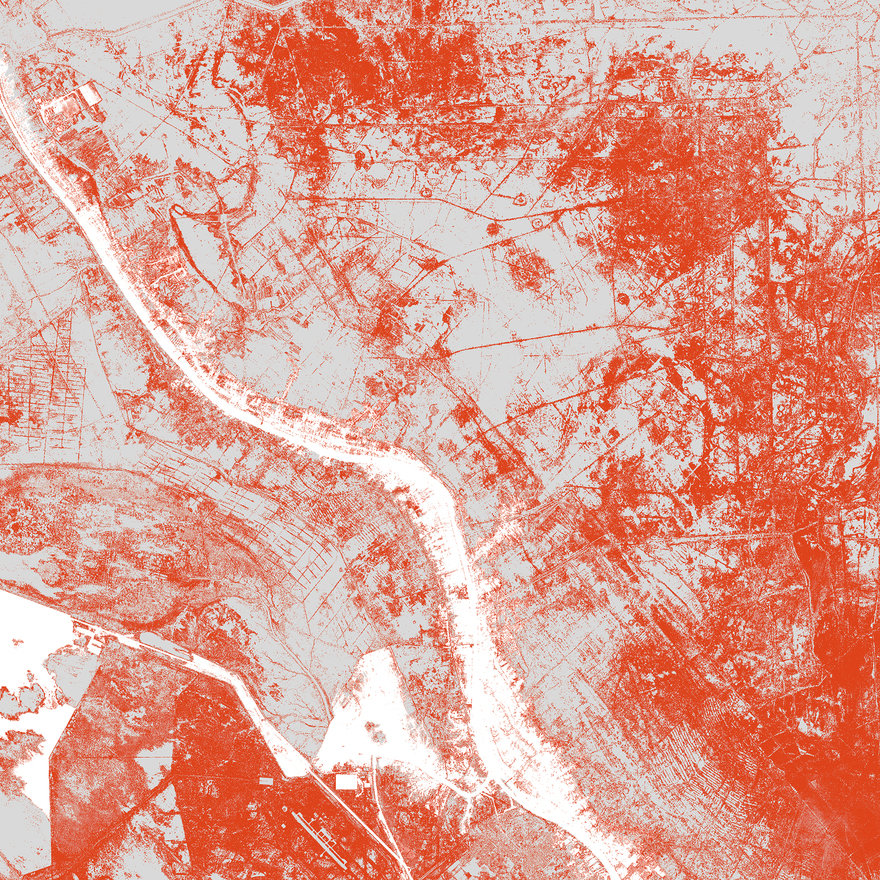 Normalized Difference Vegetation Index (NDVI)
NDVI is a numerical indicator for assessing the plant growth status of a region. By deriving the wavelengths and amplitudes of the red light and near infrared ray, the growth density of green vegetation can thus be quantified. [1] 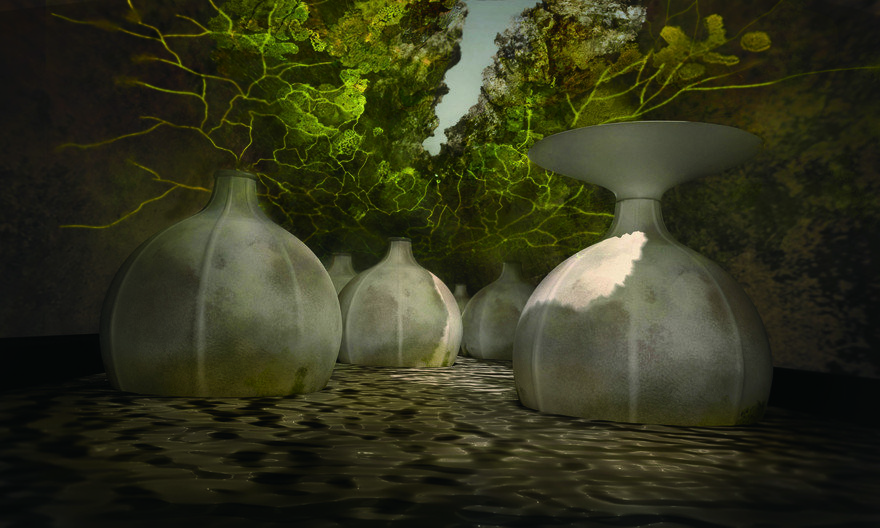 "Aquatic Dynamic Beings" and infected sewer tunnel Flocking in sewers, Aquatic Dynamic Beings regularly receive NDVI data from satellites. When the plant growth status value of the surrounding area is too low and the surface green vegetation is lacking, in order to hamper the urban expansion, the forefront leader will call out high-pitched screams, prompting the group to spray liquid onto the sewer tunnel wall; at the same time, its calls summon "Terrestrial Dynamic Beings" on the surface, and they exert powerful impact to crack the ground. 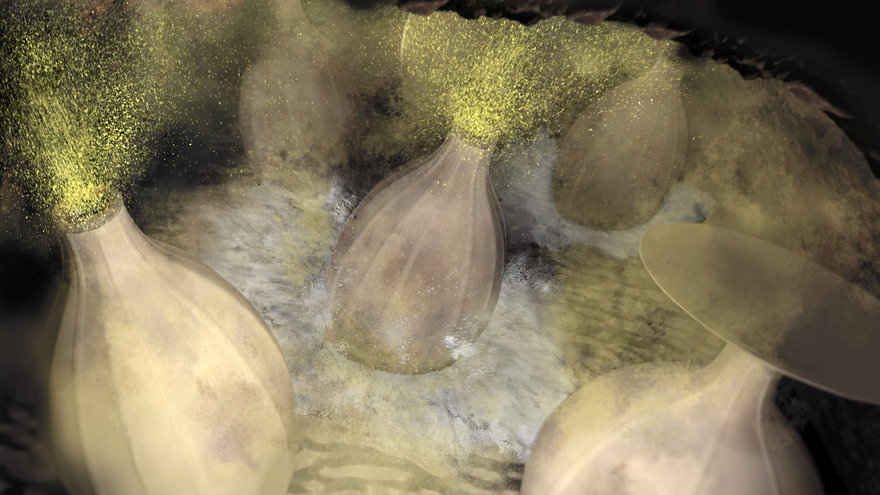 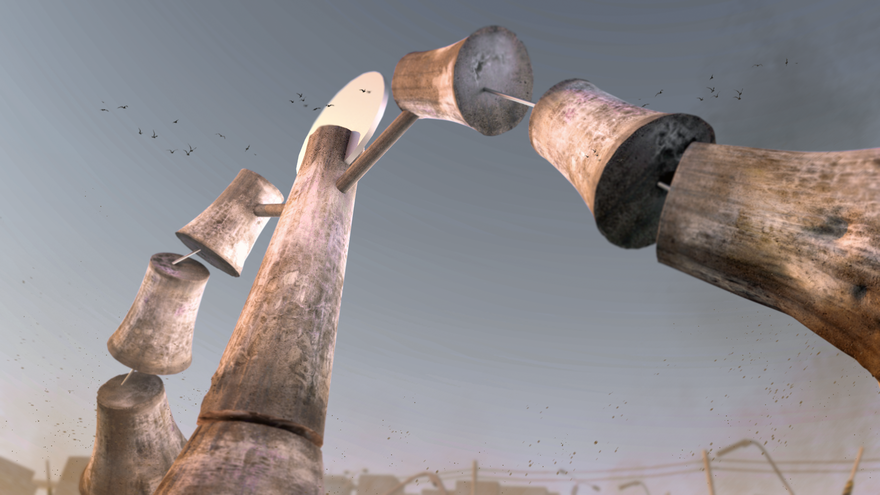 "Terrestrial Dynamic Beings"
This behemoth — towering over eight-meters tall — moves its heavy body to where it is needed, in response to the cries of Aquatic Dynamic Beings from beneath the ground. By lashing its torso, its segmented trunk-like arms brandish vigorously, striking and destroying man-made objects in the cities and demolishing surfaces that have been eroded by bacteria and acid from beneath. 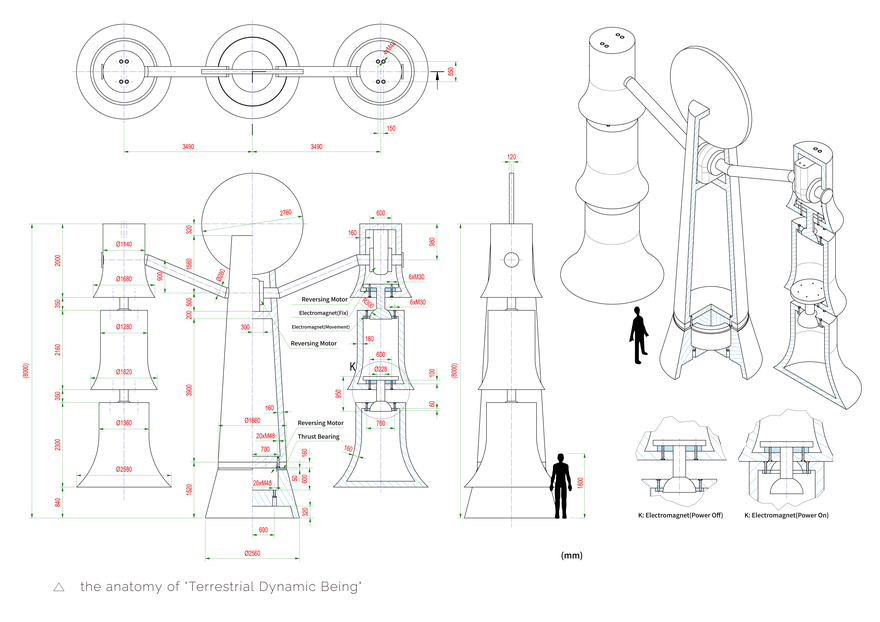 Anatomy of Terrestrial Dynamic Beings Humans disassemble and analyze the malfunctioning Dynamic Beings that are no longer operating to understand how they work. However, where these huge saboteurs — those tramping the cities in large numbers — came from is still unclear. Is it the self-evolution of machinery? Is it the clean-up mechanism to offset the overdevelopment of human society? Is it the work of extremists? Or is it created by intelligent creatures other than humans? There are still controversies over this matter. 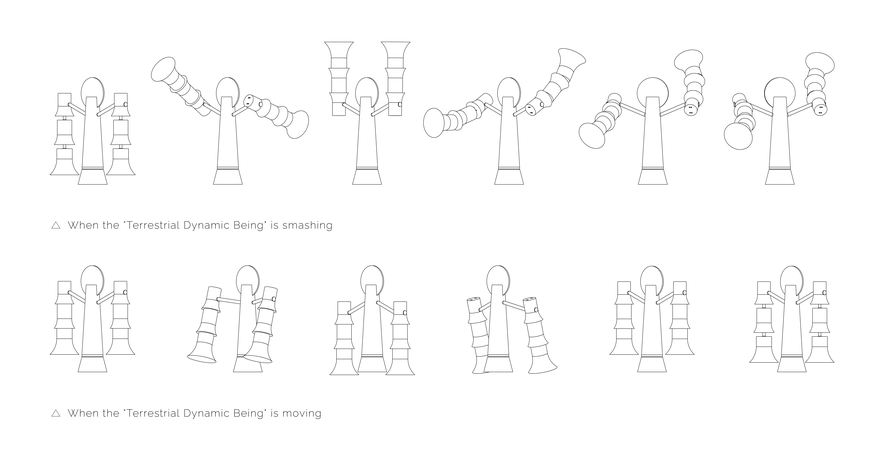 In the near future, huge saboteurs appear and roam the world, they spread all over the lands and underneath in large numbers, going to areas with insufficient green vegetation, upsetting urban expansion by smashing man-made structures and demolishing the roads — they are called "Dynamic Beings".

"Aquatic Dynamic Beings" in the sewers float in clusters and receive NDVI data from satellites regularly to detect the amount of vegetation coverage. When the value of the surrounding area is too low and there is not enough green vegetation on the ground, the leading Aquatic Dynamic Being will emit high-pitched screams, prompting the group to shrink forcefully and spray liquid at high speed like whale spraying, eroding and weakening the concrete structure with bacteria and acid.

The eight-meter-high "Terrestrial Dynamic Beings" on the road, set out upon hearing the screams of Aquatic Dynamic Beings from underneath, and flocking to the location on land. They brandish their segmented trunk-like arms, smashing man-made structures in the cities and demolishing roads and surfaces that have been eroded by bacteria and acid from beneath.

Echoing the Megafauna Millions Years Ago

Humans have gradually realized that the role of this Dynamic Beings in their contemporary times seems to echo that of the megafauna millions of years ago [2]: to cause destruction of vegetation by trampling and consumption, to facilitate the ecological material cycle and biodiversity in the habitat; while Dynamic Beings destroy man-made concrete jungle and create ecological niche for the migration of organisms other than the human. Although it causes some inconvenience for humans, it also creates a landscape without concrete buildings and asphalt roads, an environment conducive to the survival of organisms.

The Daily Life in the Near Future

Water spray erupts from underneath, street lights fall over, and roads crack, accompanied by low roar rumbling footsteps and high-pitched calls … the daily happenings in the near future world.

However, are we willing to live in such a world?

The answer is probably negative.

We speculated the existence of Dynamic Beings, but ambivalently hope that Dynamic Beings will not appear and shake our peaceful and stable daily lives.

Such a world seems surreal, but not impossible.

The Pleistocene ecological environment gave birth to the vigorous megafauna and altered the balance between woody and herbaceous vegetation. Perhaps the modern lifestyle that is depleting the limited resources would be the driving force behind the emergence of Dynamic Beings and the destruction of man-made objects.

In the World of Dynamic Beings

When the tweets of Dynamic Beings reverberating in the cities, masking the music playing in our earphones, when the weird behemoths several stories high show up before our eyes, would we recall the memories buried deep in the collective subconscious of our past, of those giant animals that our ancestors had confronted?

Would we be afraid, or do we want to conquer?

Would humans be more determined to reject everything that does not conform to their urban rules, or would they choose to make changes and rethink the established social operation practices that we have long been accustomed to?

Is our imagination of the future — clean and bright streets and roads, artificial intelligence that takes care of everything, all the humans need to do is staying at home and experience life through virtual reality — predestined, or are there other possibilities?

Perhaps, in a world of Dynamic Beings, speed and efficiency are no longer the only criteria for value judgment. Perhaps, in addition to construction companies, there may will be destruction businesses as well; houses are no longer real property but rather movable property. When destruction becomes part of the daily life, the environment in which humans live will be very different from that of the current social structure.