Neuroscientist Björn Merker, explains human consciousness, as a set of three parts: the ego, the body and the world. So it's the realization of the self in the mind, the body that contains that mind and the world in which is located. There, he adds something he calls "visual aperture" in which he suggests that we only see, or perceive, a fraction of what the world and the body is. And that statement introduces the inevitable question: what are those things that make up the world, and that we cannot perceive?

Trying to answer that question, Anil Seth, a professor from the University of Sussex, says:

"We don't just passively perceive the world, we actively generate it. The world we experience comes as much, if not more, from the inside out as from the inside in. In fact, we're all hallucinating all the time, including right now. It's just that when we agree about our hallucinations, we call that reality."

Anil Seth, suggests that the construction of reality depends on every individual. It's determined, among other things, by our capability to perceive the world, that comes from the senses every individual has.

Knowing that, we can understand that if an individual has at least one different sense from another individual, their perception of reality will change, and that is exactly what happens when we compare different animal species who possess different senses to humans.

Interface is an exploration on how to change the human perception of reality. The masks swap a human sense with a non-human sense inspired by three different animals - which enables us to embody the way these other creatures perceive the world.

Echolocation: Inspired by bats, this mask simulates the feeling of bouncing sound waves, making i t possible to feel if there's anything in front of you and how far away it is.

Infrared Sensing: Inspired by pythons, this mask enables you to feel the infrared emissions of external bodies, allowing you to sense if other nearby creatures are alive or not.

Geomagnetoception: Inspired by sea turtles, this mask can make the user feel the different latitude and longitude coordinates in the world, allowing humans not only to know where they are in the world, but to feel it.

The development of this project showed up an interesting finding, trying to fit this inside the mixed reality spectrum, it's clear that it doesn't fit in there, because in the current definition of mixed reality, digital layers are added to the conventional reality, in order to create things as augmented reality or virtual reality, however, Interface doesn't add any digital layer, instead, adds a physical layer that is "invisible" to the human senses.

That's why, as a conclusion for this project, it's being proposed to expand the current definition of Mixed Reality, adding a new field called "In-Depth Reality", in which designers, engineers and academics, can develop knowledge and technology around it. 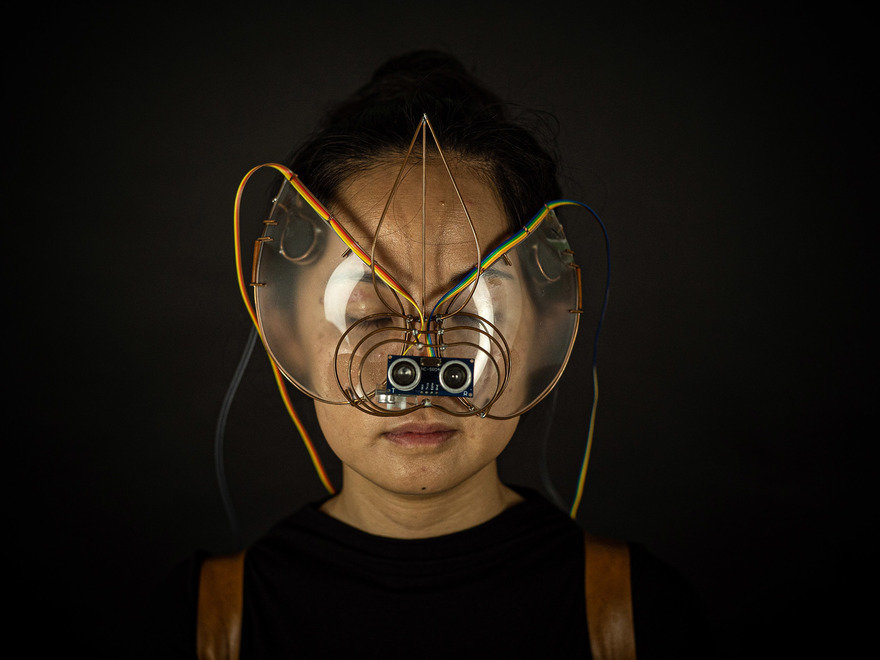 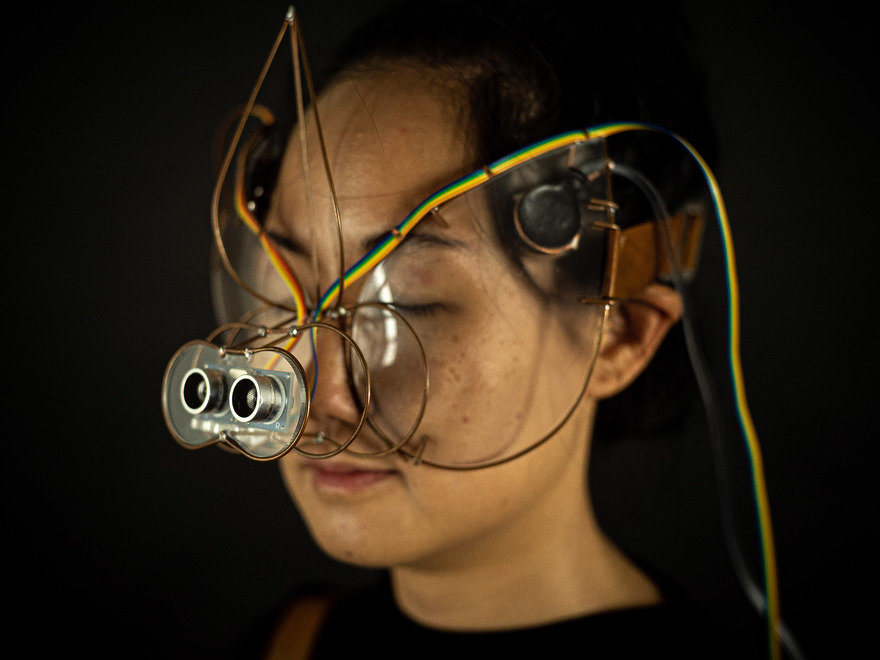 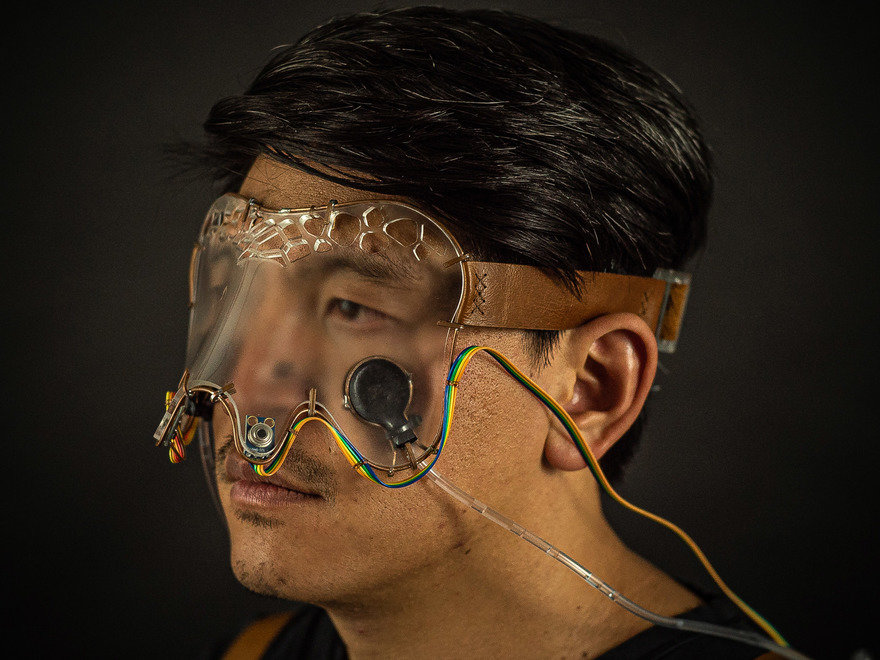 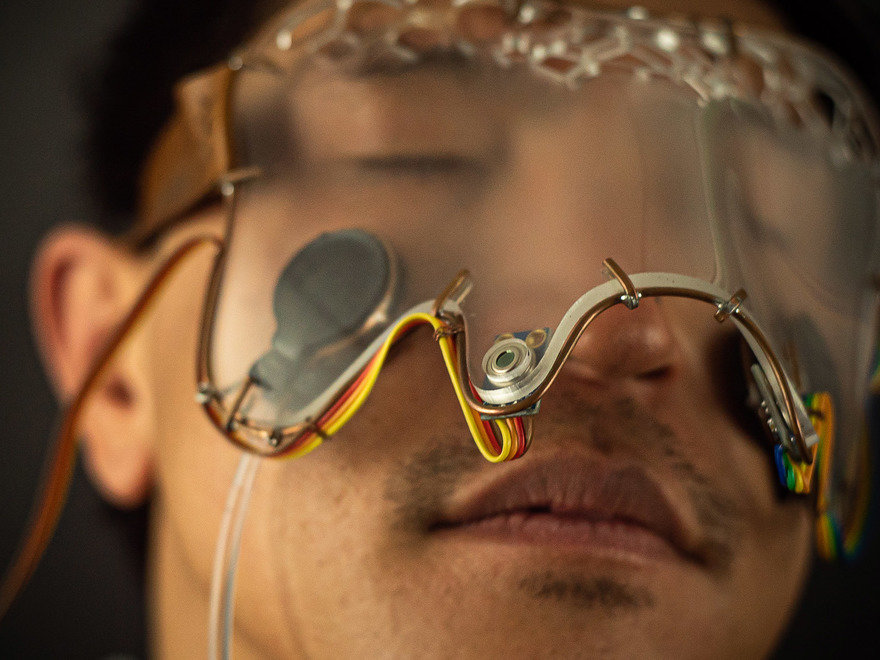 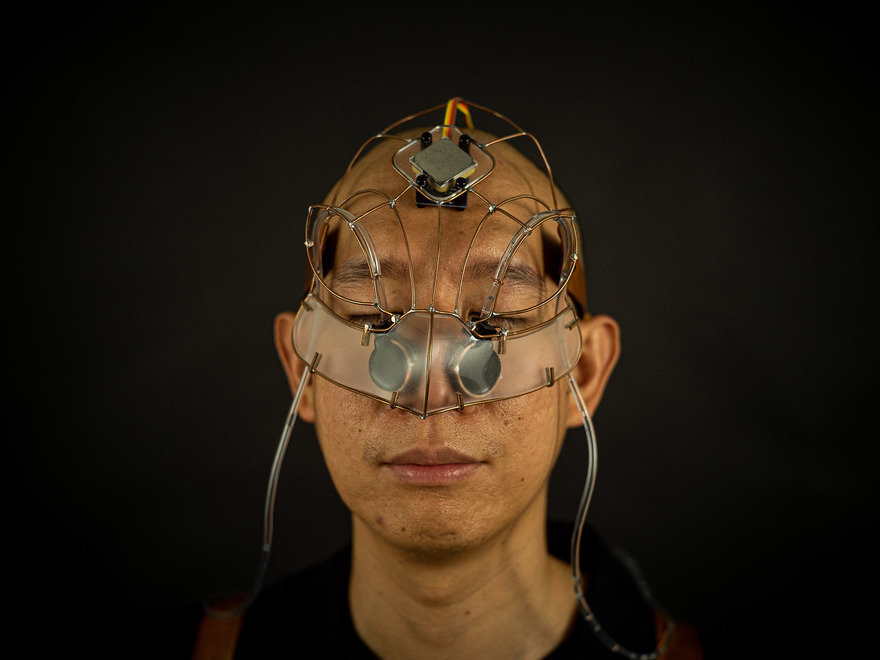 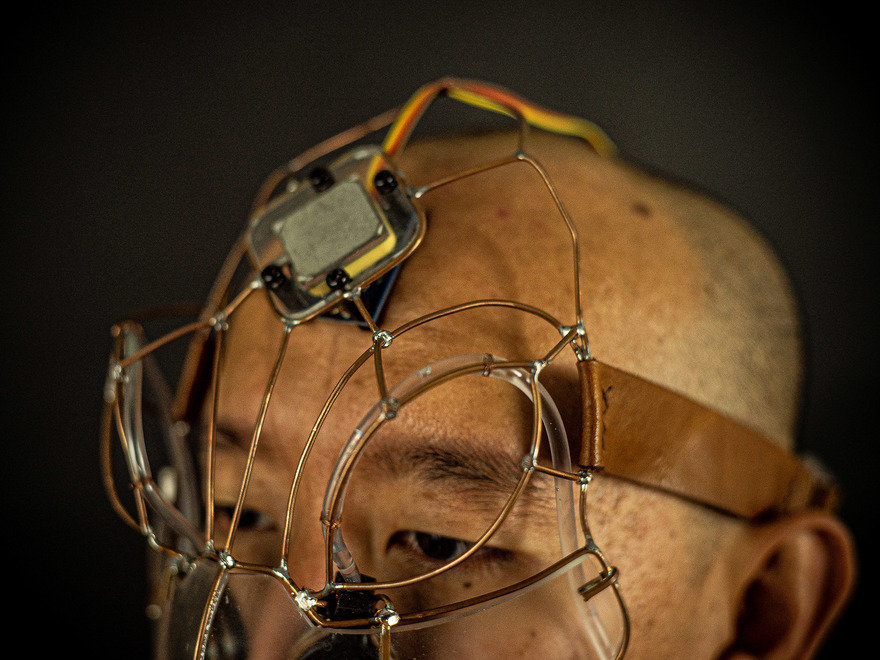 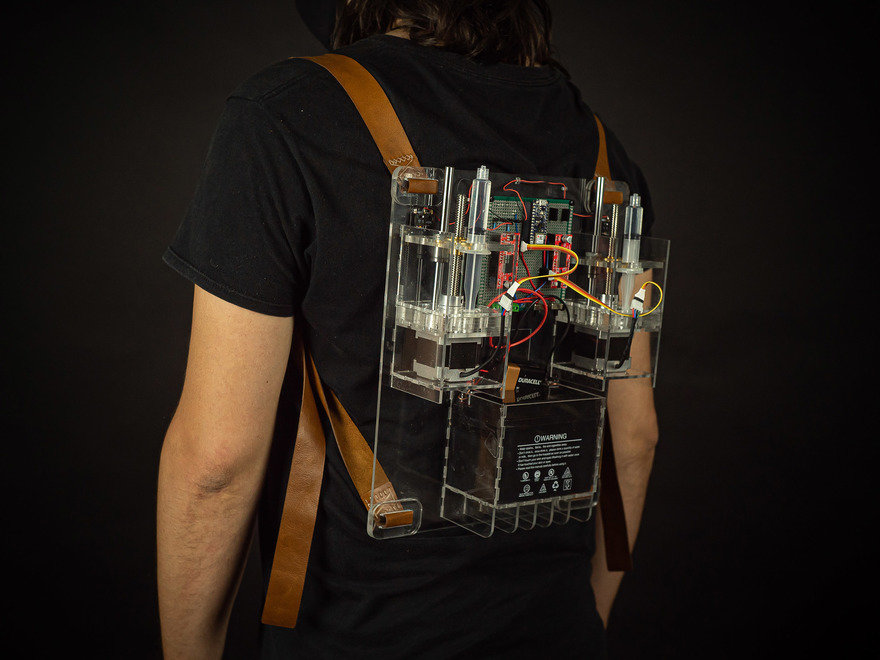 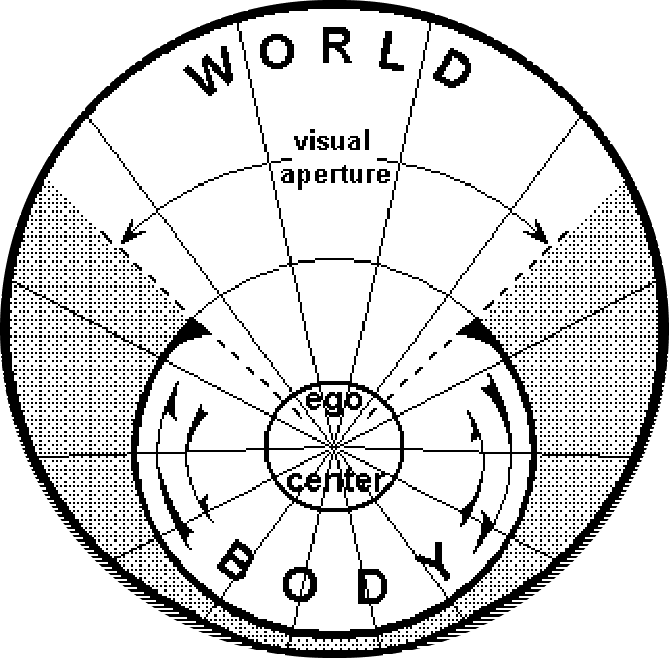 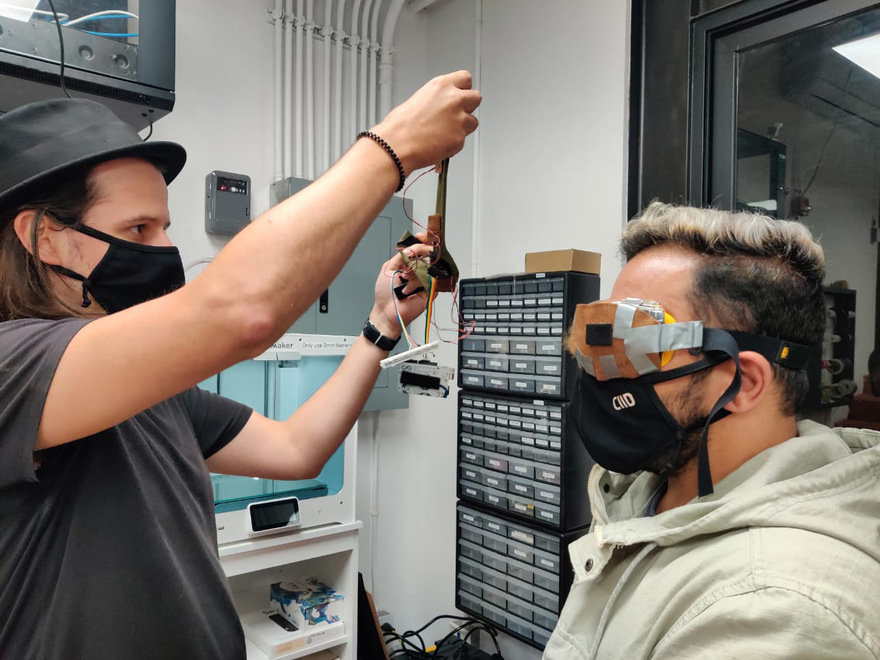 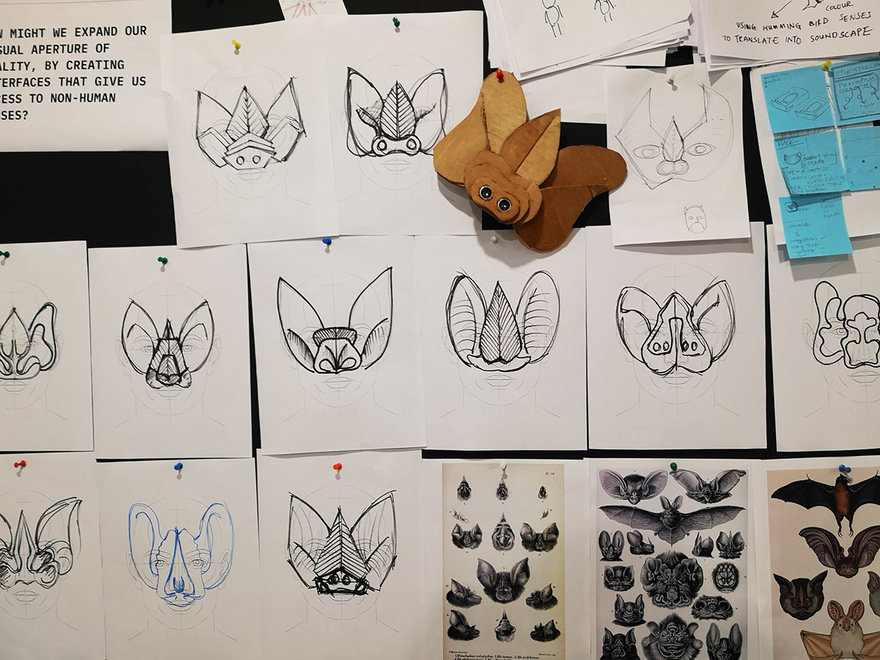 The project started with a research on what human consciousness is, and the neuroscientist Björn Merker explains it using a model of three elements, the first one is the ego, this part is related to the mind, the realization of the self. The second part is the body, that is about the understanding and recognition of the self physicality, which are the dimensions of the individual. And the third part is the world, this one is dedicated to understanding and recognizing the surroundings of the individual. These three elements, together, form the entire spectrum of what consciousness is.

In this description, Merker shows something that he calls "Visual Aperture", that is being described for the world, and what he means with this, is that the world is formed of many things, but the individual is only capable of perceiving a fraction of this.

During the primary research, Chavarría interviewed a person who describes himself as a biohacker. This person has made several body modifications on himself, putting different sensors and objects in different parts of his body. One of these modifications is the insertion of magnets on his fingertips, that was made with the objective of making it easier for him to pick up metallic objects, however, that modification had a secondary effect on himself, making him able to feel the magnetic fields of other objects (like magnets) as if they were textures through his fingertips.

That new sense that the interviewed describes, is not an esoteric or paranormal feeling; magnetic fields are known by humanity since a lot of years ago, can be measured and have been used by science for many years, however, is something that is not possible for humans to feel, since humans don't have any "sensor" that allows them to feel that. But now, this person, who decided to modify his own body, has managed to give himself that new sense, and looking back at the description of human consciousness of Merker, what this means is that this person has expanded his visual aperture of the world.

But how is that possible? The neuroscientist David Eagleman, describes the human brain as a general computing machine, that by itself is not actually seeing anything, but it's connected to several sensors, that the brain use it and give sense to the receive information, if the information is coming from somewhere else that is not the biological sensor, the brain will still use it, for example, the brain of a person with a cochlear implant, will hear, even when the information is not coming directly from the biological cochlea.

Anil Seth, neuroscientist and professor at the University of Sussex, said:
"We don't just passively perceive the world, we actively generate it. The world we experience comes as much, if not more, from the inside out as from the inside in. In fact, we're all hallucinating all the time, including right now. It's just that when we agree about our hallucinations, we call that reality."

In there Seth extends what Eagleman explains, adding the concept of reality, and how that's not only an external thing, but also a creation of the individual.

Eagleman also said: "Every animal assumes that its umwelt is the entire objective reality out there"

Umwelt is a self centered, german word, to describe the surroundings of an individual. What Eagleman said with this, is that because of the biological composition of every animal, the sensor it has, every animal, is capable of perceive what they'll believe is the only reality, but at the same time, is says that there cannot be such a thing as objective reality, since this one can be different from one species to another.

Knowing that there are many animals with very different senses than the ones humans have, then the inevitable questions were: how's the umwelt of these other creatures? How do they perceive the world? What is reality for them?

Those questions were key to form the design challenge:

How might we expand the human visual aperture of reality, by borrowing non-human senses, in order to extend the human experience?

In that quest, many creatures were studied, sharks, bats, birds, insects, snakes, and many more, that have at least one sense that is different from the human ones, and in order to constrain the project, three animals were selected:

Leaf-nosed Bats: who have the ability to perceive ultrasonic waves, using what we know as echolocation, which allows them to navigate the world even when their vision is, compared to humans, very poor.

Python snakes: these ones also have a very poor vision, instead of detecting other living creatures with their vision, they do it by sensing their body temperature, detecting the infrared emissions from other bodies, and with that, detect the temperature of them and identify between threats, friends and prays.

Sea Turtles: they have the ability to sense the earth's magnetic field (geomagnetoception), with the different fluctuations of it depending on where they are, making them a natural GPS, and that's the reason why sea turtles are able to go back to the place they were born to reproduce.

These three creatures have this senses located on their faces, bats create the ultrasonic waves with their mouth and nose, and receive them with their ears; pythons have their pit organs located on top of their mouth; and sea turtles have a combination of organs and bacteria between their nose and eyes that allows them to perceive the earth's magnetic field. So with that prompt,the project Interface, took the direction of making three different masks that will give the person who's using them the ability to experiment a new sense.

During the user testing, an interesting insight appears, when it comes to playing with human senses, is not just about adding senses, because when a new sense is added, the brain just takes some on the attention that is using on all the other senses, and put it on the new sense, paying then less attention on all the senses in general, so, then the answer was not ot add a new sense, but to swap it by another one, so in the case of the echolocation and infrared sensing, were swapped with the sight, that swapping was achieved by using a frosty acrylic, that when putted on the user eyes, make impossible to actually see. And in the case of the geomagnetoception, the sense was swapped by the smelling, blocking the nostrils.

Capturing the data for the new senses was not a challenge, since those electronic sensors are quite popular, but what it was a challenge was transmitting the new sense to the body in a way that felt natural. To achieve this, it was tested with users, to transmit it with vibration, temperature and pressure, the first two were described by the users as very clear feedback, but didn't feel natural. However, with pressure (using hydraulic silicon pads), was described as a sensation that felt like it was coming from inside, being this like a heartbeat on the skin, making it feel like an actual sense that is in the body.

The echolocation mask allows the person to navigate the space, without being able to see, but feeling the distance at what other objects are.

The infrared sensing mask gives the person the capability to sense if a living creature is passing nearby, even without seeing the person, and feeling from where it is coming as well as how warm or big it is.