According to scientific research, even with all the Paris Climate Agreement proposals fully implemented by 2100, humanity is still far away from creating a sustainable life. What if we decentralize the carbon offsetting responsibilities and scale them down to the individual level? What if individuals have daily carbon caps, and everyone has to offset every gram of carbon dioxide they emit? What new carbon policies, businesses, and products would emerge in this fictional future world?

Here is the story of this possible future:

After a few decades of effort, regions and countries finally signed the Carbon Agreement and built the Carbon Union in 2040 within the UNFCCC. Its mission is to use the collective power of individuals to make up the gap between the industry carbon reduction plan and a carbon sustainable life. Those regions that signed the Carbon Agreement are enrolled in the Carbon Union, a pilot community where has carbon price to every human activity. In Carbon Union, there is a new currency upon the existing ones called carbon credits, and everyone has a daily carbon credit cap. If citizens exceed their carbon credit caps, they can make up the difference through an expansive monthly payment to the Carbon Union, or they can earn carbon credits by offsetting carbon emissions on their own. The goal is to use the collective citizen's power to make up the huge gap between the industry's carbon reduction plan and carbon sustainable life. The Carbon Union build an official website to publish the carbon data to the public, including real-time total carbon emission and carbon sequestration volume tracking within the Carbon Union based on the carbon credits data analysis.Link: https://www.thecarbonunion.org/

Inventors devote themselves to new carbon sequestration technology research and developing tools to equip people to offset their carbon emissions. CO2 Gadgets Magazine specializes in publishing personal scale carbon sequestration tools, which becomes the number 1 most popular magazine of the year. The latest issue includes products like the Diamond Fizzy Water Ring, which can absorb CO2 from the air and release it into water to make you a bottle of fizzy water; Carbon Wallets, designed as necklaces and bowties, to track the owner's carbon expenses and will tighten and constrain their breath when they run out of carbon credits; Moss Beard and Algae Ruff enable people to use photosynthesis to offset carbon emission in style. Full magazine link: https://www.personalcarboneconomy.com/carbon-gadgets-magazine

Instead of offsetting carbon emission by themselves or paying high carbon bills to the Carbon Union, people can purchase carbon credits at much lower prices from the World Carbon Bank, a nonprofit individual carbon exchange platform. It connects you to individuals and businesses worldwide, who earn extra carbon credits by offsetting carbon dioxide. The World Carbon Bank provides new job opportunities for climate refugees and turns heavy carbon emitting businesses into sustainable ones. A video made by the World Carbon Bank promotes their platform, including some carbon seller highlights. Video link: https://vimeo.com/221653826

Within the Carbon Union, carbon sustainability has become a value system rather than a purely political behavior. Citizens are prompted to embrace a new symbiotic lifestyle with algae to reduce their carbon emissions. Products like Spirulina garments become popular. By wearing Spirulina garments, people cultivate Spirulina using body temperature to offset their carbon emissions while enjoying fresh oxygen released from the garments, and then harvest Spirulina for nutrition instead of spending carbon credits to purchase other foods. In contrast, some low-income workers also maintain their lifestyle by taking on a Skin Farming side job for extra income or by selling the carbon credits they earn.

Even though these scenarios and products are fictional, they're all extrapolated from solid scientific research and current world conditions. Personal Carbon Economy builds artifacts and scenarios to bring this possible future in front of audiences with the goal of triggering conversations and reflections about our today's lives. 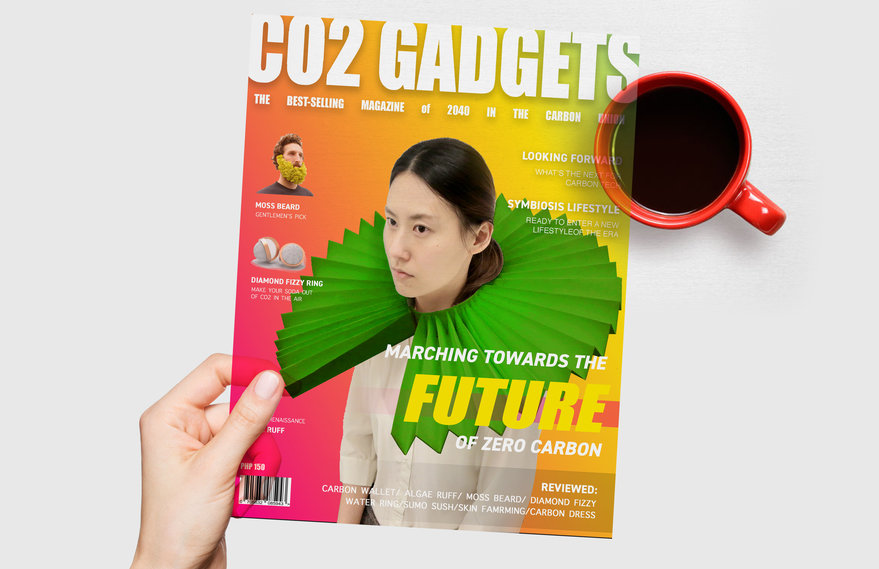 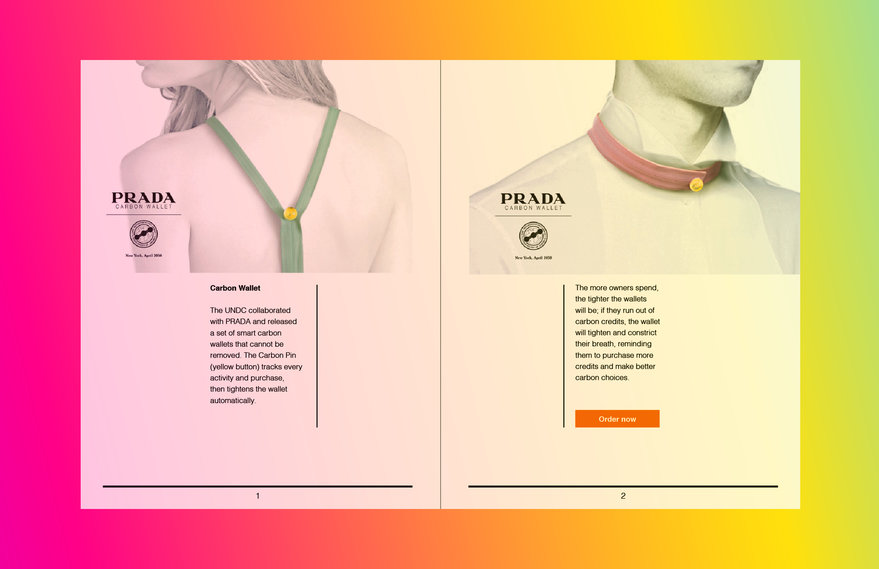 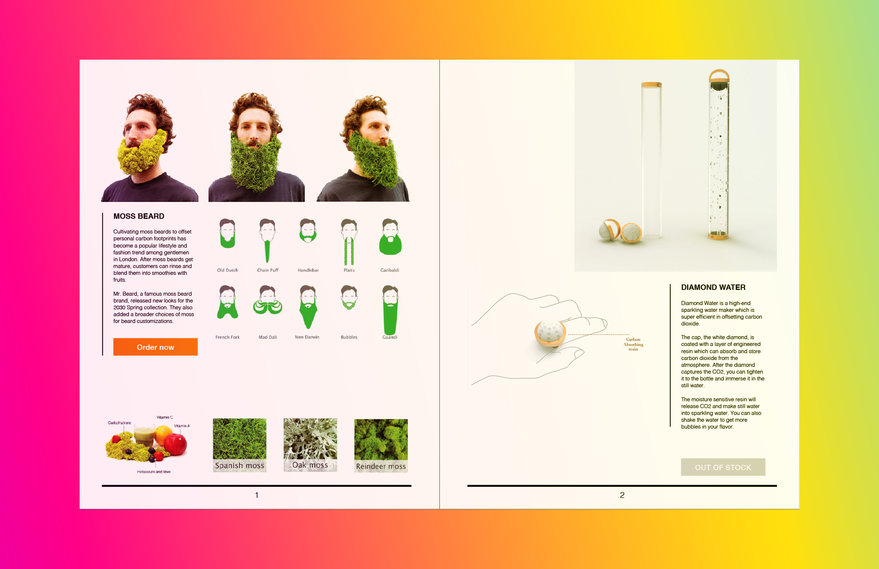 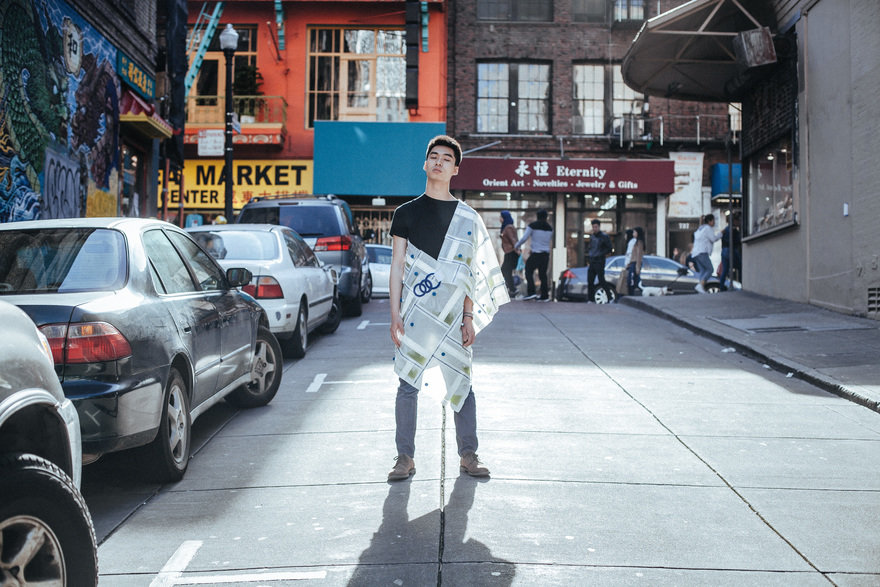 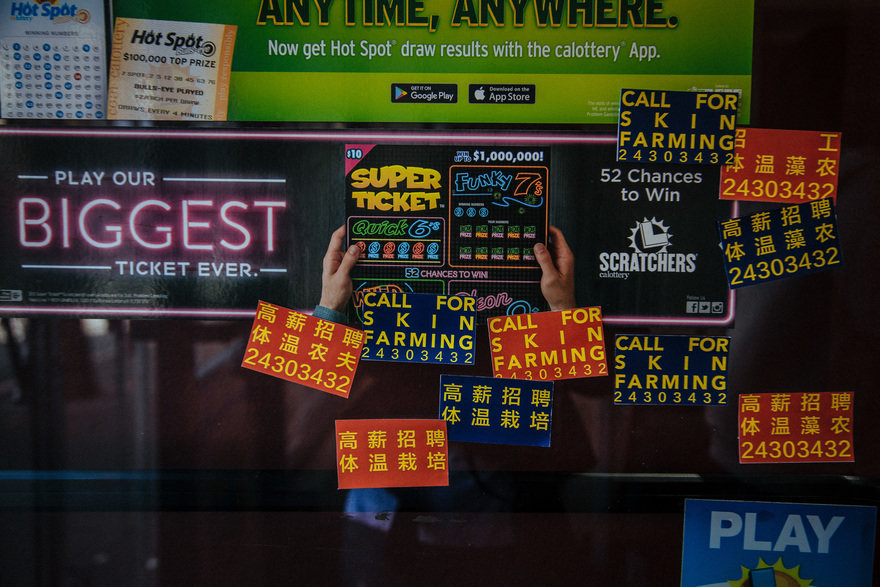 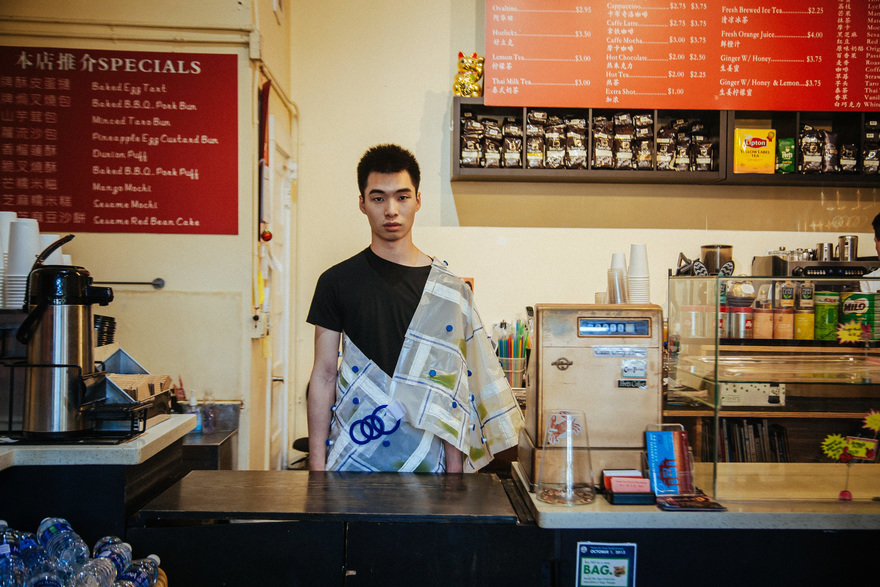 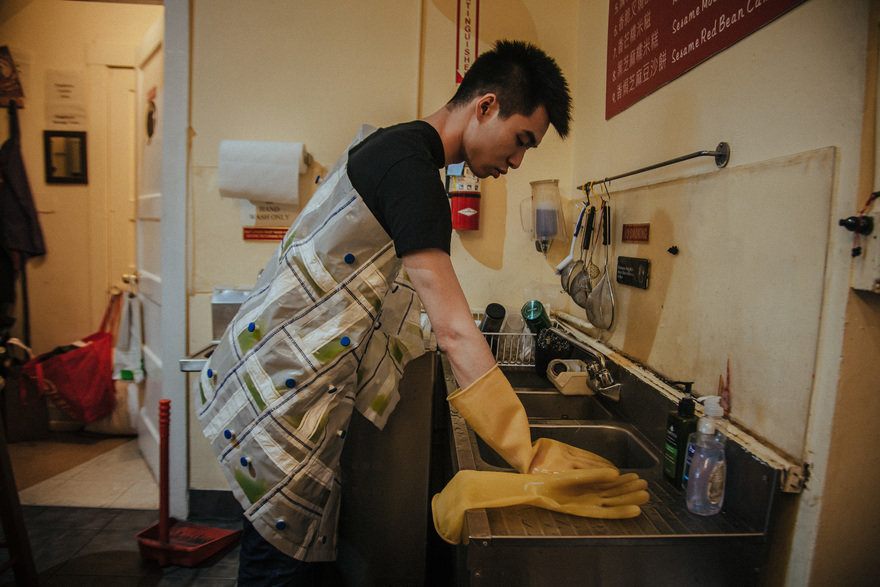 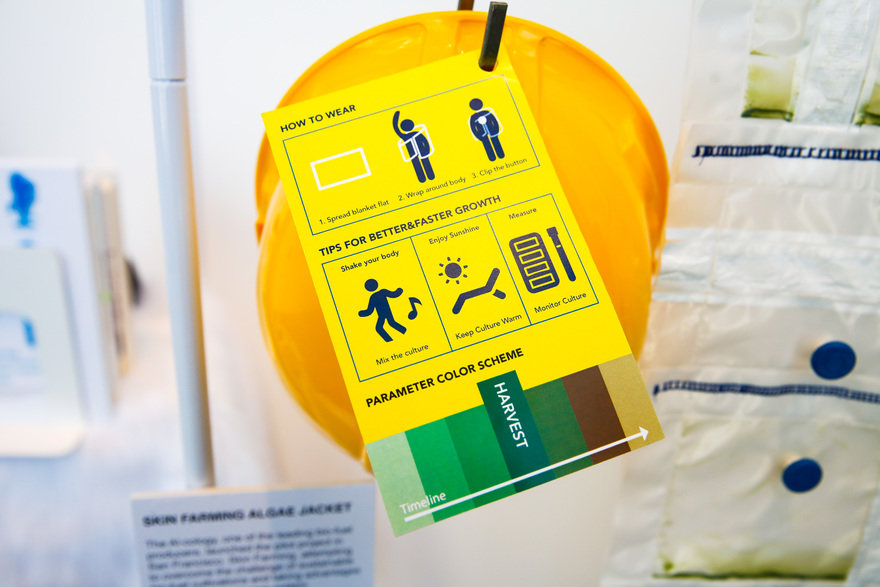 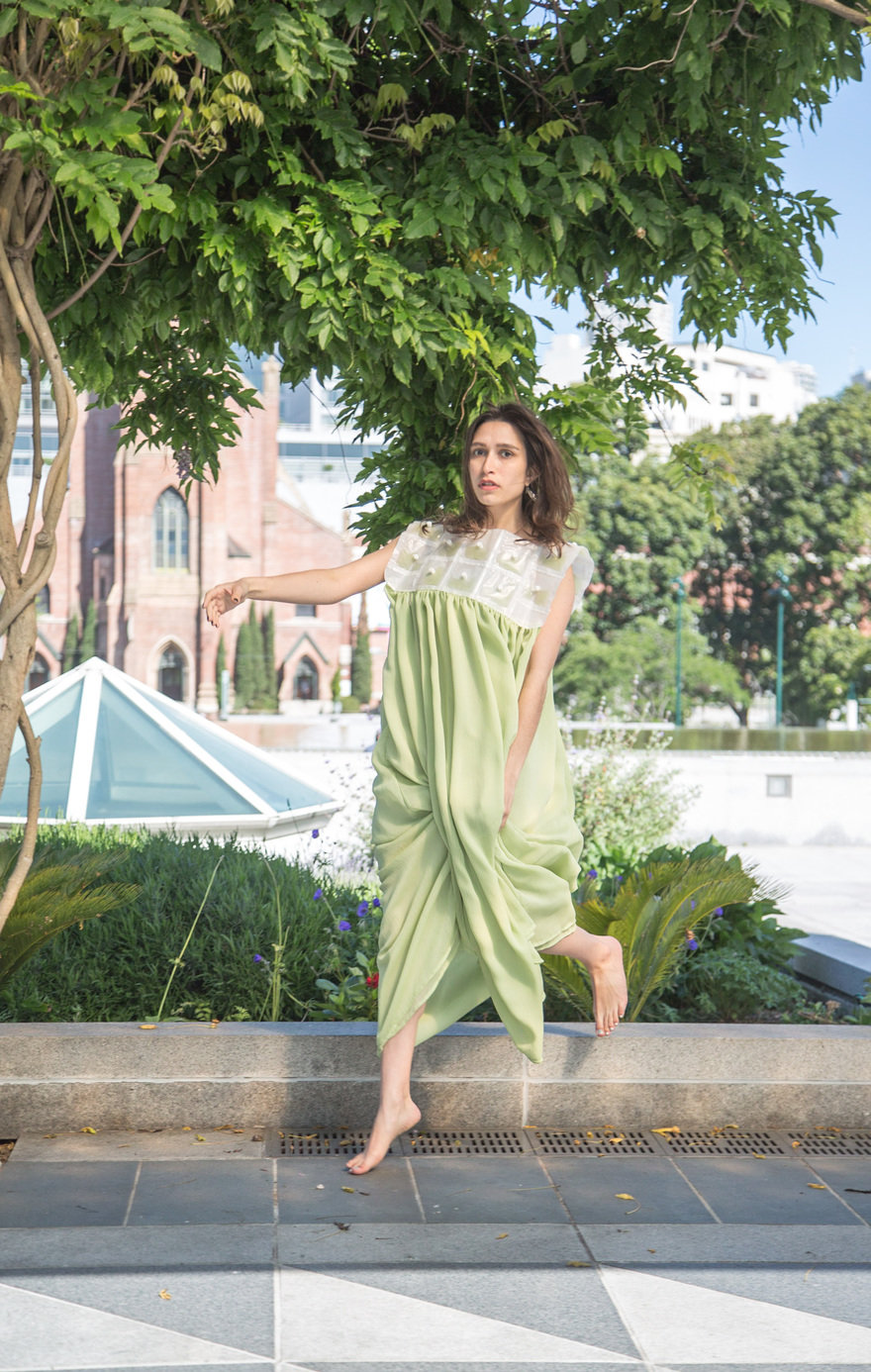 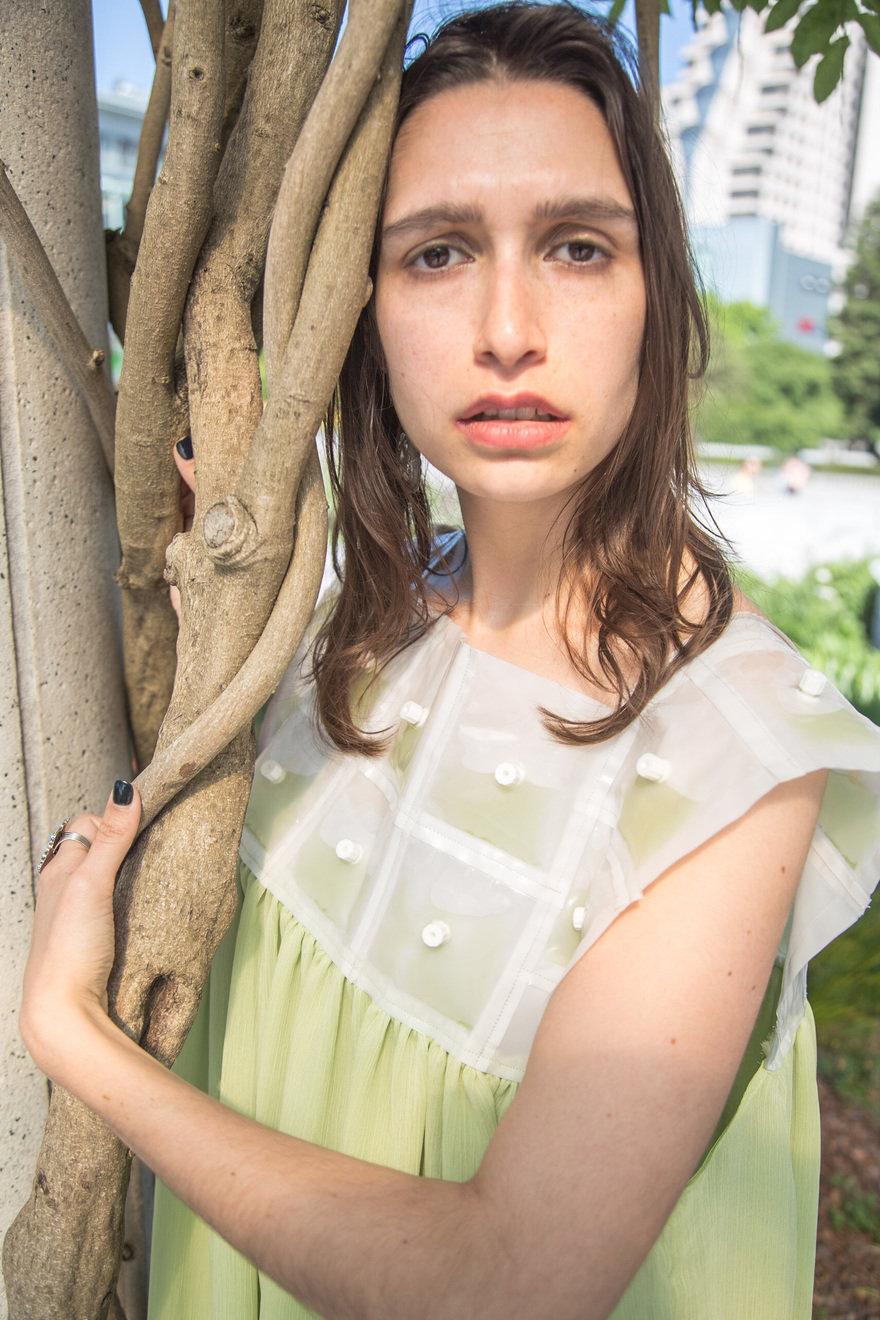 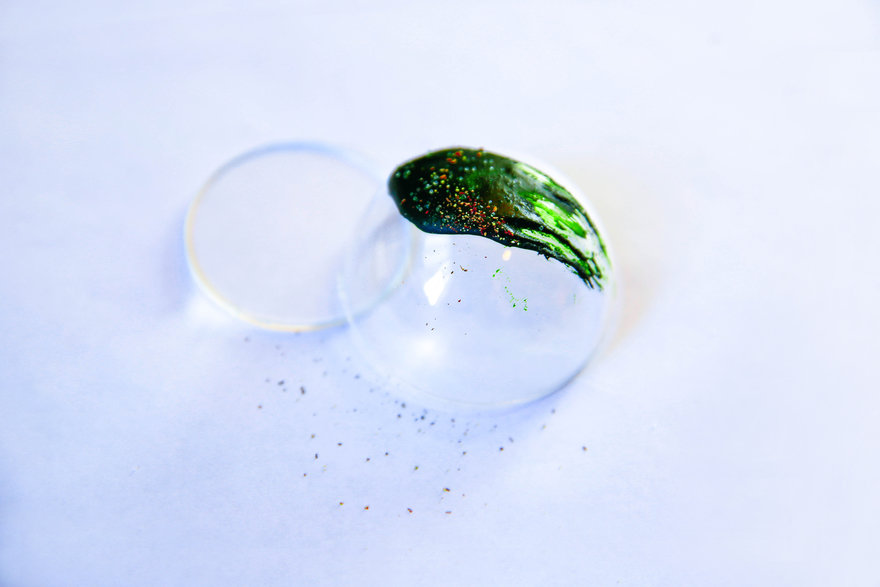 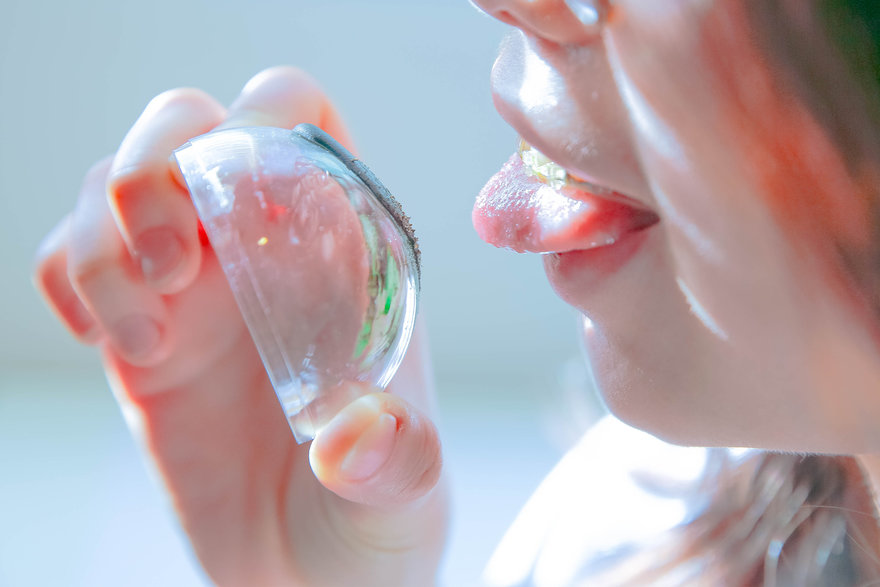 Scientific research by ClimateInteractive about the Paris Climate Agreement, an agreement within the United Nations Framework Convention on Climate Change (UNFCCC) dealing with greenhouse gases emissions mitigation, adaptation, and finance starting in the year 2020. It is a huge step for countries to propose carbon reduction goals in the Paris agreement, but even with all the proposals fully implemented, humanity is still far away from a sustainable life.

Greenhouse gases are also trash that we emit into the atmosphere. We should take responsibility for offsetting our emissions in our daily lives. What if we decentralize the carbon offsetting responsibilities to the individual level?

The gap between current carbon emissions and the Paris Climate Accord was made smaller by factories though carbon cap and trade, technological inventions, and carbon management. What if individuals can similarly reach their carbon emissions goals through personal carbon cap and trade, new technology innovations, and personal carbon management? For those challenges, the collective and bottom-up power are beyond measure.

A future system based on today's global conditions and technologie

I forecasted a fictional personal carbon economy system in the near future based on the investigations of several current economic systems. To understand carbon as a potential economy and value system, I investigated the global economy of recycling to help me identify players, elements, and social behaviors for this carbon value system and economy. I understand the current carbon trade policies, regulations, and incentives through California's industry Carbon Cap & Trade system; I utilized resources and energy sharing concepts surrounding carbon from the sharing economy. Researching those three systems adds complexity and depth to my fictional personal carbon economy.

Based on the current economic system and carbon sequestration technologies, I designed a series of scenarios within the personal carbon economy world in four perspectives: global political actions, mundane carbon consumer products, global nonprofit organizations for carbon trade, and a new symbiotic lifestyle.

Designed for familiarity and diversity

The scenarios and artifacts are crafted carefully to bring audiences to this possible carbon future by seeing how various current social groups and cultures feed into the personal carbon economy system.

All the artifacts are created for different types of users who live in the carbon economy and are based on scientific research. The solutions proposed are believable and desirable. I started by collecting the industrial carbon capture technologies and scaling them down to the personal level so that individuals can use those technologies to offset their personal carbon footprint. Then I married the technologies with fictional users from the top twenty carbon emitting countries today, and selected cities among them based on their weather, social economy level, awareness, and lifestyle. I envisioned the product using scenarios and immersed those technologies into daily life by designing objects and bringing leading-edge technologies into the center of their world. Every audience can find their future-selves or others they know and see how they will use one of these mundane products in the new personal carbon economy world.

The scenarios and artifacts are walking on the ridge of the uncanny valley (green dots showing on the right). I played with the familiarity and weirdness of the artifacts. Either the form is peculiar but the function is common sense, or the form is familiar but the function is erratic. I am trying to create layers of "A-ha" moments to make the audience feel like they know something, but then suddenly have them find an unknown surprise. Those layers create a moment, a space for the audience to explore thoughts and reflect on the scenarios and artifacts.

Objects from the future

I expressed those interactions through physical artifacts which bring the future scenarios closer to today's world. They have the power to transport the carbon economy future to my audience through presence, touch or even wear. The functional artifacts can be made into products today and have the possibility to turn my audience into users.

As they say, The future is already here, but not evenly distributed. Some dystopian futures we envisioned are someone's real live in some regions today. Anthropocene challenges need more action than awareness. It is hard to translate awareness into action but design can nudge change by preparing people mentally and physically through visuals and experiences. The scenarios I created are intended to get people mentally prepared for action. The functional artifacts are for physical preparation for taking actions. This is a small step toward turning awareness into action and will become a catalyst for change.

The functional artifacts can be made into products today and have the possibility to turn my audience into users. I'd love to call those functional future products: actionable matters, which invite viewers to participate and experience the future world and its value system. They are not only meant to critique the irresponsible present mentality, but also to bring possible utopian future solutions closer to today by preparing people for change, mentally and physically.

More ambiguously, if those products can inspire others to make similar products or even put them into the market now or in near future, there will be a group of people purchasing them and using them to offset carbon emissions. When repeating carbon offset behavior becomes a ritual for subcultures; then add scale and time, it will eventually cultivate a mainstream culture that marches towards a carbon sustainable life.