Merge is inspired by the variety of cycling needs in New York City, and New York is a tough proving ground for an urban bike. The streets are packed with cars and pedestrians. Cyclists here must navigate tight spaces, both on the road (cars double parked in the bike lanes) and at home (a fifth floor walk up to a 500 square foot 1 bedroom). Our bike needed to be efficient, compact, and maneuverable. In some ways these attributes were at odds with the need for utility and cargo, but juxtaposing these opposing criteria led us to an exciting and integrated solution. Merge is a compact and nimble ride, offering its rider confidence when navigating tight spaces. At the same time there is necessary utility. Merge's rear rack snaps open at a moment's notice, but can also retract when not in use. Merge's other thoughtfully designed features include cargo, lighting, security, and a USB charging port. They are seamlessly integrated and right where you need them, yet unobtrusive when not in use. Merge offers an elegant and integrated solution to the needs of a variety of urban cyclists. 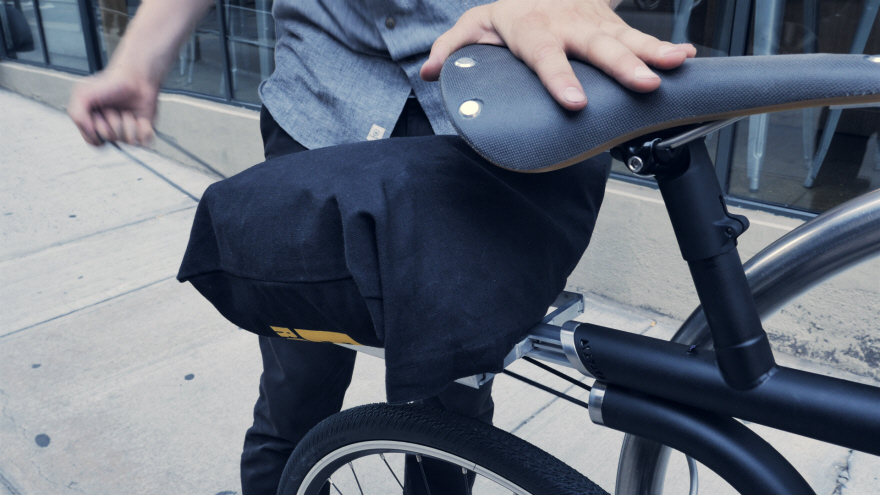 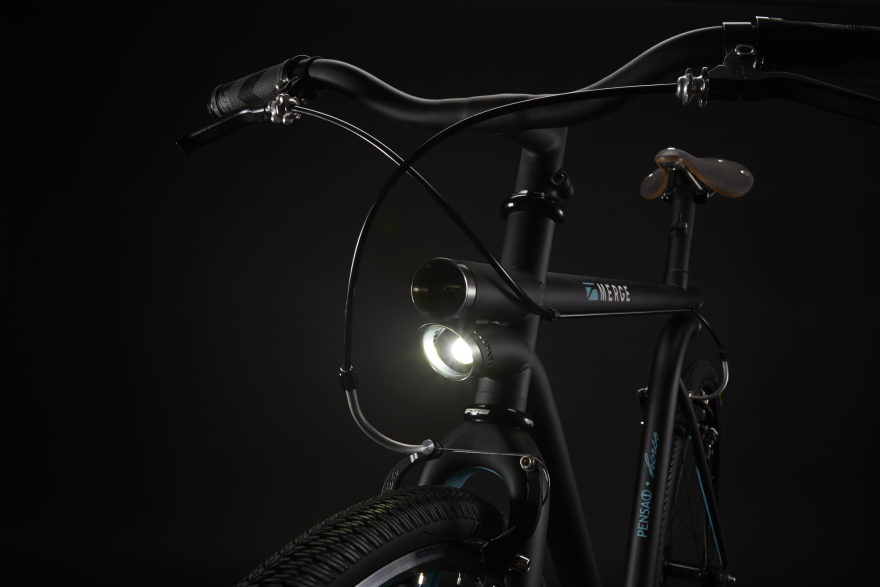 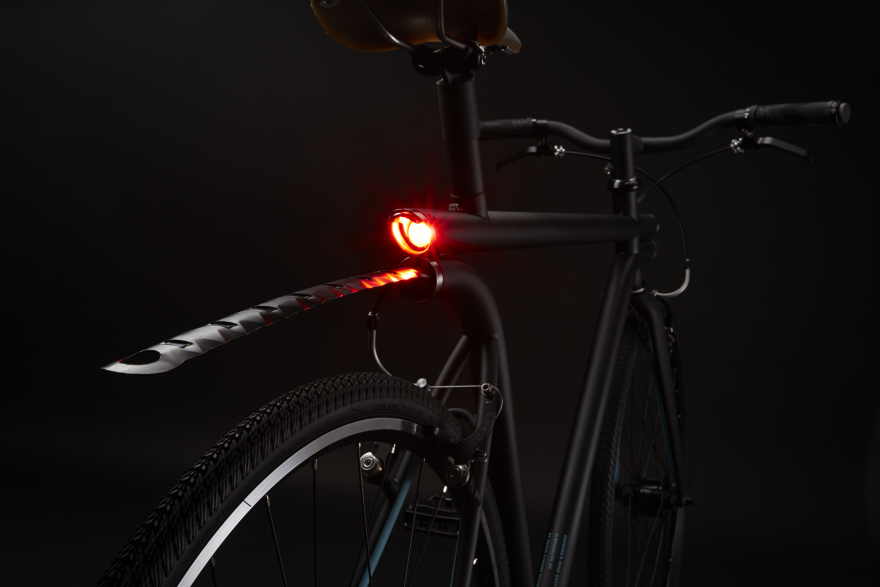 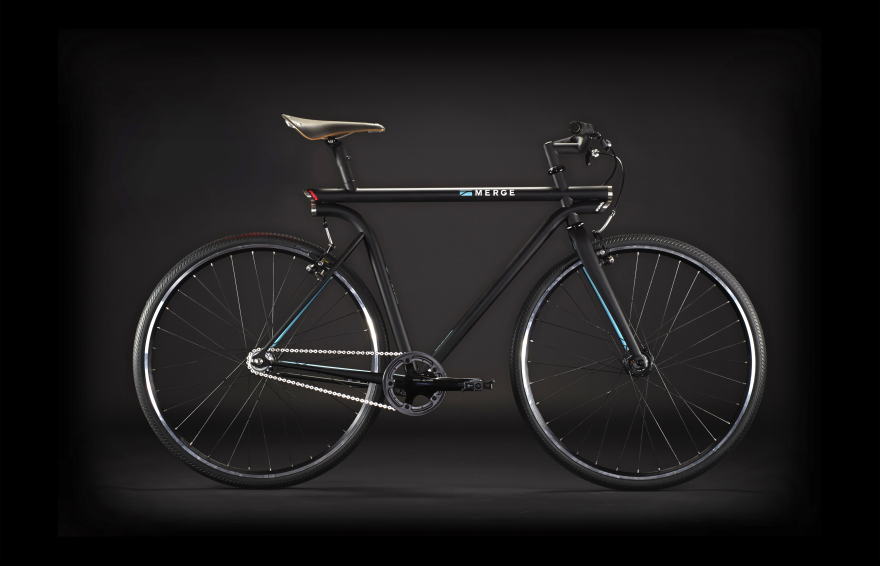 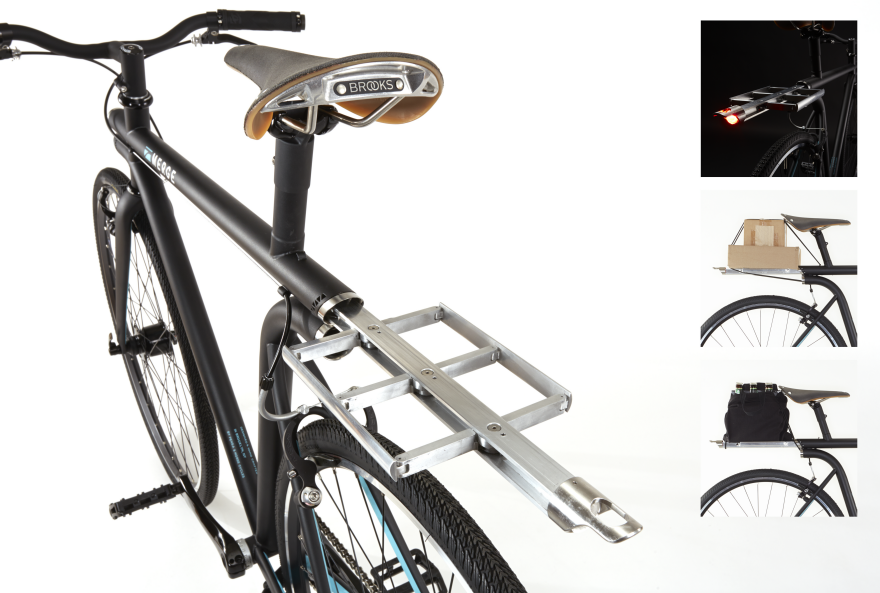 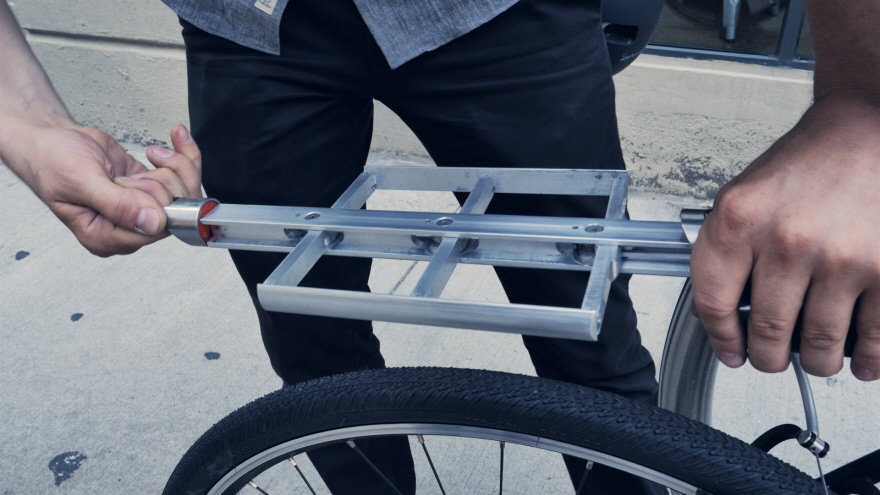 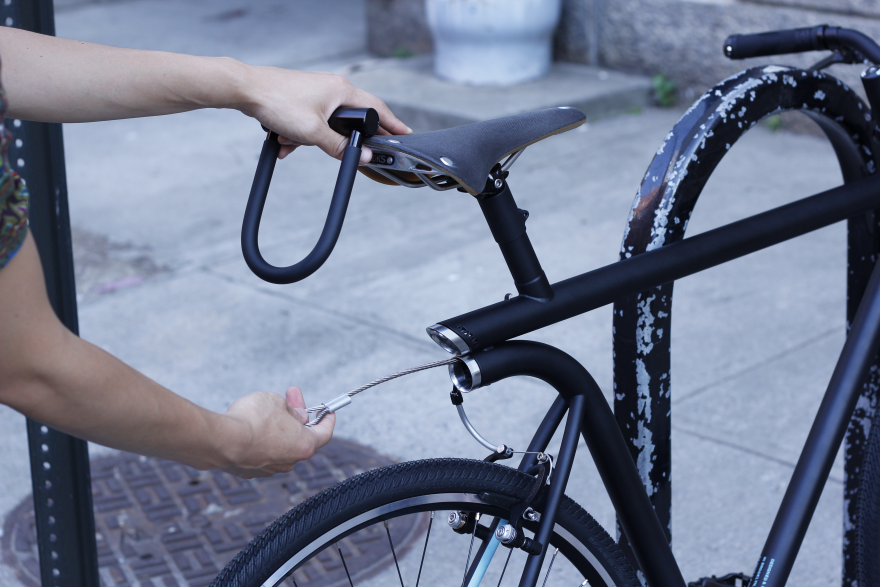 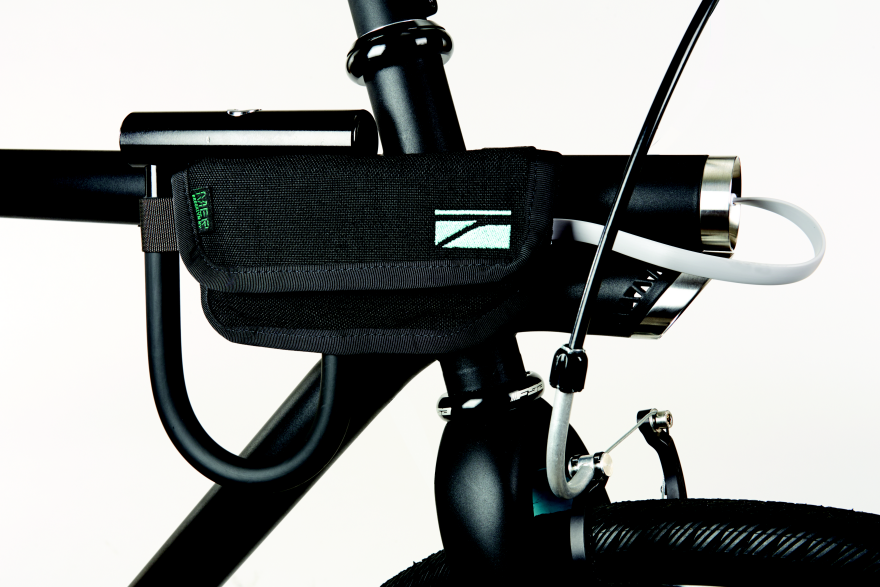 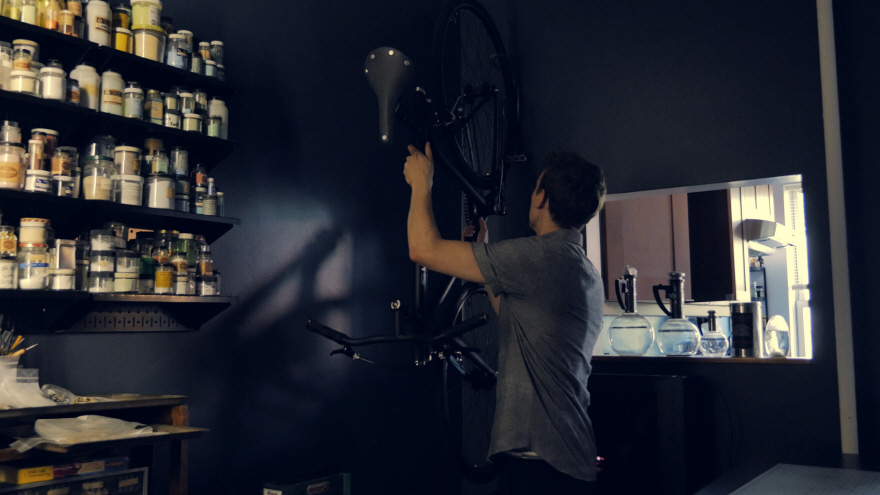 compact and easy to hang 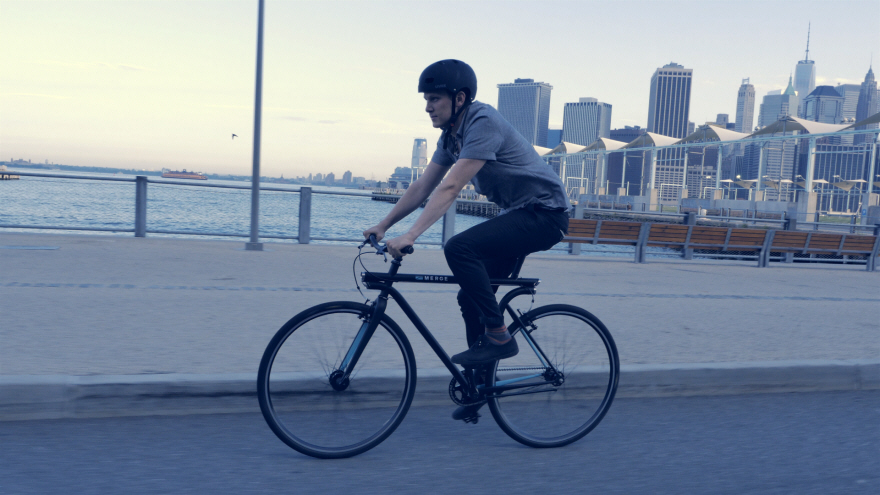 designed to be ridden hard 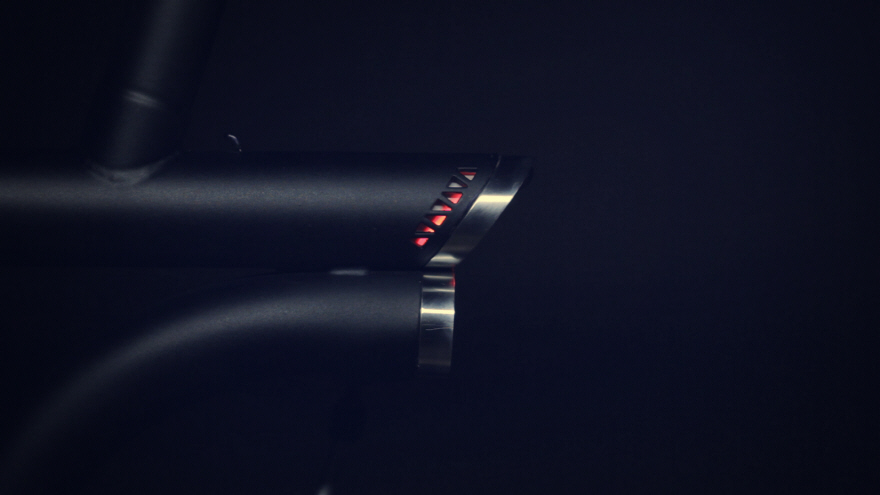 light bleeds through the laser cut pattern in the frame 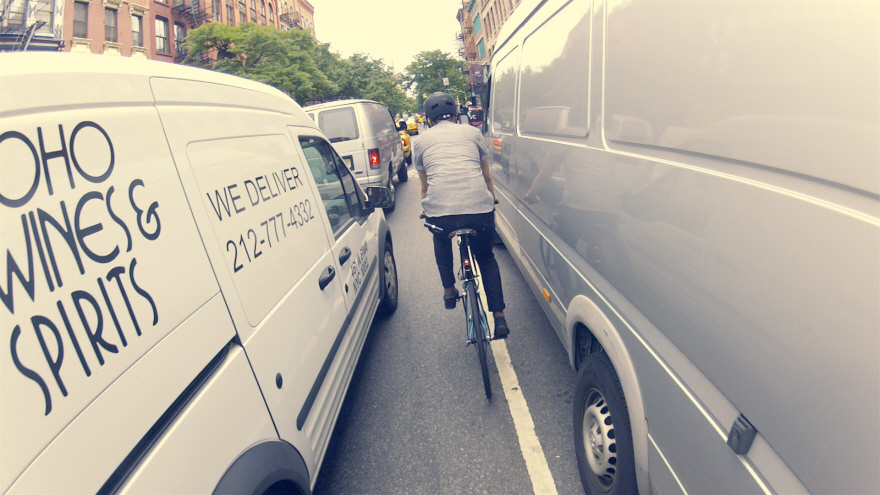 As a foundation for the project, we knew we had to design a bike to be ridden, and ridden hard. This was some of the focus of our initial brainstorming: Let's build a bike to ride. We had New York City as our backdrop and inspiration. Biking in New York City is its own beast. People move fast here. People have somewhere to be and are singularly focused on getting there. Although this may seem obvious, it was important for us to identify that the ideal urban utility bike would need to be an extension of this rider and his or her needs.

As always, we began our design and invention process by asking a lot of questions. We needed to be informed, understand the specific nuances of the world in which our solution would live, and build genuine passion for the subject matter. A majority of our team commutes by bike and enthusiasm for the project was overflowing. From the start, we had a solid core group of users to study. We started by asking: Who is the urban cycling commuter? What are his or her needs from a bicycle on a daily basis? Do those needs change from day to day? Or from week to week? What items are transported on a daily basis? What type of bike and what features and components are critical for the terrain?

We took notice that there is no shortage of bicycle types and riding styles. Through our riding research, inspiration gathering and immersion into the world of the urban commuting cyclist, we identified specific insights which helped us hone our concepts. We focused on extreme conditions to inspire solutions. People think differently about space in New York City and other densely populated urban environments. Conditions such as tight living quarters (think 500 square feet shared with a roommate), no parking, and crowded streets and sidewalks all have an influence on the bikes we use. Words like "efficiency" and "compact" influenced our bike concepts. At the same time, we knew our solution must help a cyclist carry their stuff and that amount of stuff can vary greatly. A large segment of the New York population doesn't own a car, and many of those who do are not using them on a daily basis. Juxtaposing seemingly opposite criteria led to exciting and unexpected solutions.

Our solution had to be integrated. We needed functionality ready to snap into action at a moment's notice, but also able to disappear in an instant so you could return to your minimal and maneuverable ride.

We started with the frame. Our goal was not to come in and throw away the 100+ year history of development that has led to the modern bicycle, but rather to build upon it. The Merge frame is made from bent, cut, and welded tubes, and its geometry is at its core a diamond frame. Then by placing large radius bends at the tops of the seat and down tubes and then passing those tubes, along with the top tube, through their normal termination points, we were able to create four functional access points to the interior of the frame.

Within the front two ports we integrated lighting and a USB charging port, both powered by an integrated Shimano Alfine Dynamo hub. The front and rear lights can also be seen from the side of the bike as they glow through an intricate laser-cut pattern in the frame.

In the rear two ports, we also have lighting, but that lighting is integrated into an aluminum, spring-loaded, fully retractable rack. This rack can pull out and snap open in an instant and, along with the integrated bungee loop from the lower port, is ready to carry a variety of loads. When you're done with it, it disappears into the frame with the touch of a button.

We have also incorporated a pull-out structural fender with a spring steel spine and a spare wheel-locking cable in the lower port. The one detachable accessory is a custom, water-resistant smartphone and U-lock holster which hugs securely to the front of the frame, near the USB charger.

In listing all these features of the design, in the end we are most proud of the overall simplicity with which they are presented. They are right there at the rider's fingertips when needed, but never in the way when squeezing through the tight spaces, or carrying the bike up the narrow stairs of a fifth-floor walk-up. Merge transforms at a moment's notice, and allows you to truly ride your way.

It's really well thought-out...Some of the innovation that we saw in there has not been done before. So that’s leading to a really cool new category of bike use.

What really caught my attention- everything just being so well integrated into a stylish, sporty, type of bike...It’s a no compromise solution. It looks great, and it has all this utility at the same time.