Over 50% of patients take prescriptions incorrectly or not at all. 22 months after filling a prescription for a chronic condition, over 40% have stopped taking it altogether. The World Health Organization has declared improving medication adherence more valuable than developing new drugs. Former Surgeon General C. Everett Koop is blunt, "Drugs don't work in people who don't take them." So, why don't people take their medications? Well, when surveyed, most people answer, "I forget," so most mobile health solutions attempt to tackle the adherence puzzle through reminder apps. But 80% abandon those apps after the first use and almost all of the remaining 20% within two weeks. We were commissioned by ExpressScripts/Medco to conduct a major, nation-wide qualitative research study with patients across the spectrum, shadowing them on doctor visits and conducting rich, in-home contextual inquiry. We discovered the real reason people stop taking their meds is that they don't understand how their meds work, what it's doing in their body or if its even working.

Our strategy anchored around empowering patients with a genuine understanding of how medications work, and the natural ways that your body responds to those medications, from side effects to positive indicators of its effectiveness. Medvisor demonstrates in plain language, metaphors and animations how the 156 most prescribed medications operate in your body. Our mobile health app flips side effects and tracking to the patients' perspective to simplify side effect management and inspiring motivation through success. With a back-end portal for case managers to improve coaching and communication, over 300 providers use components developed to date, including Kaiser Permanente and Tenet Healthcare. 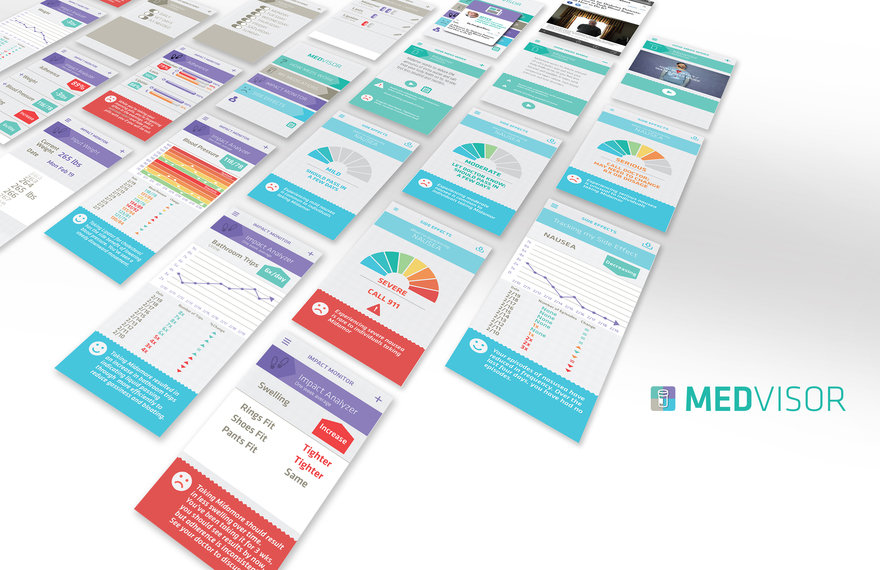 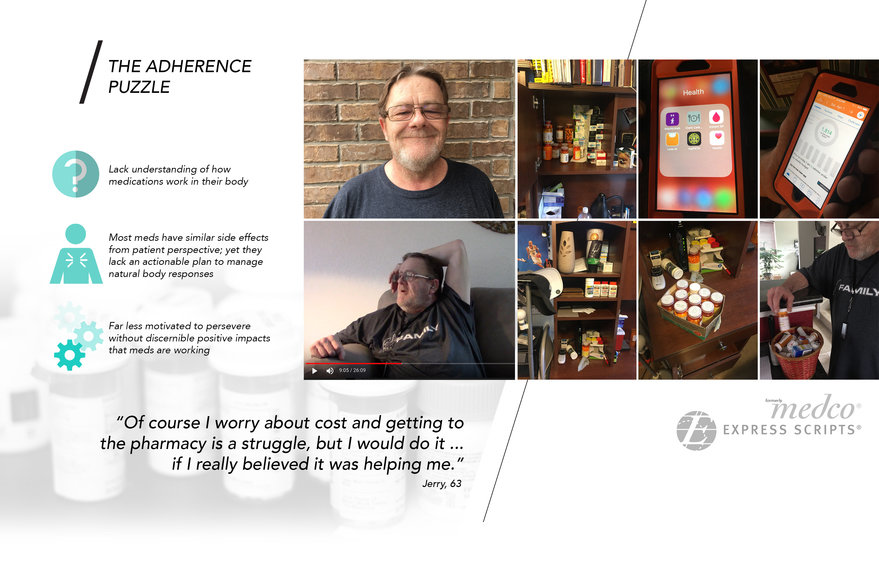 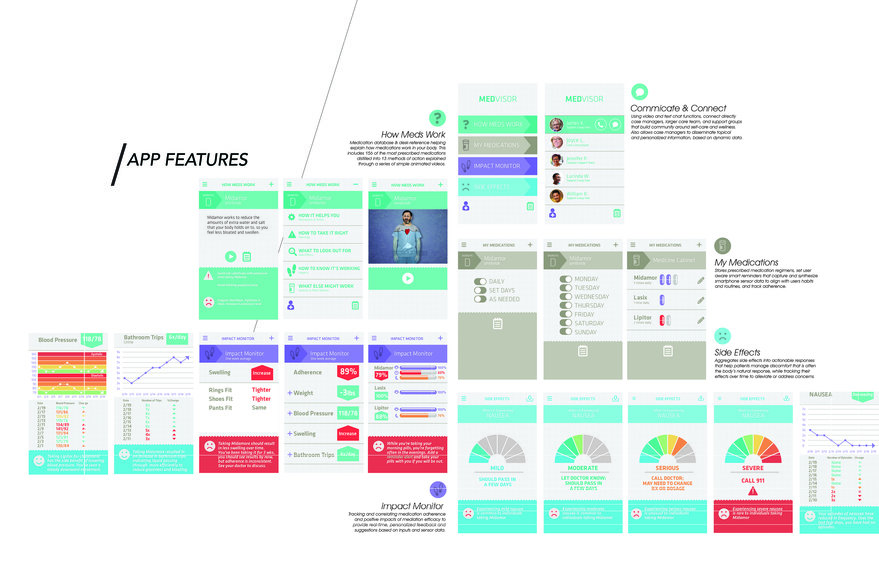 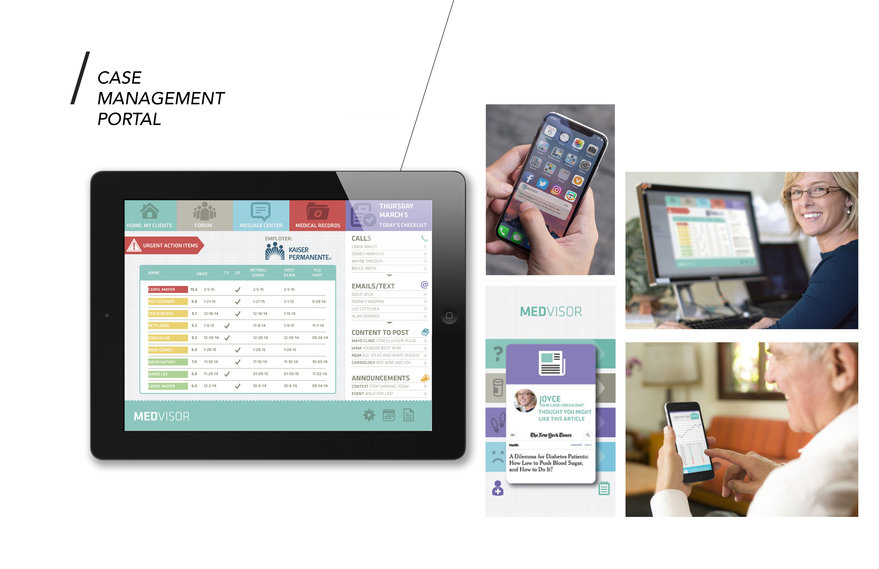 Why don't people take their medications? Over 50% of medications for chronic conditions are taken incorrectly or not at all. 22 months after filling a prescription for a chronic condition, over 40% have stopped taking it altogether. Even in life-threatening situations, adherence is shockingly poor: A third of kidney transplant patients reject anti-rejection medications and 41% of heart attack patients don't take their blood pressure medications. Non-adherence starts before people even get home. Up to 30% of the 3.8 billion prescriptions written each year are never filled. It's not a new problem, but certainly one of the most intractable ones. The WHO laments, "Hippocrates' exhortation to the physician to 'not only do what is right, but also make the patient…cooperate' has consistently failed for more than 2000 years." Former Surgeon General C. Everett Koop is blunt, "Drugs don't work in people who don't take them." The second major challenge is that medical industry and the solutions they generate are on the wrong track. When surveyed, people overwhelmingly respond, "I forgot" along with other logistical obstacles. Accordingly most adherence solutions focus on reminder functions. And while mobile health apps have proliferated, 80% are abandoned after one use and most of the remaining quit two weeks later. High tech approaches to adherence are doomed to fail without better insight into why people don't take their medications. The final challenge is supporting self-care for behavior change. While most approaches increase professional services that are labor-intensive and costly, the radical simplification of science in ways that encourage and inspire self-care has remained elusive.

Medco (now ExpressScripts) commissioned a 2-year, nationwide ethnography for not only logistical but also psychological barriers to adherence. We uncovered 3 missing pieces that ultimately differentiated our approach to the adherence puzzle: Science, Side Effects and Success. Addressing these three insights formed the heart of the Medvisor solution.

Our clinical visits shadowing patients highlighted how doctors spent just seconds introducing prescriptions, usually only describing the regimen. If asked how a medicine works, they answer only, "It's for your [heart, etc.]." Without explanations, patients concoct their own pseudo-scientific understanding that quickly withers at the first sign of difficulty. We discovered that the real reason people stop taking their meds is that they don't understand what it's doing in their body. And without understanding how a specific medication works, they are far less motivated to persevere through the inevitable challenges that follow whether cost, side effects or yes, forgetfulness. Science is the key to adherence, at least a basic understanding of that science. But simplifying science is easier said than done. And a review of existing drug information from patient inserts to common consumer websites shows that there are few attempts to do so. For our design, our team worked closely with linguists and scientists alike to decipher and translate formal FDA drug information of the top 156 most commonly prescribed medications into simple, yet sound science. We then developed a series of videos with simple language, lighthearted metaphors and playful animation on how those 156 drugs classified into 13 mechanisms of action, actually work inside the body, from diuretics and beta blockers to statins and blood sugar pills. These videos and the associated drug reference descriptions developed for this project form the core of this project.

Second, the industry's approach to side effects exacerbates the adherence challenge. They list all possible side effects for each drug, in 6pt type or in dry ad recitations. Patients revealed 3 flaws in this approach: First, comparing lists shows all medications can have almost all the same side effects. Second, you can't tell, when it first occurs, if a symptom is in fact a side effect. Third, you don't need an ID; you need to act. Patients lack the effective means to manage side effects when they inevitably occur. We developed a new approach that analyzes the symptom and severity in order to provide an immediate actionable response, whether to wait it out, tell your doctor or call 911. We then help patients to track those symptoms which can empower their understanding of their body's own natural responses.


Finally, patients saw trackers as negative, records of failures. The absence of crisis is not motivating. Patients crave affirmation that medications are working. Our clinical team identified discernable real-world metrics. Are you on a diuretic water pill? Track how loose your rings feel. Take a Beta Blocker? Experience less episodes of rapid heart rates. We provide real world measures that your medications are working like they're supposed to.

Medvisor is an adherence solution delivered through a patient mobile health app in combination with a back-end case management portal. From start to finish, the Medvisor approach delights in the unfolding of understanding and the empowering of self-care. For people who feel confused and overwhelmed with managing their health and have given up on trying to comprehend what is happening to them, the true delight of our experience is in that moment of understanding, the A-HA. Divided into four sections, Medvisor (1) educates patients on how their meds work (2) tracks medication adherence and provides reminders (3) tracks and manages side effects and lastly (4) identifies and tracks positive impacts and signs that your meds are working. The design of the graphical user interface, from color palette to typeface to layout provides a simple, approachable and intuitive interface, particularly for those less tech-savvy or with accessibility impairments.

A back-end infrastructure supports case management and enhance the ability of front-line case managers to monitor, respond and communicate with patients in real time. Our web portal centralizes patient health records, dynamically tracks adherence and impacts, prioritizes urgent cases to respond to concerns before its too late and provides a direct channel of communication, from one-on-one chats to personalized information sharing on topical or emergent issues.

In bringing Medvisor to the market, we bypassed traditional consumer channels that are flooded with health apps. For the greatest impact, we instead targeted the entities that bear the greatest financial risk of a user's health outcome: Health plans with fixed amounts to spend on each patient and home health agencies who pay penalties if patients are readmitted to the hospital. Our app benefits our client in measurable financial savings.

Most health plans do not even try to measure improved adherence. They merely pay for labor intensive coaching reminders and hope. But a beta version was validated with a multi-employer/provider network in the state of Nevada and the peer-reviewed results reported in the Journal of Ambulatory Care Management, showed significantly improve patient adherence with satisfaction of both patients and case managers in the area of patient dialogue, motivation and ownership directly linked to our solution. The Government Employees Health Plan published savings of 52% reduction in the need for health care services after using the same beta version. Medvisor has also become a marketing tool for home care. When providers see outcomes, they refer patients to clients using the system. One subscriber noted, "You can't do home care in Florida without [Medvisor]. Hospitals expect it." Medvisor system components are currently in use with over 300 providers nationwide including Kaiser Permanente and Tenet Health.

As Medvisor is rolled out to more insurers, the potential benefit to society to enormous. The New England Journal of Medicine implicated poor medication compliance in over 125,000 deaths annually. Non-adherence contributes up to $289 billion to US healthcare costs, a staggering 10% of total costs. While we often focus on R&D and the hope of new treatments, the World Health Organization (WHO) notes that "increasing the effectiveness of adherence interventions may have a far greater impact on the health of the population than any improvement in specific medical treatments." In an already overtaxed health system, improvements in adherence offer enormous impact.

Better adherence also impacts sustainability, with untold medications being wasted from meds never picked up to those never taken. In the absence of accessible science, pseudo-science flourishes, such as the anti-vaccination movement.