Rafts for Phytoremediation of Surface Water

Rafts for Phytoremediation of Surface Waters was my thesis project for the Master of Science in Industrial Design at the University of Houston. Through ten months of extensive study, careful research, and rigorous conceptualization, this project emerged as a potential solution for the clean-up of contaminated surface waters.

Phytoremediation is the use of living, green plants for the in-situ removal, containment, or degradation of contaminants in soil and water. Taking cues from constructed wetlands, which use phytoremediation to clean up wastewater discharged from industry and municipalities, this project utilizes plants to remediate contaminated surface waters prior to entering the drinking water system. Hundreds of scientific reports and pilot studies over the last fifty years have proven many plant species are capable of survival while exposed to significant concentrations of chemical and radiological contaminants. At the same time, these plants work to reduce contaminant levels, often down to undetectable levels. As water systems around the globe increasingly begin to turn to contaminated surface water sources in order to meet their water demands, this method of treatment is especially significant, as these systems are already underfunded and overburdened with the task of providing consistently safe and clean drinking water to their constituents using traditional infrastructure.

Surface water is widely recognized as the most contaminated water resource on our planet, as it is subject to fouling from innumerable sources. For this project, I narrowed my scope to target a single contaminant, atrazine, which is the second most commonly used agricultural herbicide in the world. Atrazine is a serious threat to our water supply, as it is designed to persist in the natural environment for years after application and is highly susceptible to travelling outside of its intended application area via runoff. Atrazine has also been linked to a number of serious health effects, including organ congestion and damage, degeneration of the muscles and retina, cancer, and chromosomal and reproductive defects.

In response to this problem, I designed a raft system to support a colony of plants that float in surface water bodies in order to remove contaminants through their roots. Unlike the systems currently employed in constructed wetlands, this project was designed with an emphasis on usability and manufacturing. Through a multi-week conceptualization period and two-part user study, preliminary data was collected to determine the ease of use and affordances of an initial functional prototype. Analysis of this data revealed many insights, and established a research foundation on which a unique connection and anchoring unit could later be developed. Consultation with faculty members specializing in materials and manufacturing and a local fabrication business also provided insight into material selection and execution of the computer-aided design to optimize future production.

As a result, the product described within this entry is a feasible solution to the pervasive issue of water contamination. While atrazine was the primary target in this instance, this project is designed to support plant-based treatments for a variety of contaminants. As such, this solution is suitable for implementation in water systems around the world. 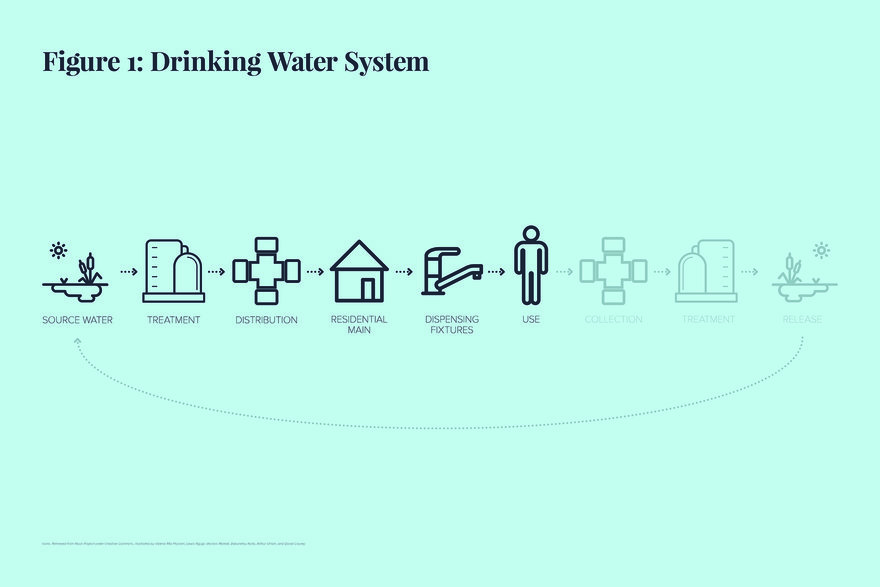 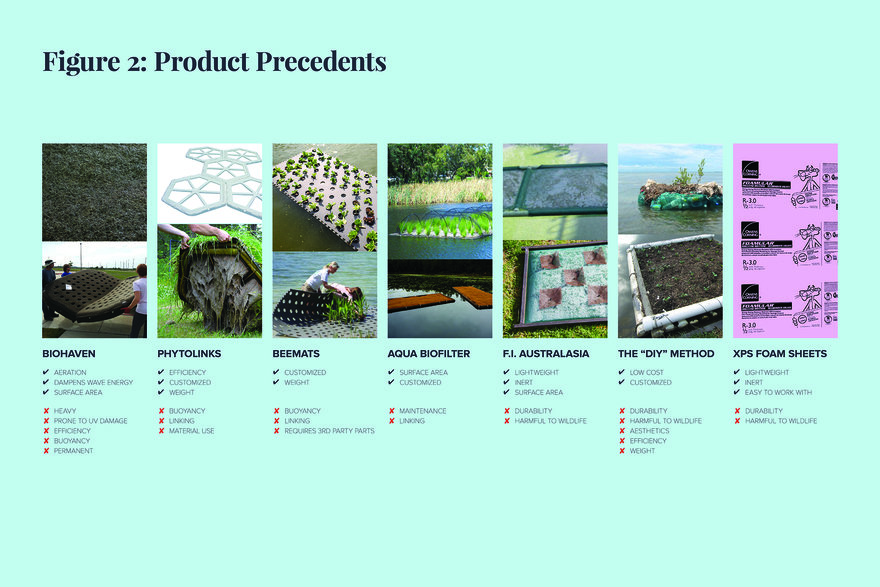 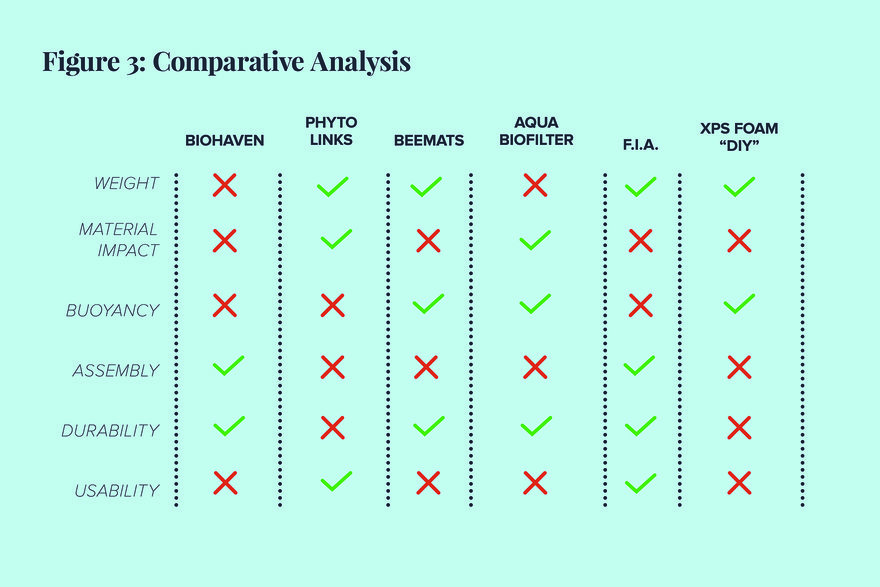 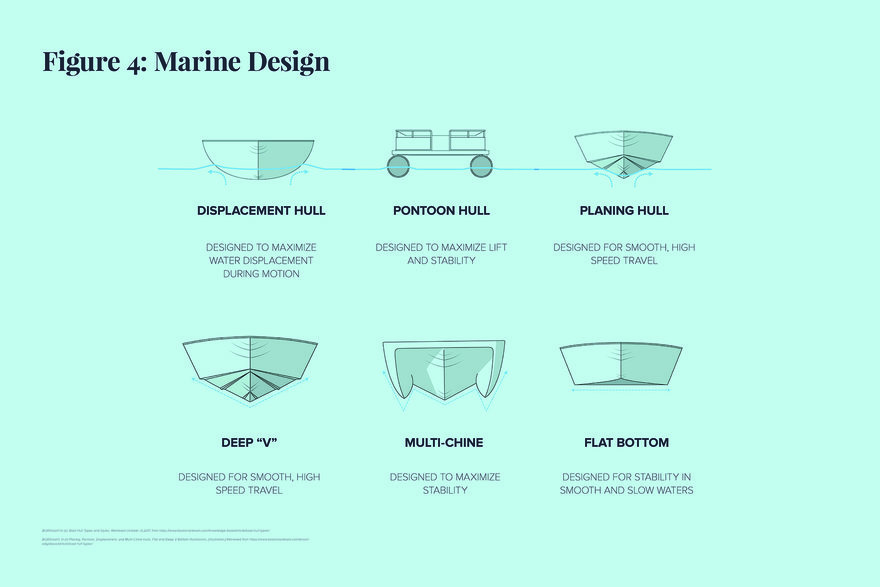 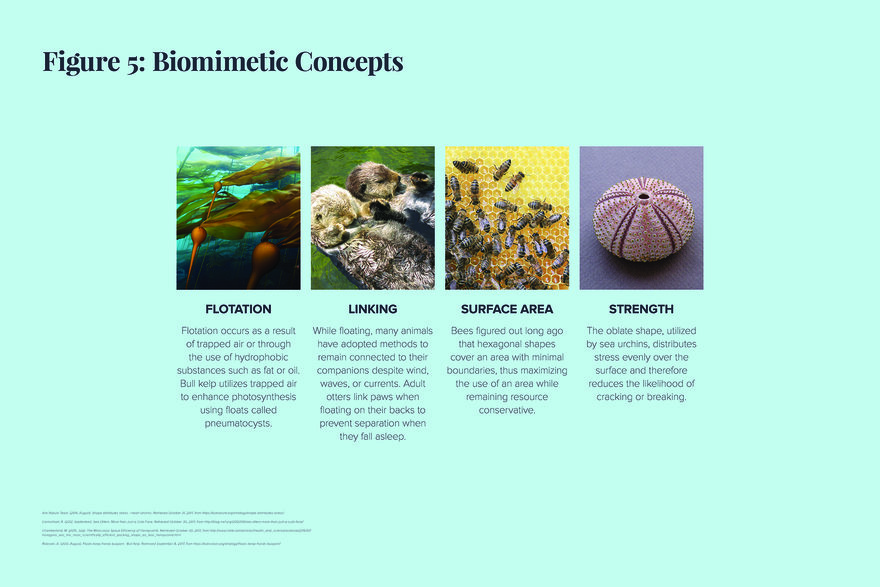 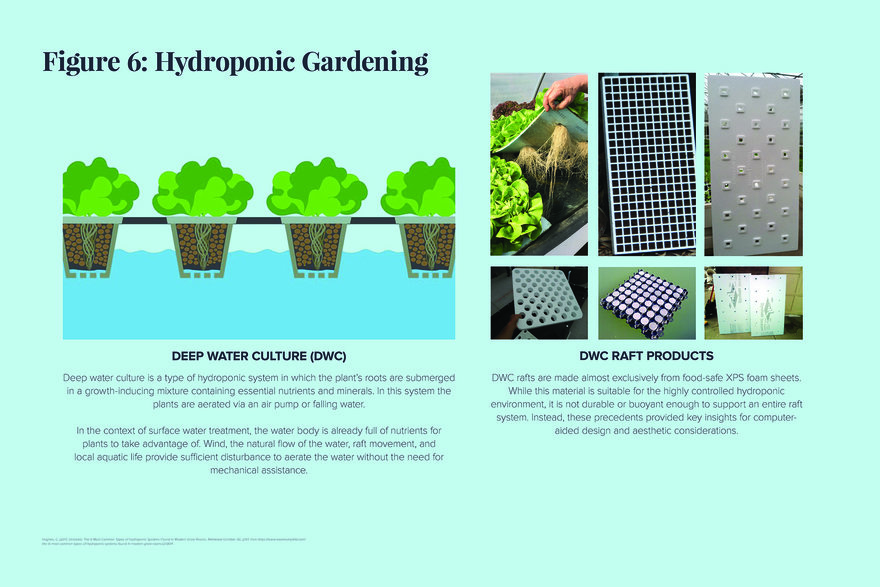 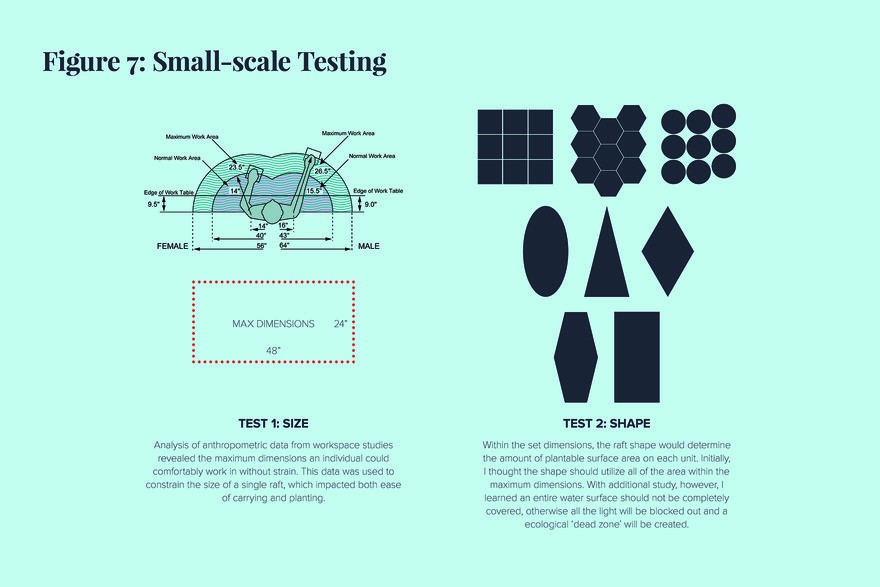 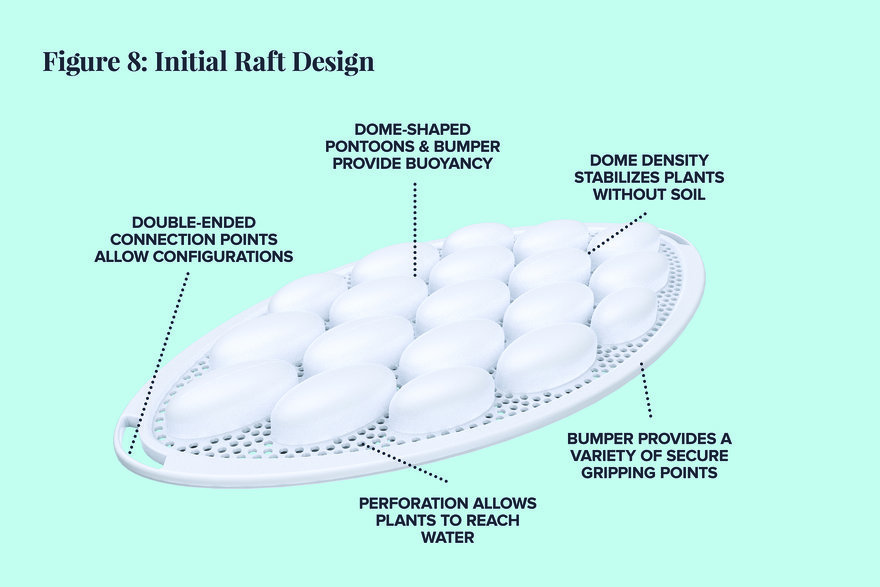 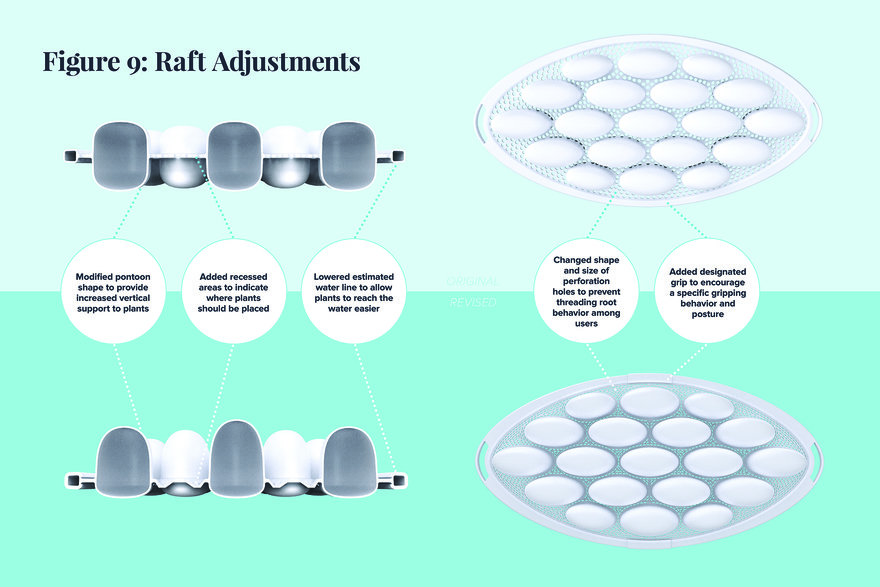 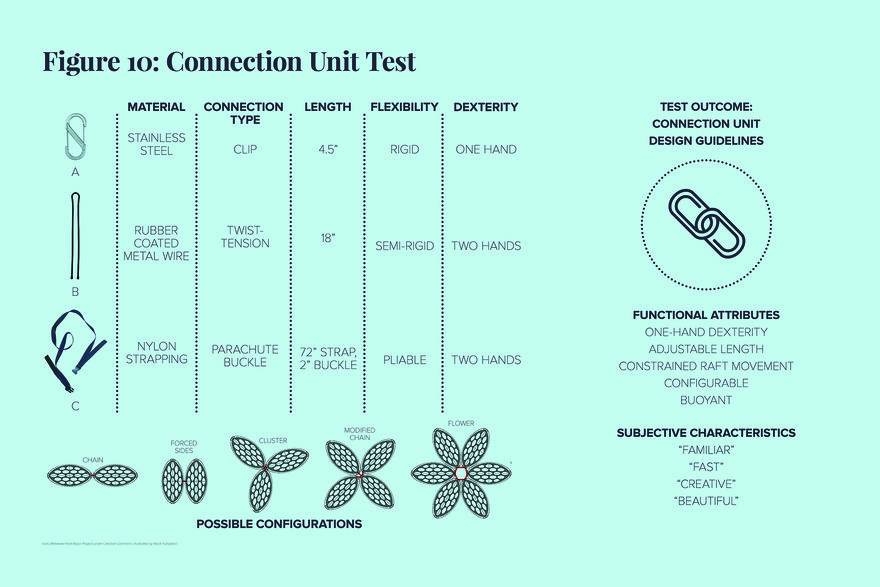 In my approach to this project, I had a very powerful and personal motivation to pursue the subject of water contamination. In 2013, my father lost his fight with Stage 4 non-Hodgkins Lymphoma, which began its attack on his body several years prior as the direct result of exposure to contaminated drinking water during his time at Camp Lejeune military base in North Carolina. His battle was terrible to witness, but it opened my eyes to the profound impact contaminated water has on public health. More recently, the water crises around the country, such as Flint, MI, made headlines and revealed the scope of the problem to be much bigger than I had previously thought. This expanded my point of view to include the entire drinking water system as a singular body with many broken parts. As such, I began my thesis in response to the question; How might human-centered design contribute to the improvement of drinking water quality?

I began researching with a systems level approach to drinking water system structures, from a global, national, state, and local/municipal perspective, as illustrated in Figure 1. At its core, all water systems are founded on the same risk-cost model, which dictates that only contaminants that pose a significant threat to a large portion of the population will be addressed with treatment, up to a certain cost level. This is why in the United States, the Environmental Protection Agency only regulates roughly 100 contaminants in drinking water, while it is known that several thousand may be present at any given time.

To better understand how water distribution networks are organized, I conducted an in-depth study of the main water system in Houston, TX through interviews with a city employee, examination of the water system treatment plan using state databases, and identification of source water intakes using Google Maps. This portion of the study revealed many problems with distribution infrastructure that contribute to the overall contamination issue, but are inaccessible due to exorbitant costs and extensive, multi-level regulations that constrict solution development.

Finally, to determine what options were available to consumers to clean their own water, I conducted a review of existing treatment products, participated in several at-home water tests, and surveyed the water-use behaviors of my social networks. From this exploration, I determined that the consumer market for water treatment products is heavily saturated and only impacts individuals who can afford to install and maintain a system.

As a result of this period of discovery, I elected to narrow my scope to the realm of source water treatment. With this project, I sought to develop a solution that was capable of having a greater impact on public health without inflicting exorbitant expenses on existing water treatment systems. In order to accomplish this, I assembled a team of advisors that would provide outside perspectives from civil and human factors engineering, materials science, and manufacturing. Advisors in these fields would serve to ensure my understanding of the information gleaned from a plethora of scientific articles was correct, and that the concepts I created in response were not fantastical in nature. These members included; George Chow, my committee chair and the computer-aided design professor for the UH industrial design program; Dr. Debora Rodrigues, a civil engineering professor specializing in heavy metal contamination in water; Dr. Gordon Vos, a human factors engineer from NASA; Adam Wells, the materials and manufacturing professor for the UH ID program; Barry Johnson, co-owner and operator of the plastic fabrication facility Thermo-Mold; and several of my student peers who worked professionally as chemical engineers in the past.

The initial design of this project took form in response to analysis of product precedents (Figure 2), exploration of marine design (Figure 4), biomimetic concepts (Figure 5), hydroponic gardening (Figure 6), and small-scale testing of design factors including size and shape (Figure 7). Existing raft solutions were compared against each other in terms of weight, material impact, buoyancy, assembly, durability, and usability in order to establish a baseline for analysis (Figure 3). While many precedents tackled one or two of these issues, no individual solution successfully addressed every single one.

Additionally, existing product precedents were used to create distinctive need profiles for both the intended raft user and the customer. The raft system is designed to target surface water bodies near drinking water intakes, but might also be used to clean up impaired water bodies on private property. As such, the future user of the raft system is most likely to be a city employee, contracted worker, or an unskilled volunteer of any age. These individuals are most concerned with the product attributes that impact their ability use the unit, such as weight, ease of grip, complexity of instructions, and ease of maintenance. In other instances where floating raft systems were deployed, customers prioritized solutions that were capable of meeting their treatment needs, scalable to fit their surface water bodies, and cost-effective.

As shown in Figure 8, the raft is an oblong shape, with a perforated surface punctuated with multiple bulbous air voids. This shape combines the functional attributes of flat bottom, multi-chine, and pontoon style boat hulls to provide stability and maneuverability to the raft without limiting buoyancy. Additionally, biomimetic precedents for structure and strength revealed the oblate air void shape, utilized by sea urchins, distributes stress evenly over the surface and therefore reduces the likelihood of cracking or breaking. Finally, each of these design decisions were also made with careful consideration of human factors. The overall raft size was limited to 2' x 4' in order to be manageable by a single person, and has an empty weight of roughly 10 lbs. The air void configuration and bumper profile work together to provide a myriad of comfortable gripping options for individuals of all sizes, while the hull shape provides a stable, slightly elevated planting surface that slides easily into the water.

Feasibility testing for plant efficacy on floating rafts is well documented with a variety of pilot studies. Instead of testing how this project would support plant growth, I chose to test how human interaction with the product could be improved. Thirty user testing sessions were conducted at a small pond on the UH campus, during which participants were observed while completing the tasks required to transport, assemble, and deploy raft units. Each task was assessed quantitatively using the NASA Task Load Index, but by far the most valuable data collected during testing was my own observational data and audio recordings. After extensive analysis of the data, several adjustments were made to strengthen the affordances of the raft to reduce strain and capitalize on the intuition of the user. (Figure 9)

Additionally, data was collected to inform the future development of a connection and anchoring unit. As few marine precedents exist for linking and anchoring a system of rafts on water, I developed a test using three different connectors to identify the necessary attributes for a future design. This test was assessed using a morphological survey and the Borg Rating of Perceived Exertion Scale, along with observational data and verbal feedback from each participant. The result of this portion of the study was the development of a set of design guidelines for a unit that facilitates the connection of a cluster of four rafts and provides a secure anchoring point either to the shore or floor of the water body. (Figure 10)

As mentioned previously, the raft itself is designed to accommodate a variety of plant species while maximizing its usable surface area in terms of buoyancy and planting density. With the assistance of the connection unit, a system of rafts can be deployed to treat water bodies of all shapes and sizes. To keep production costs low, most of the system's components are created via rotational molding using UV resistant HDPE. To create both the voids and perforated portions of the raft simultaneously, I utilized kiss-off ribbing and a secondary milling process. This also minimizes waste and creates a strong, uniform wall thickness to increase the longevity of the unit.

This solution has significant potential when deployed. In terms of drinking water, a plant-based treatment system would reduce the load on traditional purification processes without the need for costly infrastructure changes if implemented near source water intakes. Reduction of contaminants to any degree would positively impact public health, and has the potential to improve conditions in the natural environment. Outside of drinking water treatment, passive contaminant removal can be used to restore impaired water bodies in the public and private sectors, while providing habitat restoration for native aquatic species. Finally, this thesis serves to provide insight into the further development and manufacturing of biomimetic solutions for large-scale implementation. By integrating user-centric testing procedures into the product development phase, treatments like Rafts for Phytoremediation of Surface Waters are transformed from simply being effective remedies to desirable solutions.