iCalendar is a conceptual calendar that we speculate would be launched in the year 2065 by Apple, in the future where our life expectancy can be easily predicted, through methods such as DNA testing and facial recognition systems. As a result, we would be able to see a change in people's behaviour and particularly, their perception of time.
In this future calendar, time might seem like it is being sped up, almost to a point where it might even seem emotionally taxing. However, it is intriguing to speculate what it might take for an individual to make that decisive switch from the normal calendar to the new system that we have coined - 'Life Mode'. 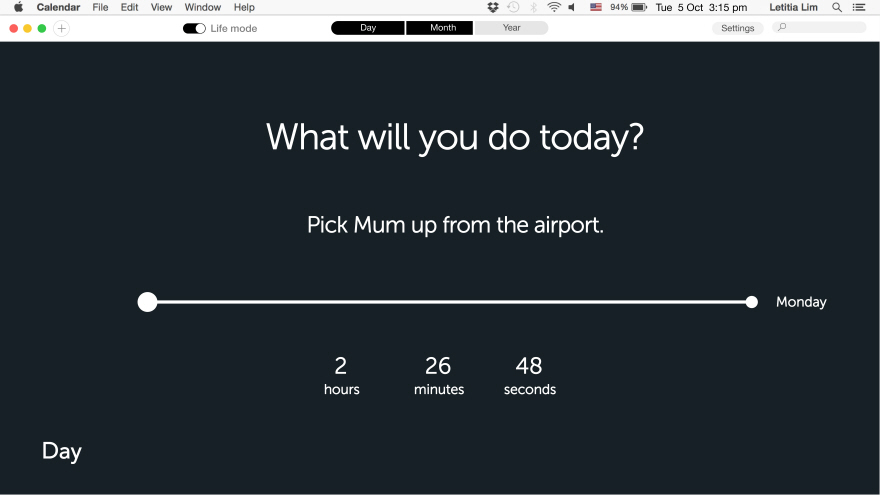 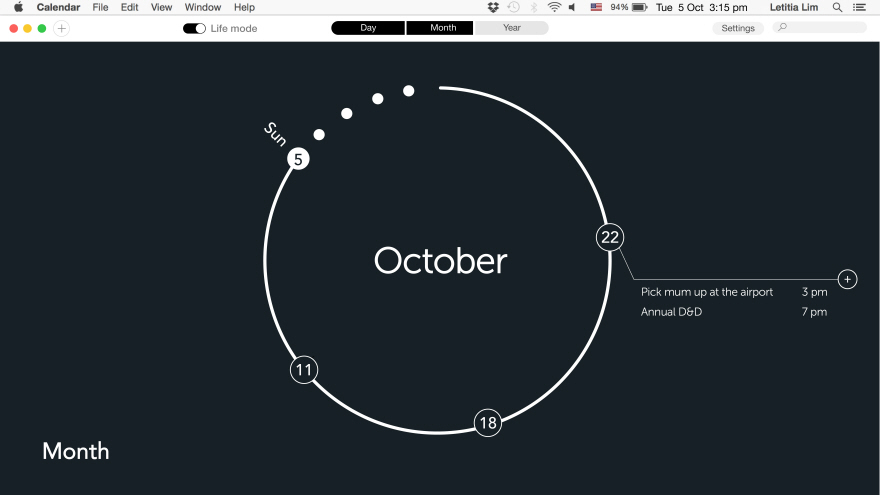 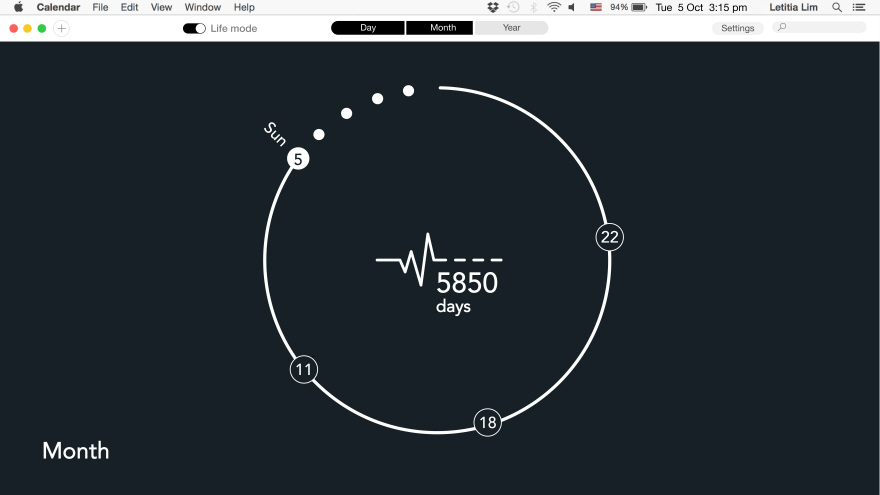 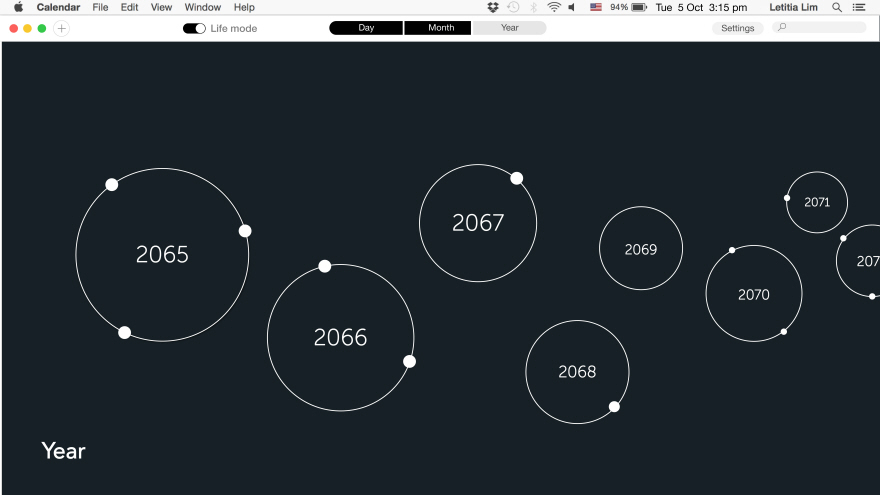 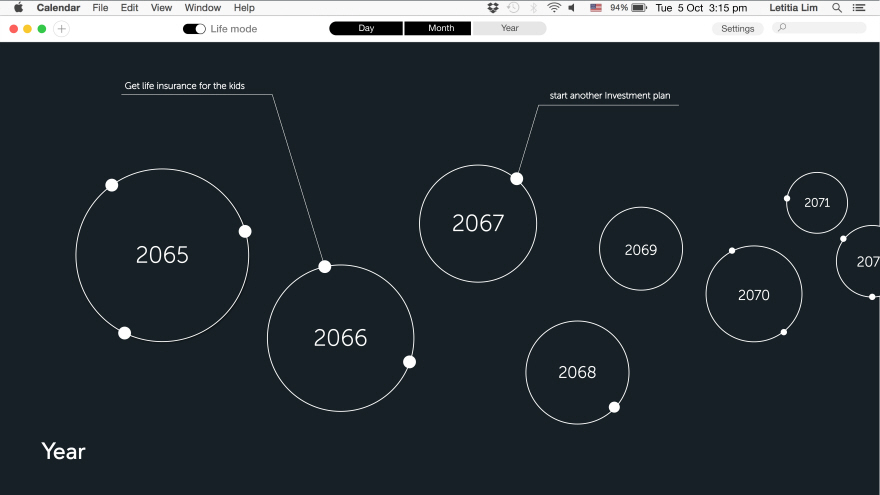 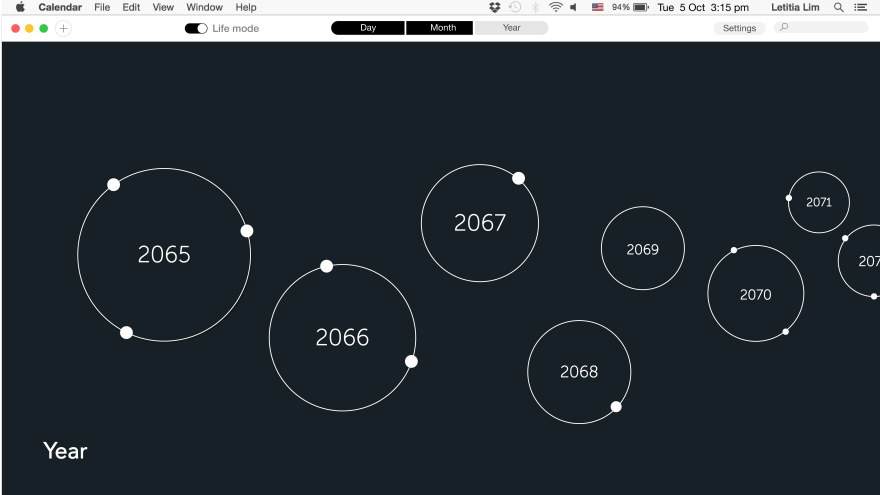 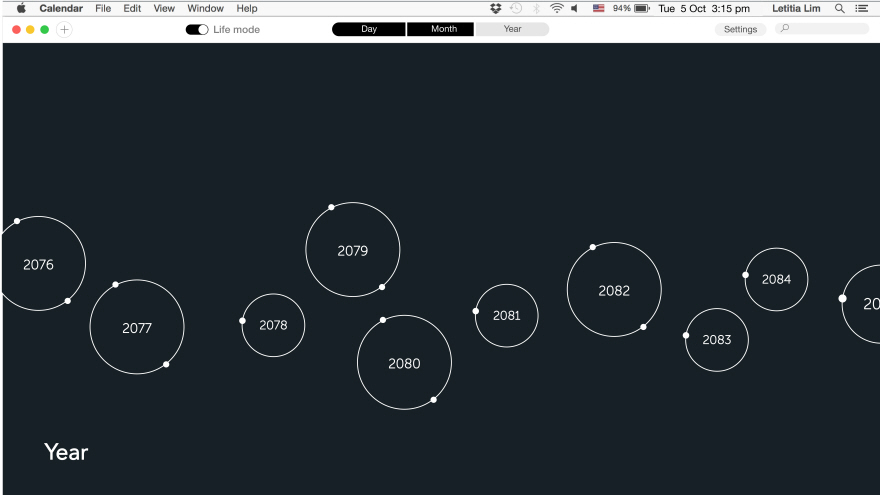 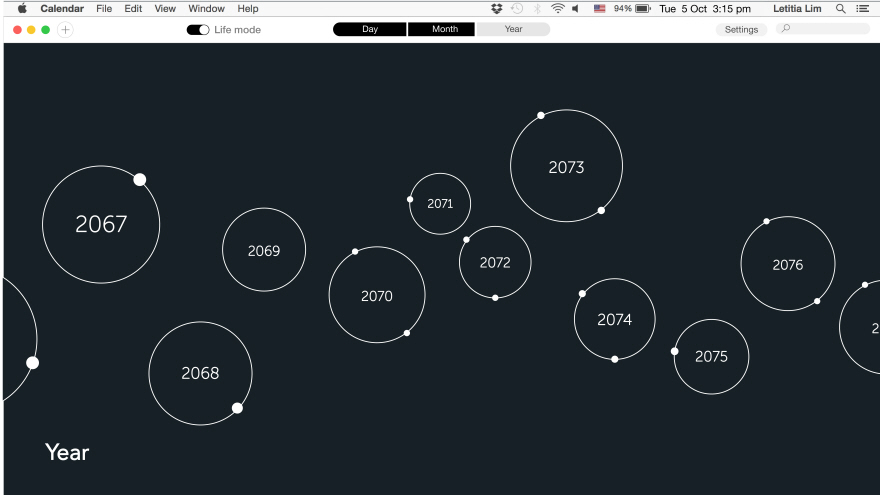 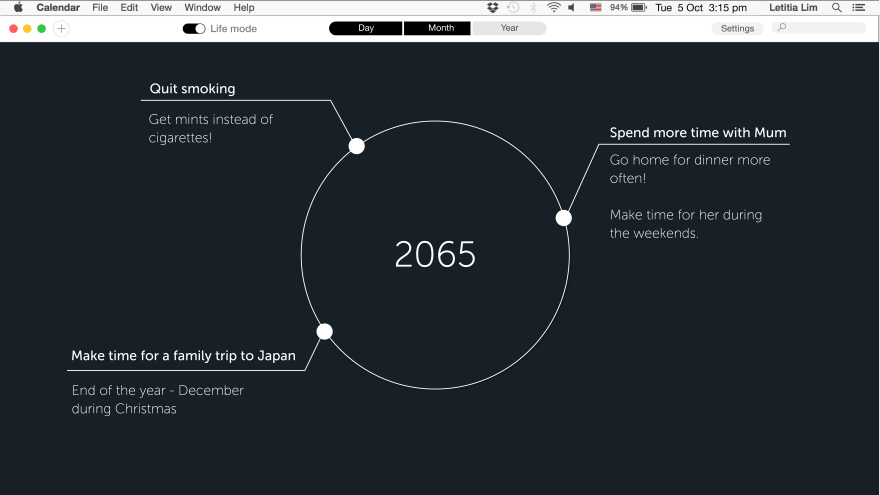 In the year 2065, you might come to realise that most people around you have a new figure in their life, one that is similar to their birthdate, except that the contrary — a death date.

As daunting as that date may sound, it is intriguing how there is an increasing trend of people lining up at clinics just to find out about their life expectancy, though besides undergoing genetic predisposition DNA testing for diseases, there are many other ways you could find out about your life expectancy. For example, utilising facial recognition systems to generate an estimated life expectancy is becoming increasingly popular as well due to its painless procedure and the fact that it is more precise by taking external environmental factors into consideration, while scanning facial features for signs of ageing.

This increasing trend could very well be due to the ripple effect this new significant date could bring about. If you have not already known, the new information on our life expectancy has brought about many changes in our lives now, both subtly and drastically. Fundamentally, the way we perceive time has changed. With the introduction of a deadline, your mind subconsciously begins to count down to that eventual conclusion to your life. It is, however, as accurate as it may be, only an estimate of the number of years you have left. External forces such as unnatural deaths are unable to be reflected.

As a result of the increasing trend of people, young and old, probing into their expected lifespan, we are seeing the growth of a new breed of elderly — one that is defined as young people who have, unfortunately, short life expectancy.

So how might this new breed of elderly cope with their short life expectancy?

Based on the terror management theory, an idea in social psychology conceived by Jeff Greenberg, Sheldon Solomon and Tom Pyszczynski, "Death creates an anxiety in humans; it strikes at unexpected and random moments, and its nature is essentially unknowable".
Death sets everything in perspective. Once death is perceived to be within sight, anxiety accompanied by urgency inevitably starts building up and that would trigger a change in human behaviour. With the knowledge of a deadline in life, it is likely that people would take some form of action, such as try to delay the date by attempting to change their lifestyle.

Daily Calendar - Straight to the point. One at a time.

Only the nearest upcoming task is being shown at any one time. The focus is on what is important at the moment of the day, without any distractions of other tasks, forcing you to think through what exactly your priority is. An overview of the upcoming tasks is shown through scrubbing of the slider. Precision of the time left is shown right down to the very last second, aiming to induce a sense of urgency and even decisiveness in your actions.

Monthly Calendar - The important ones, in one glance.

Time now runs in the reverse direction, a reflection of the situation that is happening, where time is now being perceived as depleting in a decreasing motion.

We've decided to focus on what is important right now, and do away with all the noise that is surrounding us. We have lost the grid and the days of the week, focusing only on the day at the point in time, annotating just that day. Besides that, the important dates of the month are also highlighted as well, bringing the focus on those dates.

Yearly Calendar - An overview for the future.

We all enjoy setting resolutions at the different milestones in our lives — in a bid to keep us reminded that we need goals in our lives to aim for. As the scenario has changed, the way you plan would change as well. Instead of showing just an overview of the tasks for the year in a spread, here is a new way of planning for the remaining years.

With your predicted life expectancy figure already keyed into the system, every single year till the very last one would be displayed in a timeline form. This allows you to plan and mark down in your calendar the milestones you would wish to achieve at every step of your life. What this serves is a visual representation of the various tasks you have planned to achieve before you eventually depart. This once again further emphasises the importance of achieving your goals before the end of your life.

The way time is being perceived has totally evolved. By manually switching to the Life Mode from the normal, you are deciding that you want to make the change in your life, that first step to switching the way you perceive time entirely. In the Life Mode, time might seem like it is being sped up, almost to a point where it might even seem emotionally taxing or intimidating.

However, It is intriguing to speculate what it might take for an individual to make that first switch to the Life Mode. Would it be used by only the new breed of elderly?

The strength of this project is that they talk about more complex notions of people and understanding the idea of time as a very individual thing.

We had two projects that, from different perspectives, were looking at what time really can mean. The iCalendar spans our lifetime. This project not only speculates about our own life but how different kinds of evolutions are connected with time itself…The strength of iCalendar is that they talk about more complex notions of people and understanding the idea of time as a very individual thing.