With more than 126 years of history, as well as numerous championships, Olympic athletes and trailblazers among its 36 varsity sports, Stanford University required much more than a room packed with NCAA trophies, Directors' Cups and memorabilia. The Cardinal needed a living, constantly evolving space to reflect the work ethic, innovation and scholarship that define Stanford Athletics.

The 18,000 square-foot Home of Champions tells the Stanford Athletics story through areas dedicated to the thrill of the win, the hours put into training and study, the firsthand stories of student-athletes and alumni, and the multitude of sports innovations born on the Farm. Reflecting the innovative Stanford spirit, the space features cutting-edge interactive elements including the hall of fame table, where visitors place printed books of student-athlete rosters to activate a touch-controlled surface with photos, stories and more.

From the most recent national championships to the first Big Game, from the Wow Boys to the women of the 2016 Olympics, the Home of Champions explores every era of Stanford's history while keeping an eye on its vibrant present and bright future. 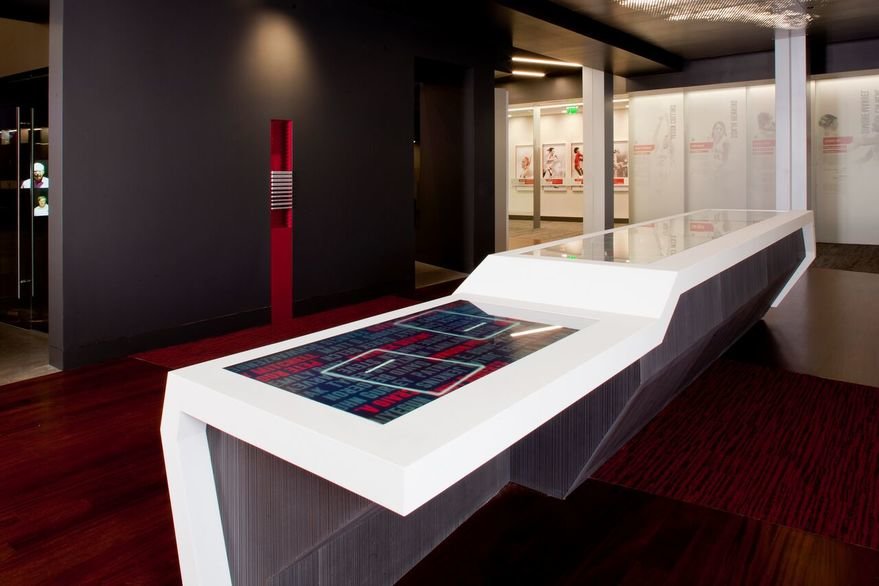 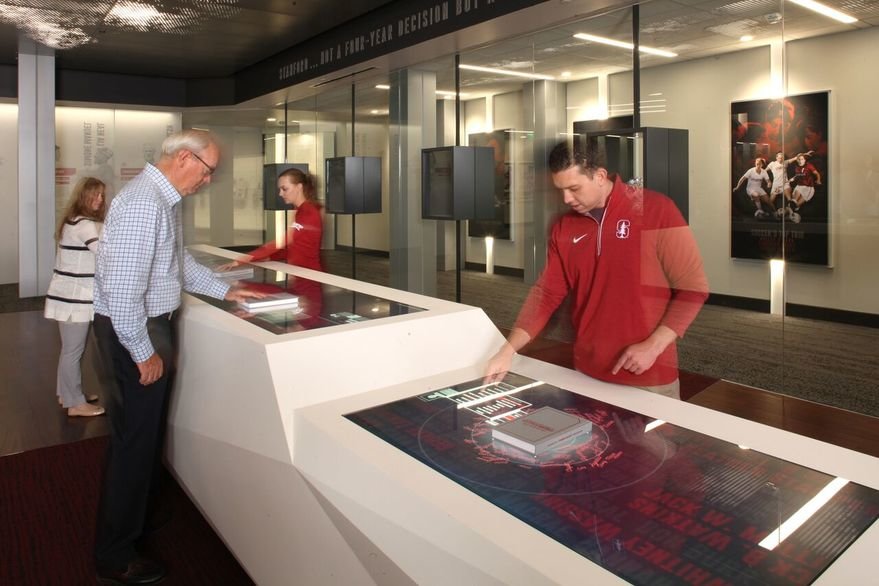 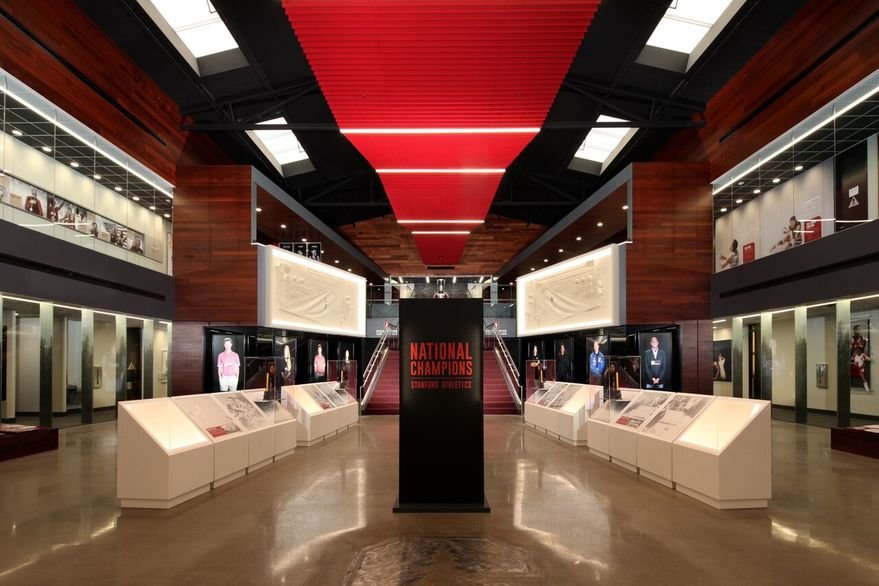 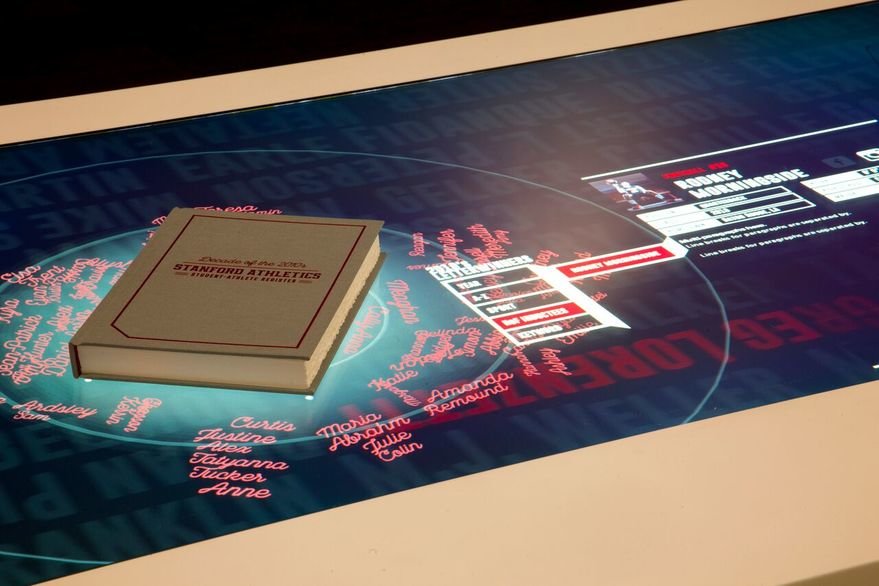 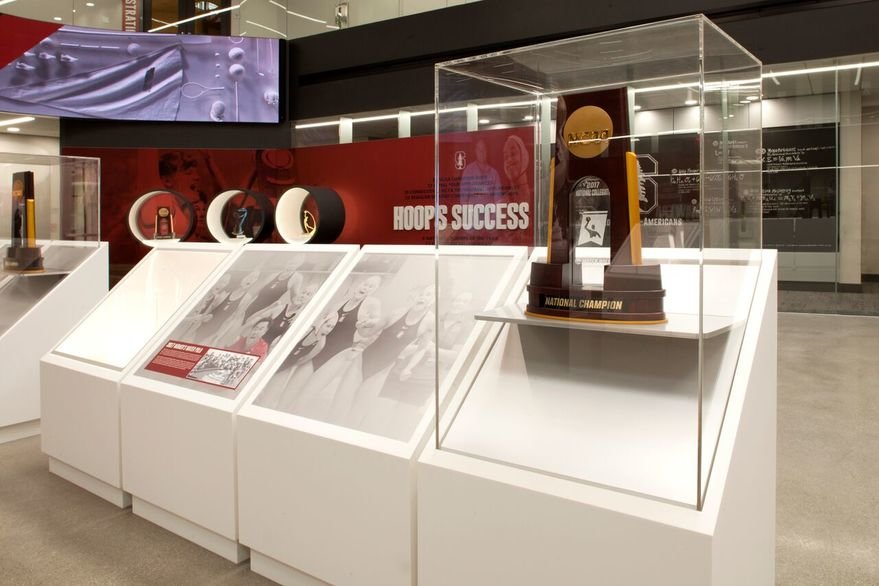 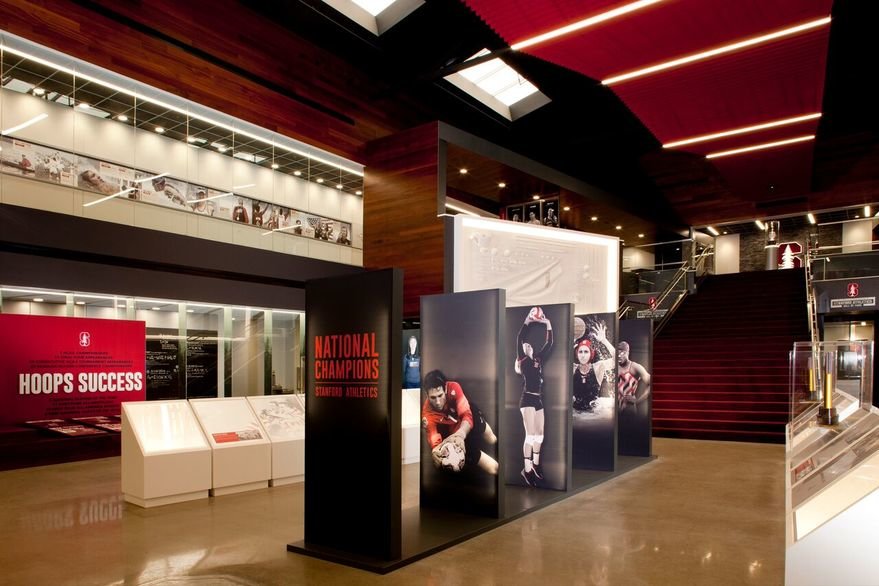 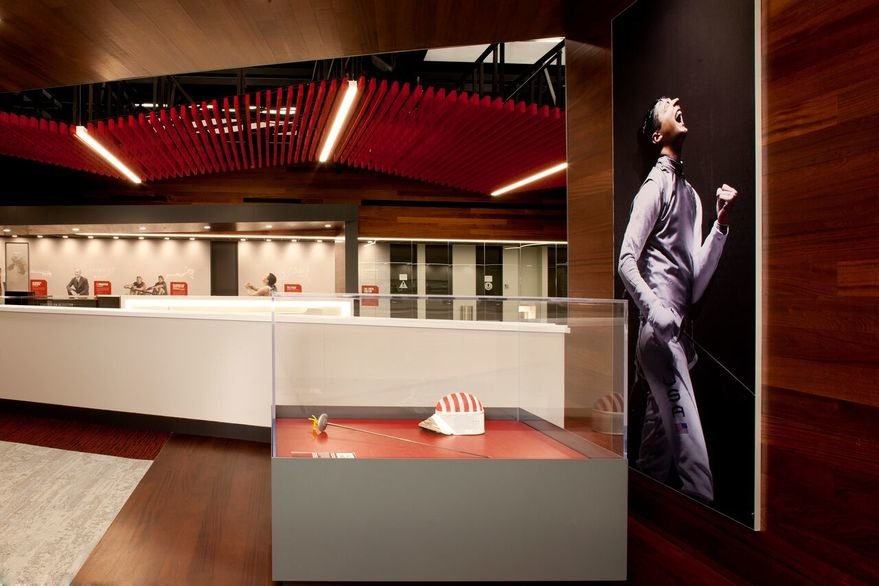 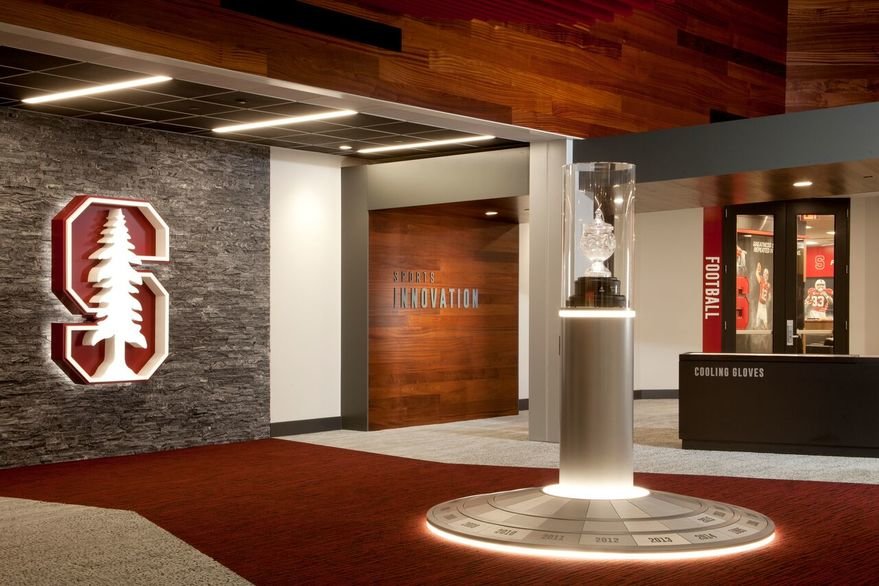 Formerly a basketball court, the Home of Champions was retrofitted and reimagined within the existing architectural structure. The courts were surrounded with two-story glass walls and ringed with a hallway that connected to athletics offices and student-athlete dining areas. The Home of Champions adapts the existing structure in a space that feels entirely new. An immense piece of custom-designed casework, flanking the central staircase represents Stanford's 36 athletic teams; it sleek design creates more intimate divisions of displays and directs visitors towards the upstairs exhibits. Angled glass panels like wings that edged the former court were coated with semi-transparent acrylic prints of redwoods, juxtaposing the highly modern with the natural. The player of the year displays set key trophies metal casework built into the glass, inviting users to interact with the space by looking through the trophy case to a player graphic on the wall behind, asking the viewer to interact and engage.

The Home of Champions contains room for expansion and growth while preventing clutter. While Stanford has won 134 national championships and 23 Directors' Cups, an award recognizing success across collegiate athletics, only select trophies are on display in the expansive space. To reflect the program's humble, workhorse personality, the Home of Champions features only one crystal Directors' Cup on a lit, elevated pedestal, with panels that honor each year the award was won.

While the facility was under construction, Stanford won an additional three national championships, demonstrating the need for a living, updatable space. The story panels, fabric-frame displays, and dimensional lettering can be refreshed in order to reflect the program's most recent successes, providing a new experience for its viewers each time. On the first floor, five displays include life-size graphics and memorabilia cases, that visualize the story behind the most recent national championship teams, emphasizing process and dedication. Two feature exhibits on the first floor also allow flexible space to highlight different stories in rotating; backlit display rings can contain a broad range of memorabilia, and the talker panels and dimensional letters can be changed out for new content. Other custom casework offers spare, floor-to-ceiling displays of memorabilia that tell the stories of coaches and championships in more depth, giving readers space to linger and focus.

The walkpath through the space emphasizes moments of delight and discovery. Corner displays showcase Stanford's individual awards—including Jim Plunkett's Heisman Trophy and the Honda Award—but a specialty film coating the glass renders it opaque until viewers stand directly in front of it, enticing visitors to move throughout the space. Upstairs, vertical blade graphics highlight dynamic graphics from each of the 36 varsity sports, creating a graphic that changes in perspective as viewers pass by.

The Home of Champions extends Stanford's emphasis on academic achievement through all of its displays. All captions on scholar-athlete graphics include their major and graduation year, a reminder of the program's emphasis on scholarship. A chalkboard display, behind a protective layer of acrylic, honors the ten most recent Academic All-Americans with chalked statistics and equations representative of their sports. Upstairs, memorabilia cases highlight sports innovations developed at The Farm, including concussion-testing devices and virtual-reality training.

Throughout the Home of Champions, the materials and finishes echo the tech startups and natural surroundings of Palo Alto. Concrete, exposed ceilings, and raw black metal finishes infuse the space with creativity and edginess, while the polished wood ceiling adds warmth and reflects the redwood forests of Northern California. In the hall of fame area, a pattern of circular lights mimics a redwood forest canopy with a perforated, edgy feel consistent with the tech-driven design.

To identify the key narratives and stories, Advent interviewed dozens of current and former student-athletes, coaches, donors and other key stakeholders. Design charettes brought together copywriters, graphic designers, creative directors, and Stanford stakeholders in a space to collectively brainstorm innovative solutions and applications of the Stanford brand. Advent was involved in the process from initial concept design through production and installation, ensuring a polished facility from end to end.

On the first floor, 12 vertical high-definition screens depict video of scholar-athletes and alumni that reflect the athlete's successes beyond the field. The screens at first appear to show still images that subtly shift or blink, enticing viewers to engage with the screens. Fans can choose between select interviews with 21 Stanford greats—Ogonna Nnamani, Steve Smith, Maverick McNealy—that allows athletes to tell their own stories. The screen's height and life-size scale are designed to immerse the viewer in a one-on-one conversation with these Stanford athletics legends, creating a personal connection with the program's history and its brand. Going beyond their athletic accomplishments, the interviews discuss the process behind each athlete's success and how the Stanford experience prepared them for the world beyond.

Stanford's program emphasizes collaboration and community in its mutually supportive teams. The faceted, all-white interactive table in the Sydney and Theodore Rosenberg Hall of Fame reflects the brand's values and offers both extensive and intimate access to the entire community who participated in building the program. The table highlights the stories of 413 Hall of Famers with photos, key statistics, inspirational quotes, multimedia, and real-time connections to their social media pages. The Hall of Fame also contains 10 custom-printed books with RFID chips, organized by decade, that contain nearly 15,000 names of letterwinners throughout Stanford's 126-year history. When a book is placed on the interactive surface, the names of that decade's Hall of Fame members float to the table's surface, unlocking individual stories, photos and more. Former student-athletes are invited to add to the space with additional stories, images, and statistics, creating a living display that includes each visitor in the narrative. In a private space set off from the Hall of Fame, story rooms allow visitors to record audio and recount their own memories. Beyond reflecting Stanford's history, the space adds to the record and prioritizes inclusion and diversity.

Welcoming visitors into the space is a numerology board inspired by an art installation in Stanford Graduate School of Business ("Ways to Change" by Peter Wegner). The minimalist, tech-driven display is both flexible and reflective of Stanford's emphasis on innovation. Its constant motion captures Stanford's dynamism and current energy while simultaneously recognizing its deep-rooted history. Approximately 62 sets of data are rotated through the display, which is easy to update and make additions with a custom-designed content management system.

Wrapping around the first floor, a 60-foot LED ribbon board offers flexible, customizable content that can be personalized to events hosted in the Home of Champions. Capable of streaming live events, like the Olympics, it also contains over 80 hours of high-definition 4k video and an updatable historic timeline. The immersive multimedia adds another element of motion and interaction to the space; the ribbon board can play energizing hype videos to motivate players or display more subtle brand messaging to enliven the background of the space.

To identify the key narratives and stories, Advent interviewed dozens of current and former student-athletes, coaches, donors and other key stakeholders. Design charrettes brought together copywriters, graphic designers, creative directors, and key Stanford athletics stakeholders in a space to collectively brainstorm innovative solutions and applications of the Stanford brand. Advent partnered with Stanford's communications team to unearth 1,740 images and thousands of former student-athletes to ensure that the space represents the breadth of Stanford's accomplishments.