Nature supplies us with infinite wonder and beauty. A flower speckled with pollen, a fall leaf covered in morning dew. If you take a moment to look around, you will be amazed by what there is to see. Even in a busy city you can find nature creeping in and doing something breathtaking.

We are surrounded by these spectacles yet so rarely do we take the time to observe it. We are so distracted by the fast pace of our times and the technology that supports it. Technology is an incredibly powerful tool yet the way we use it often feels limiting. We mainly engage with technology by sitting down at a computer or staring at a phone. For many years I've wondered what role technology has in the outdoors. Often I find it at odds, these screen based interactions tend to remove us from the world around.

Look aims to use technology to heighten outdoor exploration while still keeping us immersed in our surroundings. It is a project geared towards helping kids discover the beauty around them and spark their curiosity to explore. Kids have a natural affinity to probe the world around but our screen based technology often minimizes this. Look hopes to support this act of probing and encourage kids to hold onto that curiosity.

Look begins with a book which contains all the leaves a child can find in their city. With this book they can wander around in search of leaves yet to be found. Once they think they've found a leaf they can store it and scan it to make a digital copy. Digitizing it will reward them points and let them know if they correctly identified the leaf. Through the digital interface, they are exposed to a few fun facts and encouraged to go back out and continue their quest to explore the natural world. Look around, there's a world yet to be discovered. 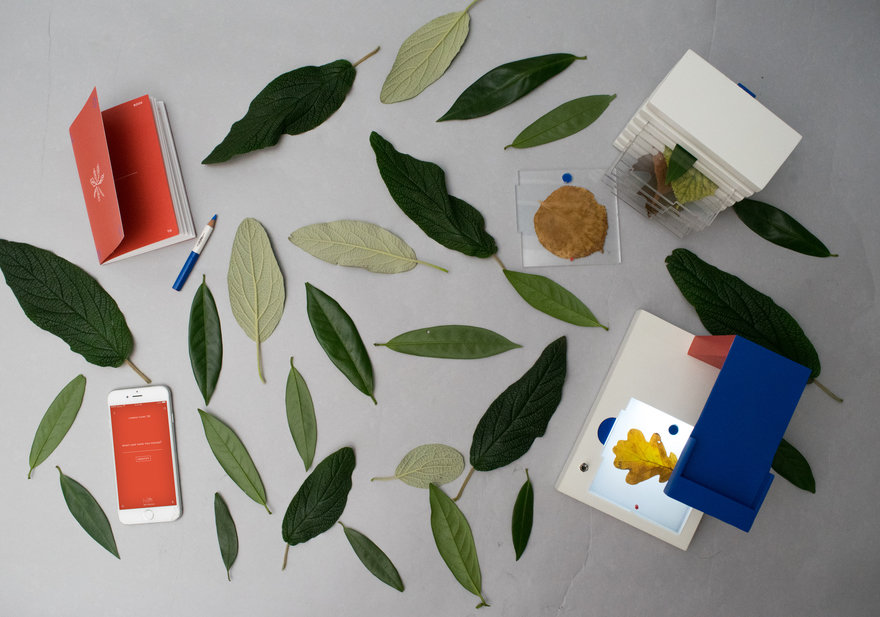 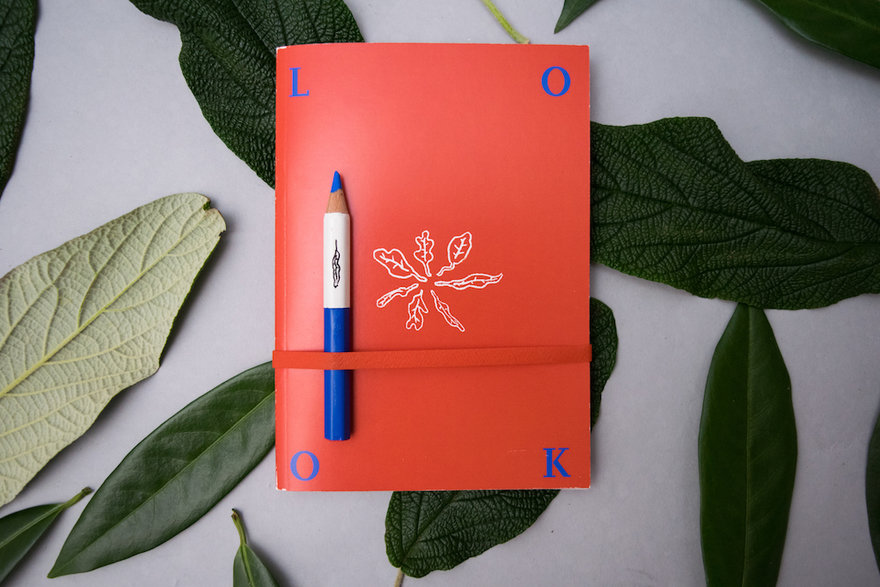 Look Booklet Look begins with a book to help collect. It comes with a pencil to mark if you've found a leaf. 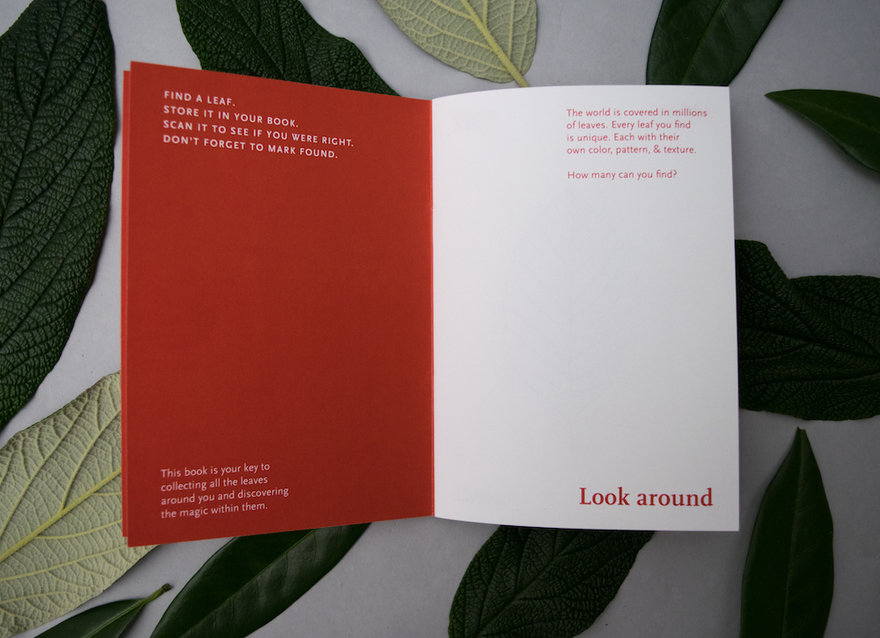 Booklet Page 1 The first page of the book aims to encourage and inspire kids to start collecting. 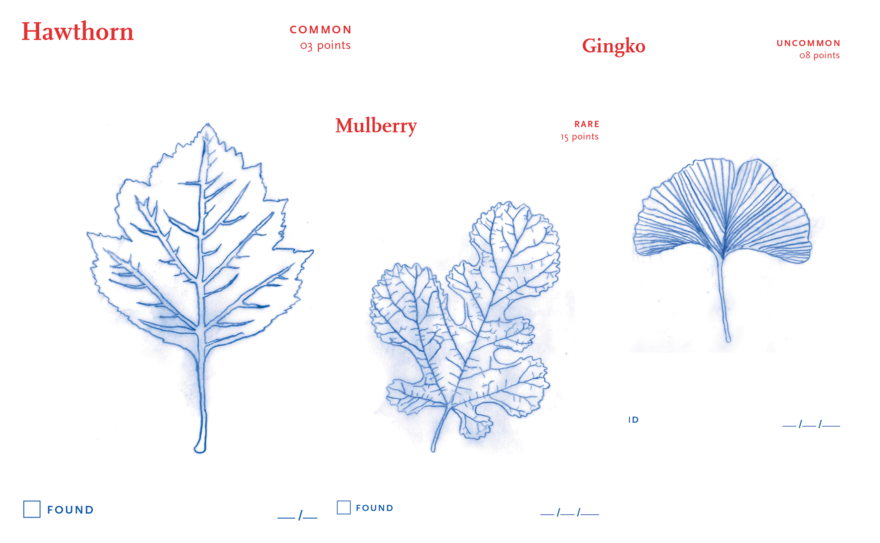 Inside the book The book contains a set of leaves you can find in Copenhagen — each with their name and a commonality ranking. 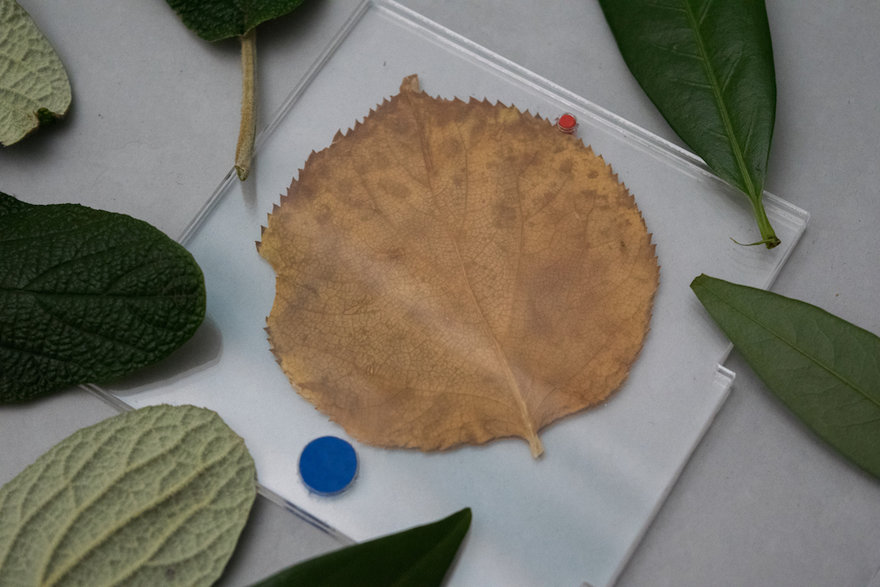 Storage Each leaf can be place into a slide to highlight and secure the found leaf. 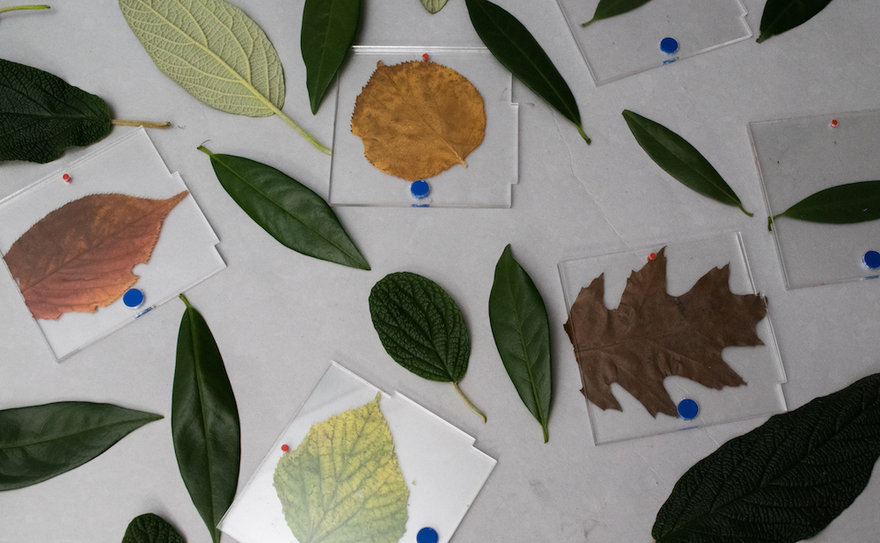 Collection With these slides you can slowly build up a special and unique collection of leaves. 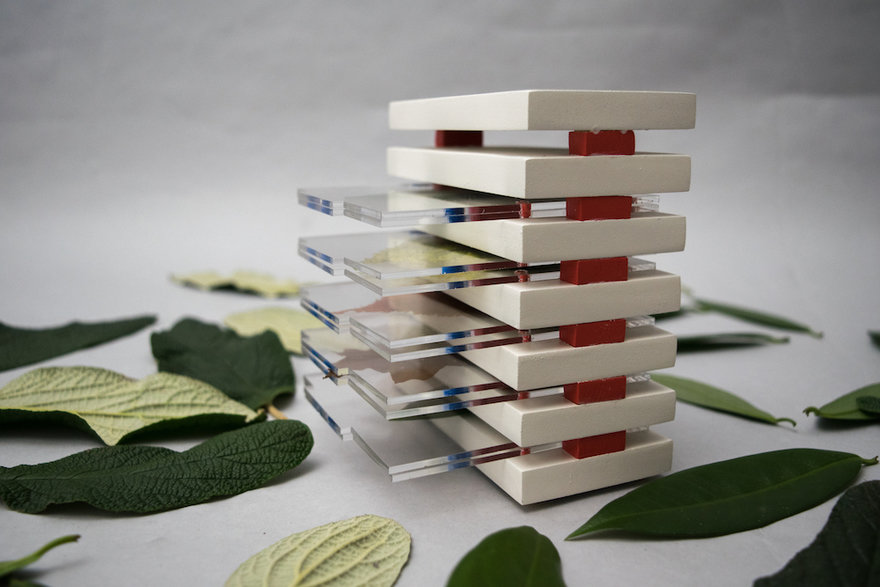 Shelf Look comes with a shelving unit that allows kids to build their collection and keep it all together. 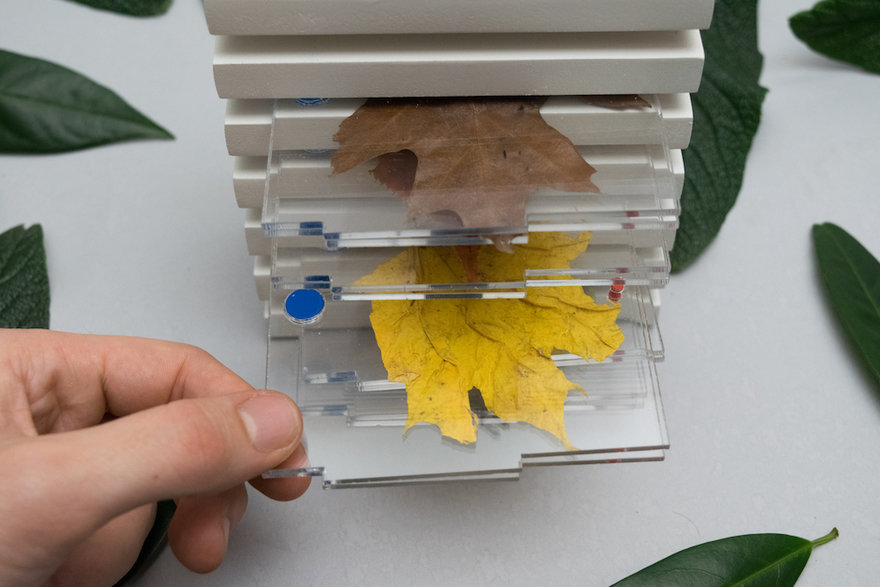 Leaf exposed The shelf is designed to expose some of the leaves as to let kids easily re-engage with their leaf. 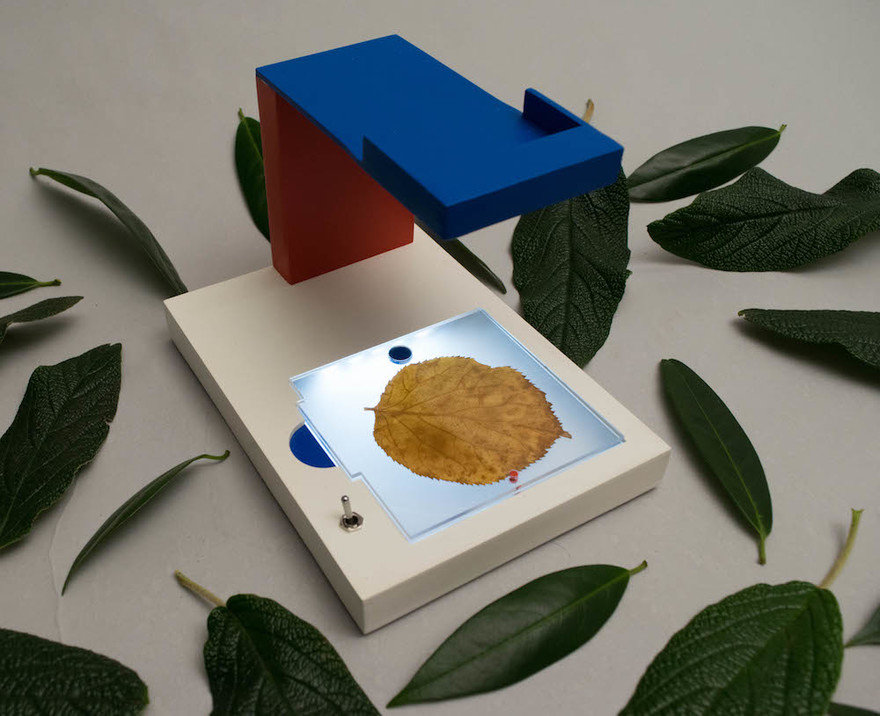 Scanner Look comes with a scanner that lets the kids see the leaf in more detail. 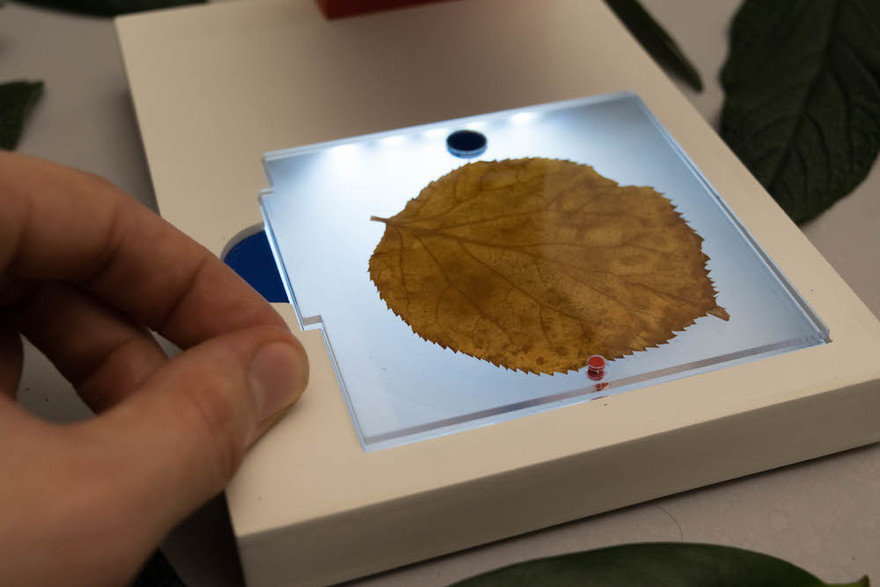 Light switch The scanner has a switch on the base that illuminates the leaf exposing parts of the leaf that may have gone unnoticed. 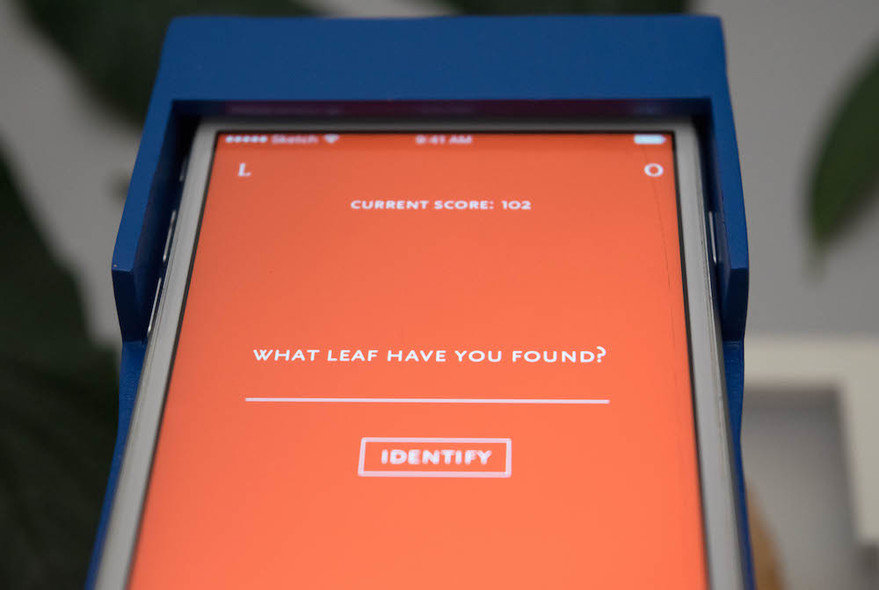 Phone Slot The scanner has an area for the phone that allows the kids to properly identify the leaf. 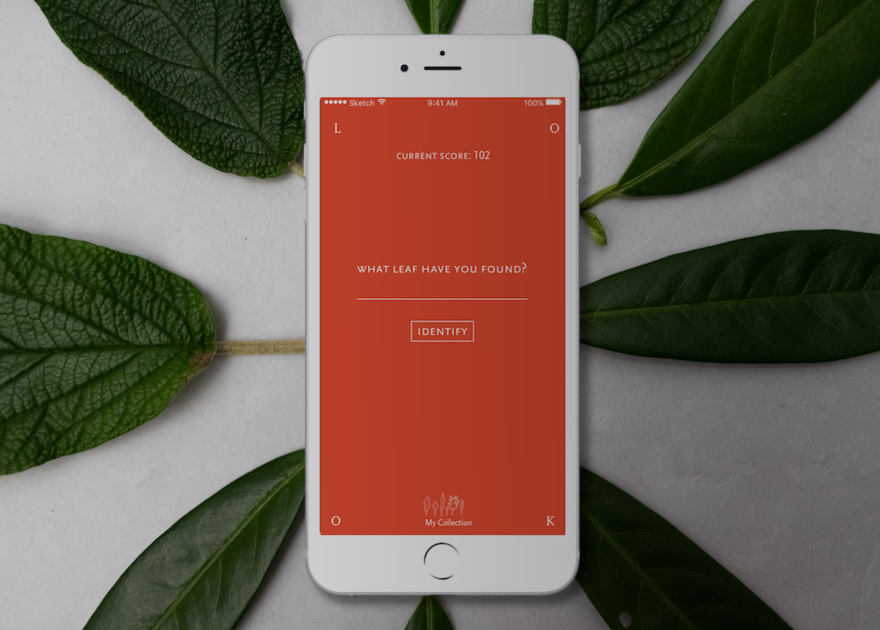 Look App The app starts and begins with the question "What leaf have you found?" This aims to subtly inform kids that the focus of their time should be outdoors, not on the screen.

Look was built and conceptualized during a 10-week final project at Copenhagen Institute of Interaction Design, CIID. I started with the guiding question of "Can technology play a more active role in facilitating outdoor exploration rather than minimizing it?" As mentioned I have struggled with answering this question and what better time to investigate it than during a 10-week self guided project. I also believe that introducing kids to nature can lead to a future where people respect and care for our planet. These were the two driving forces that helped me carry on through this project.

Throughout the ten weeks, Look went through many phases. I began with research, both at the desk and in the field. I conducted about 7 expert interviews that helped define what my role would be in designing for children. One quote that stuck with me came from a designer by the name of Stiven Kerestegian who said, "For a large percentage of children a blank canvas is paralyzing." This helped me understand what my project should do, I wanted to design something that could help kids get through that initial paralysis and then let them do the rest.

After this initial research phase I entered a long journey of experience prototyping. I conducted five different experience prototypes that lead me to the final outcome, Look. Each of these prototypes explored different parts of my final concept. Some prototypes focused more on collection others on storage, scanning or digital play. For each prototype I wanted to really understand what was grabbing kids attention and getting them excited about the outdoors.

In my first prototyping session I ended up testing collection, storage, and digital play. During this session I was incredibly fortunate to see the digital play almost immediately result in further collection.

For this session I was working with a class of 6 year olds. I collected leaves around a school and told kids to find those leaves. I found the conversions with the kids when trying to identify led us to discuss the leaves in more detail — talking about the form and texture.

For the storage I wanted to see if kids were interested in memorializing leaves or objects from nature in some way. To do this I made a round disk for pressing and gave the kids paper to glue the leaves onto. The kids enjoyed the pressing action and seemed to be proud of the leaf they found.

I made a short animation in Adobe Premeire that rewarded the kids for finding a rare leaf. This almost immediately resulted in the kids running around to see what other things would reward them.

My first prototyping session was relatively successful but I wanted to figure out a way to make it more hands off. I very much had to be present to conduct the first session and wanted to design something that allowed me to take a back seat. I also was inspired by some of the conversations around the aesthetics of the leaves and wanted to play around with emphasizing that.

I wanted to make something portable so I designed a simple press made of wooden blocks. On the back was a pocket for paper which the leaf would be pressed onto. I found this design quite successful and although my final version was different this design certainly informed the final page in my booklet.

My hope with the digital component was to get kids paying attention to the form, texture, and colors of the leaf. My idea was to use the leaf to generate a 3d rendering of it, something I was calling a leaf tree. I hoped the kids would get excited about building a digital forest and want to find leaves based on their aesthetic properties. This was my least successful prototype.

After what felt like a step back in prototyping success I decided to refocus. I hadn't really made an attempt to test the scanning unit and wanted to think about making a smooth experience from storage to scanning.

My storage prototypes in previous sessions had been successful but still felt a bit clumsy. For this prototype I decided to use magnets which allowed me to get rid of the gluing process. Also by using acrylic sheets I felt I was able to highlight the leaf in a nice way while keeping the act of storage simple. I also tested a very simple storage unit to see if this peeked the children's interest.

For the scanner I realized that I could leverage the phones camera to scan which informed my design of the object. I also decided to incorporate a lightbox to see if this added element would spark interest with the kids.

With my third prototype I felt content with the design for the storing and scanning part of my concept and wanted to focus on the collection and digital play. Most importantly I wanted to ensure that the digital play resulted in more time outdoors and less time on the screen.

I designed a simple four page book with leaves that the kids could find around the school. Each leaf had points and a commonality ranking associated with it. I wanted to see if this was enough scaffolding for the children and if this could be done in an analog fashion in order to maximize time away from the screen.

I built a simple application in openFrameworks to simulate identification of the leaves and some reward mechanics. The kids would hold the leaf to the computer and I would manually identify by pressing a button. Once the leaf was identified, the kids were rewarded points and received a fun fact about the leaf.

With my third and fourth prototypes I felt I had my design locked in and I moved into the build and polish phase. I spent time really thinking about the branding of the product and trying to make each object a part of a cohesive family. Days were spent sanding wood, drawing icons on paper, tracing leaves, and spray painting for many hours. When I shot my concept video I was fortunate enough to get a chance to see kids interacting with my final version. It was really rewarding to see kids playing with it and engaging with nature in new ways.