Relationships and networking have undergone a massive evolution over the last decade of social networks and personal publicization on the internet.

In 2013, The Singapore Economic Development Board, with The Secret Little Agency, reached out to Tellart to conceptualize, design, and build a "connector" that both used and transcended the digital media that so often replaces a human connection today. As a group dedicated to facilitating productive connections between Singapore's businesses and the world, the EDB wanted to create a statement piece that could travel to high-end conferences and spread their message.

The result of this request, The Coffee Connector, is a delightful, thought-provoking human experience. It is a beautiful object, a seamless digital interaction, and a social experiment all in one.

The Coffee Connector only brews a cup of coffee when two attendees work together to request one. Once you've found a partner, the machine's exposed kinetic brewing process engages viewers and uses interactive touchpoints to guide you through the brewing process, and through a meaningful conversation with your partner. The whole experience supports the messaging of the EDB, highlighting Singapore's ability to connect with global companies doing business in Asia.

After users approach the machine–drawn by its attention-grabbing appearance and the promise of coffee–and find a partner, both attendees are asked questions about their home location and interests, creating an easy entry into conversation. They leave the machine with a custom-printed paper cup sleeve that includes reminders of their connection, and acts as a prop for further conversation with other conference attendees.

Referred to as the "LinkedIn of Coffee Machines" by PSFK (and in more ironic terms by other press - such as PopSci's "Introvert Torture Device" headline), the Coffee Connector created a larger conversation about the role of technology in socialization. With a carefully and beautifully designed experience, it succeeded in facilitating new and meaningful connections between people in a world where face-to-face interactions have become rarer than digital ones.

Tellart collaborated withThe Secret Little Agencyon the concept for the experience, and was responsible for interaction design, industrial design, engineering, fabrication, and deployment. Tellart worked withOctoPD on design and b 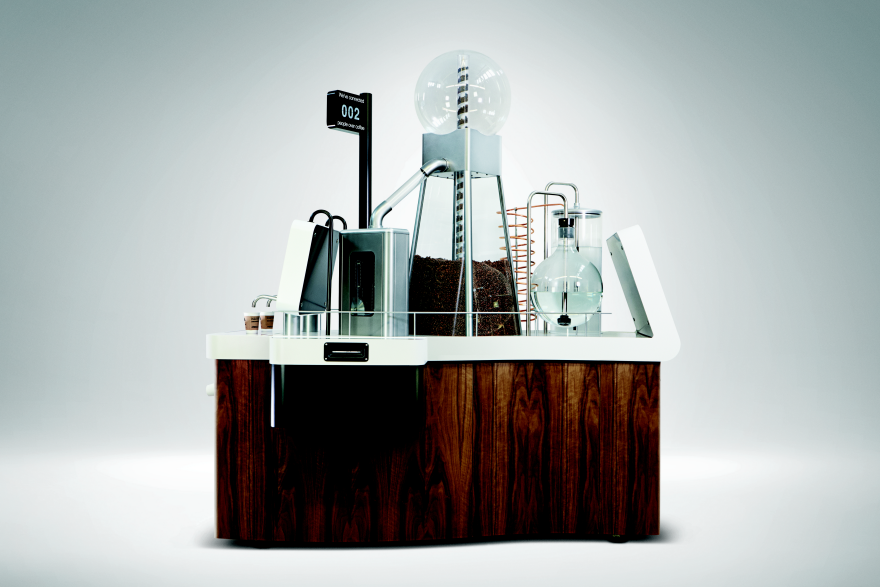 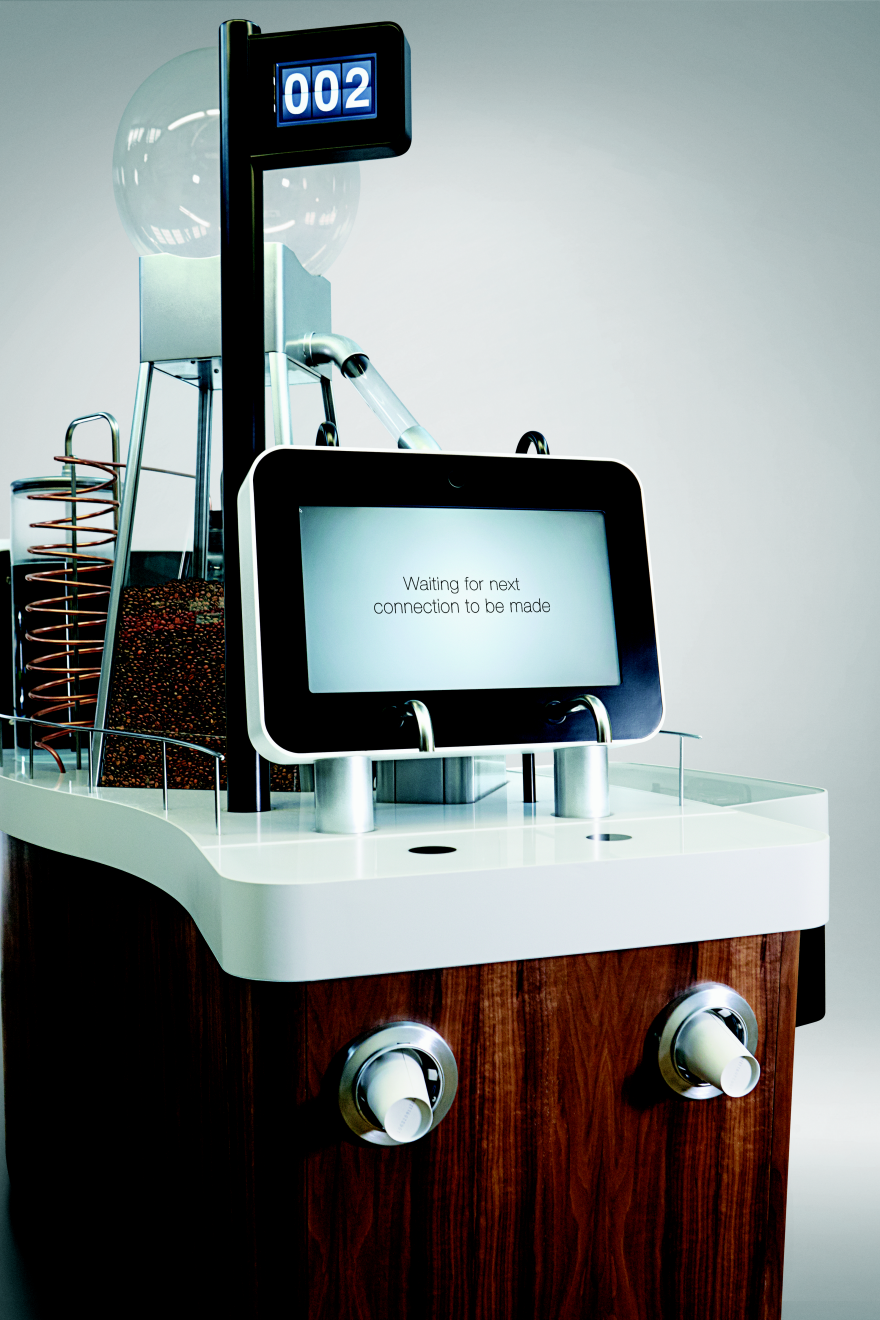 The Coffee Connector The machine keeps a tally of total connections made during an event. 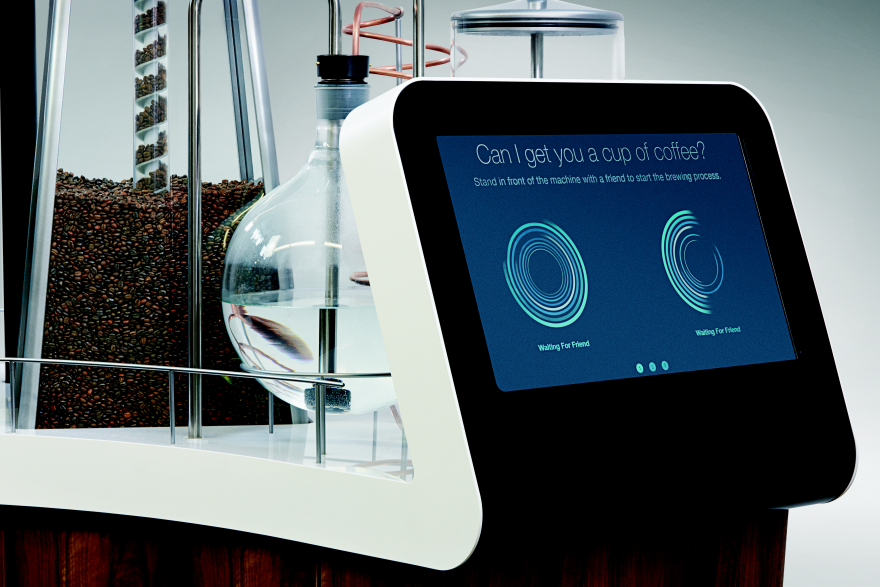 The Coffee Connector The screen prompts users to find a partner. 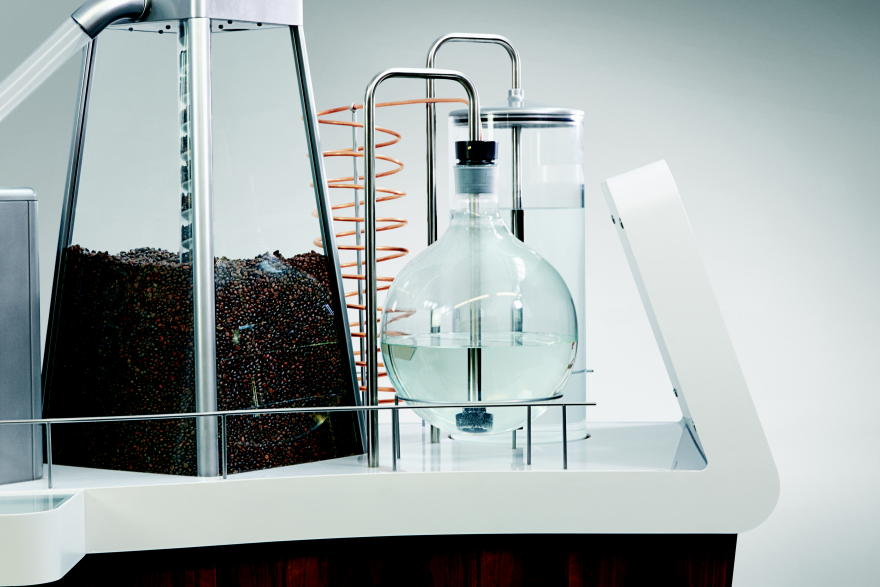 The Coffee Connector Drawing inspiration from the elegance and functionality of a jet engine, the design of the machine exposes the brewing process through hand-crafted, high-end materials. 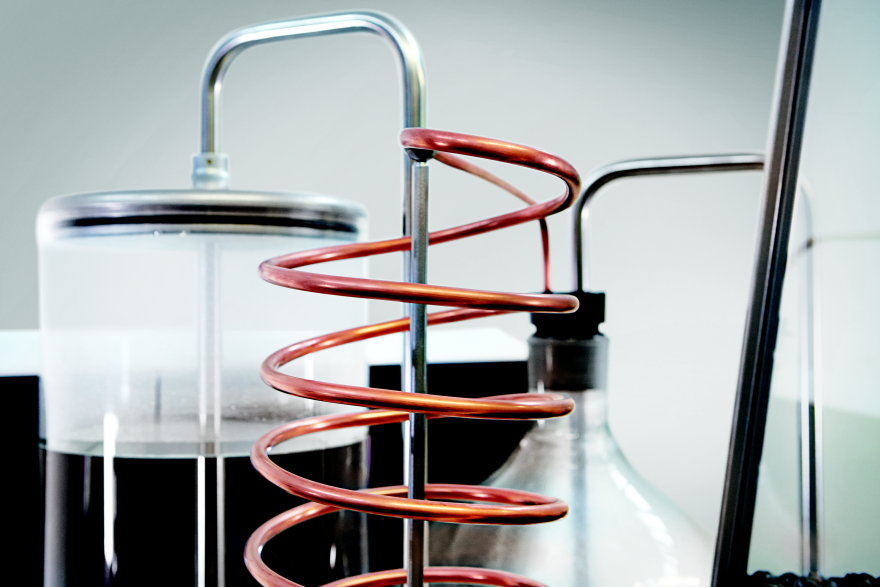 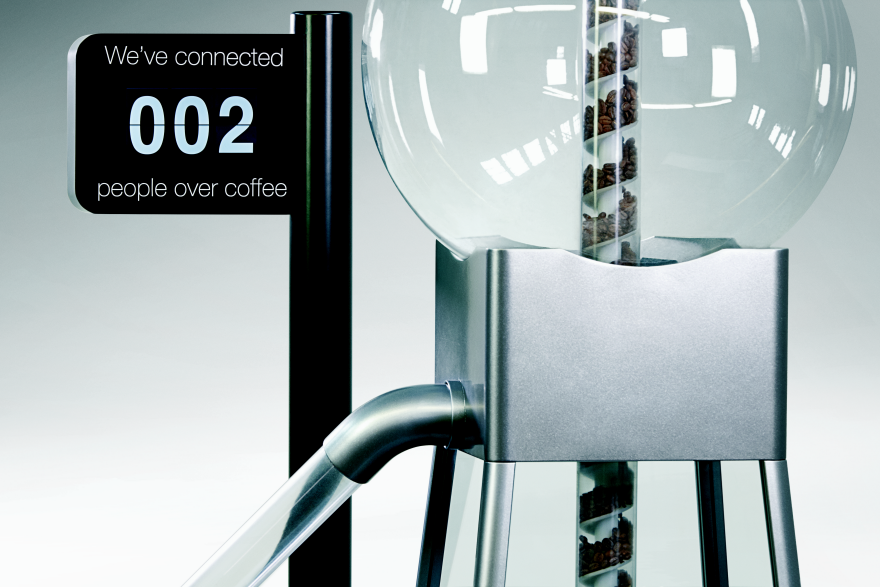 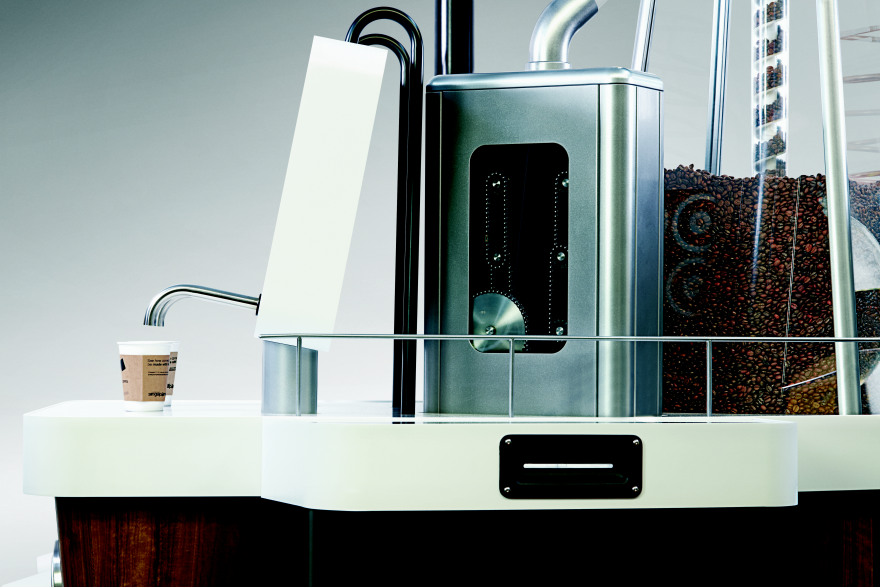 The Coffee Connector The machine delivers coffee, and then guides users to the custom sleeve printing and cream & sugar station. 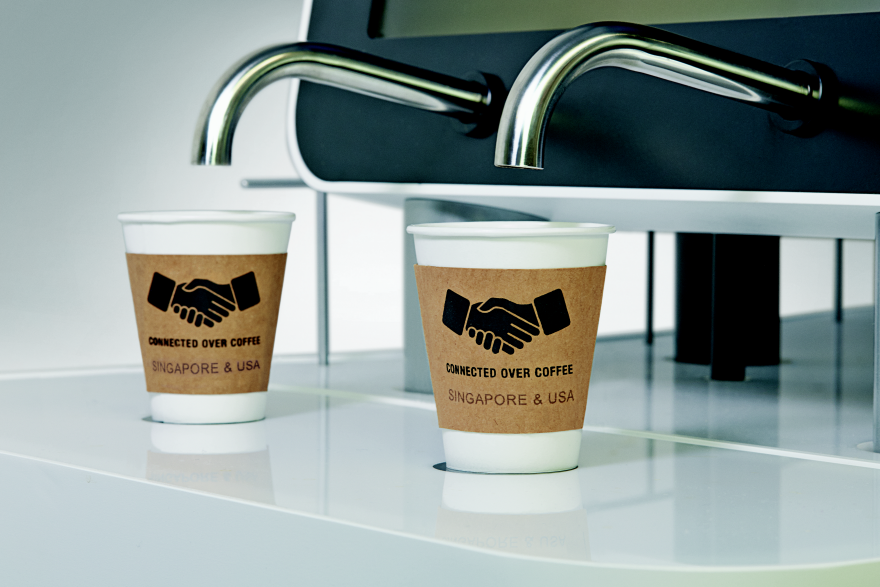 The Coffee Connector Each coffee cup comes with a custom printed sleeve with details of their connection. 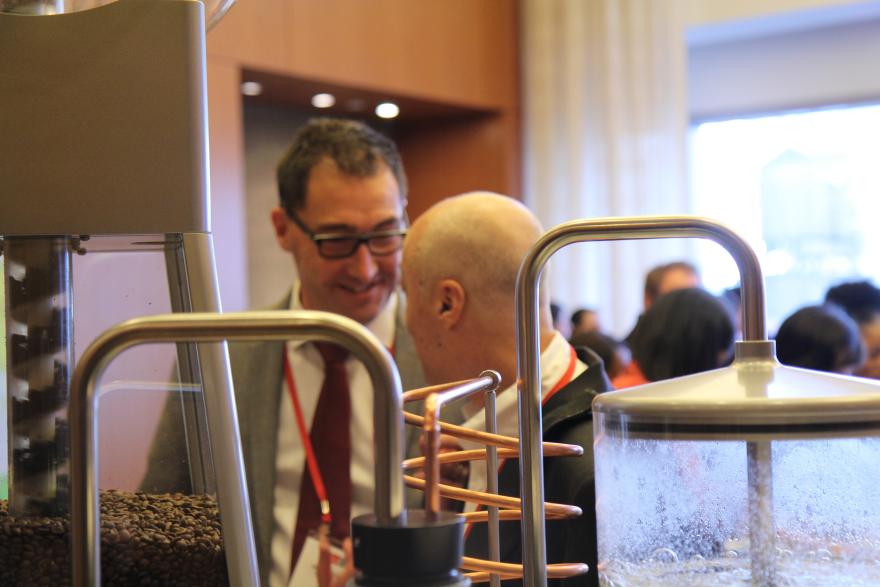 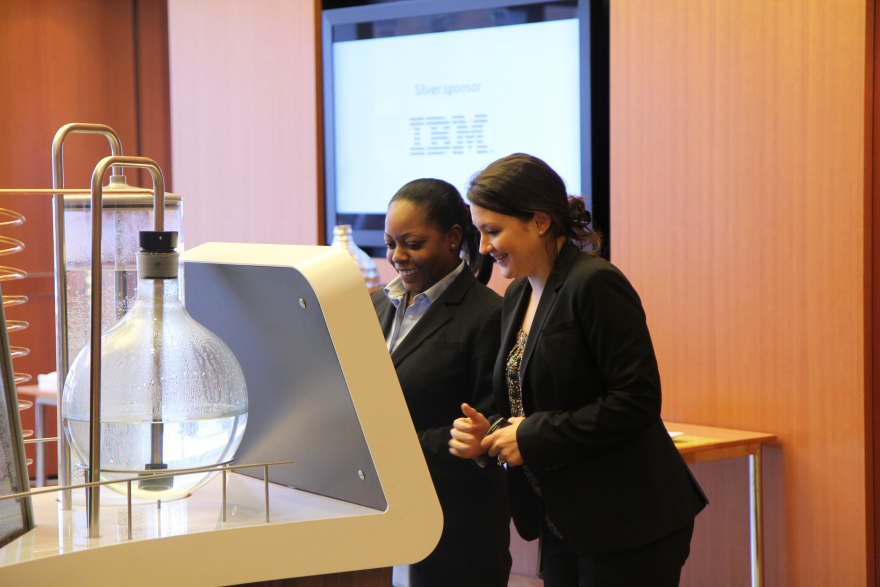 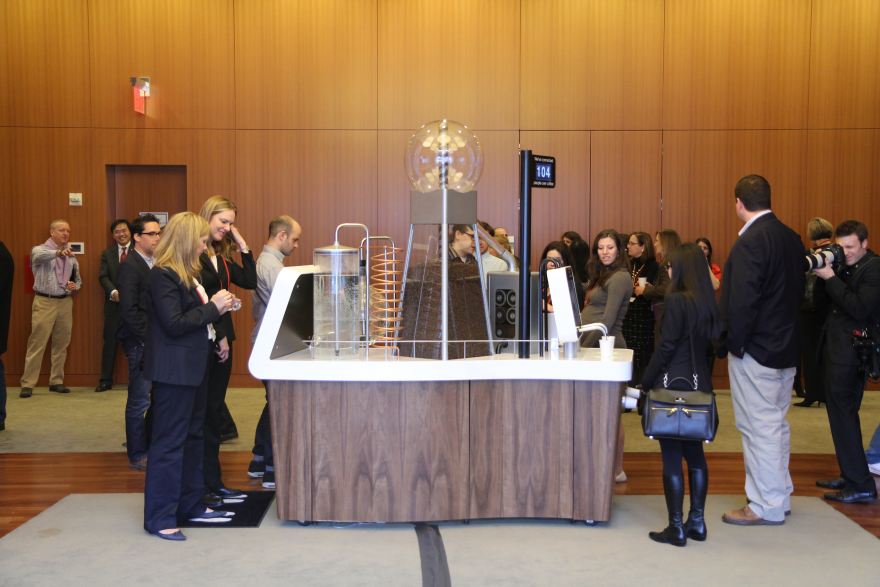 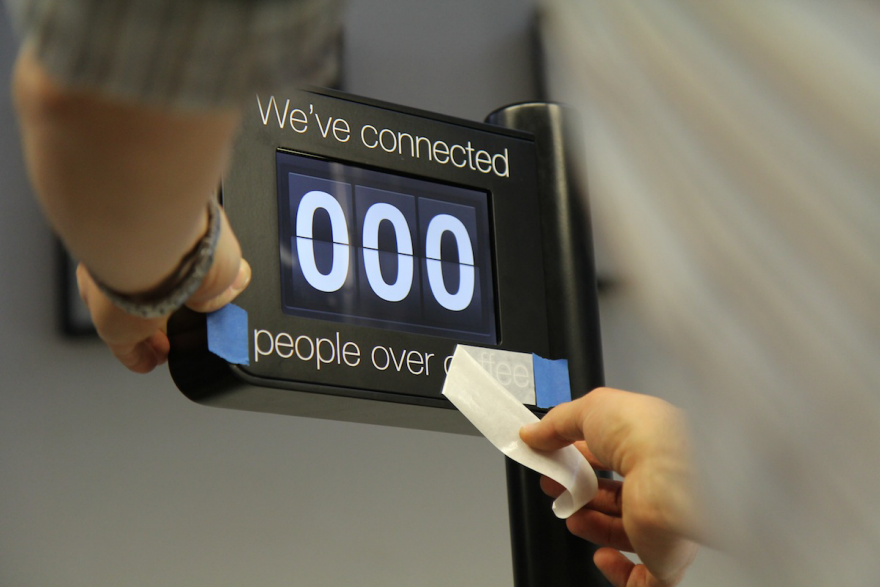 The Secret Little Agency approached Tellart for the Singapore Economic Development Board, looking to create a "connector" for high-end conferences that would engage attendees and communicate the messages of the Singapore EDB. We needed to use interactive technologies to create an experience that would capture the attention and engagement of busy attendees, while providing them with some worthwhile benefits.

We focused on messages (the desire to connect), audience (sophisticated professionals), and context (executive level conference) to develop a concept. The Singapore EDB wanted to highlight their ability to connect global professionals and provide a high-technology environment for success; the audiences they were reaching out to would be sophisticated professionals at high-end conferences, interested in making meaningful connections–but even the most experienced conference goers can struggle to find a way to begin conversations with strangers.

Working together to iterate the concept and form, the project team developed the final Coffee Connector concept: a coffee machine that would happily provide you with a delicious, hot cup of coffee, but only when you request one with another conference attendee. Its beautifully articulated coffee brewing elements distinguish it beyond the typical conference coffee maker, and draw attendees in to begin their interaction, where they immediately realize that they'll need to recruit a partner to receive their coffee.

The project team iterated the user experience journey in tandem with the design of the installation, creating a seamless experience from start to finish. As they approach the machine, silhouetted footprints on a custom floormat guide conference attendees to the correct spot in front of the machine. The touchscreen, after prompting a single user to find a partner if they don't already have one, walks users through an introductory conversation about their home location and interests, focusing on the conference content and the messaging of the Singapore Economic Development Board.

As the brewing process begins, they are directed to the other end of the machine where their coffee is dispensed, and around to a side station where they receive a custom-printed cup sleeve with their name and their new connection's name, alongside the EDB logo.

The industrial design of the Coffee Connector was inspired by the beauty and function of a high-powered jet engine, and paid homage to coffee makers everywhere by showcasing the acts of grinding, boiling, steeping and extracting. The appealing design and exposed coffee brewing processes of the machine are an attention grabbing focal point in a room. Tellart worked with product design firm Octo to design and fabricate the machine, using high-end materials and craft to build a remarkable and highly functional object.

Beyond looking elegant, the machine had to make an incredible cup of coffee: details such as the right coffee beans and brewing process were paramount considerations. In order to do its job, the Coffee Connector had to be made robust and capable of existing as a standalone feature at many conferences. It is capable of brewing hundreds of cups of coffee without maintenance or intervention, and operates using a local network inside the machine that allows a central server to receive and send data between displays, sensors, liquid pumps, motors, the printhead, and more.

The Coffee Connector successfully attracts the attention of busy conference-goers, both creating value for users and emphasizing the messages of the Singapore EDB.

It made its debut appearance at The Economist Big Rethink Conference on March 13, 2014 in New York City. Featured in headlines ranging from the insightful ("The LinkedIn Of Coffee Machines," PSFK) to the ironic ("Machine That Makes You Mingle Before Coffee Is An Introvert Torture Device," PopSci), the Coffee Connector's reach extended far beyond the event itself and drew wide attention towards the Singapore EDB's mission and messages.

A valuable experience that facilitates classical elements of networking through technology. Very appropriate for the audience and environment.