Cardboard is a low-cost virtual reality (VR) viewer that transforms an ordinary smartphone into an immersive media headset. It arrives flat packed in a protective, mailable sleeve, and can be folded and assembled by the user in under a minute.

Cardboard is die cut from a single piece of cardboard—it's simple to manufacture industrially and easy for people to replicate and construct at home. The templates are freely available on the internet.

Cardboard's design is ingenious as it is frugal. A ring magnet on the left side creates a delightful sliding input that requires no physical or electronic connection to the phone. An NFC sticker launches the Cardboard app automatically when a device is inserted. A humble rubber band keeps the phone from sliding around.

Cardboard stands out among VR viewers—it's simple, clever, accessible, and fun to use. Cardboard is VR for everybody. 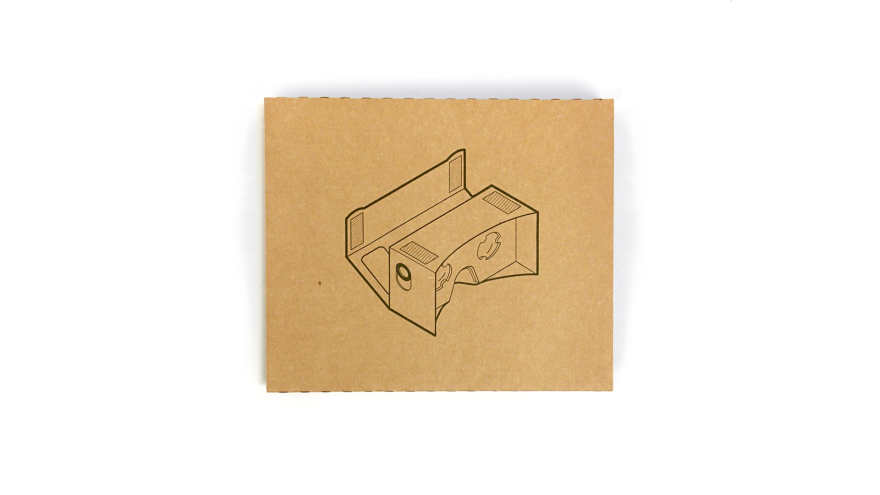 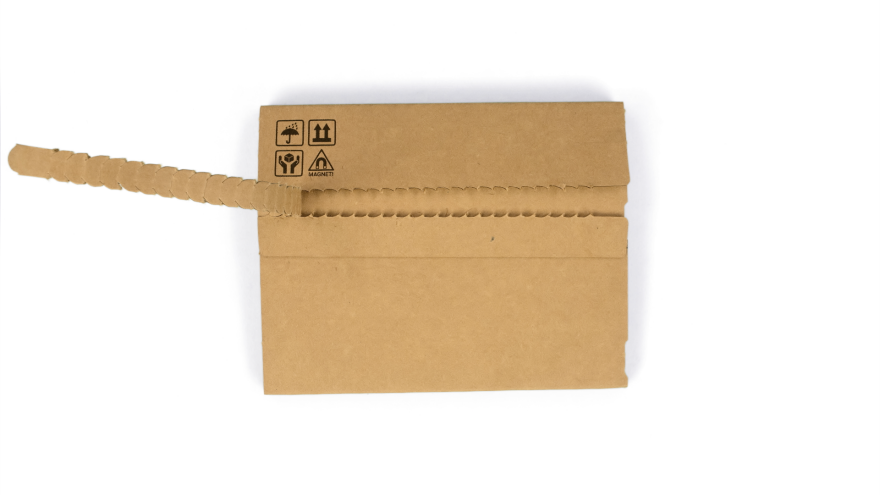 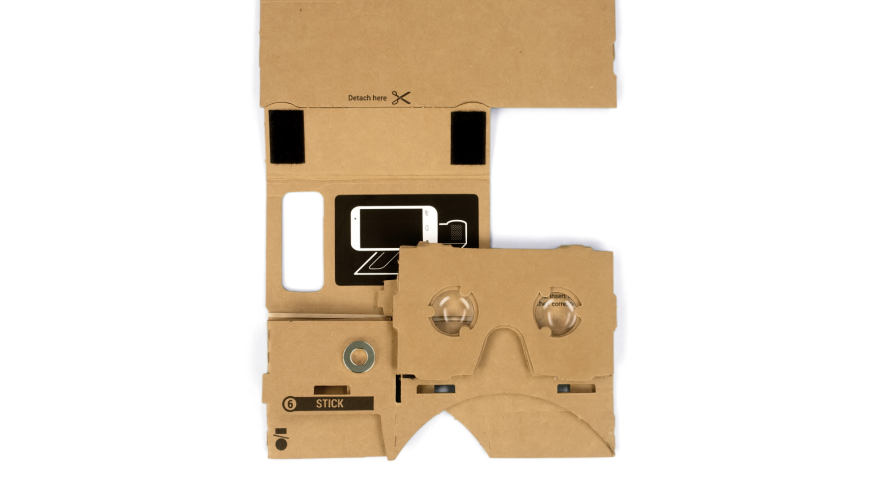 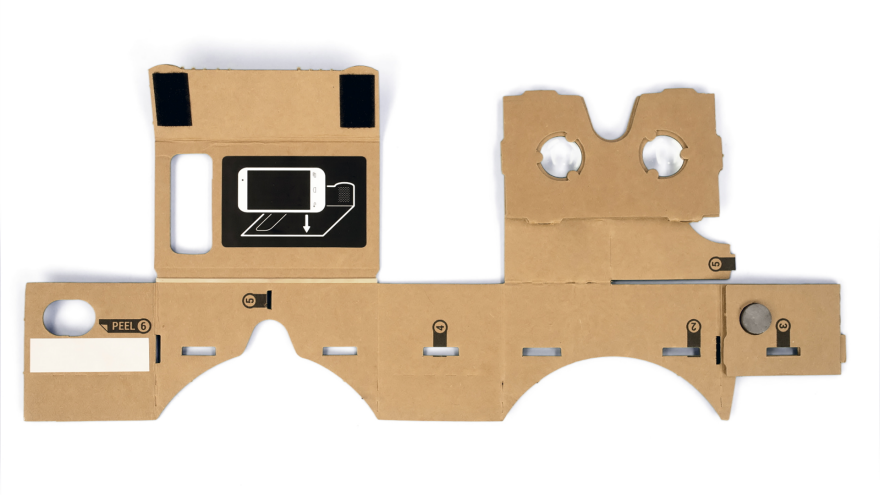 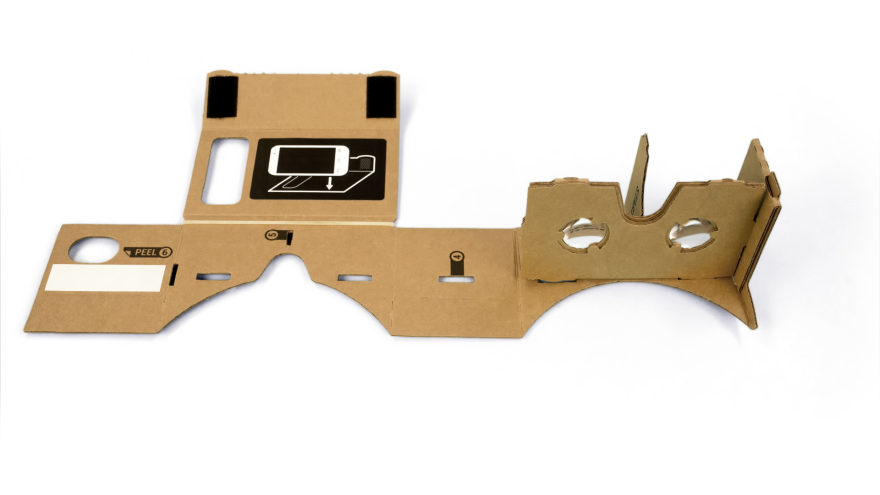 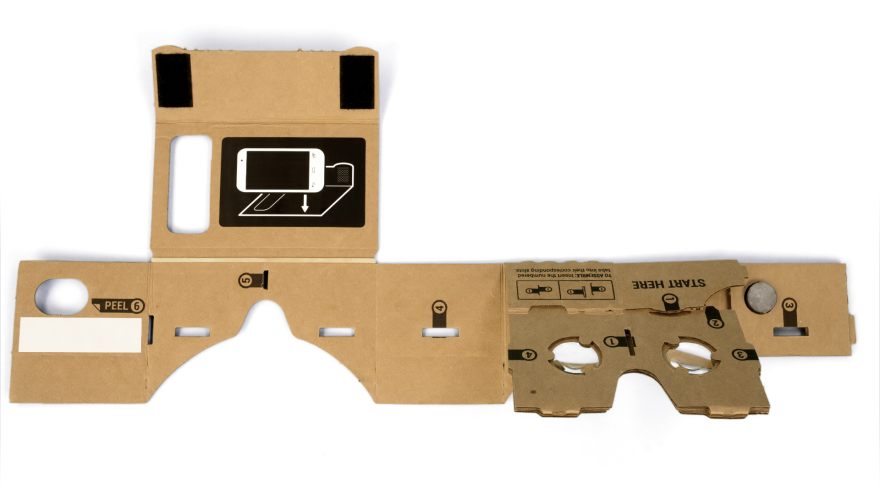 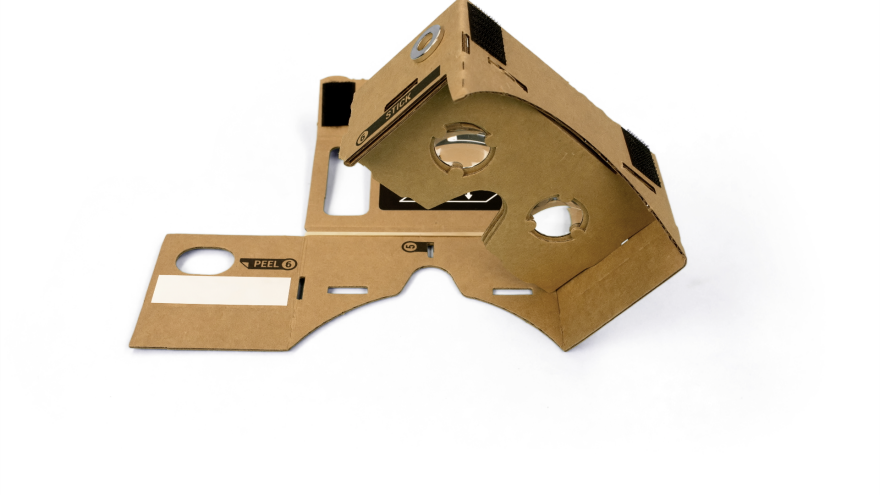 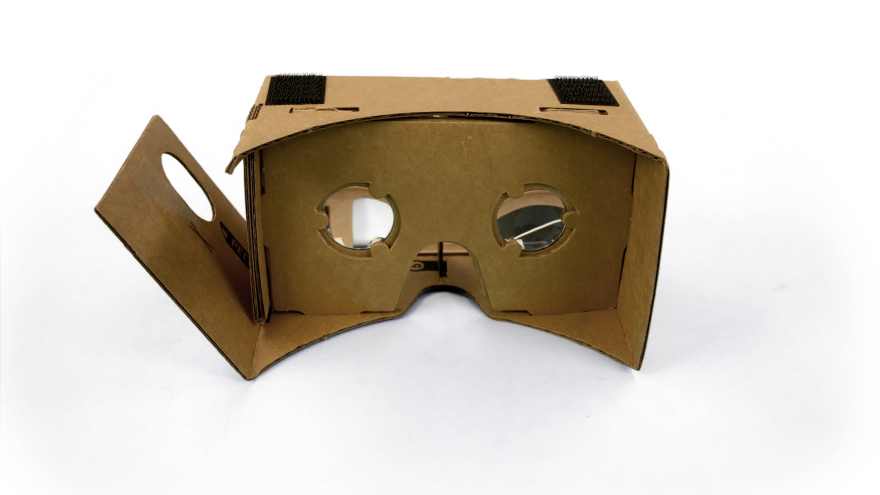 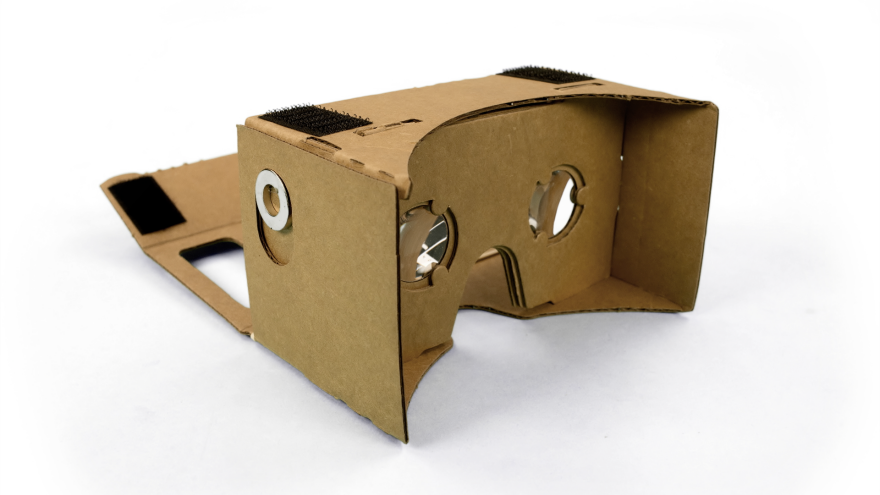 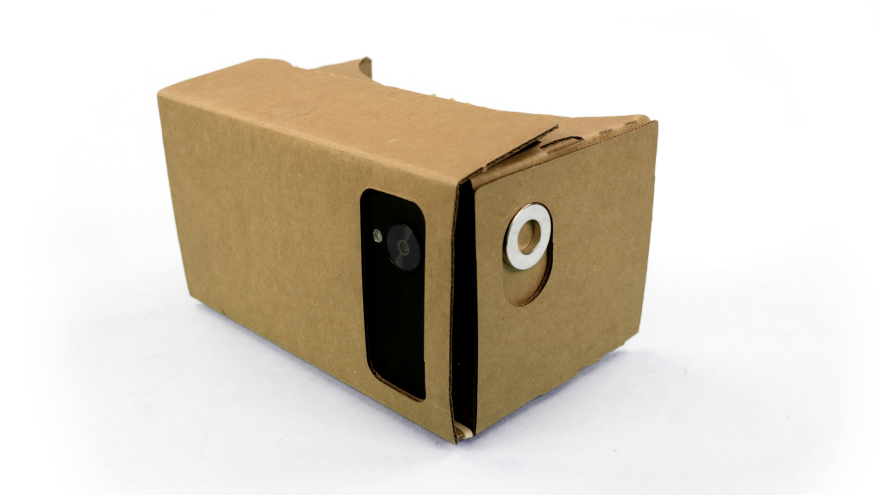 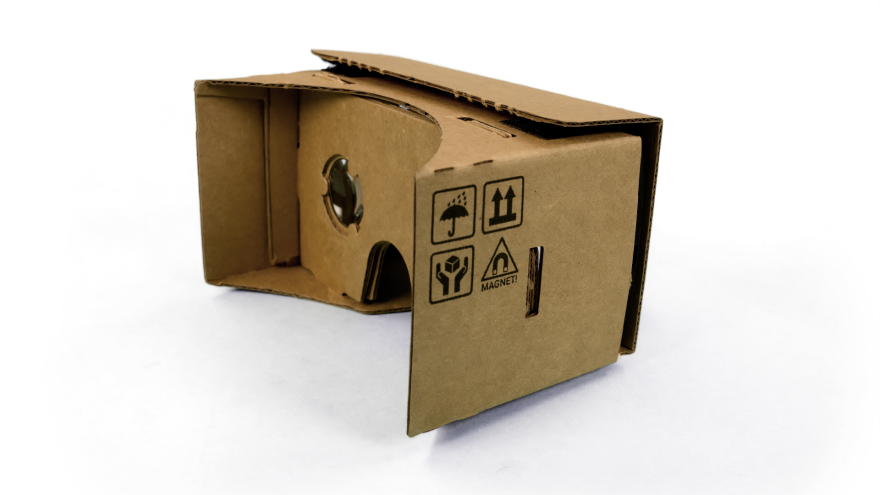 Virtual reality is the new hotness in tech circles; it's hard to go a week without an announcement about a new VR headset or platform from a game company, phone manufacturer, or on Kickstarter. Unfortunately, experiencing VR currently requires a significant investment of time and/or money. We designed Cardboard to cut through all the hype and allow anyone with a smartphone to immediately understand what all the fuss is about. We wanted to highlight the experience of immersive media, rather than the hardware required to experience it.

Ensuring that the maximum number of people can experience VR with the minimum amount of effort dictated all our design choices: the ingeniously magical magnet input that slides and springs back along its cutout path with viscerally satisfyingly physicality, the decision to make the viewer handheld rather than head-strapped, and even its spare and boxy aesthetic. It's also why in addition to creating a simple-to-manufacture viewer, we open-sourced its design and provided templates online to encourage people to build their own Cardboard viewers at home. The only part of the design that is not readily available in a person's home or at a local hardware store is the lenses, which can be ordered online for around $5. By making it easy and inexpensive to produce, adapt, and evolve Cardboard, we're encouraging people to try VR and developers to create VR experiences for those people to try.

Cardboard launched on June 25th, 2014 at Google I/O in San Francisco, where all attendees received one. As of this writing, over half a million Cardboards have been produced (by us and by third parties), the Cardboard Android app has been downloaded over 1 million times, and there are over fifty third-party applications developed for Cardboard, including Chris Milk's jaw-dropping VRSE app. Google doesn't distribute Cardboard directly but it is widely available from third-party manufacturers on the Internet.

We specifically built Cardboard for people who wouldn't otherwise experience virtual reality because of its technical complexity or its cost, but even seasoned VR developers wanting to quickly prototype VR experiences have found Cardboard useful and captivating. It's almost as fun to introduce other people to VR and watch their jaws drop in amazement as it is to experience it yourself, which Cardboard makes it simple to do. And kids love it.

Part of what has made Cardboard successful is the disparity between people's expectations upon first encountering it and the level of surprise and delight using it provokes. The viewer arrives flat packed and sealed in a cardboard envelope. After tearing it open and folding up the enclosed viewer by inserting numbered tabs in their corresponding slots, it's ready to use. Not only does flat packing make distribution and shipping much easier, but requiring the user to fold up the viewer also demystifies virtual reality and makes it approachable—there's nothing there but cardboard and a pair of plastic lenses—it really brings home the point that all the magic is in the user's phone.

Inserting an NFC-enabled smartphone in the viewer automatically launches the free Cardboard sample app (or prompts the user to install it). Once the app is running, the user can select from a variety of experiences intended to highlight VR's many possibilities: flying through 3D reconstructions of the world's most breathtaking landmarks, participating in an interactive cartoon movie, touring Versailles, watching Youtube videos on an immense screen, and examining detailed 3D objects from every angle. Users select an experience by looking around a launcher view until the desired experience is highlighted, then selecting it by pulling down and releasing the magnet input on the viewer's left side.

Making using Cardboard delightful required careful interaction design. Because we didn't want people disappearing into virtual worlds, we designed Cardboard to encourage bite-sized interactions—think opera glasses or a View-Master toy. We wanted to make it easy for users to pass the viewer to other people, sharing their discoveries and delight. So there's no head strap.

Making the viewer feel like an approachable DIY project without requiring additional tools or components also posed significant challenges. To simplify assembly, the lenses, magnets, velcro, tape strips, and NFC stickers were pre-assembled at the factory so that users had only to tear open the enclosing envelope and fold up a single piece of cardboard without worrying about adhesives or losable pieces.

The biggest challenge by far was providing reliable input to the phone without mechanical coupling or embedded electronics. We were very pleased with our eventual solution: a disk magnet glued to the inside of the viewer and a ring magnet held onto the outside by magnetic attraction. Inserting a finger into the ring and sliding it past the other magnet not only produces a satisfying haptic effect, but it also affects the phone's compass in a predictable way that software can interpret as a "click."

Finally, by relying on an existing device for all its smarts, we were able to make Cardboard almost entirely recyclable. Working with a local packaging factory, we designed Cardboard to be printed and cut from single sheets of cardboard on standard corrugated box presses. This allowed us to go from an initial laser cut prototype to a production run of 10,000 in less than eight weeks. Though Cardboard was intended as a disposable showcase of VR's potential, we've found that users keep their Cardboards long after frequent use and rough handling has left them creased and grease-stained. Cardboard boasts among the lowest environmental impact and the most inclusive and widest ranging user impact of any available VR viewer!

What we really liked about this is that it really democratizes the access to a virtual reality and we think it opens up totally new possibilities for both interaction and content creation.