Tackling the issue of residents of bushfire risk communities rarely setting up adequate plans, if at all, directed my research towards directly engaging and empowering households with new technologies. The proposed system consists of three elements; an in-home display that acts as a smart smoke alarm & bushfire alert system, designed to encourage regular use through secondary features; a smartphone application that facilitates neighbourly and community wide fire readiness discussions, and a purpose built weather station that both provides localised weather information and acts as an information relay that feeds data and warnings to the in-home displays.


Firefly is a smartphone application intended to centralise every facet of bushfire management information, while designed to be accessible to users of all skill levels. Through a largely pictographic layered interface the user has access to; detailed local weather information, bushfire planning information (normally accessed in print), fire warnings, local event calendars, emergency services, a forum, and most critically, a formalised adaptation of the antiquated 'phone trees' concept used widely by residents in emergencies. Digitising this system will massively reduce the chaos of telephone communication that occurs in emergency situations, by providing a purpose built messaging system.

Rather than rely on climate information from remotely located state sources, this low cost weather station provides localised data to residents, aiming to instil confidence that reported climate information like wind speed and direction is coming from a relevant source. It also acts as the data relay between the CFA (Country Fire Authority of Victoria, Australia) and the in-home displays, working on the AX.25 packet radio protocol that transfers data over FM frequencies, which leaves little risk of signals being knocked out by heavy smoke. Coupled with solar power and duplications throughout a community, it provides fail safe communication with the in-home displays.


The in-home display's primary function is to enable the CFA to send emergency warnings directly into the homes of subscribing residents, and to allow them to respond with a simple 'stay' or 'go' signal. Designed to be prominently displayed in the home, it also acts as a clock radio with weather updates. These functions are intended to instil confidence in users, preventing it from being considered a nuisance like current smoke alarms. By encouraging use outside of fire periods, the display acts as a subtle, constant reminder of the need to be prepared for the eventuality of bushfire.


Bushfires are indiscriminate in their actions, and so too must be any emergency services information sent out to residents. With this is in mind, both the in-home display and the phone application were designed to be not only simple to use, but easy to interpret for anyone of any age or background. The display's corners pivot on mechanical switches, with visual soft-keys indicating function, allowing depth through a simple interface. For both devices a study of pictograms was performed to develop a series of symbols for not just fires and emergencies, but also map legends and weather iconography. 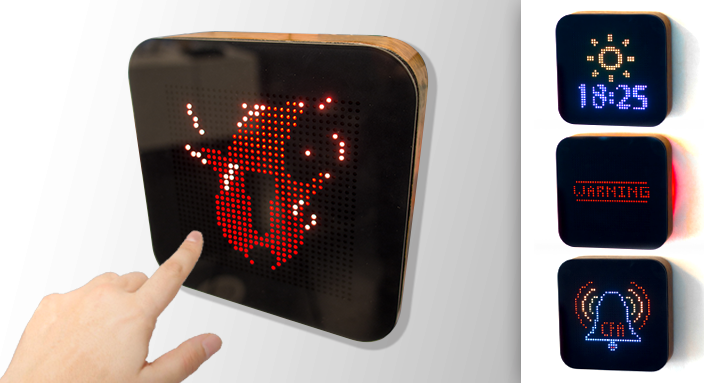 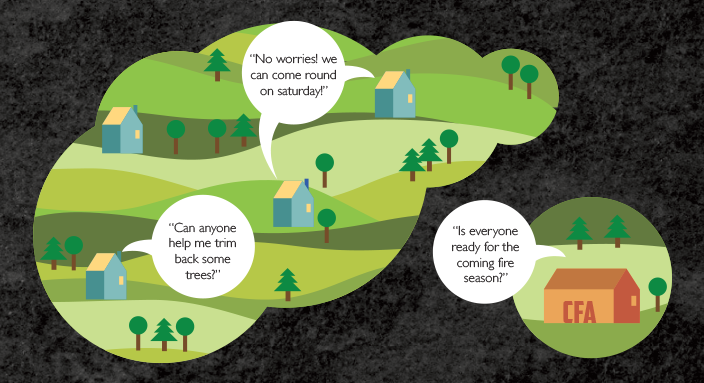 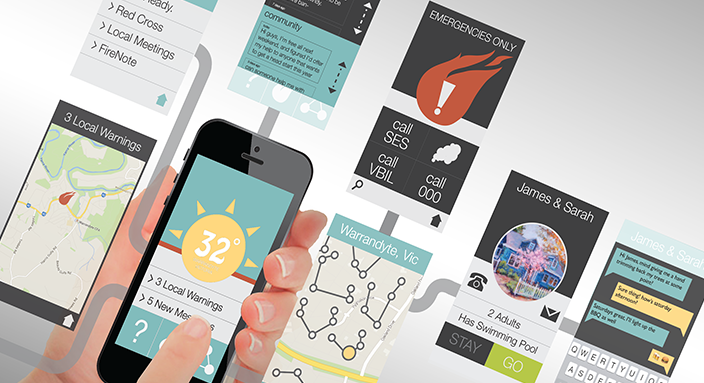 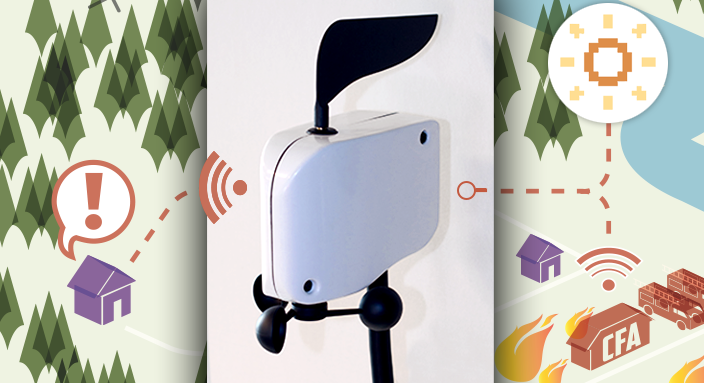 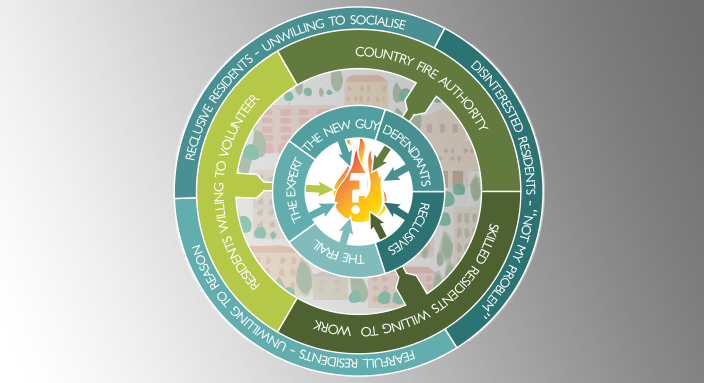 For many people 'the home' acts as an anchor point in life and a safe haven from external troubles, and the concept of losing it and all it contains to natural disaster is so devastating that they avoid planning for these scenarios.

It's well established that people living in bushfire prone areas are well aware of the potential for risk, and are aware that it is their own responsibility to choose between preparing for and then staying to defend their properties, or choosing to evacuate themselves and their belongings in advance of immediate danger. Unfortunately these choices are perceived by many as being equally poor, and result in a significant number of people either delaying their choice or reconsidering options when directly confronted by fire.

Current methodologies designed to assist residents present a disconnection between the planning and execution of bushfire preparations, where the development of a bushfire plan is a complex and often abstract task of weighing up risks and often unknowable eventualities, triggers and contingencies, and in many ways may be too heavy a burden to require civilians to perform independently. These elements contribute to the indecision of at-risk people who are unable to choose between the rock and hard place that is the national 'stay or go' policy. In their execution, these plans often result in inexperienced people determining when plan triggers should occur relative to perceptions of local conditions, and in deciding on appropriate actions to take. A delay in such decisions can lead to tragic consequences but the most widespread result is that people in a period of significant stress either do not leave themselves enough time to properly evacuate their homes and leave behind important possessions, or choose to defend their homes without adequate preparation. The aim of Setting Communities Alight is to tackle this indecision through the development of a tool to assist communities in developing social networks, where those with more experience or inclination for action are able to assist, encourage and motivate others in their area to adequately prepare themselves for bushfire. The form that this tool takes has been influenced through collaboration with relevant stakeholders, including those who have been affected by fires, those who are fortunate enough to have avoided it, and with relevant fire management agencies. This dialogue was in the form of structured interviews and user experience testing.

Through this process I have developed a product service system consisting of an in-home display that acts as a fire notification system, hidden behind an aesthetic intended to appeal to a wide audience. The information it displays is served by a locally installed weather station that is able to provide extremely localised weather information and acts as an information relay. To tie the system together a smartphone application facilitates communication between residents.

While it is important that the end users of this tool are willing to place their trust in it, their influence in its development has been limited to initial interpretations and feelings towards the idea of a community focused tool, and user testing towards completion. Co-creation was not used in the design process for the same reason that I do not want to be limited by the stipulations of the 'stay or 'go' policy, as I predicted that I would run into the same problems of indecision and insecurity plaguing the current systems that are in place.

I also propose that design thinking is an incredibly important tool in the development of systems that assist and enable people in making and planning for decisions that have such potential to go wrong. This is where many current systems that are limited by potential for political liability fail their users by refusing to address the real world concerns and multiple realities of circumstance and situation seen in the year round effects that bushfires have on people's lives. In line with this idea, the development stage led me to develop a system that is focused on encouraging planning and preparedness. This is a large point of difference to other fire projects which are focused either specifically on providing tools for planning, or providing fire fighting and evacuation equipment.

Prior to the development of the physical components that make up the project a materials and technology study was performed. During this stage I developed a strong understanding of the techniques and processes I would be using, as well as a familiarity with the electrical components that would make everything tick. Throughout the making process I made every effort to demonstrate as many of my skills as I could, and to develop a working understanding of a range of new ones. The development of the system involved graphic and interface work in the form of the smartphone app, digital work in the form of the coding and animations required for the arduino powered in-home display, and physical model making that included 3d printing, CNC milling, timber work, vacuum forming, laser cutting and more, to create the working weather station and in-home display.

My hypotheses have been validated through a combination of user experience testing in the form of surveys coupled with laddered interviews and demonstrations of prototypes. This process has indicated strong support and approval from residents, who seemed extremely eager to see new technologies that would make their lives easier and safer. The testing has also indicated that many residents have actively sought better sources of information and for better tools to enable neighbourly communication in fire events.

Conversations with the CFA have shown a recognition of the accuracy and conciseness of the project problem statement and goals. Although the project will require a significant amount of extra work before a feasible outcome can be reached, the testing has strongly indicated that it is a huge step in the right direction.