The Royal Danish Academy of Fine Arts
Schools of Architecture, Design and Conservation

The prostheses is designed to support children in specific situations such as sports.

The affected children are able to deal with most everyday tasks. Existing prostheses are highly expensive and often include poor aesthetics and functionality. For these reasons, prostheses are often rejected. However, prostheses are required for certain activities like eating, biking and drawing.
The printed prostheses are made for biking and grip to the bike steering with a simple, reliable mechanism.

Rapid manufactured prostheses, which includes 3D printed, moulded and laser cut prostheses do not yet exist on the market in this form since they include recent production methods. However, these methods provide significant benefits. The produced devices are individually adaptable in form and aesthetical appearance. In contrast to existing prostheses, they are functionally and aesthetically pleasant. 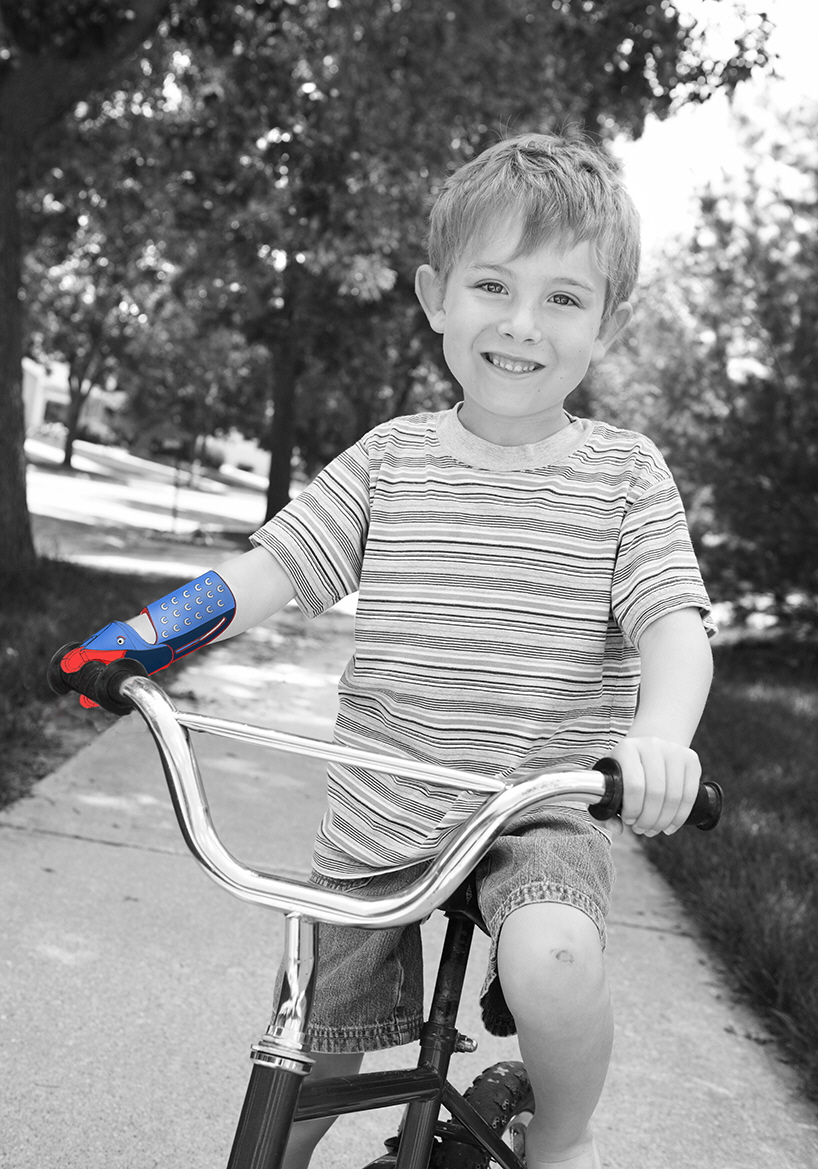 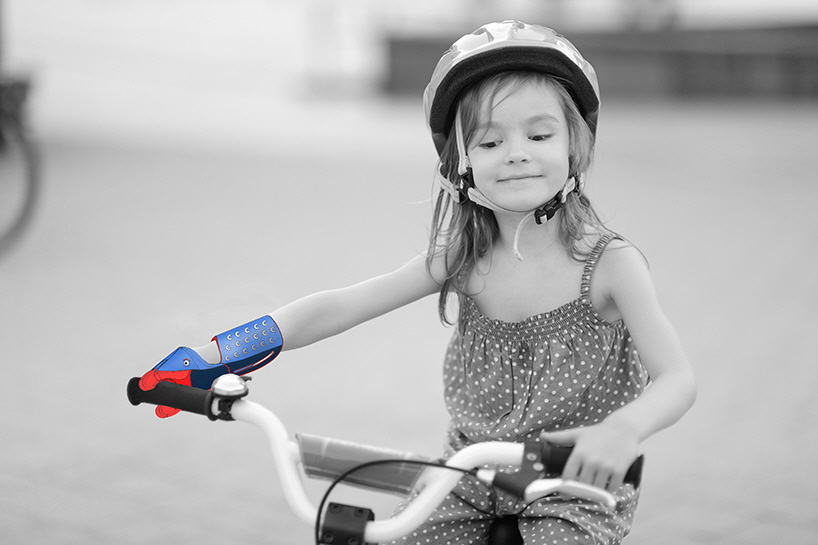 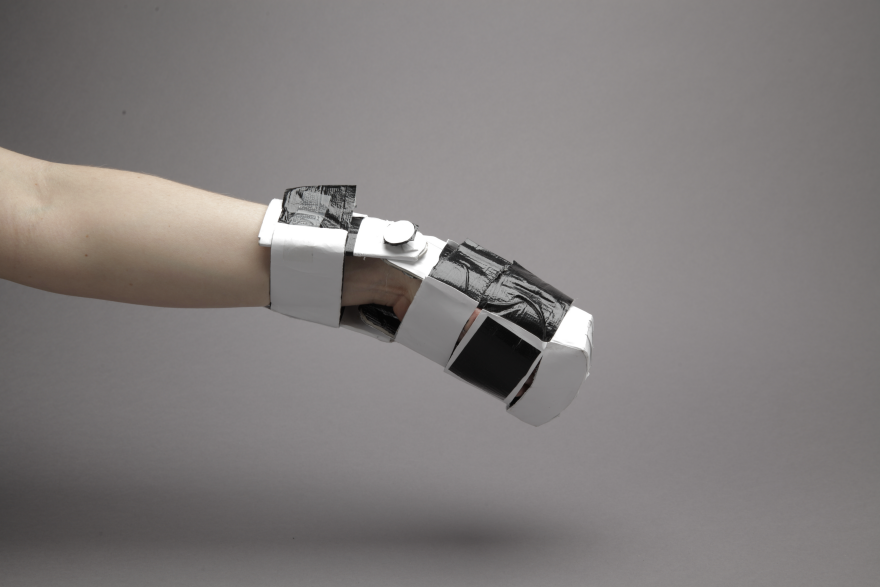 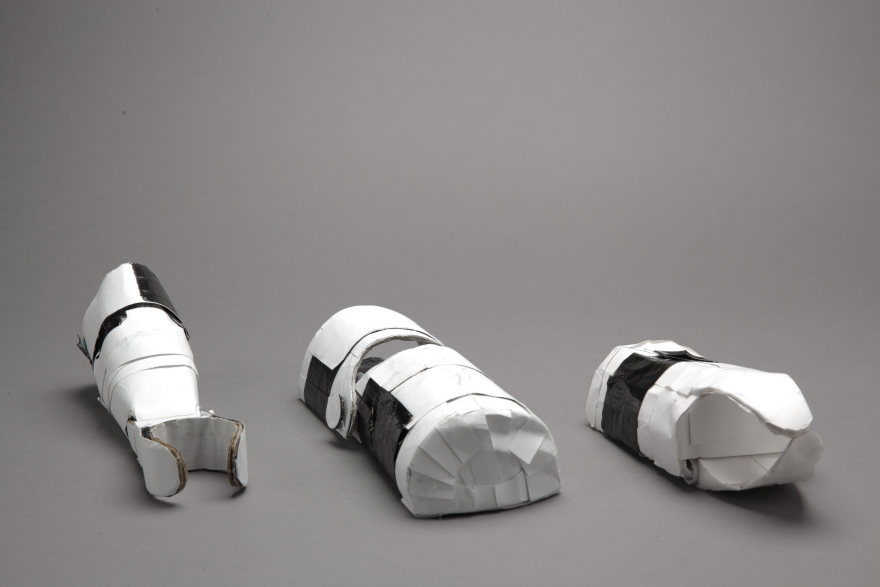 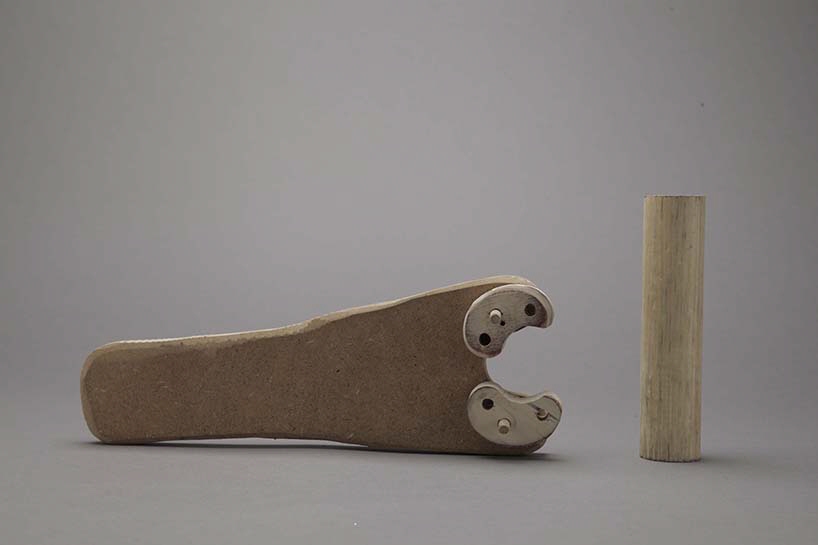 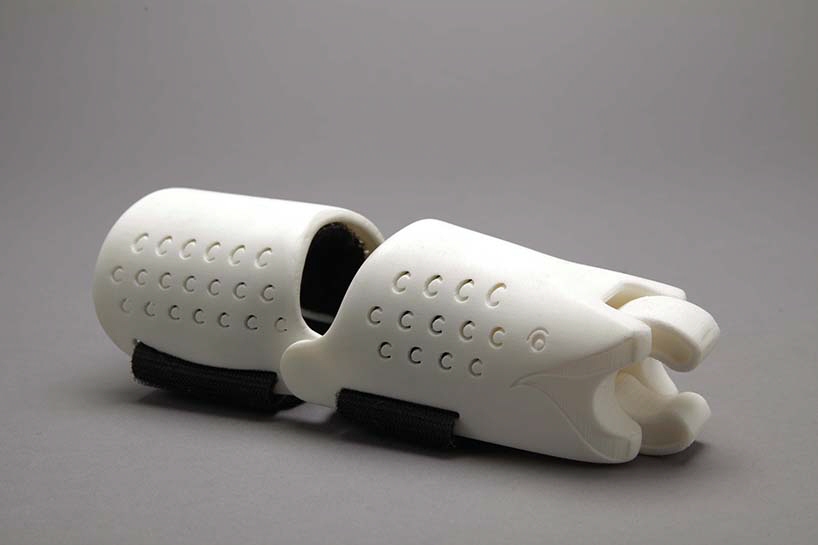 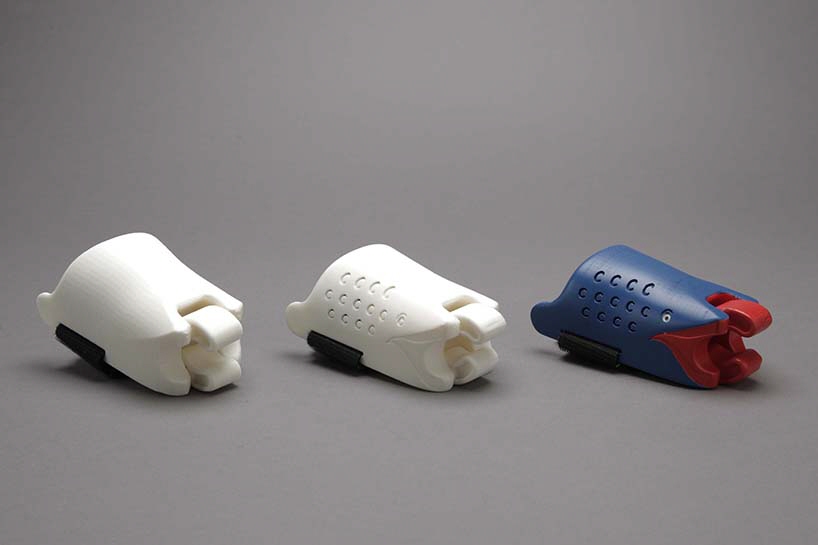 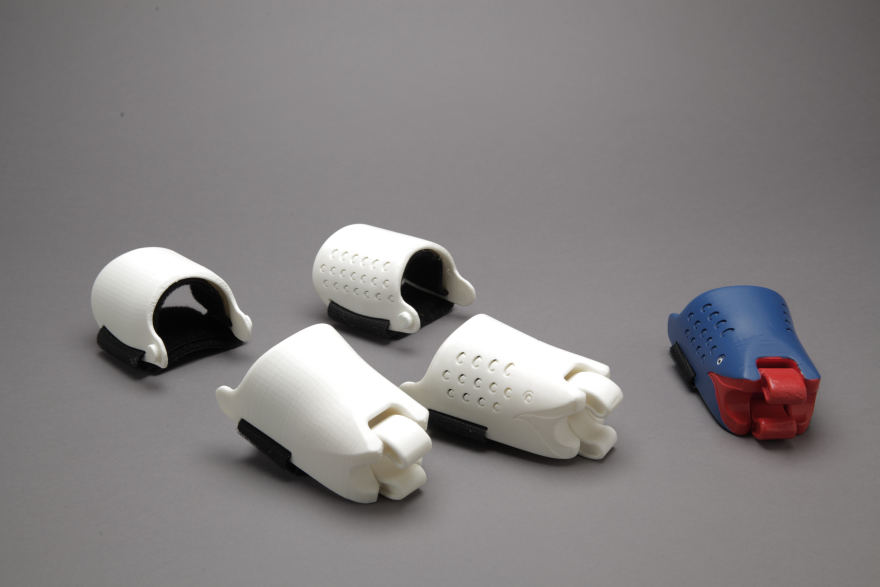 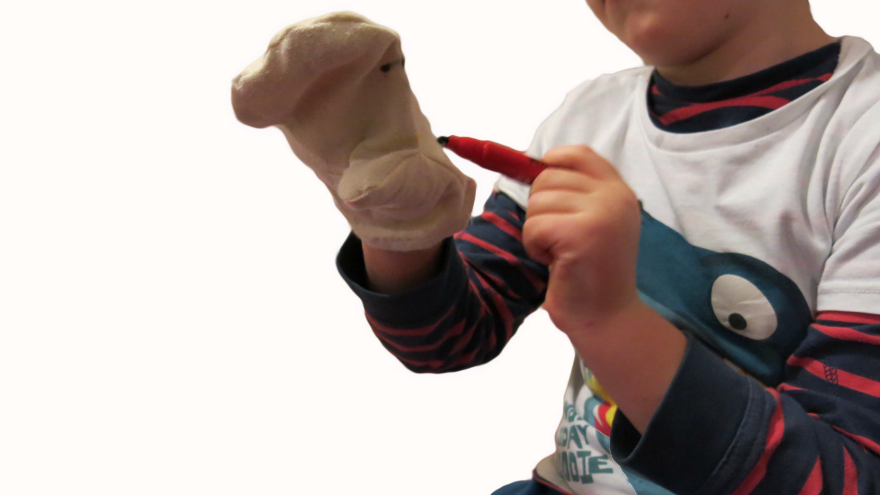 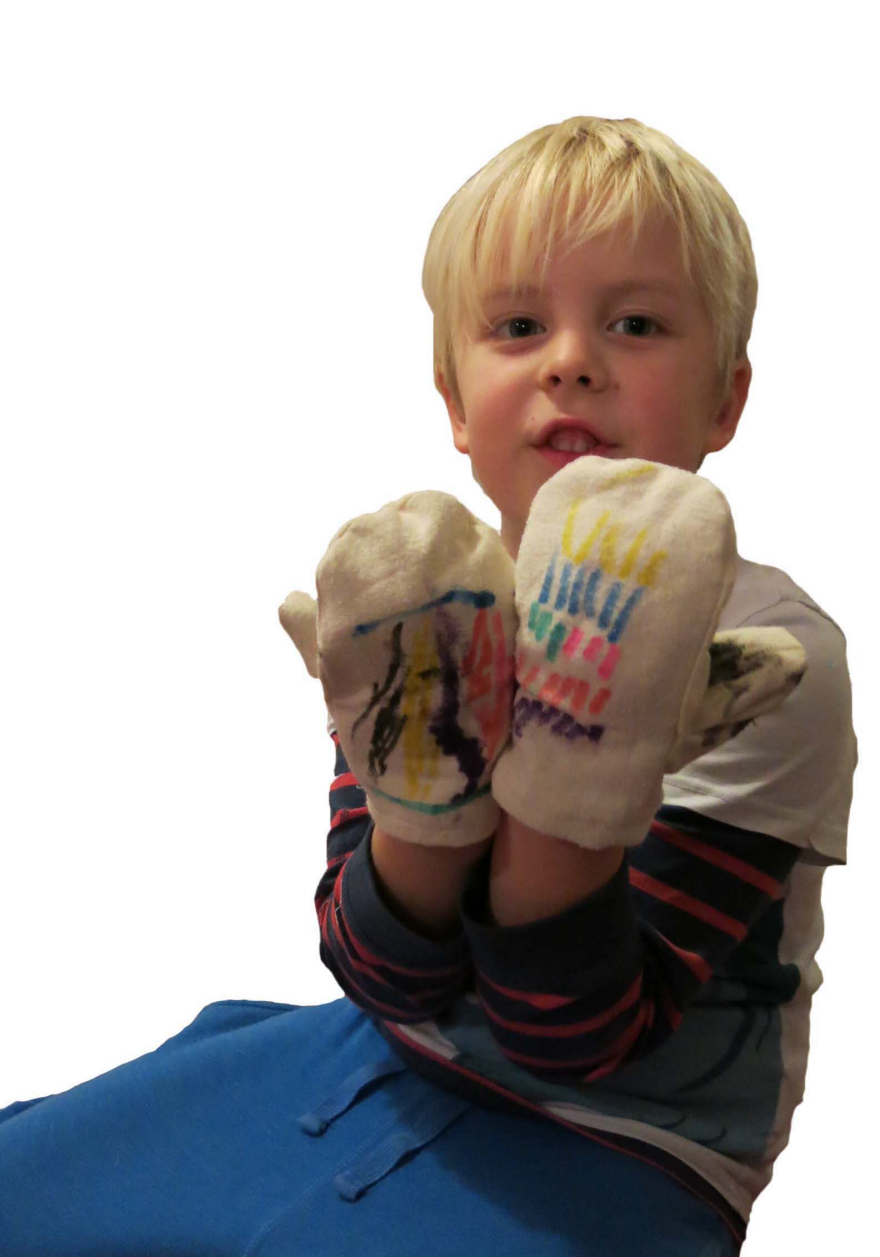 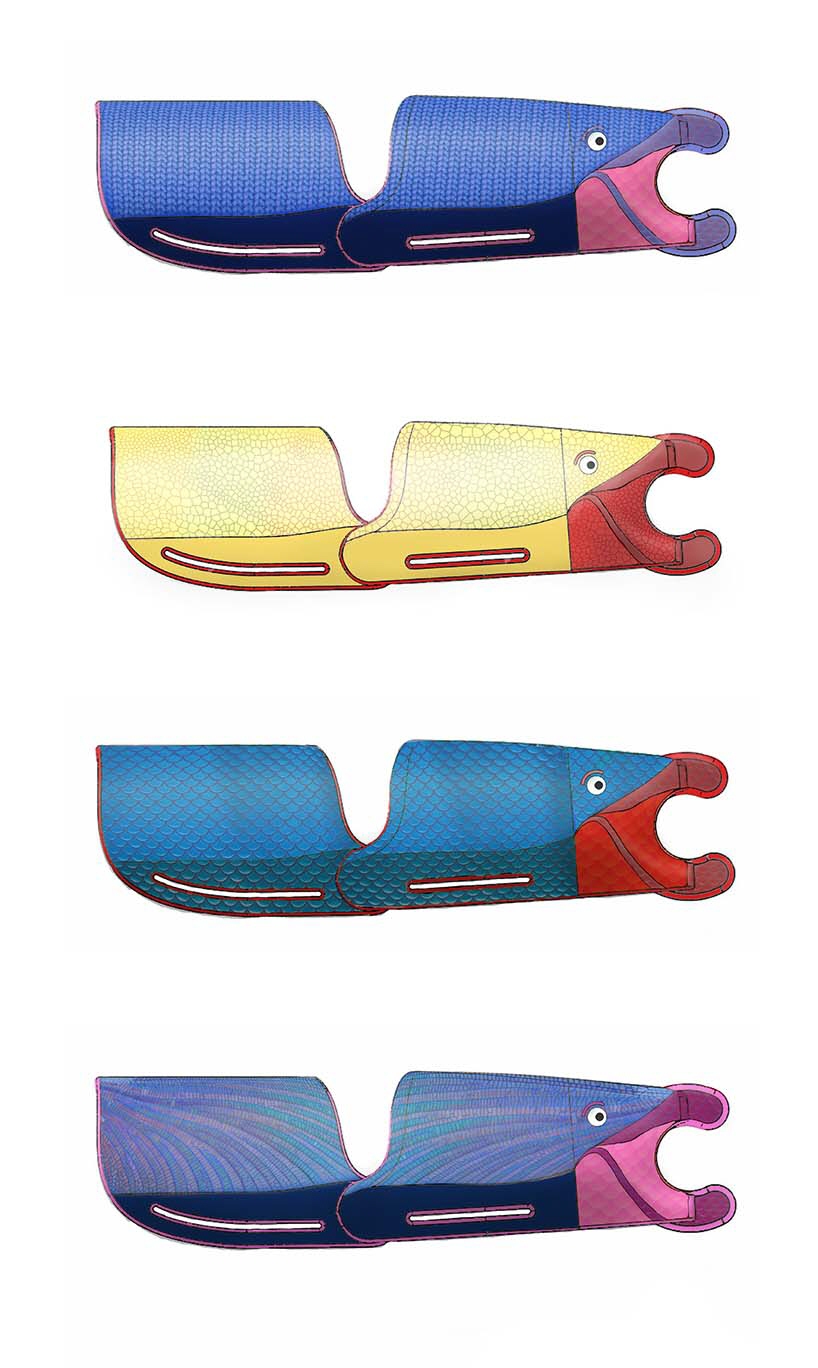 During my research for a project about prostheses and the new human body at the Royal Danish Academy ( KADK ) I found out about prosthetics for children with upper limb loss or congenital disorders. These children often do not get prostheses until they reach a certain age or not at all, due to very high cost. Due to very complicated production and the rapid growth of young children, many families even in developed countries can not afford high tech prostheses.
But even if, children often refuse to use their prostheses. The rejection and non – acceptance of hand prostheses, manly caused by poor aesthetics, is obviously a highly interesting point for a designer.

Many of the affected children do not benefit from prostheses during their daily life tasks in a technical way, as they have learned to solve most problems with their stump or remaining hand. Children find their prosthesis useful for specific activities, rather than for daily activities in general.

However, several surveys in the medical area show evidence that an upper limb amputation or loss causes severe functional disability and lowers the patient's self body image, with great psychological implications. In comparison to able-bodied peers, withdrawn behaviour is significantly higher in children with loss of upper limb, social competence tends to be significantly lower, so do social activities. Children who are not using their prostheses show significantly more delinquent behaviour problems than fulltime users. A lower score on social functioning is especially shown in children aged 13 to 14 years.
In the US, there are 32 500 children under 21 years that suffer from major paediatric amputation, with 5525 new cases each year, of which 3315 are congenital.

For these reasons, I decided to develop a low cost, low tech, activity specific prostheses.

During the design process, I had to deal with diverse challenges. One main problem was of course to reach concerned children and their family. This was obviously a very important step in order to keep the projects relevance and accuracy.

As soon as my concepts were developed, I contacted families with children with upper limb losses. This proved to be quiet difficult, however, I reached enough concerned children to help me confirm my assumptions.

To integrate children into the aesthetical design process and the decisions being made concerning the appearance of the device, white gloves were given to young children between 3 and 7 years. The children were asked to colour the gloves with fabric pencil. Ideas and concepts such as designing animal like prostheses and using many different colours were generated.

Working on the GREIF, my goal was to design a prosthetic device for children of a certain age with upper limb loss or congenital disorder.?The device was supposed to be affordable for a large group, to be aesthetically pleasant and functional. Due to the results of my research, it was designed for a specific situation, such as riding a bike, drawing or to serve as an aesthetic replacement. My point of view as a designer allowed me to recognize that existing prostheses can be revolutionized using new and innovative technology.

After some weeks of research, including interviews with concerned children, I started to build rough prototypes in wood and paper to define functions and measurements. The functional models were tested and developed further and finally first prototypes were 3D printed. While developing the 3D printed models, I kept in mind to keep the prostheses individually adaptable in size and form. After further successful testing, colour concepts were developed.

The impact of a prostheses for a child can be enormous. Not only can it allow a child to join its peers doing sports, it also advances the social integration. Being able to offer a child not only an affordable prostheses but the chance to bike and join its friends is a great chance.

I am planning to advert my project as an open design on several platforms. This way, I hope it can be improved and be brought to a larger group of users.

Until now, GREIF has been of a great success and will be shown on the Venture Lambrate in Milan 2015.